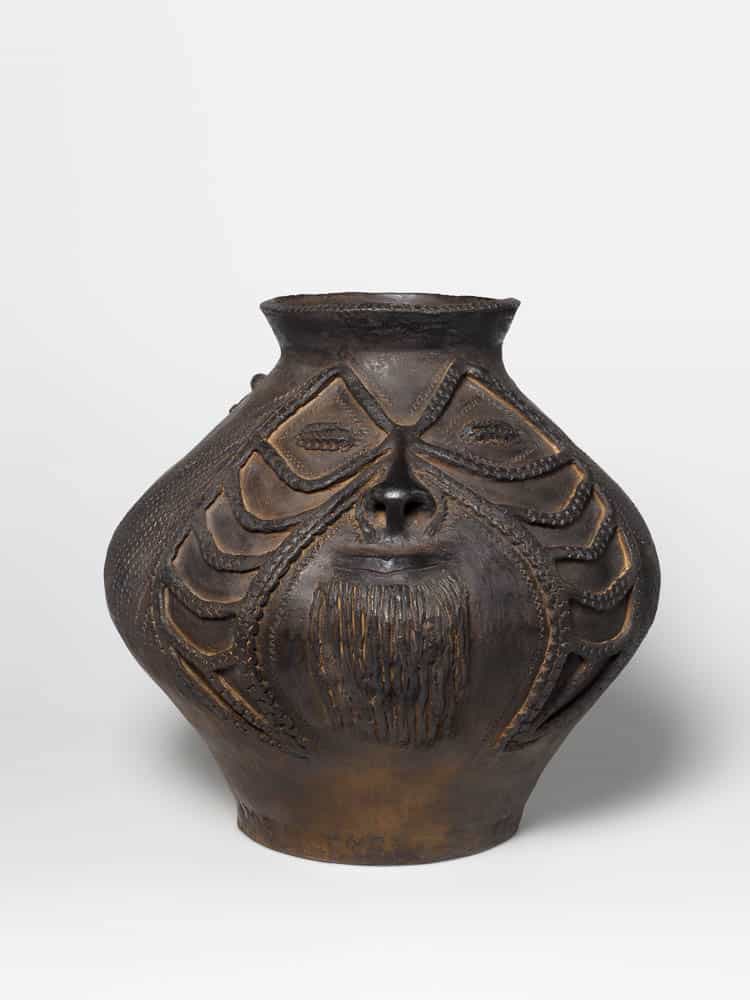 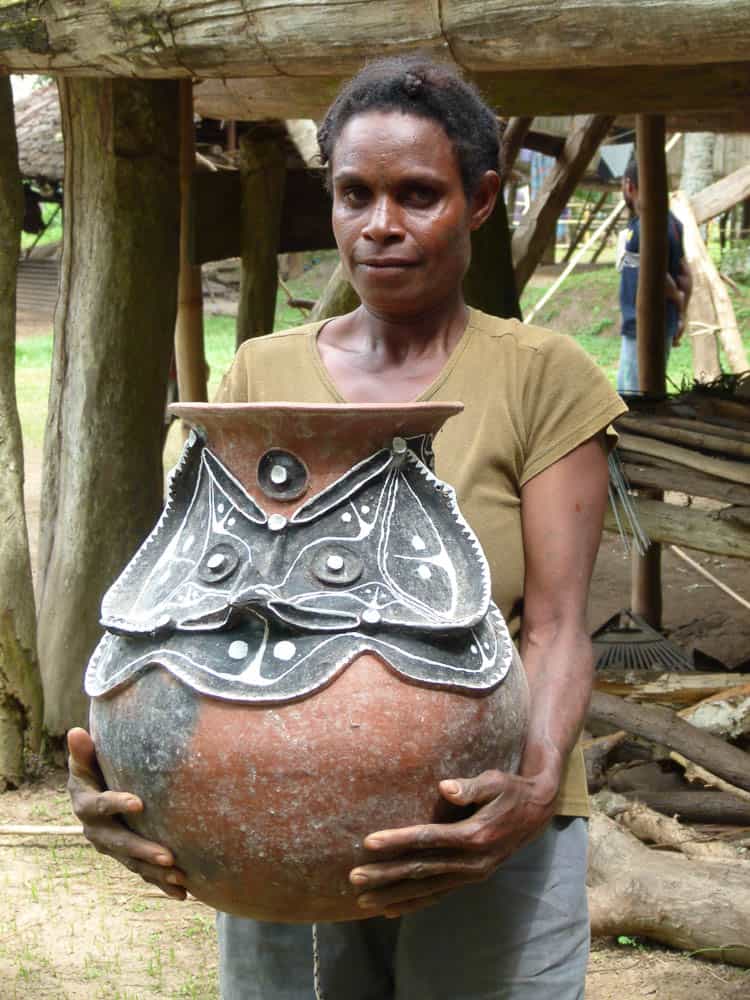 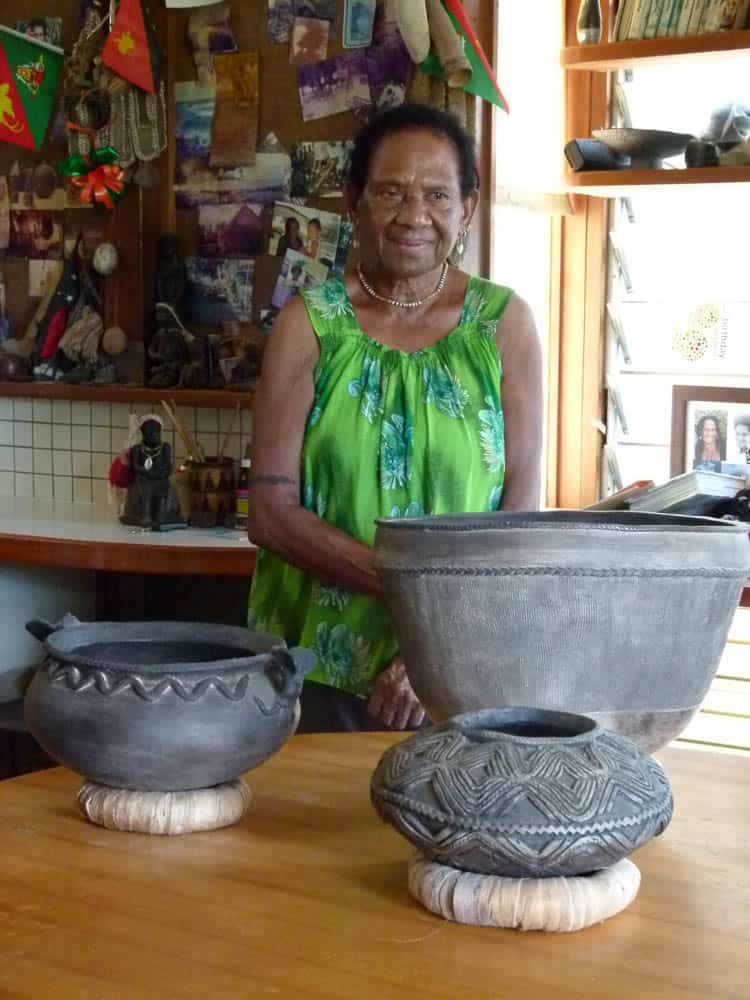 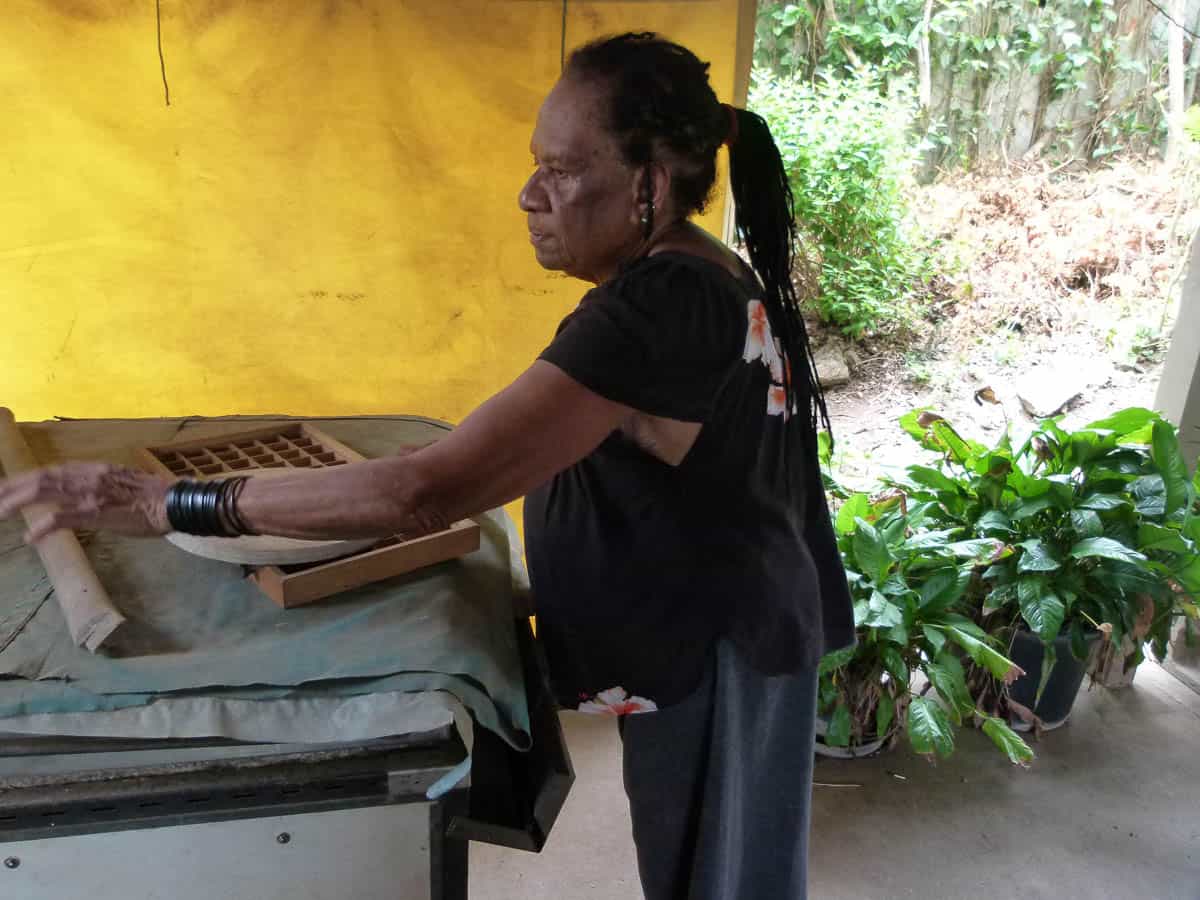 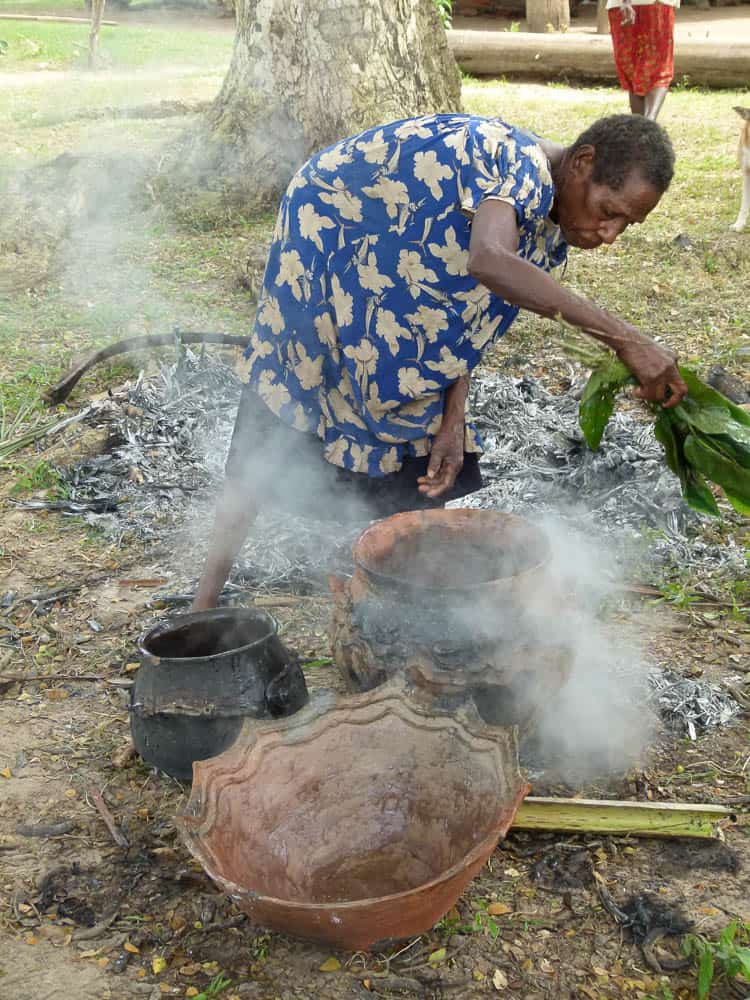 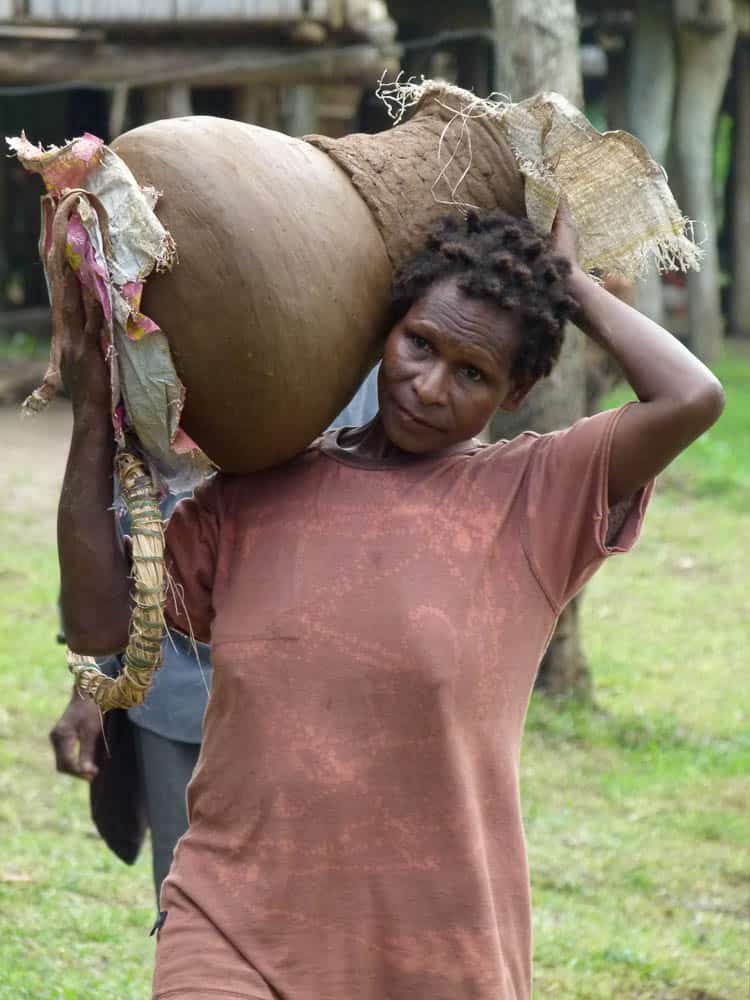 In 2011 I made my first trip to Papua New Guinea, travelling first to East New Britain and then on to the East Sepik where we boarded a canoe to voyage along the Sepik River and her tributaries. I was travelling with a colleague from the Queensland Art Gallery l Gallery of Modern Art and architect Martin Fowler to undertake research into the spectacular men’s spirit houses found in this part of PNG for the Gallery’s 7th Asia Pacific Triennial of Contemporary Art (APT7). These structures are built and decorated entirely by men and all of our discussions were led by men in the sanctity of their space. While women were around, often glimpsed carrying large beautifully constructed baskets and bilum (string bags) with firewood and garden produce, we had very little opportunity to establish any real contact or conversation with them. That was until we moved down to the lower Sepik and made a trip into Aibom to visit the celebrated potters there. Here women were highly visible and obviously paramount, their knowledge and creativity much valued.

A part of the Chambri Lakes, the village of Aibom is known for the distinctive Ao (Sago storage) pots that the women form from local clays. These tall sensual forms were traditionally decorated by men with the faces of mythical beings to be used as functional items in the home or exchanged with other cultural groups for sago and other food. Today Aibom women not only create, but often also ornament these vessels using traditional methods of hand-coiling and applied “face” decoration. The pots are fired at low temperatures by the older women who understand the process and words required to ensure a successful outcome.

Despite a number of return trips to PNG and the Sepik, for me, the  trip to Aibom remains as a very distinct and warm memory of the incredible strength and grace of their women. It is also an experience I think of, when I am with Oro Province artist Mary Gole.  Mary and I first met in a restaurant overlooking the airport in Port Moresby just before our team flew to the Sepik on that first 2011 trip. On the way back to Brisbane, Martin, Michael and I made a quick visit to Mary’s home in Holhola to see her work and studio.  We left with three pots which Mary had created a number of years earlier when her eyesight had been stronger. These early works were inspired by traditional forms created in a various parts of Papua New Guinea and discovered by Mary in the lavishly illustrated The Traditional Pottery of  Papua New Guinea compiled by art historian Patricia May and the late Margaret Tuckson. While Mary continues to openly attribute the inspiration for much of her work to the diversity of forms that she has discovered in the pages of this text, her practice is firmly grounded in methods of hand coiling clay that she remembers watching her Orokavian mother practice when she was a child. Mary has also travelled extensively throughout the Papua New Guinea researching different techniques and forms. Her celebrated “Face pots” for example respond to her own trips to Aibom and  experiences of working with potters creating the distinctive Ao (sago storage) pots there.  The faces of mythical beings found decorating the Aibom pots are, however, reworked by Gole to depict the face of a woman, tattooed with designs consistent with Mary’s Orokavian traditions. Mary describes these pots as a homage to Papua New Guinean women and their labour.

A concern with women’s lives in Papua New Guinea is also the motivation for the creation of a group of small figurines Mary has created over the past decade. Predominantly female, these sculptures record the postures of everyday life that she encounters in Port Moresby. One group titled Susu mama (breastfeeding mother) seeks to draw attention to the importance and beauty of the nursing mother at a time when increasingly large numbers of women were being dissuaded from this practice for fear of showing their breasts.

On a 2014 trip to Port Moresby, Mary revealed a new body of work including two new large, face pots. Joining a recent example of the iconic “Face pot of woman” that marked Mary’s early career was a wonderful pot decorated for the first time with the face of bearded man. In subsequent discussions about these works, Mary disclosed that the subject is the current Oro Province Governor Gary Juffa, who lived with Mary and her husband David during his schooling years, whilst his mother worked.

A selection of over fourteen pots by Gole and a small group from Aibom will feature as part of a special grouping of works looking at the strength of women in Papua New Guinea in the upcoming QAGOMA exhibition No 1 Neighbour: Art in Papua New Guinea 1966-2016. 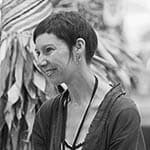 Ruth McDougall is the Curator of Pacific Art at the Queensland Art Gallery, currently curating the exhibition No 1 Neighbour: Art in Papua New Guinea 1966-2016. As part of the Curatorial team for the 9th Asia Pacific Triennial of Contemporary Art she curated the exhibition Threads: Contemporary textiles and the Social Fabric (2011), and was part of the Curatorial team for the 8th and 7th Triennials as well. With a Master’s Degree in Visual Arts from Goldsmiths College, University of London, McDougall was a recipient of the inaugural round of Samstag Visual Arts Scholarships (1994) and undertook a Churchill Fellowship in 2013.

Claudia Fernandez: Ceremonia
Rainbow Serpent art from Pormpuraaw
Sodeisha: Object ceramics from Kyoto to Australia 🇯🇵
Objects for today from the shards of the past: Possibilities for ceramicists in ...
Castlemaine Currency: Towards a grounded economy
Woven walls, threaded horizons: Traditional architecture in the modern urban fab...
Letting go design in Dharavi
Deep and shallow time meet in Jingdezhen