Bilums and bilas: From bags to jewels in PNG 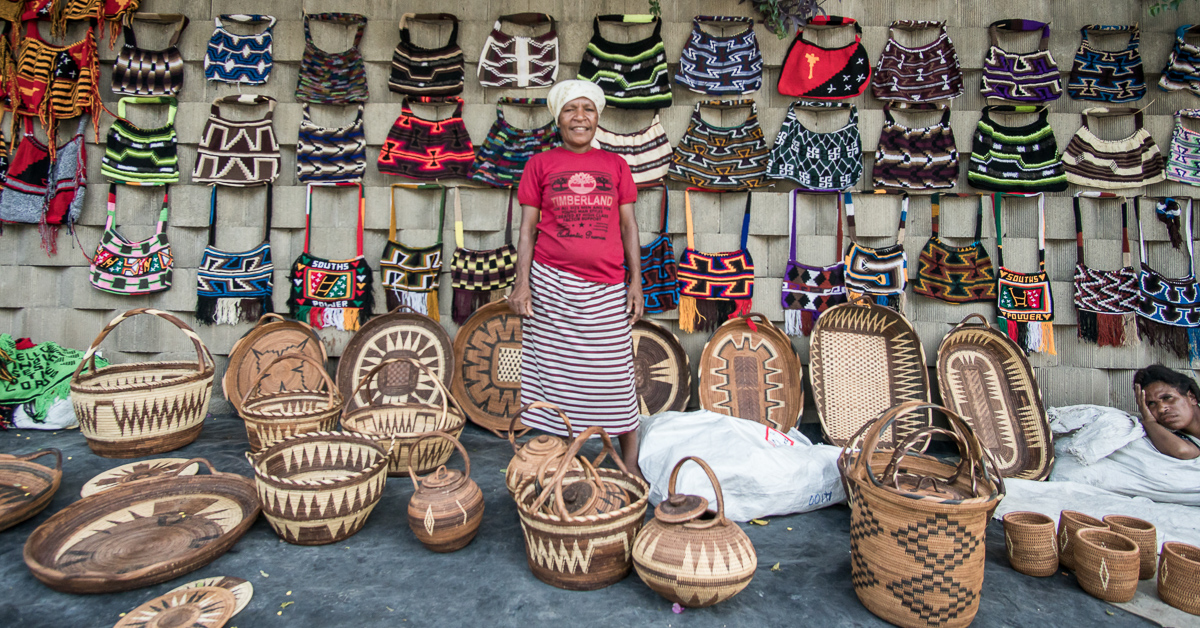 Jessica Cassell writes of her time in PNG and the opportunity she saw to add value for local women by evolving the bilum bags into jewellery.

(A message to the reader from Jessica Cassell in Tok Pidgin.)

(A message to the reader from Jessica Cassell in English.)

(A message to the reader from Maureen in Tok Pidgin.)

My first introduction to Papua New Guinea was through reading excerpts of Malinowski’s The Argonauts of the Western Pacific at University. Since then, the country held mythical and revered status in my imagination. As fate would have it, six years after graduating with a degree in Social Anthropology from London School of Economics, I found myself headed for Madang, on the North coast of Papua New Guinea to take up a volunteer role through the British NGO Voluntary Service Overseas (VSO). I was going to be working for Tokaut AIDs, a theatre for awareness project aiming to raise awareness about HIV in rural communities.

In preparation for this placement, I learnt that the largest of the Pacific Islands, Papua New Guinea, was the most geographically and culturally diverse country in the world, with over 800 distinct tribal language groups and the most extensive and exquisite array of flora and fauna anyone could dream of. Species of animals were still being discovered here due to the impenetrability of much of the landscape. But the thing that has always captured my imagination the most were the arts and crafts and specifically the bilum.

In the national language, Tok Pisin, a mother’s womb is called bilum bilong baby translating to “bag of the baby”

A bilum is a Papua New Guinean (PNG) iconic string bag holding deep cultural and emotional significance. Women hand weave bilums, a skill passed down through generations of female kinship. Traditionally made only from natural fibres, bilums lie at the very foundation of society. In the national language, Tok Pisin, a mother’s womb is called bilum bilong baby translating to “bag of the baby” and bilums are used to carry babies, carry firewood and food and adorn bodies at times of ceremony and celebration.

Arriving into any town in PNG one is immediately struck by a kaleidoscope of colourful bilum bags hanging along fences for sale, or being carried by men and women alike slung from a shoulder, neck or head. 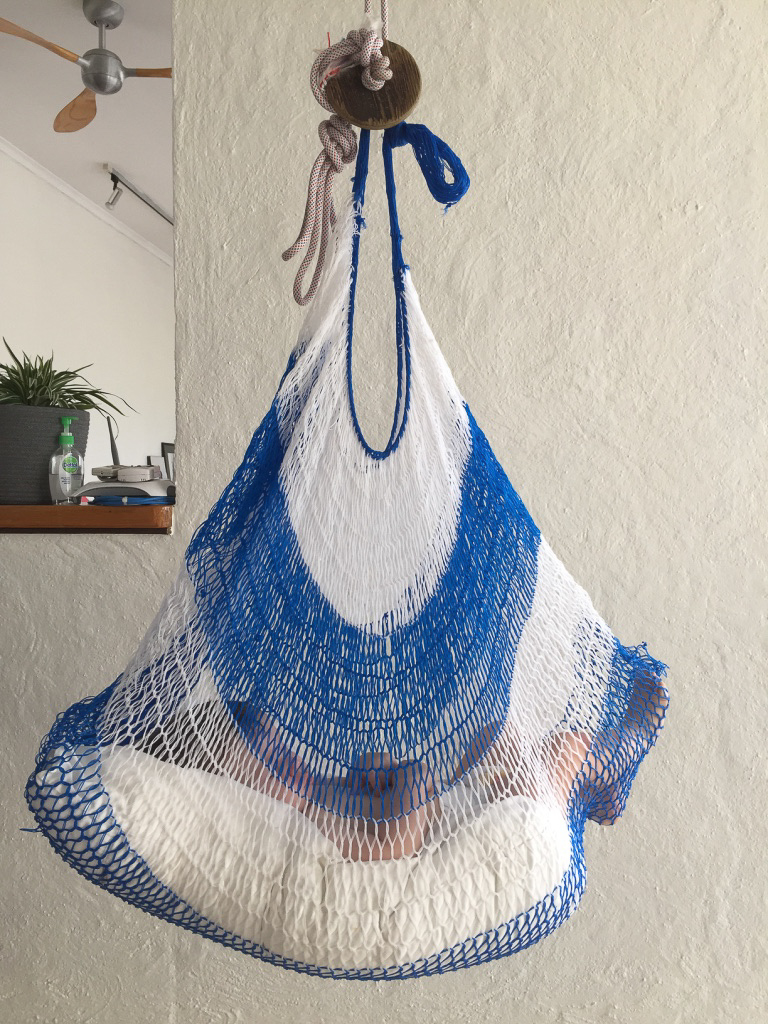 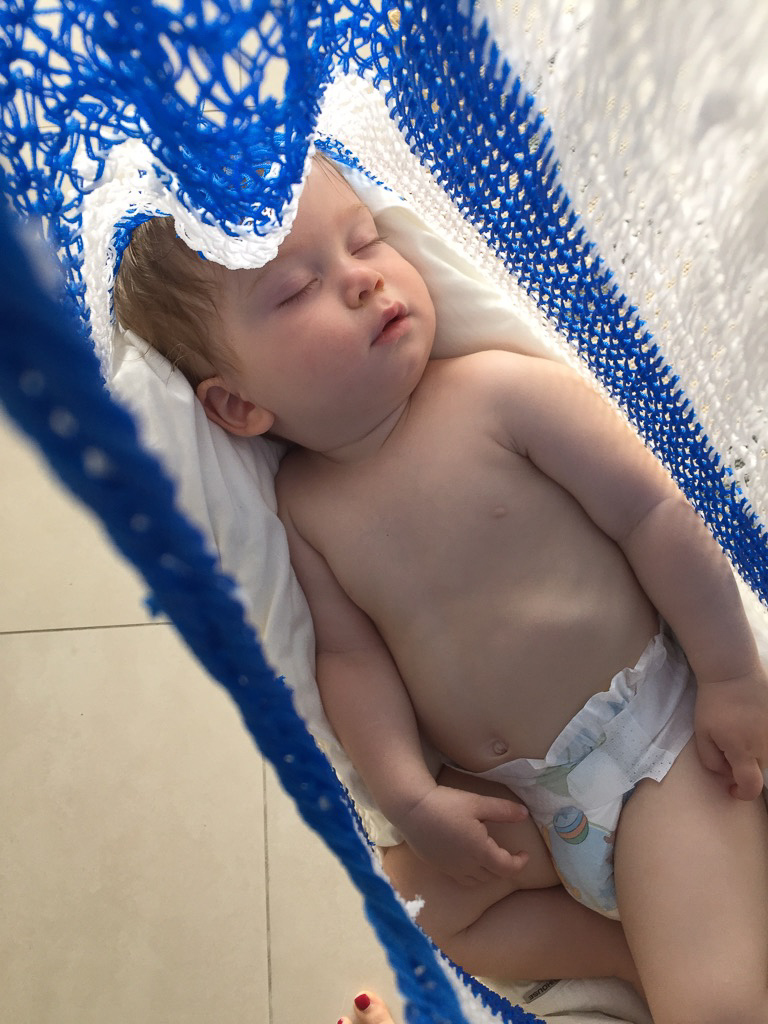 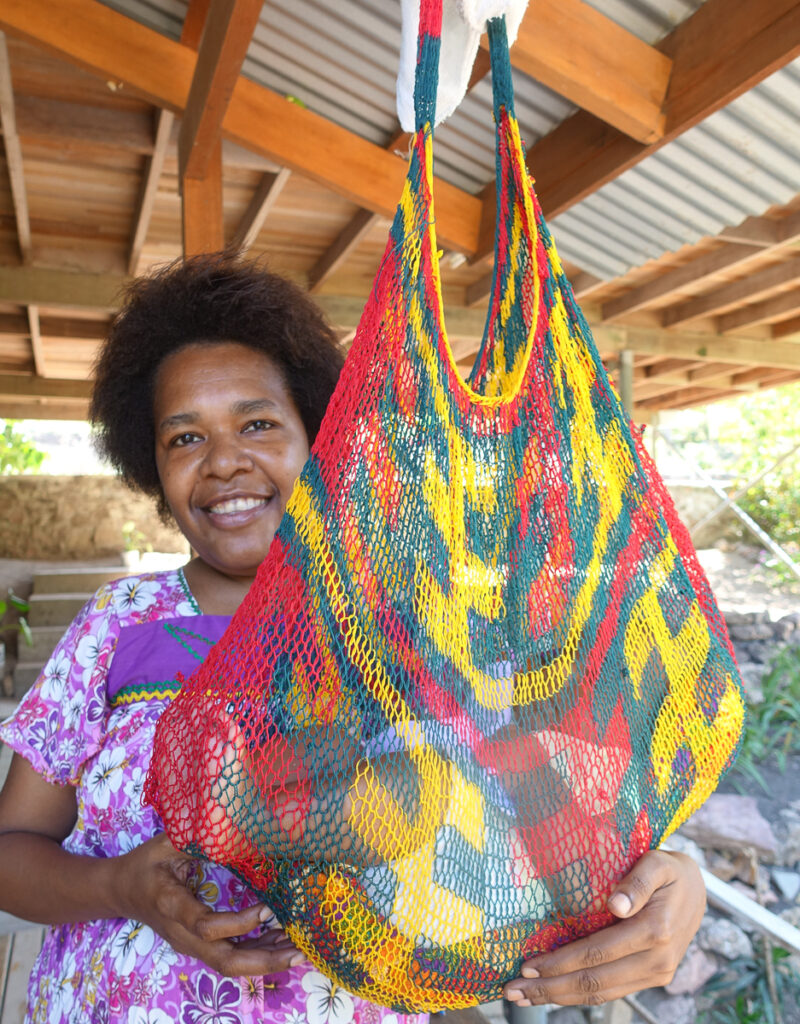 Seven years after I arrived in PNG and was heart-warmed by the sight of babies sleeping in bilums, I was still there and my own babies arrived and slept in a blue and white striped bilum hung from a beam in our house overlooking Hanuabada village in Port Moresby.

PNG’s rural population is still around 80%, yet there is still an increasing transition from village subsistence to urbanisation and a cash economy. As well as bilums still being made for cultural and functional purposes, bilums are also now produced for commercial sale.

Where city settlements spring up, diverse tribal groups merge and the strong traditional customs that unite society can start to weaken. In these settings, women are often vulnerable and can be exposed to domestic violence, creating a cycle of poverty. Many women try to support themselves with their traditional skills such as weaving bilums and bilas (adornment/jewellery), but market access is limited to local sales, making it hard to earn enough to survive. 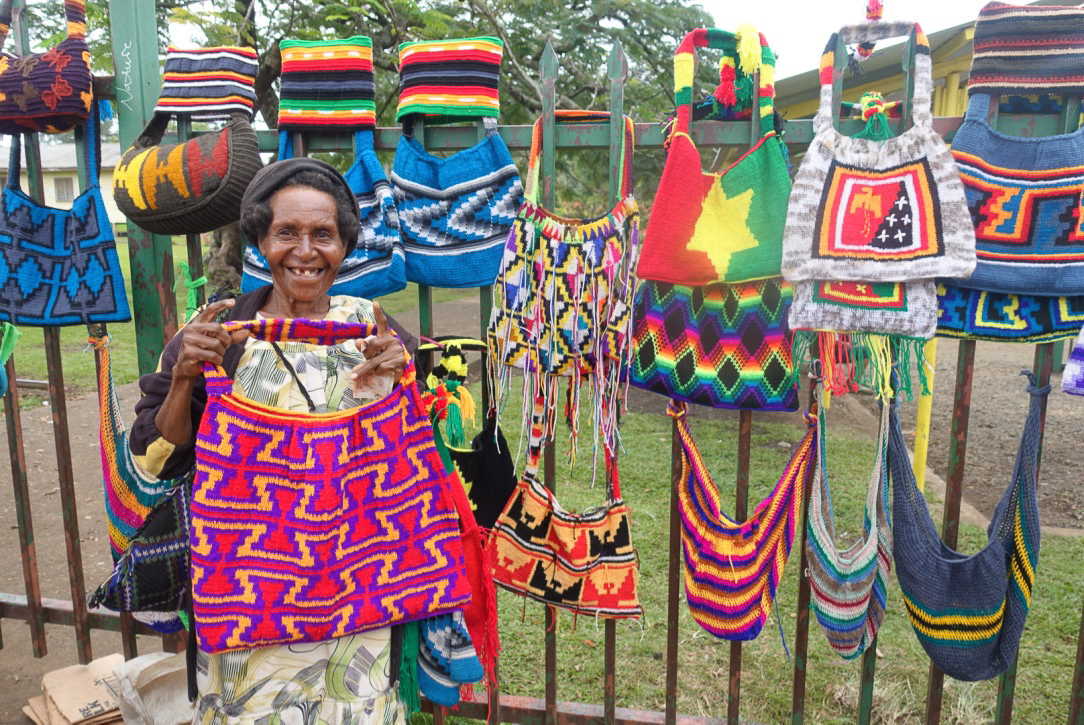 By this point, I had met plenty of women who made and sold bilums and I knew what a struggle they found it to make ends meet. It was very much a hand to mouth existence.

Coming from overseas I had seen the economic opportunities and demand for both unique traditional crafts and contemporary designed crafts. There seemed to be huge potential for economic empowerment by connecting PNG artisanal producers with international demand that was yet to be explored.

In 2013 I started Bilum & Bilas as an online bilum store focussed on opening up international markets to generate better income for bilum weavers and artisans.

Over time, I discovered that better market access also meant consistent quality control and creating competitive designs and I started to explore this with artisans. In the beginning, communication was challenging and it became obvious the only way to work was through close collaboration, side by side with weavers. As weavers lived a hand to mouth existence, they could not afford the time to sit and develop samples and engage in exploration in the hope that it may mean more orders and better sales in the future. They needed immediate income to support their families.

I knew then that a need existed for the women to receive pay in exchange for their time exploring and collaborating on designs and the idea of an employment model was born.

The intricate craftsmanship, traditional process and labour that goes into creating a bilum is what makes them unique, but also means they can’t be produced at a scale where artisans can be employed to make them. The cost to produce them in this way would not be viable. 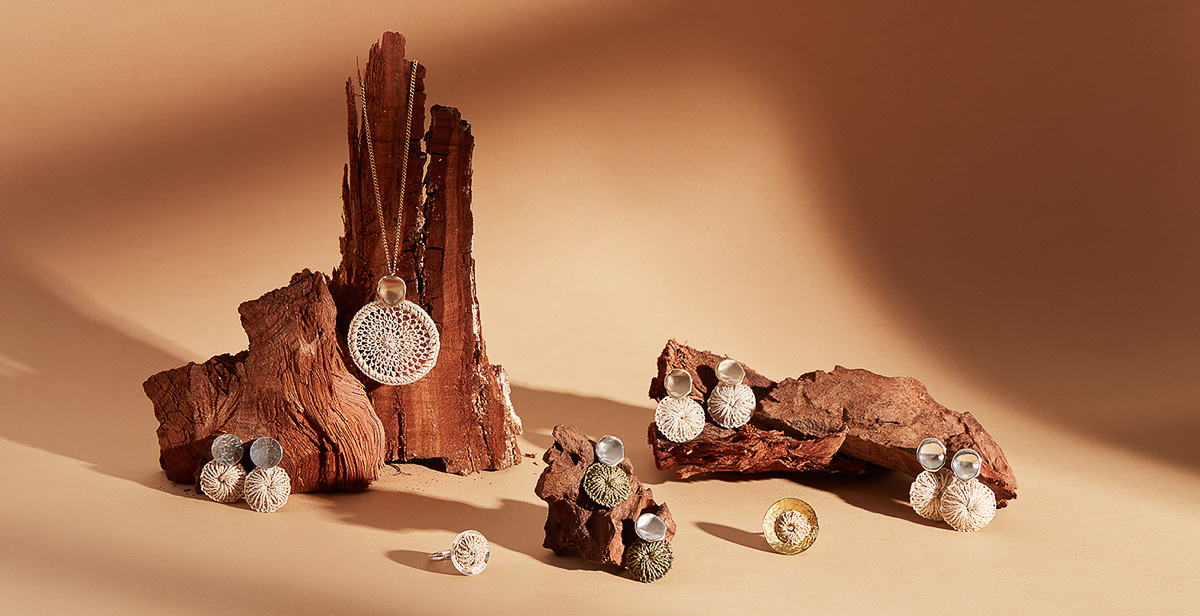 Bilum & Bilas’ contemporary jewellery range was developed as a solution to this issue. The range is inspired by the beauty and essence of the bilum, and retains the traditional weaving techniques and natural fibres, yet in micro form. Creating intricate representations of bilum streamlines the making process, enabling us to optimise production and create stable jobs for Papua New Guinean women with these unique skills.

Bilum & Bilas now has a studio space in Port Moresby where four full-time weavers come to work daily and benefit from an income guarantee, and a safe and secure work environment. Through equitable collaborations, they receive training in fashion trends and international quality standards, enabling them to produce more competitive designs, supporting sustainable business. 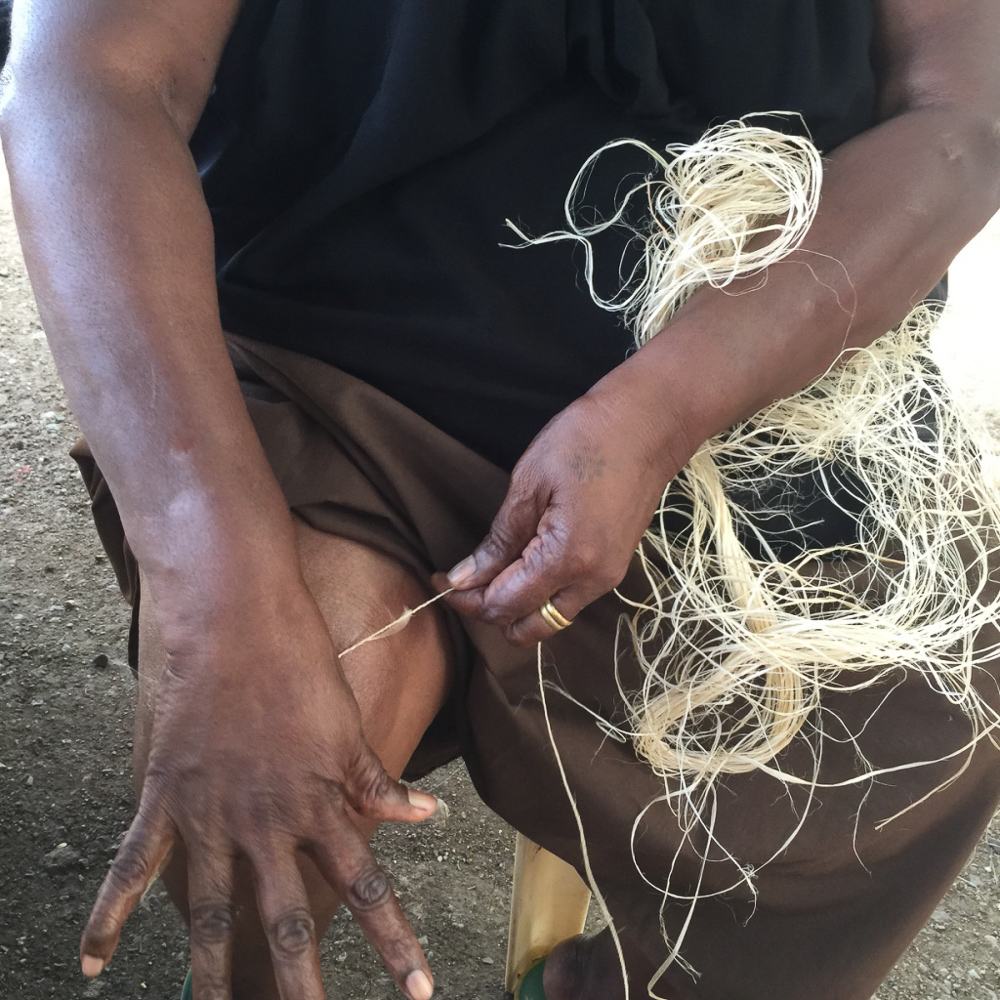 Traditionally bilums are made from local plants which are harvested, cleaned, stripped and laid in the sun to dry. Through a process called tanin rop (turning rope), women then twist the residual fibres together by rhythmically rolling the strands together along their thighs to form a string called bus rop (bush rope).

The bush rope is then handwoven into bilums using a technique called “looping”, creating a pattern similar to a figure eight. PNG’s cultural diversity is reflected in the multitude of colours, patterns, shapes and styles used in bilums. Each bilum is completely unique and is an art form used to differentiate and express oneself. 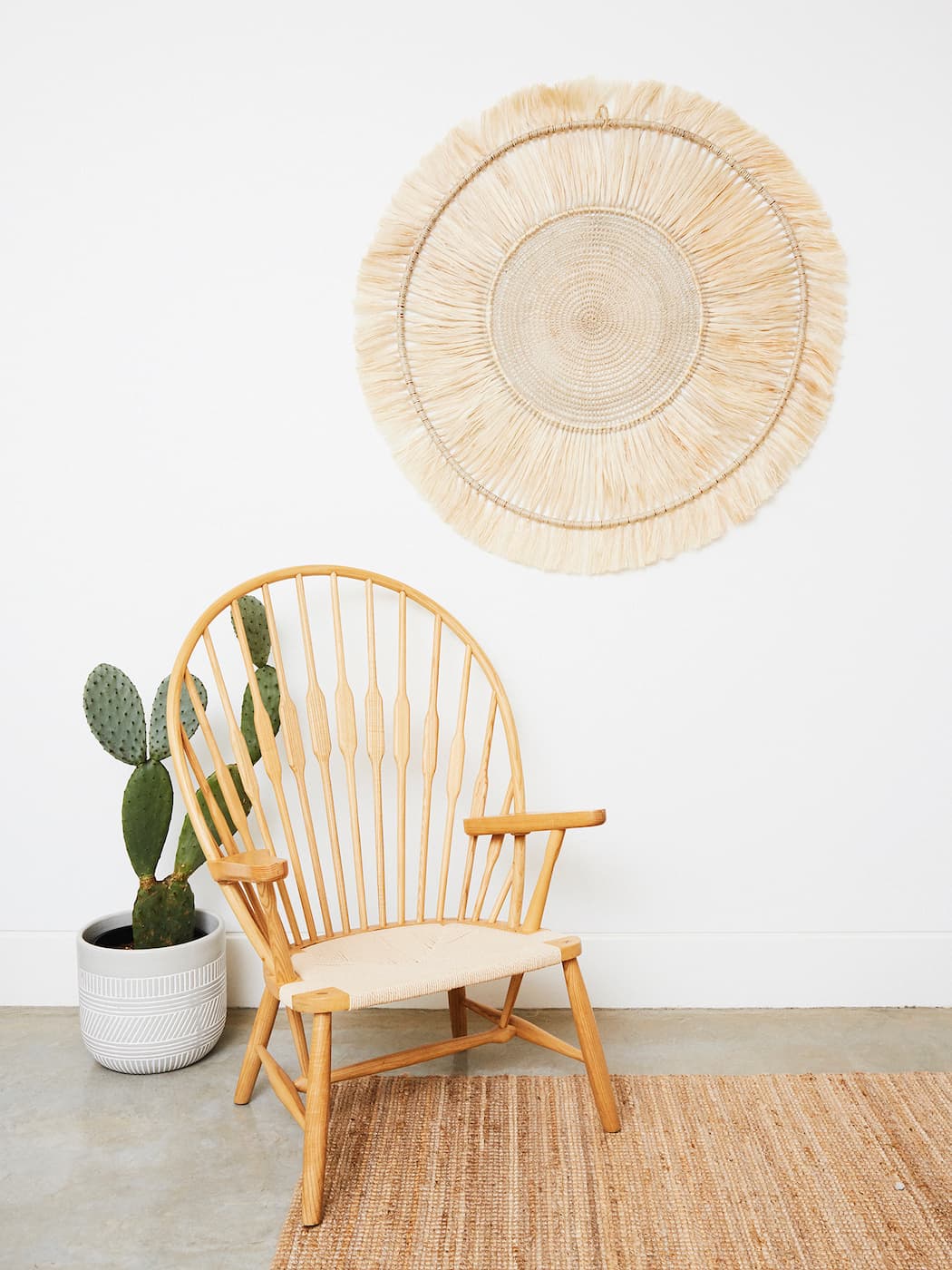 All our pieces use these ancient processes and techniques. We use two heritage fibres in our range, the rappa plant, similar to sisal and mungus tree bark, both grow wild and in abundance in Central Province where we are based. We work with local communities that harvest and process these plants to produce the fibre used in our designs. The income generated from our fibre requirements has been an additional benefit of Bilum & Bilas and we now support more people through our demand for raw material production. 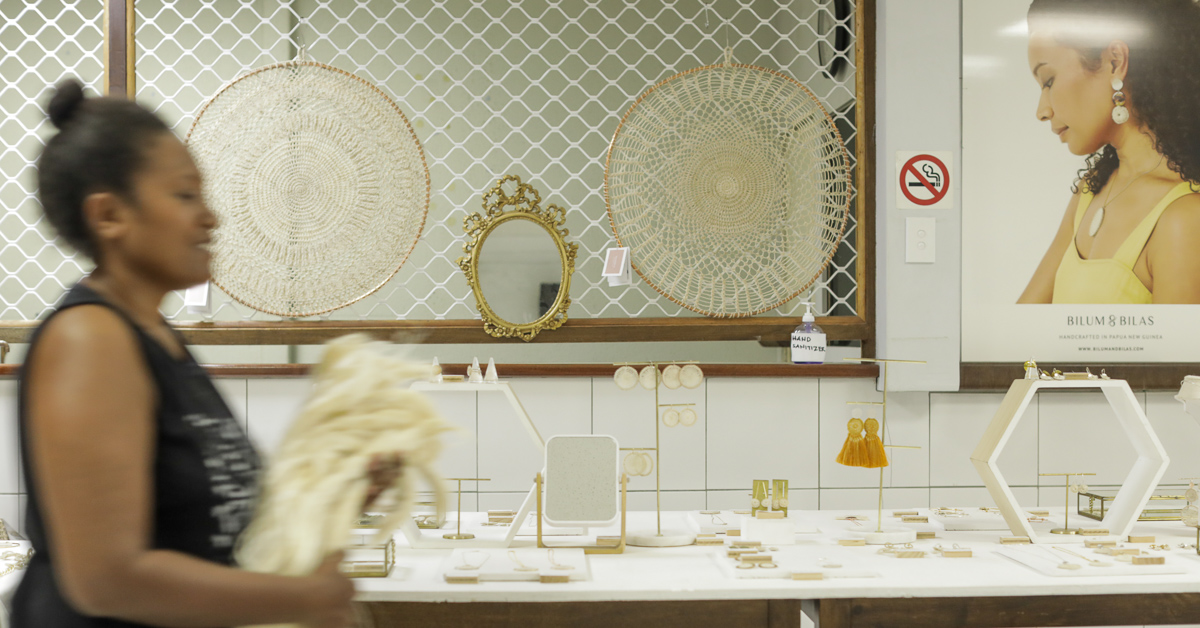 Our design process both considers current fashion tastes and also how traditional fibres and weaving techniques can be honoured whilst reflecting these aesthetics. Final designs see bilum string woven into unique components, before being combined with metals to create the final pieces.

In 2018 Toru Toxcy Taisu joined our small team with over 40 years of experience as a jeweller. He brings incredible craftsmanship and expertise to our range and has expanded our creative horizons. Whatever we can imagine, Toru can bring to life with his abilities.

We have also grown our range to include fibre artworks which are large feature pieces of woven materials for a wall display that showcase weaving skills and traditionally produced fibres in interesting forms. Bilums are works of art and our wall hangings take this interpretation and push it to its final conclusion: artworks for the home. 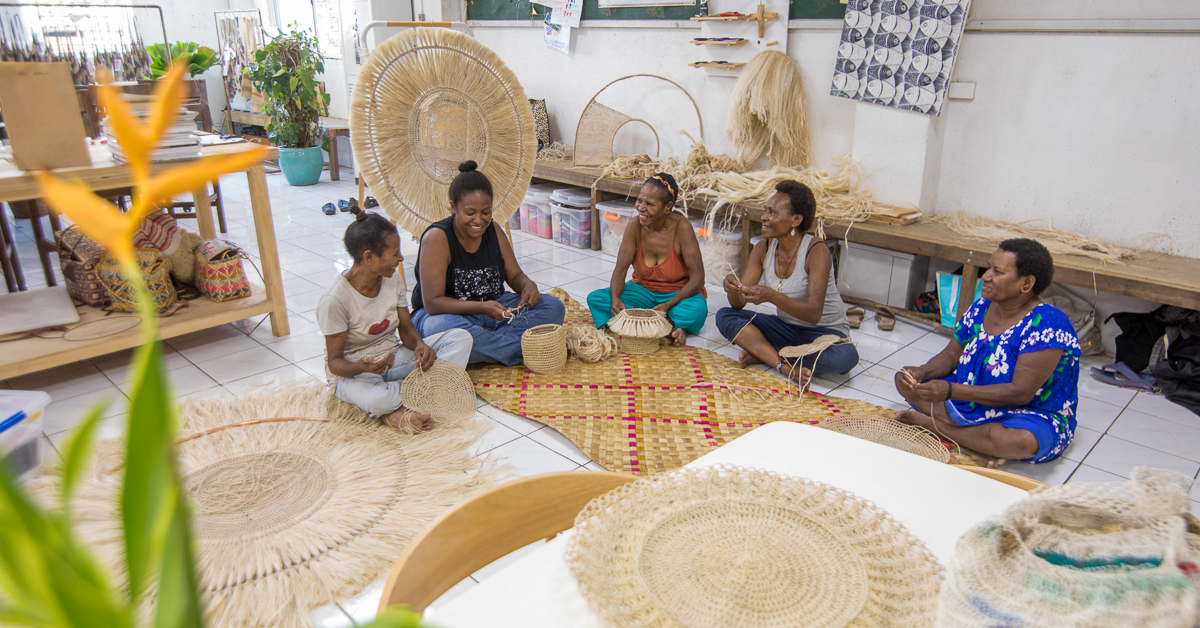 Selina Navi is one of Bilum & Bilas’ head weavers. Prior to joining Bilum & Bilas her circumstances are reflective of many PNG weavers. Sometimes she had money from market sales and other times she did not. She moved through a cycle of borrowing and repaying debt depending on her irregular market sales. She does not have savings or NasFund (PNG’s superannuation system) and exists hand to mouth, in an informal often dangerous economy.

“I’m very happy working with Bilum & Bilas, as I receive a guaranteed income and I don’t have to rely on market sales. The products we are making now is something new, so I hope that more people will buy these styles and I’ll be able to continue getting work. We now have more secure working environment and benefits.”

Whilst our enterprise is still small with a relatively niche market, it has made a big impact on the lives of the artisans that work with us. We’ve been part of demonstrating the potential for traditional crafts in Papua New Guinea. Through new communication technologies and innovation, many more PNG artisans are now able to capitalise from a growing demand for unique products and homewares, harnessing economic opportunities which benefit makers and owners of the traditional knowledge.

Bilum & Bilas are offering Garland readers an exclusive 10% discount for online orders until the end of 2021. Please use code GARLAND10 at checkout via www.bilumandbilas.com 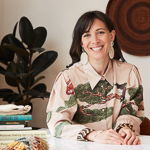 Jessica Cassell is currently in Sydney, but lived in Port Moresby from 2008 to 2020. She holds an MSc in Social Anthropology from the London School of Economics and worked in communications in fashion, TV and NGOs before founding Bilum & Bilas in 2013. Jessica still works full time with Bilum & Bilas supporting the team remotely through designing and marketing the brand internationally. Visit www.bilumandbilas.com and follow @bilumandbilas.

Let's go back to the campfire: The lesson of mingei
Alchemy in Japanese traditional craft: Forging and polishing the spiritual world
An invitation to look but not touch: The Rigg Design Prize 2015
Ivana Taylor ✿ Wrapped with care
Inner Traces: A dance of three rings
Where the weaver left off
Cupinzeiros: Back in touch with childhood
Nalda Searles ✿ Re-gifted in red