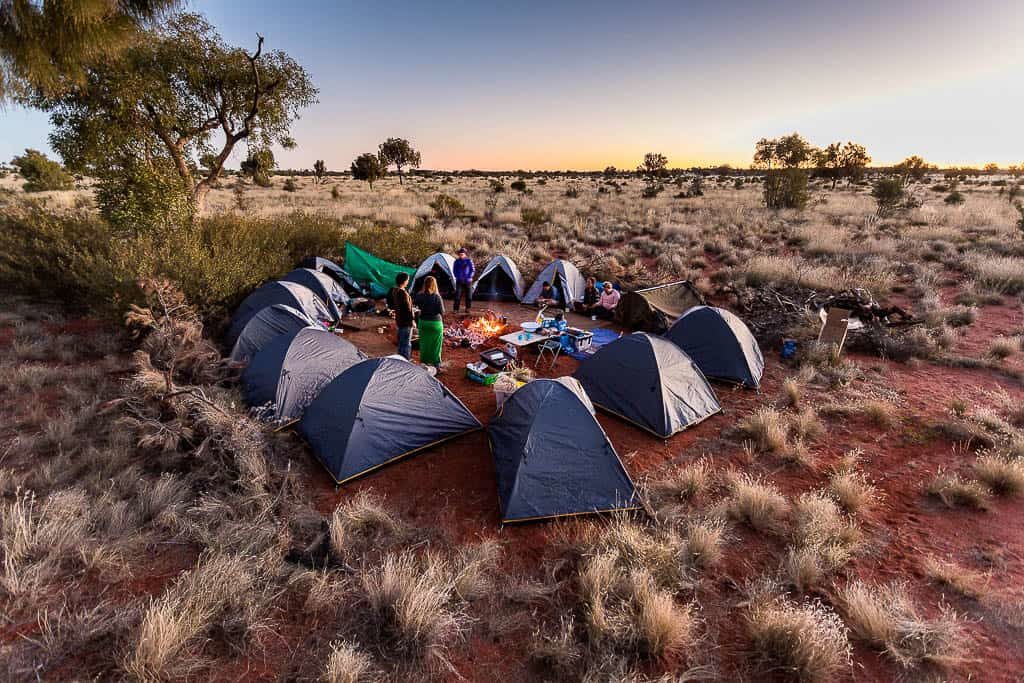 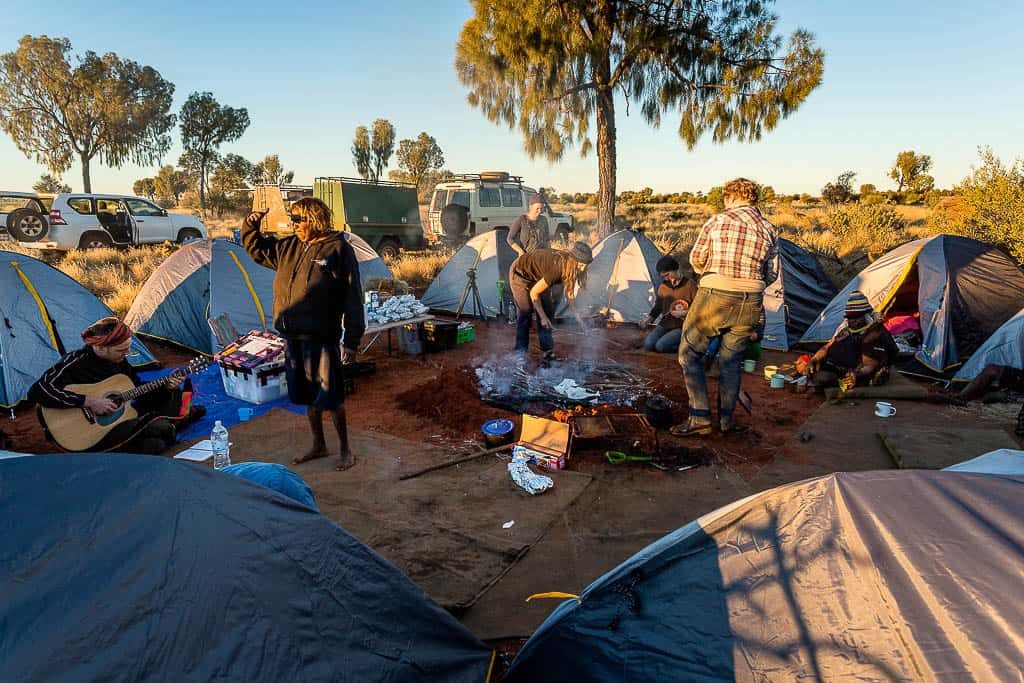 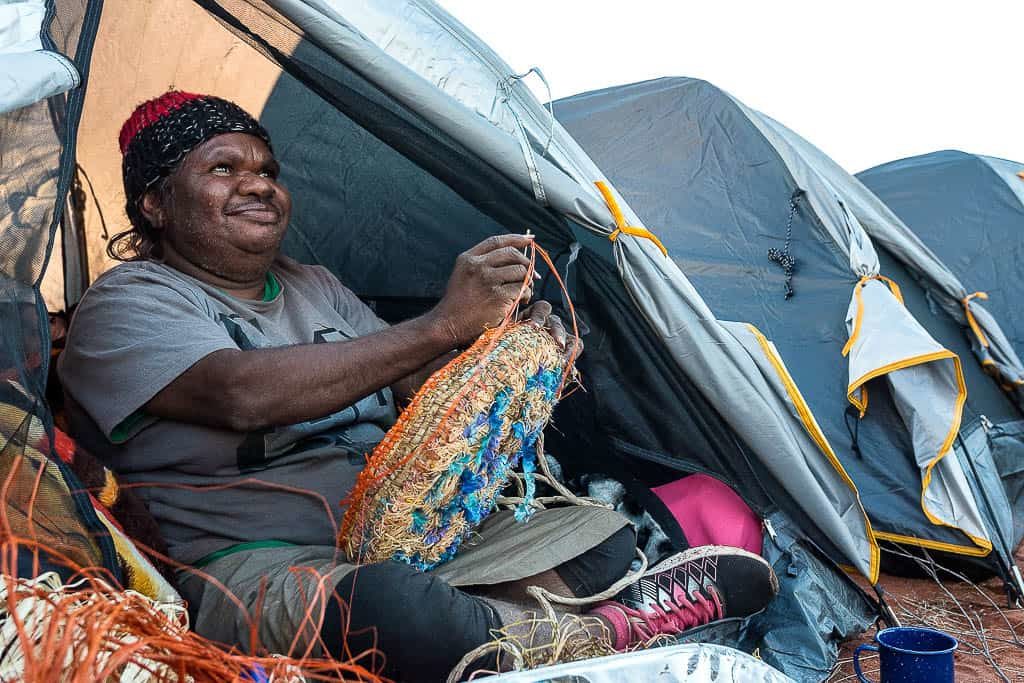 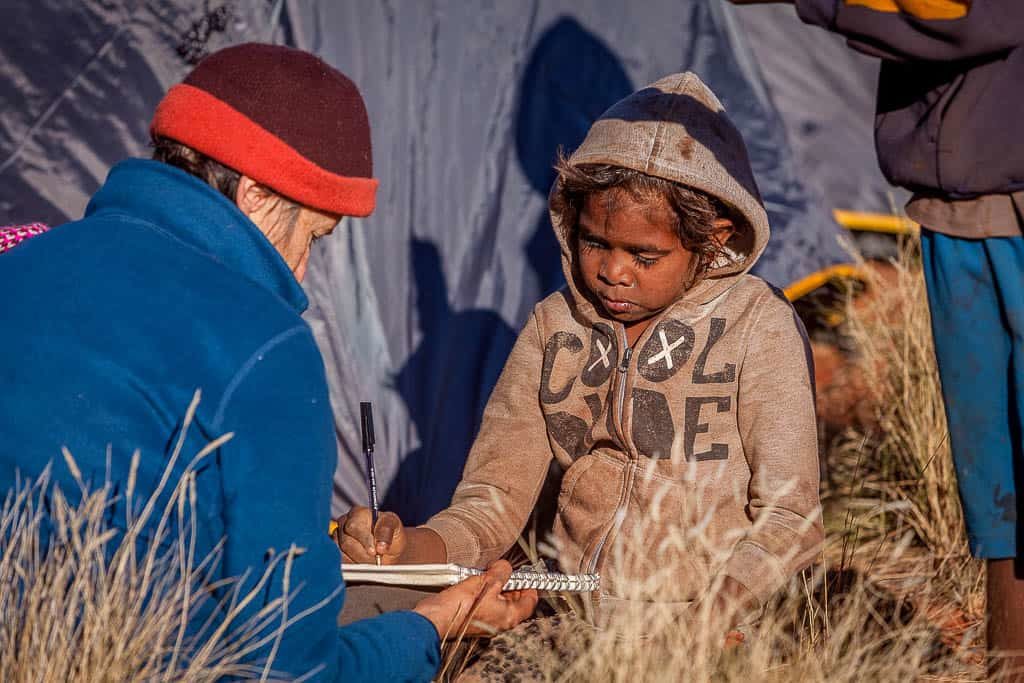 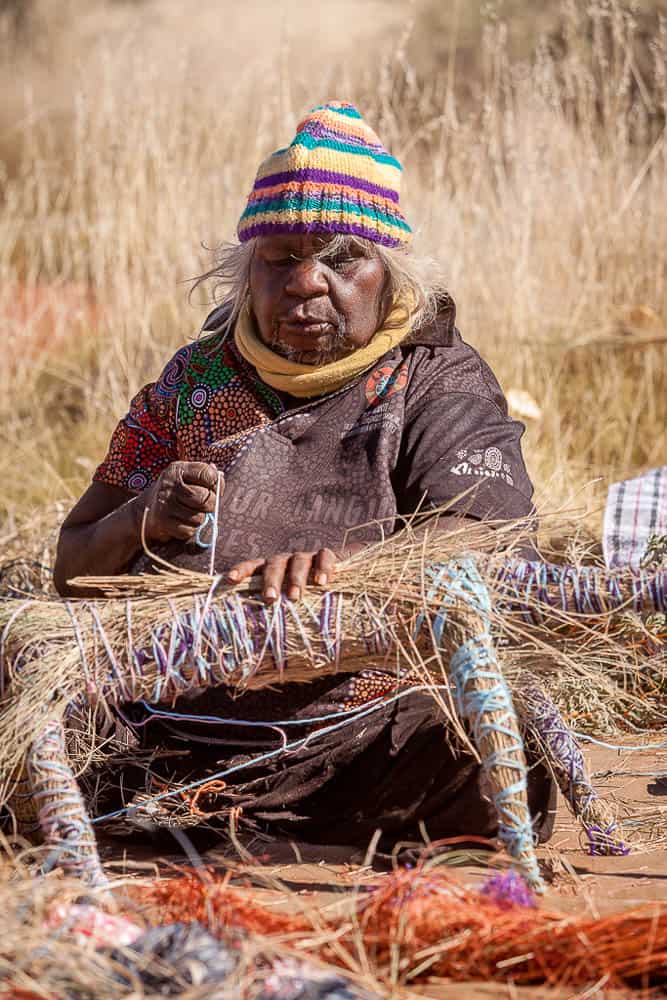 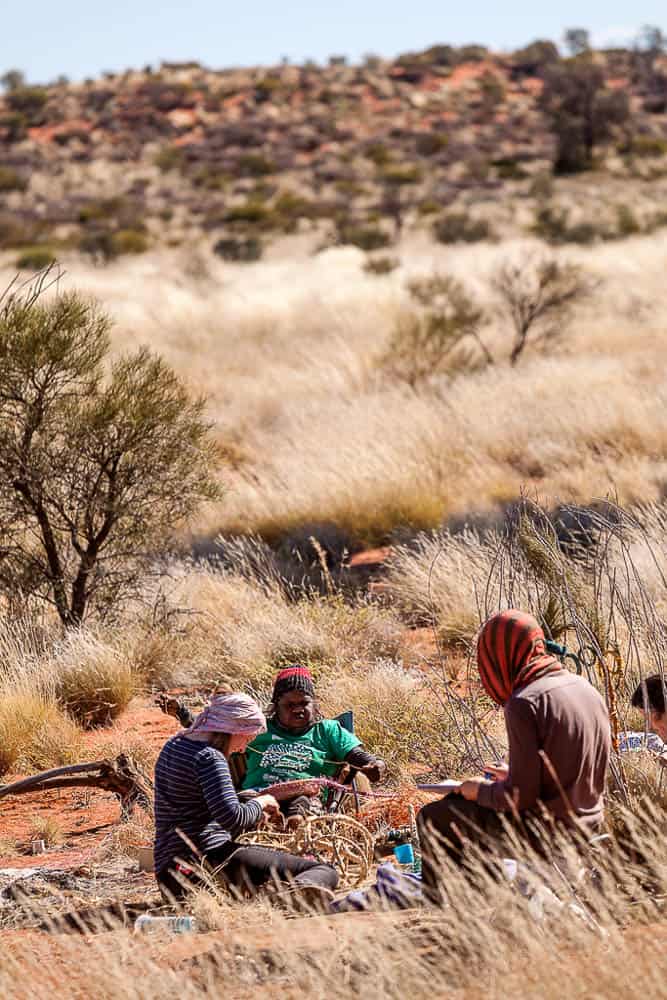 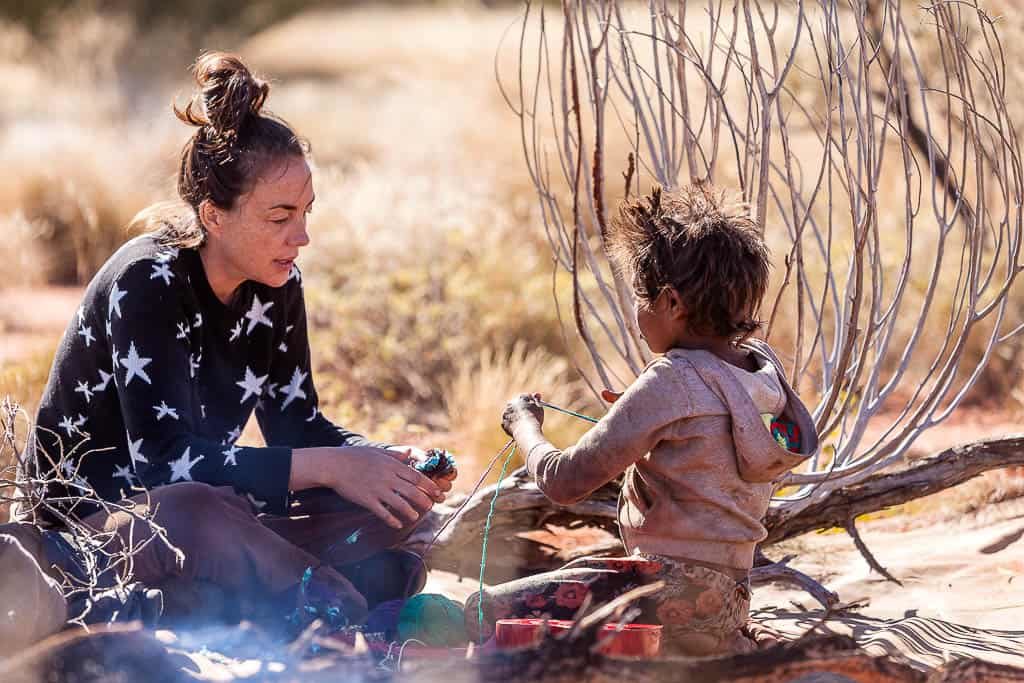 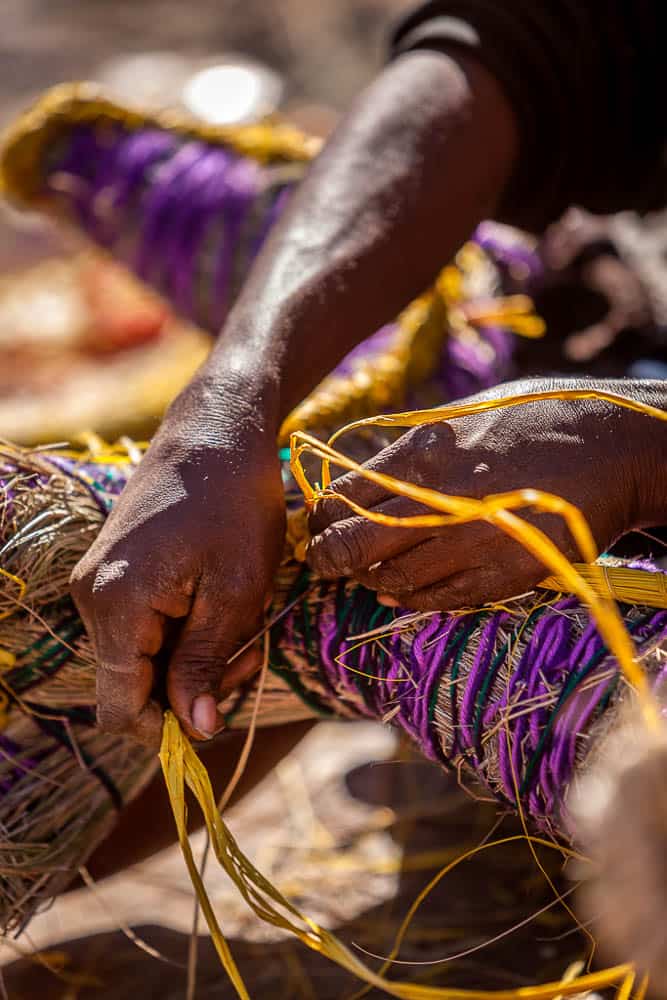 Since 1995, Tjanpi Desert Weavers (Tjanpi) has represented a powerful cultural force in remote central Australia. Tjanpi is an enterprise of the Ngaanyatjarra, Pitjantjatjara, Yankunytjatjara (NPY) Women’s Council, whose reach extends across the country’s vast tristate border region. From humble, experimental beginnings exploring weaving as a potential new income source in an Aboriginal art scene largely dominated by male painters, in just two decades the organisation has established itself as fundamental to Central and Western Desert culture. Through my curatorial role at Western Australian arts organisation FORM I have been privileged to work with Tjanpi on numerous projects since 2002, and witnessed firsthand its remarkable malleability in adapting and expanding to encompass diverse contexts and outcomes.

Tjanpi originated in response to the expressed need from NPY members for more sustainable, culturally-appropriate employment opportunities. NPY’s Thisbe Purich decided to trial the introduction of weaving skills to women in Papulankutja (Blackstone, Western Australia) in 1995, making use of tjanpi, local grass, as a base for woven basketry. Running workshops over an afternoon, Purich initially assumed the experiment had failed when the women instead chose to create manguri hair rings, a traditional accessory made from tjanpi, used for carrying objects on the head. It was only a few days later that the first baskets appeared, growing organically from bases formed from these traditional bound circular forms; from the outset the medium represented a hybrid of traditional and introduced technique, in perfect synergy with remote community life.

From these tentative beginnings, the Tjanpi movement grew and spread with extraordinary vigour, Purich noting that she “tried to teach the women but they were making [baskets] at home quicker than [I] was able to help”. Though other non-Indigenous artists were invited to share further skills, the primary driving force was always the NPY women themselves, exchanging techniques and innovating as they travelled between communities for Culture, Law, funerals, and social and sporting events. The initial baskets quickly went on to inspire small woven sculptural forms, which soon expanded into large-scale installations. A growing tradition of guest artists’ camps in remote bush locations has resulted in numerous major commissions and collaborative projects over recent years, with outcomes shown at major Australian institutions, in national touring shows, and as part of Fiona Hall’s Wrong Way Time at the 56th Venice Biennale.

Tjanpi’s latest evolution is into the realm of performing arts, via a collaboration instigated by FORM in 2016. FORM’s curatorial team first noted affinities between Tjanpi’s aesthetic and that of highly innovative Melbourne children’s theatre company, Polyglot Theatre in 2016, while investigating the development of new programming aimed at young people. Though working in very different disciplines, both Tjanpi and Polyglot are internationally renowned for their highly-engaging use of simple materials and easily-taught hand making to create aesthetically sophisticated, and often collaborative outcomes. With this in mind, we approached both organisations with the idea of developing a work for children. We were delighted to discover that serendipitously, Tjanpi had recently been toying with the idea of collaborating with a performing arts company, while Polyglot had for some time been keen to explore a cross-cultural exchange with Aboriginal artists. None of the respective partners really knew what to expect, or what work such a collaboration may result in, but everyone was keen to explore the concept and see what may or may not eventuate.

During early discussions it was determined that the project’s development phase was to be structured around three workshops in each of the partnering organisation’s headquarters, allowing for the work to be informed by input from children from eastern, western, and central Australia. For Tjanpi Manager, Michelle Young, the inclusion of artists from the remote Western Australian community of Warakurna was an obvious choice for the collaboration, the community having emerged as a leading innovator in both painting and weaving in recent years.

The first workshop took place at Polyglot’s offices in Melbourne, in the unseasonably chilly November of 2016. Myself, two of my colleagues, three Tjanpi staff, a Ngaanyatjarra interpreter, and four very cold Warakurna artists joined Polyglot’s team in South Yarra for a highly experimental fortnight of sharing stories and prototyping concepts. The first “icebreaker” task, initiated by Polyglot’s Artistic Director Sue Giles was a simple group exercise drawing circles (strikingly reminiscent of manguri) in various colours, resulting in a very beautiful collaborative frieze that has continued to resonate throughout the project.

The Melbourne fortnight was invigorating and at times anxiety-provoking, as the various collaborators sought to establish common ground, and the beginnings of an idea. Despite the ambiguity surrounding what we were actually going to do, a rapport quickly formed, along with a shared understanding that the final concept for the work would only be properly resolved on the Tjanpi artists’ own Country. The fortnight finished with the Tjanpi artists leading in the construction of a wiltja, a traditional shade structure, followed by a hugely enjoyable barbeque at Giles’ house where they cooked damper and roo tail for the group.

The next step would be to meet on Ngaanyatjarra land (a trip from which I was regrettably absent, due to a competing residency project). At the core of this development was a bush camp to gather grass, during which the Tjanpi artists shared knowledge of Country, caught and prepared goanna and honey ants, and taught further skills in wiltja building. The wiltja, present at each workshop up to this point, emerged as increasingly central to the project, a literal ‘safe space’ created from collaborative labour.

Warakurna proved an intensely powerful, emotional, and creative experience for all collaborators, as indicated by Giles’ reminiscences upon her return to Melbourne:

Every separate part of the puzzle…clicked beautifully and properly into place once we were in Country. We had been told that this would happen, but none of us understood really what that meant. Intellectually we knew that things would start to make sense, but we were not prepared for the depth of the emotional journey, the journey in understanding, or the power of the relationships ahead of us…in the artists’ own country, on their terms, things did make solid, real, and earthy sense.

Following the Warakurna trip, a final workshop was held at FORM’s project space, The Goods Shed in Perth, allowing for the construction of a third wiltja, and further collaboration with local children, as well as the students from the Ngaanyatjarra School, who were coincidentally on an excursion to Perth at the time. By the end of this development, the project had a clear structure, focused around the creation of an interactive installation, and though the fine details are currently embargoed. The title Manguri Wiltja provides a clue to its content. “What is at the heart of this project is communicating what life is like for children living in remote communities, and sharing that with children who live in cities” notes my colleague, FORM curator Mollie Hewitt, “sharing stories across these vast distances helps to build empathy and understanding from a very young age in a friendly and playful space.”

Such sharing of knowledge has always been fundamental to Tjanpi’s power, not only via the direct teaching of weaving skills, but also through the way the medium serves as a catalyst for broader cultural exchange, between senior community members and children, between Aboriginal artists of different nationalities, and between Aboriginal and non-Indigenous artists. “We liked working with them, that Polyglot and FORM mob, and playing with kids,” noted Tjanpi artist Cynthia Burke of the three Manguri Wiltja workshops, “My favourite part was building those wiltja in Warakurna and teaching them to build with punu (wood) and branches…we want to keep going [on this project]…us minyma [women] want to travel with that wiltja and go to cities and teach kids.” The manguri itself, a tightly-bound circle of grass, is the simplest tjanpi form to create, acting as a gentle introduction to the craft for children and non-Indigenous artists that nonetheless has powerful physical and cultural strength.

Tjanpi was born of cross-cultural exchange of the most simple, but powerful kind: the sharing of skills over conversation and laughter. Manguri formed the core of the first tjanpi baskets, and in combining the traditions of both mangari and wiltja, this project sees Tjanpi’s journey come, literally, full-circle. Outcomes of the project are expected to premiere in late 2018. 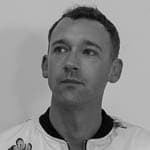 Andrew Nicholls is an Australian/British artist, writer and curator based in Perth who has worked as a curator at FORM since 2002, with occasional sabbaticals to further his own practice. Primarily concerned with site-specific practice, Nicholls’ curatorial work frequently draws inspiration from heritage sites and museum collections, and he has conceived, coordinated, and participated in residencies at numerous iconic heritage locations across Western Australia, China, England, Italy, and the United States, including the Freud Museum London, and the Royal Pavilion, Brighton. Nicholls’ art practice explores how power has been played out through aesthetics historically. He is especially concerned with periods of cultural transition during which Western civilisation’s stoic aspirations were undone by base desires, fears or compulsions.

Kuyu Kuyu: A place for weaving stories and cultural resilience
Purgatory on the Broome Peninsula: the art of Clare Peake
Sustainable housing for artists and creatives: A new cooperative model in Freman...
It begins with a pomegranate: Sirjan kilims by Mahjabin Ilkhanipour
25,000 knots: The hands that make Baba Tree baskets
Baluk Arts: Storied objects tied to Country
Creative currencies in the cupboard: Cecile Williams in Denmark
A silent conversation with Jimmy Poland