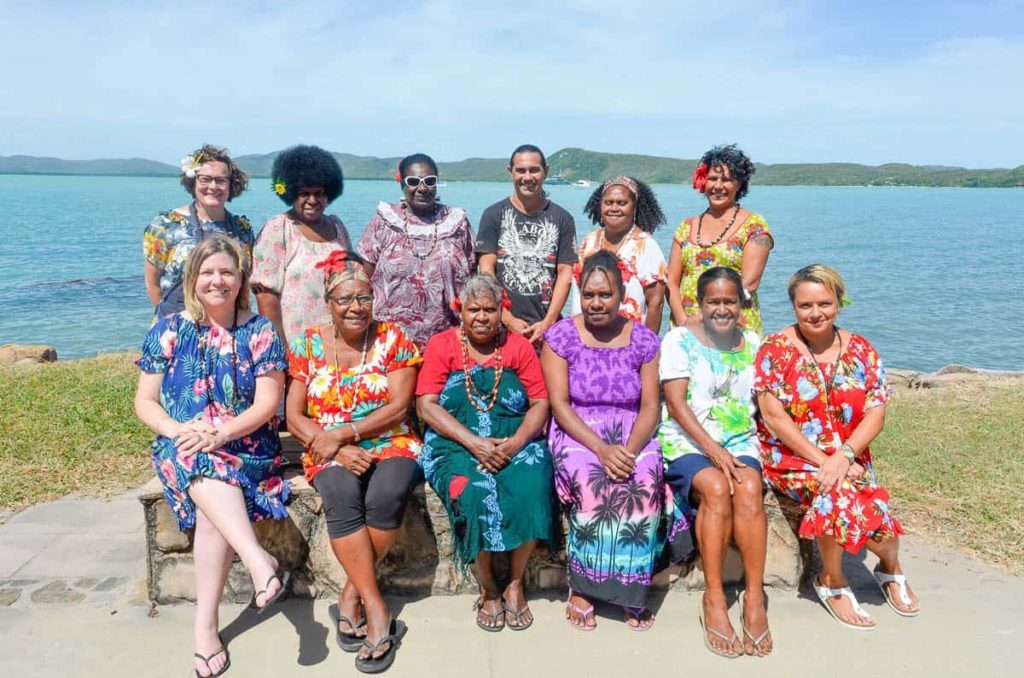 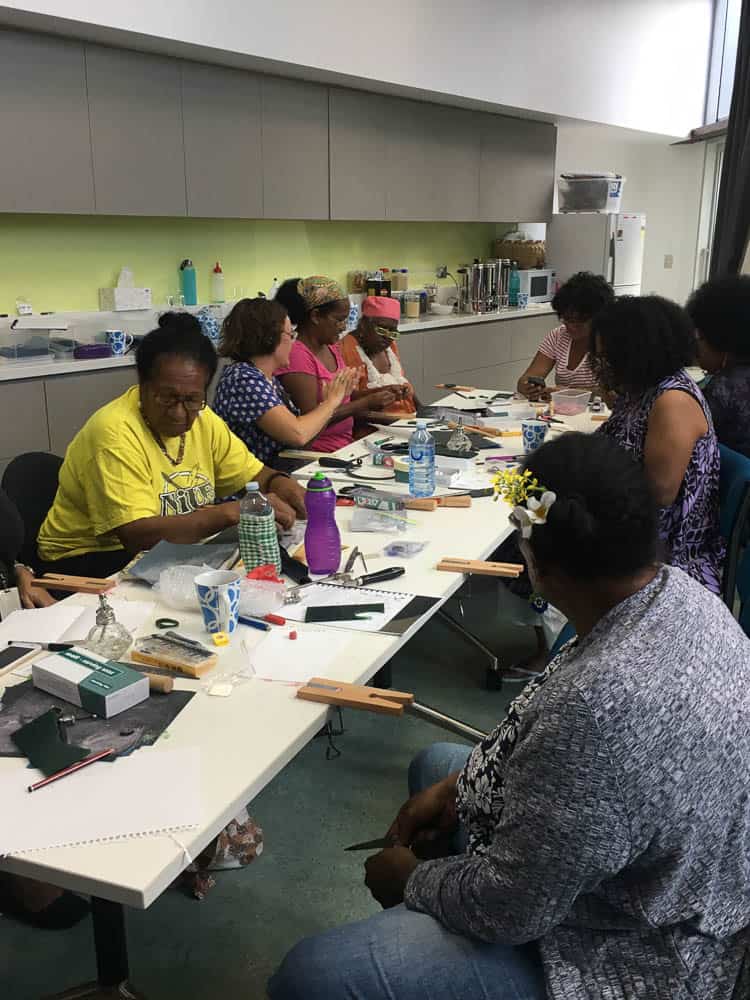 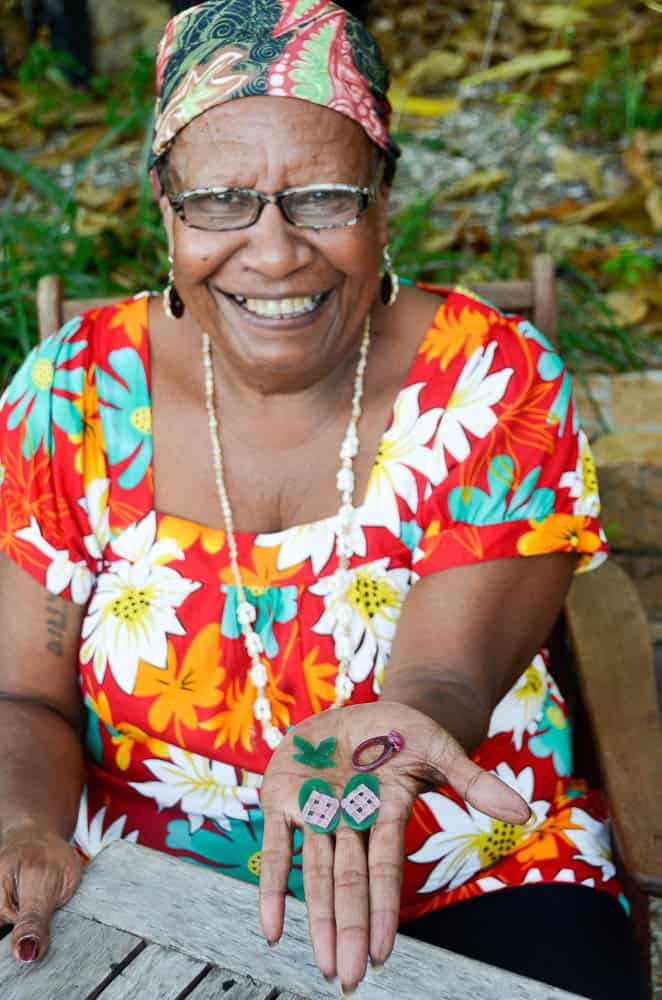 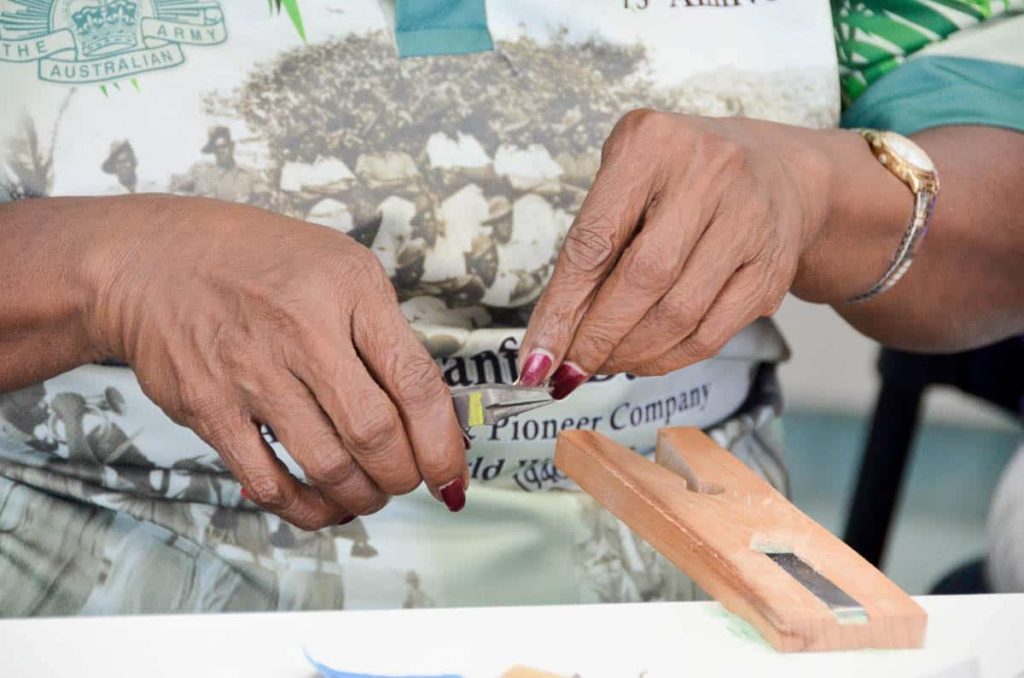 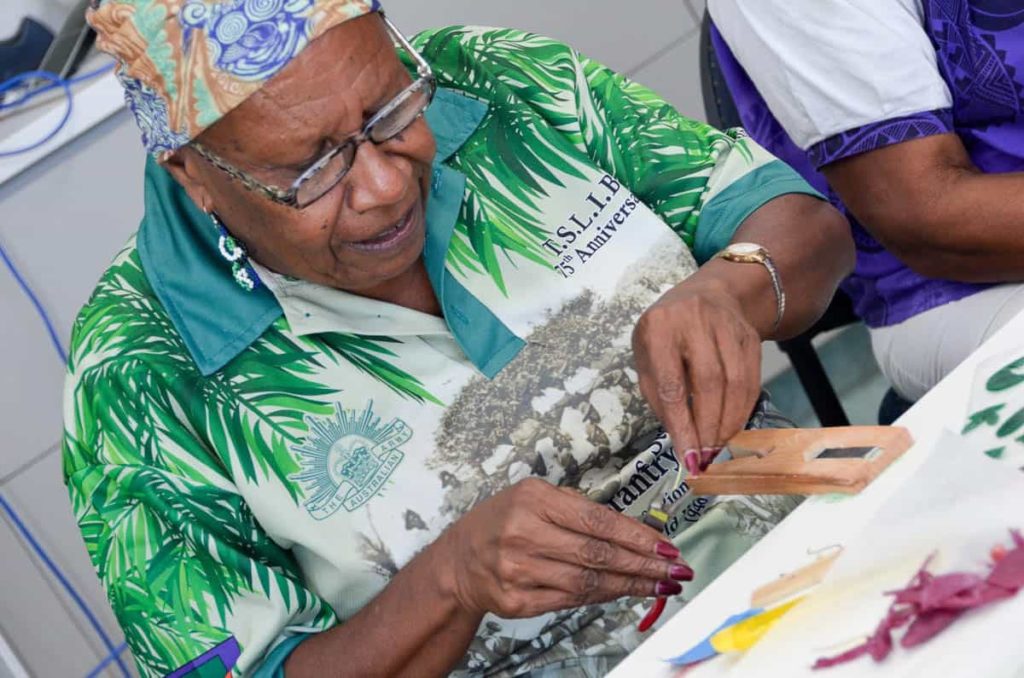 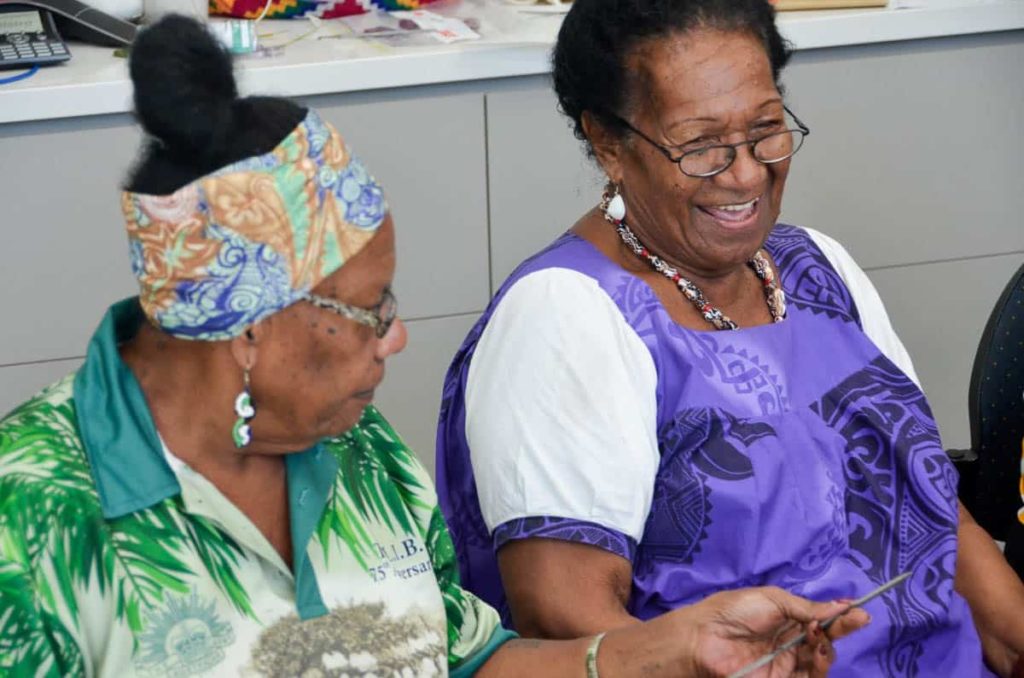 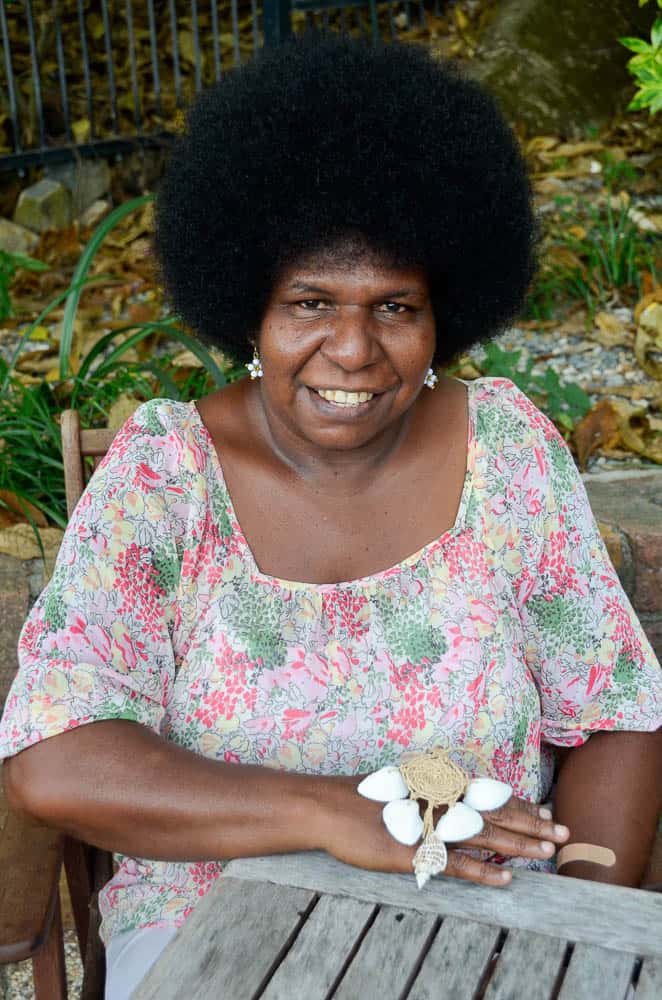 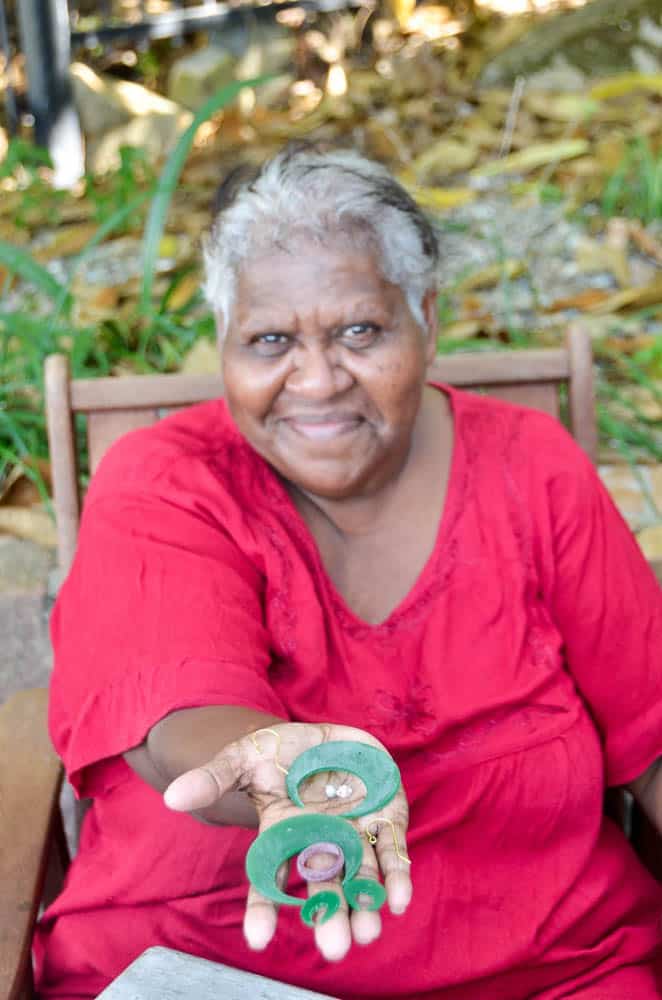 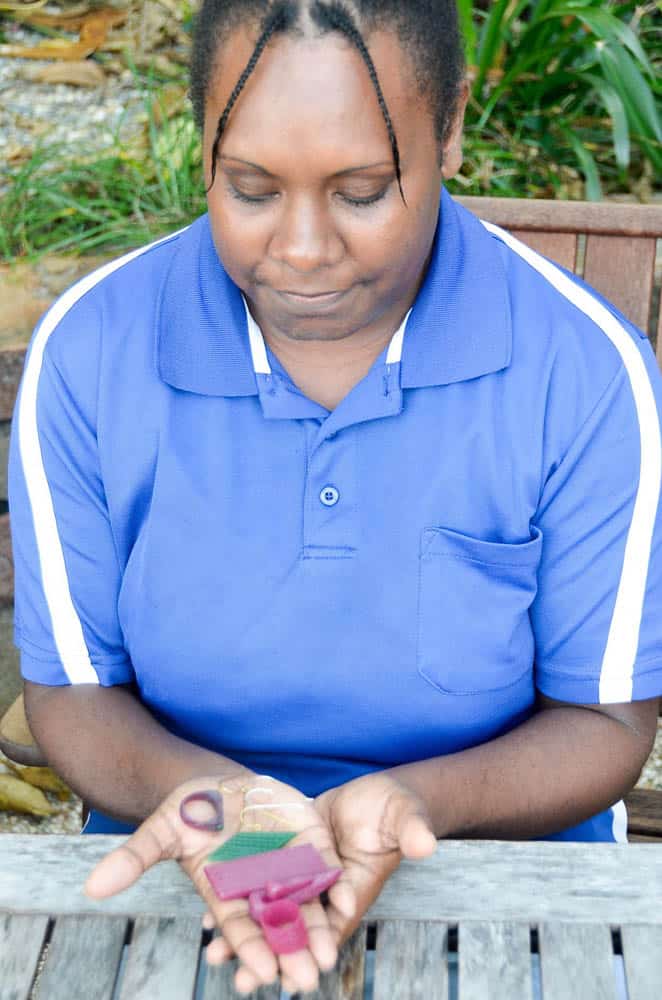 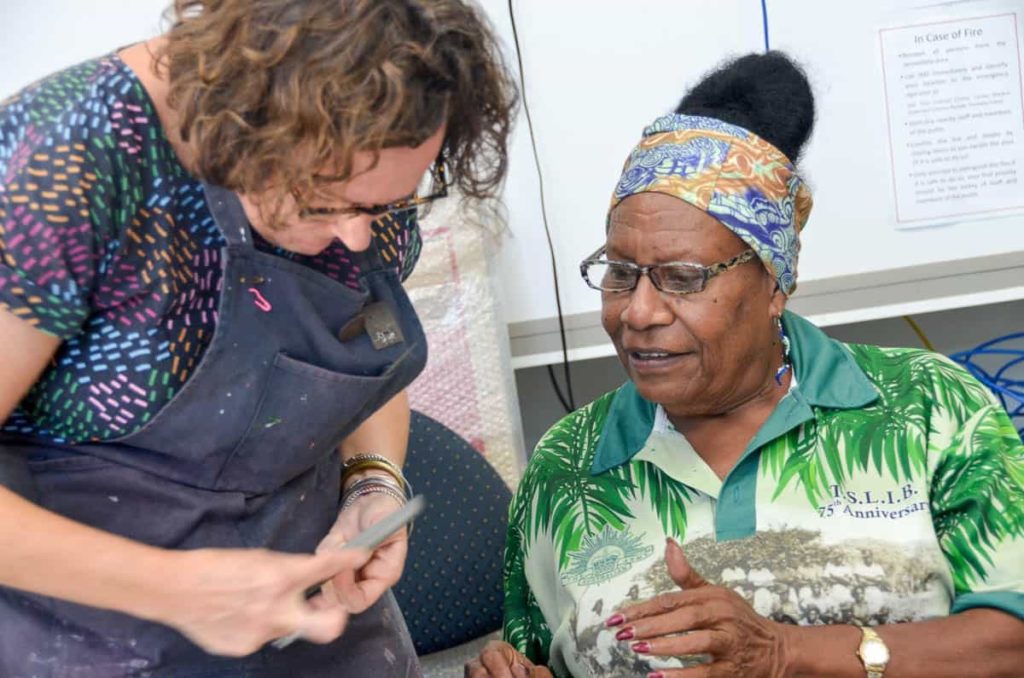 The plane flies over turquoise sea, peppered with dozens of tiny islands, islets and coral reefs that look tempting for a castaway. Volcanic rock and native forests give way to the airport at Horn Island, and everything from the mainland changes.

The airport staff are all Islanders; large friendly men who laugh and joke easily. It is unlike any other airport I’ve ever been: there is no baggage carousel, and handmade local jewellery; traditional pearl shell necklaces and fine beadwork are sold at the airport kiosk. You wait until a baggage cart is driven in front of you, find your bag amongst all the others, then it is put into a van. Your fellow passengers are a mixture of Islanders, who talk and laugh with one another, catch up, and all kinds of others. Government workers, health workers, clergy, FIFOs, even tourists. You board a bus, and the van follows behind with your luggage. Then onto a ferry, with stairs to the lower deck so steep, they are practically a ladder, and an incongruous-looking, comfortable bright red vinyl couch. But beyond: sea a colour you rarely see in reality, only in travel brochures, ads, screensavers. The most beautiful, exotic light blue. And densely forested islands, all around.

The ferry passage from Horn Island to Thursday Island is not long: only 20 minutes or so. This is the Torres Strait Islands, the only part of Australia that shares its border with another country, Papua New Guinea. The traditional owners of Waiben (Thursday Island) identify as Aboriginal, the Kaurageg. Waiben is the administrative centre for the Torres Strait Islands, and the base for many government departments, including the large Torres Strait Regional Authority (TSRA), which was established in order for Islanders to have greater control over their islands.

The region has a unique cultural heritage, with the first inhabitants believed to have migrated from the Indonesian archipelago 70,000 years ago at a time when New Guinea was still attached to the Australian continent. Today it is a unique blend of Torres Strait Islander, Aboriginal, Papua New Guinean, Chinese, Malay, Japanese, Pacific Islander, European and other nationalities. This ethnic mix was largely due to the extensive pearling industry which began in the 1860s and continued until World War II. The jewellery tradition here consists of carved pearl shell and tortoiseshell neck pendants, and body adornment of headpieces made from carvings, cassowary feathers. The Masks of the region are famed, with contemporary artists such as Alick Tipoti of Badu Island continuing this tradition as part of his art practice, and a major touring exhibition curated by Gab Titui, the cultural centre we have come to work with.

This is the first time The Indigenous Jewellery Project, working as Melinda Young (our contemporary jewellery workshop artist) and I have visited the region. But I have long been fascinated by its body adornment and jewellery. The A.C Haddon Collection, a major collection of Islander objects and artworks collected by the British zoologist and others under the Cambridge Anthropological Expedition to the Torres Straits in 1898, has a fairly extensive array of traditional jewellery from the nineteenth century, examples which had been made in the region for thousands of years.

The region is rich for the researcher, especially due to local academics such as Prof. Martin Nakata who has written post-colonial, deconstructive academic texts on his people and their interactions with the Haddon expedition and other colonial encounters.

Gab Titui Cultural Centre is a unique concept that was born out of a vision by Islander linguist and leader, the late Ephraim Bani. Originally designed as a keeping place for repatriated objects and artworks that had been taken to European museums, the centre now encompasses a regional gallery, permanent gallery, museum storage place, shop, a café run as a social enterprise to train young people and runs a program of public workshops particularly in crafts, such as weaving and beading. 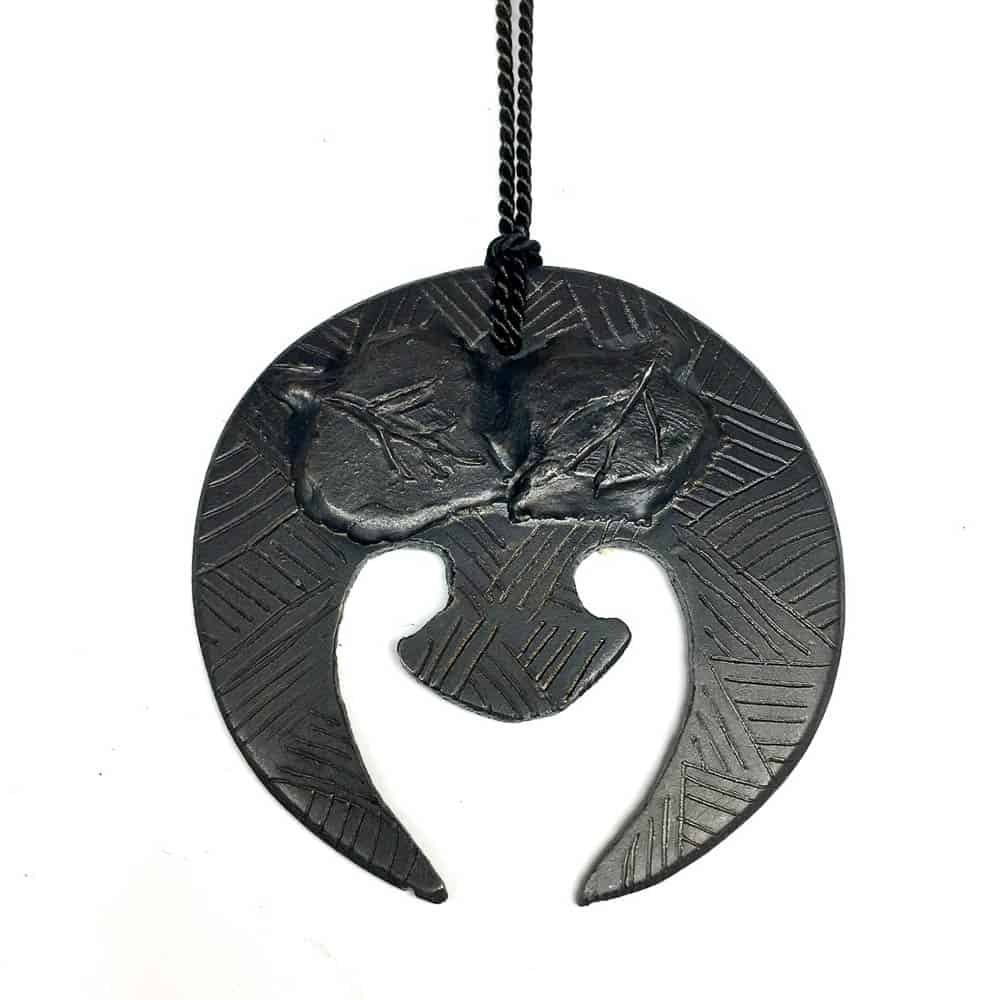 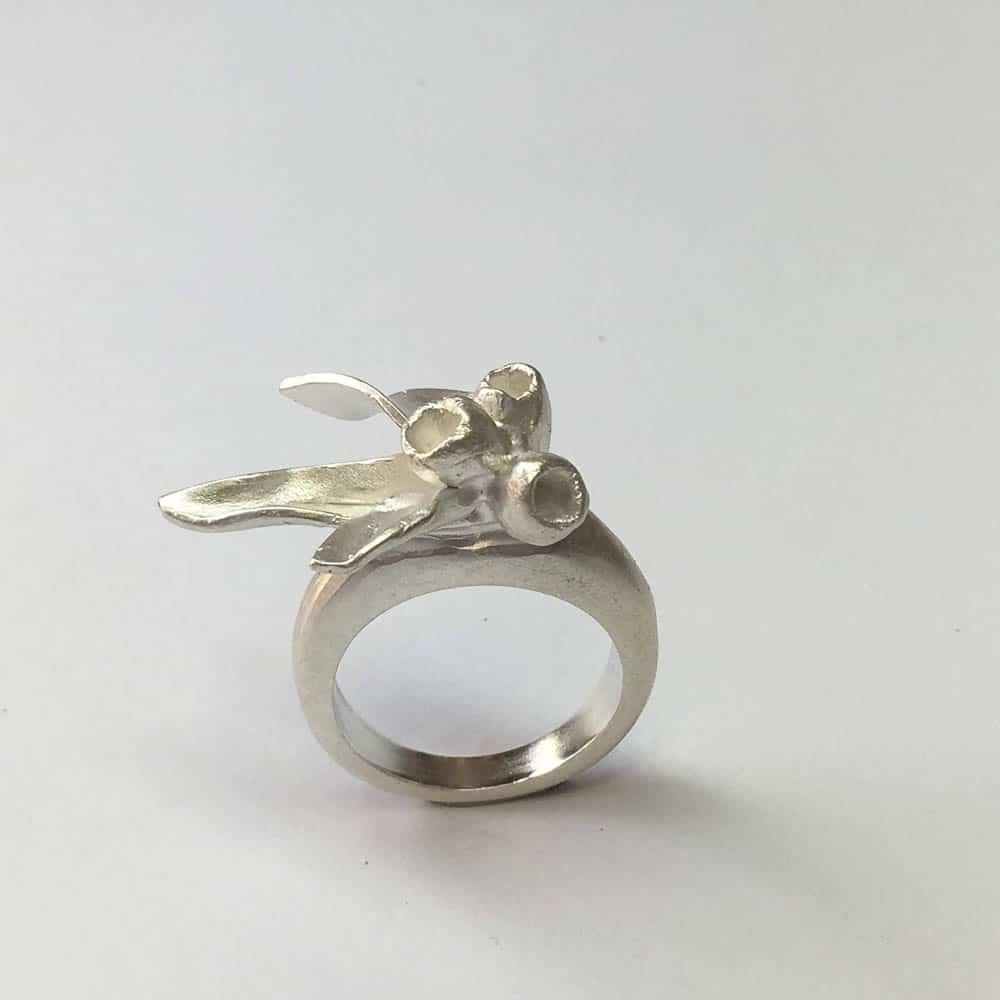 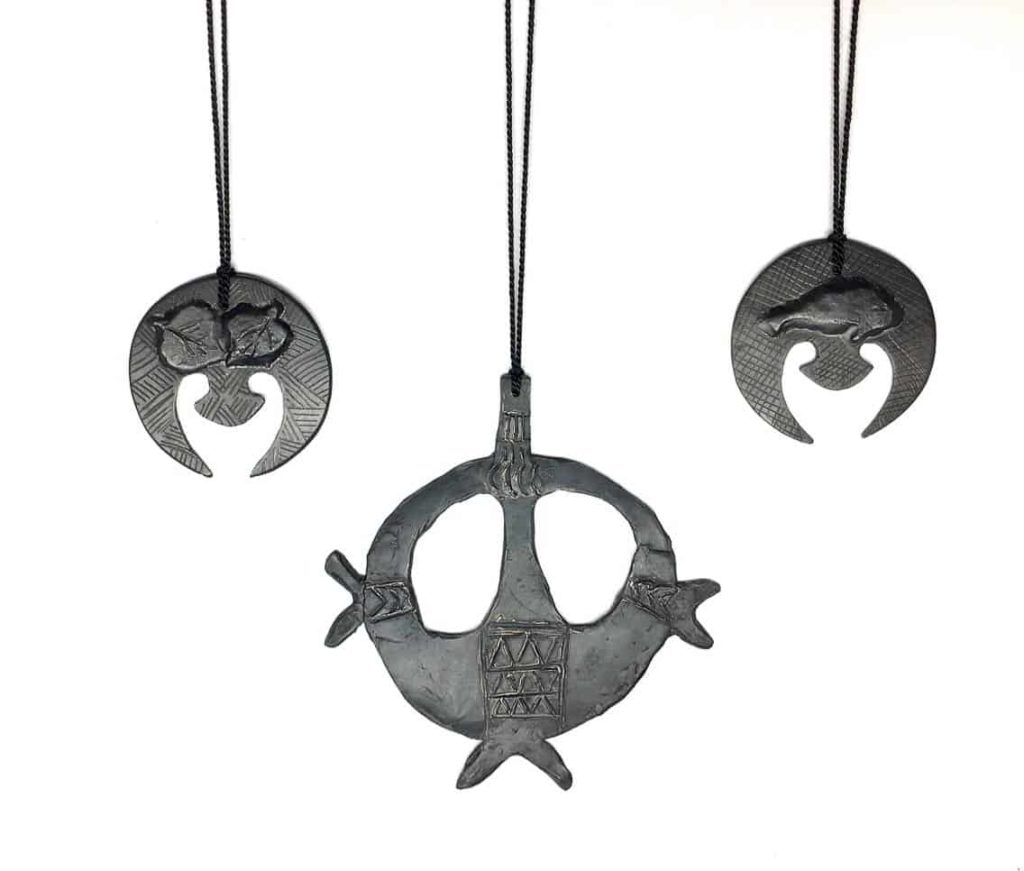 Mel has collected tools and materials and sent them ahead of time so that they will be there when we arrive. We are planning on spending the majority of the workshop on the lost wax technique for metals. This is, to our knowledge, only the second time a metal jewellery workshop has been run here: the first was by Margot Douglas, whose great-grandfather, was John Douglas, Premier of Queensland 1877-79 and after whom Port Douglas was named, and a benevolent Government Resident in the Torres Straits from 1884-1904. Margot Douglas ran a silversmithing workshop here in which one of our participants, the Hammond Island-based esteemed carver Edwin Tanner had participated.

We are greeted off the jetty by Mel Nash, Programs Officer at Gab Titui, and introduced to several artists who have arrived at the same time. For this workshop, artists have come in from remote islands: they include Nancy Pilot Kiwat, Maryann Sebasio and Rittia Tapim, from Erub, and Angela Torenbeek, from Moa. Artists living on islands close to Thursday commute every day to our workshop by ferry or boat: they include Laura Mooka, from Prince of Wales Island, an enormous, stunningly beautiful island home to few houses and a large national park, Edwin and his wife, Regina Turner, who live on Hammond, Matilda Nona from Badu, and two artists from Horn Island, the local bead jeweller Rosaline Tomasina and Emily Beckley. In addition to these artists, some of the Gab Titui staff spend some time in the workshops to gain insight into the techniques the artists will learn and aspects of contemporary jewellery we cover.

We are staying at one of the three local pubs, The Grand Hotel. The steep hill in front of it is dominated by an enormous carving of a man, a protector of sorts, wearing a traditional headdress and body adornment, surrounded by traditional thatch-roofed huts. The foreshore has impressive public sculptures and quotes from the famous Mabo family. The view from The Grand is of the beautiful sea and Prince of Wales Island. In the distance, the top of Cape York can be seen, but one feels completely away from the Australian mainland and in another world.

On our first day, Rose Tomasina blesses the workshop, and Mel begins to introduce the artists to lost wax. We have the luxury of a good sized, air-conditioned boardroom to create into a jewellery studio, and everyone has their own bench peg, files and saws to work with. We start with hard wax, and everyone learns how to make a ring.

There is a strong carving and body adornment tradition here, and other craft skills such as crochet and beading. The Torres Strait is also famed in Australian art for its printmaking movement, so the etching skills of printmaking will come in handy for working in wax.

Some of the artists have brought in their own materials and Rose Tomasina has an entire mobile artist’s studio with her. A skilled beader, she teaches workshops herself and says she is “always making”. Similarly, Nancy Kiwat and Maryann travel with crochet and other craft they are constantly working on, and Angela Torenbeek is an esteemed crochet and seed jeweller whose work is included in the collection of the Queensland Art Gallery. Edwin Tanner is a highly respected carver and commissioned throughout the islands for carved wooden sculptures, and Matilda Nona is the first woman printmaker at Badu, and displays exceptional etching and carving skills. We feel very blessed to work with a such a skilled and varied group of artists. These skills are long-held: an example of a turtle-shell ornament held in the British Museum collected from Mer (Murray Island) in 1836 displays intricate carving designs. Turtle-shell masks from Mer were created only using fire and beeswax, much in the same way as we work. Then as in now, much of our tools and materials aren’t elaborate.[1]

On the second day, we continue with hard wax, and the artists set about developing different ideas for a series of pieces: rings, pendants, earrings, small objects. They continue to improve their skills with the tools and make. Some, such as Matilda Nona, incorporate native plants into their designs.

The next day, Mel asks everyone about bush string. Due to the strong weaving tradition, we assume everyone knows this skill. Most of the artists say no, they don’t practice it anymore, so Mel teaches them. Some of the artists such as Laura Mooka pick it up incredibly quickly and immediately begin making woven neckpieces. In the afternoon, we move onto wire work, and again, individual artists show amazing aptitude for this. Rittia, who is left-handed like I am, quickly inverses Mel’s instructions for making handmade findings and makes a series of earrings. She is determined and skilled, and says she wants to master this technique: earrings are her favourite jewellery object to make.

Our next day sees us continuing to develop all these elements learnt: hard wax, bush string, wire work. Mel also instructs the artists on metal clean up and finishing. When the pieces are finished, they will be sent back to the cultural centre and a local jeweller will instruct the artists in a clean-up and finishing workshop.

For our last day, I present a short lecture on professional development and opportunities. This region is very remote, and artists don’t get the opportunities to visit many contemporary jewellery galleries, meet other contemporary jewellers and exhibit or enter awards. I let them know what opportunities exist, what partnerships IJP has established, such as with public galleries like the Australian Design Centre and Craft ACT: Craft + Design Centre, and commercial galleries, and awards.

Throughout the workshop, Gab Titui staff visit us and are intrigued and pleased at the progress and work made. They document it and we discuss ideas for the future. We dream of doing a road trip around Aotearoa New Zealand, a mecca for much contemporary jewellery, visiting artists, studios, schools and galleries. The artists and facilitators at Gab Titui look outwards to the world as much as inward, and love to travel and engage with other cultures.

Leitha Assan, the exhibitions and programs manager for Gab Titui, discusses future ideas for the project. Leitha is a talented curator, and she and I would love to work towards the curation of a major exhibition for this project for Gab Titui’s public gallery.

I ask the artists if we can name the project, and together, with phone calls made to local linguists and cultural leaders, they conceive the culturally appropriate name: Gamu-Keub Keub: Body Adornment. This name incorporates both major language groups, the Western and Eastern languages, and thus we have created our project concept and name. Matilda then starts recreating a traditional earring, and artists create traditional tortoiseshell bridal pendants, as seen in the Haddon Collection, but in lost wax for metal.

It amazes me the way one simple suggestion can set off an entire series of making, often of endangered or extinct objects which have not been made for years. 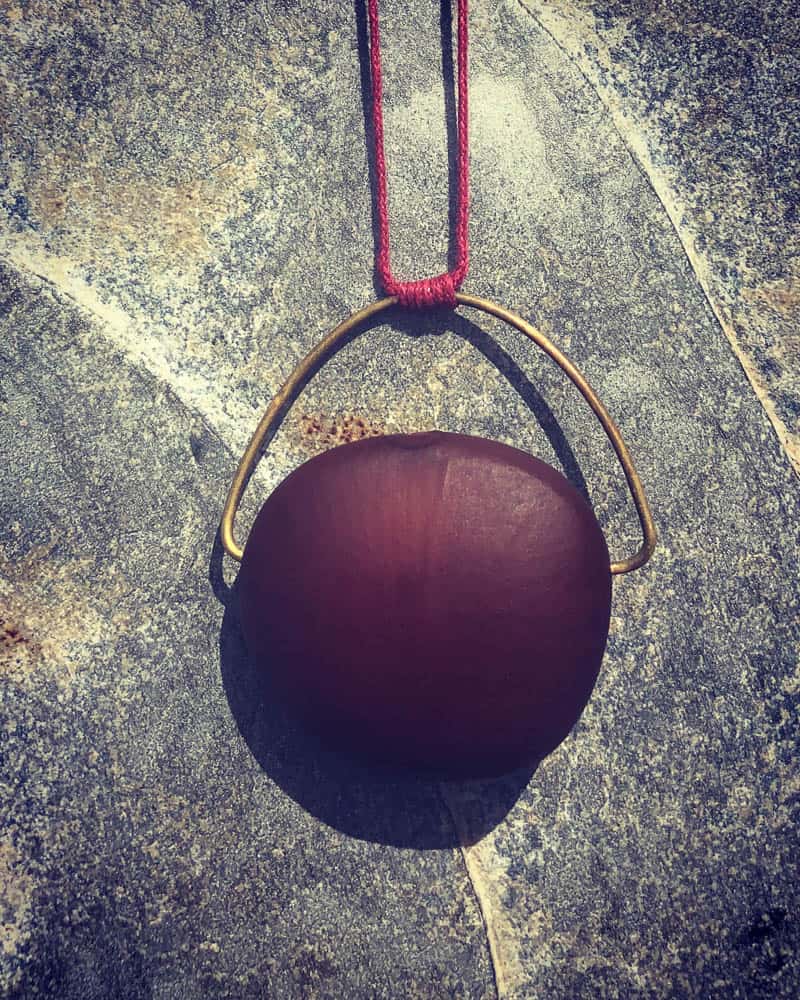 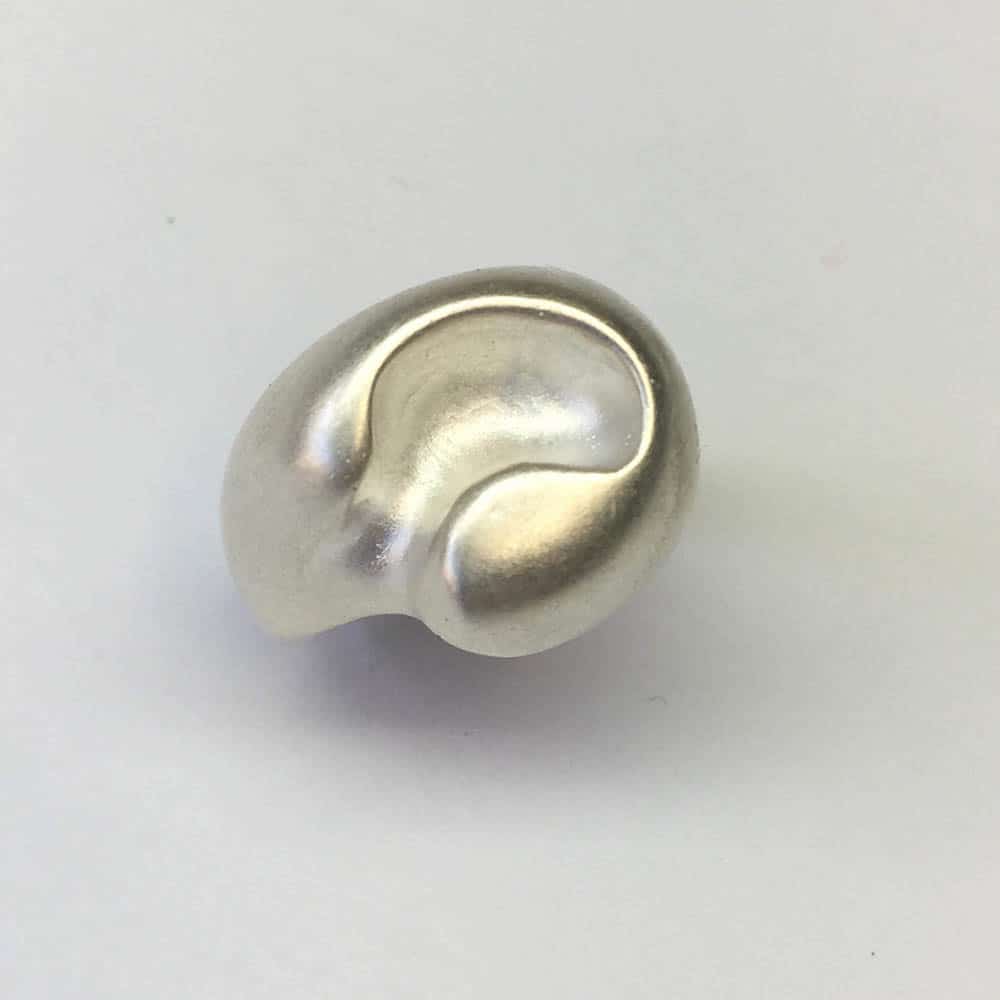 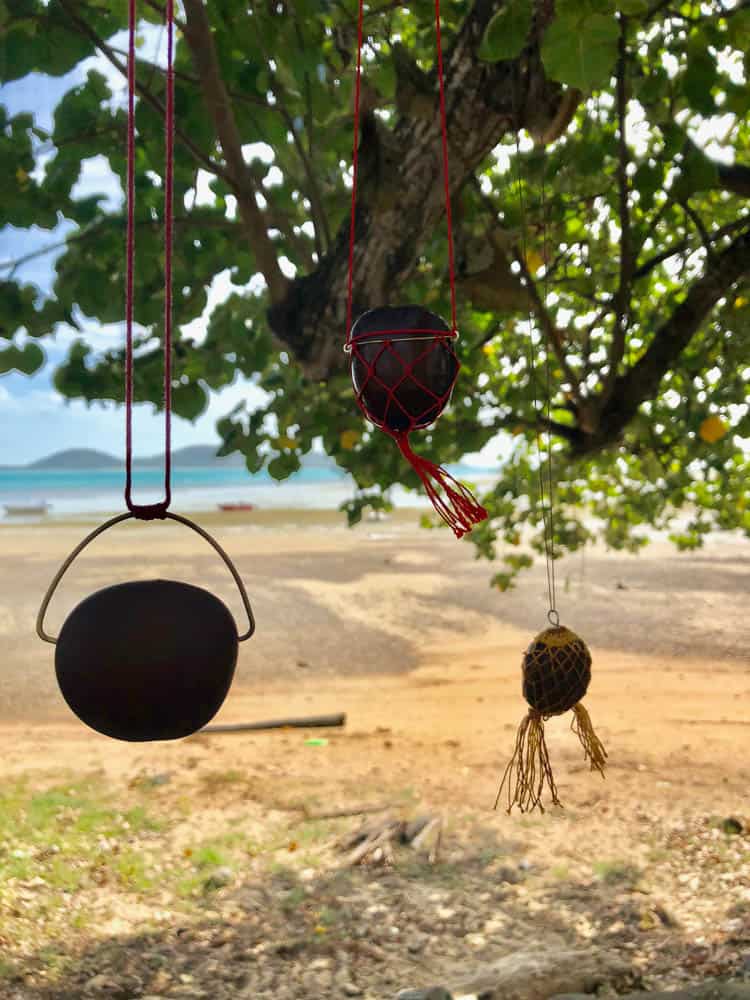 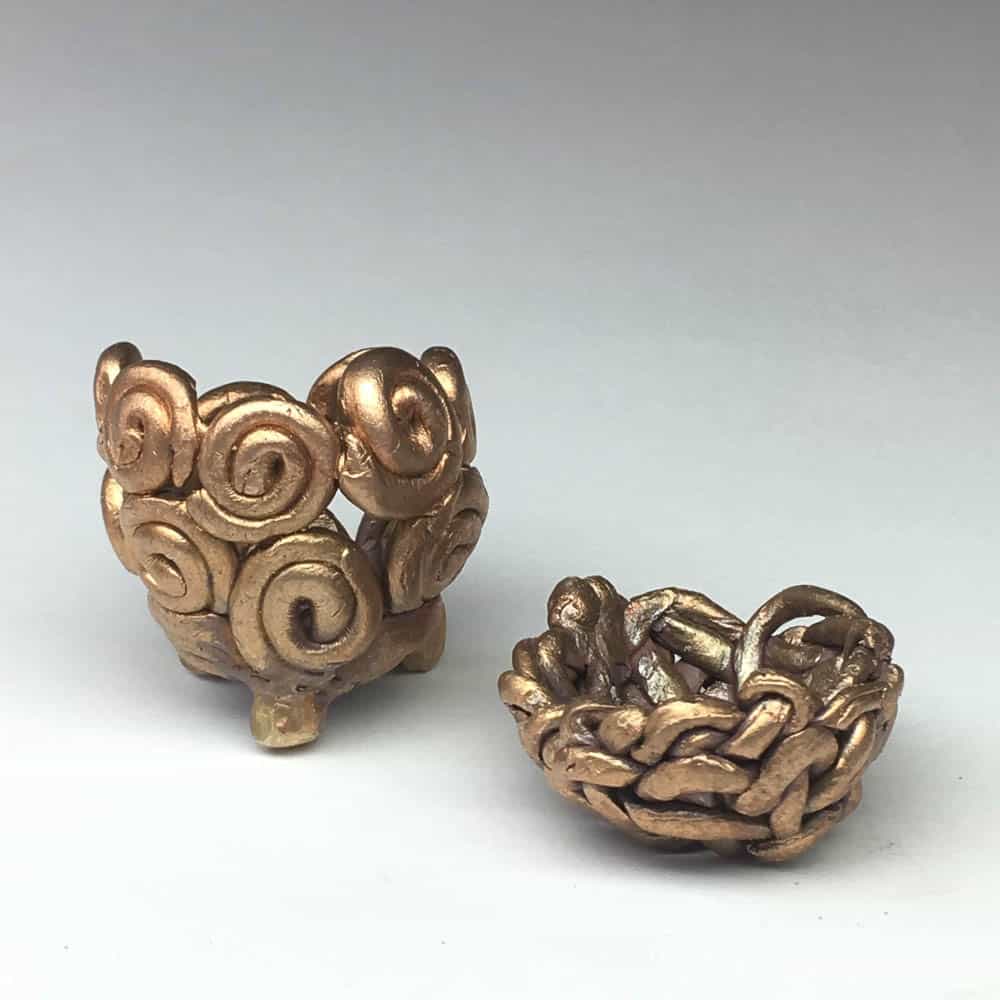 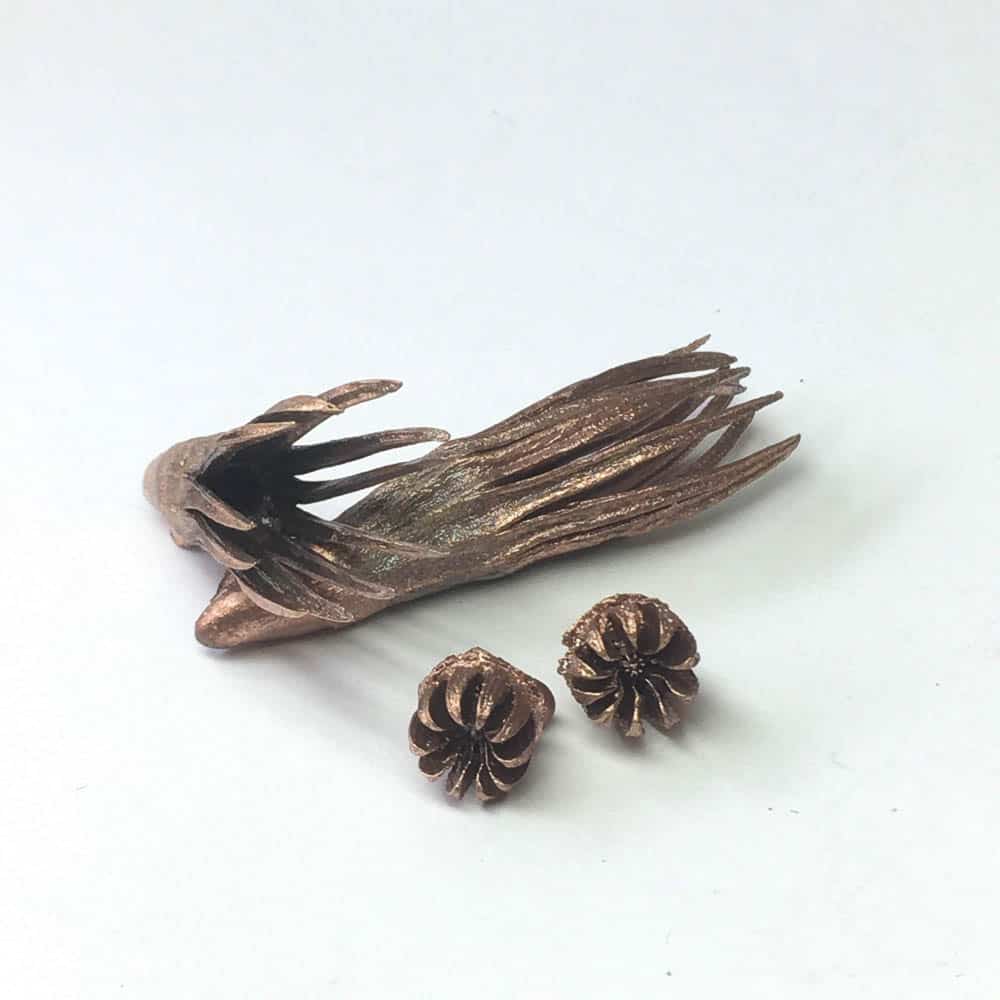 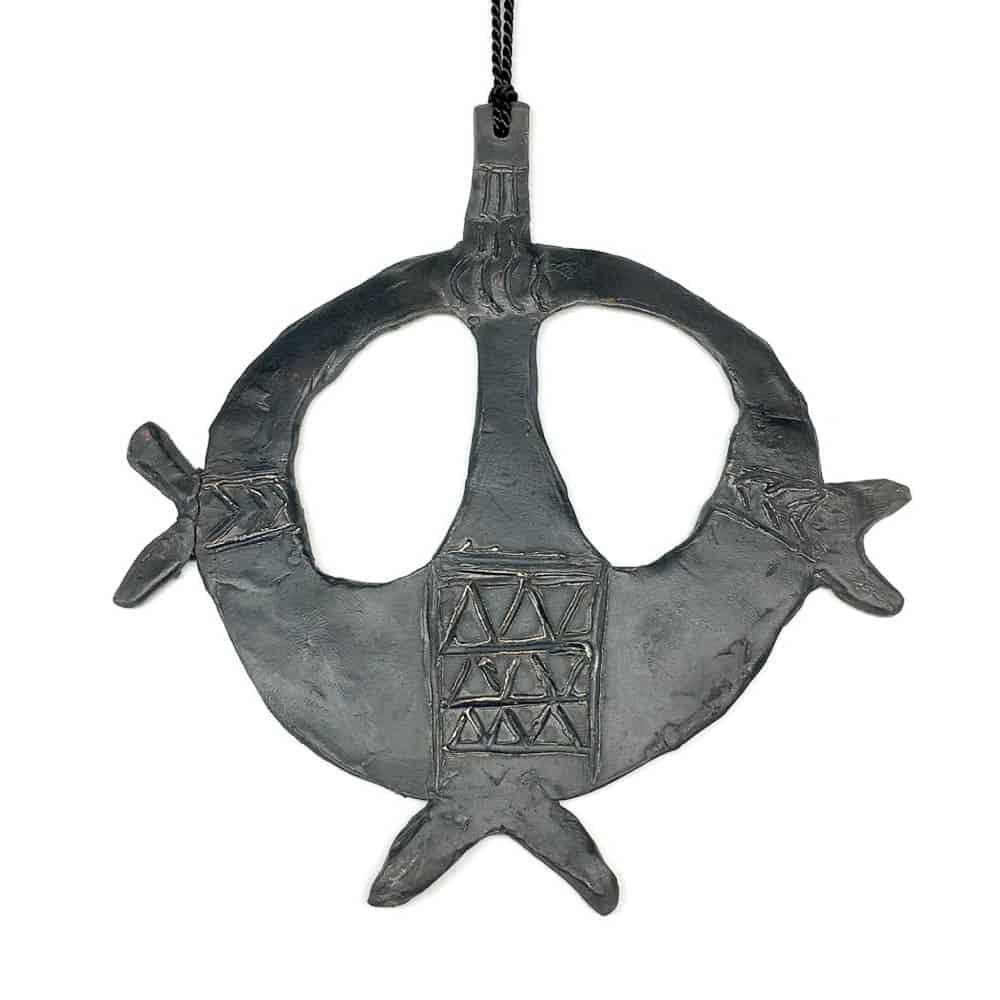 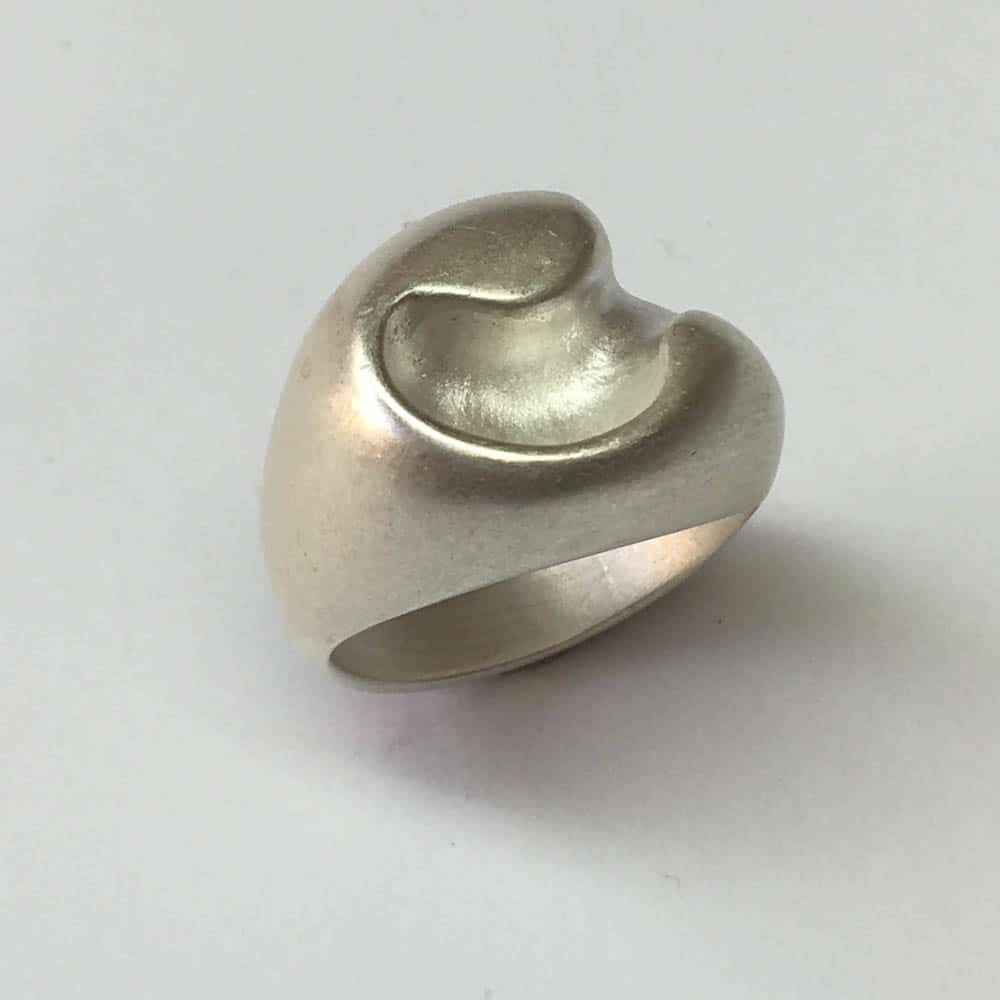 At workshop’s end, Mel and I spend the Saturday packing up the tools and documenting, photographing and packaging the pieces made to be sent to the foundry. The next morning at breakfast, Nancy and Maryann are weaving neckpieces at breakfast, using a travel card, which we encourage them to incorporate into the neckpiece. As we are on our way to fly back to the mainland, Emily Beckley meets us at the airport with a box of waxes she has made in the last day, including a stunning large traditional bridal pendant. We encourage her to continue, as our now catch cry of departing words “keep making, send us more!” carry off on the breeze as we head across the tarmac to the plane.

To see more of this project and The Indigenous Jewellery Project, please follow us on Instagram theindigenousjewelleryproject 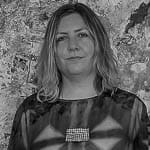