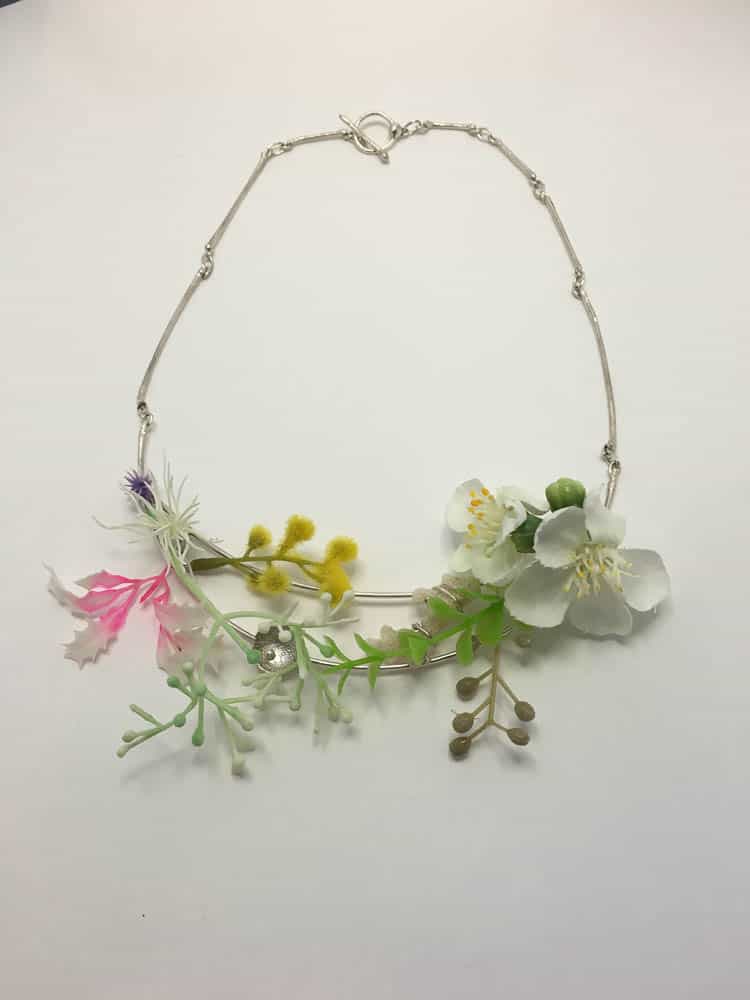 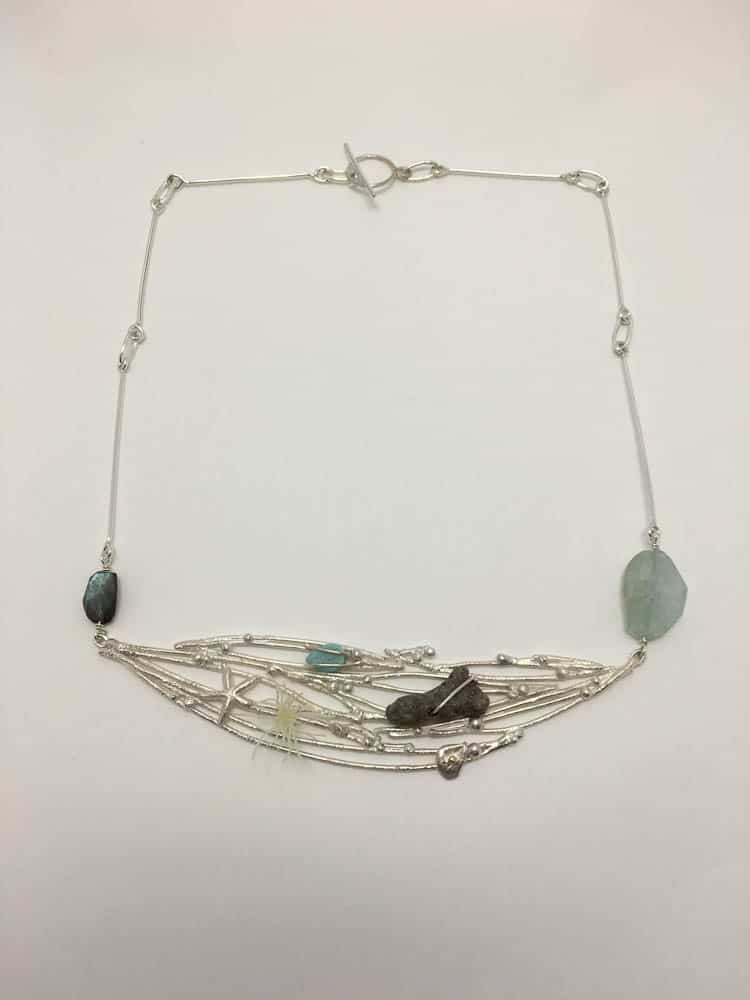 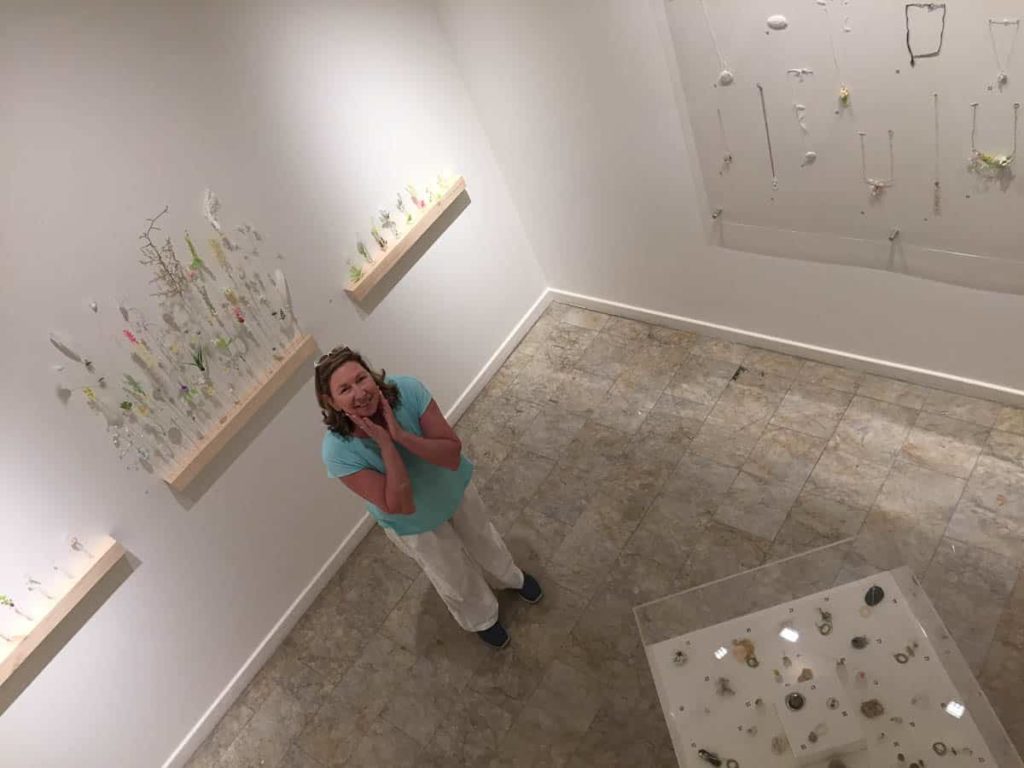 Artist Kate Hunter views the final installation her show of All that Remains , photo is courtesy of Ashleigh Campbell 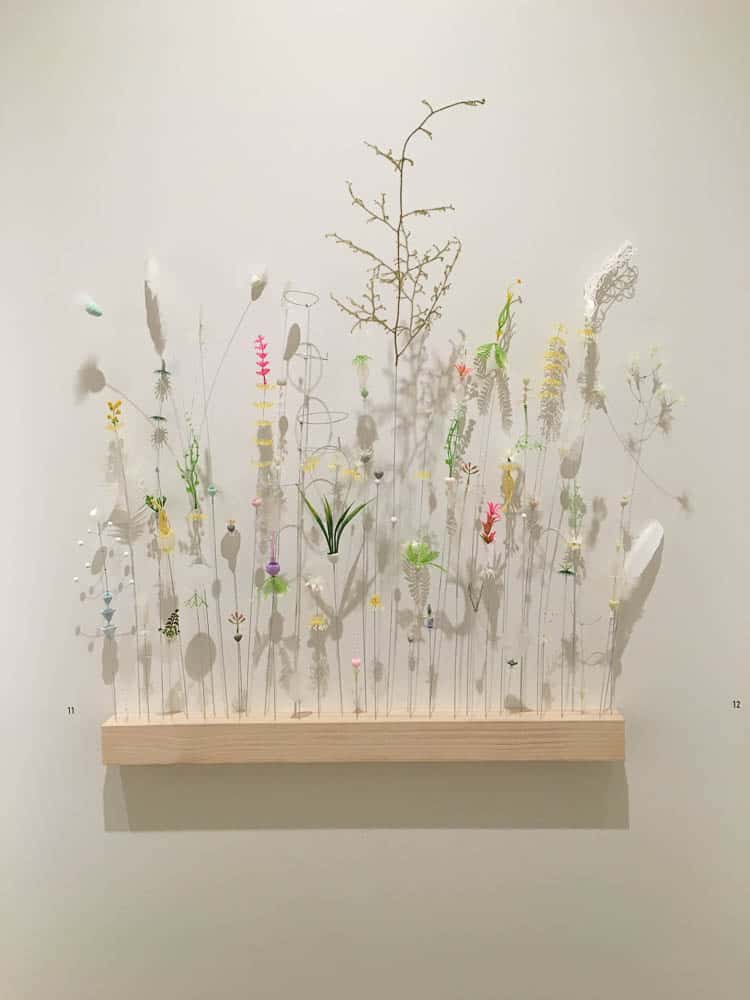 Sitting in her working space, tucked into an alcove of her home at one of the spectacular northern beach suburbs of Cairns, Kate Hunter smiles broadly.

“I love the place I work,” she gestures toward a sunlit workbench covered in small precision tools and a spread of brass and silver earrings in various stages of construction. Just beyond the strewn countertop, large glass panes afford the natural light and a view to the surrounding exotic and verdant tropical world. “This is my happy space,” Kate says.

“I live right on the edge of a fragile, unbelievably beautiful ecosystem, that constantly inspires me.”

She says the natural surroundings deeply affect her, and so ultimately her work.

Kate, experienced silversmith, qualified mariner, motivated environmentalist and a cross medium artist exudes a kinetic enthusiasm that is a palpable force, an assured strength and confidence expressed in multi-faceted talent.

She talks about her most recent exhibition at the Cairns Regional Gallery in October and November of last year, All That Remains, which was an astonishing fusion of delicately smithed silver and recycled objects.

“Part of my career was spent as a merchant marine in engine rooms and on decks of tankers,” the artist explains.

The vast surface of the world’s seas was another fragile ecosystem where Kate spent time; more than 15 years.

“Traveling across those beautiful oceans I became aware of the huge vortexes, called gyres, of plastic pollution that accumulate, and began to think about how that plastic breaks down into small bits, affecting the delicate balance of marine life below.”

All That Remains is Kate’s insightful exploration of how we have affected the blue depths of our planet. A collaboration of finely smithed silver and copper merged with tiny plastic flowers and shells, it was a magical, almost winsome collection of jewellery and objets d’art. It featured dreamlike creatures and imagined plant forms, in an evocative fantasy of a fragile and beautiful underwater world.

“There are animals and marine species in the deepest part of the oceans that remain undiscovered, and that idea was inspiration for one of the larger pieces of the collection; Aquatica,” she says.

“I thought maybe the future of tree survival could be found in the creation of synthetic leaves that can replace those damaged by pollutants.”

“I wanted to experiment with the idea that it may be possible to use recycled material to fix things environmentally,” she says dreamily.

As a Cairns artistic entity, Kate has notoriety.  Her signature handcrafted silver jewellery pieces, which vary from simple and elegant to mixed-medium quirky, are sold at both the Cairns Regional and Centre of Contemporary Arts gallery shops. Both retail outlets display the jewellery of only a select few.

She manages to stays close to her custom; personally running market stalls in the languid prestigious tourist destination suburb of Palm Cove, and at the nationally famous Tanks Markets in the Cairns Botanical Gardens precinct. Both are Sunday morning events, held monthly April- November; both allow only local craft, art, produce and services. Cairns residents and tourists alike, flock to these now famous bazaars, by the thousands annually.

“My stall displays began as a marketing research project, an opportunity to gauge which of my jewellery designs were most desirable,” she says

“I first trialled the open air markets in 2014 and found that tourists and locals bought my pieces in equal measure.”

According to Kate trying to compete with Asian-made silver rings and earrings set with gemstones is futile.

“So I make pure basic silver with my own little twist. I create staples – rings, earrings and bracelets – again and again, each time with slight changes.”

With the 2017 season looming, Kate plans to add a new dimension to her monthly display of wares.

She lays out a smorgasbord of little dishes and tiny vases, which are she says, experimental, and part of the inspiration and preparation for her coming show, The Lay of the Land, to be held in September at the Center of Contemporary Art, Cairns.

As she explains her ideas and methods for the show, which is destined for the Jim Traynor feature wall of the KickArts gallery, Kate makes seamless connections across her memories and several mediums, tapping into her past and present mindset, while focusing her creative energy on a singular inspired theme.

This process is, it appears, is the foundation of her professional hallmark.

She admits it’s a small dish addiction, and a delight in making things with her hands, that led her to modeling clay miniatures. Cross pollinating the vision for her diminutive pots with the motifs from notebook drawings made several years ago on a pilgrimage to her parent’s farm in Orara, in the hinterland of Coffs Harbour, resulted in this series of tiny exquisite sgrafitto dishes and collection of delicately scarifed silver earrings.

“The airplane window on the trip back to my family home just after my mother died, offered a view of the land that suggested visual waypoints in the landscape, showing me the way home,” she says.

“I made drawings of those patterns and directives in my notebook and gave them titles.”

Once she arrived at Orara, Kate became immersed in sorting her mother’s estate. On her return to Cairns, grief became a powerful motivator. She threw in her job working for a commercial jeweller. And despite earning a Bachelor of Design, Jewelry and Metalsmithing, in 1984, she took up painting and sculpting, enrolling in a Visual Arts Diploma at TAFE, in order “to clear out the cobwebs”, she says.

The first showing of her work in Cairns in 2015, through a collaborative show with other graduates at the end of her visual art training was held at the Cairns Regional Gallery. The pieces were a salute to her maternal memories and entitled, Conversations with My Mother.

Even though the inspirational homeward bound journey was made in 2014, the images, Kate says are fresh and remain valid, currently sustaining her preparation of for the coming of Lay of the Land.

“When I made that trip back home, I made a lot of notes and drawings, and they became the anchor for the ideas that continued to float somewhere in my consciousness,’” she says.

“Those drawings and those little landscape maps so deeply imprinted in my mind, are beginning to surface, and with the aid of the accompanying to scale drawings of design ideas, I am creating the new pieces for my coming show.”

As her strong capable hands handle the fragile biscuit-like pieces of her newest work, she appears much like a mother demonstrating love and tenderness toward her children, caring for the smaller versions of the best of her, and her dreams.

Kate Hunter remains dedicated to her artistic journey and right on course.

Hanging issues: Collaboration between photography and Lana paper making
Call Them Home
What makes the cotton made by TaiLeu so good?
Mutagenesis: Wiring up Dutch tradition
I wear letters from the past
Rainbow Serpent art from Pormpuraaw
“Only room for one in the house”: My Ankyianpoma language sticks from Ghana
We are all Merantau: Macassan journeys