Kuulua vuohmaan: Belonging to a mire 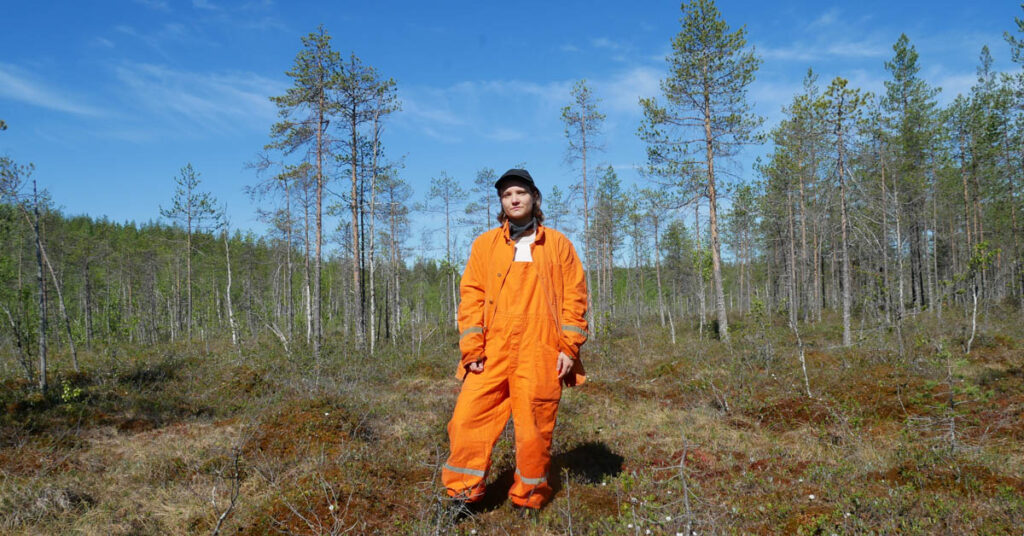 Ida Isak Westerberg returns to the queer space of mire in order to recover their Tornedalian identity, imprinting their tapestries with its colours.

(A message to the reader in Swedish.)

I walk through the forest. It’s the end of August, it’s still quite warm and the morning dew shimmers on the trees. There are a few more weeks of summer before the leaves on the birches start turning red and yellow. I am following a trail that many feet, hooves and paws have wandered before mine, wearing clothes that cover my body as protection from all the mosquitos and black flies. After a while, I leave the path and walk across moss and bilberries and old dead trees and finally, the forest is opening up before me. In front of me, there is a small mire. I jump over a ditch and then another one before I start to walk across the peat. My boots are sucked into the ground and when I am lifting them up they leave the ground with a splashy sound. I have arrived.

I’ve been focusing on the mire in my artistic work for four years now. In the beginning, I didn’t know why I was so attracted to bogs and swamps. Now I have realized that while working with the mire, I have found a queer space where I am embraced by resilience, resistance and time, where the damp moss invites me in, offering possibilities I never could have asked for. The peat whispers to me in meänkieli and I know that I belong in so many different ways.

It all started through a collaboration with Anna Classon in 2019. We were curious about the wetlands as a multi-layered environment but didn’t really know how to approach it. We decided to focus on the biological processes of the mire. The layers of peat have different effects; in the oxygenated upper part, you will find a decaying process, whereas further down, in the constantly wet layer that can be several meters deep, you will find no oxygen and is therefore a perfect place for preservation.

I remembered reading about Bockstensmannen being found in a bog 700 years after his death thanks to the humic acids in the peat. Inspired by this, I got the idea to bury some woven pieces and see if anything happened to them. I decided to do this in a forest outside Övertorneå where my grandfather worked all his life, an area that is now managed by my parents. This area includes a small mire which in a few years might be considered more like a swamp forest. Old small pines grow there which, most likely, will never grow larger since the preconditions required to develop a root system or get nutrition from the ground don’t exist. I feel like one of those pines, who don’t get enough energy but still struggle and grow even if the surrounding circumstances are hard and challenging. A little creature in the world who just wants to exist. 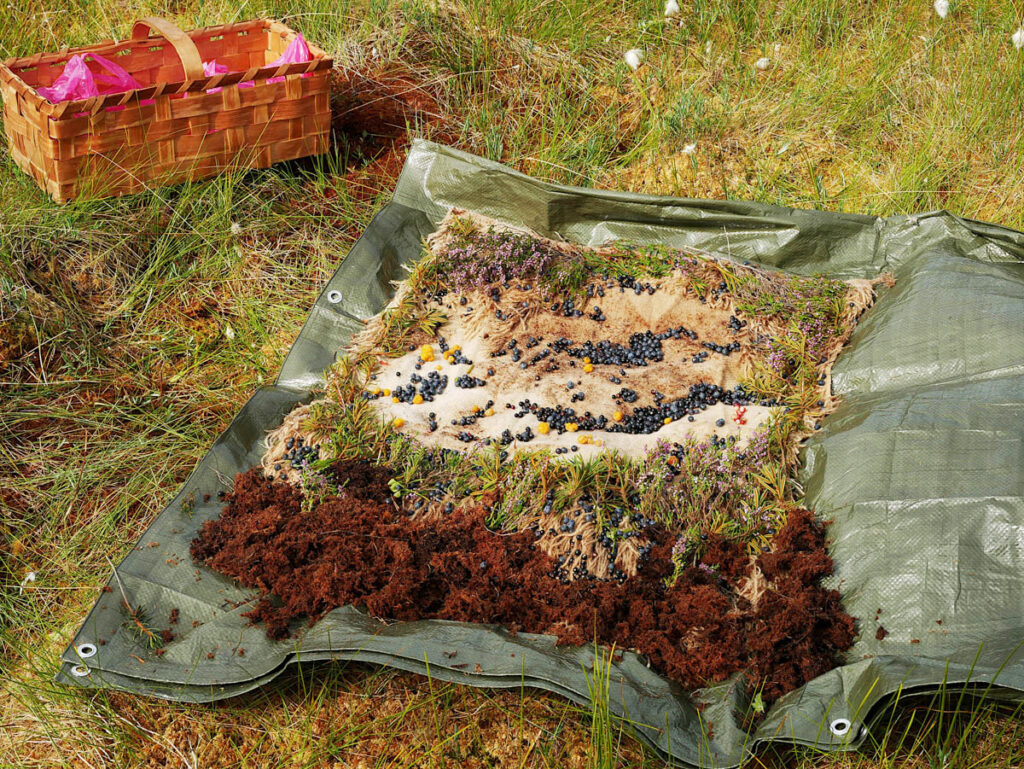 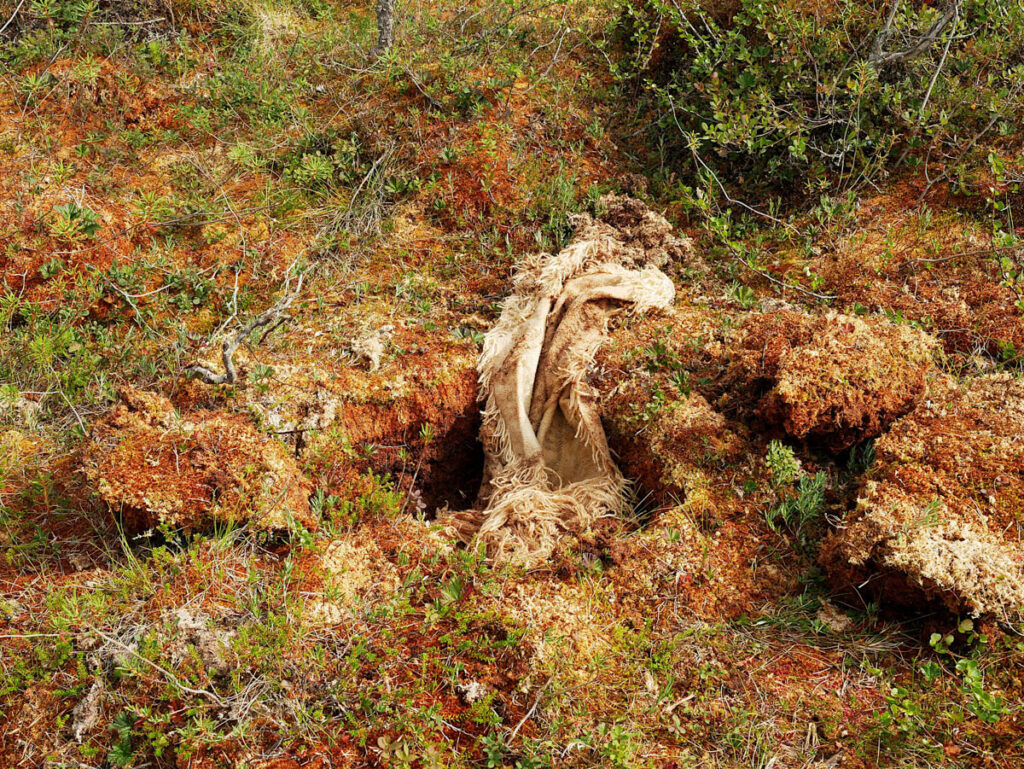 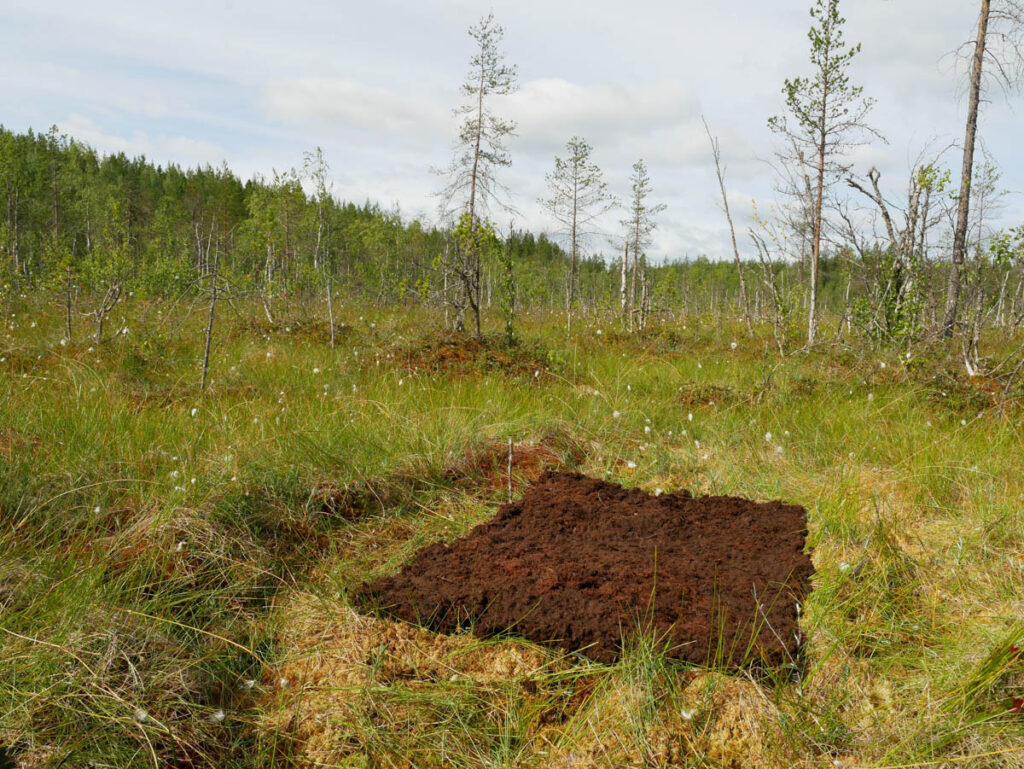 The land consists of moss beds with plants such as crowberry, cranberry, bog rosemary, dwarf birch, bog whortleberry and cloudberry. Between the tufts, you can find sphagnum, sedge and sundew. Here it is wet at the beginning of the summer, but it dries up gradually. Along the edge of the mire, masses of labrador tea, heather, birch and pine grow. An old ditch runs through the mire, with a regrowth of more marsh-like character with neon-green glowing moss and hare’s-tail cottongrass.

I went to the mire and started digging. The feeling of my spade piercing the moss and the rocking ground beneath me was intense. The mire had attracted me before, but now I realized how little I knew about how life here worked. It was like I acquired brand new knowledge there and then.

After that, I just wanted to go back, again and again. In addition to burying woven pieces and yarn, I sun-dyed yarn with plants and water out on the mire. The mire season is short, it is only a limited time of the year that I can be active in this collaboration, from when the frost leaves in May, to early September when it returns. Every time I make it to the tiny mire, euphoria hits. I have learned where the mire is wettest, which tufts bear a lot of cloudberries and where I find the most bog whortleberries. The mire has carried me when I was at my worst. It does not try to please anyone, it’s there in all its discomfort. It looks dry but as soon as you put your foot down you are enveloped in wetness. The smell from the sour peat, the perfume-like scent of labrador tea, the feel and sound of the boots getting stuck in the moss, these are such concrete sensory experiences that force me to react and pay attention. Through the collaboration with the mire, I am working with the forest, although with a different kind of forestry than my grandfather did.

My grandparents both grew up outside Övertorneå. The first language they learned and spoke at home was Meänkieli but due to the Swedishization (see below) they were forced to speak Swedish when starting school, even though they had never spoken the language before. Until the sixties, this was a forced process to incorporate Swedish as the correct language and for a significant time Meänkieli was regarded as ugly and shameful. Because of this, my mother only speaks Swedish. When I was a child at my grandparent’s house, my grandparents always spoke Meänkieli to each other. Even though I never understood the language, it’s a part of me and brings a feeling of security. Every single time I’m at the local food store in Övertorneå and hear Meänkieli, I feel at home. Tornedalen is part of my identity and it is getting stronger and clearer every day. 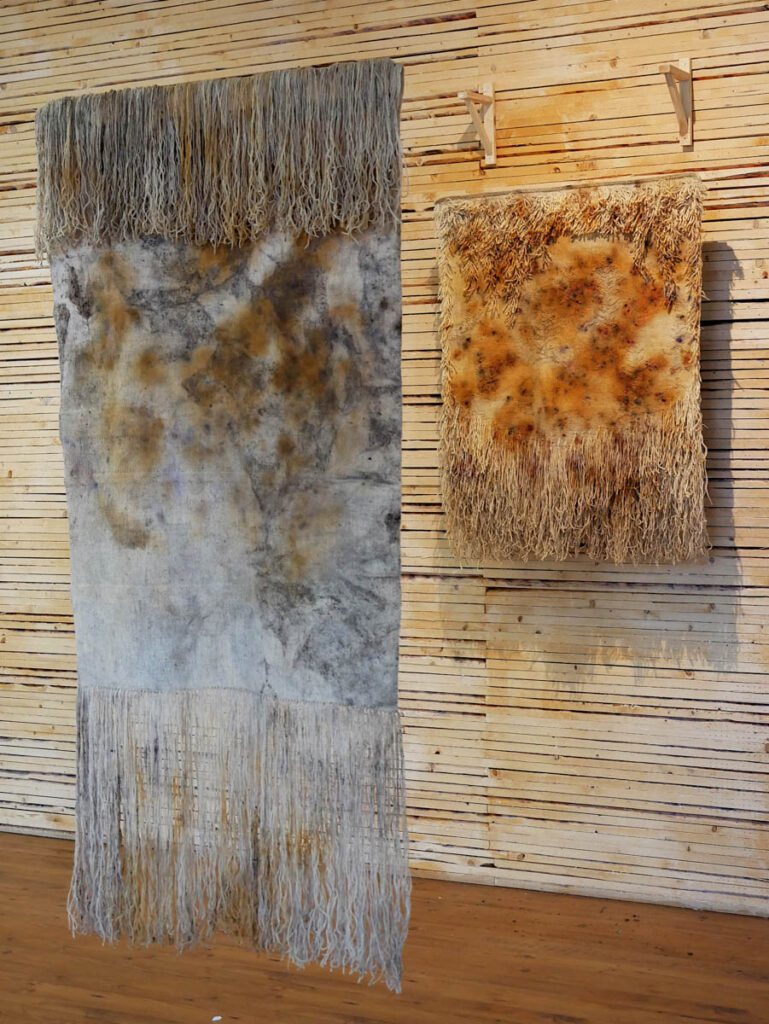 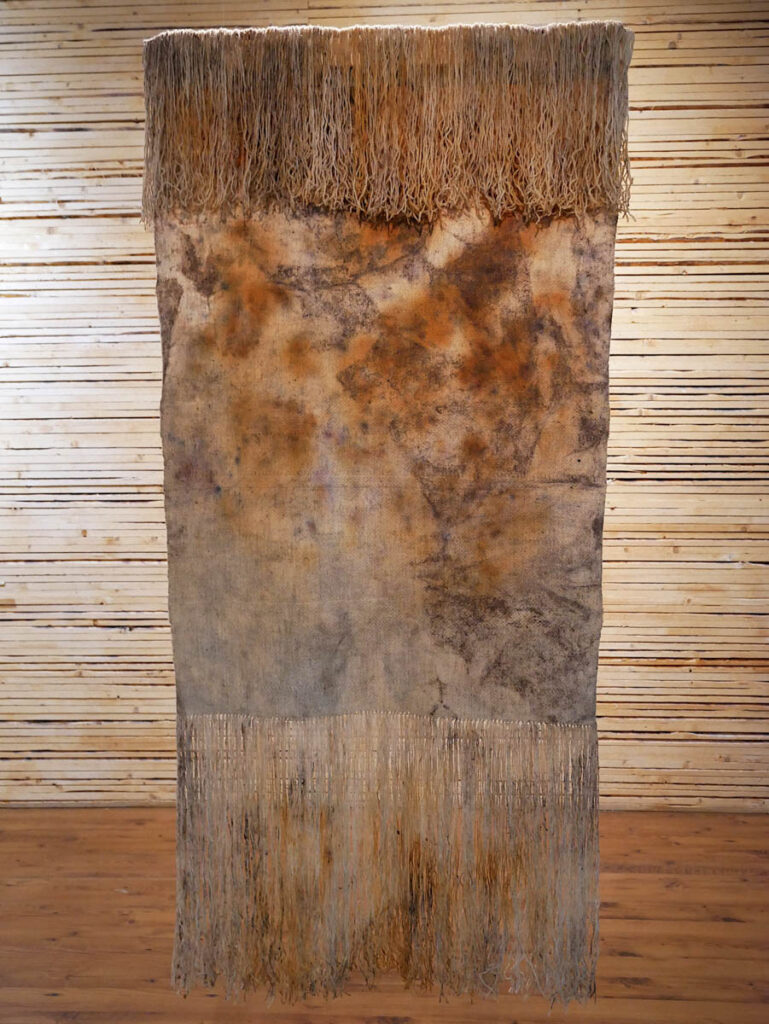 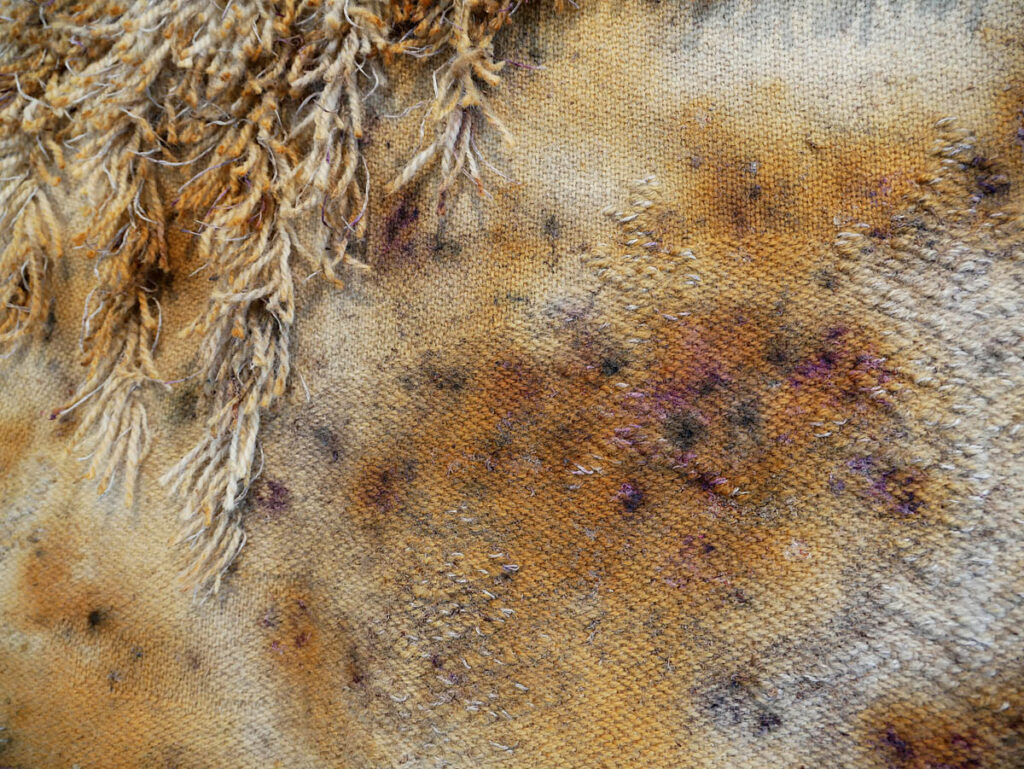 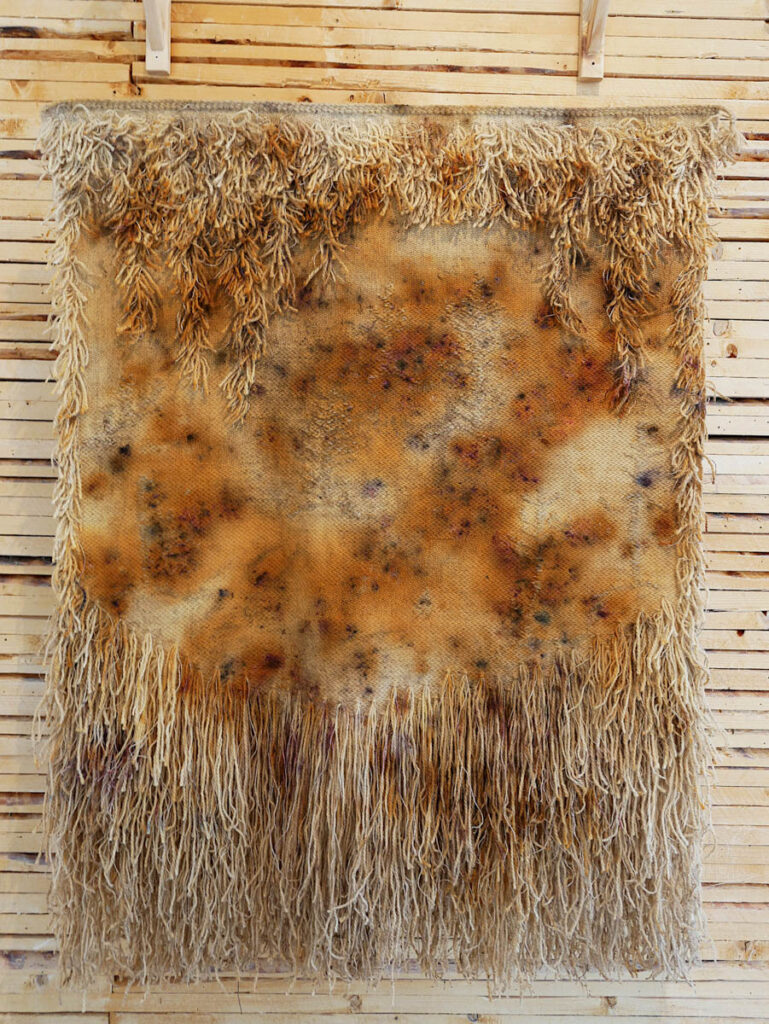 The mire that I am working with is called Sompasenvuoma (the swamp’s mire in English), and to this I dedicate my work that will be shown at the Luleå biennale. The work consists of two parts that I worked with during the summer of 2021. The first part is a woven tapestry in which I portray the mire and its small tough pines. The second part is a flat woven tapestry which, in its stripes, can be connected to the rag rugs and rana tapestries that are common in Tornedalen.

The tapestries were woven in white and beige wool. When they were finished I dug them into the mire, and for a month they lay buried in the peat and got charged with the power that peat possesses. When I dug them up, I placed one of them on the ground and put berries and plants that grow on the mire on top of it. To cover it all I put the other tapestry on top. Then I covered it all with tarp and a layer of peat that was heavy with all the water it had absorbed. It was so dry that summer! The bog was so dry that the sphagnum has turned white and crisp. The shoes didn’t get stuck in the moss and the mosquitoes were a thing of the past. I thought to myself that it can be gorgeous but it can also rot. A lot was unclear and that was so damn exciting. The pieces sat like that for ten hot summer days before I came back to retrieve them. At that stage, the fabric had absorbed the dyes from the plants. On top of the images I had woven into the pieces, the mire had now made its own pattern and told its own story.

Even though you lost so much of your culture, your language, your history and identity due to the Swedishization processes, the land remembers. The soil, the trees, the watercourses bring you home again. They sing your name along with all the names you are intertwined with. They welcome you, ground you and give you context. That’s what happens when I work on the bog. Sompasenvuoma helps me conquer my Tornedalian identity. It strengthens me and gives me keys that can neither be translated into Swedish nor Meänkieli. By physically being on, working with and becoming a part of this mire, it feels like I have also dug deeper into the Tornedalian soul. I feel that I belong to this place, as much as the place belongs to me—we belong to each other.

Ida Isak’s weaving features in a dance performance this year in Luleå. 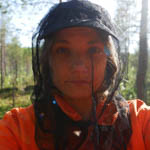 Ida Isak Westerberg lives and work in Norrbotten, Sweden. With a diploma in handweaving from Friends of Handicraft, Ida Isak wants to challenge expectations of what weaving is supposed to be and look like. Through weaving they work with themes such as spaces, identity and belonging, especially focusing on the queer community and the Swedish minority Tornedalians. Visit idaisak.se and follow @idaisak

The eel as a totem and symbol of resilience
Roof top alchemy: Gilding statues in Nepal
How the dye was cast on the road back to Laos
The case for wood
Learning from a master: Making bilas with natural dyes in PNG
Beyond the screen: Glass bodies in making
Spacecraft ✿ A future from what remains
Vivalto Lungo: Espresso bridal jewellery