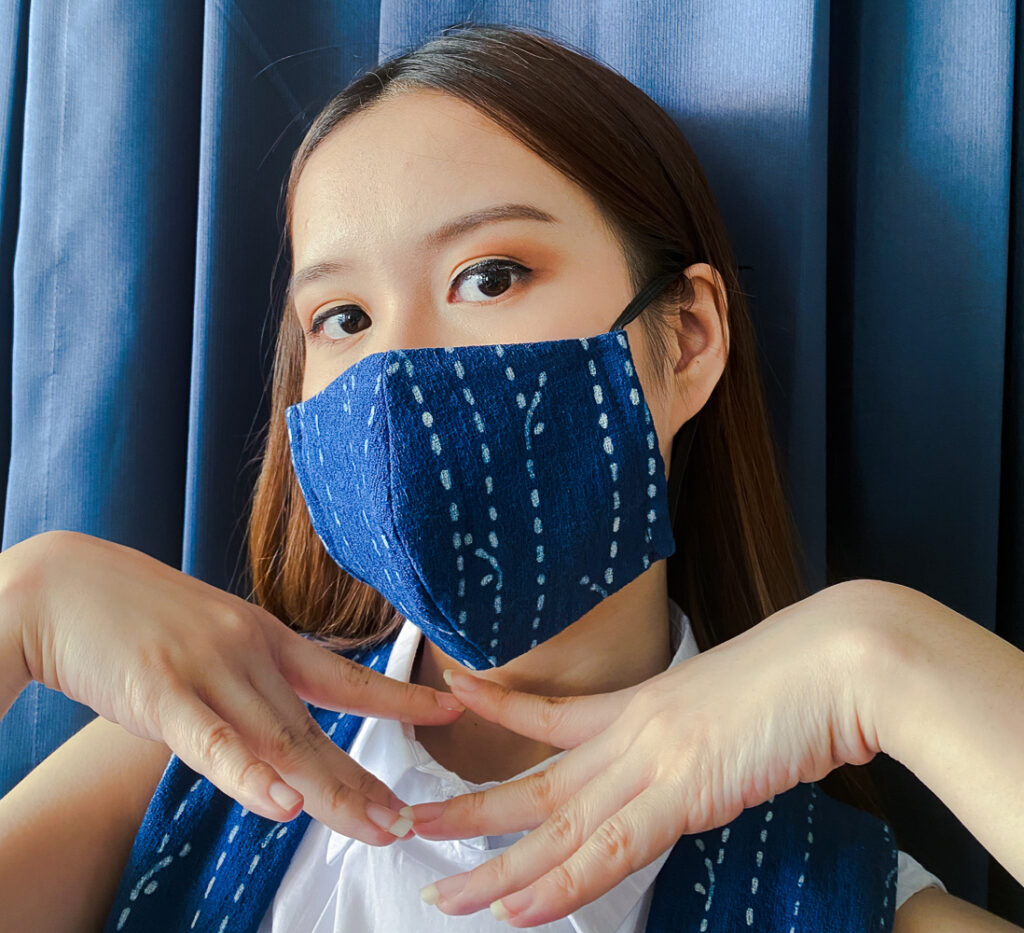 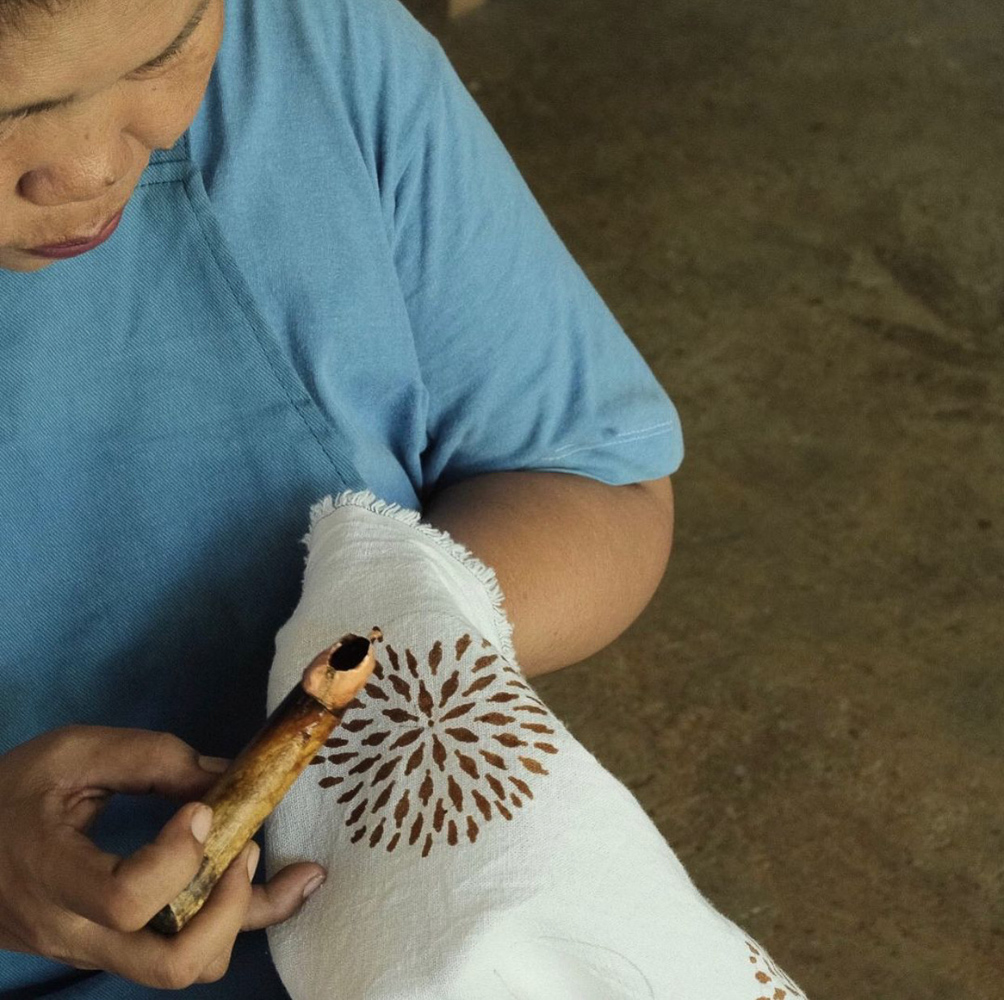 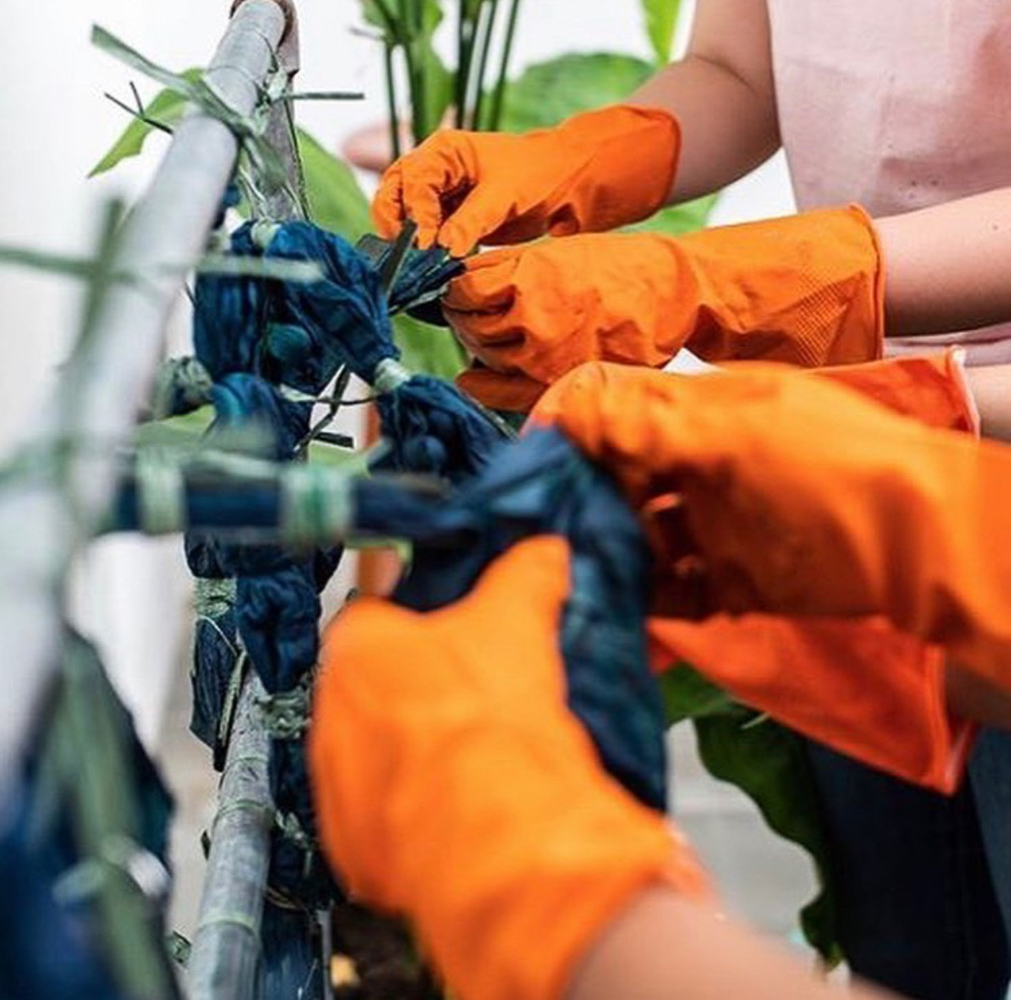 Janet Teowarang writes about a collaboration between industry and students keen to develop sustainable fashion.

I first encountered the process of tie-dye as a fashion student in Singapore back in the mid-’90s. At that time we still used synthetic colouring without knowing that liquid waste is harmful to the environment. The word “shibori”: was not popular among youngsters because during the 90’s plenty of Western trends influenced the fashion and textile industry therefore anything produced fast, machine-made was much in preference.

The tie-dye process, also called jumputan in Indonesia, has been well known among art and craft lovers, including the fashion industry. The presence of tie-dye became a trend in the 60s and 70s with ethnic characteristics combined with Asian and Middle Eastern cultural influences through silhouettes, exotic motifs, and kaftan-style clothing.

Tie-dye variations are very diverse. There is the bandhani technique from India, which is a very traditional tie-dyeing technique, namely decorating textiles using natural or synthetic dyes and finger tools resembling very sharp nails to make small ties to form decorative designs on the fabric. The term “bandhani” comes from the Sanskrit verb bandh, which means to bind.

Next is shibori from Eastern Japan who uses natural blue colouring called indigo. Meanwhile in Indonesia, we use tarum leaves (daun tarum/Indigofera Tinctoria) as the plant to produce natural blue colour (Teowarang, 2020). The clamp-and-dye practiced in Japan is called shibori where this technique is considered to be one of the oldest indigo dye techniques in Japan. Originating in China, shibori dyeing gained mainstream traction in Japan during the Edo period from the 17th – 19th centuries, as people from the lower classes needed an alternative to the silk that they were banned from wearing. Shibori artists use thread to isolate many small repeated points on the fabric, after dyeing these spots of colour create captivating designs that tend to be far more intricate and detailed than modern tie-dye (Dayman, 2019).

Indonesian independent textile makers are creative with their knowledge and skill derived from the crossroads of east and west culture into their creation. The interesting part is they can customise the foreign culture influences with Indonesian culture, for instance, shibori indigo dye technique with batik tulis (hand-written batik), eco-printing technique with batik, and many others.

Kana Goods, an Indonesian textile maker with sustainable practice and concept, was founded by Ibu Sancaya Rini who was from an agricultural background. However, she was passionate about learning batik and natural dyeing. By the year 2006 Ibu Rini started teaching her village communities how to make batik with canting and shared the ideas for selling their batik creation. Later in the year 2007 Ibu Rini was suggested by her students to establish Kanawida, which means “colourful” from Kawi language (bahasa Kawi). Bahasa Kawi is the oldest Javanese language. Her passion for batik with natural dyeing has brought her the KEHATI Award in the year 2009 as the winner for “Citra Lestari KEHATI” category. The award was administered by KEHATI Foundation (Yayasan Keanekaragaman Hayati), an organization established in 1994 in Jakarta, Indonesia to collect and manage resources supporting various programs to conserve Indonesia’s biodiversity and use it fairly and sustainably.

Ibu Rini established Kanawida to produce and market shawls made of natural dyes from wood, fruits, and foliage. At the moment the target market for Kanawida is mature consumers with stable income. After the success of Kanawida, Ibu Rini intends to develop her brand by expanding the market to young people and starting to change the name to Kana Goods, which has a meaningful relationship with beauty, and goods that intend to produce environmentally friendly products including fashion with natural dyes. To develop her knowledge and skills about sustainable fashion, in the year 2013 Ibu Rini attended a workshop from Sweden and began to explore more about slow and ethical fashion. Since the year 2015, the characteristic of Kana Goods colour is indigo blue was inspired by the Japanese shibori because at the time natural blue colour has become a trend among young people.

Kana Goods collaborated with my students for fashion and sustainability course projects. The idea of this project has existed in my mind because during the COVID-19 pandemic the students are slowly losing their connection with industry. Industry also needs the students to develop some fresh ideas for concept and design, especially for sustainable fashion practices. In Indonesia, many communities are not familiar with the importance of sustainability in the fashion and textile industry. Hence the sustainable fashion industry needs to integrate with the generation Z students for raising the awareness targeted to the particularly young generation. This project collaboration is also essential to strengthen and empower Indonesian cultural sustainability, as the young generation needs to preserve the local wisdom of Indonesian textile culture.

My students Evania Rosalind, Faustine Cerelia, and Michelle Birgit studied the background of Kana Goods before they started to discuss and synergize with Ibu Sancaya Rini for creating sustainable fashion products. It was decided the main concept for the collaboration is reducing environmental pollution due to chemical dye waste and production residue by using indigo batik cloth of Kana Goods. The indigo batik cloth will be created into an all-size, unisex outer and the leftover fabric will be made into a face mask and other small fashion accessories therefore the textile waste will have extended value and function. The students also made the slogan “Delete The Waste” where any textile waste from Kana Goods they have planned to become a variation of functional fashion accessories such as earrings, headbands, patchwork handbags, and bucket hats x bag form. This opportunity has made the students the agent of change by raising the awareness for sustainable fashion to generation Z in Indonesia.

Dayman, L. (2019). 5 Things You Should Know About Japanese Shibori Dyeing. 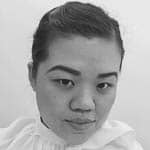 Janet Teowarang is the founder and creative director of her own fashion brand, Allegra Jane. She is also a lecturer at Universitas Ciputra Surabaya. Janet is one of batch two alumni from Australia AwardsIndonesia Short Term Awards of Fashion and Textile sector and Alumni Grant Scheme recipient. She loves the history of fashion, world art and crafts, and is very excited to visit every museum when she travels around the world. Follow @allegrajanetheofficial and visit janetteowarang.com

Perhiasan = Jewellery
The forest on my flesh
Flag Project (2006-2020)
Yangon Alley Garden: A trail of paper flowers between Myanmar and Fremantle
Ryndia silk of the Khasi Hills, Meghalaya
Shaabook silver jewellery in Oman: A secret currency of adornment
The world in a tea towel: Weaving cartographic abstractions
Raci's mangrove apple: A batik message from the coast of Pasuruan to the fashion...