Eastern glazes: The provenance of celadon, tenmoku and shino 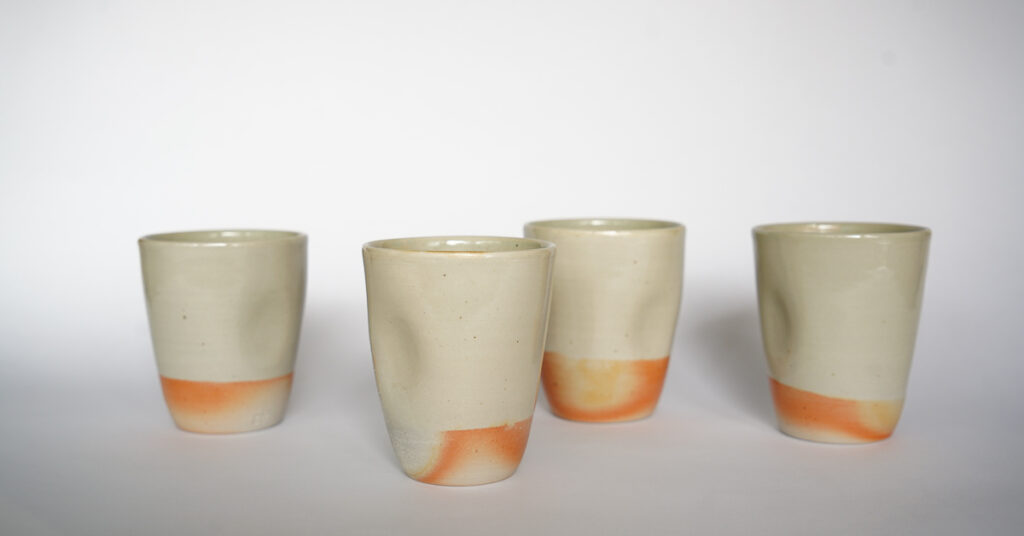 Sandra Bowkett starts to question her right to use Japanese terms.

I retested these and other glazes with less known provenance.

From my current book, the glazes I most frequently use Adriana’s celadon, Lene’s shino adapted from JBD p. 87 (which does not correspond to my copy of the Glazes for Australian Potters by Janet Deboos, Cassell Australia, 1978), and a few others identified by numbers, some with a reference JBD. I have a window ledge with numerous test pieces in disarray, often of the same glazes fired in different locations in the kiln on different clays.

Often when promoting my work and a descriptor on invoices I will use the terms celadon, shino, and tenmoku. I have begun to wonder at the appropriateness of utilising these convenient descriptors. Is this an appropriation to which I am not entitled?

1970s ceramic education was heavily influenced by the Japanese craft revival movement which we came to know through Australian pioneer potters following the Shoji Hamada and Bernard Leach traditions. I knew these glazes had an Eastern history, particularly Japanese, although I was aware much of the Japanese aesthetic and technical traditions came from Korean potters brought to Japan and that Korean ceramics had backstories in China. It was time to do some research.

I started with copies of The Unknown Craftsman, A Japanese Insight into Beauty by Soetsu Yanagi adapted by Bernard Leach, Kodansha International 1972 and Clay and Glazes for the Potter Daniel Rhodes Pitman 1973 and Wikipedia. 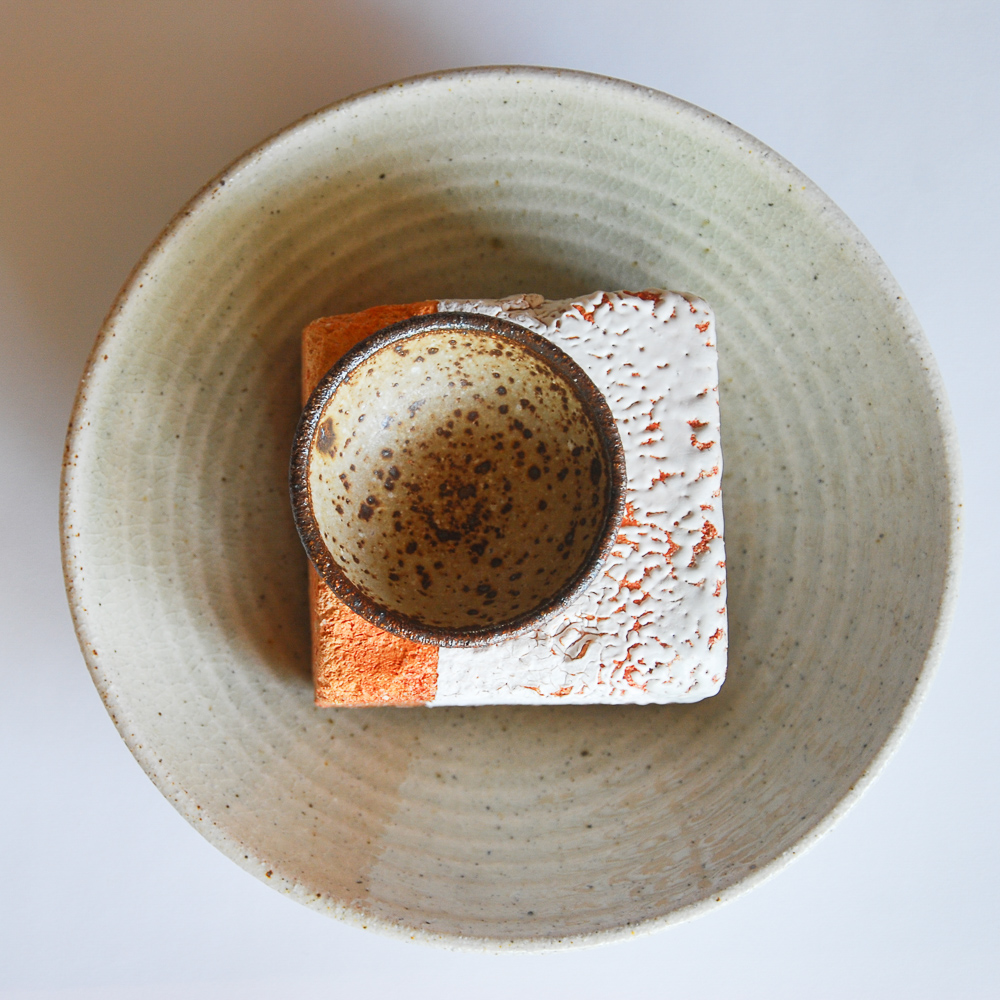 According to Daniel Rhodes “The colour produced by adding a small amount of iron oxide to a glaze in reduction is called celadon….it is probable that the old Chinese celadons were made up of feldspar, limestone ash and some red clay which furnished the iron oxide for the colour.” This is similar to the ingredients I use varying the iron oxide from .5 to 2% to create subtle greens.

I like to use this glaze as it works visually harmoniously with wood-fired clay bodies,  matures over a wide temperature range and gives a tough functional surface.

According to Wikipedia, in China this ware was known as greenware, not to be confused with unfired clay objects. The term celadon was coined by seventeenth-century European connoisseurs of these wares. My favourite theory is that it was named after the shepherd Celadon, a central figure in a pastoral romance written in 1627 who wore pale green ribbons.

Tenmoku is a deep solid black glaze breaking to rich ginger browns where it is thinner, particularly on the edges. According to Daniel Rhodes “The name comes from the Tien-mu -Shan, Mountain of the Eye of Heaven, a mountain in Zhejiang province China. It is from a monastery on this mountain that Dogen, a Japanese Zen priest was said to have brought the first tenmoku bowl to Japan in 1228”. It was originally made of naturally occurring high iron clay slips (liquid clay-like terracotta) that have a low maturing temperature: at stoneware temperatures they become fluid, that is, a glaze. In Japan, it was a favoured look for simple bold tea bowls imitating Chinese Jian ware from around the twelfth century.  Since reading this material I have prepared a slip from Bennet’s terracotta and will test it in my next firing. I now use this glaze sparingly often over the top of more subtle glazes to define rims as its dominating personality can overshadow the form.

Shino is known as a glaze with widely differing characteristics but unified by its satiny white to creamy surface and orange where the glaze breaks and reveals the clay beneath.  It seems to be the only glaze in my trio that was developed in Japan (sixteenth century). Wikipedia suggests the origin of the term “Shino”  may be derived from “Shiro”, the Japanese word for white or it may refer to the tea master Shino Soshin (1444–1523).

In Japan shino also refers to ceramic objects, valued for use in the tea ceremony. It was the first white glaze used in Japanese pottery and has had chequered popularity. In the 1930s and 1940s, modern shino glazes were developed in Japan. In the 1970s, a glaze formula developed independently in the US, which sought to imitate early shino pots and continues to be popular in the US as it is in Australia.

What attracts me to this glaze other than its luscious appearance is that it is functionally durable, technically reliable and matures at lower temperatures to other glazes I use. This is useful where the temperatures vary from the top to the bottom of the kiln

I will be recalibrating  Lene’s shino as one of the ingredients soda feldspar is now unavailable and tin oxide very expensive. Will this become Sandra’s shino?

What have I concluded from this brief research? Will I continue to use these descriptors for my work? Does time erode cultural claims to ownership?

In simple terms, for millennia trade in ceramic objects has traversed the globe. Often material and techniques protected for trade advantage were gradually eroded as investigations on how to copy became more sophisticated. I have found the ceramic community to be a generous family, including sharing glaze formulations in what could be a professional advantage. The movement of information continues, more rapidly so in this digital age.

Through this research, I feel even more connected to the diaspora of potters. My lineage begins in a West that readily assimilated Eastern traditions. In using the terms celadon, tenmoku and shino I acknowledge and disclose my ceramic heritage, I also see it as a way to advance the knowledge of these terms. For now, I will continue to use these descriptors. 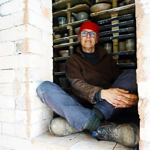 Sandra Bowkett is a potter based in Taungurung country Victoria Australia. She lives on a heavily wooded property, this has been one of the elements that motivated her to recently build and use a wood firing kiln. This in turn has influenced her return to making simple tableware for daily use and thus the return to the classical eastern high firing glazes of her student days. A full cycle. Visit www.sandrabowkett.com