Quarterly essay: Dancing with the anvil 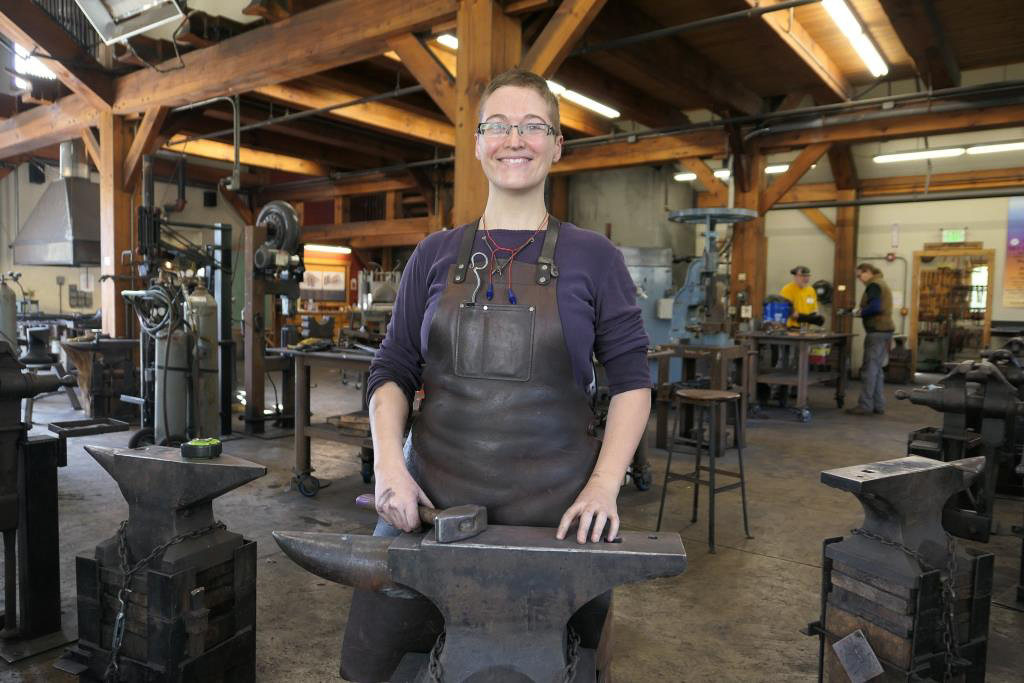 Michael Winkler is impressed by the resilience in the USA, embodied in those who continue to work with iron.

Washington DC’s National Cathedral is the sixth-largest cathedral in the world. It perches on the tallest hill in the north-west section of the city, and its spire is the highest point in the national capital. It is Episcopalian but emphasises ecumenism. In a country where church design tends to be quotidian, the National Cathedral is unflinchingly Gothic. This is where the funerals for four US Presidents have been held, and where five of the past six Presidents prayed on the day of their inauguration. It has become the USA’s most important place of worship.

Descend to crypt level and you enter a vaulted space delineated by huge columns that support the piers in the crossing of the nave above. The Chapel of St. Joseph of Arimathea leads to a columbarium which has niches for urns as well as burial vaults. There are three metal gates, designed and made by blacksmith Nol Putnam. All are remarkable, but one stands out.

The Folger Gate was completed in 1993 and installed at the West Columbarium in 1994. It is almost two-and-a-half metres high, weighs 545 kilograms and took 1200 hours to create. It has a design sufficiently bold to confer consequence when viewed from a distance, and innumerable small embellishments to reward close inspection. It is covered in 204 iron leaves and 42 flowers. Every petal and pistil is different. Each rivet head has been incised with an individual design, to catch light and imagination. The grid of densely clustered flowers resolves upwards into a sparse, graceful arrangement of branches in the lunette. Magnificent.

As a child in rural Australia, I knew about blacksmithing because it appeared sporadically in books, usually as shorthand for virulent manhood. Most of the farms I visited had anvils tucked in dusty workshop corners, and presumably there were farriers who shod horses, but I did not see anyone working hot metal. The only childhood recollection I have of seeing a blacksmith in action was on a family visit to mining theme park Sovereign Hill. I remember the huge bellows, the shocking purple-orange of the embers, and a man in an apron (the forge, along with the barbecue and the Masonic Lodge, being the only acceptable place for an Aussie bloke to wear an apron at that time) turning out miniature horseshoe after miniature horseshoe. My parents bought one for me. It was not much bigger than a matchbox. I think now of that blacksmith, his potential for breadth and expression narrowed to something akin to mass production. Miniature horseshoe after miniature horseshoe. Gawked at by tourists. It was like penning a dolphin in a backyard pool.

My nascent notion that blacksmithing evidenced supreme masculinity would have been bolstered by teenage reading of boxing history. Acclaimed champions such as Jem Mace, Ben Caunt, Eric Boon and Joe Jeanette were blacksmiths. So was sainted Maitland prodigy Les Darcy. Most notably there was Bob Fitzsimmons, “The Fighting Blacksmith’, one of the greatest boxers to ever lace a glove. He carried two stamp punches wherever he travelled, one with his name and the other with a star. He was said to seek out local blacksmith shops when away from home and work at the anvil as a unique form of ring training. The blacksmith-boxing link was also used by Dickens in Great Expectations, where Pip longed to emulate his brother-in-law Joe Gargery, a blacksmith and pugilist. This reinforced my supposition that blacksmithing was hypermasculine, primarily European, and archaic.

My great-great-great-great grandfather was a blacksmith in Silesia. His great-great-great-great grandson was born in Australia with no manual dexterity and a surfeit of uncertainties. For dress-up day in my first year of school, I costumed myself as a schoolgirl, with unhappy results. For dress-up day in my second year of school, I wore Ned Kelly’s armour made from cardboard and silver paint and felt safe and secure. Ned became the most important folk icon of my childhood, almost a talisman. I read and reread the story of Kelly and his gang stealing plough mouldboards and shaping them into armour in a bush forge in 1879, using a green log as a makeshift anvil. This was blacksmithing at the heroic level. (An alternative theory claimed that compliant local blacksmiths made the armour in their own forges, but testing in 2003 by the Australian Nuclear Science & Technology Organisation confirmed that the metal had only been heated to bush forge levels, about 700°C, rather than 1000°C-plus in a professional forge. This testing, at the Lucas Heights nuclear reactor, illustrated how minimally forged metal changes over time; the secrets of the armour’s creation were imprisoned within the object, as if holding time in suspension.)

Small wonder that I associated blacksmithing with male physical prowess, conflating it with the blunt and limited images of manhood that were preeminent in my small country town. The idea that a blacksmith could be sensitive, female or create work beyond the crudely functional was outside my sphere of understanding. Counter examples could be found then, and especially now, across Australia. I discovered two exemplars while wandering on the far side of the Pacific.

Read more of Michael Winkler’s journey through the USA and how he discovered a way of stopping time jumping off the consumer juggernaut.  This is available to subscribers.