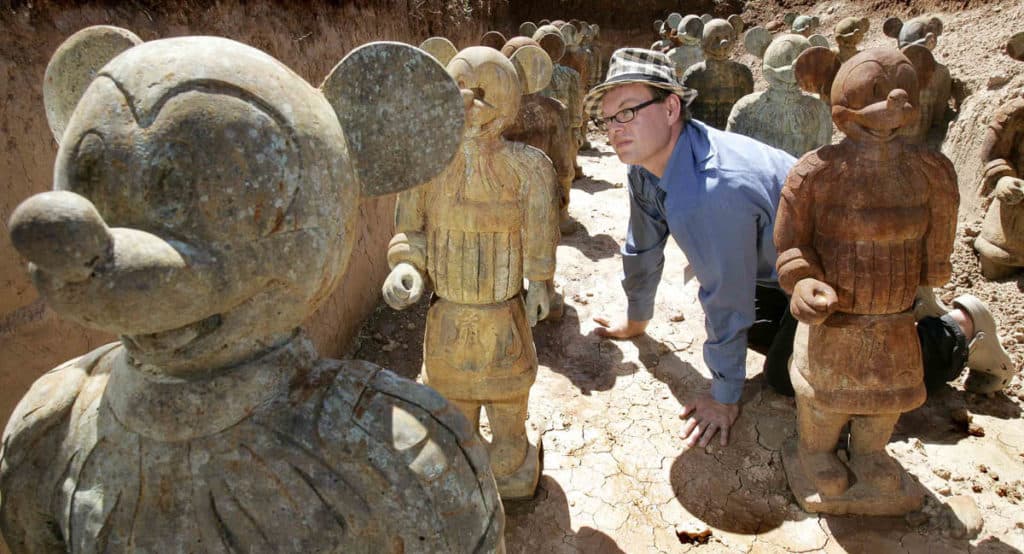 For fifteen years, Dale Cox has been making artwork in response to a remarkable archeological discovery. A farmer’s paddock in Castlemaine was found to contain a series of entombed figures dating back to the Qin dynasty. These had clear similarities to the famous entombed warriors found in Xi’an, except that their heads resembled the big-eared figure of Mickey Mouse, an antecedent of modern Western popular screen culture. Cox’s artwork consists of displays featuring these figures and a documentary, which reflects the local and global conflicts generated around this find. Garland digs a little deeper… 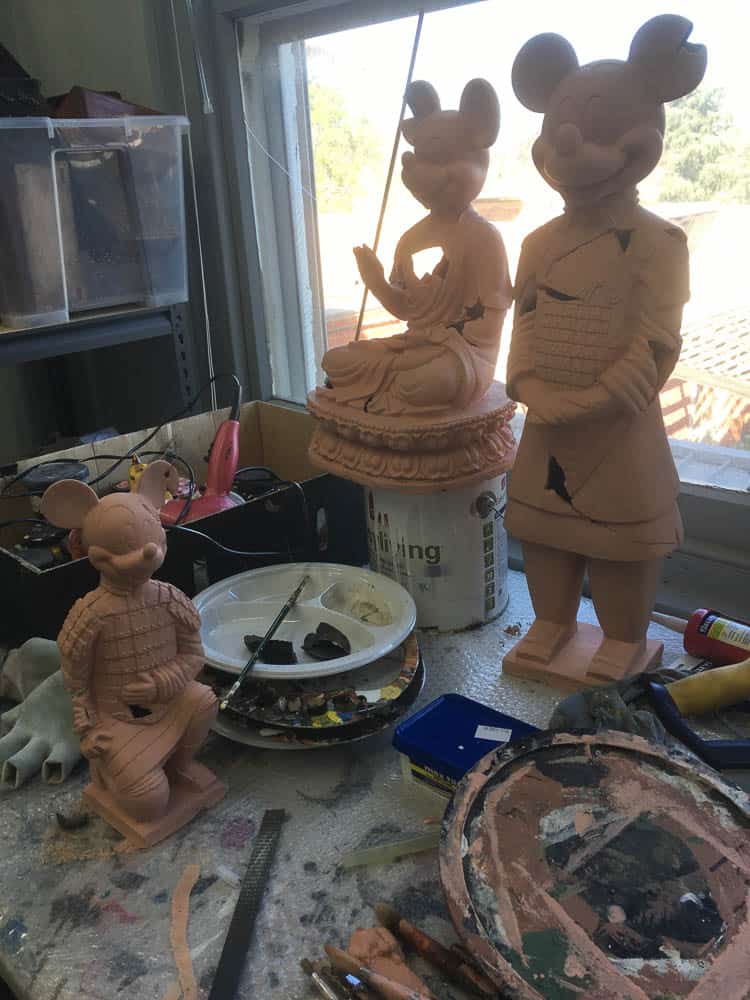 ✿ How were these works made?

The very largest sculptures seen in the film involved latex mould making and concrete as a medium as these are made for permanent outdoor display. Cast in several pieces they are then joined and treated with a ferruginous paint, an emulsion embedded with iron and occasionally copper filings then treated with an oxidizing agent.

All the smaller pieces are in fact made from found objects, chiefly pottery or hard resin statuary such is found cheaply in garden centres or “variety stores”. The Warrior or Buddha bodies are married to the (usually plastic or vinyl) heads of Mickey Mouse dolls and toys, again sourced from retail outlets or second hand at markets opportunity shops etc.

The seamless and apparently convincing marriage of the two found objects occurs in the deliberate breaking of the pieces and the subsequent restoration process and of course the surface treatment and patina which involves combinations of ferruginous paint, acrylic paints and other mediums, as well as sand, concrete, plaster and other admixes I have enjoyed perfecting down the years to give a convincing sense of antiquity. In fact, in all the years I’ve been making these I don’t believe a single person has figured out how they were made. 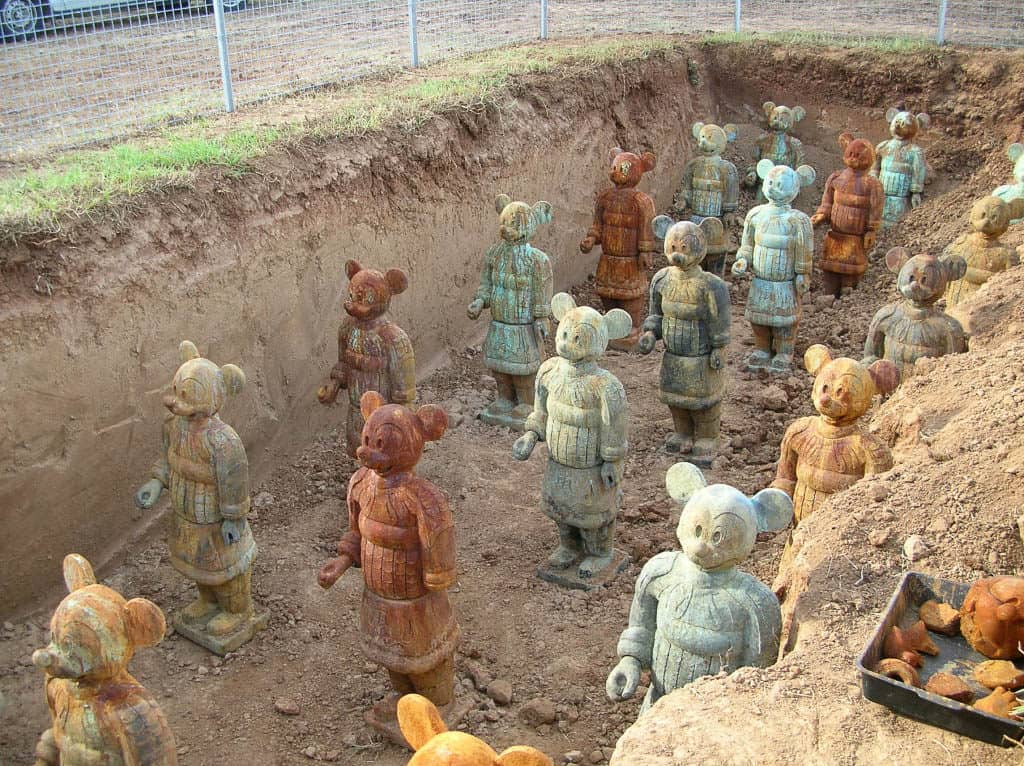 The fact that the sculptures themselves are hybridised and repurposed from Eastern and Western cultural signifiers (themselves copies or mass produced units for worldwide capitalist consumption) is, of course, the beautiful conceit of the objects as Frankenstein’s Monsters of cultural ambiguity in the age of globalisation. Many of the objects I source to make the Warrior or Buddha heads, for example, are clearly Chinese made “knock-offs” of Mickey Mouse, not “official” licensed Disney merchandise, whereby the ideas of cross-cultural homogenization and appropriation are further emphasised.

I therefore consider the use of these sourced materials and my making process as an integral part of the project.

✿ What about Castlemaine do you think makes it an appropriate location for this story?

Aside from practical implications of having moved to the region I do see Castlemaine as a unique place, a crucible of multiculturalism in Australia. As you know the gold rush saw peoples from virtually every corner of the globe arrive in numbers.

Therefore the region carries a legacy of fortune seeking, excavation, discovery, International arrivals, (the Chinese in particular!) and continues to be a place of reinvention and reinterpretation.

The local Indigenous Dja Dja Wurrung refer to the area as “upside down country” due to the fact that virtually every square foot of this area was disturbed during the 1850-70s and the legacy of fortune seeking, buried treasure and discovery does permeate the place. 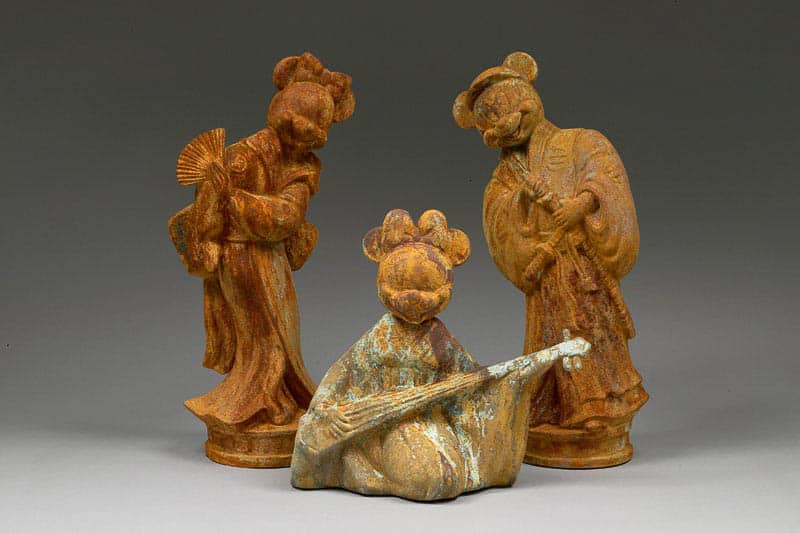 ✿ Do you think that settlers have a longing for remnants an ancient empire that offer a noble history?

When colonial-era artists arrived here, they struggled to comprehend the antipodean landscape and fell back onto European styles of representation. There were no romantic ruins to paint, however, which no doubt fed the convenient fallacy of terra nullius?

Colonial Australia once had a Eurocentric focus that clung with nostalgia to the idea of Empire which is simply irrelevant to a contemporary Australian narrative.

I feel we are a nation still adrift in many ways in terms of confronting our colonial-era history, and being such a diverse multicultural place today with so much borrowed and adopted culture from elsewhere, we are also struggling to define ourselves in any collective sense as uniquely Australian. The past, like the future, is up for grabs. 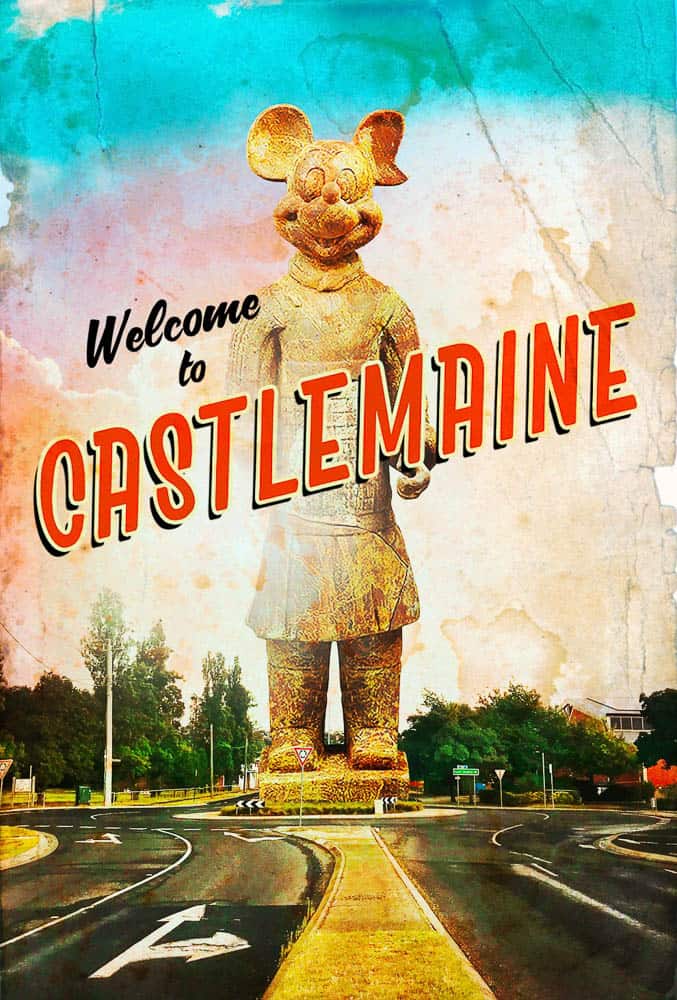 ✿ Are you planning to follow up this story with future works?

This project began in 2005 when I first started making the sculptures. They have been exhibited in commercial and public galleries, finalists in and winners of art prizes and have joined private and public collections. I’ve given numerous talks and presentations to School and University students etc.. Its been unfolding progressively as a project over time and given the success of the documentary I have every intention of exploring the next permutations. 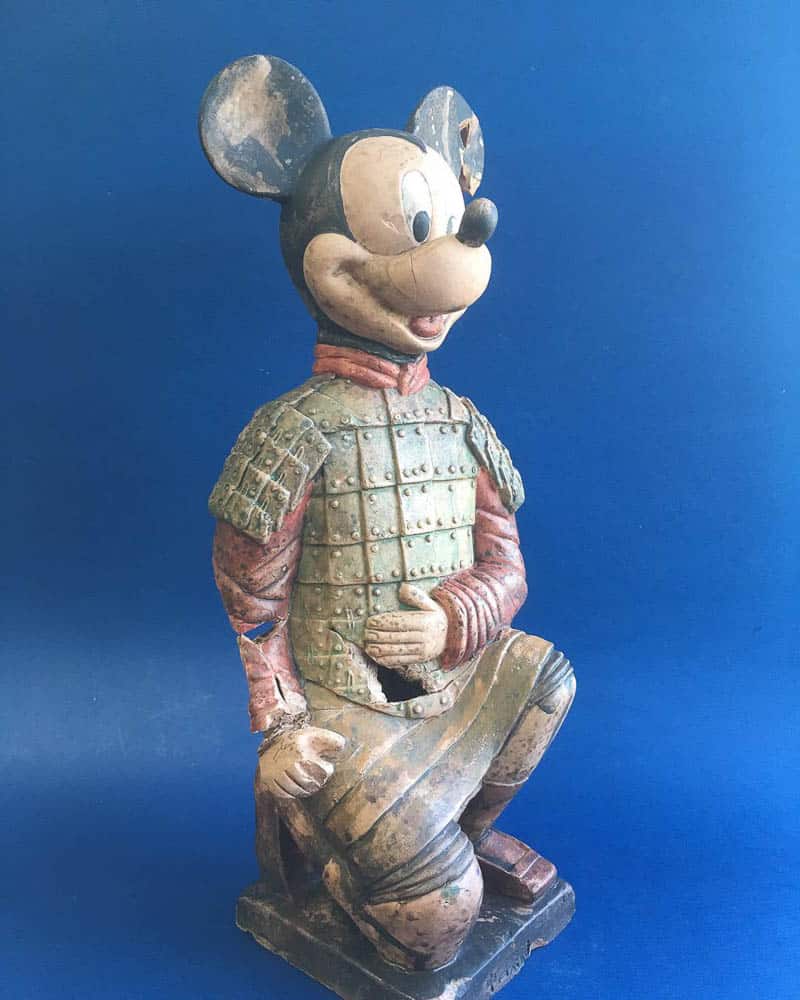 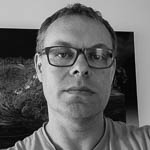 For more information about Dale Cox, see his website www.dalecox.com.au

Very peaceful for the ancestors: Chinese memories in the Lambing Flats Folk Muse...
A considered and cordial welcome: Michael Parekowhai's Ten Guitars and The Light...
Everything Happens to Everyone: A Rodney Glick story 🎧
Talk of the town: How do you balance love and money?
Interpreting China through an art jewellery practice
Learning from Nagaland
A Shanghai lei over: the plastic jewellery of Lauren Simeoni
Preliminary notes on relationships between Chinese Ge Ba textiles and the walls ...