The beadworks of the Embera Chami tribe of Colombia 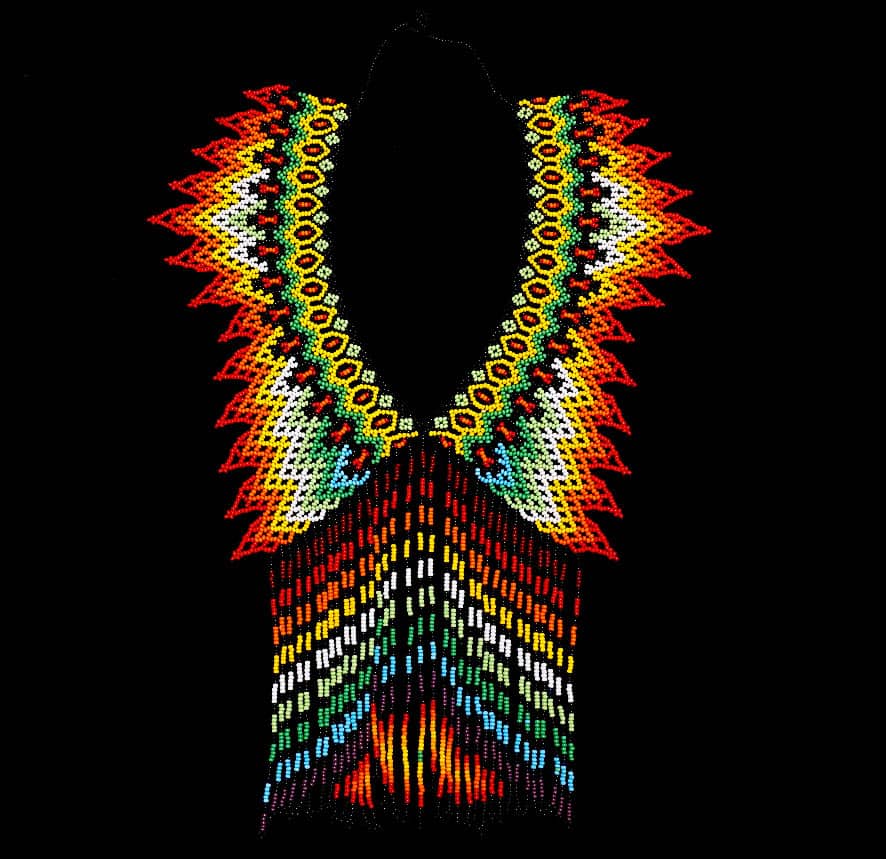 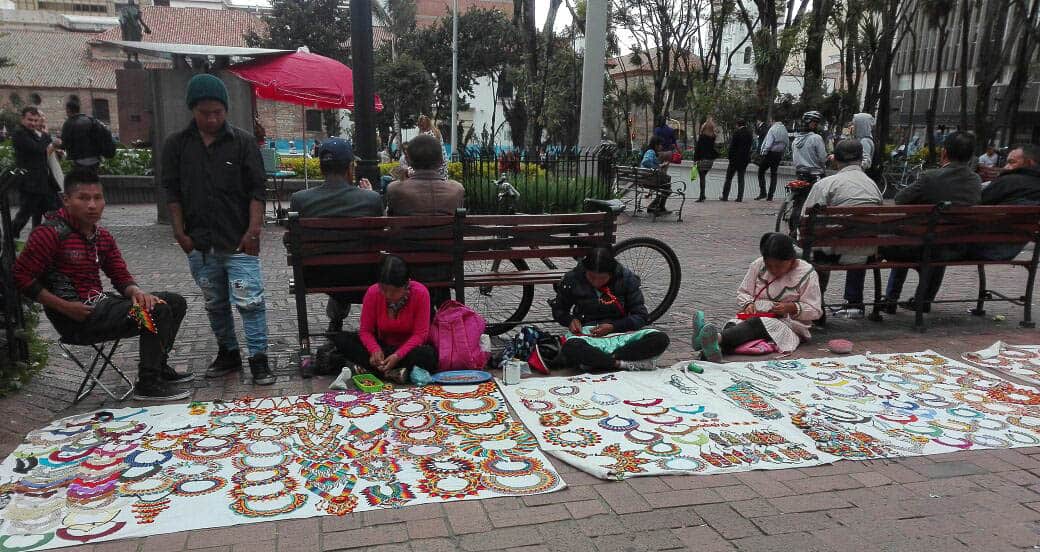 I was born and raised in Colombia in a war torn country surrounded by extreme poverty and pervasive corruption. I arrived in Australia when I was 15. Having received all the life lessons that a place like Colombia can give you, Sydney was the missing piece in my puzzle, as it heavily influenced me with the strong discourse of indigenous and environmental rights at university and living in the Aboriginal suburb of Redfern. As a part-time visual artist and full-time community worker, I struggled for years to unite my two passions: art and promoting social change.

It was this year during a visit to my homeland that the doors to my path finally became clear. Outside the iconic Gold Museum, while taking a casual stroll in the streets of Bogota, I had the pleasure of meeting a group of jewellery beaders from the Embera Chami tribe. I was taken away by the radiant colours and their elaborate beading techniques – I knew I couldn’t walk away from them. At that same moment, I had the mystical epiphany that it was now my life mission to be their advocate and share their unique form of beading with the world.

The Embera are Colombia’s third largest indigenous group with an estimated population of around 71,000. Embera means “people” and chami means “mountains” in their traditional language. They extend across the coastal Pacific basin of the department of Chocó. They are one of the few indigenous communities in the country that continue to practice their unique dialect, cultural expressions and ancestral spirituality. 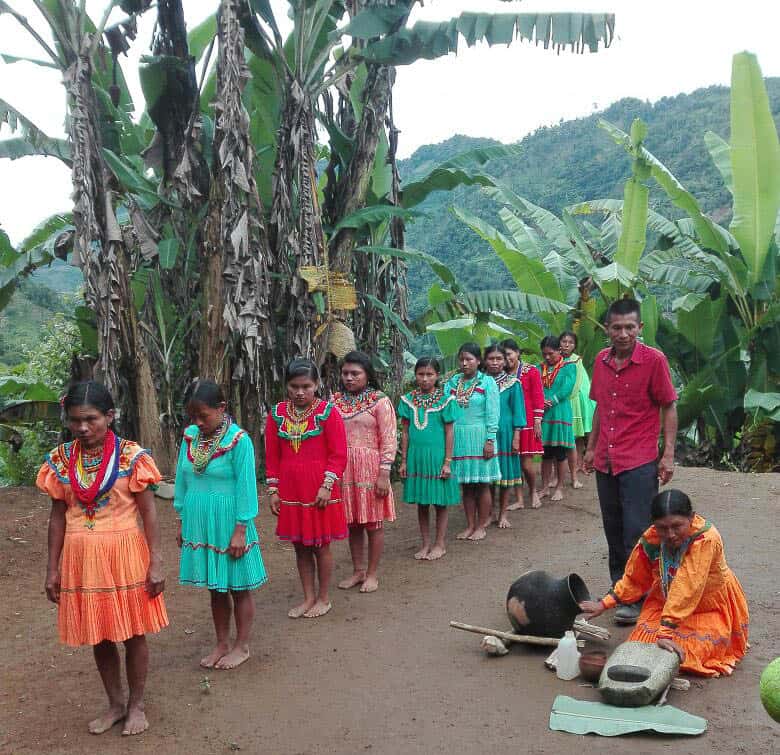 The Embera are an astonishingly resilient people, and their survival is a matter of international concern. The tribe faces threats of physical and cultural extinction, as declared by the Constitutional Court of Colombia in 2009. They have been detrimentally affected by the armed conflict, extractive policies and extreme poverty. Violent armed groups have targeted community leaders, leaving their people in a highly fragile state. Many Embera communities today lack access to very basic resources such as clean water and vaccinations against preventable diseases.

Handcrafts are one of the main resources of survival for the Embera who are known for their unique beading skills and knowledge, passed from generations to generations. The Embera paint a picture with miniature glass-beads that reflect their ancestral dreamings strongly connected to the earth, their mother. Their beadworks contain unique symbolisms that talk about their natural environment, social codes and spiritual connections. Okamas for the women and otapas for the men, these traditional pieces provide protection and tell the stories of the ones wearing them. The pieces are traditionally handcrafted by the women, they are needle-woven and hand-threaded; a wood loom is used for rectangular pieces from small bracelets to large chestlaces.

Embera handcrafts have gained wide public attention in the recent decades. A considerable effort to support local artisans in the country has seen a wave of love for their products. Recent local government initiatives through partnerships with artisan associations such as Artesanias De Colombia have done a strong effort in promoting unique crafts in Colombia and worldwide. Crafts of the Wayuu and Kogi tribes have reached worldwide attention for their originality and intricacy. Finally we are seeing a shift in appreciation for local talent and preservation of cultural patrimony; however, we still have a long way to go. Western influences such as that of the USA continue to dominate the market in Colombia.

Since I started working with the family of Embera Artisans I met earlier this year, a beautiful relationship has been developing over time. They have shared their unique culture with me and have made me aware of the harsh realities they face on a daily basis. I can confidently say working with the Embera has changed me and has even redefined my own identity as a “Colombian” woman. I purchase the collections of beaded jewellery from the Siagama family, I am in constant communication with them and place orders as I need them. My family ships it over to Australia. It is always such an intriguing surprise before receiving the parcels, every time they surprise me with the most stunning designs. I only order by numbers at a mutually established cost demanded by the artists. 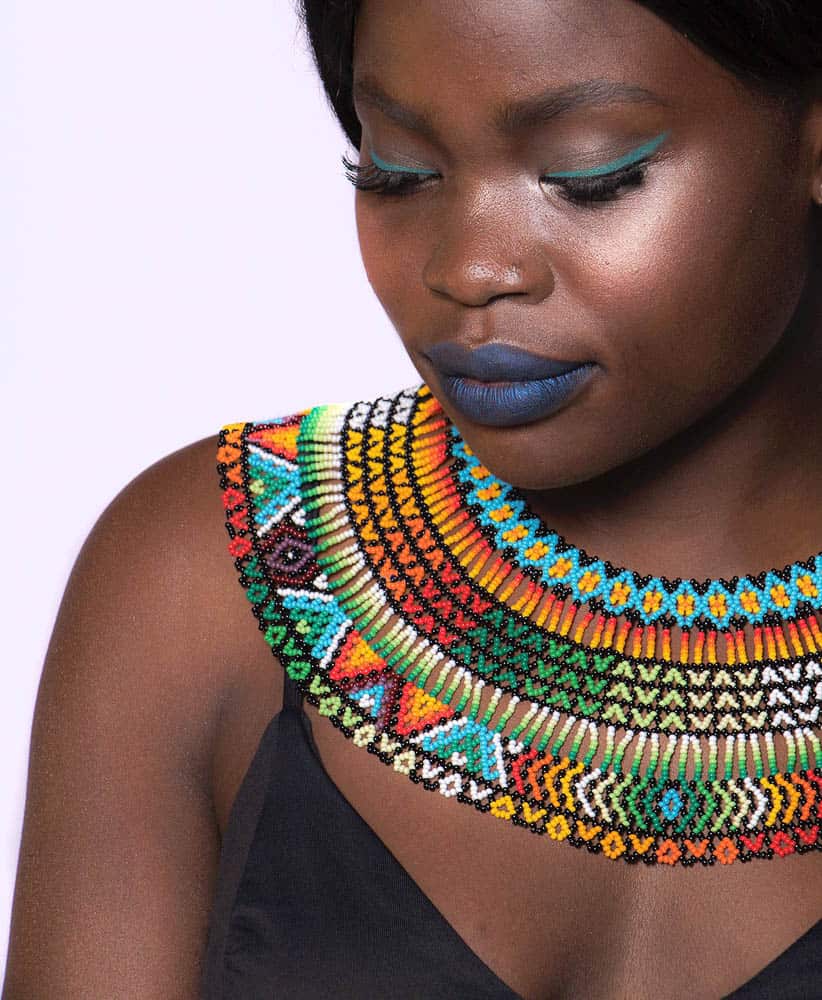 Items are showcased through the brand Mami Watta Collections, run by me and my partner. We style the necklaces with a minimalist style of clothing to highlight the technique and colour of the pieces. In our last photoshoot, we went for an urban/minimalist fashion style, with the help of our amazing photographer/styler Elise Vaughan and styler Evelyn Agripa. Through our Instagram page, I also love showing how the collections fit and compliment anyone wearing them, no matter the age, skin colour or style. Images often go with a little story about the person wearing them, as every person has an inspiring story about them that deserves exposure.

I would say the very core aim of Mami Watta Collections is to celebrate traditional forms of handmade jewellery and cherish the empowerment of women/men in the arts all over the world. I am often at local Sydney markets and events focused on sustainability, Indigenous and women empowerment. Follow our whereabouts on Instagram through @mamiwattacollections.

Indigenous people have unique worldviews and ways to connect with nature that have existed for thousands of centuries. They have consciously preserved their unique forms of art making which are a clear channel of expression where we can witness their infinite imagination and their care for Mother Earth. Art practices such as the handmade beadworks of the Embera people deserve our attention and support. 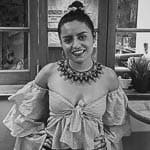 Ana Maria Parada lives in Sydney and currently works as a Community Advocate in the Disabilities sector as well as running her own jewellery business. She is also a visual artist; through which she explores her identity and her views on migration and politics. A trained political scientist graduated from Sydney Uni in 2013, Ana Maria has led research projects and initiatives supporting Indigenous social movements in Latin America and Australia. She is also a dedicated supporter of the art practice of Capoeira Angola as an innovative therapy to support disadvantaged individuals and groups.

What we practise in private
What in flame-ation!
Embodied history: Remaking and returning the midi to the Tolai 🎧
How I learned coppersmithing in Gaziantep
Creating sanctuary through beading: The South Sudanese Elders group
Hellenic connections
Yirran Miigaydhu Aboriginal Women Weavers
The Shadow Theatre of Anaphoria Island