The Dirge and the Vital Heat 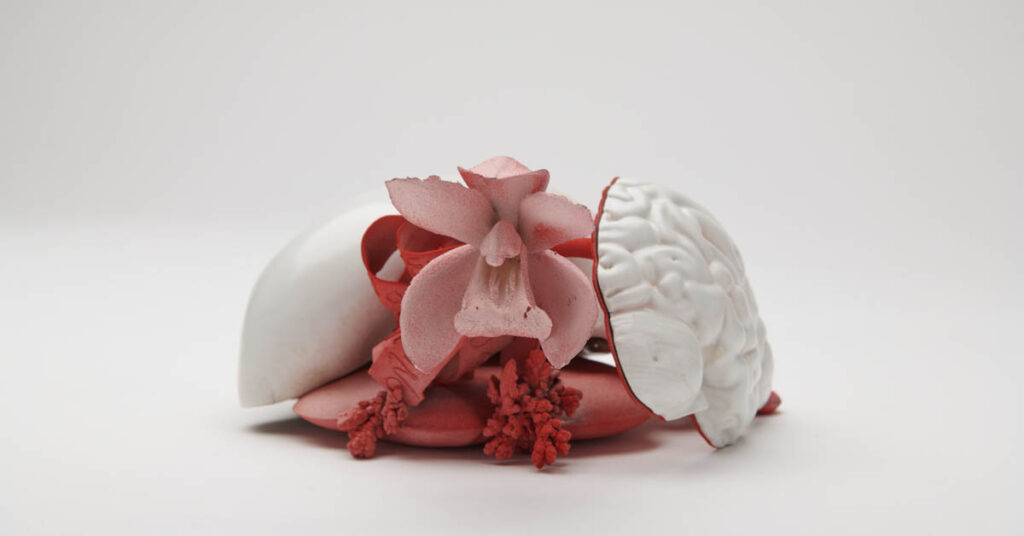 Nicole Polentas writes about a series of art objects that draw on Aristotle’s theory of Vital Heat to reflect on life and death.

(A message to the reader in Greek.)

Life and death are collective experiences, both are an inevitable part of our lives. Death follows life, and without life, there is no death. The Ancient Greeks believed that death was not an end, but rather a journey to new a world. For the Minoan culture, death was the necessary juncture for renewal.

Many Ancient Greek philosophers presented an intersection between philosophy and medicine, life and death through the theory of the Vital Heat. This heat was produced in the heart and was sustained by the pneuma (referring to our breath, soul, spirit, or our creative force), and was transmitted throughout the body via the blood vessels, using blood to transmit heat. Once this heat left your body, so did life. Aristotle stated, “Sleep is a temporary overpowering of the inner heat by other factors in the body, death its final extinction.”

Over the last two years, many of us began to contemplate the notion of death in relation to the Covid-19 pandemic. What did the current climate reveal about our own mortality? For me, the idea of death had already become cemented in my consciousness. Throughout the last few years, both life and death would permeate my lived experience. At the end of my PhD in 2015, my father suddenly experienced cardiac arrest in my presence. He was clinically deceased for 30 minutes.

In 2016, I returned to my family’s village in Crete where I began to research Cretan folklore and the funerary rituals of Classical Greece. In Ancient Greek culture, women played an essential role in rituals pertaining to both life and death. The use and practice of lamentations were solely performed by women as a rare opportunity to express themselves within a gendered space. By contrast, traditional Cretan folksongs known as Rizitika, were predominately performed by men. They freely address themes of mourning and the celebration of life amongst an array of collective experiences. A well-known Cretan Rizitiko presents the crossing in the threshold between life and death through allegory and abstraction, stating “the sky resonates, the earth moves and all the world trembles”.

2016 would continue to be a year filled with both life and death for me. As I prepared to depart Athens, my grandfather suddenly died of a brain aneurysm. He was pronounced clinically deceased even though his heart was still pumping. I recalled the coldness of my father, as he lay on the road in Brunswick, void of any warmth. Later that year I fell pregnant with my first child. Still grappling with grief, I was filled with hope until months later the words, “there is no heartbeat” reverberated like the beat of drums.

Subsequently, I experienced another pregnancy loss. The trauma and grief of those two years led me to take a brief hiatus in making, during which I found out I had been diagnosed with a genetic blood mutation. The first works created were a direct response to my grief and accumulated in a show at Red Gallery, titled Reflector/Receptor: Narratives of Experience. I began to use my practice to explore the cathartic mourning and lamentation rituals performed by Greek women. Reflection became the impetus for complex reconstruction, highlighted through an array of multi-platform works. The jewellery became the intermediary, the reflector and the receptor. It was a dialogue that was grounded in personal experience.

Through a video call with renowned filmmaker and artist David Lynch, we discussed the ways one can navigate grief through the creative process. I was interested in how the crafted object could open a meaningful discussion on life, death and dying through a transformation of lived experience into narrative forms. The art of mourning has a long history, with the creation of mourning jewellery dating as far back as the sixteenth century. I was conscious of not creating works that followed a particular trend when it came to talking about death. 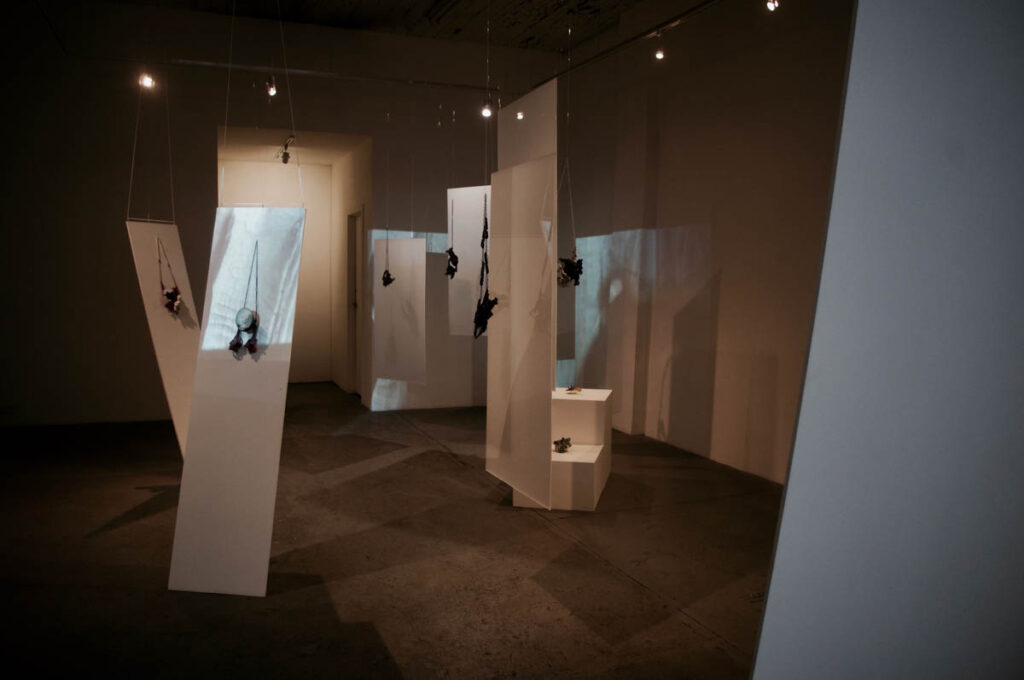 In 2019 I gave birth to my first living child. The relationship between life and death within my practice had become one of increasing urgency. The pre-Socratic philosopher Heraclitus of Ephesus coined the term Panta Rhei πάντα ῥεῖ καὶ οὐδὲν μένει (everything flows and nothing stays). The phrase recognized the essential, underlying essence of life as change. Nothing in life is permanent, nor can it be, because the very nature of existence is change. Change is not just a part of life in Heraclitus’ view, it is life itself. All things, he claimed, are brought into and pass out of existence.

My research over the last two years recontextualised and subverted the theory of the Vital Heat within the conjecture of cultural values. It became the genesis for this new body of work, presented in a second solo exhibition at Red Gallery in August 2022. The Dirge and The Vital Heat is a series of jewellery and objects that negotiate the psychological parameters of life, death, and transformation, contemplating the ways in which life and death can enter into a counterpoint. Drawing from a combination of Greek literature, collective stories and the visuality of anatomy, the objects attempt to elucidate one’s experience of both life and death. Through examining texts on the physiology of the vital heat, microscopic cells are magnified and re-imagined as a metaphorical locus, a site and activation of mental exchange. Here, life and death become an inextricably associated state of being.

I was particularly drawn to Aristotle’s theory of Vital Heat. Aristotle established how the faculties of the soul are transmitted from parent to offspring, establishing the connection between the Vital Heat and the pneuma in relation to conception. The theory posits that the development of an embryo was produced from the heat of semen and transmitted from the pneuma/psyche of the parent. 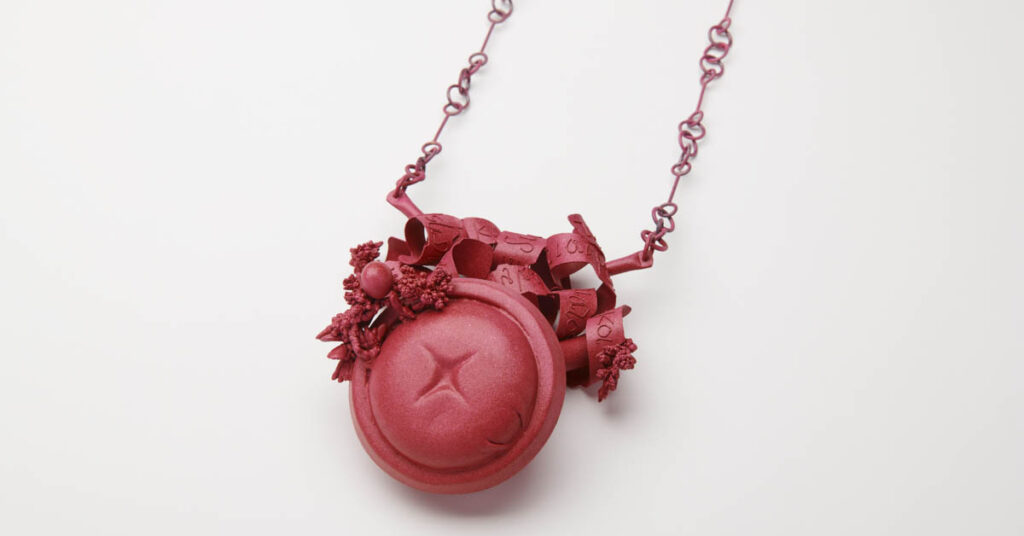 Jewellery constructs were created that were informed by studying medical diagrams of reproductive cells, blood platelets and cells, arteries and organs. I explored details of anatomy into repetitive motifs to create new abstracted forms. A cervix is juxtaposed with magnified cells and tissues, exploring the possibilities for making new objects and jewellery pieces. Fragments of text coalesce through the pieces, each text abstracted from either Greek literature, poetry or a combination of collective stories. 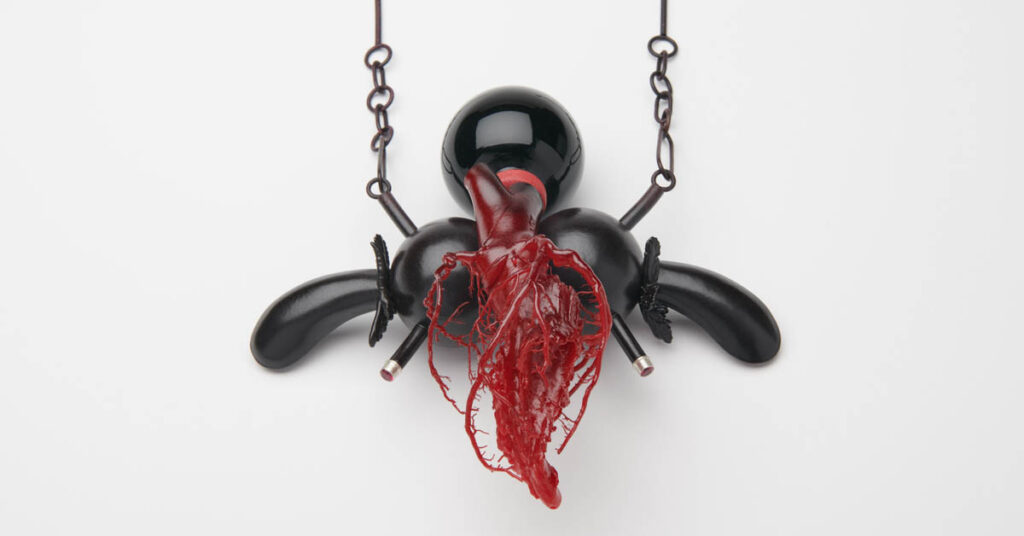 The funerary urn was re-imagined through the construction of two works. The first work titled The Dirge presents a collection of personal stories of grief shared with me by five participants, positioned as an exchange of collective grief. The words embedded into the urn remain forever unspoken. Whilst the object Non-Existent positions that “death implies nonexistence” as a direct response to the paradox of life and existence. 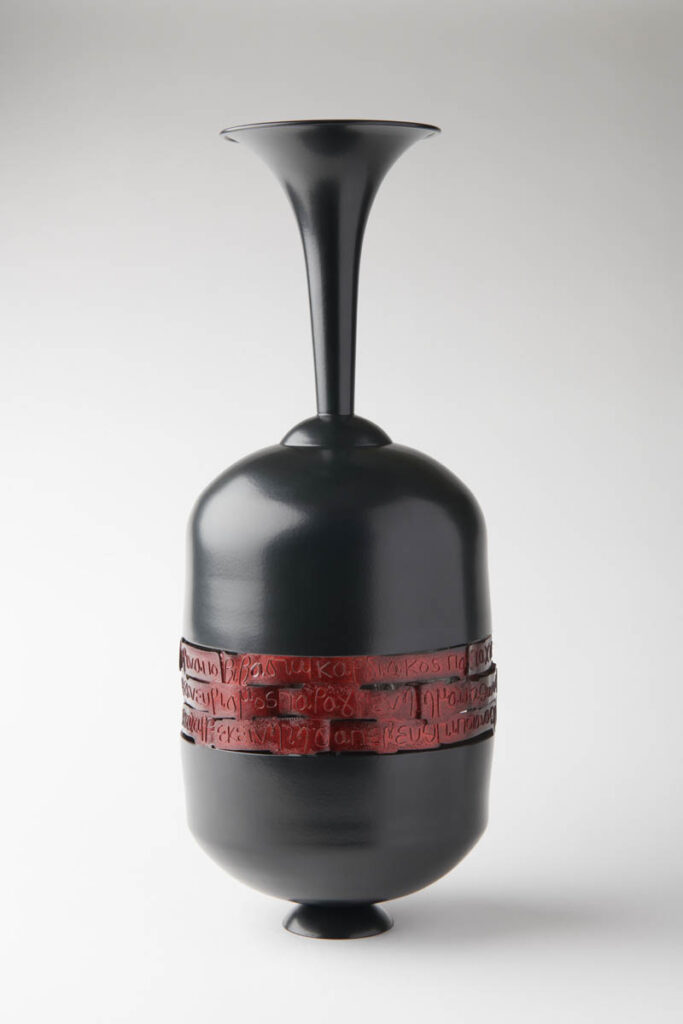 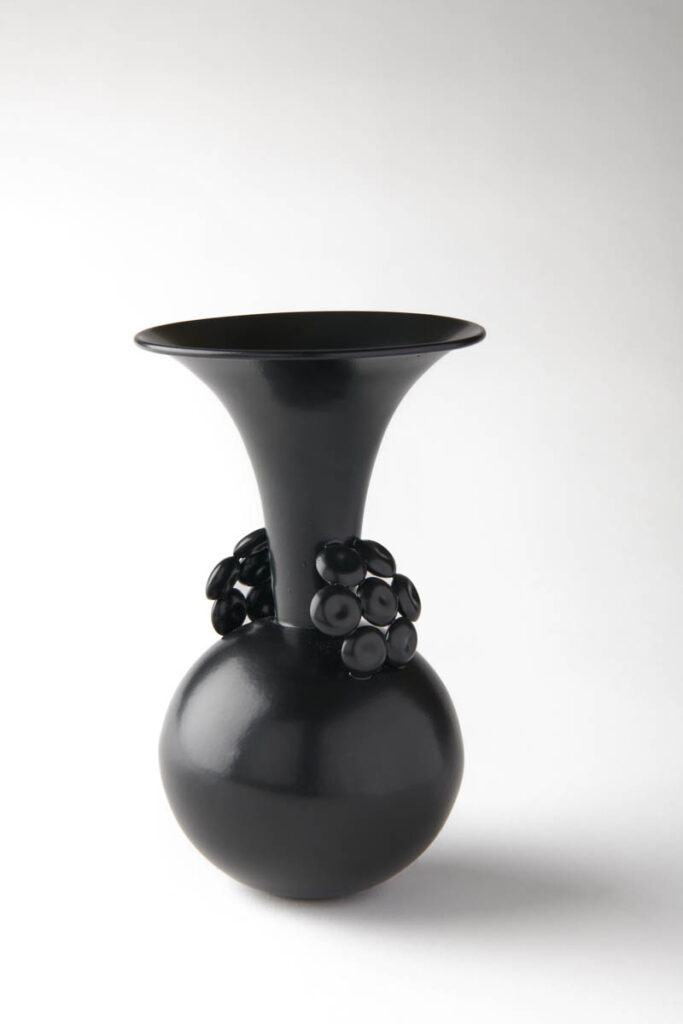 Other objects explore the writings of heat, sexual reproductive organs and the assumptions of child loss within Greek culture through symbolic iconography. The exhibition installation formed a visual poïesis that was deliberated through fragmentation and abstraction, which emerges from the nuance of experiential reflection.

The semblance of sound and projected imagery is performed across a spiritual realm, wherein the theory of the Vital Heat interjects into the object, re-animating and charging each object. The Dirge and The Vital Heat embody the ways in which jewellery and objects can be expressed and received, disclosing ways in which we experience both life and death. 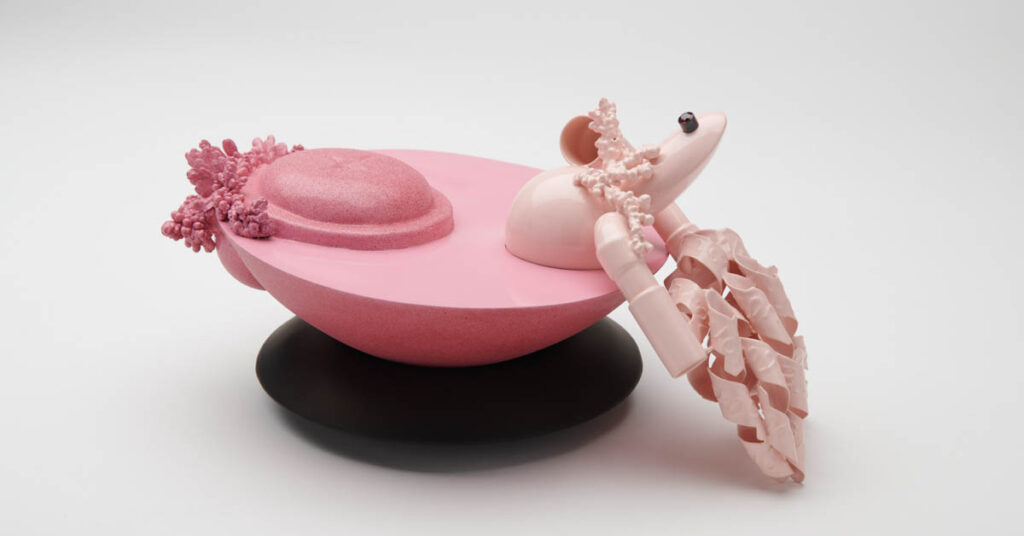 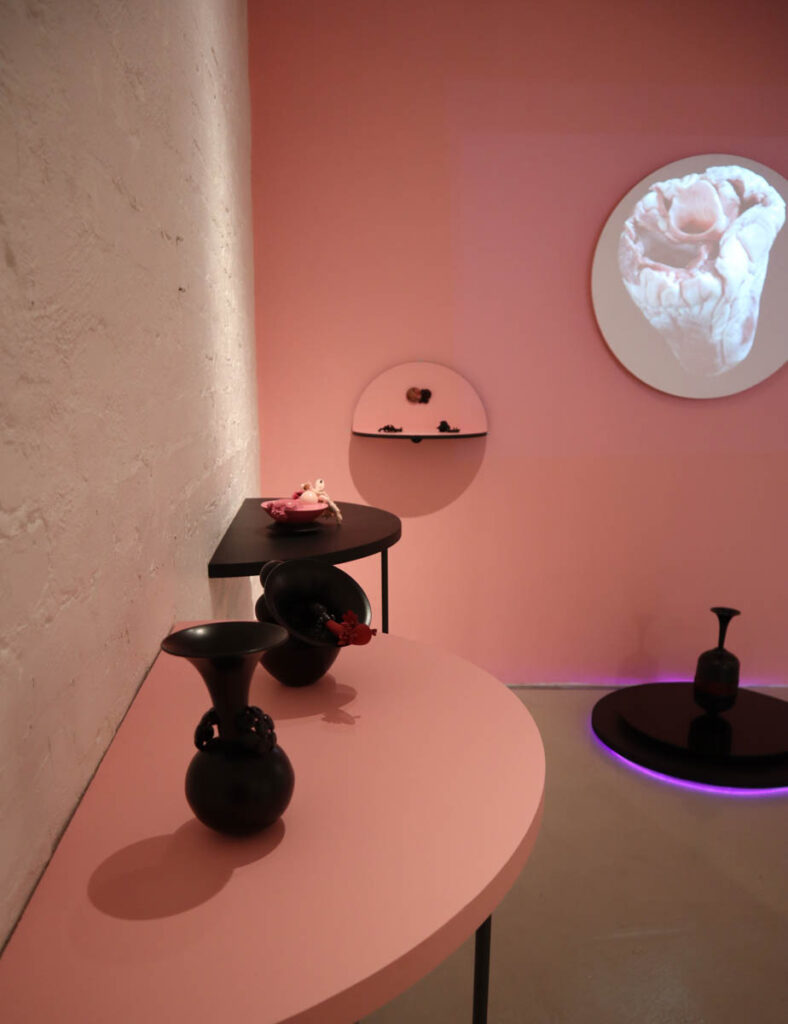 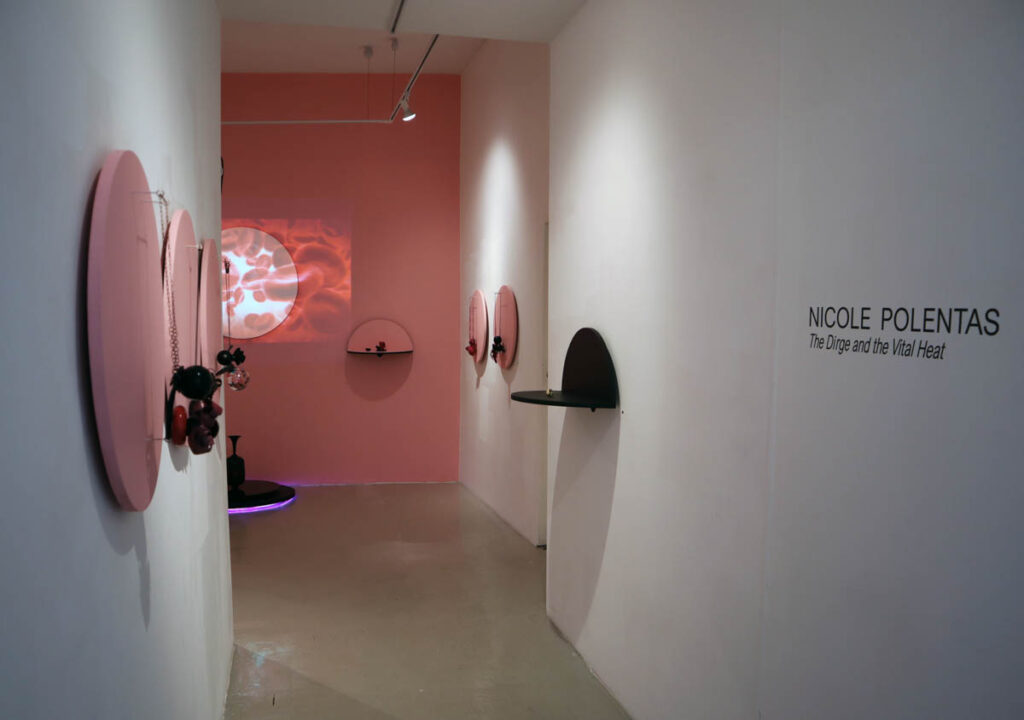 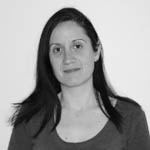