Crafting a ceramic habitat for a handfish 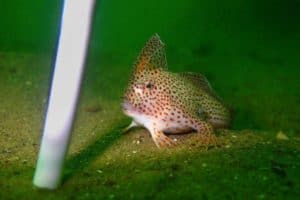 “Not far from Hobart’s Salamanca Market, with its vendors hawking the usual arts and crafts, ceramicist Jane Bamford is creating something extraordinary.

“Bamford has just commenced her three-month Art/Science residency at the University of Tasmania’s School of Creative Arts. The white walls of her orderly studio at the Hunter Street campus are decorated with maps of the nearby Derwent River, as well as newspaper articles profiling the spotted handfish and its underwater realm. Bamford, who grew up south of Hobart in Kingston and spent much of her youth exploring Tasmania’s east coast, is working with scientists from CSIRO to painstakingly handcraft a key piece of habitat for this threatened species.

“The spotted handfish (Brachionichthys hirsutus) was one of the first fish documented in Australian waters, appearing in William Buelow Gould’s Sketchbook of Fishes in 1832. Rather than swim, the fist-sized creature “walks” on modified pectoral fins; its bulky body, forward-jutting dorsal fin and perpetually downturned mouth give it the slightly comical air of a miniature aquatic bouncer. It was relatively abundant in the Derwent River system until the 1980s, when numbers plummeted after the arrival of the Northern Pacific seastar. This invasive species made its way to Tasmania in ballast water from visiting ships.”

Read more at: Crafting a ceramic habitat for a handfish | The Monthly