Brave effigies employed in Laos in the fight against Covid-19 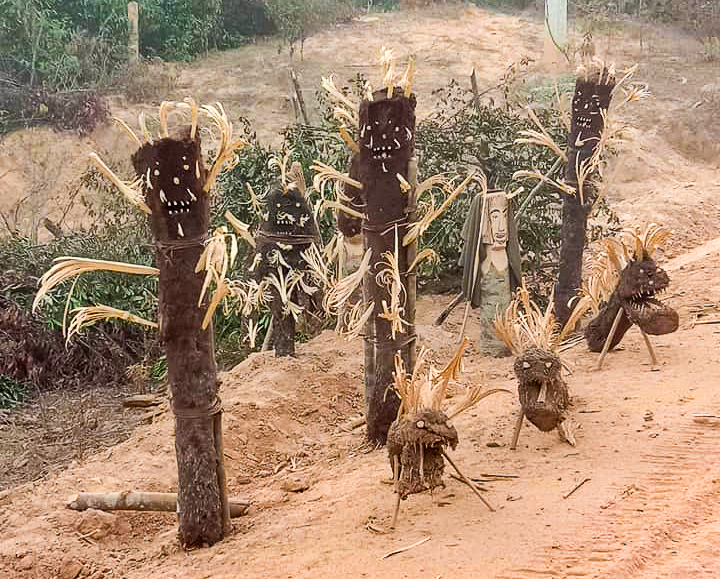 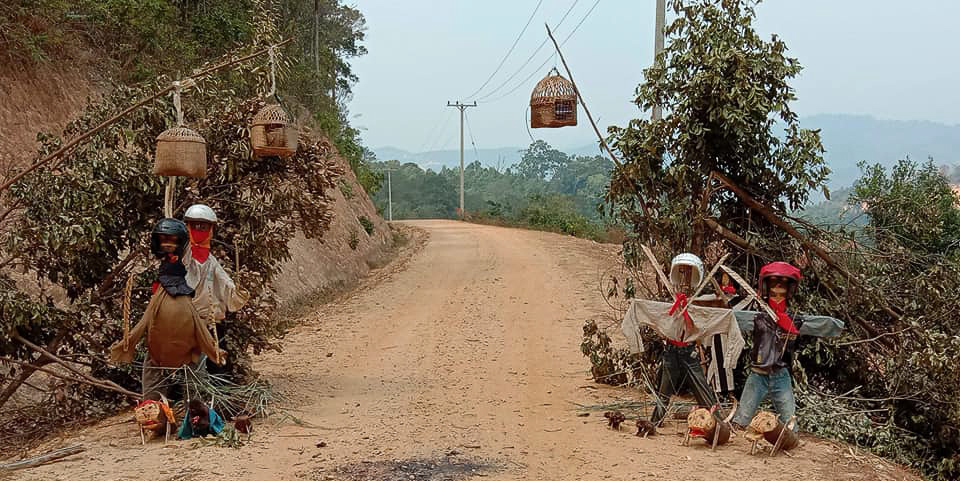 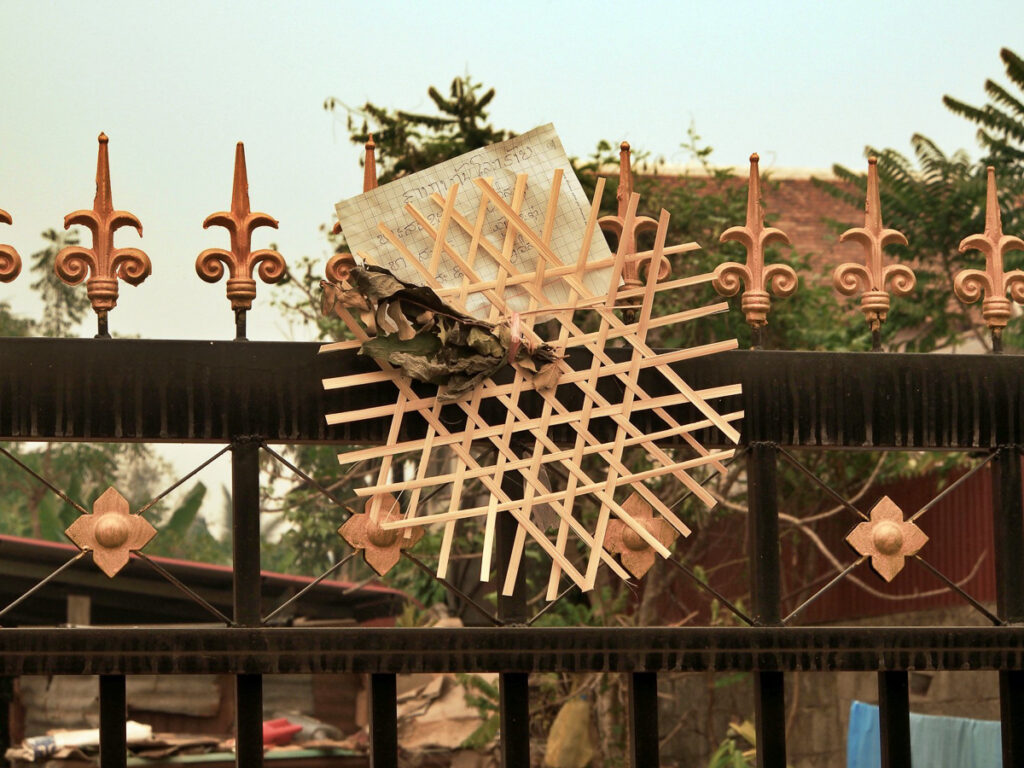 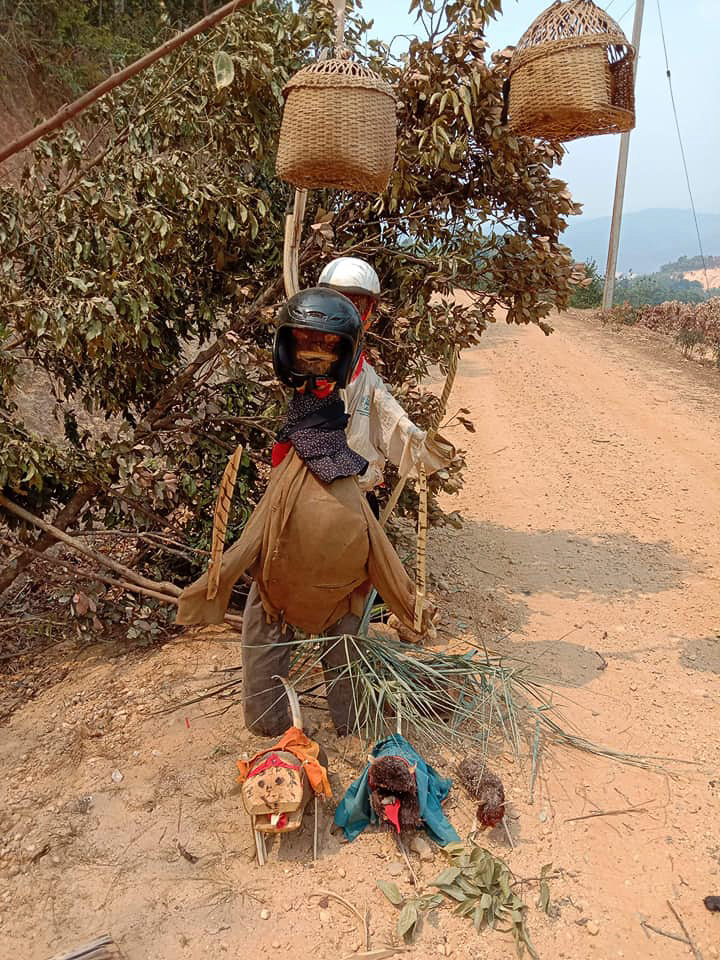 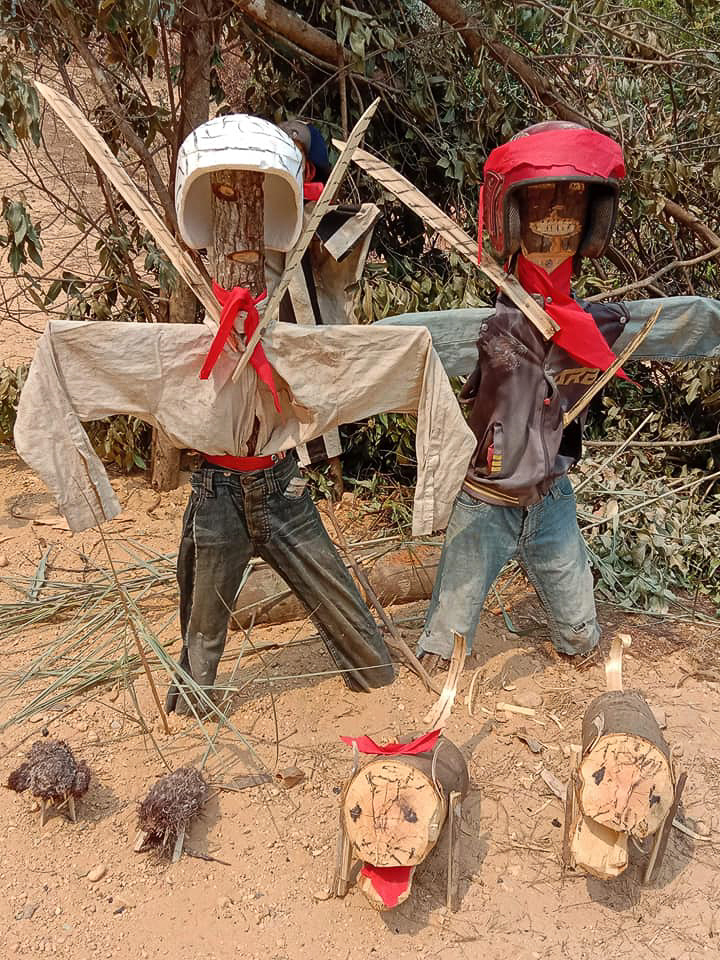 Effigies have sprung up in Laos to help people fight the terrible side effect of lockdown, being alone.

“The most vulnerable state is to be poudio, alone, without the protective influence of others. This is bo muan (not fun), and indeed a preference for being alone is often described as a pathological sign; eating alone is bo seeb (not delicious).”

In Laos, isolation is a rare word. The country itself is landlocked within Southeast Asia, bound by Myanmar, Thailand, Cambodia, Vietnam and China. While its rural population is slowly declining, in 2018, 65% of Lao people still lived in rural communities. Within many of these communities, the village is regarded as a space separate and safe from the outside world, which is rife with dangerous spirits and entities that roam unchecked.

Within the village, for many, the extended family is the wellspring of health and prosperity. According to Elizabeth Elliott, a medical anthropologist studying healing traditions in the southern lowlands of Laos at University College London, being “together, experiencing care from others, creates kamlang jai, a powerful heart”, and a soul-calling or string-tying ceremony (su khuan, baci) is called on during periods of conflict and ill-health. With this in mind, it’s easy to imagine the difficulty many villagers might have with the concept of social isolation, which has been deployed across the globe in the fight against the coronavirus pandemic.

The Lao Ministry of Health decreed in mid-April that “If you love yourself, love your family, and love our country, you must maintain a distance from others at this time”. By now, we are all familiar with either this, or at least a very similar, plea by our nation’s government, and we have been searching for ways ever since to reconcile our needs as social creatures with the temporary, vital need to stay separated. Across the globe, the transition has been shaped and sculpted by our cultural beliefs, made easier in some cases and much more difficult in others.

For many Southeast Asian communities, the rise of Covid-19 constitutes, in part, just one new front in the fight against a timeless enemy—the evil, invasive spirit. The procedures to protect against this new entity, while differing across ethnic regions and communities, have nonetheless been enacted with a speedy and culturally faithful efficiency in recent months. In northern Laos, taleo, protective talismans made from bamboo, quickly began to appear outside homes. The taleo, which is used by many ethnic groups, traditionally marks a demarcated space or event, and guards the peripheries of such units from unwanted human or spiritual visitors. It can now, too, double as a sign that the household it guards is isolating itself, per government regulations, and that any visitor should seek express permission before entering the property.

More eye-catching has been the emergence of mannequin-like effigies outside villages in the Lao countryside. Pictures shared by the Traditional Arts and Ethnology Centre in Laos depict diminutive figures armed with helmets, wooden spears and even scientifically approved face masks. The effigies have appeared both along the roads that lead to villages and even directly outside the villages themselves, serving as particularly tangible, and intimidating, markers of community boundaries. However, these village ambassadors-cum-warriors are far from untried as defenders against malevolent entities, whatever name they might go by. The effigies, known as ting mong in Cambodia, have been spotted in the Southeast Asian countryside amid several recent infectious disease outbreaks, especially cholera. In the summer of 2011, for instance, many ting mong sprang up in Siem Reap’s Banteay Srey district while an illness swept through the community.

Soum Rith, living in a village in the district at the time, said:

“It’s an old tradition that if you put a ting mong in front of your house the ghosts will see it and be afraid of it, but it has to wear clothes like a human, or have weapons, so the ghost thinks the house is being guarded by a person.”

Ting mong have once again been deployed to defend Cambodian villages against the new threat of Covid-19, only this time in prolific numbers.

Although Buddhism dominates many regions of Southeast Asia, including Laos and Cambodia, the region has longer and more deeply-ingrained roots in animism, a belief in ubiquitous spirits or phi that can and do pervade everything, including the body.

According to Lisa Arensen, an anthropologist: “It’s not that the villagers with ting mong are ignorant that Covid-19 is a virus… it’s that they know there’s a new and frightening illness around.”

Ting mong creators, according to her, may be “trying to fight it [Covid-19] off if spirits send it their way, which seems likely with all the weapons. Or they’re trying to fool this invisible illness, that bad spirits might ‘weaponise’, into giving the illness to the effigy”.

These traditional protections, the TAEC emphasises, have not precluded Lao people from practising government and bio-medical recommendations of social distancing. On the contrary, text messages, social media posts, radio and TV campaigns, posters, and village speakers have all been effective in communicating the threat of the pandemic. While some have cast into question the accuracy of government figures, both Laos and Cambodia have seemingly so far endured very successful campaigns to keep the virus at bay.

According to Elizabeth Elliott, a favourite tale in Laos is that of the “bedroom ghost”, who is said to appear if one sleeps alone. Other legendary spirits will prey on those who journey too far alone into the forest. The brave effigies of the rural Southeast Asian countryside seem to stand as testaments to the enduring ingenuity and resilience of the village community.