Love Thy Labour, by Kay Abude 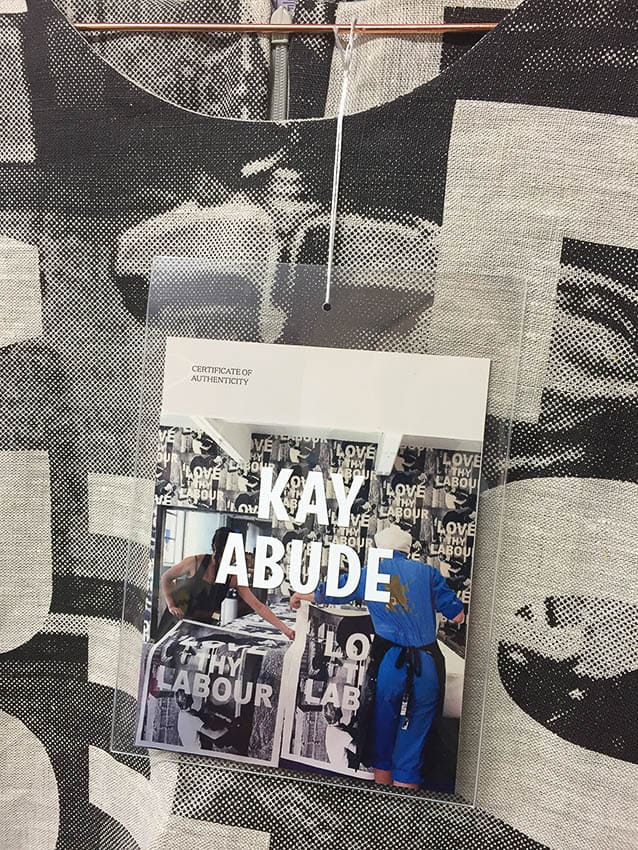 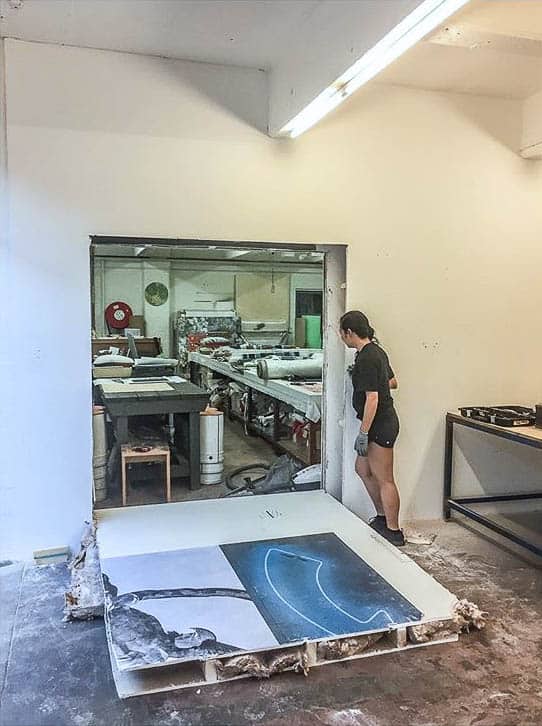 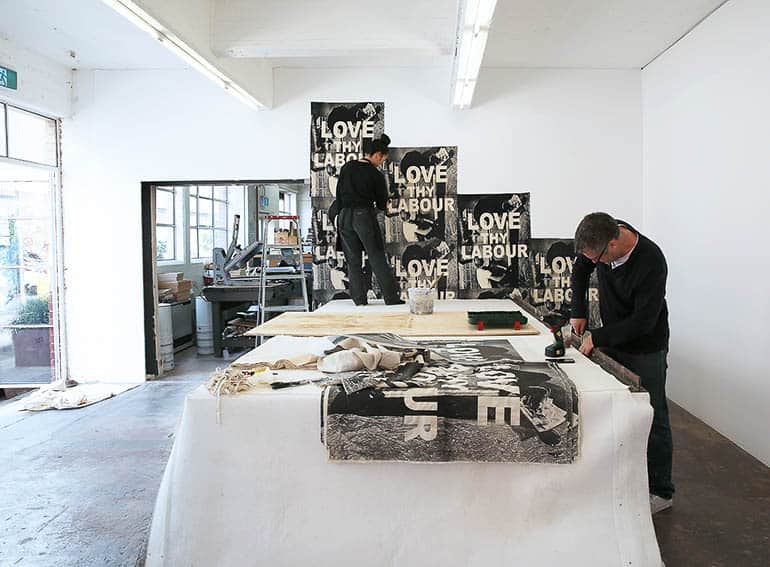 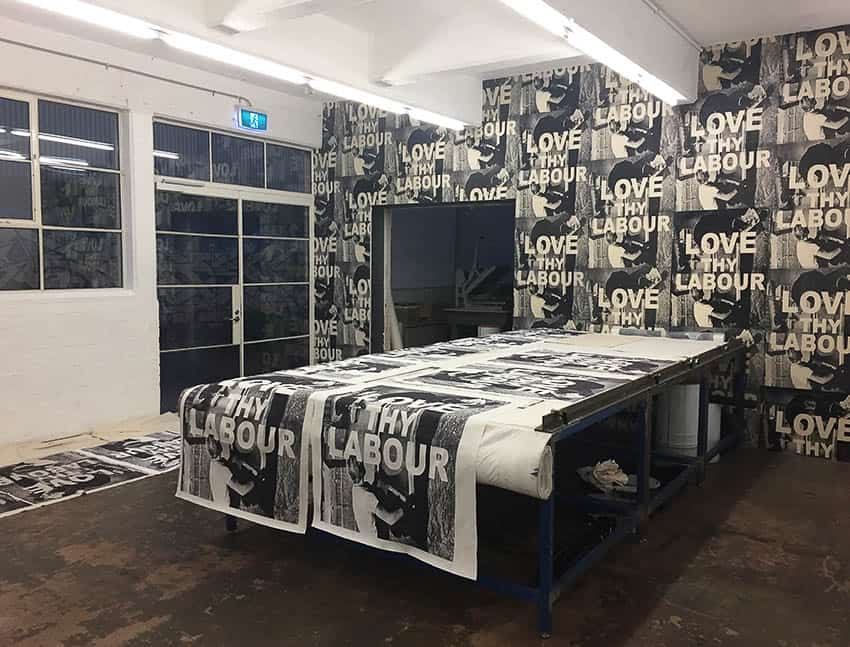 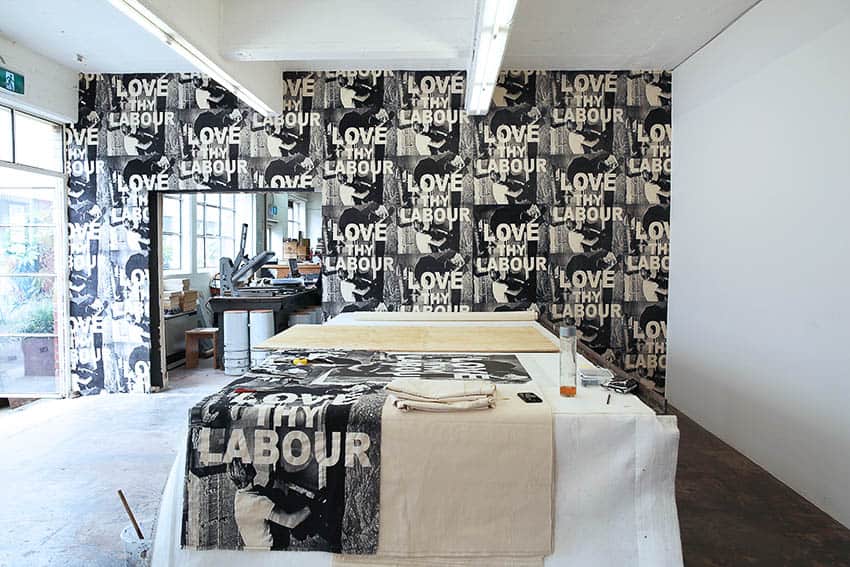 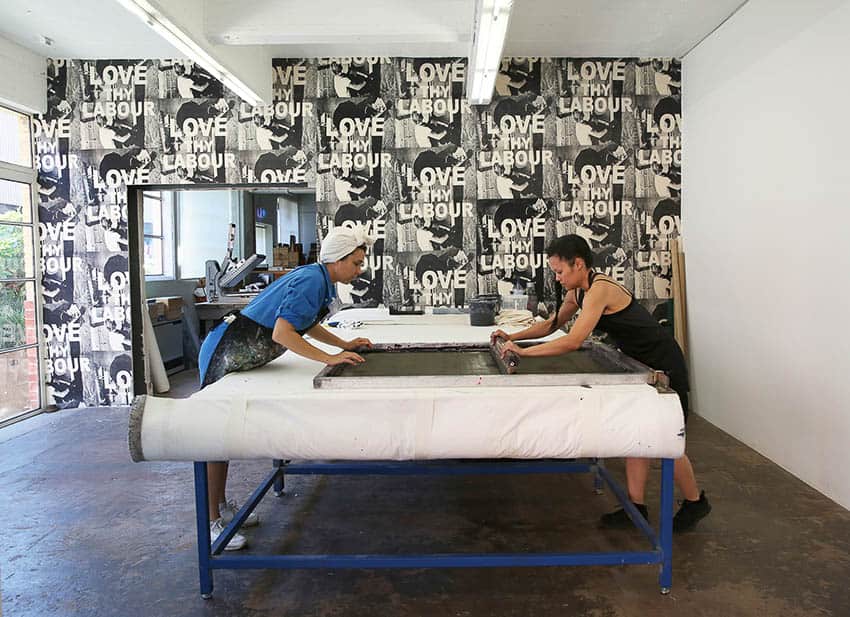 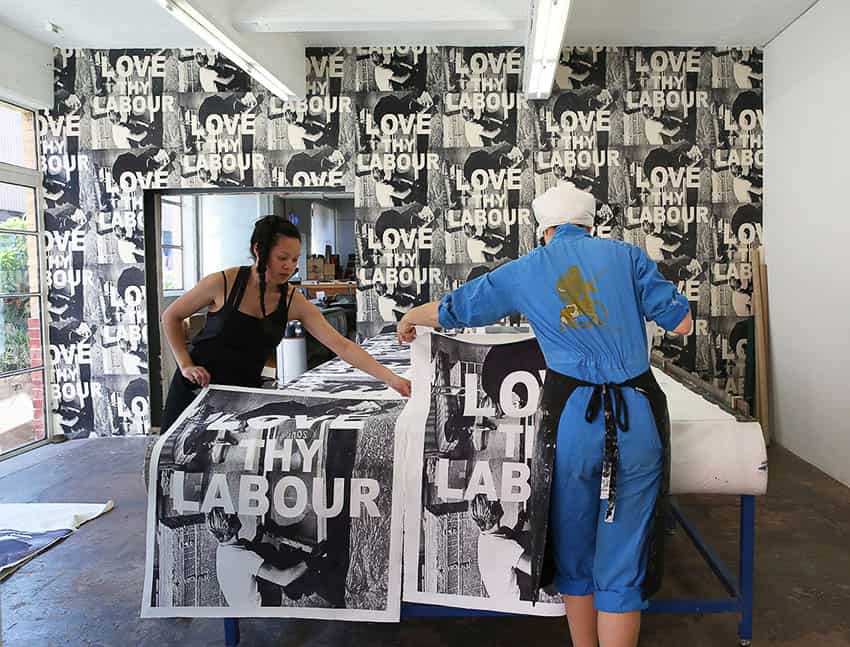 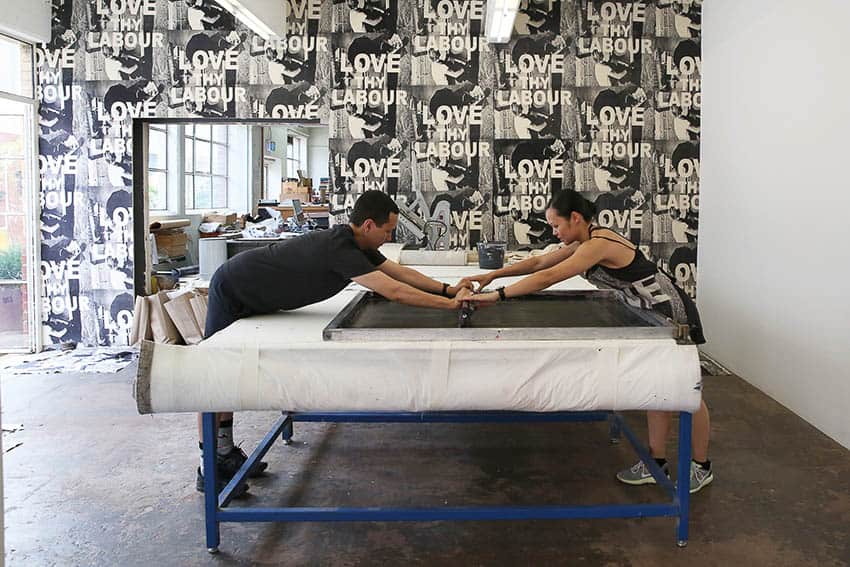 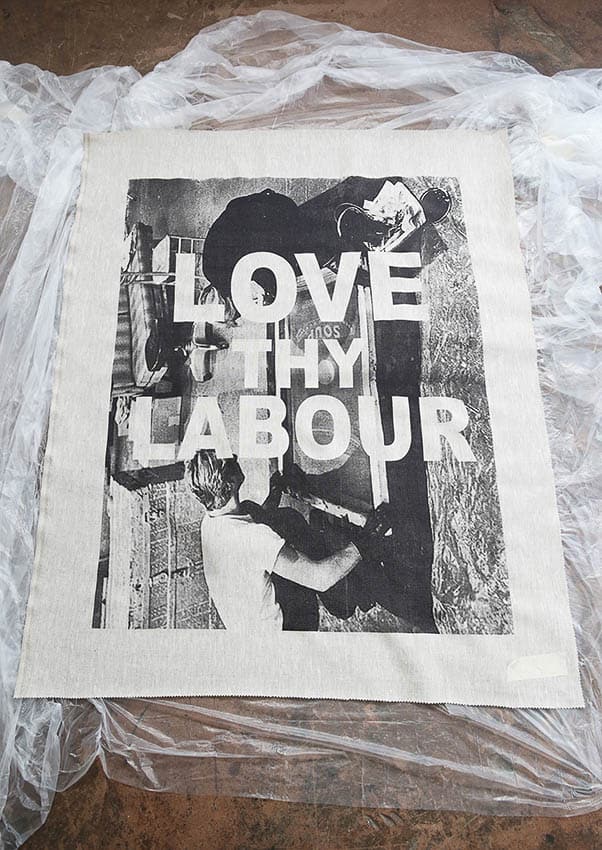 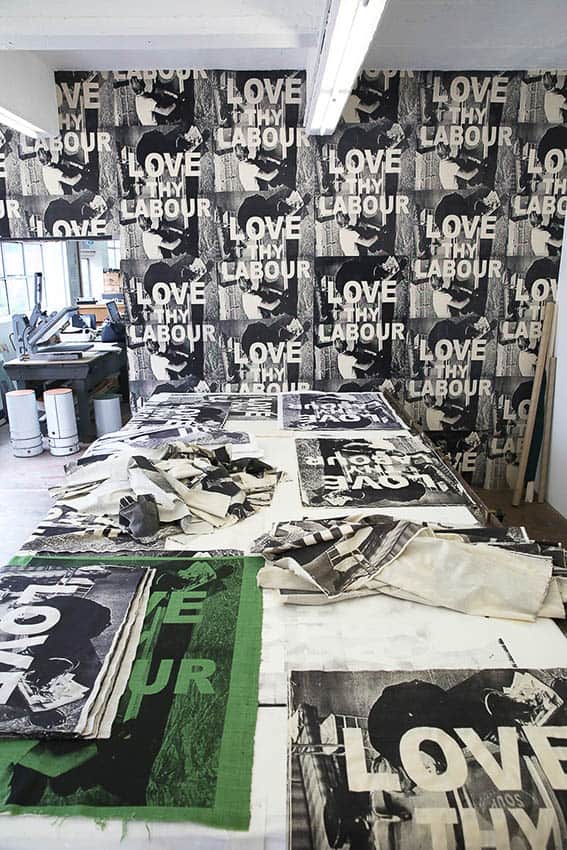 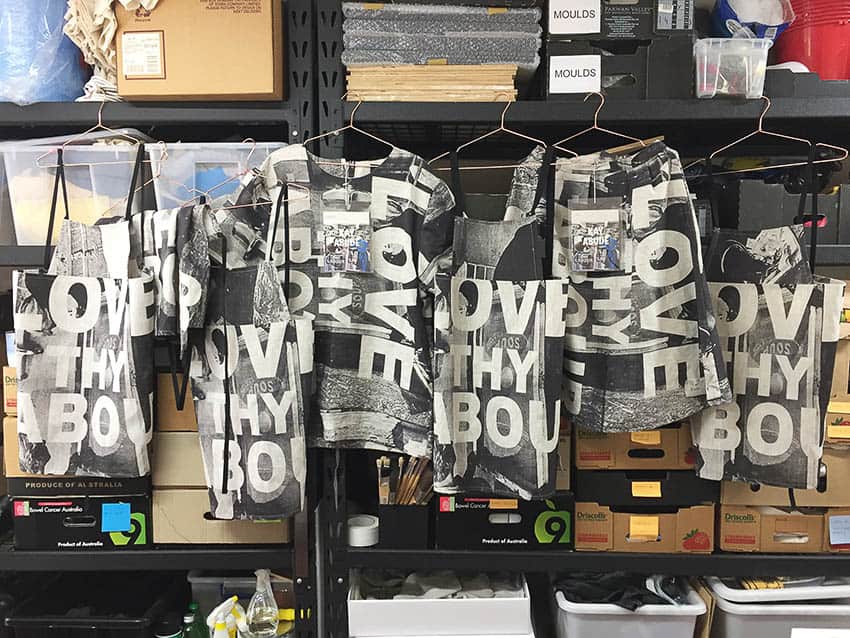 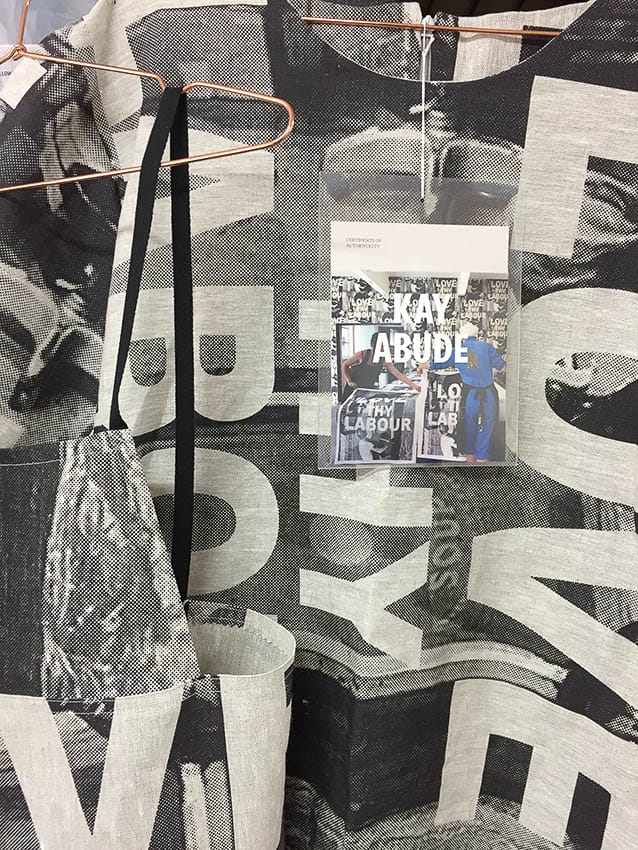 Kay Abude is an artist who seeks to honour her family’s experience as workers from South-East Asia. Born into a life where factory labour is no longer a necessity, she reproduces the meditative and social enjoyment of work in her art performances and exhibitions. You can read about her previous Piecework here. Lately, she has taken over a textile printing workshop to unite a building through the love of labour.

LOVE THY LABOUR is an evolutionary and discursive project that investigates the critical possibilities between the presentational space of the gallery and the production site of the studio. Developed in collaboration between artist Kay Abude, Spacecraft Studio and Bus Projects, the project involved an incision between Spacecraft and Bus—through physically breaching the wall that generally divides these two spaces.

The collaborative and porous nature of the project is expressed directly by the removal of a section of Bus Projects / Spacecraft’s shared internal wall, thereby physically connecting Spacecraft Studio and Bus Projects for a period of four weeks. The work undertaken during the project period necessitated a day-to-day working relationship, sharing the logistical issues of security, programming, production and opening hours. LOVE THY LABOUR requires the two organisations to enter into a relationship of trust, an open exploration of the possibilities closest to home.

During a period of “work experience” undertaken at Spacecraft Studio in September 2017, Abude obtained hands-on print-making experience and insight into Spacecraft’s production and operations. This has subsequently informed the work in development, and will be embodied through screen printed wallpaper with the slogan “LOVE THY LABOUR”. This wallpaper will be continually installed throughout the exhibition as a repetitive action, that will become the context for a series of public programs, workshops and discussions—investigating and speculating upon the precarity of artistic labour, and the complexities of its economy.

Kay Abude is an artist based in Melbourne. Her creative practice engages many different forms of making, including sculpture, drawing, photography, installation and performance. She explores themes of work and labour in relation to the factory and the studio as sites for production. Abude often uses the art gallery context as a space and place to display the labour process as art itself. Kay Abude completed a Master of Fine Art (by research) at the Victorian College of the Arts and Music, The University of Melbourne in 2010. She exhibits locally and has exhibited internationally. Her artworks are held in private collections within Australia.

Spacecraft Studio was established in Melbourne in 2000 by Scottish artist/curator Stewart Russell and English designer Donna O’Brien. Since then the studio has been committed to creating and communicating high-quality contemporary artwork and design concepts through self-initiated projects and collaborations with outstanding institutions, artists and designers. Works created at Spacecraft Studio have been exhibited and acquired for collections in significant Australian and international contexts, from the Tate Gallery London to the Tiwi Islands, from Art Basel to Paris Fashion Week. All of our conceptual thinking and research is discussed with our staff, makers and collaborators. We value the input and experience of all our staff and actively encourage and acknowledge their involvement in shaping our projects, and our future.

LOVE THY LABOUR was an exhibition at Spacecraft Studio 1 — 25 November 2017.