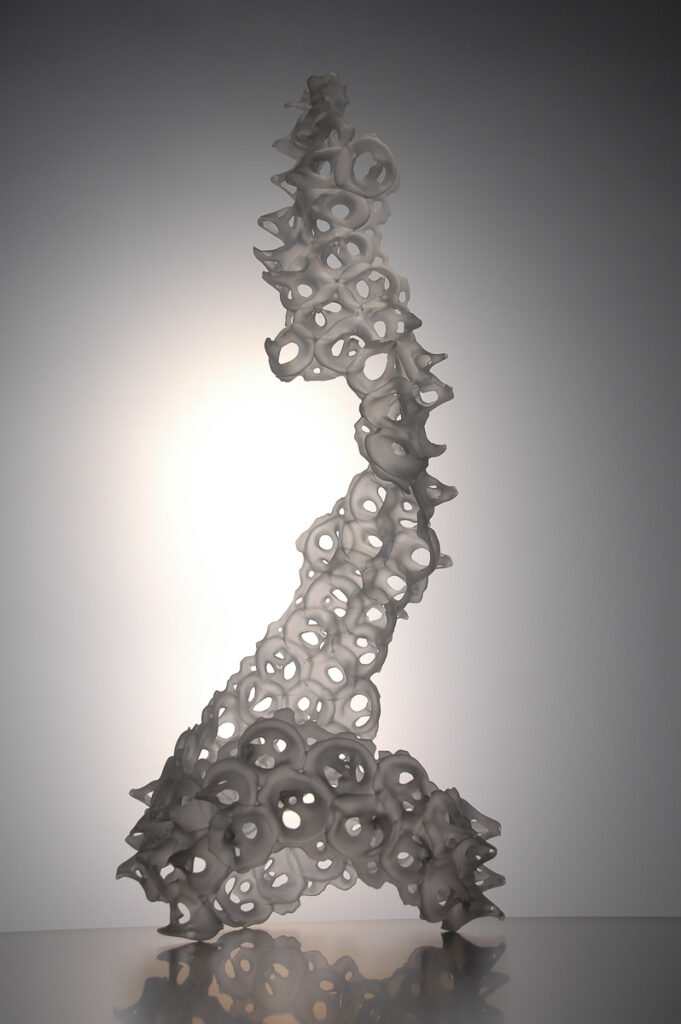 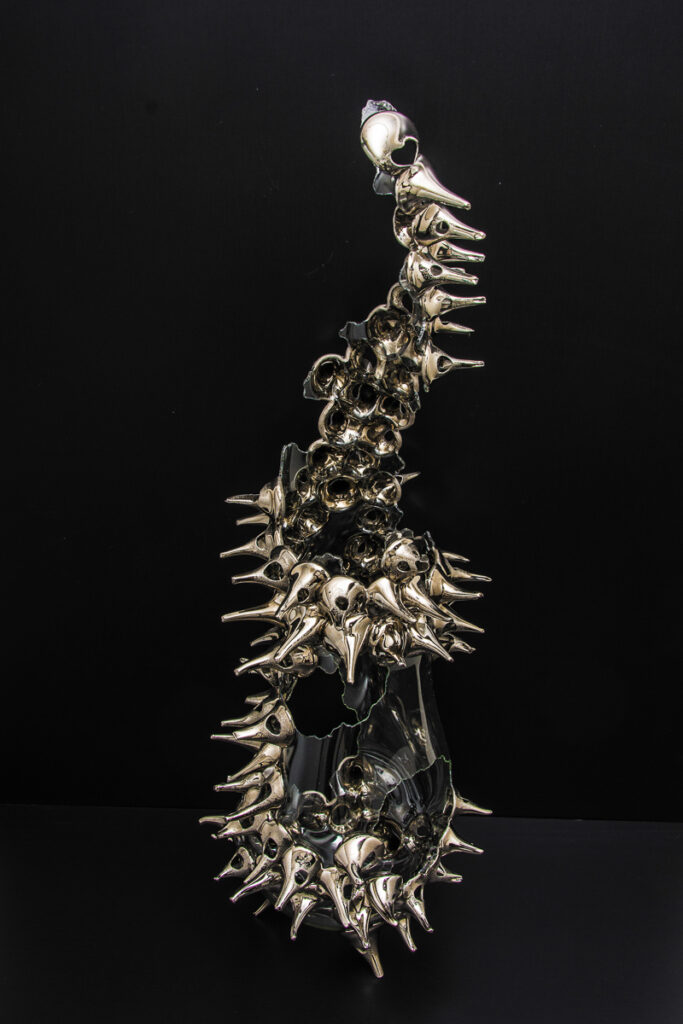 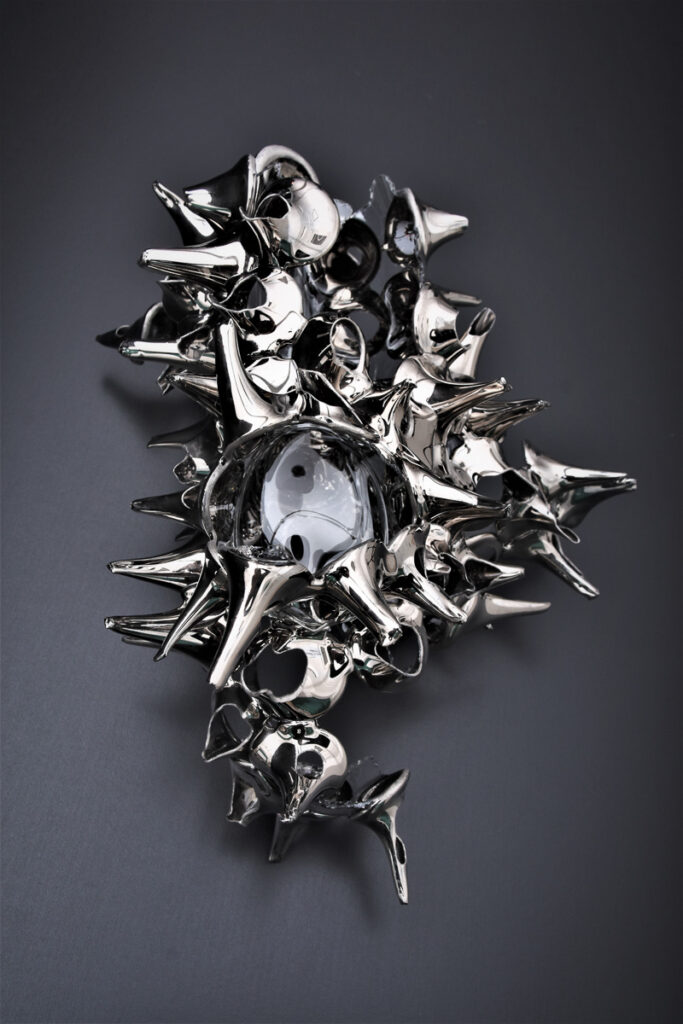 The glass artist Masahiro Sasaki follows the Japanese way of craft, or kogei, where materials comes before concept.

Since the 70’s Japan has been greatly influenced by the studio glass movement. But not having a well-established tradition in glass, Japan has historically sought technique and knowledge from the west.  Considering my art education was Western-oriented, I began to question my identity and what it meant to express myself using glass as a Japanese artist. I began to see the working process where concept came first, as in contemporary art, as contradictory.

Up to that point, I had learned that glass was simply a material, so it was important to use various other materials as required for my expression. However, in kogei (Japanese for arts and crafts,) material comes first. Through a chosen material, you express yourself.  It is almost an act of becoming one with the material and necessarily considering the material as part your body. This process of working has relevance to ideas in Eastern thought where nature and material are considered matters not to be controlled, but to co-exist. In Western aesthetics, it seems to me that concept comes first.  In the Japanese way of thinking, material possesses a soulful character of its own. From a Japanese perspective, material comes first. So I began to think of the Japanese word kogei where a creative process begins with a material. When I think of using glass it is within the context of kogei and therefore based on a truly Japanese aesthetic developed since ancient times. Japanese and western culture are fundamentally different. Considering this observation is there any need to use the same methodology in the creative process?  No! I decided to be more conscious of what is authentic and original in Japanese culture and use that as my starting point.

In Japan, one of our aesthetics about craft is the “beauty of usage”. We used to translate Japanese “kogei” to “craft” with functionality in mind. But that translation is not enough to explain the current situation in Japan. Now many Japanese makers are producing sculpture concentrating on process and materials. This prevalent way of working produces a diversity of forms. Considering this shift from functionality to sculptural form, the word “kogei” takes on new meaning. When making my work, I always arrive at form through the process of making. I am introducing the kogei way of making art with glass. I do not have a certain motif or image of the concrete object before I start to make my works. These series of my works are made by picking up the form that was derived from the process of making vessel by blown glass. I decide the shape during moment by moment intuition. Initially, I do not know what kind of completion shape it becomes while I am making it. So the final shape is undecided at first. It is not an act that I make all of the works by my intention. The pieces reveal their shape as a result of my knowledge of the material along with discoveries and intuition learned in the process of mastering my skills.

Tensei in Japanese has a meaning similar to transformation and metamorphosis. It also suggests reincarnation. Glass is inorganic, yet in a molten state takes organic shape.  After the sand is transformed (tensei) into glass under extreme heat, I guide it to form a shape. I sandblast this glass, and a part returns to sand. I participate in the cycle of transformation caused by fire and wind.  The hot glass moves softly and shows a sensual expression. I accept the movement of the glass and the form that is going to become and I make it as an important factor of the shaping.

Kogei has developed from the context of function and beauty. However “Kogei” which I think about is the moulding expression which is derived by material, technique and the making process. It is important that you chose the material and investigate the possibility of the material’s expression. The molten glass is shaped by control heat, gravity and centrifugal force with blowing.  I realized it is important how to control these aspects of energy and use them to make works with hot glass. From ancient times in Japan, we find and pray to God in the universe and natural phenomenon which is fire, water and wind etc.  Japanese “Kogei” is a culture which is effected on such basis. I feel it is a similar act to the way a shaman in the animism speaks words of God. I produce artworks to synchronise with the glass and the providence of nature. I derive the form to hear a voice of glass, and it is a kind of collaboration work with glass.

In June 2020, the Gallery Voice will hold an exhibition titled “Transfiguration of the glass art Ⅳ . This is the fourth glass art exhibition at Gallery Voice.. For more information about the artist, see her Facebook page