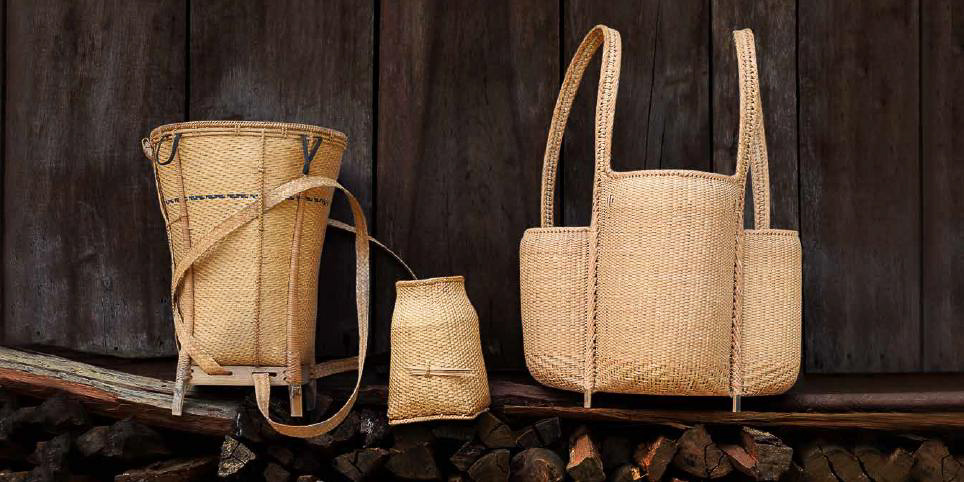 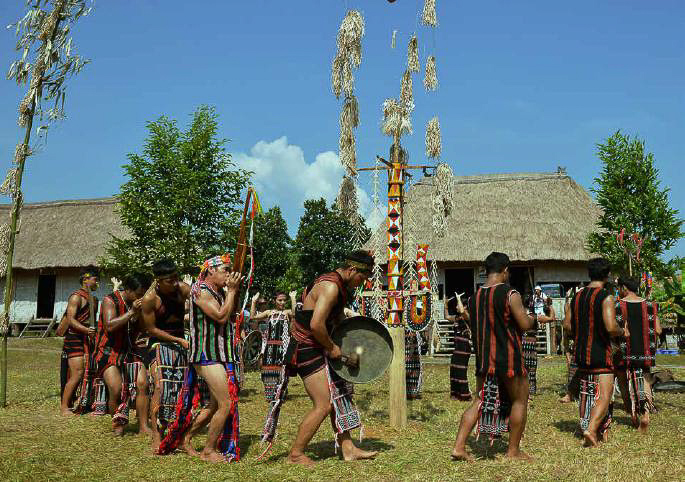 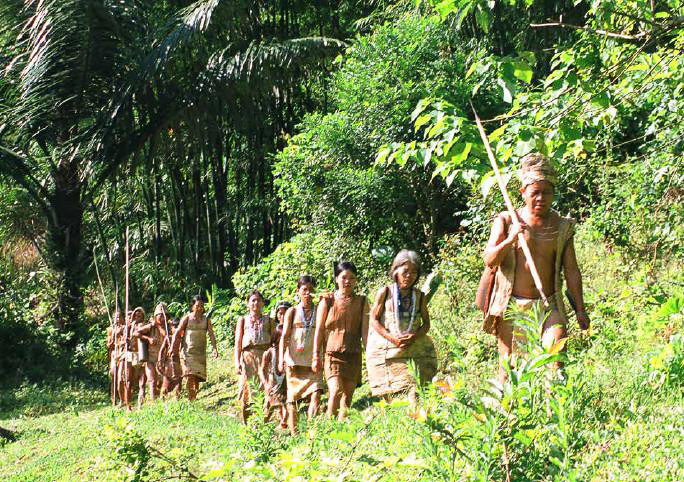 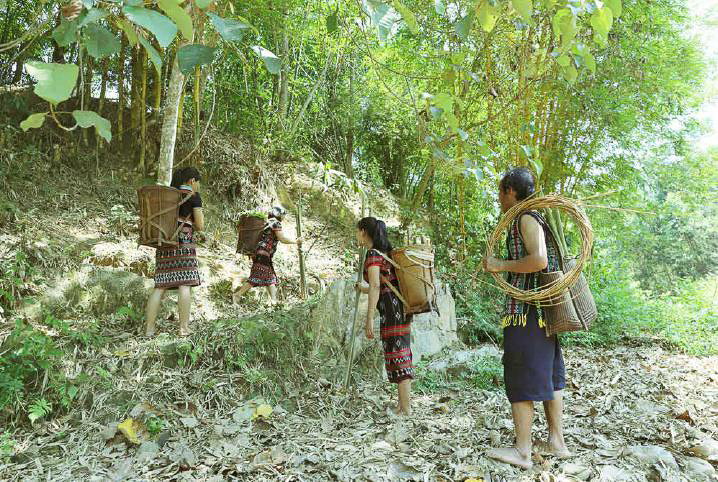 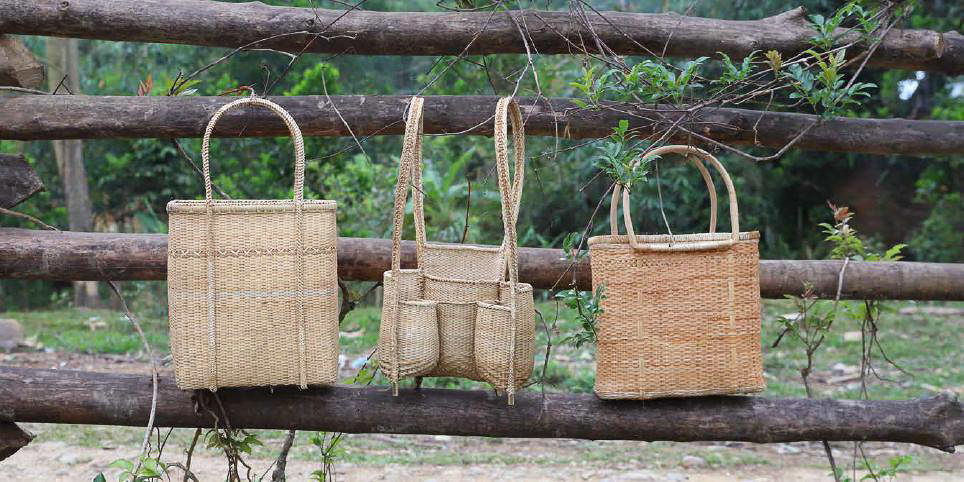 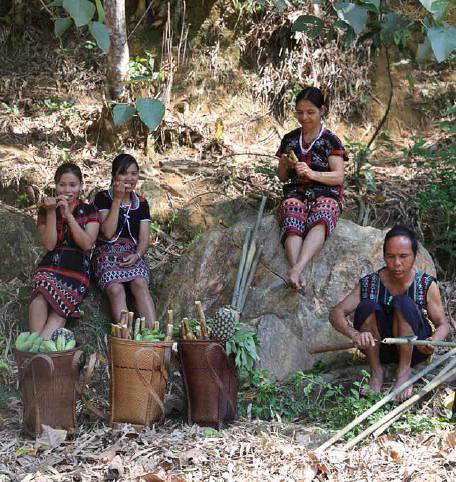 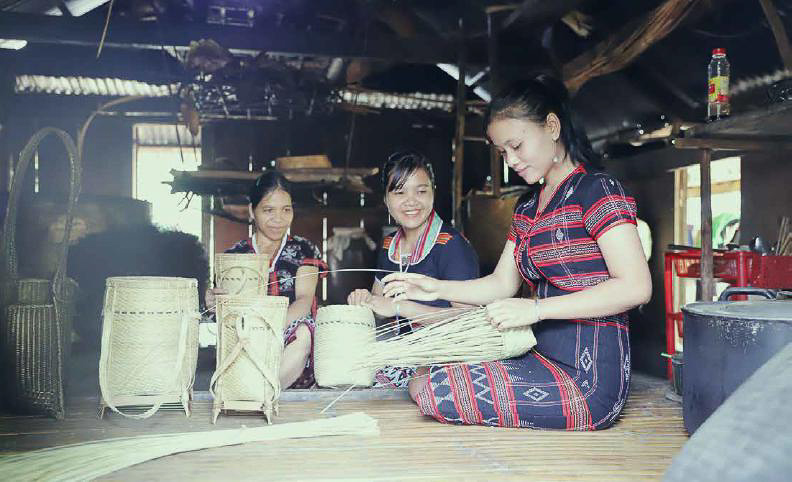 We return to Vietnam to learn about a craft classic, the backpack of the Co Tu people known as ta leec which is considered a man’s most precious jewellery.

The Annamite Range, a mountain range of eastern Indochina, is not only famous for its magnificent scenery but also as a home to Co Tu people. Co Tu community in Vietnam is a long-established and developed ethnic group of more than 70,000 individuals, living along the Annamite Mountain Range, from Thua Thien Hue, Da Nang, Quang Nam to the Sekong Province of Laos. Quang Nam province is known as the hometown of the Co Tu where the population accounting for 75% of the total number of Co Tu people in Vietnam. In their language, ‘co’ means habitat, ‘tu’ means origin or headwater. In the most common sense, co tu means the people living by the water sources, where life originates.

Year after year, Co Tu people live with the meaning of the name inherited from their ancestors by keeping the living space closed to nature. We can spot the Co Tu village surrounded by fences, deep moats, traps and spikes in dense forest and mountainous areas, which protect them from wild animals and external invasions. Houses of ancient Co Tu people are traditional stilt ones made by their skilful hands from natural materials such as rattan, wood, bamboo, and leaves.

Houses are arranged in the shape of a circle or half-moon oriented towards the guol house in the centre of each village housing the spirit of people there. More than a spiritual representative for worshipping and honouring purpose, ‘guol’ house is also where for formal meetings and festivals are held. Its unique space consists of diverse patterns on pillars and the walls of the house are constructed by Co Tu people’s exceptional wood-sculpting technique. Meanwhile moong house with the same stilt architecture is designed for resting, entertainment, welcoming guests on festive occasions. Especially, Moong houses are where the ancient pre-married custom of getting to know each other called ngu duong has been passed down subsequent generations. Around September and October is the time when Co Tu farmers celebrate reaping a bountiful harvest by hosting many festivals and giving opportunities for youngers to find their love through ngu duong. Moong houses provide private spaces for youngsters who strike up a relationship where boys have to prepare gifts to show their love towards the girls, if gifts accepted, they can spend a night at moong to connect before committing a lifetime relationship.

Much the same as customs and community activities, the traditional costumes of the Co Tu people reflect their beliefs of the universe, the sun, and the earth. The Co Tu people always attach great importance to indigo, the colour of the earth, and red, the colour of the sun. They make clothing from cotton, but it is the art of decorative beads on woven fabric that separates their traditional costume from other ethnic groups.

Like some other ethnic minorities living on the Annamite Mountain Range, slash-and-burn cultivation is a traditional way of farming among the Co Tu people, using simple handmade production tools (such as hoes, sickles, machetes, sticks, etc) and basic traditional experience. The Co Tu live on forests, streams, and rivers, they practice hunting, fishing, and gathering activities. Other than fishing and gathering as daily work, we can also catch the image of Co Tu women carrying their child on their backpack working on the field while Co Tu men are energetic in their conquest of nature through such activities as shifting cultivation, plaiting, exploiting forest product except for wood.

It will be a huge omission when it comes to the Co Tu without mentioning their traditional crafts. Co Tu individuals have many manual activities such as weaving mats and brocade, making pottery, forging, plaiting, etc. Forests produce many side-products other than wood for the Co Tu people.

Every Co Tu family has bamboo sprouts for their daily meal as it is sweet and has a chewy texture. The same thing for rattan palm trees when reaching the height of man’s head, Co Tu people will chop the tender parts and barbecue them to remove the bitter taste. Some plants that grow naturally in the forest, or other rare dishes such as ant-eggs and bee-pupae, also enrich the diversity of their meals.

No matter where they are and what they do, the Co Tu people always nurture in their hearts an eternal love for the forest.

The life of the Co Tu people depends mainly on endless green forests and cloudy hills, with their legacy of craftsmanship to create the most beautiful and durable plaiting tools that reflect the Co Tu nature-oriented philosophy. Their plaiting culture is associated with the Annamite Mountain Range, the land of so many rattan and bamboo, which are the two primary plaiting materials.

Not only using raw materials such as rattan, bamboo, fern, pineapple leaves, etc in plaiting, the Co Tu also creates unique colors for dyeing plaiting products by using forest plants such as wild grass or leaves. The plant-based dyeing technique was accidentally discovered when people went to the forest and the latex stuck to their fabric, creating various pieces of colors on their arms, shirts, dresses, etc since then picking up a new technique to make dyes. Before plaiting, rattan and bamboo are usually soaked in spring water or turned into dried backpacks and then put on smoked kitchen corner to make the raw materials durable and not to be damaged by insects. When plaiting, depending on the size of the products – large or small – they pick splits accordingly. On the other hand, to facilitate the plaiting process, the Co Tu people often stretch splits under the trees to create straight lines.

We cannot tell exactly when and how the Co Tu plaiting culture is shaped and accumulated. The only thing we know is that every Co Tu man reaching adulthood knows how to go to the forest or to catch fish at the stream or even to plait a backpack.

From the production stage to religion and spirituality, the backpack is always part of daily life. Plaiting backpacks is a chance for the Co Tu man to prove his skills to the woman because a beautiful backpack is always proof of skilful hands. The Co Tu people have many kinds of backpacks, each of them have become extremely sophisticated to suit the needs of each member of the family and suitable for their daily work such as backpacks that contain rice (h’dool, ul dool), vegetable (por eeng, ul teeh), jewellery or precious items (p’rom/g’ruh), cassava (dong kier), wood (dong mat); backpacks for men hunting (to leec, ta leec). Co Tu children have been allowed by their mothers to sit in their backpack, swaying along with their mothers in the fields. They travel in the backpack the fields collecting cassava roots, corns, or to the streams catching fishes, shrimp. When reaching adulthood, the backpack is where the boys hide their “love” gifts to send to the girls during the ngu duong season. The backpack is also the place where Co Tu girls keep and cherish their wedding gifts to bring along when moving in with her husband.

Backpacks are considered jewellery, so Co Tu men always try to make the best and most beautiful backpack that fits a specific body shape or use purpose. Backpacks for men must be plaited with many compartments to carry items. If a Co Tu man wants to marry a Co Tu woman, he must know how to plait a backpack before the moon seasons, how to dance, or play instruments. For the Co Tu people, the backpack is not just an object, it also represents national pride.

The man of the house

And the whole life of Co Tu men is encapsulated in his ta leec. This kind of backpack has three compartments: the middle compartment and also the largest is called the wife compartment (or the mother compartment). This compartment usually warms rice and food for the upland seasons, keeps the machete for slash-and-burn and upland cultivation, and as a protection against predators and ghosts. The other two compartments are similarly plaited but smaller. The right compartment symbolizes the firstborn child and is used to hold drinking water, the left one representing the younger child is used when travelling through forests to pick bamboo shoots, vegetables or catch fish and frogs in the streams: these gifts of nature are always reserved for the youngest child.

All Co Tu men know how to plait, but not everyone knows how to plait the ta leec. Only the skilful, clever and savvy ones who understand the material and the plaiting technique can devote their whole heart into creating the classic ta leec. To plait ta leec, Co Tu men always plait the wife compartment first, then the other two. Only the firm and strong rattan are used for plaiting ta leec to boost the ability to lift and carry heavy loads. When it comes to the baseplate, Co Tu people are very creative in making it sparsely plaited so whenever wading across streams or catching fish, water is not congealed. Moreover, the top of the backpack is made of some rattan splits, which make it look charming and unique.

Along the Annamite Mountain Range and Tay Nguyen, some other ethnic minorities also make three-compartment backpacks but no one can make compartments as equally round and beautiful as the Co Tu people do. The secret is when having finished a backpack, they fill it up with sand and soak it in a stream for a long time, the sand puts pressure on the backpack and makes it equally round. After the process of shaping the backpack, the Co Tu hangs it in their kitchen attic, until it is smoked for some time and turned into a shiny black colour. As a result, one backpack can be used up to 20 or 30 years.

The longer the backpack is used, the more beautiful and shinier it becomes. No matter where they travel, Co Tu men always “carry” their wife, children, and land on their shoulders. As in the Co Tu anthem, it calls the sun to wake up, calls the sunset in the mountains, calls for a full harvest for the village, calls love. The backpack nourishes the soul of every Co Tu, nourishes the love of their homeland.

The article by Nhi Nguyen is based on information and images from our friends at Vietcraft.