A Tjanpi world: Filled up with stories from the land 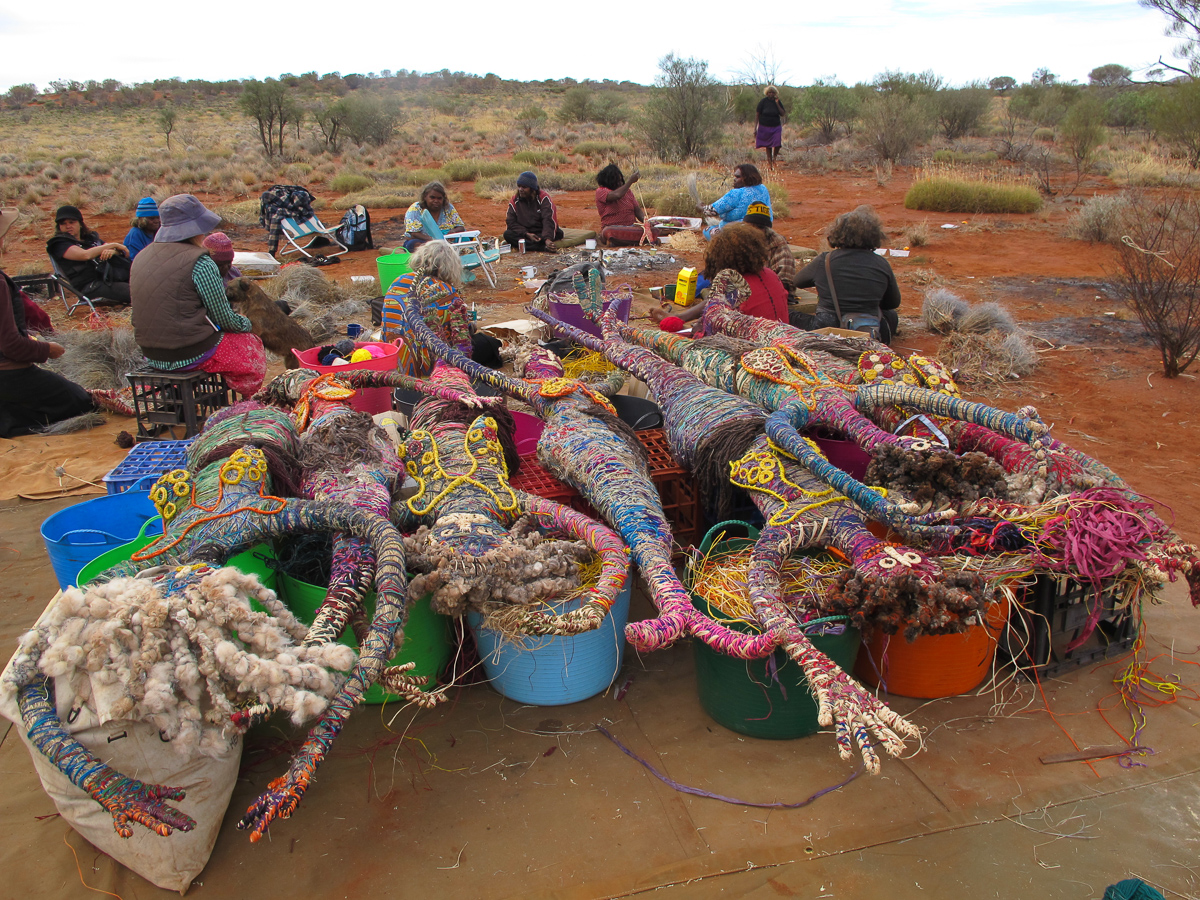 Kevin Murray writes about four recent bodies of work that show how Tjanpi Desert Weavers is now taking its epic stories to the wider world.

Tjanpi means “desert grass” in the Pitjantjatjara language of central Australia. It has come to refer to objects woven with grass, from baskets to sculptures. Tjanpi began in 1995, when Thisbe Purich, then working for the Ngaanyatjarra Pitjantjatjara Yankunytjatjara Women’s Council, introduced basket weaving to Blackstone, a remote community in the Western Desert. The aim was to provide women with a culturally appropriate means of earning an income. Previously, they had made circular manguri, a head accessory that provided a base for the first baskets. This project morphed into the social enterprise named Tjanpi Desert Weavers, which quickly flourished as women expanded its creative possibilities. It proved popular around Australia, particularly in museum shops where visitors could pick up a basket and smell the smoke of the campfire around which it had been woven. Tjanpi now represents over 400 women artists, covering 350,000 square kilometres and 26 remote communities.

The fibre sculptures take many forms, including bush animals, everyday objects, women and mythological figures. Tjanpi sits alongside its mostly male equivalent of Papunya Tula, which developed the use of acrylic to tells stories of country through dot paintings. But as a craft, Tjanpi had the added dimension of direct engagement with its environment. An important element of fibre work was going into country to gather materials.

This sculptural way is a whole other new way… we go out into the country to the actual place where the stories take place, where those dreaming tracks move through the country. We go there and we find the materials. These sculptural pieces here are filled up with the story from the land. Our children watch us doing this and they learn directly from us. They are all getting to know the stories now, but in a really different way

Tjanpi is mostly made communally by groups of women. Tjanpi Desert Weavers guarantees to buy every object made from communities. 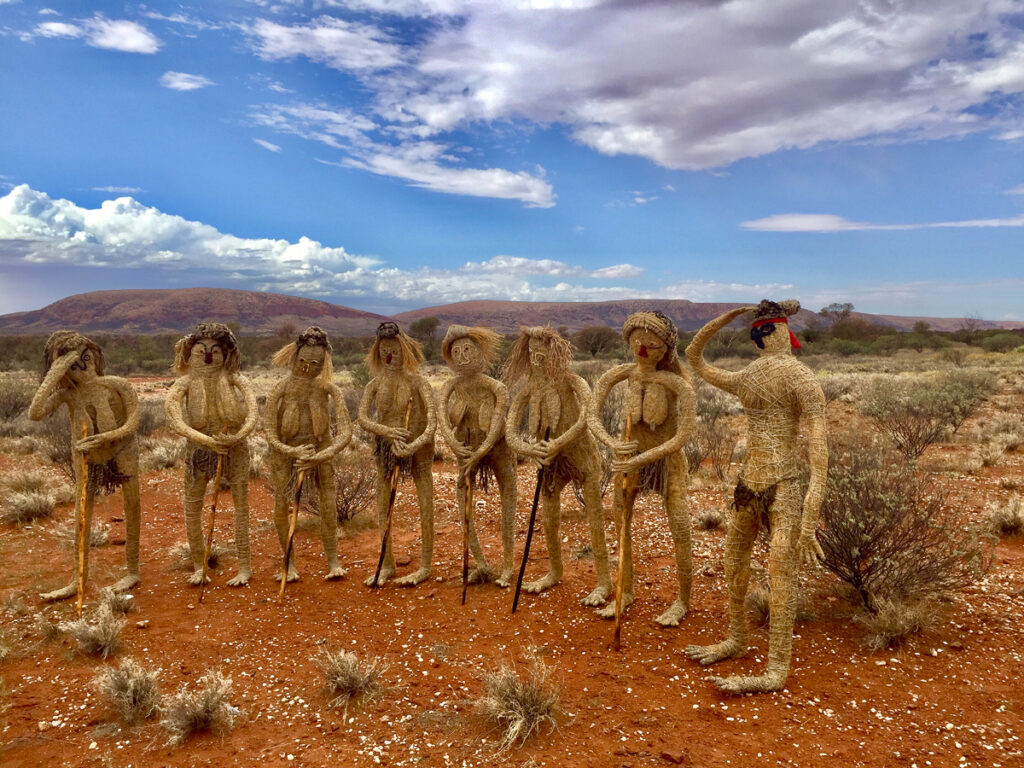 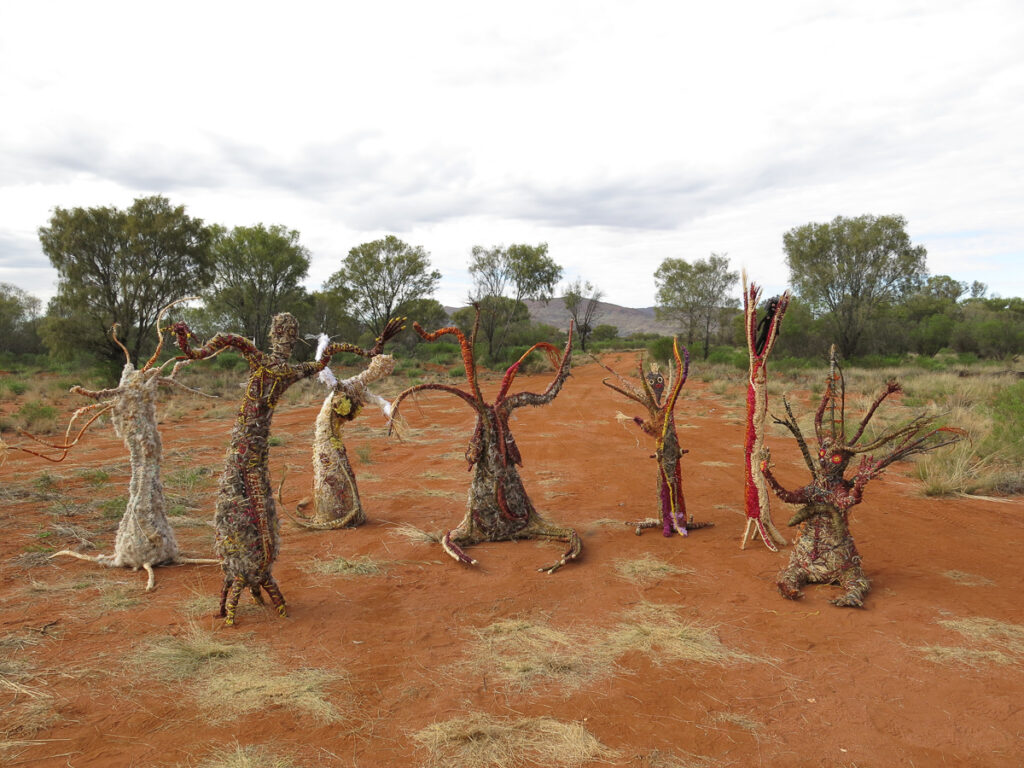 The Seven Sisters, known in central Australia as Kunkarangkalpa, is an epic story distributed across the continent, with elements of the landscape representing separate chapters of the story. Referencing the Pleiades constellation, it tells of an older man who chases seven sisters across the sky. This has parallels with stories in other traditions, such as the Greek myth of Orion who hunts the daughters of Titan Atlas. Alongside the rainbow serpent story, Kunkarangkalpa is one of the songlines that spans the continent.

Songlines is a cross-cultural term, a passport to the deep knowledge embedded in the land which we now all share. They are our foundational stories about the creation of this continent and critical to the sense of belonging for all Australians.

Tjanpi organised the production of works for the Songlines touring exhibition. The artists gathered in Cave Hill, one of the sacred sites for the story when Wati Nyiru’s penis gives chase to the women who escape through a small opening at the back of the cave. From this place emerged Minyma Punu Kungkarangkalpa (Seven Sisters Tree Women) now moving through the UK. 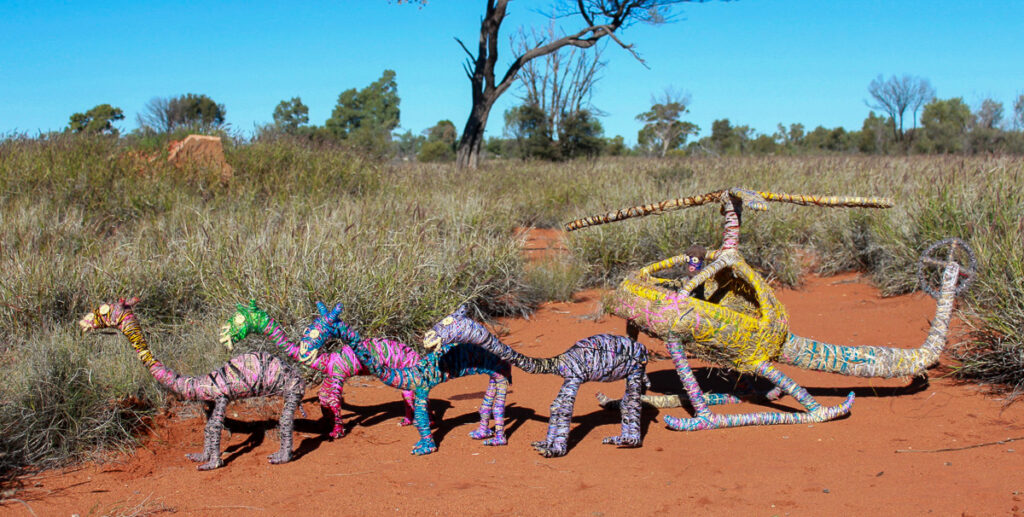 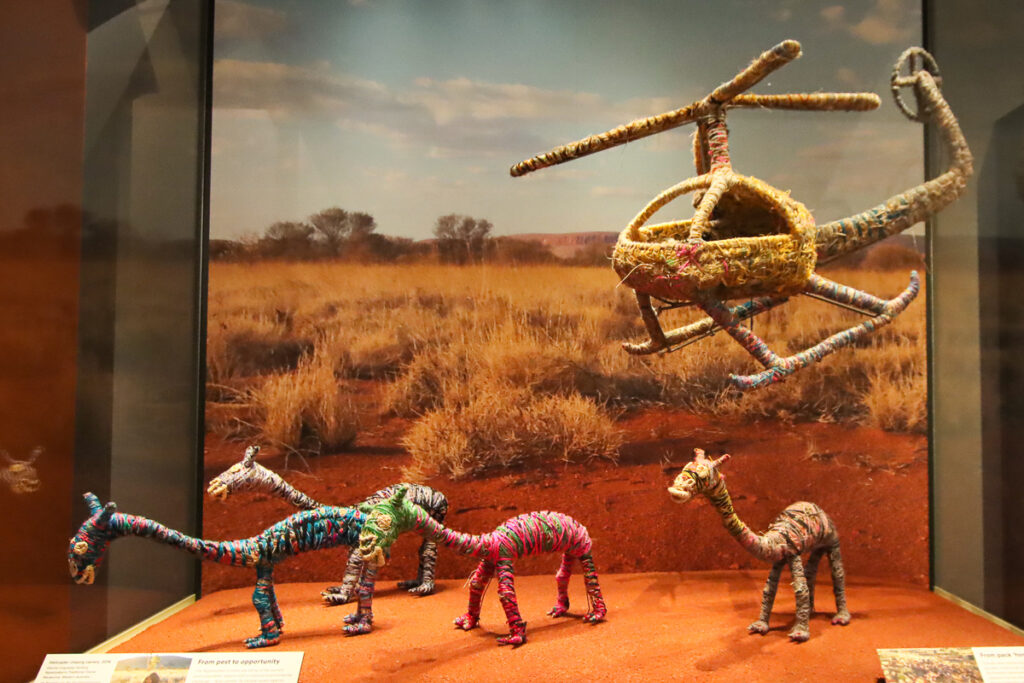 The narrative oeuvre of Tjanpi extends beyond mythology. The new West Australian museum, Boola Bardip (“many stories” in Whadjuk Nyoongar), has three sets of works made by the desert women. In the case of the Changes museum, the chase takes on a new form in the use of helicopters to cull camels (Australia is purported to have more camels than Saudi Arabia). These sculptures were made by Dianne Golding from the Warakuna community in Western Australia, near Docker River, 330km west of Uluru.

Camels are looked on fondly because of their association with the Bible time. I remember seeing my first Tjanpi camel while visiting their shop fifteen years ago, being told by a proud artist how it reminds them of the time of baby Jesus. Despite their damage to the environment, the killing of the camels is a source of sadness. 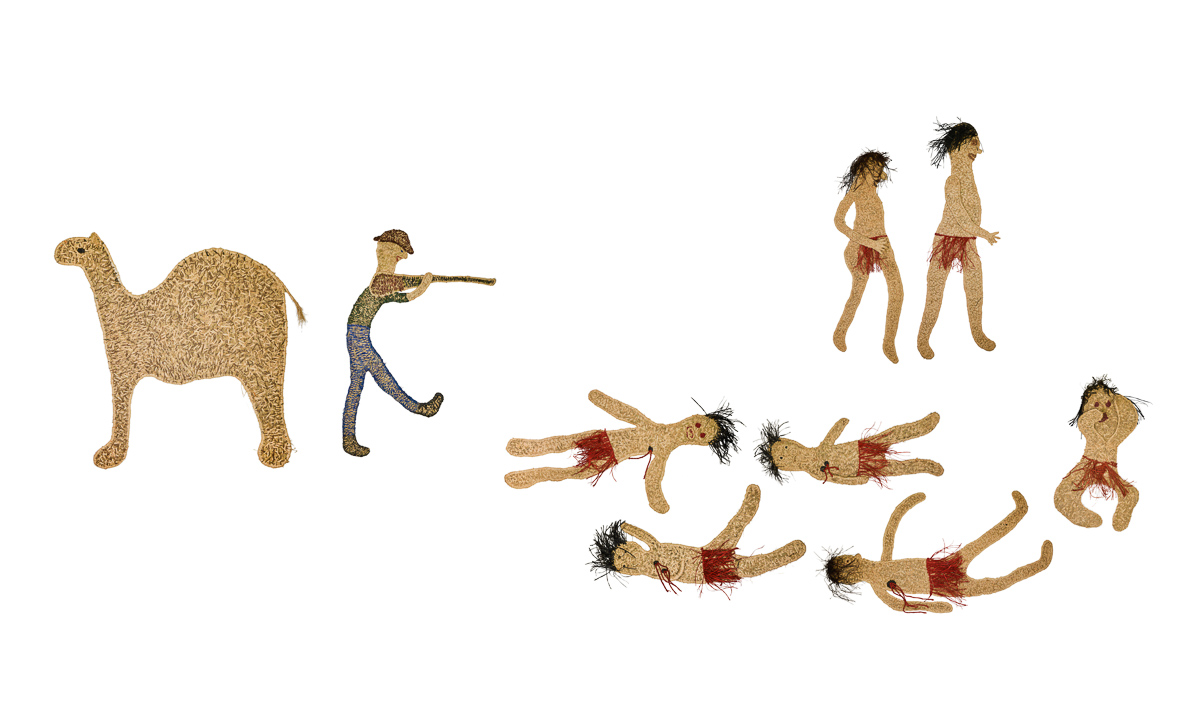 Camels play a role in another significant work that is currently on display at the inaugural Indian Ocean Craft Triennial in Perth. In the Tutjurangara Massacre, it was the local Pintupi population themselves who were the object of the hunt. During a drought, when food was scarce, a group of white men left a young camel to feed, which was taken and slaughtered by local Ngaanyatjarra for meat. The “whitefellas” then hunted and killed all the Ngaanyatjarra men they could find with their shotguns, desecrating their bodies.

This work is made by Warakurna-based Tjanpi artists Nancy Nanana Jackson and Judith Yinyika Chambers and consists of ten two-dimensional sculptures. It is made from locally collected crushed Minarri grass, wool, wire and raffia. While this story had been passed down through generations, the massacre is little known beyond the community. It offers a long overdue memorial of their relatives. 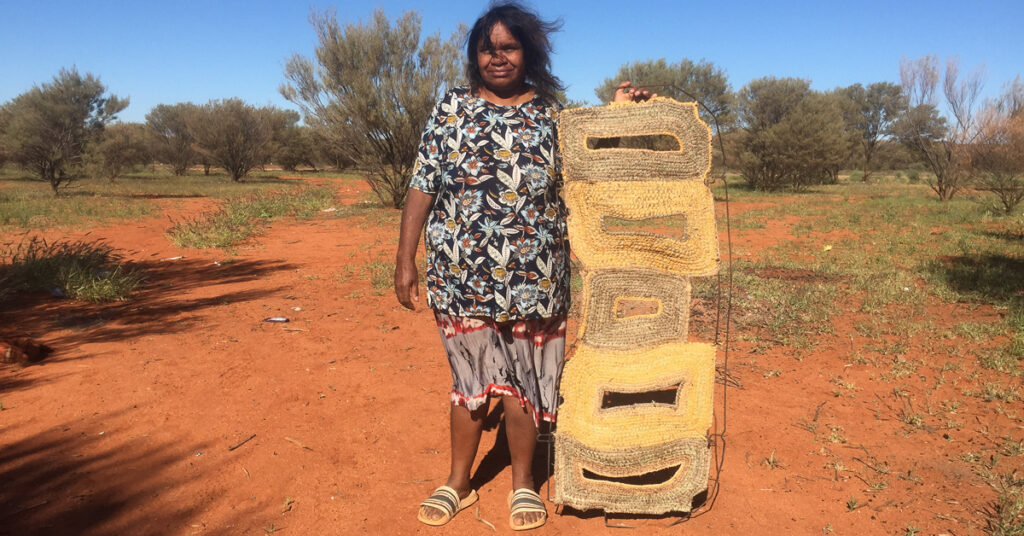 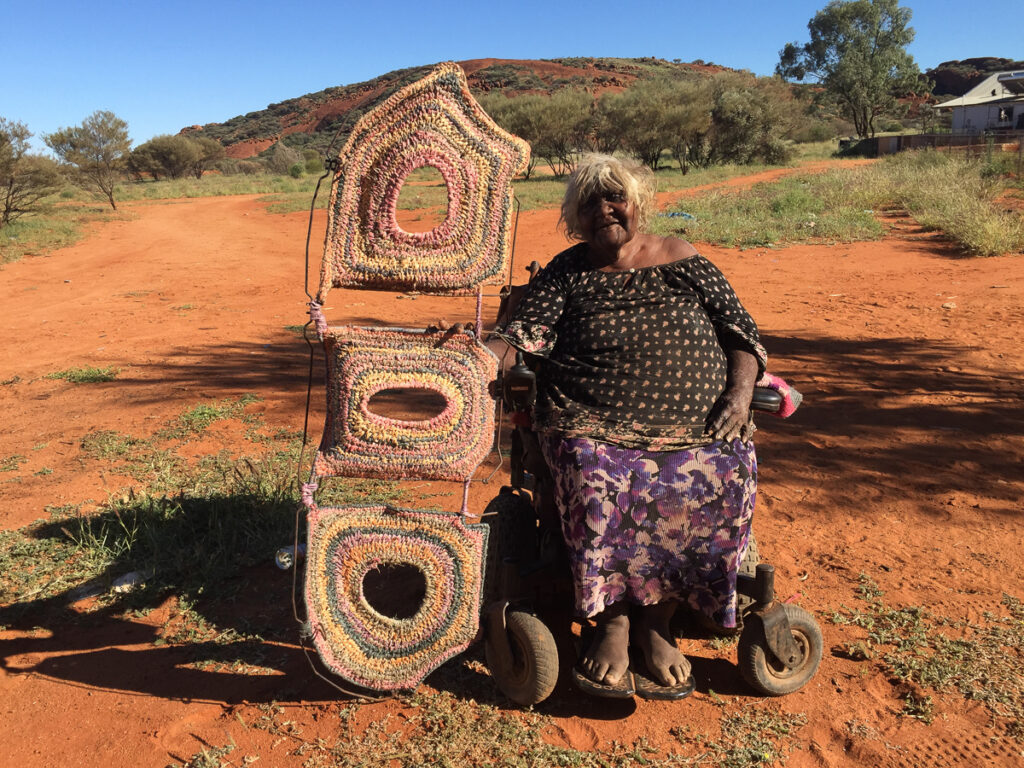 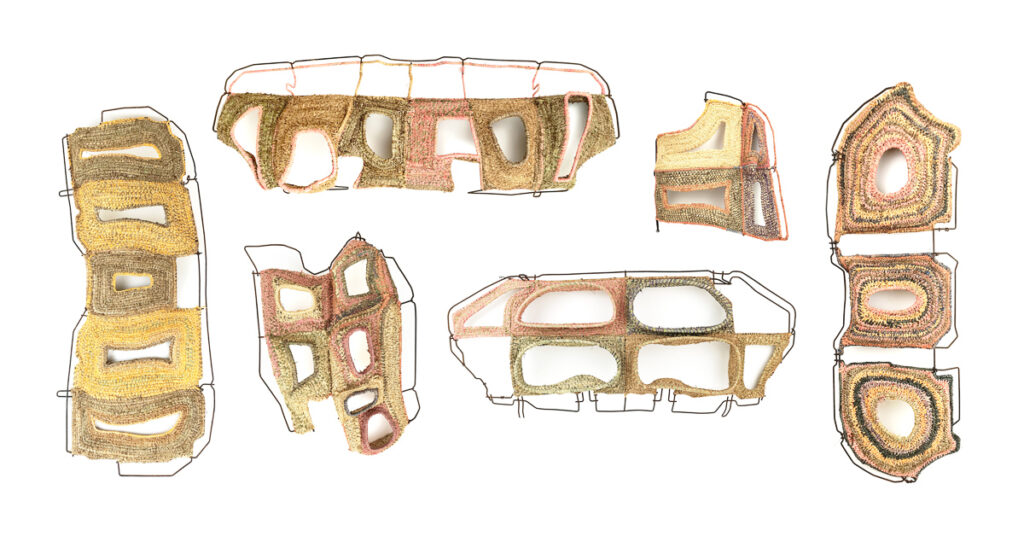 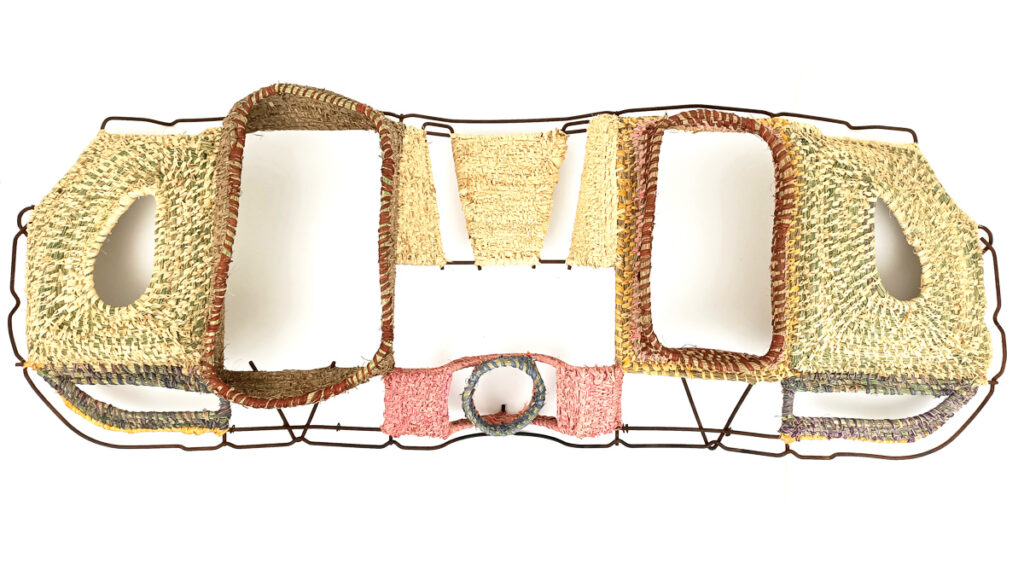 Recently, a new series of works has evolved that is drawn from the ubiquitous car wrecks found in outback Australia. Tjanpi initially evolved out of a make-do spirit, combining natural materials with processed fibres like wool from old jumpers. Shapes from Country extends this process with hanging fibre sculptures created by weaving native grass onto found metal frames, taken from burnt-out cars. The works reference shapes and forms found on country and in the tools and equipment made and used by women in pre-contact times. These include mina (bird nests), kapi kartalpa (rock holes), wira (digging bowls), manguri (a ring used by women for carrying heavy loads on their heads) and piti (a wooden carrying dish).

Tjanpi Desert Weavers continues to thrive, despite the pandemic.  It has another celestial exhibition, Punu Kutjara, which is touring  Brussels at Before Time Began: Contemporary Aboriginal Art Royal Museum of Art and History, Brussels, Belgium 15 October 2021 – 17 April 2022.  This work was acquired by Fondation Opale in Switzerland.

At home, the COVID-19 pandemic has actually seen their work increase. Tjanpi have been very successful in selling weaving kits for people to make their own baskets. They sold $AUD100,000 of fibre art just in May. 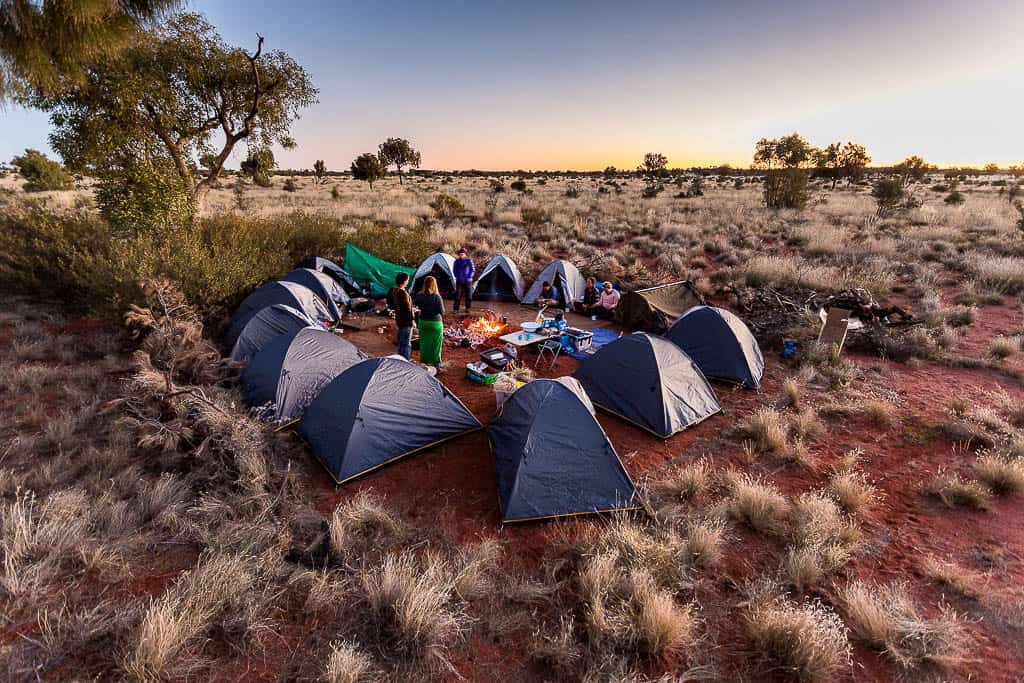 Full circle: Tjanpi, Polyglot and FORM’s Manguri Wiltja project
Andrew Nicholls writes about FORM’s project with Tjanpi and Polyglot Theatre that discovered the wiltja as a symbol of home. 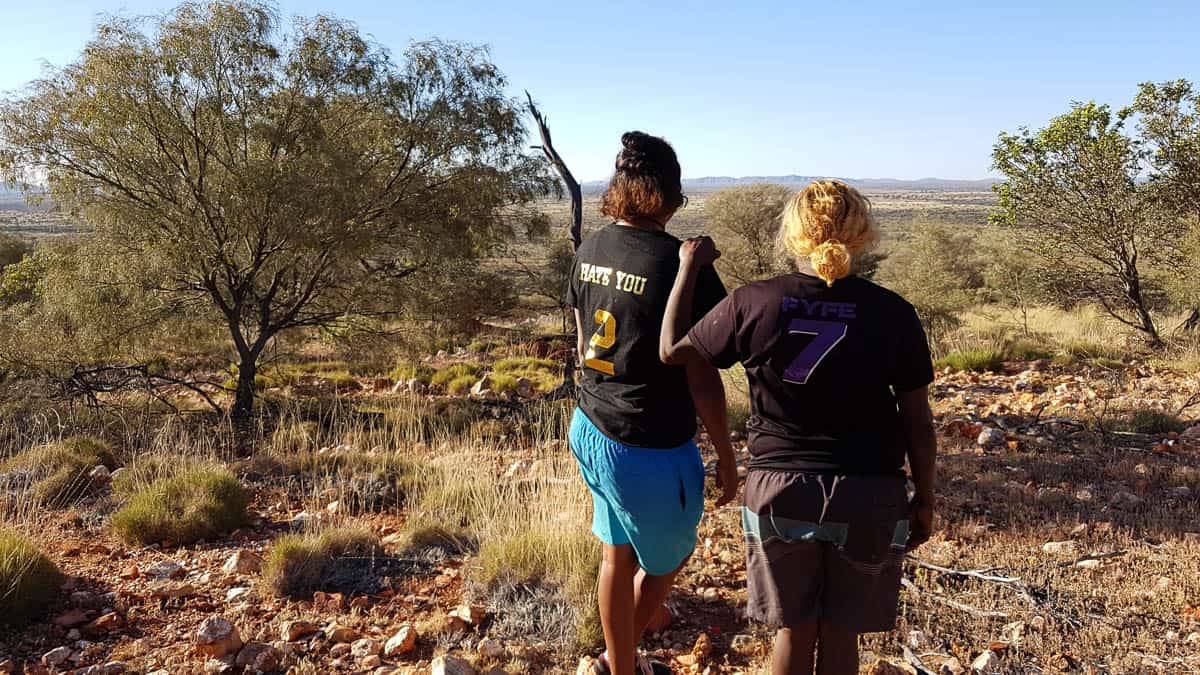 Ngurra: Finding our way home
Glenn Iseger-Pilkington finds a sense of home with the Ngaanyatjarra community, grounded and connected through Country.