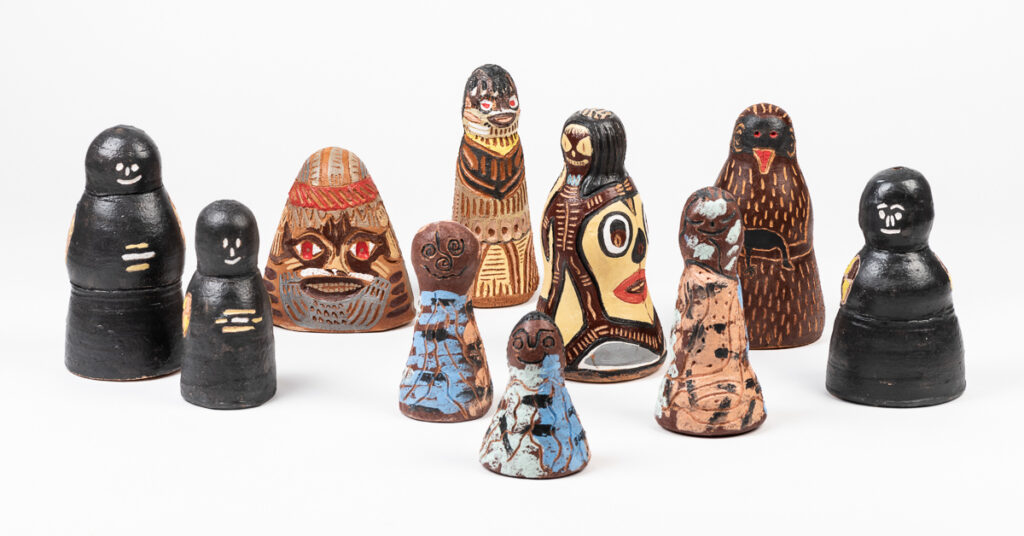 Philomena Yeatman began her career at the Yarrabah Art’s Precinct in 1991, firstly experimenting with ceramics, print, weaving and painting. Philomena is a renowned weaver whose grandmother taught her to make baskets and mats using pandanus and traditional dyes found on Country. A Gunggandji woman, born in Cairns in 1960 and raised in Yarrabah, Philomena Yeatman has many stories to share on the subject of Hairy Men and the Little People.

My grandmother and father told me about the Hairy Men and the Little People. Others call the Little People the missing tribe. There are a few types of Hairy Men and Little People living around Yarrabah. Bina Bina man is tall and big. Bina Bina woman is a bit smaller. They have really long ears and are really smelly. One night a man was driving up around Angel Bend, he was heading back to Cairns when he saw this fella in a big coat walking up the road. When the man got closer, he realised it was Bina Bina. Bina Bina wasn’t wearing a coat – it was his ears covering his body. The man got a big fright and took off.

There is one Hairy man that looks like a lizard. We see him all over. We have a shack around the point on the beach. I heard something come up on the step. When I opened the door, I saw him. I then went outside to see if I could see him, but he was long gone.

There is one other man who lives near the waterfall area at Yarrabah. One day my grandmother and other grannie were walking home from fishing near the point. When they got near the waterfall my grannie who was at the back heard a noise in the bush. She looked and saw a very black tall big man with warts all over his face. It was the same man my uncle would leave tobacco out for when he was camping down at the waterfall. When my grannie saw the big tall man, she said ‘not you again’. She said she wasn’t scared.

One day my Nanny and Pop were walking to a place called Bulburro, to collect yagal [pandanus] for weaving. They came across some little people painted up in ceremony colours. So my grandfather told my grandmother to keep walking along. He then stood up and talked to the little people. He was talking language to them and he asked them where they were going. They told him that they were going for a meeting at King Beach. They had spears. My grandparents saw the little people a lot. The little people left them alone.

Wundju is the name of a type of one-legged man who looks like a bird and smells really bad. He is in the mangroves and my sons say they smell his stink. He tried grabbing my sister one night when we were camping at Woring. He heard her crying in the night and he came for her. My dad got up and lit a fire and Wundju went away.

The Lost People are everywhere but they are shy and usually only come out at night. But sometimes you will see evidence of them during the day. Sometimes you see their fire smoke coming out of the rainforest. I sit on the back veranda with my grandchildren and look up in the hills. I say to the kids when they are naughty, “Those Little People and Hairy Men are watching us all the time. You better be good or they will come for you tonight!”.

The “Hairy Men and Little People” collection by Edna Ambrym, Michelle Yeatman, Philomena Yeatman, and Stanley Connolly can be viewed and purchased via Shop.ciaf.com.au — the Cairns Indigenous Art Fair’s offical e-commerce platform — as well as all works from the Where’s Your Permit? exhibition.