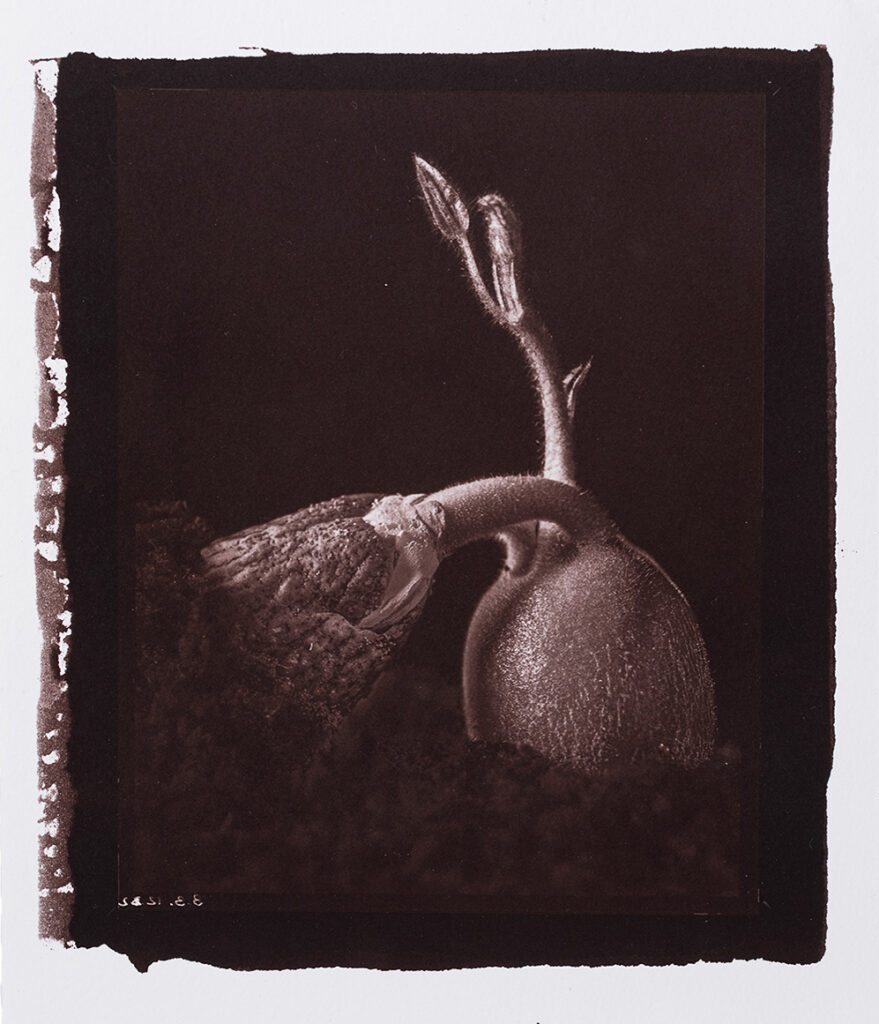 Adam Monohon writes about an artist who uses the ancient art of salt photography to capture today’s materiality.

Harkening back to the earliest days of photography’s history, Joachim Froese finds fertile ground for his latest project, Process, in the intertwined histories of photography and botany.  Comprised of careful, close-in views of an array of seedlings, Echoes of Process transports viewers to a time in photography’s history when the boundaries between art and science were less rigid than they are today. Through the reenactment of the pleasures and pursuits of the past,  Echoes of Process raises prescient questions about the perils of the present—and the realities of an ever-increasingly precarious future.

First photographed with a modern, digital camera Froese then prints the works in Echoes of Process using an antiquated, analog process: salted paper, a photographic printing process introduced in 1839. Rendered in soft tones, on hand-coated paper, the delicate beauty of these prints belie the force and depth of their meaning. Through this procedural sleight of hand, in which modern technology and one of the earliest photographic procedures work in tandem, Froese interposes an element of oscillation into these images, reminding us of photography’s constant wavering between art and science, and entangling technologies past and present.

Froese’s careful, typological documentation of each seedling calls to mind the conventions of botanical illustration, which strives to present in great detail the key characteristics of each specimen. They recall, as well, some of the earliest photographs ever made. Namely, images of plants produced by the Englishman William Henry Fox Talbot, an early experimenter with salted paper prints, which he described as photogenic drawings. An enthusiastic botanist, Talbot took plant cuttings as his subject from the very outset of his experiments with the nascent medium of photography – often drawing them from his own herbarium. Similarly, Froese himself cultivates the botanical specimens he photographs.  Through this investment in every stage of the process of producing each image in Process,  photography and botany are thoroughly enmeshed, blurring boundaries.

Implicit in Froese’s selection of which plant species to raise and document are the resounding echoes of processes of globalization that gained new vigour at the very moment of photography’s inception. While foreign species may have been curiosities in Talbot’s age,  today, the presence of non-native plants in any given locality is inescapable, a product of a  thoroughly interconnected world. Many of Froese’s images document foreign flora now commonly found in Australia, several categorized as invasive species for the threat they pose to native life. Froese also turns his lens towards vulnerable species, as well as sundry crops. 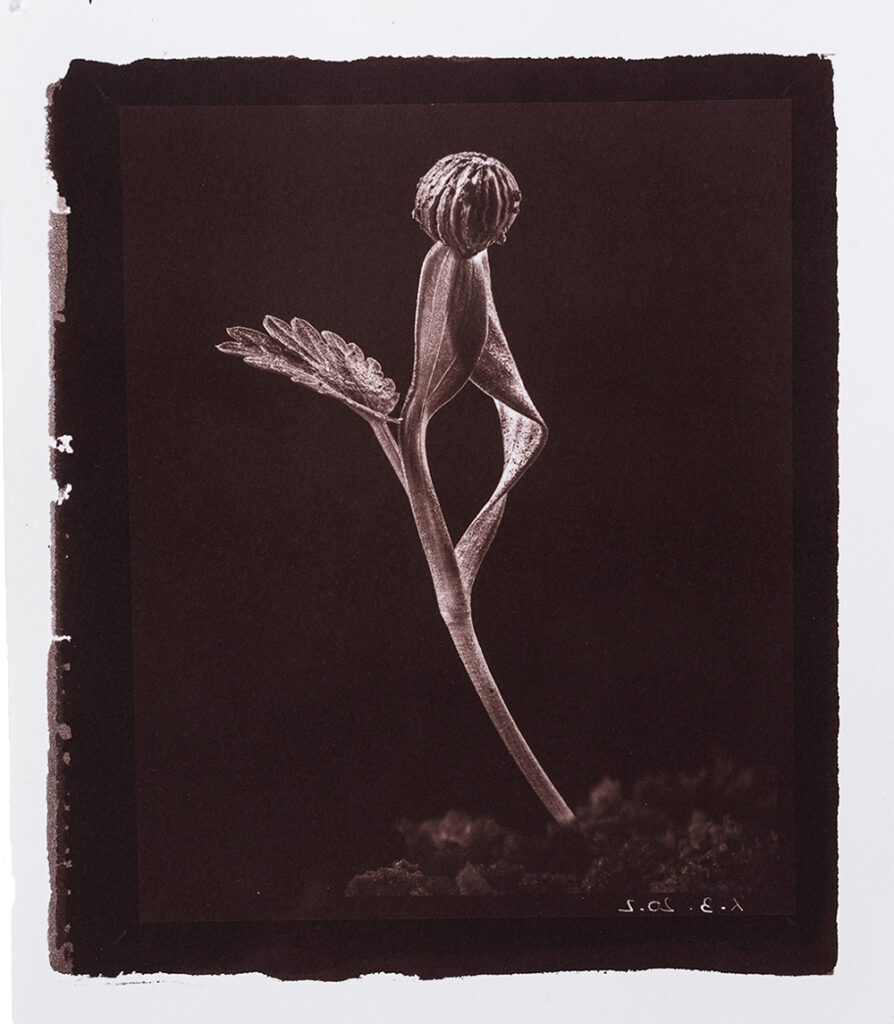 As one critic remarked of Talbot’s early images in the literary magazine the Athaneum in 1845,  “photography has already enabled us to hand down to future ages a picture of the sunshine of yesterday.” Froese’s images hold the same promise today. In the face of the massive ecological turmoil brought on by the accelerating climate change of the Anthropocene, these images function as a record for the future, just as much as they exist as art today.

The quiet urgency of the works in Echoes of Process find resonance in an untitled large-scale cyanotype work from the series Wollemi Giants, produced during Froese’srecent artist residency at BigCi in the Blue Mountains. It consists of 56 individual prints and is presented in the exhibition adjacent to the assembled waxed paper negatives that were used to print the work. This installation confronts the viewer with a charred tree stump in duplicate at life scale. Whereas the works in Echoes of Process depict the very beginnings of life this piece reflects on an end. In particular, the devastating losses exacted by the ever more frequent wildfires of our age.

For this work, too, Froese has employed a hybrid procedure, beginning with an oversized digital image file, itself a composite of sixty-seven digital captures, that is then fragmented again into the individual waxed negatives used to make the prints. Ordinarily a bright shade of blue, Froese has toned each cyanotype print in this work with a concentrated solution of green tea, precipitating a chemical reaction that results in crisp black-and-white images.

Froese’s extensive investigations into process (whether photographic, botanic, or climatic) collapses rigid distinctions (between historic and contemporary, analog and digital, art and science) and invites sustained engagement and careful contemplation on behalf of the viewer. These works act as a call to attention, as well, subtle reminders of the complexity and entanglement of an increasingly fragile world.

Adam Monohon is an independent scholar and Curator of Photography, previously Curatorial Assistant at the University of Arizona’s Centre for Creative Photography (CCP) as well as a Graduate Curatorial Intern in the Getty’s Department of Photographs.