Holding hands: Love in a time of social distancing 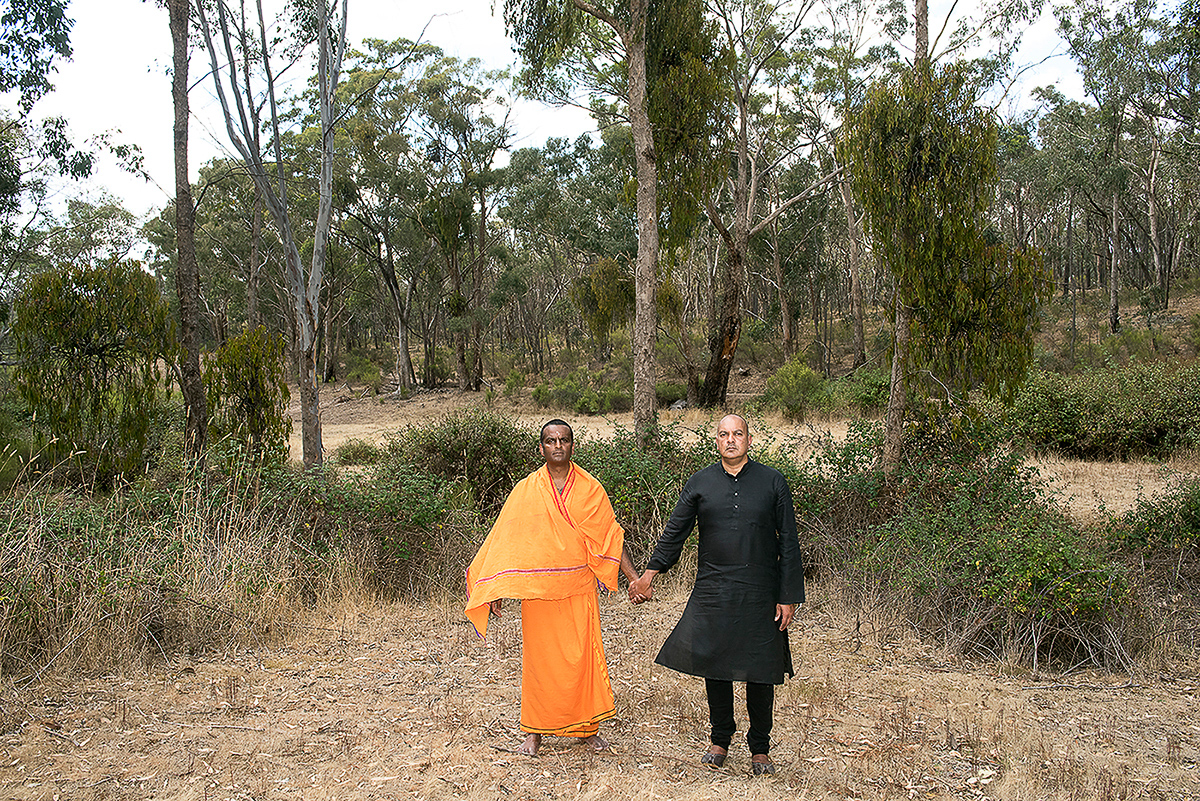 Rhett D’Costa makes a photograph that reflects on the status of hemiparasites and Indian same-sex love in the Australian bush.

I would like to start with a quote from Homi Bhabha from the Location of Culture (1994). It was written 24 years ago. Yet it still retains currency today. And was certainly deep in my psyche when I was developing this image.

Those of us who identify or are identified as ‘different’ – who are marginalized, ostracized, excluded, discriminated against, criticized, shunned, ignored, avoided, exiled or cast out, continue to employ strategies which places us at these interstices, so we cannot just re-vision histories and cultures through multiple lens which allow for more inclusive narratives – but act out these strategies often as forms of quiet resistance (Bhabha 1994).

I guess the questions I was asking when I was conceiving this image in 2018 included; When is the act of Holding Hands acceptable? Celebrated? Embraced? Tolerated? And conversely when is it not? When does this act shift from one of love to one of taboo? Or conversely from one of taboo to one of love? How can such a simple gesture be so nuanced and slippery in terms of how it is performed? And who is performing? And where is it being performed?

Holding hands can be a gesture of democracy. Two hands coming together to confirm unity. As a gesture it can be a stealth, the surreptitious brushing of two hands, a gentle clasping or a firm interlocking of fingers, or a warm embrace—palm touching palm.

Holding hands can signal a belief in freedom and equality between people regardless of culture, sexuality and class.  It can be a beautiful and powerful gesture. It can engender love, intimacy, the first signs of romance, desire and sexual yearnings. It can celebrate togetherness, a form of friendship and bonding. It can signify comradery and connectedness and mateship. It can build community often in times of hardship. It can encompass safety and assurance in times of danger. It can be gentle, innocent and comforting. Or it can denote power and be authoritarian. It can be a provocation of sort and as Bhabha describes, it can be ‘a form of quiet resistance. ‘

It was under these considerations that I developed Holding Hands (2018)

The photograph I constructed of two men holdings hands has been shown three times and in different contexts. It was exhibited as part of an installation titled, Becoming Differently which I showed at The Substation. It was subsequently also shown as a large billboard as part of a public project in the grounds of the entrance at The Incinerator Gallery in the Shire of Moonee Valley. And most recently it was part of a show titled Pleasure at RMIT Gallery.

The installation Becoming Differently alluded to identity as always in formation, and that these shifting forms can potentially differ to normative ways of thinking about identity.  It consisted of four parts; two photographs, an object, and an essay by cultural geographer Dr Lesley Instone, which weaves and links so eloquently, a narrative around the role of hemiparistic forms in the Victorian goldfields.

The installation was conceptualized based on a desire and two seemingly unrelated observations:

The desire was to cover the soles of a pair of Indian slippers I had bought in India with gold leaf from Australia. I wore these slippers back in India, where the friction of walking deposited fragments of gold on staircases and streets I walked on. At the same time dust, soil and other detritus lodged in the gold soles and were transported back to Australia. I subsequently developed a photograph from this performative action.

The first observation was the behaviour and characteristics of two indigenous plants, which grow where I live in the Goldfields National Park in Central Victoria, Dja Dja Wurrung country.

The second observation (and which led to making this image), occurred the first time I visited India since emigrating. I kept noticing that a lot of Indian men were holding hands in public – a gesture which caught me by surprise based on my own assumptions around public and private space regarding masculinity, intimacy and sexuality. At this time homosexuality was still a criminal offence in India. Homosexuality in India has been a contentious subject of discussion since ancient times.  Hindu texts have made reference to homosexual characters and themes which some scholars believe recognises homosexual dimensions of human life. Historical literary evidence indicates that homosexuality has been prevalent across the Indian subcontinent throughout history, and that homosexuals were not necessarily considered inferior in any way until about 18th century during British colonial rule.

In 2018, a 5-judge constitutional bench of  the Supreme of Court of India invalidated part of Section 377 of the Indian Penal Code (a law established during colonial rule) making homosexuality legal in India. Yet homosexuality is still very much a taboo subject in civil society. And subtle and overt forms of discrimination continue to persist.

On subsequent trips to India this gesture of men holding hands continued to intrigue me. I assumed these men were heterosexual and I assume it is still uncommon to see gay men in India hold hands in public as affirmative signs of their homosexual orientation.

The photograph which I am focusing on today, Holding Hands, has multiple narratives running parallel. Two Indian men, centrally positioned in the photograph, hold hands and look directly at the camera. The gesture is what it is—but what exactly it is remains elusive and is complex. This gesture has clearly been staged for the camera. So, in this context, the clasping of hands certainly implies a form of solidarity and even resistance.

When I first moved to the Dja Dja Wurrung region from Melbourne, I was very conscious that the majority of the community was Anglo Saxon. In fact, I only encountered one other Indian in the community. This was in stark contrast to Flemington were I lived previously, which was very multicultural.

In the photograph you can ascertain the ethnicity of the men as Indian based on the colour of their skin and their distinctive traditional dress codes; one a bright orange dhoti the other a black kurta top and pants. Each costume can be loosely attributed to religious groupings and customs. The dhoti is almost exclusively worn by Hindus, particularly in Southern India. The colour orange is often associated with religious Hindu men called Sadhus. The kurtha is also worn by Hindus, but is also worn by Muslim men, particularly in Northern India. Historically there have always been division across Hindu and Muslim religions, this continues today  creating tensions in Indian society. The man wearing the orange costume is Hindu and deeply religious. He comes from Brahmin caste and is very much connected to his community and family through caste, religion and language. This despite the fact that his family is split between domiciled Indians and migrant Indians in Australia. Personally he finds it very difficult to reconcile his relationship between his familial responsibilities as the only son in the family, and his sexuality. The other man in the photograph is also Indian, an Anglo-Indian. The Anglo-Indian community is legitimately recognized in India as a minority group. Its population is very small in the context of the large population of India. Anglo-Indians historically have a complex relationship to their culture. Caught between two cultures, Anglo-Indians have always had to assimilate between cultures as a negotiated way of being accepted. The Anglo-Indian in the photograph, because of his family privileging their British/European culture over their Indian ancestry, has had a displaced relationship to his sense of Indianness. This has been compounded by the fact that he has no claims to any Indian language or religion and is further complicated through the lens of migration. These men have spoken to each other confessing their cultural desires to be each other. The Anglo-Indian desiring the authenticity of his Indian friend. His Indian friend desiring the Anglo-Indian’s ability to assimilate to his multiple cultural influences without fixity. This gesture brings them together in this different geography. It acknowledges their shared vulnerabilities and solidarity in relation to how they on a daily basis navigate cultural, political and social norms and expectations.

The Australian landscape and its inhabitants, (both indigenous and white settler) is documented in art and history, if in a somewhat chequered way. What this image attempts to do is bring another discourse into the space of the Australian bush—that of the contemporary migrant, the Asian—Australian,  attempting to acknowledge their presence and validating their sense of belonging, on their terms, in their own dress codes and body language. The image should be plausible—yet it remains strange, as strange as images of early white settlers who attempted to bring (impose) Englishness, through dress codes (and other social behaviours and attitudes) to the Australian landscape.

Finally the discourse around hemiparasites, sheds light on the relationship of the mistletoe and dodder vine and indeed on parasitic forms which are often perceived as dangerous and negative, but which in fact challenge these assumptions asking us to consider instead, the ‘hospitality of provision’ and a shared sense of community and belonging.  Furthermore, it sets up a conversation between different cultural forms—the Indian men and Australian bush bits—both becoming differently and mutually constituting the space of inbetweenness.

The migrant is not a new image to the Australian landscape. The Victorian gold rush saw the largest migration of people of its time to this landscape. In these present times where right wing politics use migration debate as a political weapon and a divisive way to separate communities, the image of migrants needs to be seen as a way of claiming their right to belong and bringing forward ideas of cohabitation.

These are strange times indeed where pragmatic terms such as social distancing can take on more insidious and treacherous meanings, let’s ensure there that love is always present in the simple gesture of holding hands.

This paper was presented at the Uphaar: Craft of Love symposium at RMIT on 14 March 2020.

Rhett D’Costa is a lecturer at RMIT School of Art.