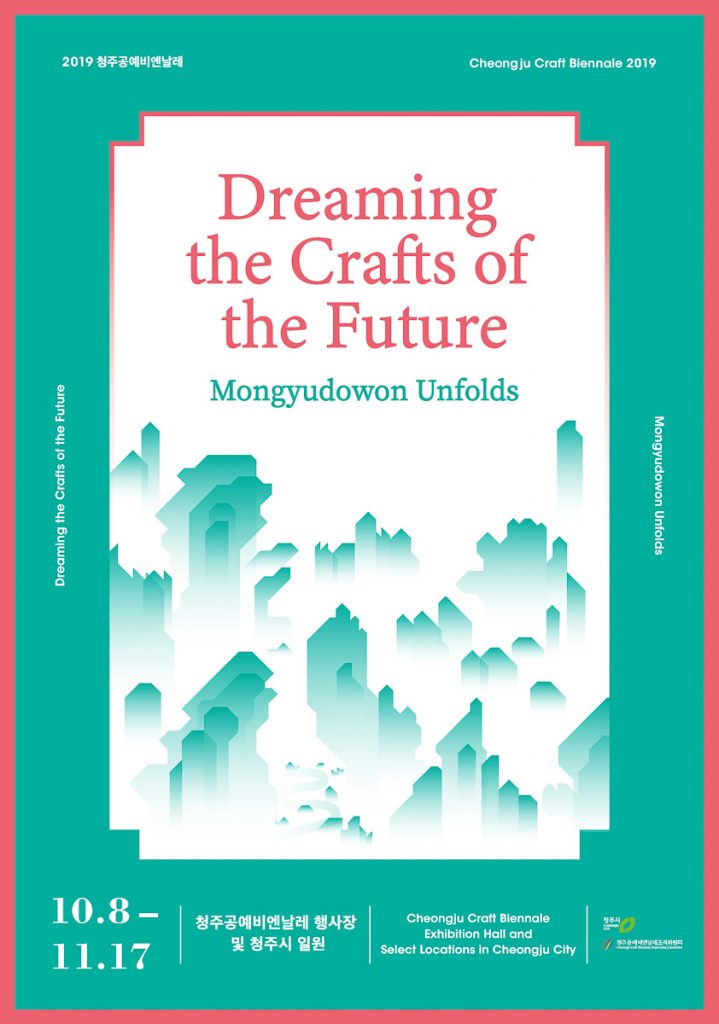 Epic craft festivals in East Asia often take on a utopian theme. This year’s Cheongju International Craft Biennale is called Mongyudowon, which is a mythical landscape of idealised and inaccessible beauty.

Mongyu-dowon-do is a fifteenth-century Korean painting by An Gyeon that depicts the landscape of Geumgang-san, Korea’s “Diamond Mountains”. It was produced during the Joseon Dynasty, which is commonly seen as the height of Korean classical culture. Mongyu-dowon-do is known as a Sanshin (mountain spirit) paintings. The alternative name for this painting is “Dream-Journey to the Immortal-Peach Orchard”. It evokes the Daoist belief in the God of Immortality, often realised through a mythical peach garden.

An example of the importance of this genre today is the choice of backdrop for the historic meeting between the two leaders of the Korean peninsula. The painting by Min Joun-ki was another contemporary version of the Mongyudowon.

The meaning of Mongyudowon itself is something specific to Korean culture. But it does resonate with the theme of Lost Garden which can be found in many of the stories shared so far on the Garland platform. This nostalgia is a powerful desire, particularly in a world of dizzying change. The challenge is to harness it as a positive creative energy that re-enchants the world around us. Next week we will see how the biennale meets this challenge.

Cheongju produces many memorable craft exhibitions, such as the recent exhibition of chopsticks. We wish Cheongju all the best in sharing this vision with the world.

Cheongju International Craft Biennale (8 October – 17 November 2019) is the world’s largest craft event. It boasts an annual participation of 3,000 artists from 60 countries. This year it celebrates its 20th anniversary. It is well worth a visit, otherwise the best place to follow it is on Facebook.

Winners of the 9th Gyeonggi International Ceramic Biennale 2017
When do stories become designs?
Will your country be part of the world's biggest craft biennale?
Greening Delhi: An interview with Ranjit Sabikhi
The enduring appeal of k-craft
Jin ah Jo ✿ A pipeline to Buddha 🇰🇷
Korean Craft Trend Fair - 7-10 December
Why do Koreans use metal chopsticks?