A new garland for Fiji 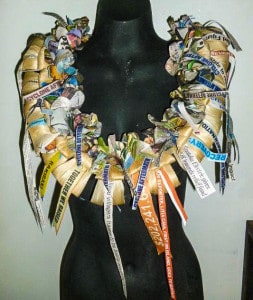 The garland as a symbol of welcome is particularly strong in the Pacific. The role of the broader Pacific community is especially important when someone is devastated by a natural tragedy, as occurred with Cyclone Winston on 14 February 2016. It’s natural that we turn to the garland as a source of support at this time.

This is a statement by Johanna Beasley (Visual Arts Coordinator at the Oceania Centre for Arts, Culture and Pacific Studies, Suva, Fiji):

The day after the cyclone the silence was frightening.

The wind no longer howled and it seemed the world had a curfew, not just Suva.

I was fortunate I had a roof over my head .

My garden was scattered with debris and there was a tree lying over my power line .All power lines had been disconnected as a safety measure when the cyclone hit.

I was fortunate unlike so many other islanders and locals who had felt the full brunt of Winston.

I made several artworks then I decided I would make a traditional salusalu .

I decided to use cuttings from the local papers to replace the usual flowers.

The making of this salusalu was a very cathartic process, and helped me process my experience as single person living through what had been a cyclone unlike any that had come to Fiji .Certainly a night I will not forget.

See Tessa Miller’s contribution to the Second Home exhibition for information about how you can support the reconstruction effort in Fiji.

How to make a life out of lei-making: Lauren Shearer
COVID: An opportunity for the handicraft sector in the long run?
New Spring, Old Gods: Adornment for the people of the bear
Art for life ✿ The hanging garlands of Pompeii according to Dylan Rogers
Isolation jewels: A well-made life
Eddy Carroll ✿ A marigold journey
Chiharu Shiota ✿ The Soul Trembles Ruptures Realities
Happy Vasant Panchami