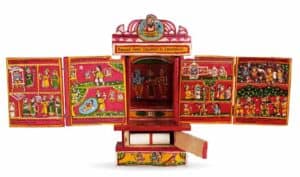 A contemporary kaavad designed by Ishan Khosla in collaboration with Mangi Lal, Udaipur.

The December issue of Garland includes a focus on India, particularly its western region including Mumbai and Gujarat. The theme is about the role of objects in telling stories. India has a rich tradition of crafts that involve oral storytelling. This includes the kaavad, a cabinet of many doors used to recount Hindu epics to communities dispersed through Rajasthan. Such objects are useful props for fixing the attention an audience.

In world history, oral performance has competed with the book for the dominant role in telling our stories. But digital technologies now provide an increasingly attractive alternative to the book, not only in e-books but also the stream of social media that competes for our downtime.

This development raises the question of where to accommodate stories. We often treasure keepsakes because they house memories of important people or places. The conversation piece is a common prop for travellers’ tales. And in the case of the heirloom, we have an object whose story is ongoing, in the thread that connects future generations. But by far the most common place for stories has been in books, which we keep on our shelves long after they have been read as placeholders for the mark they have left in our imaginations. As books recede in importance, will objects play an increasingly important role as places to keep our stories?

Again, India is the site of great innovation in the technology of storytelling. Many enterprising Indians have returned from the USA with new digital skills which they have used to develop e-commerce platforms for craft. More and more, these sites feature the story of the artisan—not just a name or smiling face, but a biography and even personal philosophy. As is well known by tour guides, learning the story behind a handmade object increases its value.

So the December Garland will explore both new and traditional ways of telling stories through objects. To accompany this, we invite images from artists of objects they have made that tell stories. As previously, we will include a selection of these with the next issue and promote them through our social media. This is a good opportunity to expose your work and reflect on what’s being made today.

Images are due 21 November 2016. You can submit 1-3 images. Images should be at least 1200 pixels wide and be accompanied by their story.  Submit information here and upload images here.

A map for the embroidered garden
Rahul Kumar ✿ Ceramic art and science
David Escalona ✿ Life under wraps
Pamela Leung’s Red Line Story
In the Future, They Ate From the Finest Porcelain
In font we trust - Bangalore Mirror
Rajan Vankar ✿ A lifelong love for the loom
Dias Prabu ✿ Re-imagining memories of past encounters