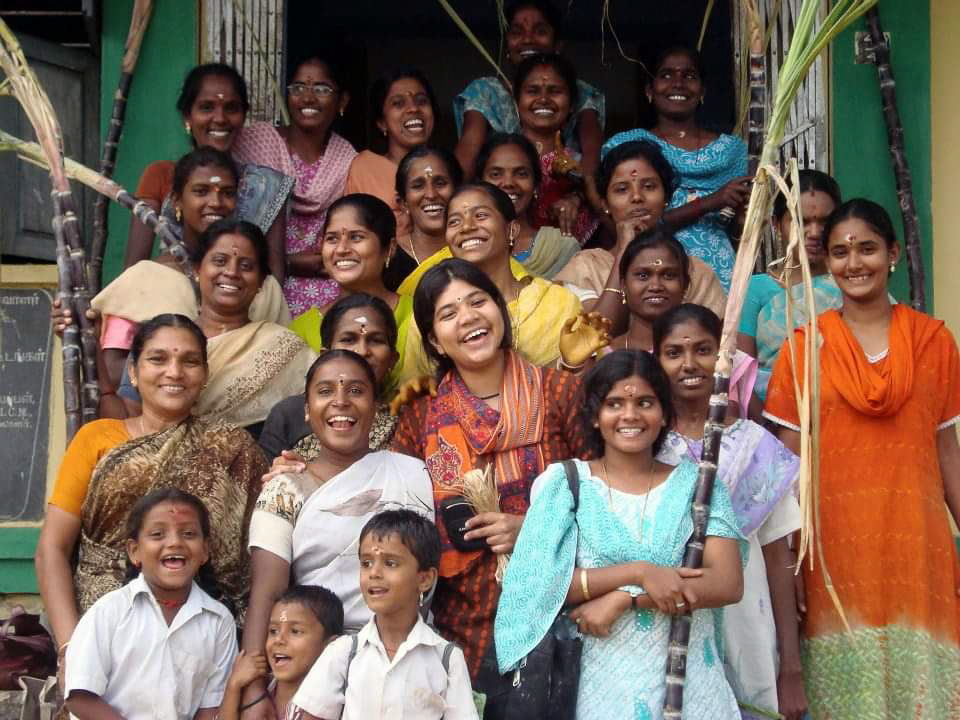 Khushbu Mathur shares her knowledge of the joyous harvest festivals happening across India in mid-January.

Festivals in India are an opportunity for people to celebrate the vibrant culture and age-old traditions, which have been passed on harmoniously from generations.

Makar Sakranti holds different historical importance and is celebrated with different names in different states on 14th January of every year, marking the arrival of spring.

The festival marks the transition of the sun into the Makara Rashi (which is the zodiac sign of Capricorn). Capricorn is the sign of Saturn (shani); the sun on this day enters the sigh of Saturn. The sun is the father of Saturn and as per Hindu mythology, father (sun) and son (shani) don’t get along well. But on this day, the father goes to meet his son. Both Saturn and Sun are mighty planets whose auspicious blessings can make humans achieve great success. Hence on this day, people pray to both sun and Saturn.

According to mythology, Sankranti is deemed a Deity who killed a devil named Sankarasur. It is also celebrated as a triumph over evil.

Makar Sankranti’s themes are blessings, offering, mediation, earth, sun, thankfulness, love, passion and abundance. To Hindus, the sun stands for knowledge, spiritual light and wisdom. The festival signifies that we should turn away from the darkness of delusion in which we live and begin to joyously let the light within us shine bright. We should grow in purity, wisdom and knowledge just as the sun does from this day. Sun stands for all ideals; its message is that of light, unity, equality and true selflessness. If we learn this one lesson from the sun, our lives will shine with the divine lustre.

In quite a few states in India, Makar Sankranti is considered as a major harvest festival. Some build bonfires, some make sweets, some go to the Ganges and some feed the cattle.

On this day, Punjab celebrates it as Lohri, Bihar and Jharkhand as Sakraat, Andra Pradesh as Bhogi and Sakranti, Gujrat as Uttrayan, Rajasthan & Maharastra as Makar Sakranti, Tamil Nadu – Pongal, West Bengal – Poush Parbon, Uttar Pradesh – Khicheri and Assam – Magh Bihu. Not just in India, it is celebrated in Nepal as Maghe Sankranti, in Myanmar as Thingyan, in Cambodia as Moha Sagkran, and in Sri lanka as Uzhavar Pongal. 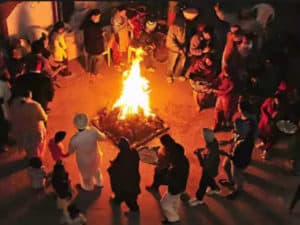 Lohri, the bonfire harvest festival of Punjab is associated with the harvest of Rabi crop. This is the time to sow sugarcane crop, which is harvested between December and March. Sugarcane products such as gur and gajak are an important part of lohri. Friends and relatives gather around the fire and perform Gidda and Bhangra to the beat of Dhol, the drums of Punjab. The first Lohri of a bride and a newborn are especially celebrated with pomp and grandeur. On the morning of Lohri, enthusiastic children dressed in new clothes arrive at the neighbourhood doors singing praise songs on Dulha Bhatti (a legendary Punjabi rebel, like Robin Hood, who led protests against the powerful Mughal emperor Akbar) and asking for generous Lohri “loot” in the form of money and delicacies such as sesame seeds (til) ladoos, peanuts, jaggery, and traditional sweetmeats like rewri, gajak etc. 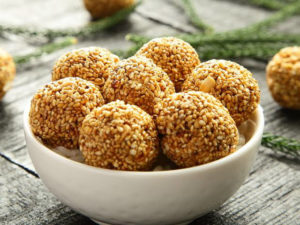 On Makar Sakranti, sesame sweets play a significant role in this festival. Sesame seed sweets have the ability to absorb and emit high amounts of sattva frequencies. Sattva is the quality of balance, harmony, goodness, purity, universalizing, holistic, constructive, creative, building, positive attitude, luminous, serenity, being-ness, peaceful, virtuous. By consuming seed sweets, inner purification happens. It is believed that by distributing these sweets to each other, there is an exchange of spirituality. People donate sesame sweets, blankets, woollen clothes, etc. 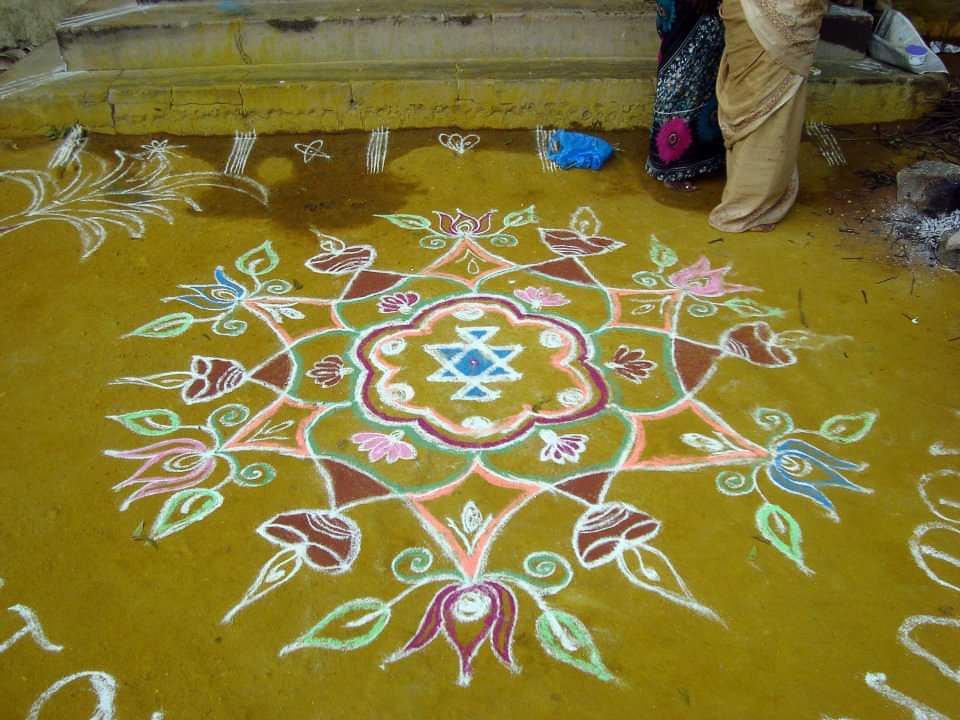 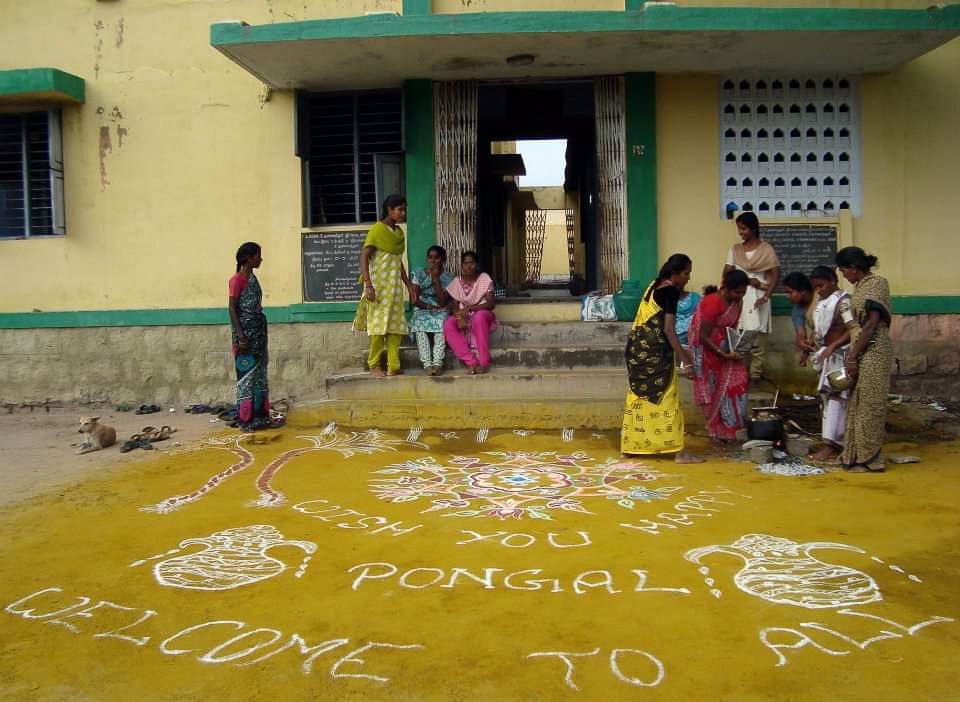 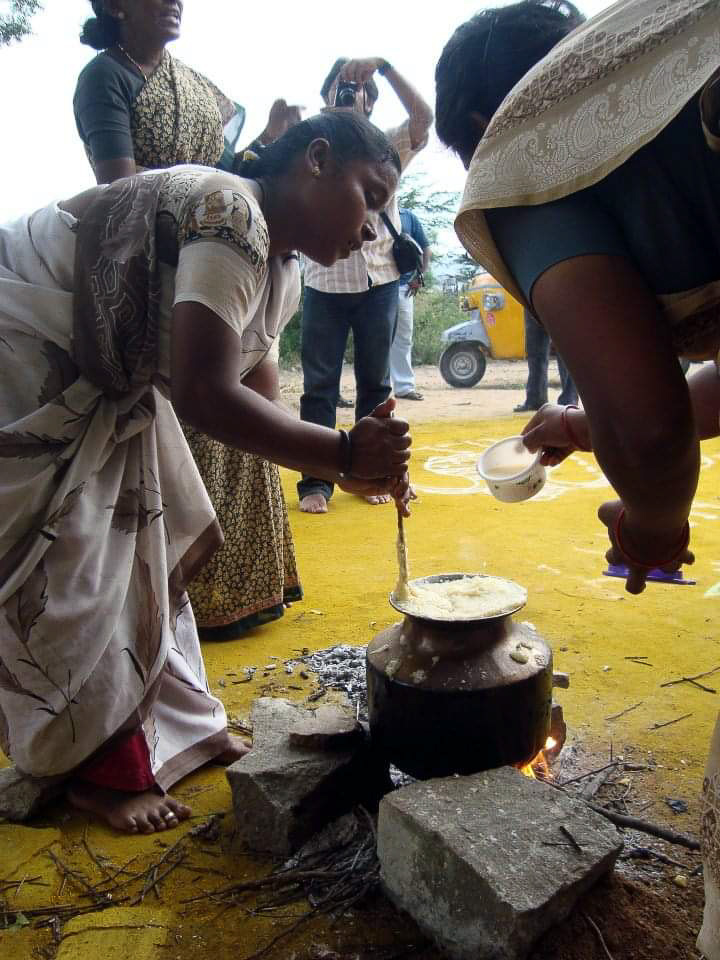 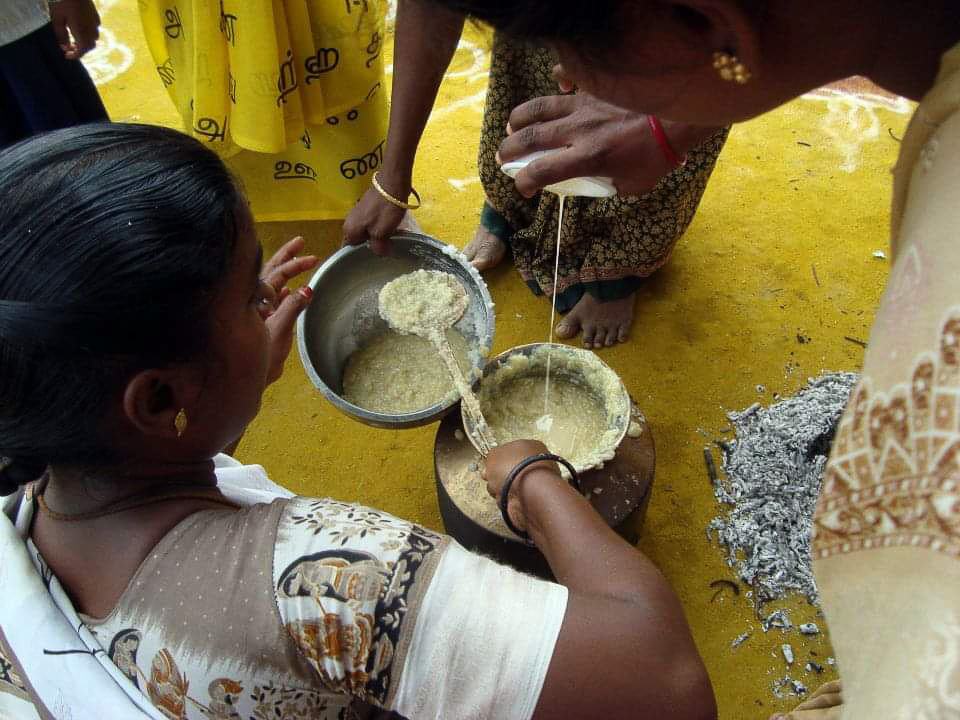 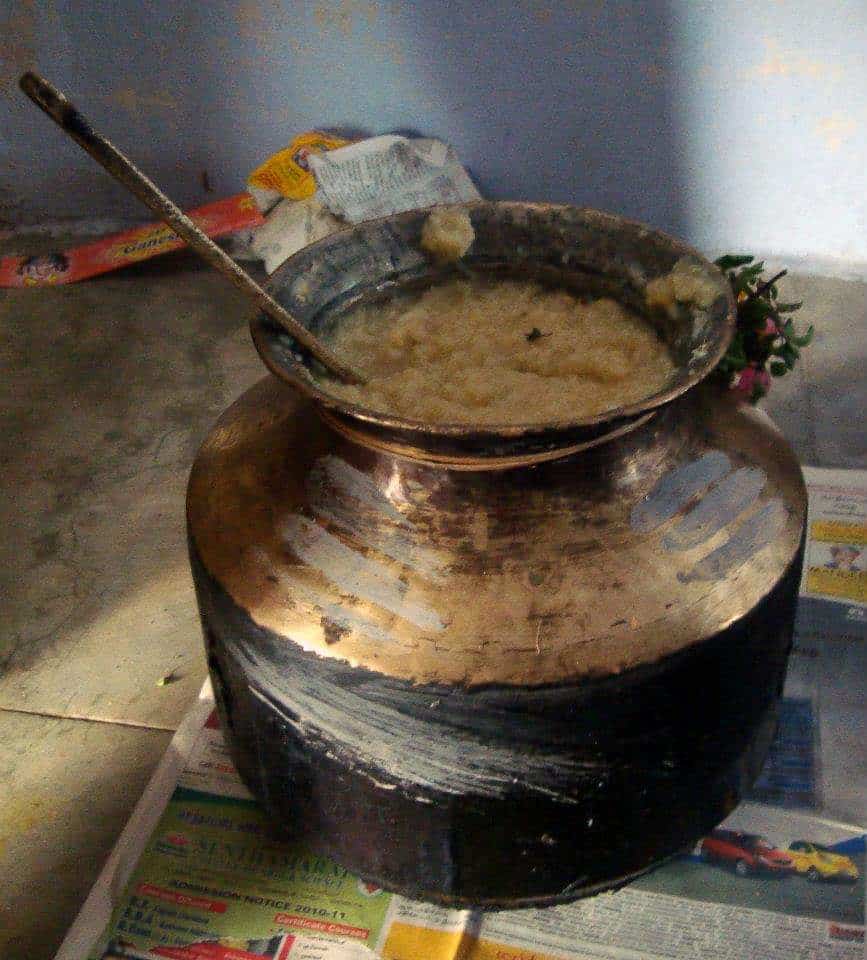 Pongal is a four-day-long harvest festival celebrated in Tamil Nadu when crops like rice, sugarcane, turmeric etc. are harvested. The term Pongal in Tamil means “to boil”, and this festival is celebrated as a thanksgiving ceremony for the year’s harvest. On Thai Pongal, a special ritual is performed where rice and milk are boiled together in an earthen pot, to which a turmeric plant is tied, out in the open as an offering to the sun god. Along with this, sticks of sugarcane, coconuts and bananas are also offered.

Another important aspect of this day is the kolam, the traditional design hand-drawn at the entrance of houses with lime powder. This auspicious drawing must be done early in the morning and only after a bath. 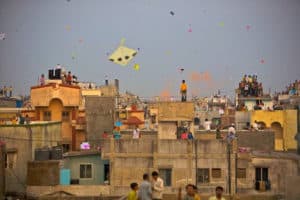 Flying Kites is a traditional game played on the festival of Sankranti (Makar Sankranti) in some regions like Gujrat and Rajasthan. Families have fun together. The joy of flying kites and cutting the strings of other kites is unmatched while the air is euphoric. It is the only festival when if you are ringing the doorbell of the house then you will be invited to the terrace of the house directly. Loud music with top trending songs can be heard since morning. After cutting the kite, the groups loudly say in chorus, “Wo Kaatey” or “Kai Po Che”, etc. Children have the charm to collect the kites that fall in the premises. The kites are hand-made. The paper used is best suited for the purpose of flying and also ensures durability. The charkhi (spool) is made of wood. Long yards of strong cotton thread accompanies the set.

Many consider flying kites high up into the sky as a form of thanksgiving to the gods.

When there's nowhere left to turn: The need to support Indian village crafts
Maggie Baxter ✿ Peeling walls and tattered ledgers
Mata ni Pachedi: Sacred textiles come to the rescue
It began with the daughter-in-law ✿ The story of Bhujodi weavers on 29 May
The Princess & the Bael Fruit ✿ A unique encounter with Warli art on 24 October
Rites to Writing ✿ Ishan Khosla links craft and graphic design
Asif Shaikh and Aziz Murtazaev ✿ A dialogue of print and stitch
Turkey Red on India Street