Castlemaine Currency: Towards a grounded economy 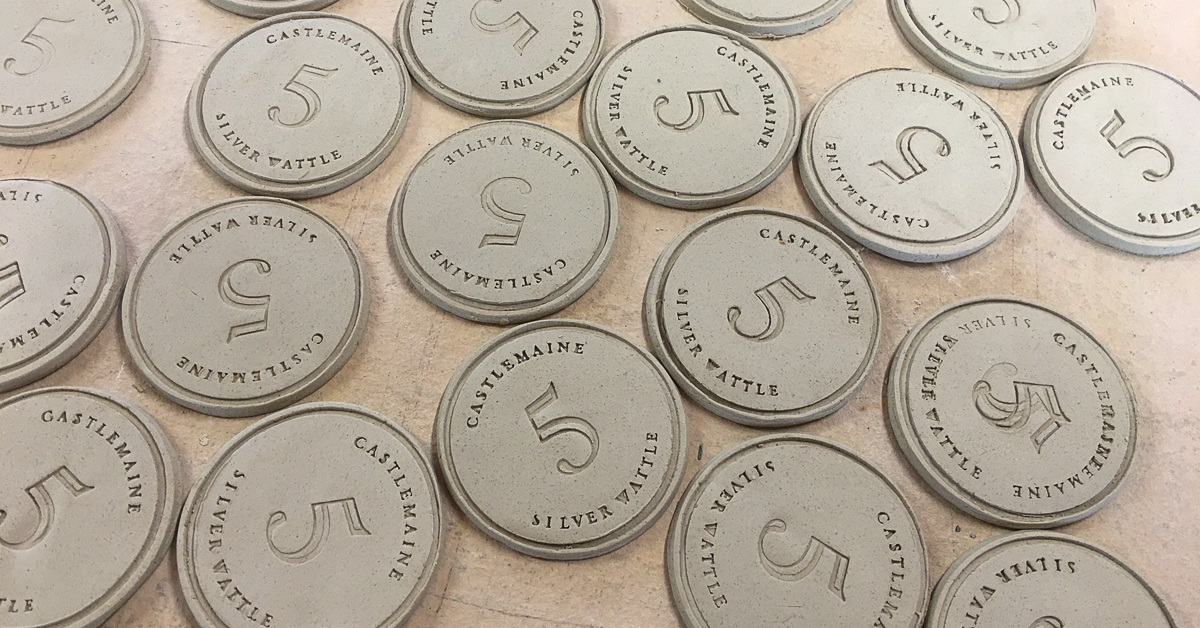 Dale Cox and Jodi Newcombe explain the origins and aims of producing coinage from clay for exclusive use within the town of Castlemaine.

Our Love and Money issue featured many inspiring initiatives from the maker community in the Victorian town of Castlemaine. The latest of these is the Castlemaine Currency Project, which further demonstrates the power of craft as a currency for re-balancing our world, in particular valuing the care economy that underpins our social order. We speak with two of the locals behind this initiative.

✿ What prompted the idea of the Castlemaine Currency Project?

It’s often hard to pinpoint the exact point of inspiration for an idea or project. It often emerges from multiple sources and conversations, the ether or zeitgeist; an idea whose time has come. In 2019 Castlemaine hosted a seminal conference called Local Lives Global Matters and the UK town of Totnes was featured in one seminar, in particular its local currency. This was one of many “Transition Town” initiatives designed to address the twin ecological and economic crises of our time. Local currencies have a rich and varied history and inspiring examples are currently used in many parts of the world, particularly the United Kingdom and Latin America.

Years later, we watched Tomorrow a film spanning global action on climate change, and there was Totnes again speaking about its currency in an inspiring way, comparing economic diversity to biological diversity and pointing to the hazards of a monoculture (in this case the global financial system). Jodi (who is an economist and creative producer) had started founding a local think tank for regenerative futures, the Castlemaine Institute, with economist Warwick Smith and others. Through their work on our Shire’s response to the climate emergency, Warwick produced a vision of a future economy: the Wararack 2040 vision. A local currency featured in this vision as the vehicle that drove many of the shifts towards a thriving, future. About the same time, we hosted a “Currency Dinner” bringing together local artists, activists and thinkers around the question of whether an art project could catalyse the emergence of a local currency—or at least test the value of the idea. Here’s a quote from the blog Jodi penned from the Currency Dinner:

“What if money was created, not by banks in exchange for debt, but by communities in exchange for good deeds? Imagine if we had a monetary system that created, not scarcity, but abundance. One that was designed to offer security for the most vulnerable in our society, rather than preying upon them. One that celebrated the uniqueness of a particular people and place, and supported a shared community vision for economic resilience, security and thriving; rather than exploiting and exporting local sources of wealth to feed a global network of corporate elites.”

Castlemaine is uniquely placed to explore the possibilities of a local currency. The township only really exists at all due to the discovery of gold in the 1850s. Its rapid beginnings required and enabled a robust and enterprising local economy to emerge. However, once the local gold mining industry and its extraction economy was largely exhausted, the township has had to find renewed ways of being and survives as a place of reinvention and innovation to this day.

Castlemaine’s history as a gold mining town is potent for this project and points to the unique potential of this place to deliver an alternative to the extractive economy. The local LETS scheme (a Local exchange trading scheme (LETS) is a local community-based network in which people exchange goods and services with minimal use of money) is an example of that spirit’s emergence and an important stakeholder in this work. Castlemaine’s standing as a diverse creative community is another part of the unique essence of this place which feeds into the story of the currency project and why it has potency.

The Castlemaine Currency Project is nested within a broader range of initiatives conceived to foster local resilience along with the principles of the “circular economy”. The project is a collaboration with local potter Ann Ferguson, Dale Cox and creative producer/economist Jodi Newcombe of Carbon Arts (an organisation exploring ways for art to catalyse a culture of environmental stewardship) and of the Castlemaine Institute, a local knowledge hub for regenerative futures.

The project aims to cross-pollinate between the artistic/cultural and the economic/financial fields with the aim of charting a critical path towards a local system of exchange that radically reinvents our economy: one that is based on shared values and history, connection to country and resilience in the age of the climate emergency.

The Castlemaine Currency Project is two projects operating in parallel. The economic one explores the nuts and bolts of how a local currency could actually work. And the artistic one asks the questions and offers a broad range of provocations. Both sides of the same coin. They feed each other and seek to engage the public and stakeholders together in iterative loops of conversation and experimentation.

The art project provides the cultural framing and frames the conversation, offering a platform for public participation, a safe space for experimentation and gaming, the vehicle for education, and produces an object with inherent cultural value. 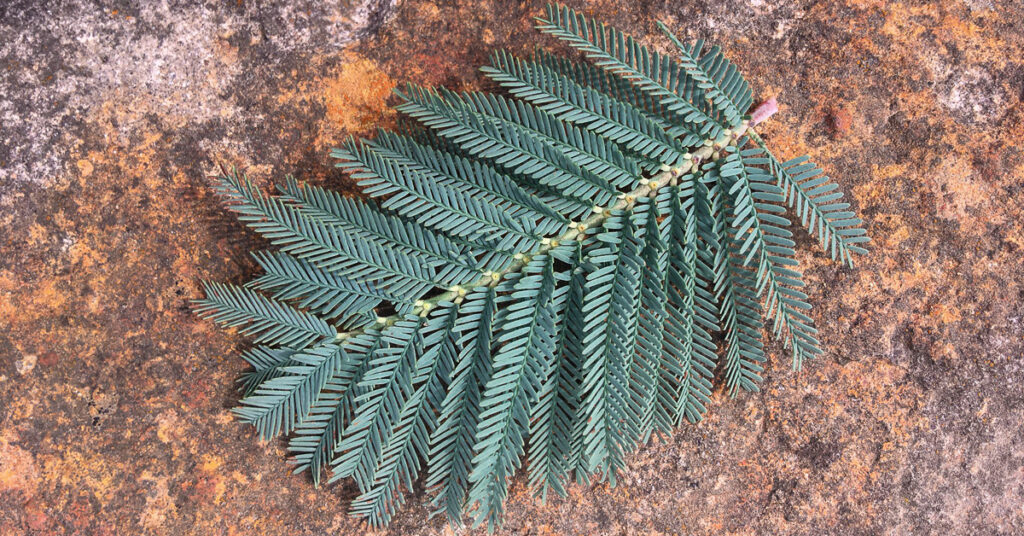 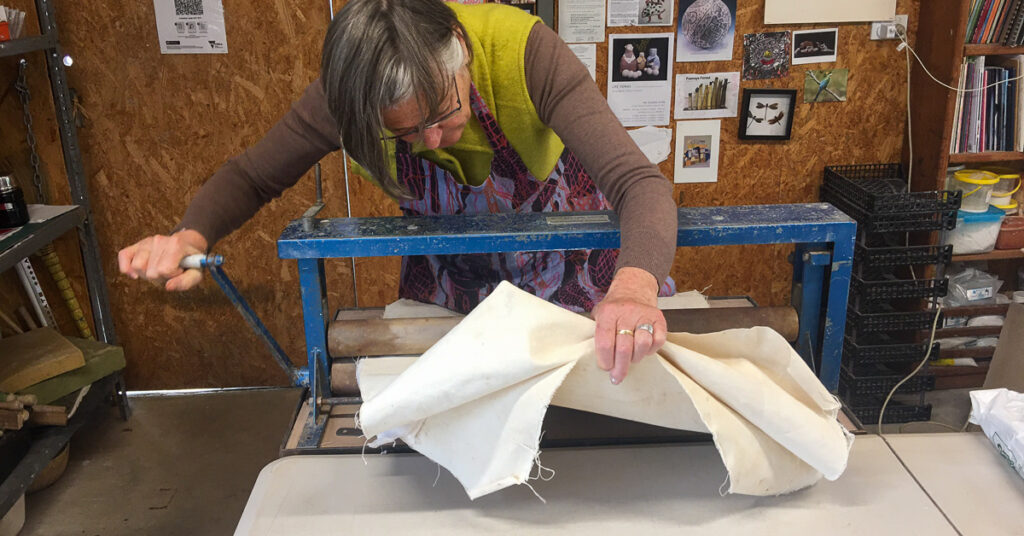 Ann Ferguson, rolling out the clay 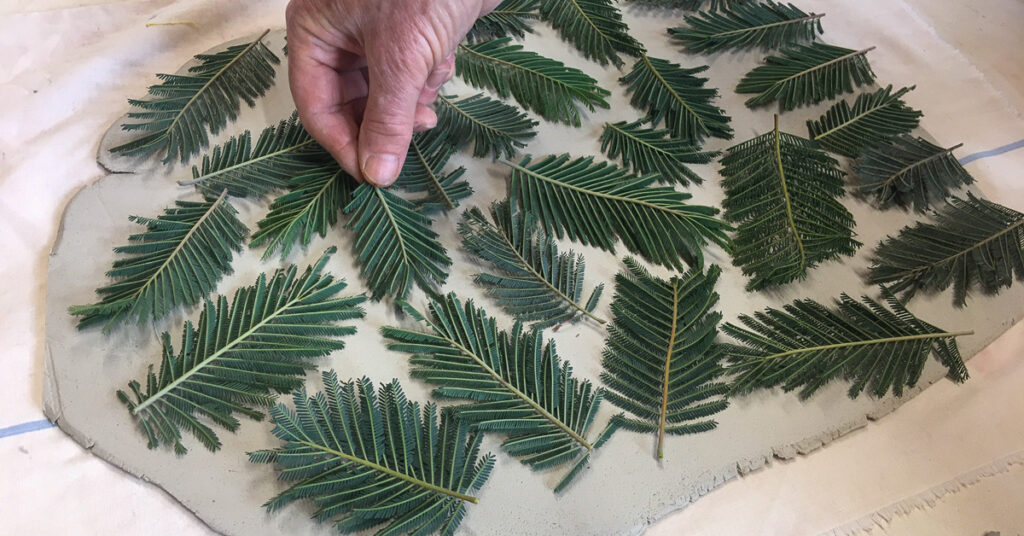 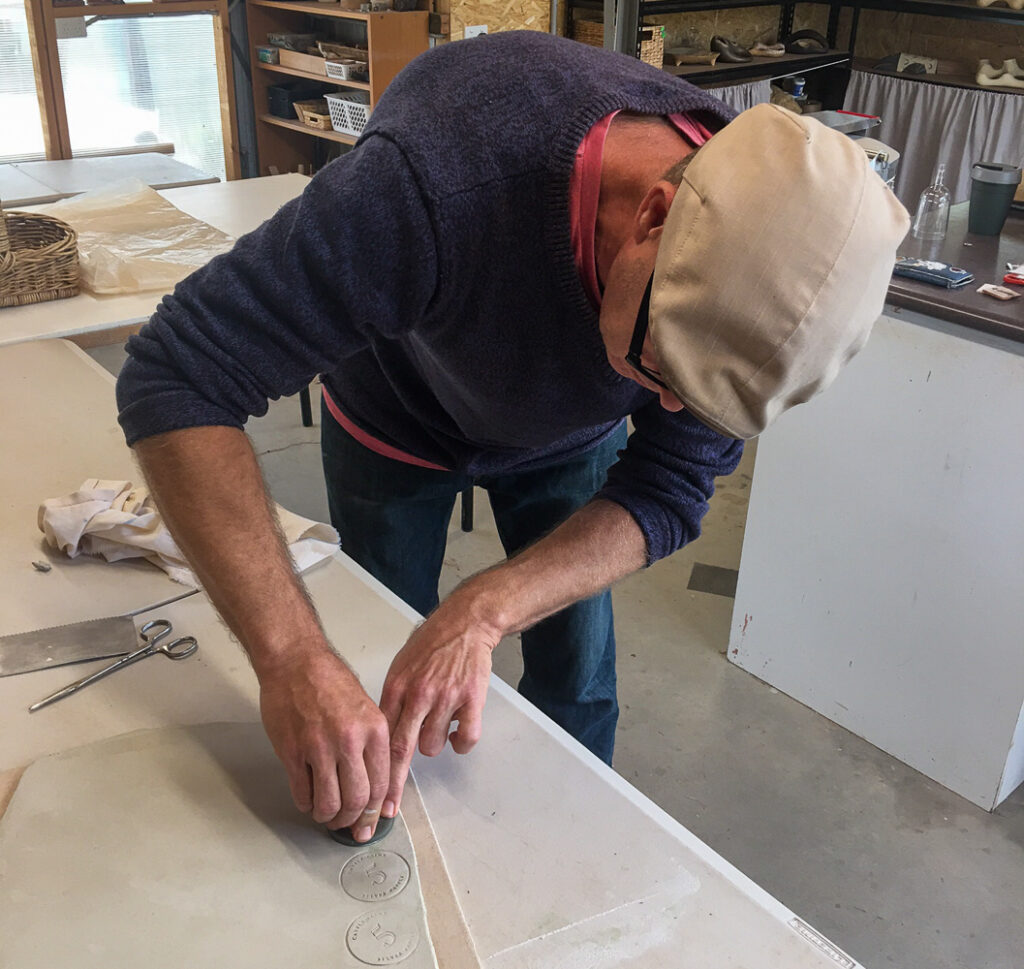 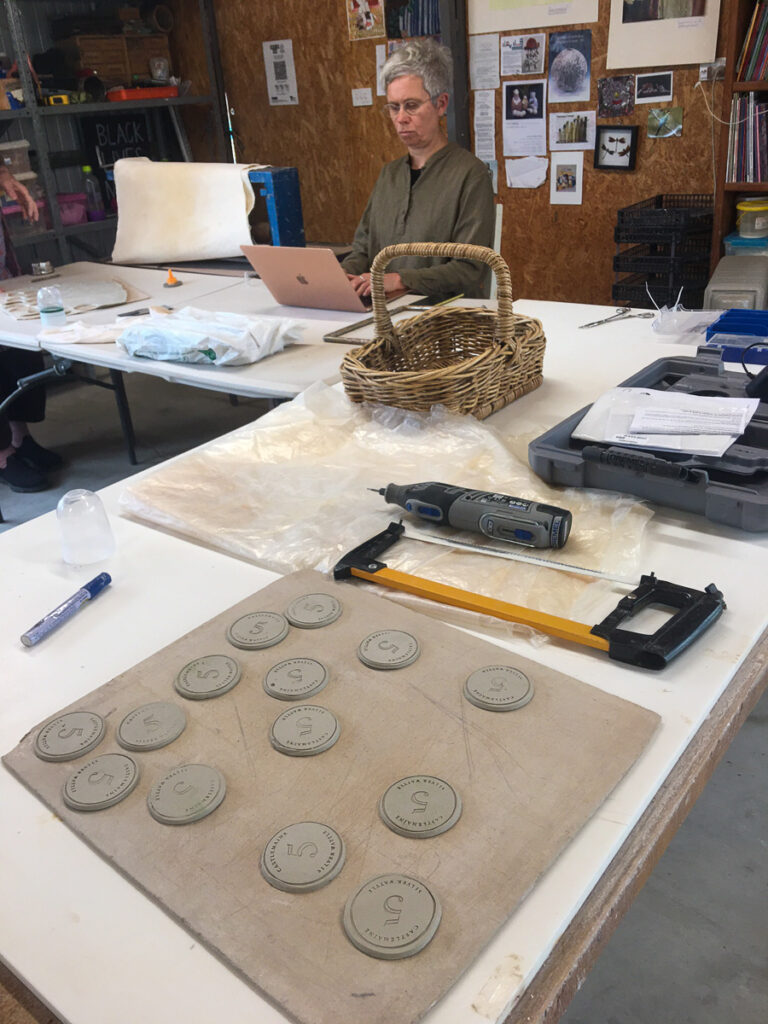 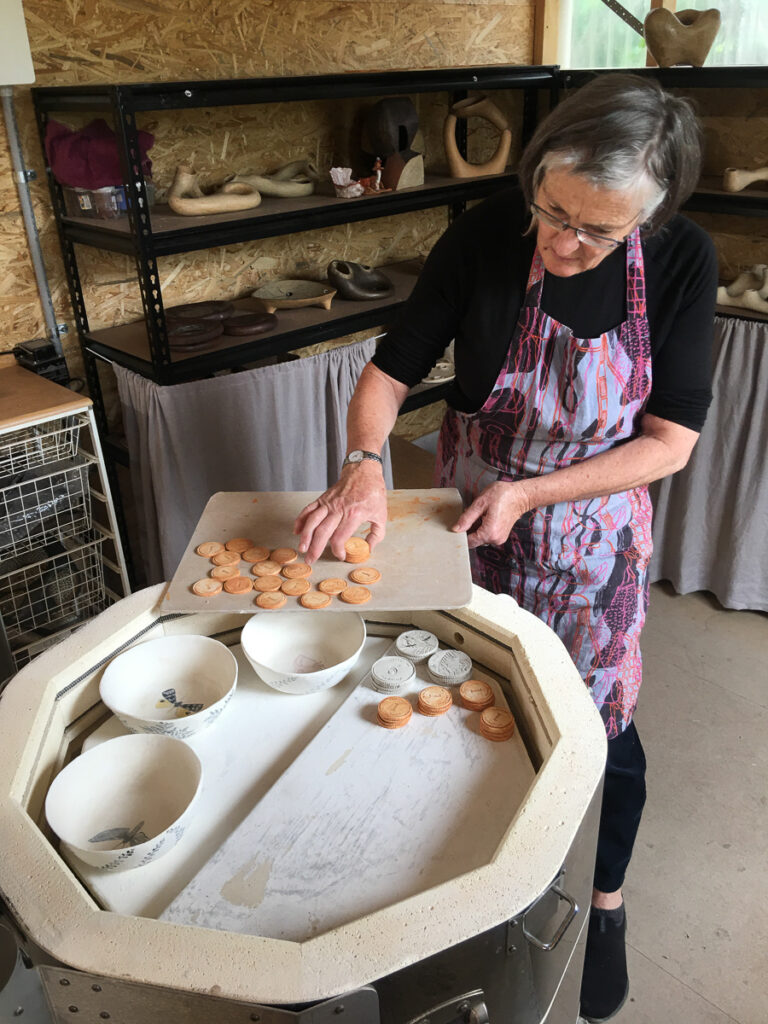 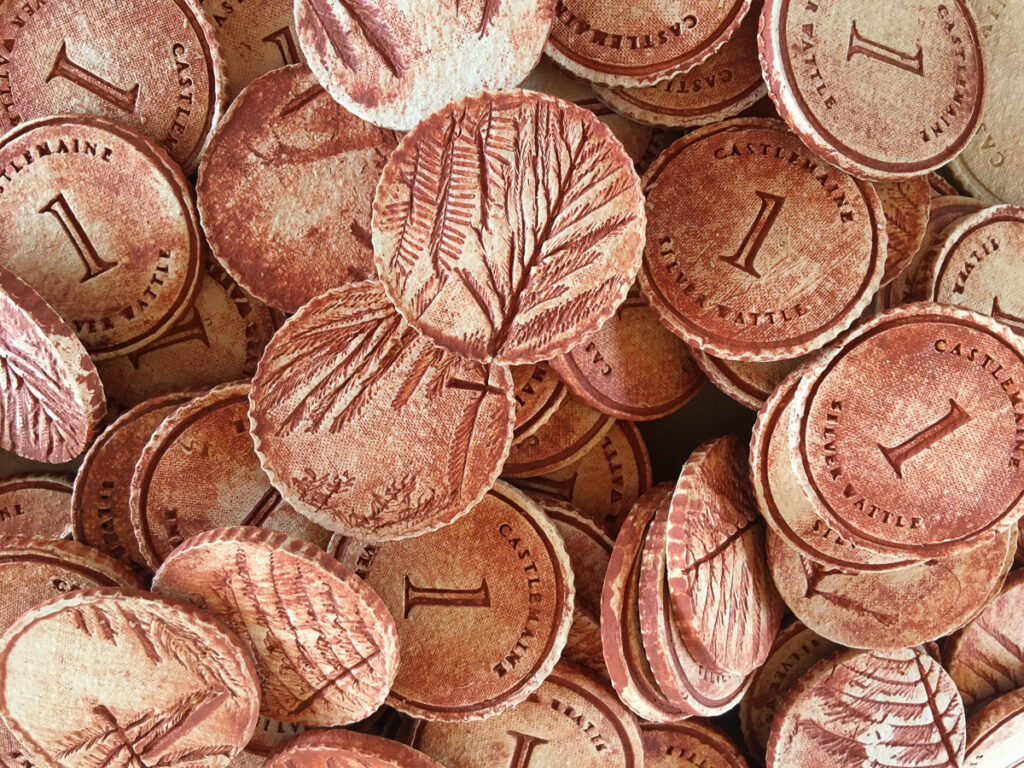 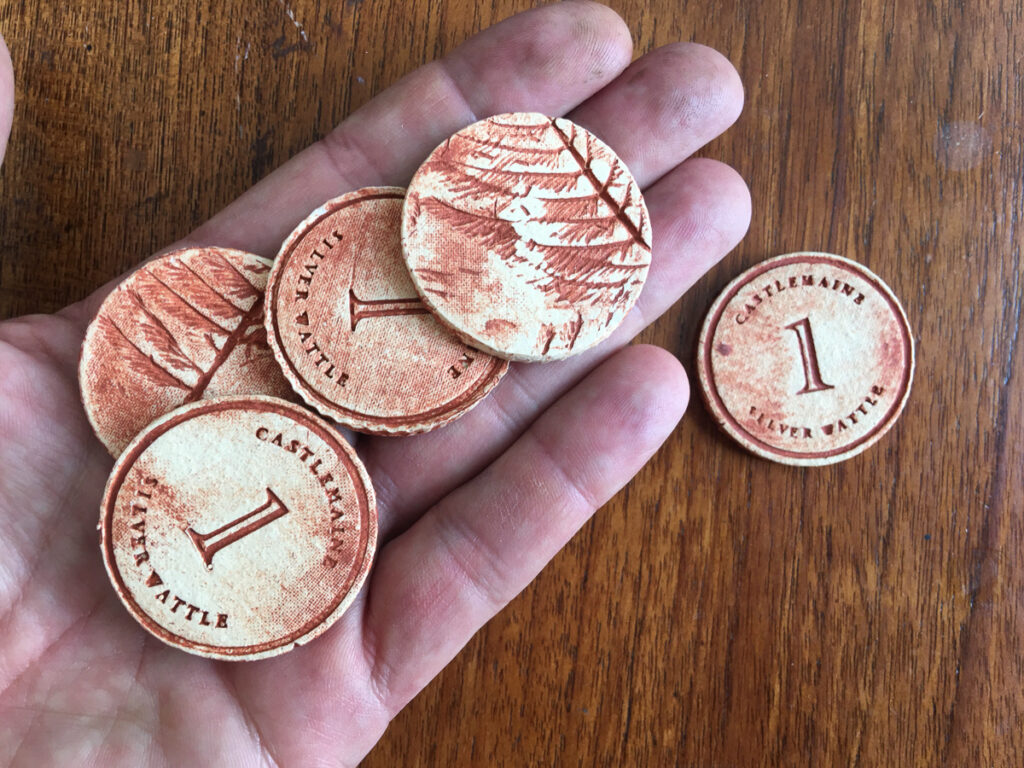 ✿ What is the actual currency and how will it be produced?

We arrived at the idea of using clay, a kaolin or “China” clay which fires to a high temperature becoming highly vitreous and surprisingly hard-wearing. A “wash” of a locally sourced terracotta clay is then applied to the surface after an initial firing which accentuates the impressed aspects of the coin. The use of clay is a deliberate subversion of the conventional metal alloy currencies as it invites us to imagine the Earth itself, the very ground beneath our feet as being the true source of wealth and where might find ultimate or “true” value.

Upon the clay coins, an impression is made from actual leaves of the Silver Wattle, Acacia dealbata or Wararack in the local Dja Dja Wurrung language. This is an important endemic plant to First Nations people as the sap is used as a binding agent as well as many other uses, including the seeds harvested and eaten, its ceremonial use for welcome to country, etc. The obverse side of the coin carries impressed lettering denominating the coin as Castlemaine Currency. A 3D printed die is used to impress the obverse side of the coin.

These “local” aspects are symbolically important to the concept of a local currency which can only be traded here in Castlemaine, supporting local businesses, services and individuals, building upon and helping to sustain a resilient local economy.

✿ What is the value of the currency and how is it set?

At this stage, two denominations have been produced: the One Silver Wattle and Five Silver Wattle Coin. A corresponding value is set at Ten and Fifty Australian Dollars accordingly. We thought it important to “peg” the value of the coins to our existing currency to enable an equivalence and therefore a tangible value for trade.

✿ What kinds of services will accept the currency? Do you have any lined up yet?

The currency is an experiment. We are looking to engage a range of businesses and ask two questions: would they be willing to accept the currency and would they be interested in offering a good or service that can only be purchased with the currency. Early responses have been very positive. A local cheesemaker immediately suggested that their “silver wattle” cheese be a perfect candidate!

There’s a flip side to this too. The currency can also be earned. Ideally, it is available to those who contribute to the “care economy”. The hand-making of the coin itself and the care taken by artists to make each coin a beautiful object, imbued with poetry, story and meaning, marks the beginning of this process. Its means of production stands in stark contrast to that of the almighty dollar, which is these days produced out of thin air on a computer: it has no tangibility.

The currency rewards careworkers: those who work thanklessly, even voluntarily, looking after our young and old, our sick, those who plant trees, restore our forests and waterways, who build up neighbourhood resilience. These are the “jobs” that the currency should support. We have toyed with the idea of giving the currency away, which amounts to businesses offering charity. Alternatively, a portion of each coin’s value is a contribution to these caregiving community groups, creating a relationship of exchange between businesses and the communities that support them.

We are looking at only inviting businesses that are part of the circular economy that already embody the principles of no waste and regenerative ways of operating. This way the currency’s ability to make visible the good work of our business sector is enhanced. 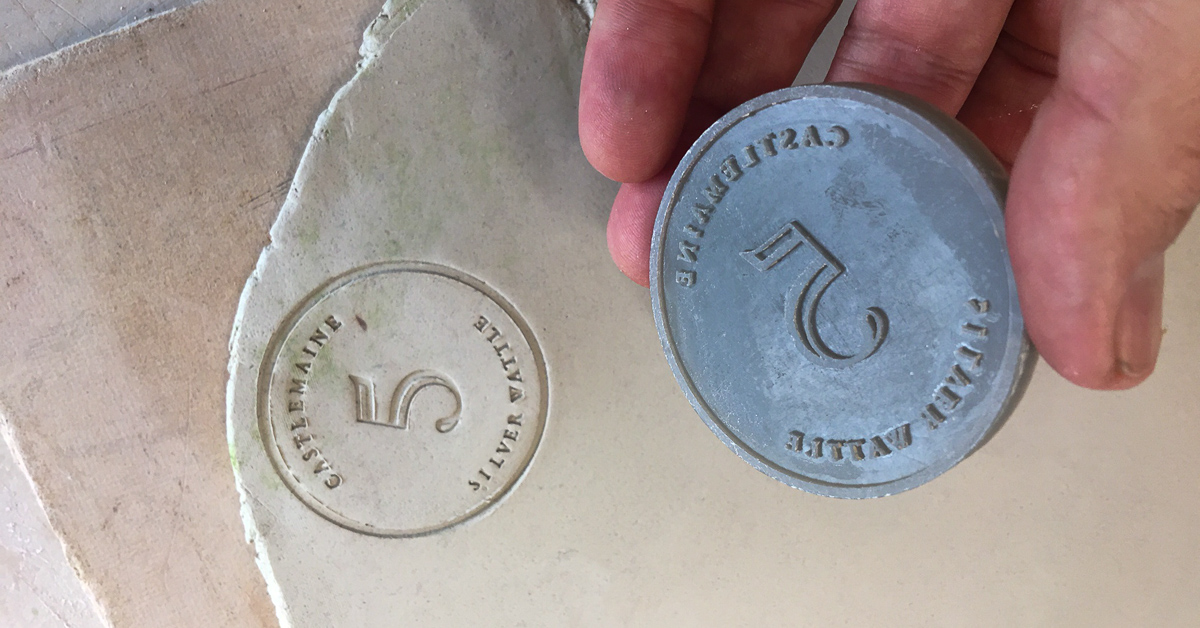 The project will culminate in May 2022 with an exhibition and public experiment. Garland will continue to invest in this story.

Our first team meeting, during which we question everything

iQweqwe: Towards the ancestors
With the tip of a needle
Eunbum Lee – 법고창신, the spirit of creating the new, based on the old
Nature and beyond - the artistic fashion of Grace Lillian Lee
Piña: Weaving Filipino fibre into the world
Workshop of the World: Lalejin
Vide Poche: A timeless dish for every day use
Making clay precious in jewellery