CIAF and Ghost Net art of the Far North 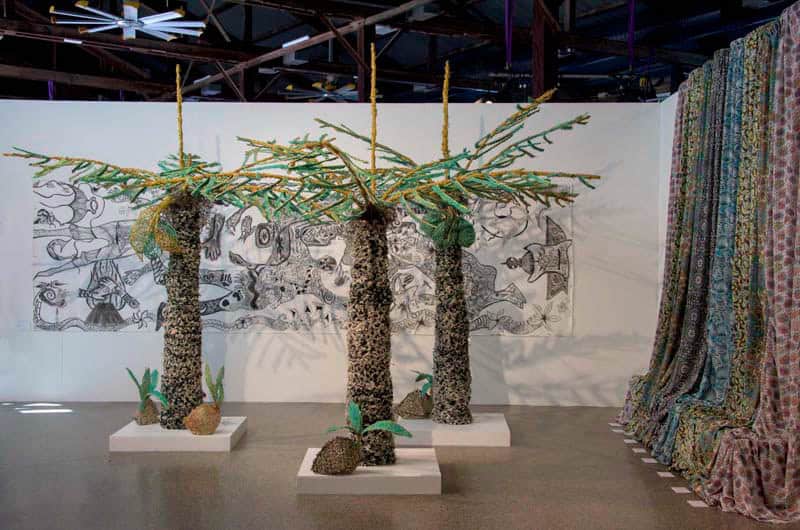 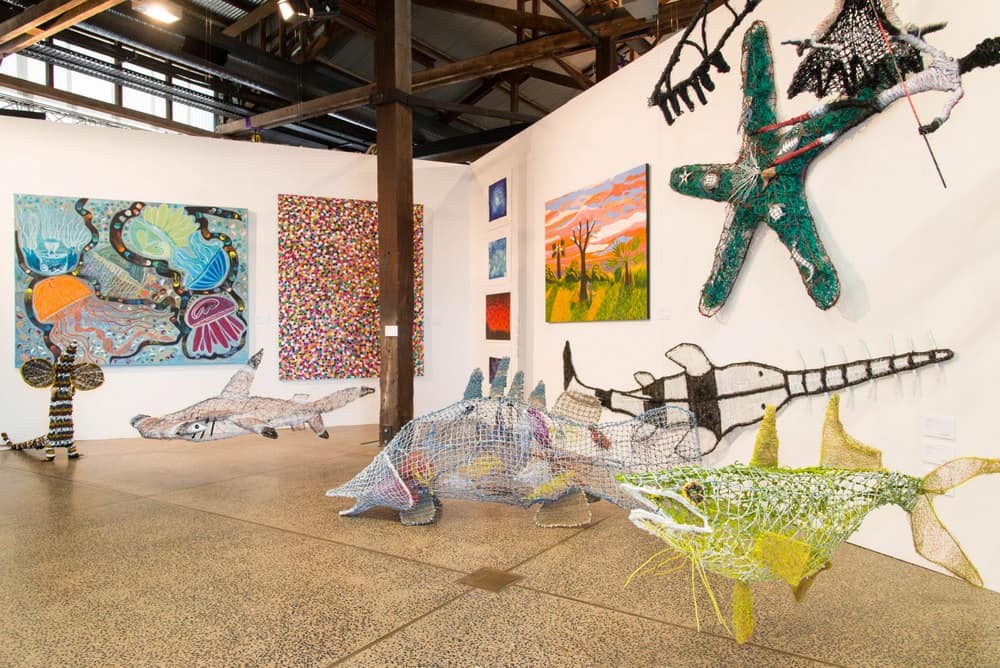 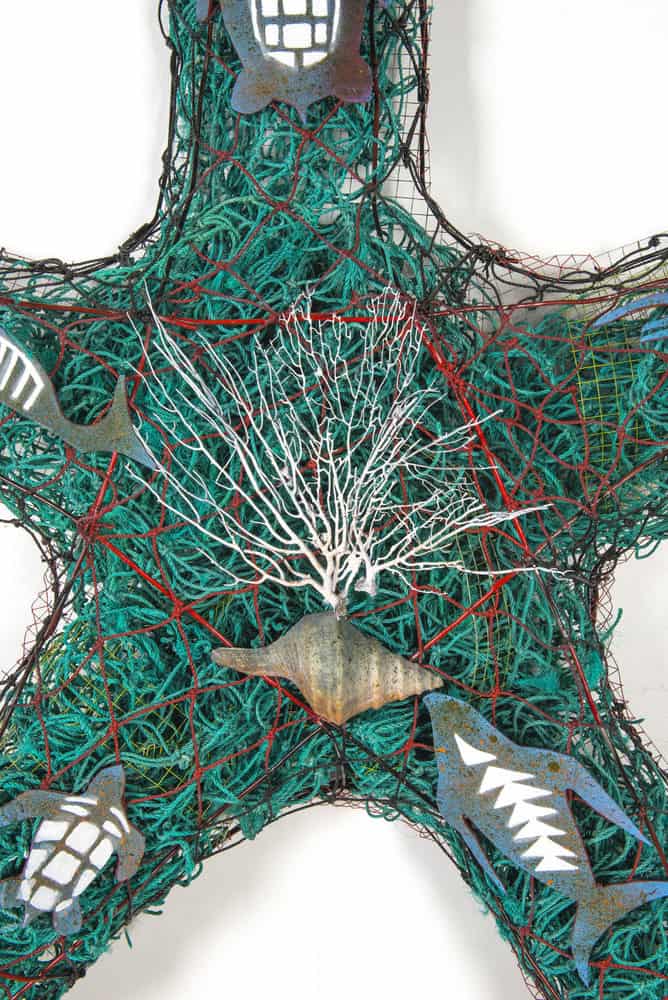 Humankind’s favourite and iconic cultural stories are those with transformation at the heart of the tale. Ghost net art falls into this well-loved category, for it is a tale of human cruelty turned to benefit, about ugliness turned to beauty and about Indigenous art and the economy of recycling.

Although the gist of the ghost net art story begins in 2008, it is known that plastic-based unattached fishing nets have been awash in the Arafura, Timor and Coral seas for decades.  In these waters, as in the Gulf of Carpentaria, illegal fishers on the run, or fishers impatient with gear stuck on reefs or the ocean floor, cut their nets loose. Adrift, powered by strong shifting currents and storms, the derelict nets become uncontrolled changelings – the clutch of the floating meshwork is certain death for marine life caught in its entangling web.

Since 2004 Indigenous rangers working on the shores of the Gulf and the Torres Straits have pulled more than 13,000 free-floating nets from its waters, rich in diverse marine life. Reportedly, approximately 800,000 cubic metres of deathly netting are adrift.

Sue Ryan of GhostNets Australia, purveyor of the initial program from which the first ghost net art pieces came to the Cairns Indigenous Art Fair in 2009, says even before Indigenous rangers began clearing ghost nets from beaches, people were using them for a variety of purposes and they were an established part of life across the Cape and the Islands of the Torres Straits.

“You might see ghost nets used as screens on verandas, adorned with shells and glass or plastic floats, or as fencing for chook pens. Fishing and yam bags were made from pieces of net found washed up on beaches, “ she claims

In 2008, Ryan was appointed to conduct a scoping study for Arts Queensland (AQ) to ascertain ghost nets’ suitability for the production of art and craft in remote far north Queensland communities.

Four baskets produced as a result of the initial workshop in Aurukun, held after the findings of the study, were on display at the inaugural Cairns Indigenous Art Fair (CIAF), the same year.

“Mavis Ngalametta’s first ghost net basket was purchased by Rebecca Hossack from Rebecca Hossack Gallery in London for her personal collection and a second by Cathy Knezevic, a Queensland gallery owner and collector,” Ryan says.

Ghost net weaving is a signature CIAF workshop every year since the event’s inception. Under the canopy of huge fig trees, workshop participants sit on the lawn of the Cairns Cruise Liner Terminal with Sue and a contingency of ghost net weavers. They demonstrate and teach the method using a pre-structure sculptural skeleton.  By the time CIAF draws to a close, there is a giant collaborative work on display.

“Much of the success of the art has been by working collaboratively, through sharing techniques and ideas about the medium, in order to create everything from smaller merchandise items to the wildest of creations.” Ryan says.

She says that through the 20 AQ workshops held since she began in 2009, an organic process has evolved, with the idea of participants adapting the medium to their own set of techniques, skills and ideas.

“It was important for each person to develop their own work from a personal level, be excited and inspired by the material itself, and of course the ultimate outcome was to produce saleable items.”

Paul Jakubowski, manager at Pormpuraaw Art Centre says that a process of reinvention powers Aboriginal art and ghost net is a relatively new medium. He adds that in contrast to other communities where the sculptors use chainsaws and woodcarving tools, this medium works for the people of Pormpuraaw. “The creation of three-dimensional ghost net sculpture is slow and methodical and calls for patient weaving, and as such it is perfect for their mindset.

“Pormpuraaw people are traditionally hunters and gatherers and the idea that we can find what we need washed up on the shore as we walk the beach, and recycle it, works,” he says.

Ghost net harvesting is hard work, with the material often dragged from the shore in an entangled mass, some of it weighing more than 50 kg.  Paul says it can take many days to salvage useable material. “The ghost net sculptors of Cape York Peninsula should claim the origin of this new artistic genre as their very own. It is a medium that is distinctly from the Cape – with CIAF as the best venue for its display and sale,” he says

Sid Bruce Short Joe, an artist at the Pormpuraaw Art Centre, who has sold many works at CIAF, was predominantly a painter before he began weaving, says creating ghost net sculptures makes him feel happy. “ I enjoy the making of it. It keeps me occupied and I often work surrounded by my family, who often help me,” Sid says

“Ghost net is an easier medium {than painting} and I like it because it is colourful and that I can play with it and make anything,” he says.

He says that the people of Pormpuraaw are either freshwater inland people or saltwater coastal people. “Through our art we tell stories about our culture, based on totems, which identify the clan and language group we belong to,” Sid says.

The artists of Erub Island (Darnley Island) situated at the far eastern edge of the Torres Strait, began a love affair with the medium after a workshop with Sue Ryan in 2010, developing their substantial skill under the tutelage of Lynette Griffiths and Marion Geamers.

According to the manager of Erub Erwer Meta the island’s art centre, Diann Lui, the artists’ collective success is based on cultural integrity and tradition and collaborative practice. “Much of the art centre’s current work is reflects the fragility of life and connection to the ocean,” she says. “Ghost net is the perfect medium to tell this story.”

Traditionally a weaver, artist Jenny Mye says that by recycling the destructive ghost nets the people of Erub Island are helping the oceans and sea life to survive, as well as spreading the message of the problem to the world.

At CIAF 2015, Erub Erwer Meta artists displayed life size coconut trees, sculpted of ghost net. “Making art is really making meaning and my art helps me to understand the world,” Jenny says. “ The extension of traditional weaving techniques and practice using net is an easy way for us to tell our stories.” 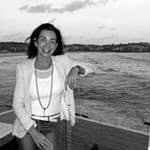 Sonja Anderson is a journalist and communication specialist with strong backgrounds in science and the arts, based in Cairns. She is dedicated to storytelling that reveals the incomparable cultures and environments of far north Queensland to audiences across the globe.  Sonja uses a mix of off and online mediums to give voice to the many peoples of the north and to express the wonders of the diverse landscapes in which they live.

Mosaic Tile Museum,Tajimi
The Nullians
The Biji-biji Initiative: Circular economy for the community
The art of polishing stones
Piña: Weaving Filipino fibre into the world
From Thailand to Turkey: Ceramics bloom in Eskişehir
Woven walls, threaded horizons: Traditional architecture in the modern urban fab...
The Outback through Afghan eyes