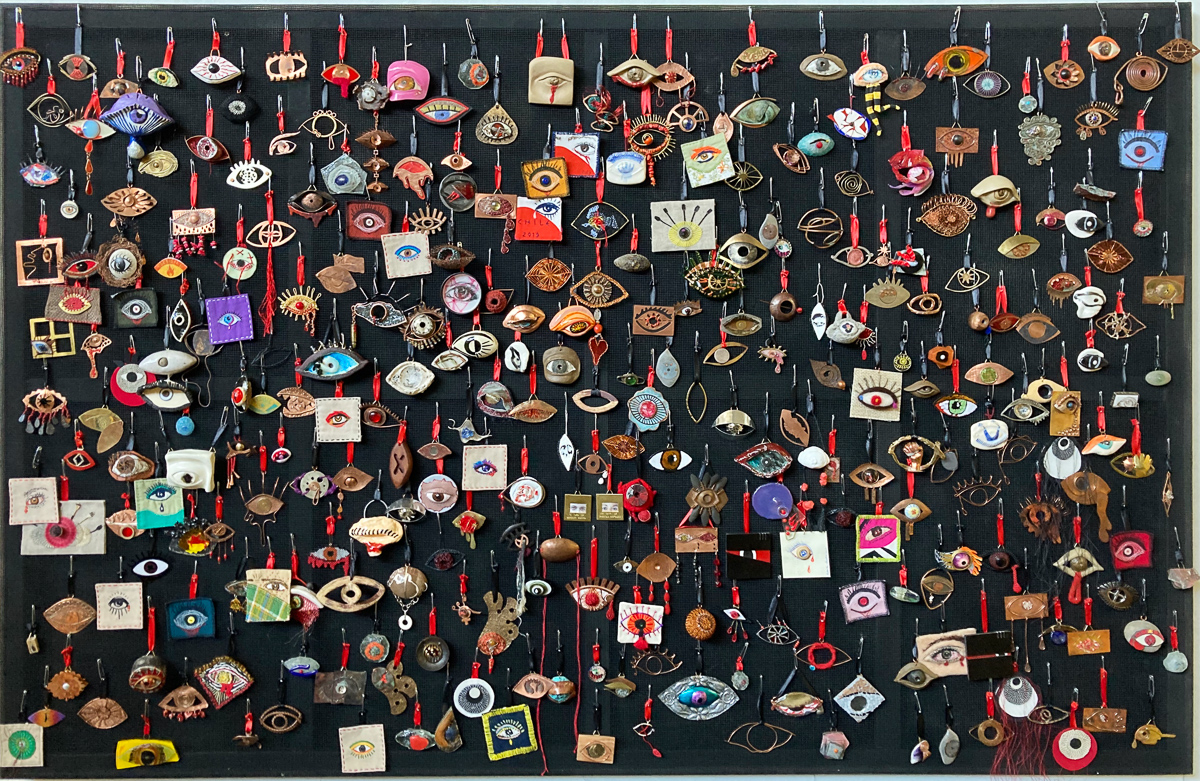 Liliana Ojeda and Aranda Feres Ojeda gather eyes and words to make visible the recent political repression on the streets of Santiago.

In mid-December 2019, Liliana Ojeda and Aranda Feres Ojeda—mother and daughter—decided to initiate an open call for jewellers and silversmiths to create “eyes”. It would be a donation as a gesture of symbolic reparation and a manifestation of repudiation towards the actions of the police and armed forces of the State of Chile. As is known, starting with the social outbreak on October 18th of the same year, the police repressed people who took to the streets with shots to the upper part of the body, causing trauma and eye mutilation. Only in the period between October 18 and November 30 (as highlighted by a work by researchers from the University of Chile, published in the journal Eye and disseminated by Nature) a brutal number of cases of ocular trauma by the impact of pellets and tear gas is observed. It is a phenomenon not previously registered anywhere in the world. Two cases became emblematic of that period. Gustavo Gatica received two shots on both eyes by a policeman, and later Fabiola Campillai received a tear gas on her face while going to work in her neighbourhood.

By the end of 2020, they had already gathered 215 donations from different regions of Chile and also from countries like Brazil, Argentina, Mexico, Spain, Italy, France, Germany, Belgium and Israel.

On February 17, 2021, the project participated in the urban art intervention circuit called 100 en1día Here Liliana and Aranda staged a show on Paseo Bulnes in downtown Santiago. In this instance, the donations were exhibited and the work Ojos Para Chile was created with the help of a group of volunteers and many locals, who collaborated by choosing a piece and its location within a large black canvas. To give shape to this collective work, they took as inspiration the ex-votos or milagritos that they have seen in Latin American churches. As they stated: “this work is to communicate the strength of a people that together is not defeated, to leave a testimony that does not allow us to forget what happened. To look again and again at these jewel-eyes that were snatched from the lives of so many people”. 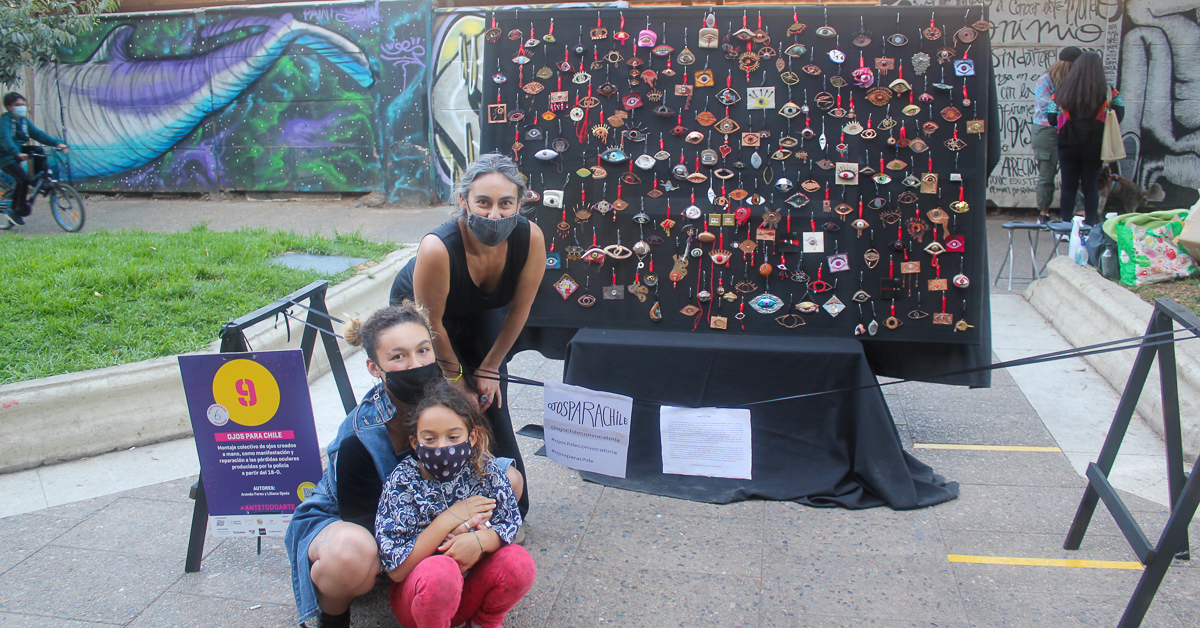 Ojos Para Chile continued to grow until October 19th of 2021 when they managed to have an opening of the work in the Museum of Memory and Human Rights (Museo de la Memoria y los Derechos Humanos) in Santiago. Here the project ended with a ceremony where two survivers were invited to join and talk. All attendants finished the work together by adding the new donations to the canvas. The work ended with more than 300 pieces, and it will be kept in the museum and exhibited for three weeks.

The printed text on the walls of the museum says at the end. “Our wish is that the anger and indignation towards the abuses perpetrated by the Chilean police and those who endorse their actions are reflected in this little great gesture. Hundreds of laments are now looking at us to demand and call for justice”.

The eyes are the jewels of the body

This was part of what was said in the ceremony:

Liliana: We are from different generations. I was born in a dictatorship and lived my first 16 years under the military regime. Aranda was born under a democratic regime, at the beginning of the new millennium. She does not have that fear of authority, she is used to saying what she thinks and she speaks with inclusive language.

Aranda: This project was born from the need to express ourselves from all the spaces we inhabit. In this case, a space that we share is that of jewellery. From this shared passion, it occurred to us to convene our peers to create with their hands the eyes that Chile is missing.

Liliana: The eyes are the jewels of the body. It is natural for a jeweller to make them. They are the most precious. Skylights that illuminate the face, the windows of the soul.

The work Ojos Para Chile is an observatory made and dedicated to all the people who have learned to observe. Although a few cannot tolerate that we are doing it. Those are the ones blinded by hatred. They only know how to punish. They eradicate from the landscape with gunfire those who do not fit the norm. Those who resist.

We know that the view goes far beyond the eyes. That view I’m talking about, continues to radiate strongly from Gustavo’s face, from Fabiola’s face. They have not been able to turn off their gaze from them. And that view, which is the same as so many, has come so far that today it shows us the way and inspires us”.

Luciana Saez from Argentina wrote, “These eyes go beyond the condition of an object-organ to become a symbol, and from there, show that the physical traumas left by police violence, the people can make them a flag, and instead of intimidating they empower them. Eyes for Chile, weave a web of glances so that a pack of hungry eyes take the monstrous form of the nightmare that the powerful fear: the dream of the awakened people who rise to create a more just world.”

Fabiola Campillai said: “Thank you for inviting us. We are happy to be here. It’s been two years since the social outbreak. We are more than 460 people who have lost our eyes in the hands of State Agents. That is why we don’t want to be victims but survivors. To create a new Chile with respect and memory. Memory for never again to have our rights violated. That is why today we raise our voice to ask for freedom, truth, justice, reparation, and guarantees of no repetition.”

Nicole Kramm said: “It is hard to be here. I have been here in the past, covering events just before I had eye trauma. Just before I stop seeing through my left eye. Today I come with my camera as a resilient act. I studied cine and photography. Unfortunately, they took my working tool. It’s been really hard to stand here today.”

I wish truth and justice for all my colleagues. I’m part of the ocular trauma coordination. We are in the fight for justice and for them to pay for what they did to us. To please in this country impunity stop deepening. We are scared that this continues to happen. I don’t want more peers not being able to see with one eye nor both of them. I don’t want this to ever happen again. 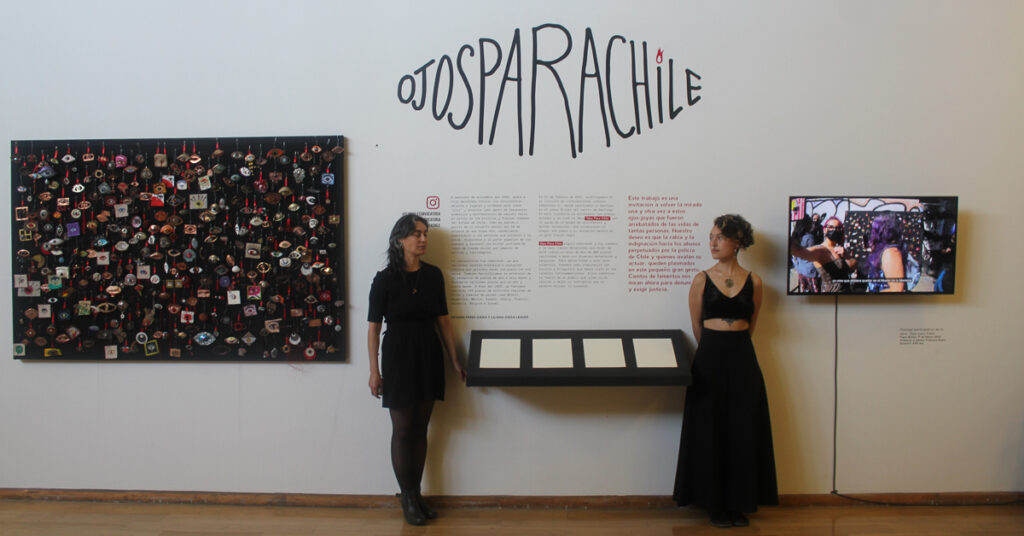 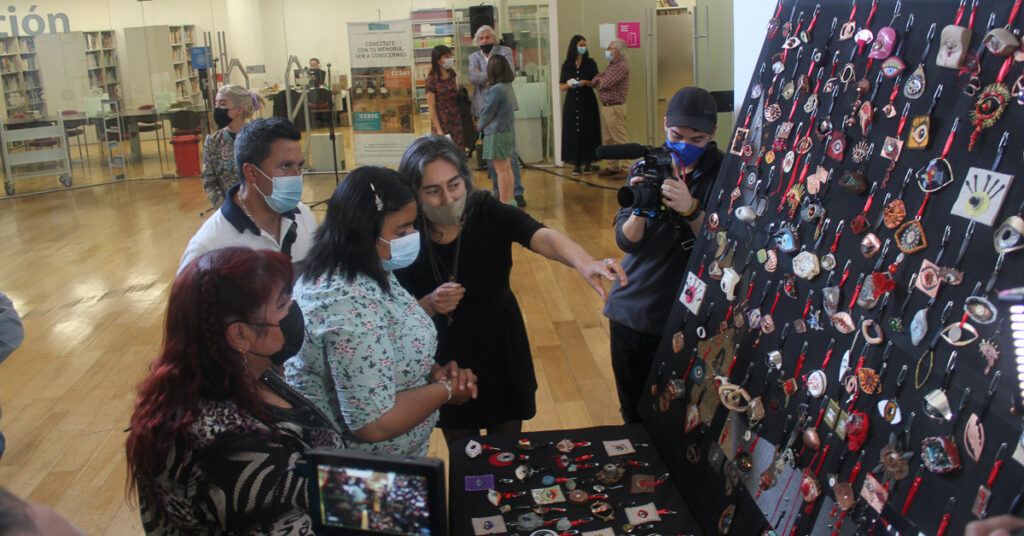 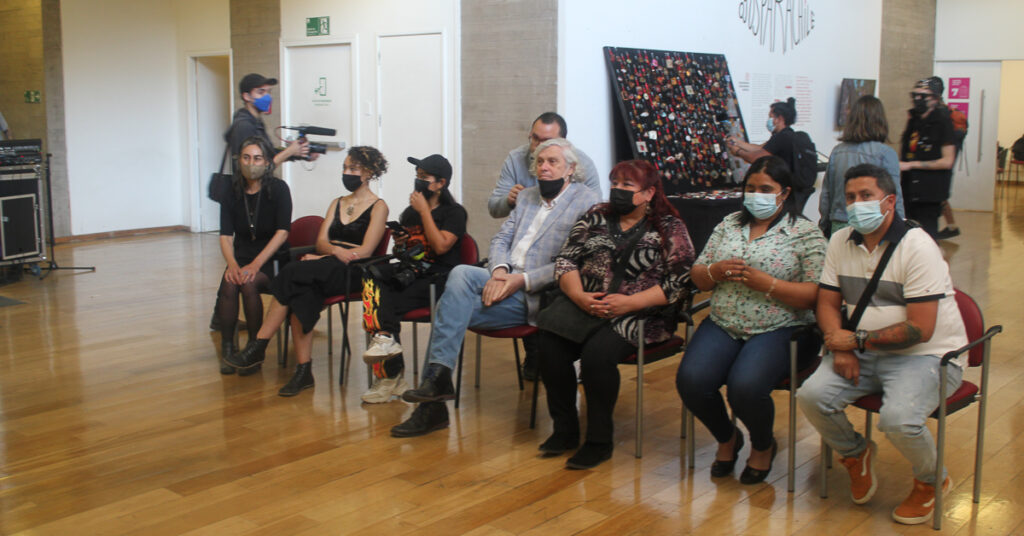 This was written by some donors of pieces for Ojos Para Chile on their social networks:

Honour the memory from the heart / I let go of this pain / I wish that the tears to cleanse the eyes and the heart of the pain of injustice / A splash or something that exploded, expanded and ended in these crying eyes / I send my humble contribution, I hope this work is a space and a show of gratitude to all the people who directly or indirectly suffered this drastic change in their lives / There is no Destruction without Construction / Do not forget me / They will have taken their eyes off, but the blind is on the opposite side / Thank you for allowing us not to forget so many victims of eye trauma on the road to a true democracy / Tear of blood / The pain that these people have and have had to have lost an eye or both deserves all our effort contributing in my case with this small and humble work / I send a solidarity creation in these times of crisis / I remember all that darkness, sitting in the workshop and trying to fight against it. I see the first jobs I did after the 18th, I see my struggle against that darkness, working with colour.

/ The bullets that were thrown at us will return / Eyes that cry out for justice, ask for changes and call for reflection / This is a tribute to those who lost their eyes in this demand for social rights because it could have been me, a family member, a friend or you / The eyes emit an energy that is the same energy of the soul, that is why they are known as the window of the soul. Eyes that were and are no longer / Gustavo’s gaze / In Latin America we have lived an epistemicide for decades, a constant erasure of memories and knowledge / Resist and report in all possible ways / Flowers grow in the sand / They can take out our eyes but do not penetrate our souls / They are not for sale / Let’s not forget /

/ Nothing will be able to repair the mutilation of glances that occurred during 2019 and 2020. This piece seeks to keep what happened alive in memory, alive in memory / Eyes that were opened, minds that awoke, voices that were raised / May not be blinded by privilege / My consideration for those who are capable of fighting with the present body / Dismembered / We have not forgotten the lost eyes / It cannot be forgotten / Dignity / I do not forget the people mutilated by fighting / Traumatized iron eye by the state / I hope this will never happen again and that justice is done / We will not stop seeing what they do not want us to see / Do not forget how we were repressed and they tried to silence us by exercising violence and torture with weapons, with fear, with silence / Damaged eyes / See without eyes, look now with heart and emotion / Attentive and mobilized. Resistance! We are together / For a more just Chile / With love, flower eye 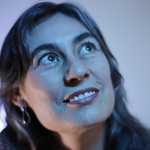 I am an artist and jeweller from Santiago, Chile. I have been practising art and crafts for more than 20 years. www.lilianaojeda.com. I’m part and co-founder of Joya Brava Association. Lately, I have been involved in collective projects that combine crafts and politics. I believe that from our practices we have a voice and we can express our thoughts through what we make.

Izandla Zethu: Fine jewellery with what's at hand
The tinsmith and I shared no language
Carlier Makigawa ✿ Delirious in Uzbekistan
iQweqwe: Towards the ancestors
A silent conversation with Jimmy Poland
Oaxacan jewellery: The legacy of Monte Albán 🇲🇽
Proyecto "Las Fábricas" - Last words and weaves in Santiago
Nature and beyond - the artistic fashion of Grace Lillian Lee