Fibres for a foodie 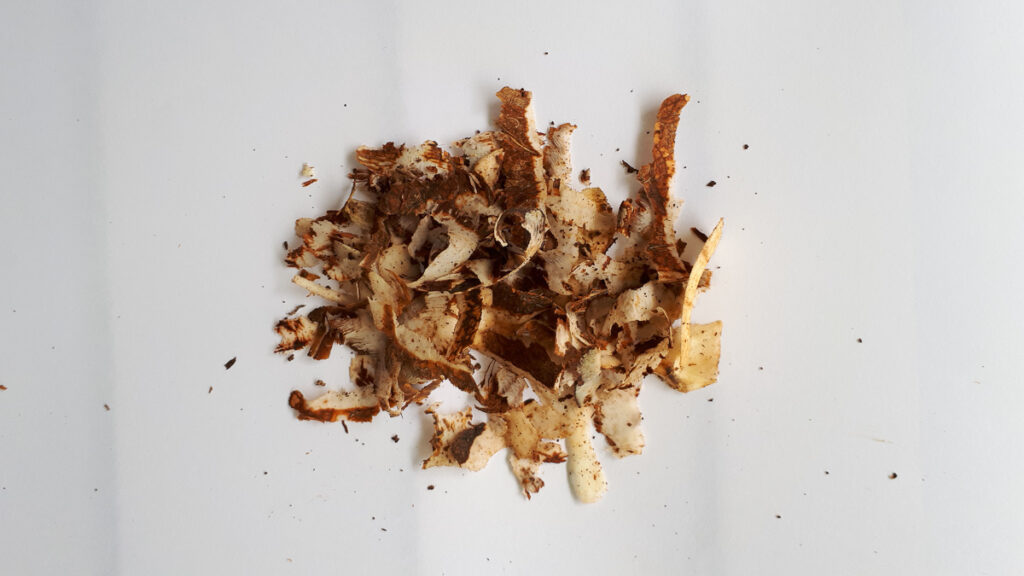 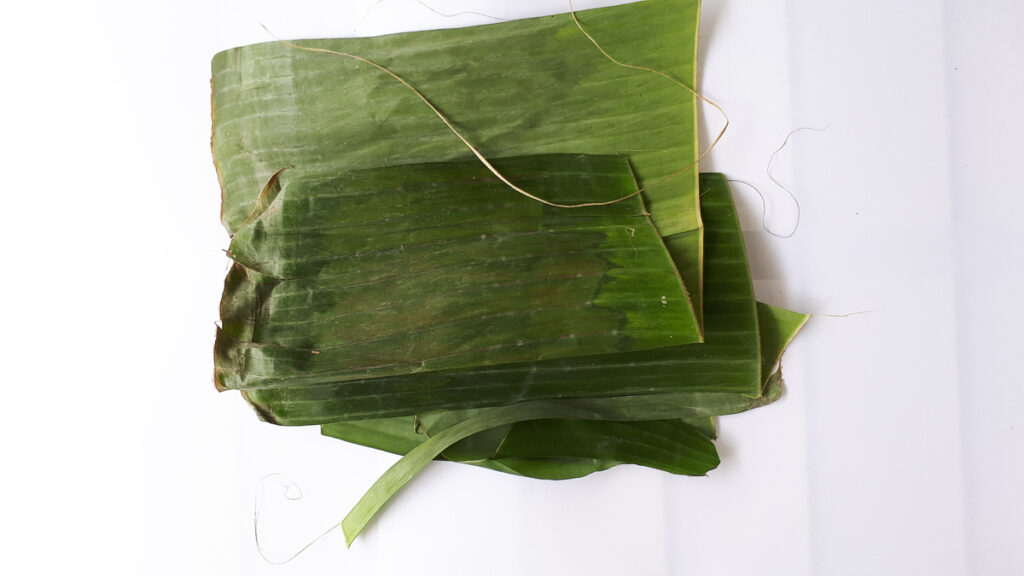 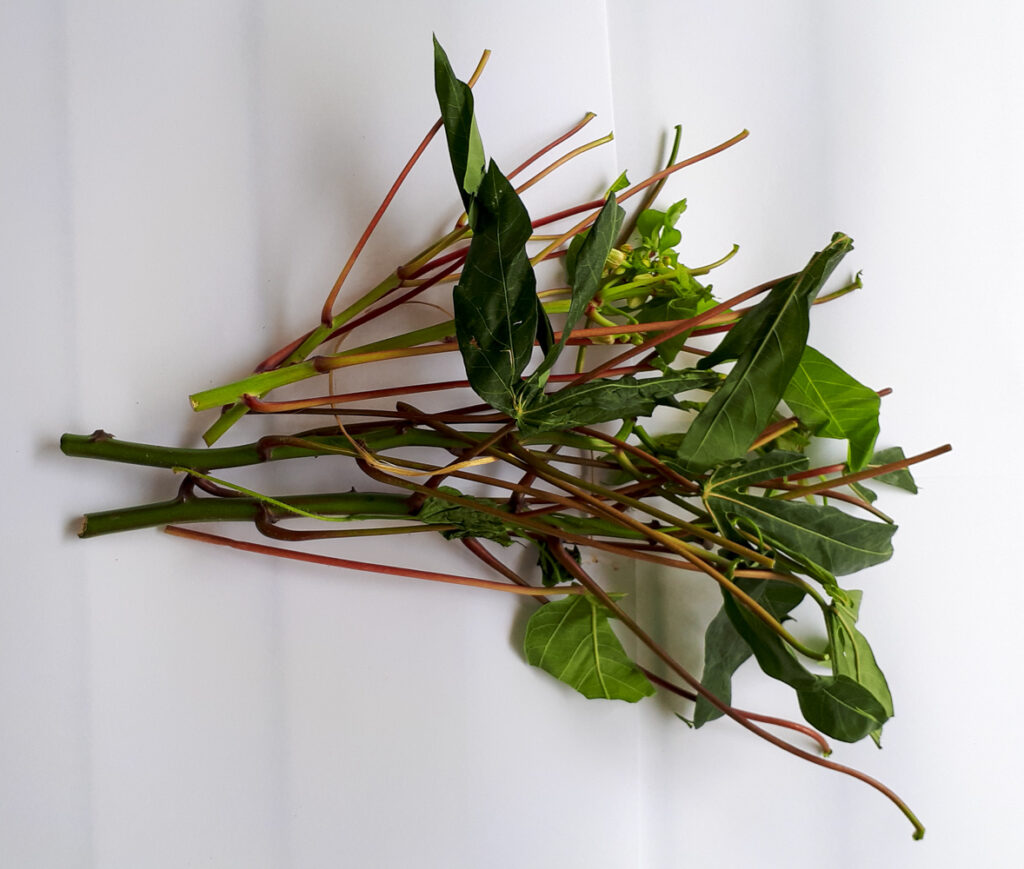 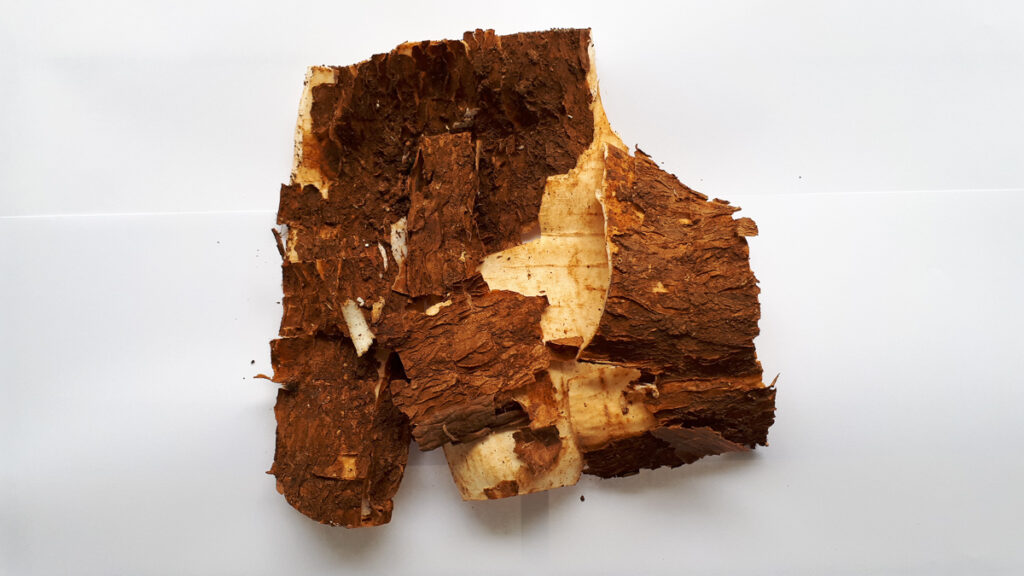 Sabrina Sakina has found a way of using the waste produced in cooking the Indonesian food she loves.

I am a foodie. My job as a textile lecturer in Indonesia doesn’t pay much, but most of my income goes to food spending, whether it is eating out at the latest cafes or buying quality groceries. I believe that a happy tongue and stomach will lead to a happy life.

Naturally, I try to tie in my job with my hobbies. Alas, being a textile lecturer does not have much to do with eating. Or so I thought.

Along came Nidiya Kusmaya, a fellow researcher who has an interest in alternative materials. Nidi had just returned from Korea after a brief art residency on natural dyes, mostly taken from kitchen waste. So we discussed opportunities for creating material out of food waste and pushed a proposal for our project called Fresh Trash. It would focus on utilizing food waste as an alternative base material for textile fibres. After all, according to FAO, globally food and agricultural waste amounts to 1.3 billion tonnes each year. 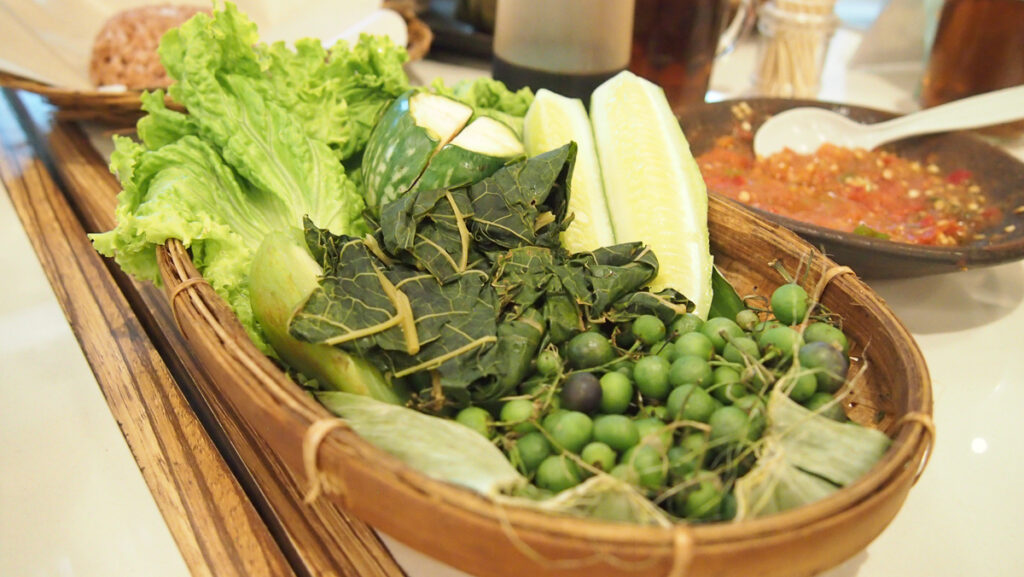 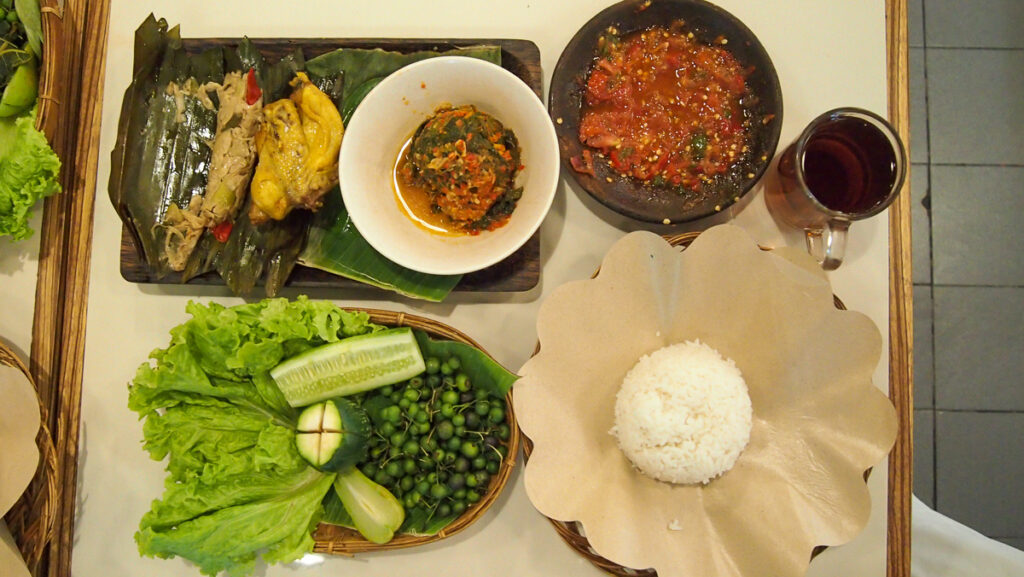 Bandung, where I live, is a part of the Sundanese region. It is famous for its leafy complimentary dish called lalapan. Traditionally, we have a way of serving our main staple, which is rice, called nasi timbel. The rice arranged in a banana leaf wrapping while piping hot, and then left to sit. This allows the rice to absorb the fragrance from the leaf while cooling down. Serving cold rice in other regions of Java, for instance Central Java, would be frowned upon. But here in Bandung, it is a celebrated and familiar custom. 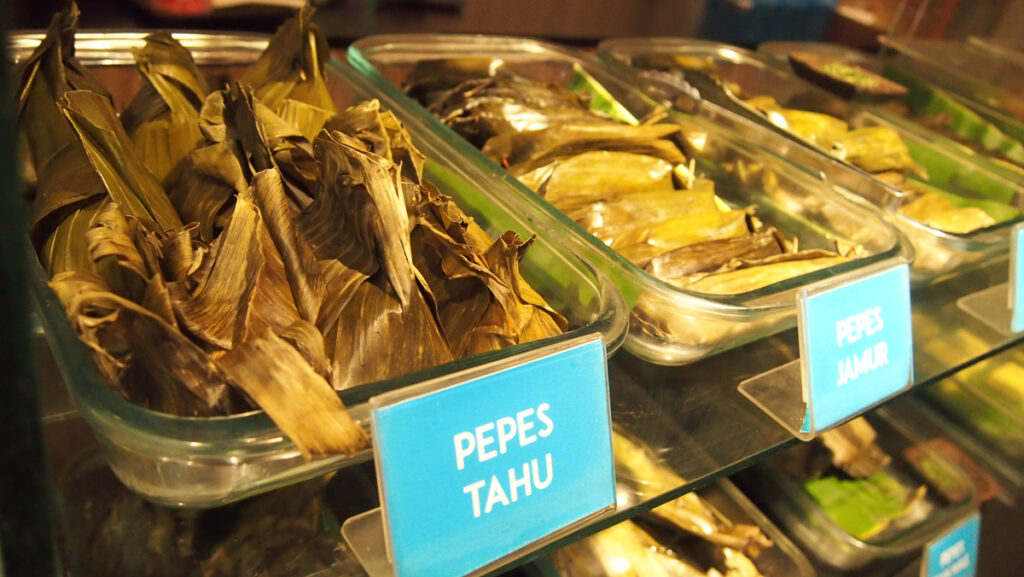 Another common dish in the Sunda diet is pepes. Pepes basically means to cook wrapped in a leaf. Servings of seasoned protein or vegetables are put into a banana leaf wrap, secured with a bamboo pin, and steamed to soften. Even garnished rice can be turned into pepes. As you can tell, banana leaf wrappings are making a repeat appearance here.

Tempe is another local food that is wrapped in banana leaves. Fermenting tempe soy beans in layers of banana leaves is a traditional practice, and it is also considered healthier than using plastic wraps. Banana leaves are also used as an eating mat. It is common to find a Sundanese meal served on a platter of lightly singed banana leaves. When served as a community meal, we call this practice botram. The leaves are singed to sterilize and make them more pliable.

It is a sad story for these leaves. They are used for food, but are not eaten. They are harvested, used as wrappings or mats for an hour or two, and discarded shortly after. Most of the time, the leaves are still in pristine form. Banana leaves are not like your typical tiny garden leaf. They are huge in size and rarely consumed by pests, which is why they are convenient to use.

Can we prolong the use of these banana leaves before truly discarding them? What form can they take after the initial use?

Nidi and I were curious so we collected all sorts of food waste from a local wet market. We found that there was an abundance of shredded coconut (leftovers from pressed coconut milk), cassava and potato peels (leftovers from starch and chip-making), cassava leaf stems (from restaurant orders), and plenty of unusable banana leaves that were in perfect shape but not big enough in size for wrappings. The seller told us these leaves would have been collected by tempe block makers if they were of the correct size.

First, we thought of retting to soften the banana leaf fibres. Retting is a tricky process. You can’t really tell when the fibres have gone through enough fermentation unless you test them systematically. We didn’t want to be tied up in rigorous testing, so we just soaked the fibres and took samples out from the retting vat after each day. We even got curious once and left the fibres soaking for months. It grew mushrooms. Despite being soaked for months, the flesh of the leaf did not disintegrate and remained as stiff as before.

It was clear that retting did not give the effect desired. So I decided to ask assistance from a friend, Alvinska, who specialized in paper-making. Instead of using banana leaf fibres as threads, perhaps pulping the leaves would be more practical. Banana leaf fibres on their own would not bind together properly. However, staying true to the plant family, we soon discovered mixing banana leaf with abaca fibres allowed the fibres to bind during the drying process of paper-making. 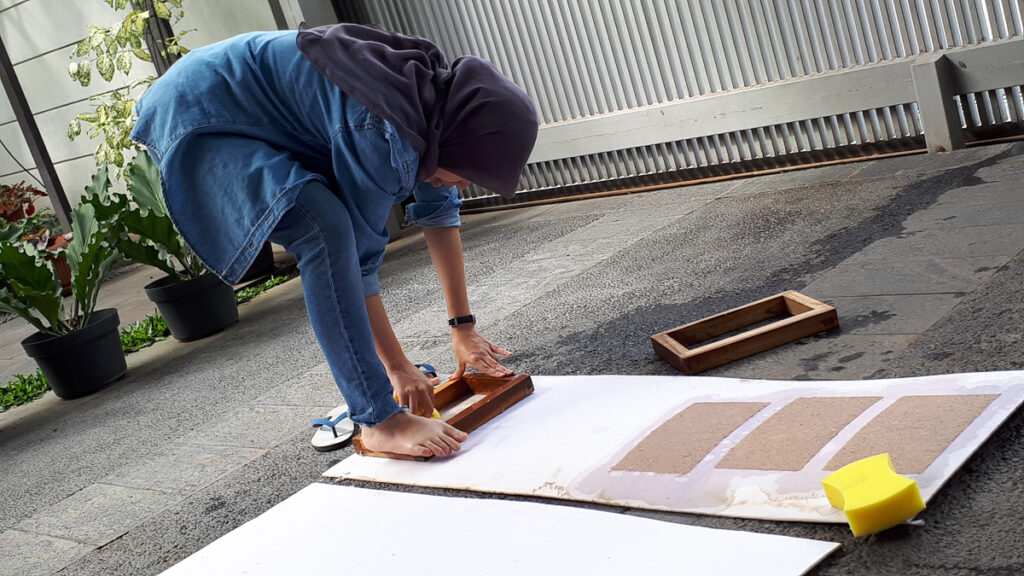 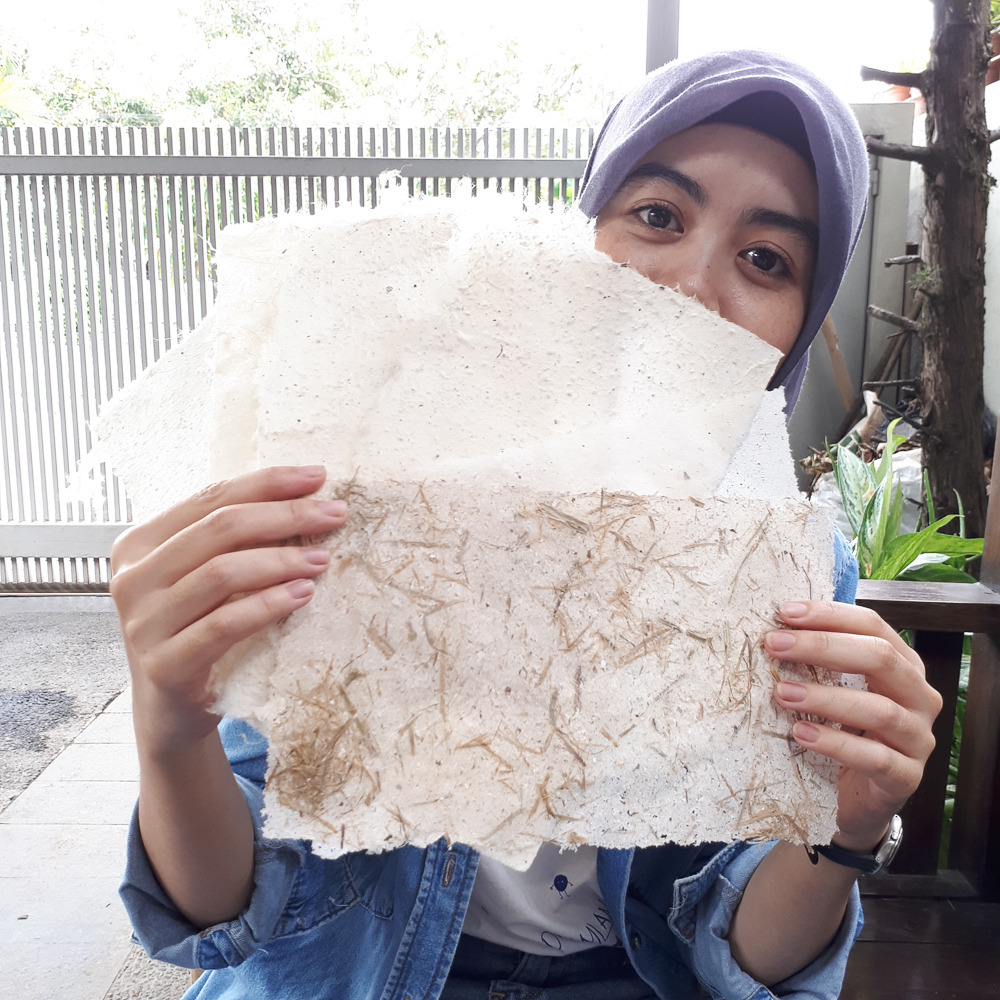 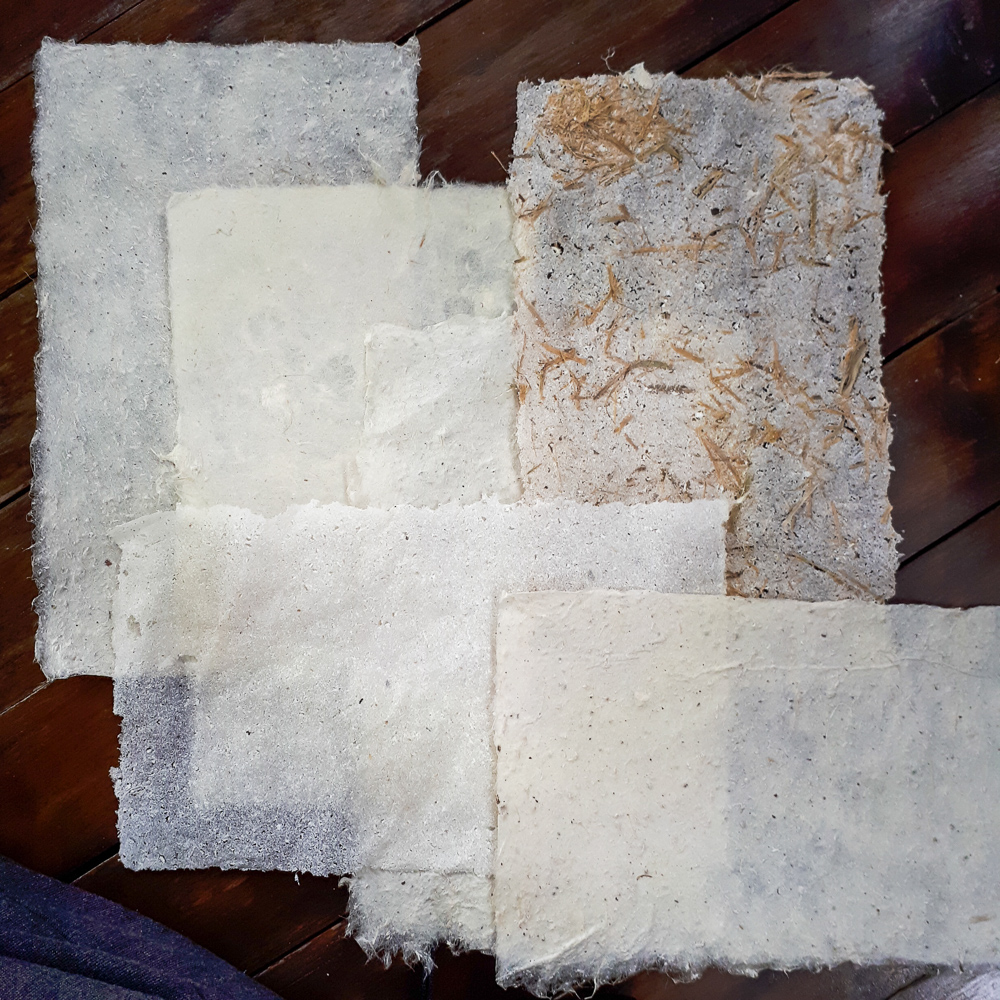 Sabrina Sakina, paper-making, 2018, an assortment of paper made of food waste from the local wet market

Once in paper form, the fibres allowed me to explore the idea of a simple circular production. Previously, the banana leaves could be used as eating mats. Therefore, once no longer used as so, I could turn them into pulp, make paper out of it, and weave the paper into plates. Plates are just another form of an eating mat. It is a simple implementation of the cradle-to-cradle concept.

These days, I am exploring pineapple leaves. It is still a part of the food industry. In South Sumatra, after harvesting the pineapple fruits, farmers would simply burn the plant carcass to reopen the plantation fields for new crop. However, my research team noticed an unutilized potential in the pineapple leaves. We are developing ideas for the region. The pineapples I ate during my stay in Sumatra came in all sorts of form: fruit slices, jam, chips, stew, even sambal. 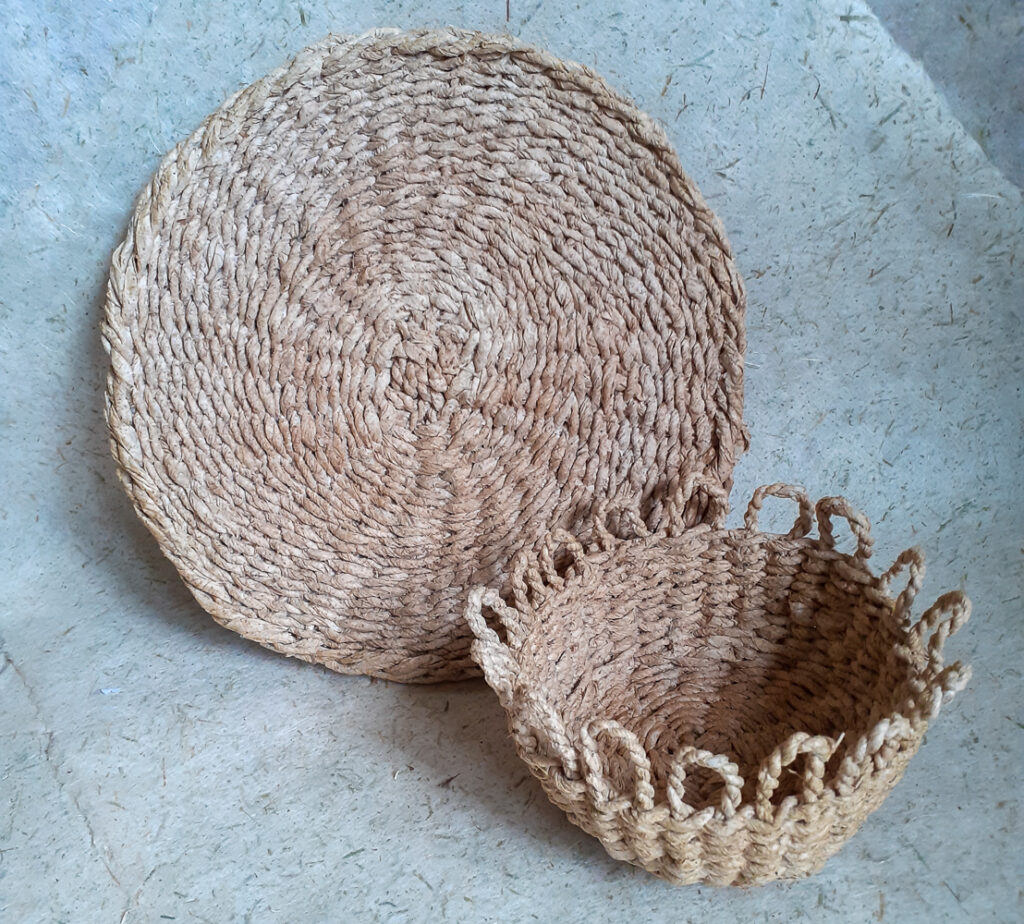 Utilising fibres from food and agricultural waste has proven to be fruitful. The more I eat, the more I find potential fibres in each bite. Being a textile lecturer now brings me more joy as a foodie.

FAO. 2019. The State of Food and Agriculture 2019. Moving forward on food loss and waste reduction. Rome. 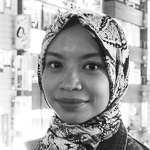 After graduating college with a degree in textile crafts, Sabrina Sakina dabbled into the magical world of garment production and fashion. A lucky chance led her to an exchange program to Japan, which re-established her curiosity in textiles, specifically structure designing. She is now based in the dynamic town of Bandung, Indonesia, and works on several projects, including topics such as e-textiles and new materials. See @shapby

Butterflies metamorphose into jewellery
Looking at the past, creating the future: The forgotten role of the museum
The Lontar basketry of Palu’e Island (eastern Indonesia)
The Elephant Shark story: batik between Java and Bali
Everything Happens to Everyone: A Rodney Glick story 🎧
Naga Kacip: A snake god at work
Making Retronesia: Modern Dutch architecture in Indonesia
We are all Merantau: Macassan journeys