Pamela See looks at the genealogy of 3D printing in Indonesia.

The rare visits from my paternal grandmother account for some of my fondest memories of early childhood. In addition to dried salted fish and Chinese herbs, her gifts included batik garments. She was sent to Malaysia as a bride for my grandfather, whose family lived across the street in Fujian Province. In Kuala Lumpur, they contributed to the burgeoning South East Asian rubber industry as manufacturers. The Chinese constitute one of three principal non-European communities who have had an uneasy co-existence in post-colonial Malaysia.

The neighbouring Indonesian archipelago is epitomised by batik. The process involves creating a concatenation of titik, which is Indonesian and Malay for dots or points. These patterns are “canted” onto textiles. The wax forms a resist for cold dyes. Aside from the chains of droplets, which bear resemblance to the geography of the region, the dyeing in multiple vats of colour also reflects the complex sedimenting of cultures over millennia.

Pembaharu: from prehistory to the Progressive Era

Although batik, in the form we recognise today, was developed by the Javanese, the origin of the tradition is contested. The technique has been practised by the Miao minority in China since the Tang Dynasty (618 to 907 CE). However,  in 671 the influential Chinese Buddhist Monk and scholar Yijing arrived in Sumatra to make this observation of the pronounced presence of Indian culture:

If a Chinese priest wishes to go to the West in order to listen and read, he had better stay here one or two years and practise the proper rules and then proceed to central India.

The account is consistent with the assertions of early twentieth-century Dutch historian G. P. Rouffaer that batik may have originated from India. Irrespective, the continued significance of the archipelago as a locus for cultural and commodity exchange is irrefutable.

From the early seventeenth century to the mid-twentieth century, the Dutch East Indies was valued as much for its geographic location as its natural resources. Situated between the South China Sea and the Indian Ocean, the port of Batavia was established as the centre of The Dutch East India Trading Company. In addition to syphoning the Spice Islands for mace, clove and nutmeg, the Dutch traded with China for porcelain and tea. They primarily sourced silk and cotton, substrates for batik, from Dutch “annexed” regions of the Indian subcontinent. This rhizomic network also funnelled cultural practices and, subsequently, technologies through the port and onward to Europe.

Indonesia is presently the second highest producer of rubber in the world. It was introduced to Southeast Asia during the 1890s to support the burgeoning bicycle-cum automotive boom. A half-century earlier, vulcanisation stabilised the material to withstand high temperatures. This led to its application in the manufacture of a broad range of products from hoses to shoe soles. The global proliferation of 3d printing or additive manufacturing during the twenty-first century may be similarly impactful.

Development of additive manufacturing during the digital era

Additive manufacturing, also known as 3d printing, emerged in North America during the 1980s. Stereolithography (SLA) was invented by an engineer, Chuck Hull, in 1983. It involves solidifying polymers in UV sensitive resin using lasers and mirrors. In 1986, a team at the University of Texas developed selective laser sintering (SLS). This technique uses a laser to selectively melt particles together. Its third iteration, fuse deposition modelling (FDM), was invented by Scott Crump in 1988. Objects are typically built by extruding and positioning molten plastic using a nozzle, a gantry and a platform. FDM is implemented in a majority of desktop 3d printers and was posited to have catalysed a “new industrial revolution” by Wired magazine editor Chris Anderson in 2012.

In 1989, a Japanese artist named Masaki Fujihata was the first to apply the medium to art as a set of SLA prints. However, despite China creating the largest 3d printed architectural structure in the world in 2015, the Vulcan pavilion, non-European creatives have been notably absent from both exhibitions and/or art publications investigating the medium. In the North American museum and galleries sector, Michael Rees and Bathsheba Grossman pioneered 3d printing during the late twentieth and early twenty-first century.  In 2010, Iris Van Herpen introduced this form of digital craftsmanship to the catwalks of Europe.

A team of designers from the Institut Teknologi Sepuluh in East Java presented a paper propositioning the application of batik patterns to create 3d printed garments at the 4th International Conference on Creative Industry in Surabaya in 2017. 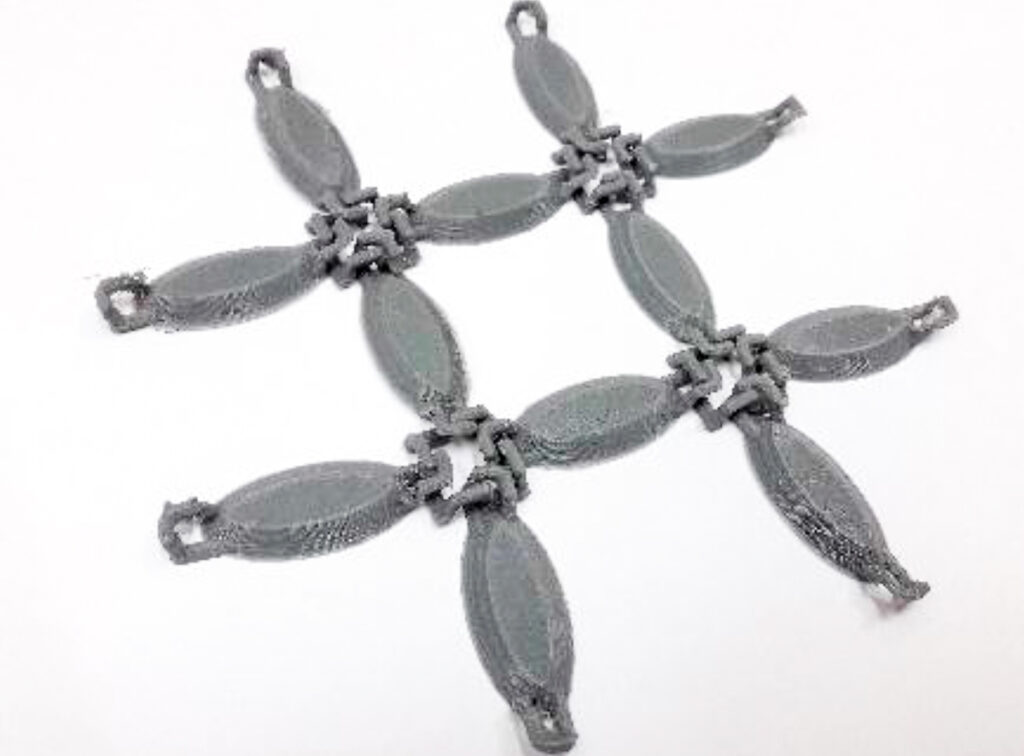 This dialogue was followed by the endorsement of Indonesian designers Amanda Azzahra and Tex Saverio in Europe and North America. Saverio is one of the key cultural exports of the nation. In 2012, his designs were worn by Ayumi Hamasaki in a music video titled How Beautiful You Are and Lady Gaga in her Fame advertising campaign. He is most widely acknowledged for his design of the wedding dress worn by Jennifer Laurence in the third instalment of the Hollywood franchise The Hunger Games. Whereas Saverio is noted for his 3d printed garments, both are celebrated for applying the medium to accessories such as masks, headpieces and rings. 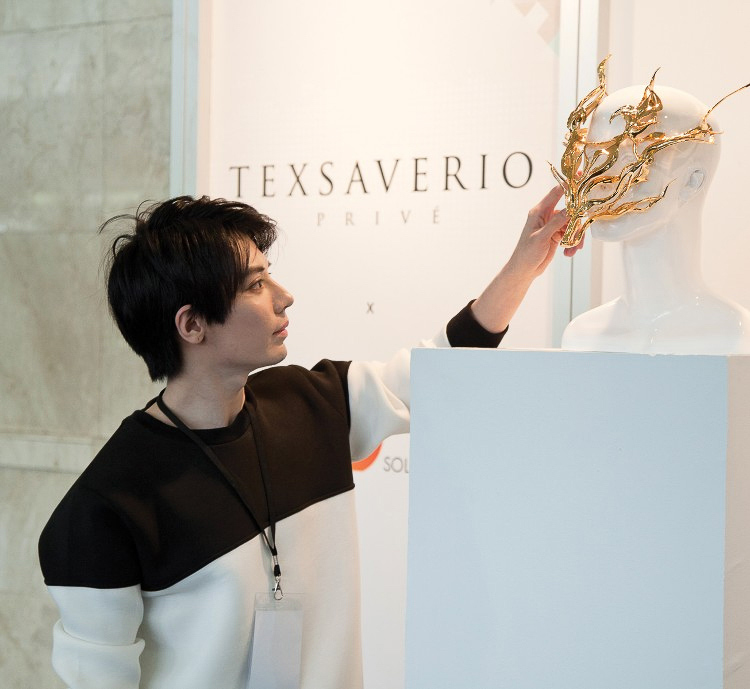 Azzahra, in particular, sources her imagery from Wayang or Indonesian shadow puppetry. Not unlike batik, the origin of the craft is contested, with historical accounts occurring in both India and China during the third century BCE.

Despite the visibility achieved by these two designs, 3d printing is relatively rare within their home country. In 2019 AMFG, an acronym for the Autonomous Manufacturing group, released a study of the global 3d printing market. Asia, including Australia, constituted 28 per cent. 5 – 7 per cent was made of ASEAN nations and Indonesia made up 4 percent of the ASEAN 3d printing market. A study conducted by the Universitas Gadjah Mada and the Universitas Pembangunan Nasional Veteran Yogyakarta published in early 2020 demonstrated that the rate of 3d printer ownership amongst a sample group of 109 was negligible.

The impact of 3d printing on craftsmanship may be difficult to measure due its implementation as rapid tooling as opposed to direct manufacturing. 3d printing evolved from a form of rapid prototyping into a form of rapid tooling during the 1990s. The creation of patterns for casting metal is amongst the applications. The subsequent objects can be difficult to distinguish from their analog counterparts, which are typically moulded and cast from clay. In China, for example, scaling up using clay has been superseded by SLA printing. The technology to create large format SLA tough resin prints and intimately scaled SLA castable wax resin prints, the latter for jewellery making, is available in Indonesia.

However, artists like the internationally acclaimed Dadang Christanto continue to utilise traditional foundry methods. Born in Central Java, Christanto was a part of an ethnic Chinese community. He was eight years old when his father was abducted as a communist sympathiser. Batik was sold from his family shop. Fragments of the textiles feature in some of his compositions, but where possible he models patterns himself in clay.

Christanto addresses the persecution of his people through episodes of political unrest. This includes an anti-communist purge during the mid-1960s, in which half a million Indonesians were tortured and murdered. His performances have incorporated the smearing of white clay over his body. Some installations feature figures fashioned from the substrate. Their materiality is symbolic of fragility. The sensitivity of the subject matter is emphasised by the use of the hand to express the explicitly inhumane.

By contrast, Franciscus Xaverius Harsono is a Javanese artist of Chinese descent who utilises a hybridity of analog and digital technologies. Since 2009, his primary focus has been investigating the violent insurgency which led to the proclamation of Indonesian Independence in 1949.

According to Mary Someers Heidues, who wrote the article “Anti-Chinese Violence in Java During the Indonesian Revolution 1945 -49” which was published in the Journal of Genocide Research in 2012,  the ethnic Chinese community was targeted with “rape, arson and sometimes massacres”. His father documented the exhumation of mass graves during the 1950s. Using the photographs as a fulcrum, Harsono has been honouring the victims of the atrocities through art installations. 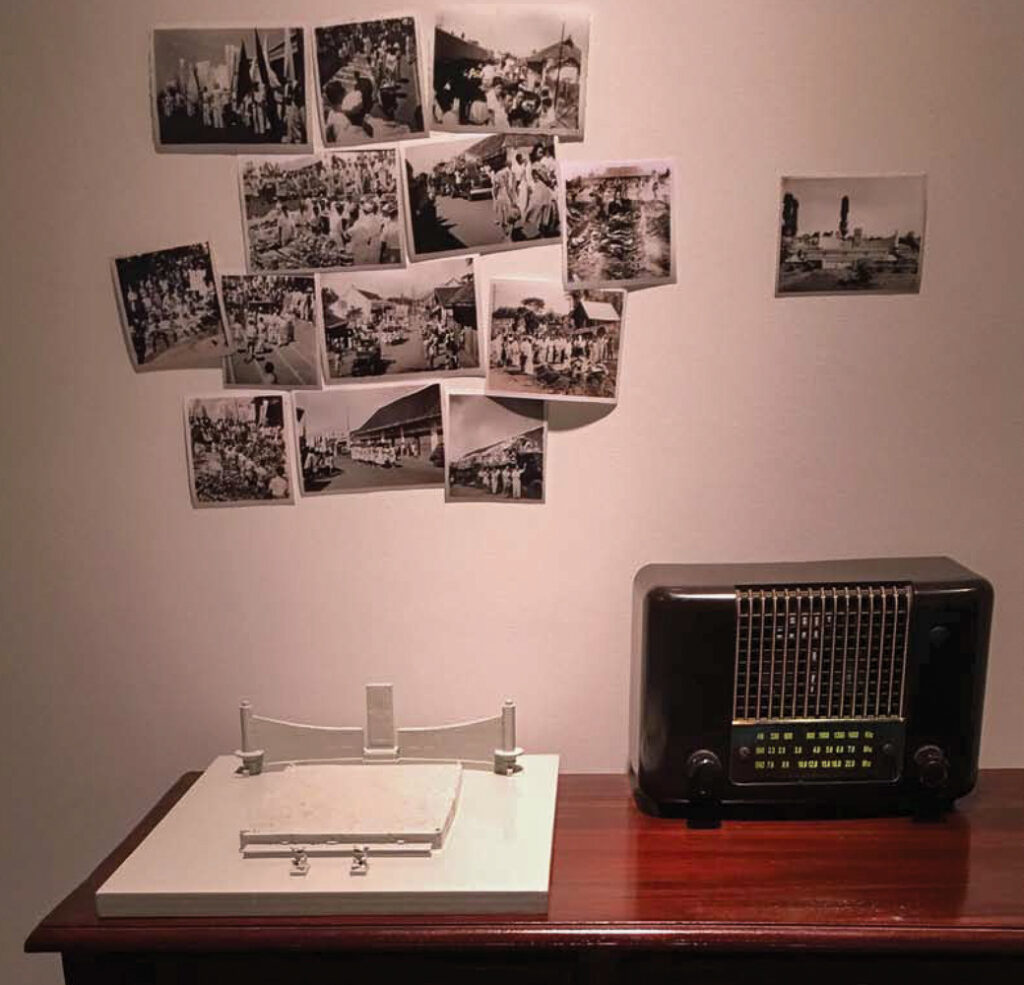 Installations such as Gazing on Collective Memory, Memory of the Survivor and The Light of Spirit include photographs of murdered Chinese Indonesians juxtaposed by offerings including Chinese ceramics, wooden “cookie” moulds and metal spoons. These were complemented with suspended electric candles, government documents and miniature reproductions of the tombstones above their mass graves.

FDM printing was used to facilitate the latter. During the early 2000s, architecture was amongst the first industries to adopt desktop 3d printing as a “fast, easy and thrifty” method of directly producing a model from a CAD file. Harsono used photogrammetry to scan the mass gravesites. It involved his taking 360 photographs at measured intervals around the site and mapping them together. The process was devised during the late nineteenth century in Germany by civil-engineer Albrecht Meydenbauer and geographer Dr Otto Kersten.

The broad-scale 3d scanning of cultural heritage sites was catalysed by the destruction of Buddhist relics by the Taliban in Afghanistan during the early 2000s. Monuments to have been data captured range from the tombs of the Buganda Kings in Uganda to the Mount Rushmore Memorial in the United States of America. Through his use of digital technology, Harsono imbues the mass gravesites of ethnic Chinese in Java with similar gravitas. He also documented their locations on Google Maps as part of an online project titled Digital Souls.

Pembaharu from the past, present and beyond

Despite projections of significant growth in the domestic 3d printing market over the next five years, the present adoption of medium in Indonesia per capita is negligible. By contrast, Indonesia is one of the few Asian nations to have designers and artists engage the technology in international creative forums.

Its natural resources and its geographic location enabled the region to play a pivotal role in the Victorian era and the Industrial Revolution. However, its present contribution to creative 3d printing dialogues stems from the heritage of archipelago. Not unlike batik, present day Indonesia was formed through the melding of genealogies. Its cultural landscape is as much characterised by resistance as it is the layering of ideologies.

Batik has informed patterns for the 3d printing of garments. Designers like Azzahra and Saverio have ignited the imaginations of European and North American fashion aficionados with innovative designs infused with endemic folklore and traditions. This demonstrates the continued capacity of Indonesia to be a locus for pembaharu or innovation.

Grimm, Albrecht. “The Origin of the Term Photogrammetry.” Paper presented at the Photogrammetric Week, Stuttgart, Germany, 2007.

Ismianti and Herianto. “Adoption of 3d Printing in Indonesia and Prediction of Its Application in 2025.” Paper presented at IOP Conference Series: Materials Science and Engineering, Vol. 722, January, 2020.

Pamela See (Xue Mei-Ling) is presently undertaking a Doctor of Philosophy at Griffith University in Queensland. Her research focuses on contemporary applications for papercutting. She has studied the technique in a number of provinces. Her artwork features in several institutional and corporate collections including The National Gallery of Australia, The Australian War Memorial and the Art Gallery of South Australia. During June and July, her artwork will be exhibited in Ephemeral Landscapes at the Museo Gustavo de Maeztu in Spain, My Optic at Arteriet in Norway and Crossing Boundaries at Art Atrium in Sydney.