How the dye was cast on the road back to Laos 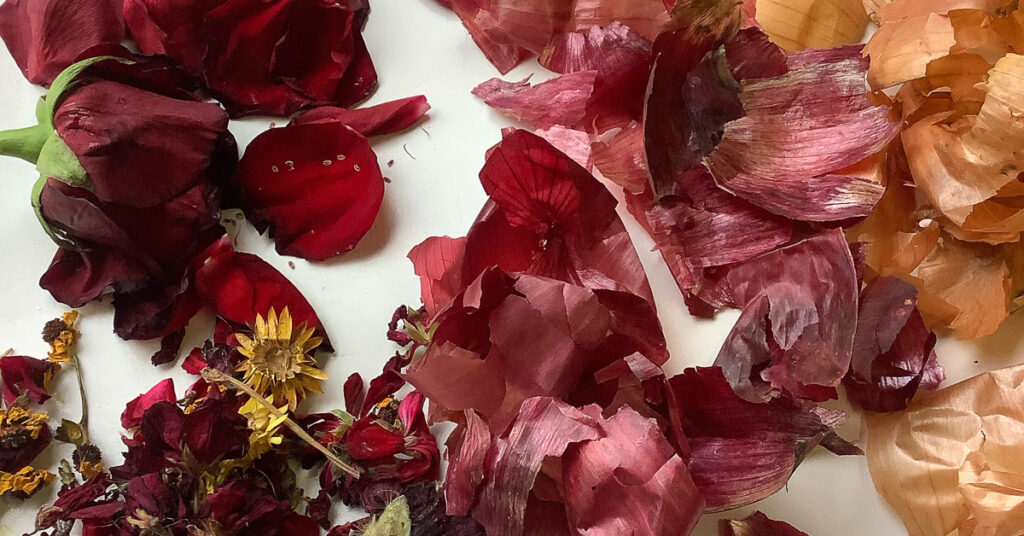 Samorn Sanixay shares the story of her return to Laos and one of her delicious rose and onion dye recipes.

Natural dyes are any colourants sourced from animals (blood) insects, minerals and plants. Most natural dyes are obtained from plant materials such as bark, fruit flowers, leaves, roots. Dyeing and colouring textiles using plants dates back many thousands of years. The actual process and technique of how to transfer colour onto cloth have changed very little.

I was born in Laos but I grew up in Sydney and Brisbane, Australia with very little interest in Lao culture and customs. I only wore the traditional sarong once or twice a year, when visiting the temple during Buddhist ceremonies such as Lunar new year.

My own natural dyes journey began in 2002 when I wandered into the yard of some weavers in a village in the north of Laos. At the time, I was a consultant doing research for UNICEF.

This was a life-changing moment. While watching the skilful hands moving through the warp and weft, I began a deep appreciation of the labour that went into weaving such beautiful pieces.

I then spent the next three years learning about the traditional craft of natural dyeing with several master weavers and dyers whose knowledge had been passed down to them from their mothers over many generations.

Something that fascinated me while visiting the ethnic hill tribe markets in Laos and Chinatown was seeing the displays of herbal medicines and tinctures.

The hill tribes were mostly Hmong people who had travelled down to Vientiane from where they lived at high altitudes. Their markets were random makeshift stalls, always located outside the regular markets. Everything about this tribespeople was interesting for me. They wore traditional clothing that was handmade and carried their babies in beautiful hand-embroidered cottons and hemps. They spoke their own language so we couldn’t communicate unless someone could speak Lao. The products they were selling at the time were probably illegal or endangered animals that they believed could heal ailments. There were small bottles that had gecko-like creatures floating in homemade alcohol that could literally knock your socks off as the alcohol content was more than forty percent!

On trips to Bangkok, I would visit Chinatown for the experience but also in search of antique clothing to try and replicate the intricate appliqués.

There were many stores selling traditional Chinese herbal medicines. They would have huge jars with herbal roots of medicinal plants or venomous snake preserved in alcohol. The stores were of course much more organised than those of the ethnic markets with dried herbal roots wrapped in bundles, parts of animals such as whole snakes, in jars and bottles steeped in alcohol.

In traditional Chinese medicine, therapeutic tinctures are often made by using alcohol as a solvent to extract the active ingredients of plants and allow them to keep for a longer period of time. The herbs which are carefully selected are steeped in the alcohol for some time before use.

The liquids in the jars and bottles were of different shades and over the years that I learned natural dyeing techniques, Khaisy, my master weaver would add bottles of locally produced alcohol. She would tell me that it helped to fix the colours.

I asked her if she had ever placed fabric in the jars with alcohol and dyestuff to which she said no because she could make alcohol herself.

So I took this fascination with the preserved herbs in alcohol and have been experimenting ever since.

When I returned home to Australia I made contact with professional chemists and biologists to understand what alcohol does and how it reacts with plants and animals.

For preservation and tinctures, alcohol is an excellent solvent for herbs, because it can extract the compounds and active ingredients that aren’t water-soluble, such as essential oils, alkaloids, pigments and resins. It’s also the only edible solvent that can effectively extract the ingredients required.

Alcohol is a preservative and gives herbal extracts a longer shelf-life. Some of the herbs in jars had been there for almost fifty years!

Alcohol is the best preservative as they last for years! A good old whisky can outlive a human and it doesn’t freeze.

Today, we are constantly being told to restrict alcohol as too much is not good for our health.

Here, I’m going to share two simple preservation methods that I have been using to create colours for small pieces of fabric scraps and some food waste.

Please note that the pinks created from the dyes in the samples are used for patchwork or products such as cushion covers that will not be washed frequently. If you want to dye clothing, use different techniques with more substantive dyes.

In one jar, I have placed two heads of red rose petals and in the other, some onion skin, roughly skin of six whole onions. 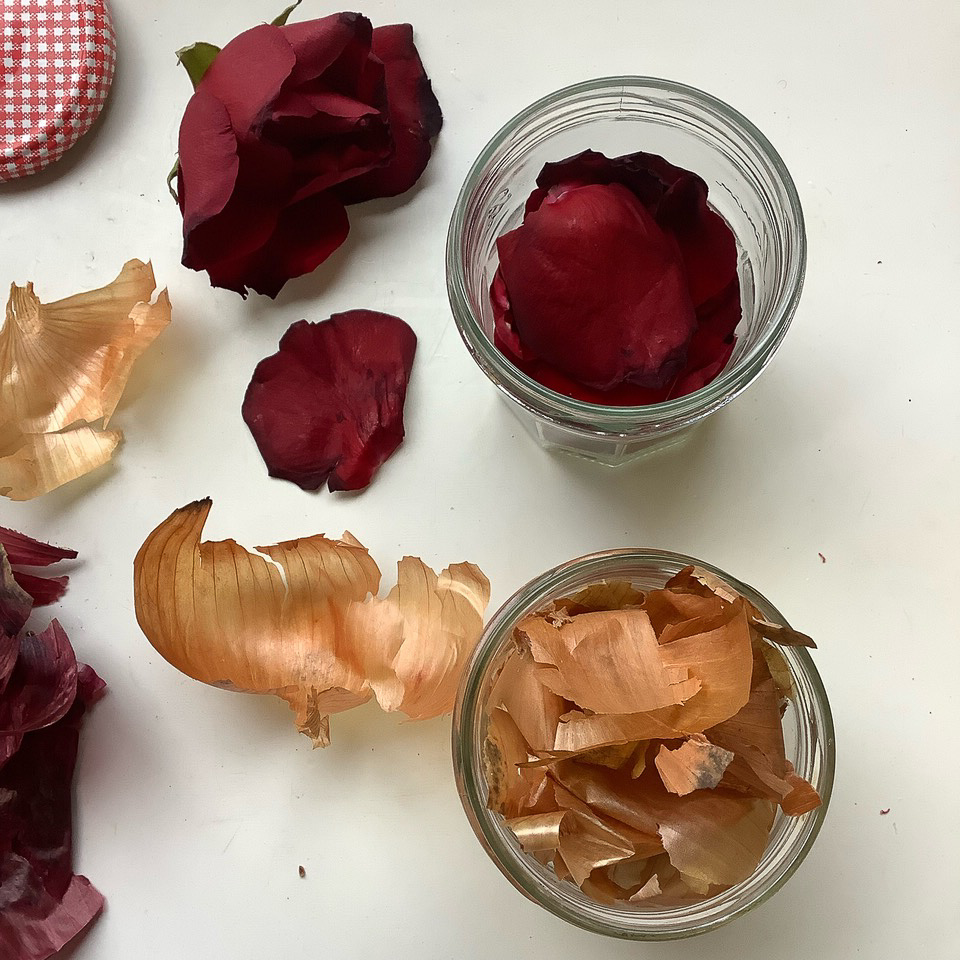 Place fabric scraps or material in the jar. 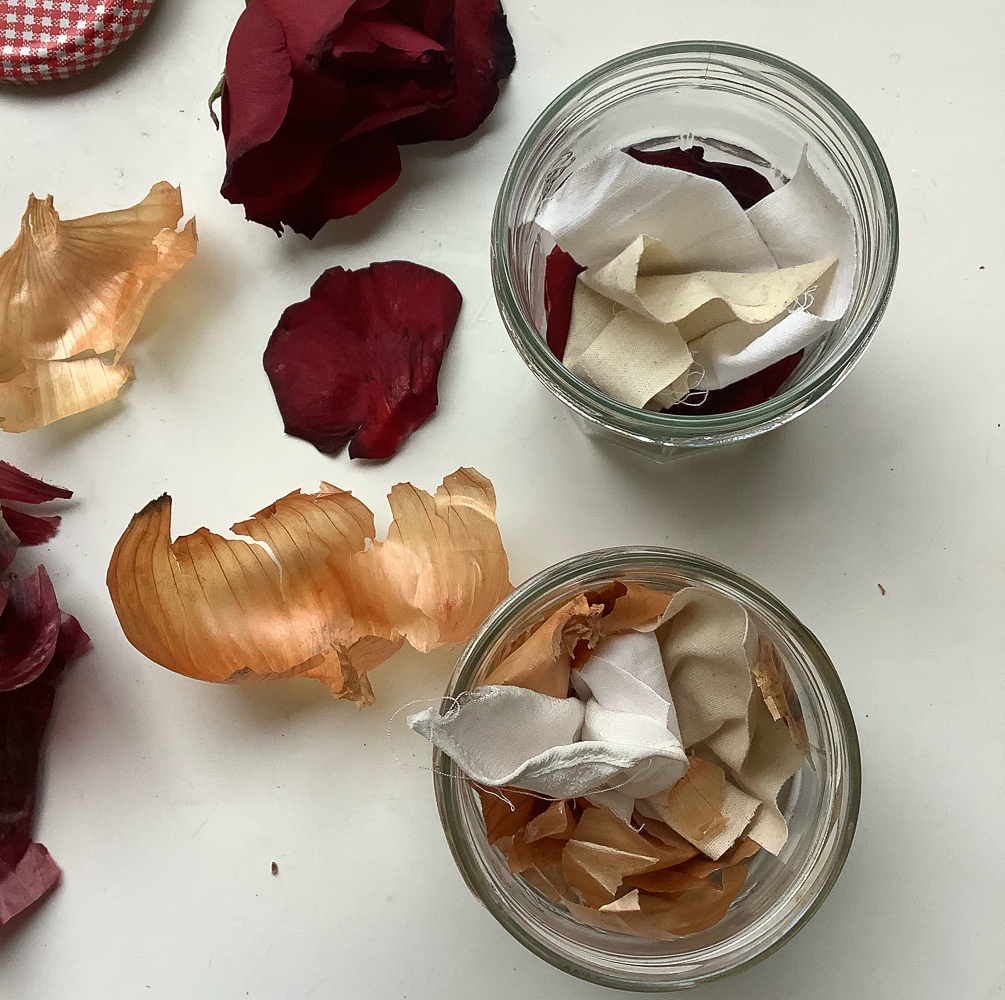 For the rose petals, I have poured in old white wine that had been sitting in the fridge for weeks.

For the onion skin, pour in boiling kettle water and make sure the contents are submerged. If there is fabric above the liquid this will create markings and uneven colour. Add a tablespoon of salt in the jar of onion skin jar. The salt helps keep bacteria from propagating. 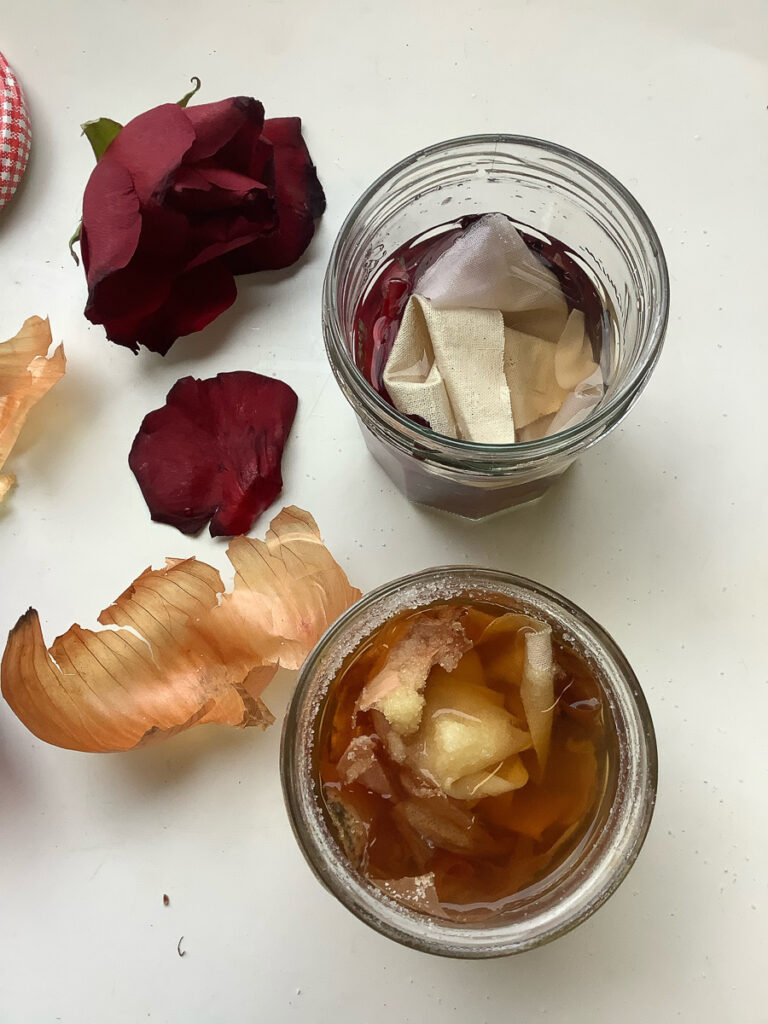 Place the lids on tightly and store in a cool dark place or the refrigerator if you have space.

For best results, allow for at least three weeks before opening the jar. 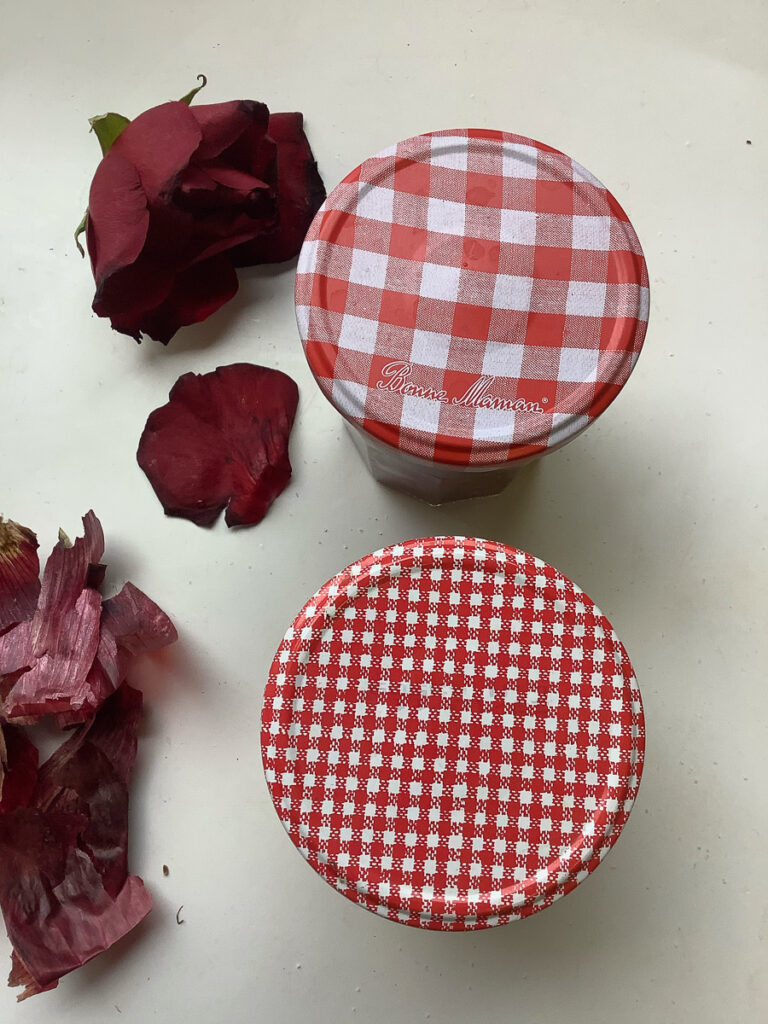 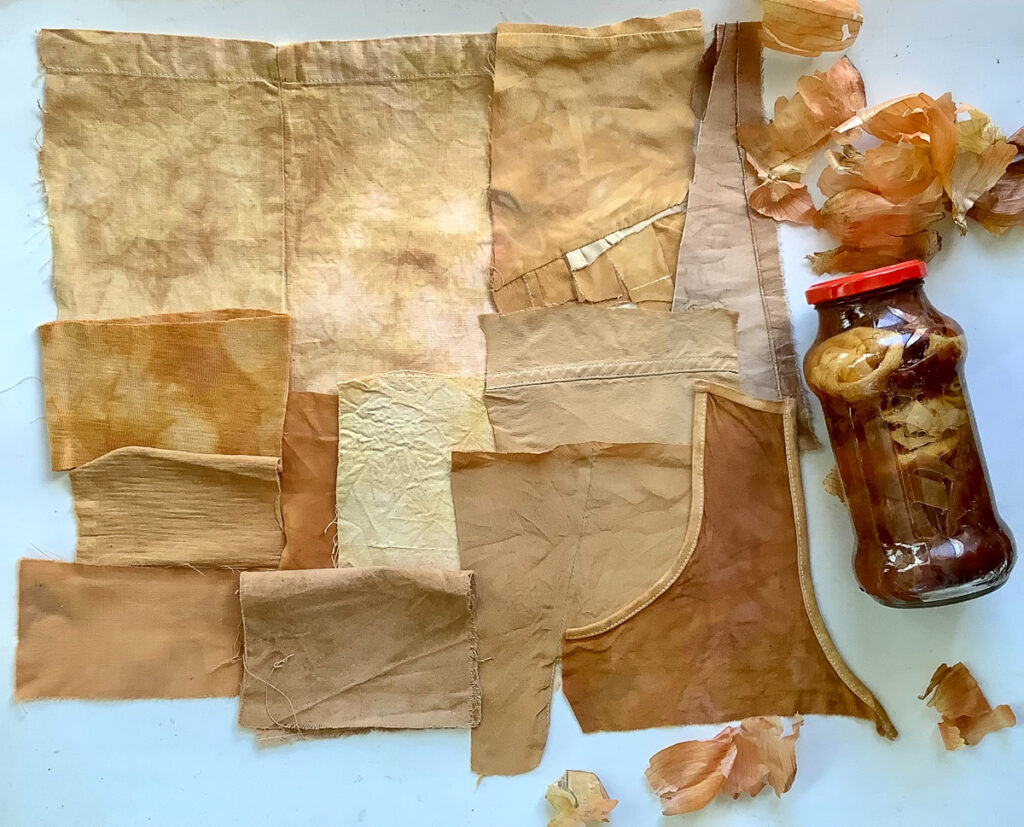 This is the onion skin dye after 3 weeks, cotton, linen, silk and wools are the darkest pieces ready for patchwork.

A jar of red rose petals in white wine that has been sitting in the fridge for over one year. 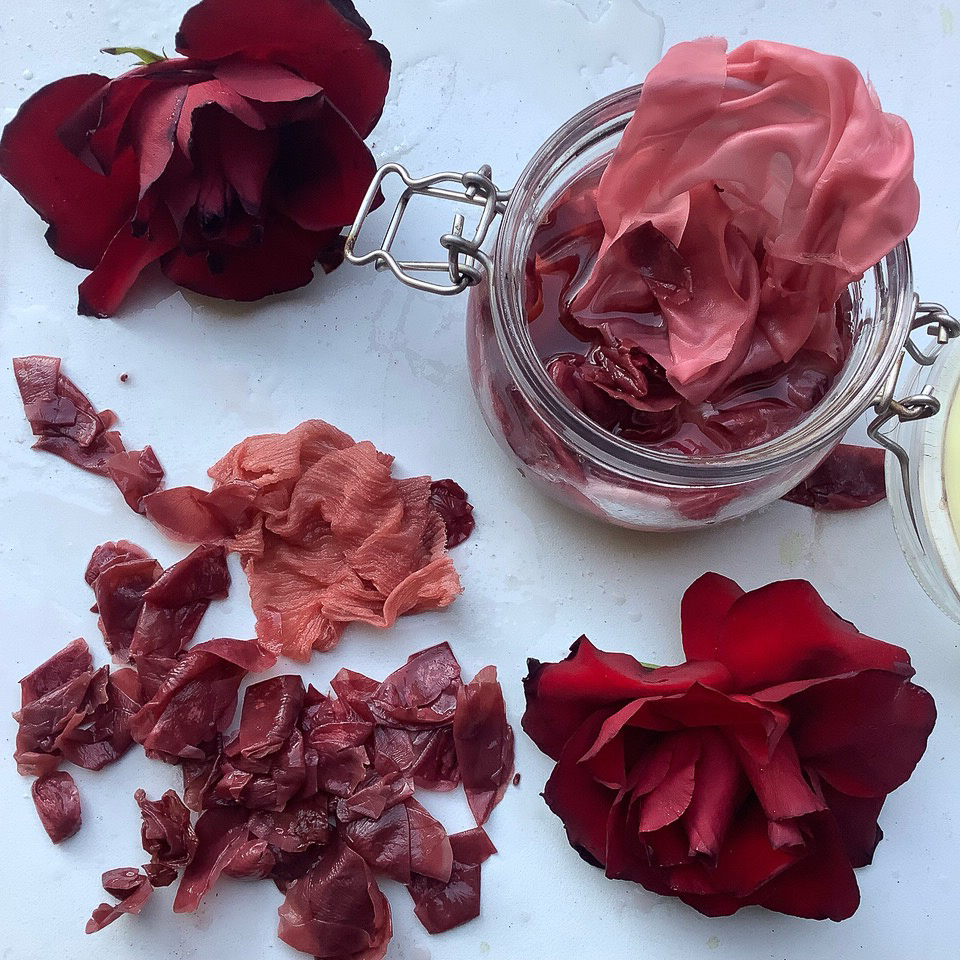 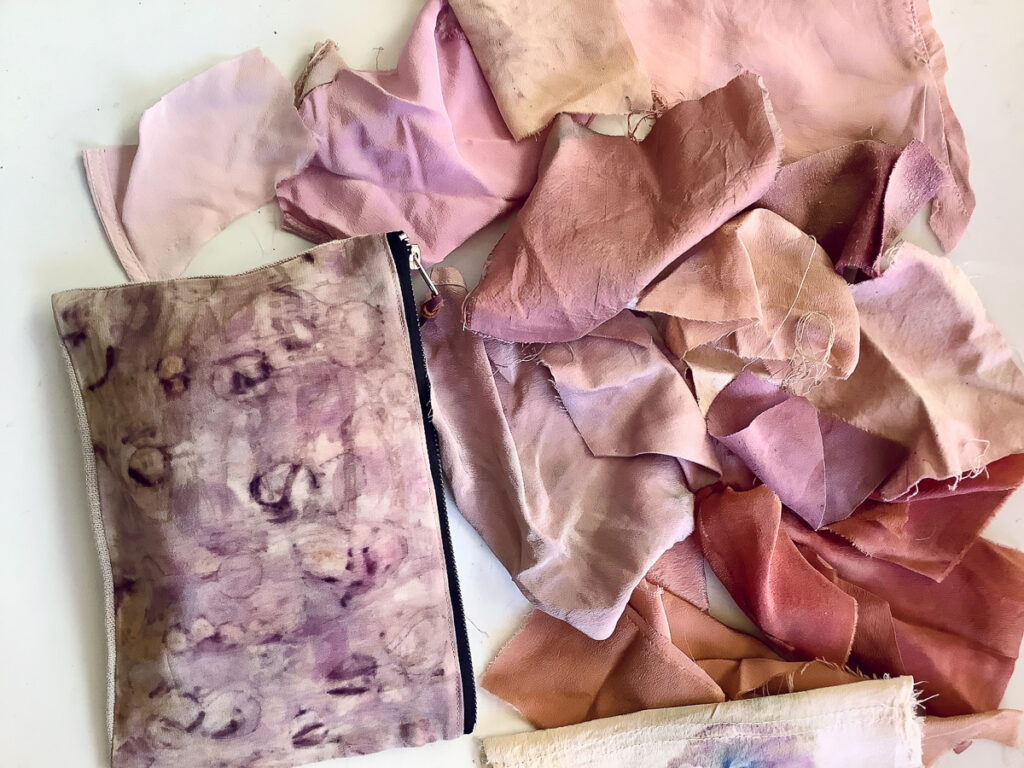 Food waste, skins of passion fruit and rotten berries soaked in white wine for at least one month.
Wash and ironed for patchwork projects 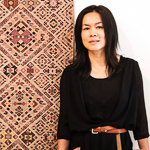 I am a Lao Australian textile designer and weaver living in Canberra, Australia.  I have been dyeing and weaving textiles since 2002 and my greatest passion is working with everything that is leftover or has been discarded by other people. Follow @samorn_sanixay.

The Kam blues: Indigo-dyed textiles of the Kam/Dong minority in China
Made in Indonesia: The globalisation of Indonesia’s footwear industry and the le...
That significant freedom: The idea of Indian Ocean craft
Paula do Prado ✿ My abuela's hands
The gate is open: Guan Wei and Jayne Dyer in China
Devotional flower offerings of Luang Prabang
Sanggar Batik Batara in Baujeng Village
The forest on my flesh