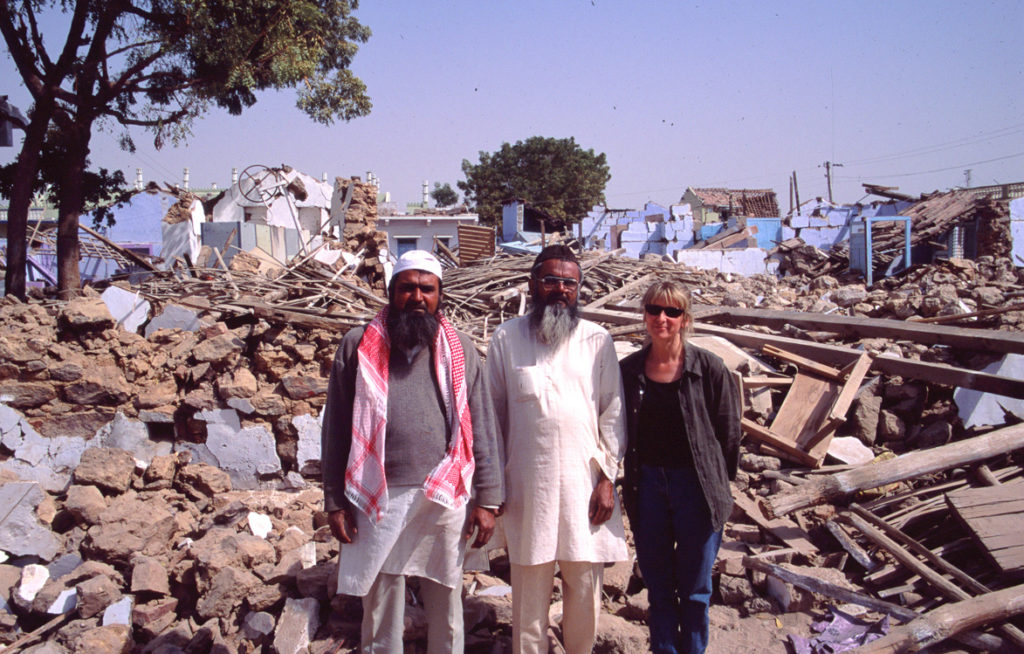 2001. Brothers Ismailbai and Razzakhbhai stand with Charllotte Kwon in what remains of their home after the Kutch earthquake. Through quick fundraising efforts Maiwa was able to provide medicines and temporary shelter for artisans and their families.

Charllotte Kwon and Abdul Jabbar Khatri share their sides of the story about their enduring Indian-Canadian collaboration.

In 1986, Charlotte Kwon opened a shop on Granville Island, Vancouver, where a number of artisans had based themselves. “Maiwa” is a word in both Cantonese and Mandarin used to describe the language through which art speaks. The company worked to promote the use of natural dyes and revive traditional textile techniques. They established a studio in India where staff from Vancouver would work with Indian block printers, weavers and other textile artisans. They now work closely with textile communities throughout India. Besides three shops in Vancouver, they have a School of Textiles which invites master artisans from across the world. 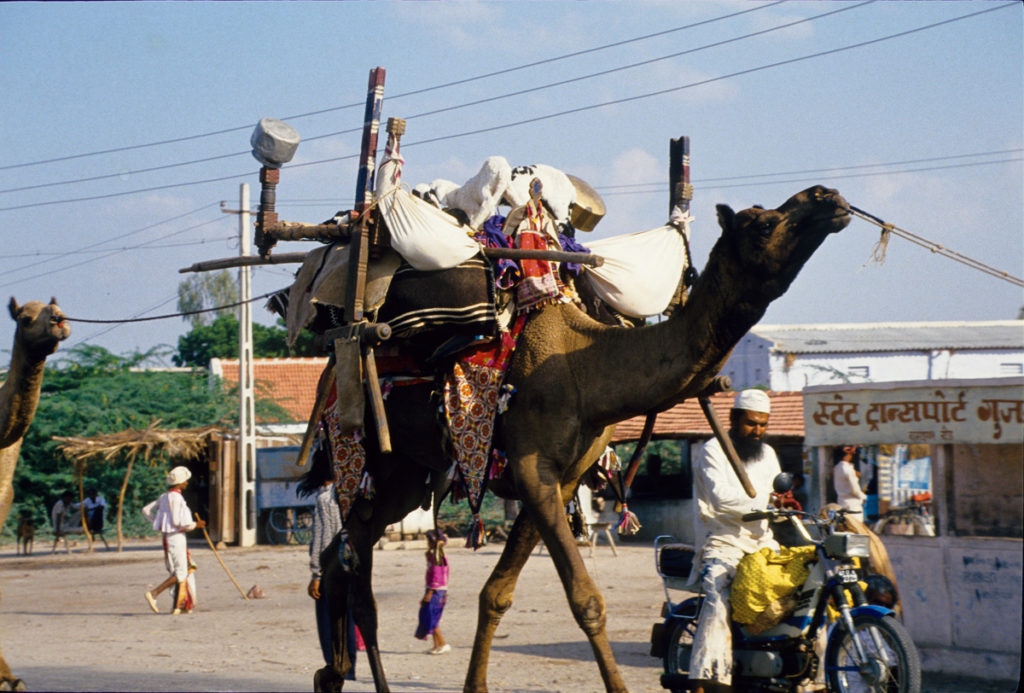 In 1993 I took some photos of the Rabari (fabled pastoralists of the Kachchh desert) on migration. When I took the photo I didn’t notice a man in the foreground sitting on a scooter with a bundle of cloth. In one image he was in motion, in another he was stopped, checking his watch. That man turned out to be Ismail Khatri, who I met later on that same trip, half a lifetime ago.

I didn’t begin my company Maiwa with an exact plan. I began it because there were places I wanted to go and textiles I wanted to see. I wanted to meet people who still made textiles by hand, where skill, knowledge and talent mattered.

All I really had was a gift for organization and a determination not to fail. I could never have foreseen where that would lead me. My first trips to India set certain wheels in motion …

Ismail Khatri, his younger brother Jabbar, and his older brother Razzaque and their entire extended family are just one part of an immense network of artisans that Maiwa trades with. The relationship has moved on to our children, who now work together.

I have often thought that if all the artisans could come together and write a book, or publish a statement about what we all believe, it would be a manifesto for the preservation of craft. Such a statement needs to speak through cloth and colour, through texture and pattern, and call back through time to the voices of previous generations that their skills mattered, that their vision was important—while also inviting in the artisans of the future to express a genius that they are still on the verge of discovering. The language of cloth is subtle, and so this book would have to speak softly … a quiet manifesto. 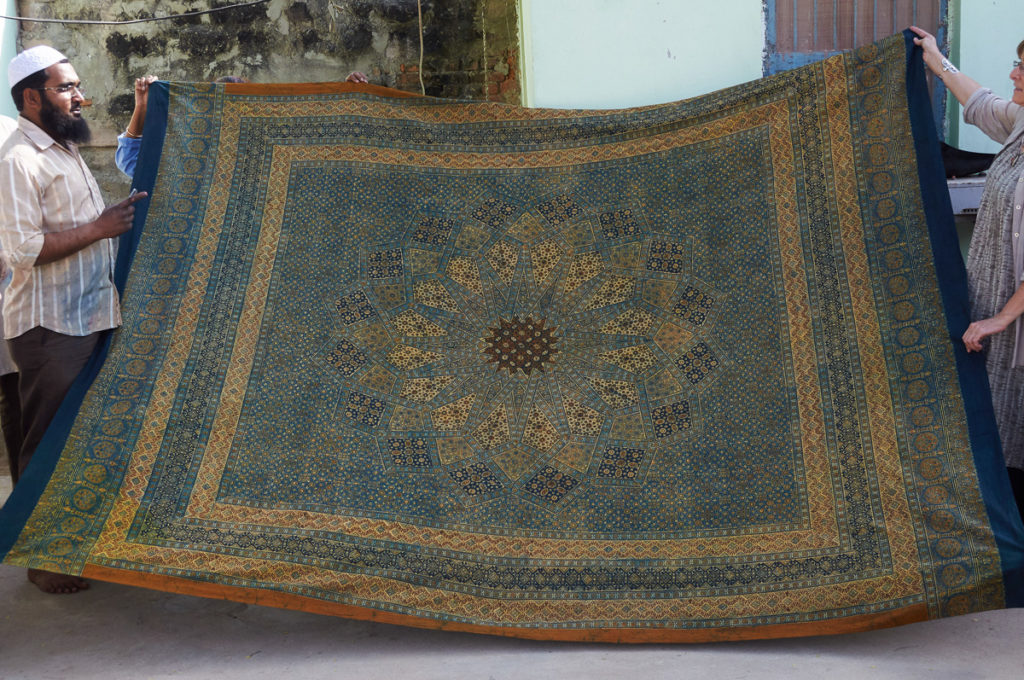 Charllotte had just returned home from India about one week before the earthquake.

Charllotte returned to India, did fundraising in Canada to donate tents for temporary shelters. Maiwa was also working with embroiderers of Kachchh.

After the earthquake Ismail Khatri founded Ajrakhpur. The earthquake shifted local water tables and the block printers had difficulty with iron in the water. The Maiwa Foundation raised money and assisted in dye-works relocation as well as the construction of alternative takes and water treatment.

2007 Razzaque Khatri and Ismail Khatri present workshops and lectures at the Maiwa Textile Symposium (later the Maiwa School of Textiles).

2011 Ismail Khatri and his nephew Adam Khatri participate in the Maiwa Masterclass, a natural dye workshop at the master level conducted in Bengal, India, conducted by Michel Garcia and Maiwa.

2016 Tim McLaughlin visits Kachchh with Charllotte Kwon and produces a series of portraits of the extended Khatri Family.

2017 Jabbar Khatri and his son Adam Khatri present a lecture, exhibition and workshop at the Maiwa School of Textiles

2019 Jabbar and Adam Khatri present a workshop and participate in an exhibition at the Maiwa School of Textiles.

Ongoing: Charllotte Kwon and Maiwa staff visit the Khatris each year to visit, review their trade relationship, place orders and plan for the future. 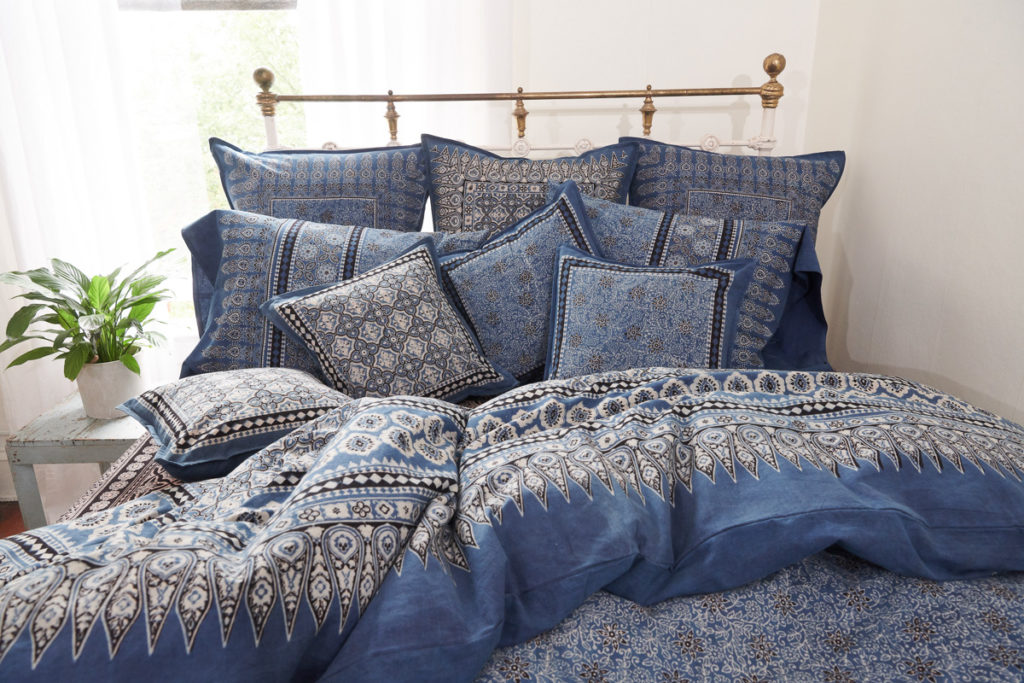 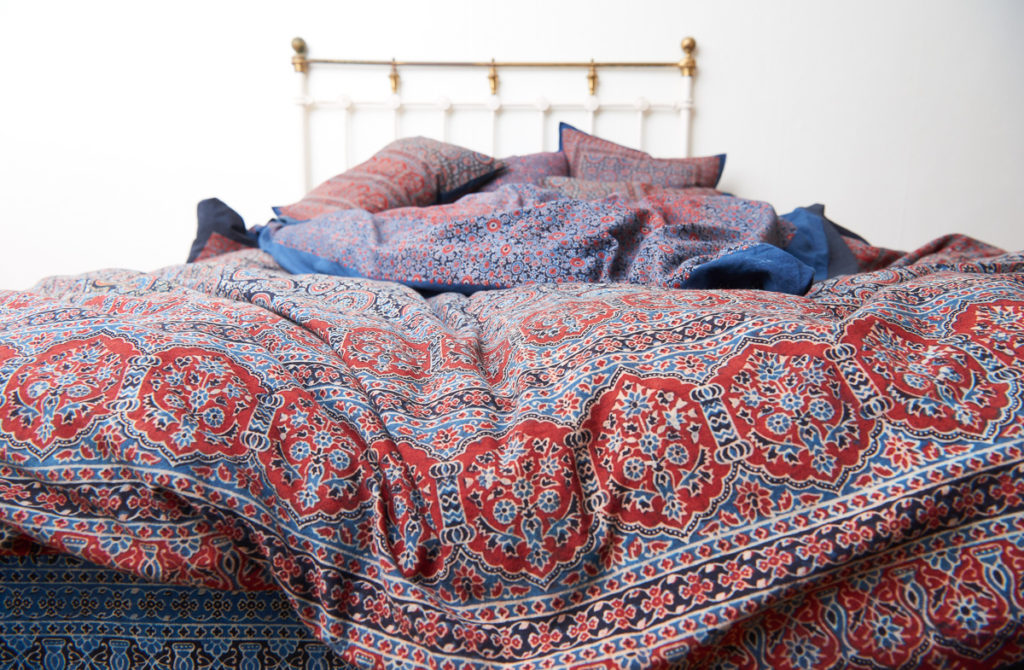 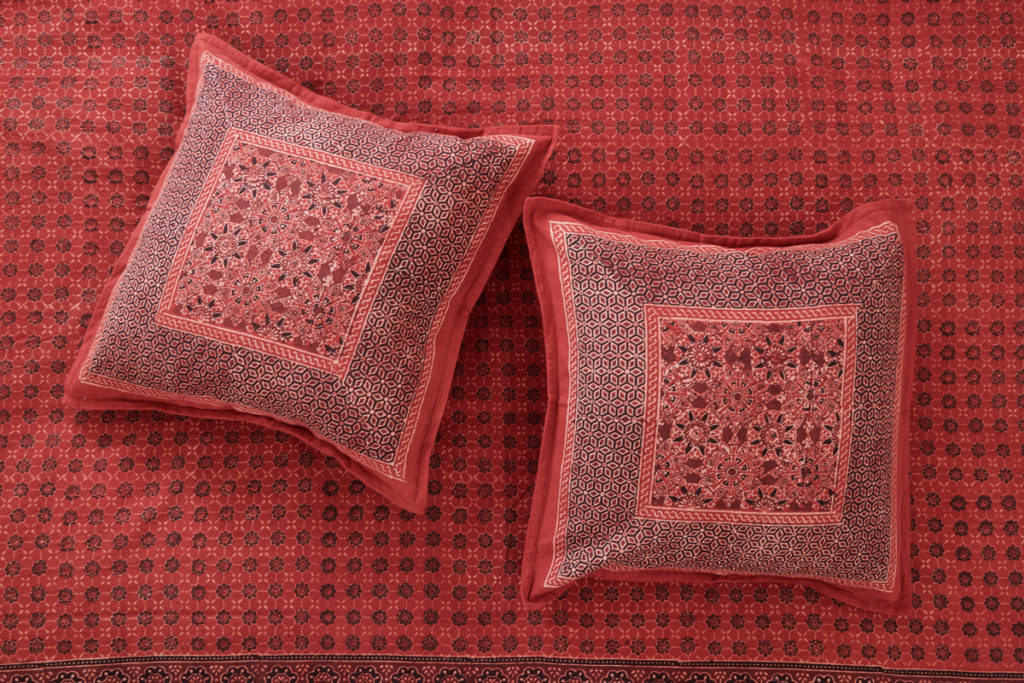 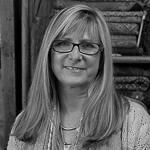 Charllotte Kwon is the owner of Maiwa Handprints Ltd., Director of the Maiwa Foundation, author, and documentary filmmaker. Charllotte travels to India many times each year with additional trips to other countries to supplement her ongoing natural dye and textile research. 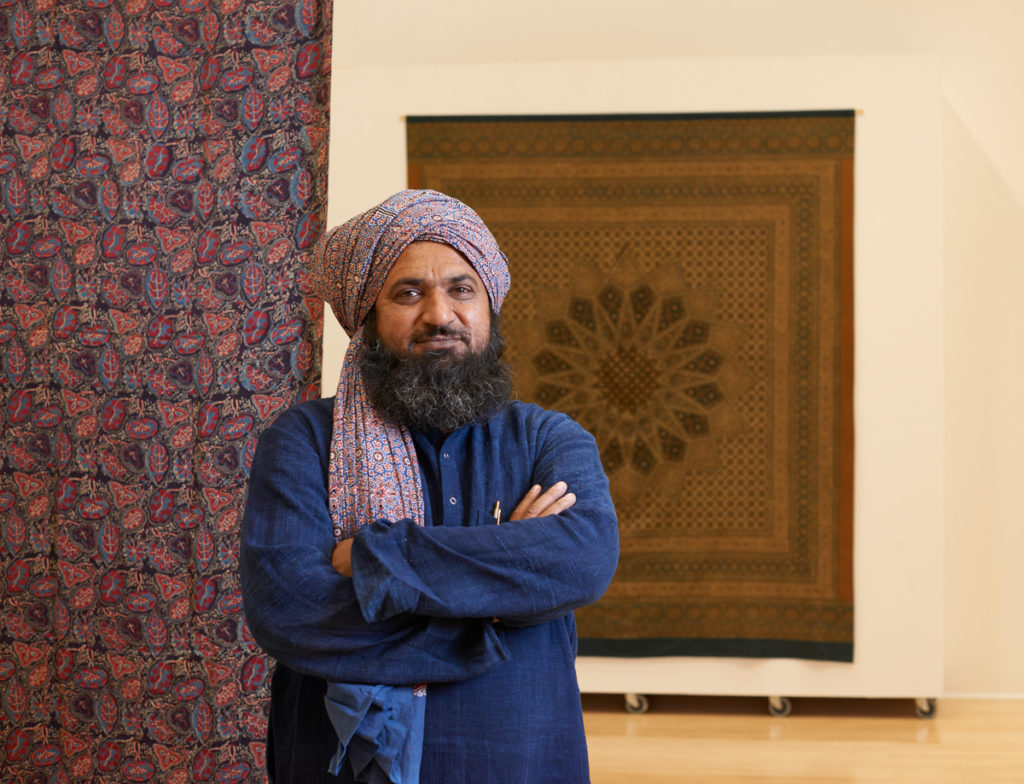 The family of the late Khatri Mohammad Siddik are renowned in India for ajrakh and other block printed textiles made with natural dyes. Their ancestral village is Dhamadka in Kachchh district, Gujarat and Mohammad Siddik’s sons, Abdulrazzak, Ismail and AbduUabbar are the ninth generation of Khatri printers and dyers at Dhamadka. Their sons have followed them into the craft. Interviewed in 2000, Ismail Mohammad shared details of the oral history of the community, saying –

We came to Kachchh from Sindh about four hundred years ago at the invitation of Rao Bharmaljii the first who ruled the district from 1586 to 1631. The Rao gave us gifts of land and we were free to choose where we wanted to build our homes. We also paid no tax. My family belongs to the Dhada subcaste and my ancestor, Jindha Jiva, chose the site of Dhamadka because the River Saran ran through it. A good supply of running water is necessary for different stages of dyeing and washing cloth. Our customers included the royal court and the maldharis, the herders of Kachchh.

Between 1945-50 Ajrakh printers across was practising chemical printing and dyeing due to demand for the less costly fabrics. In 1972-73 Mohammed Siddhik tried reviving the natural dyes for Ajrakh, in turn teaching his sons Rajjak, Ismail and Jabbar.

Maiwa’s first visit with our family was in 1996. During that time Ajrakh was still printed with many chemical dye options like potassium dichromate, ferrous sulphate, copper sulphate. Etc.

Maiwa gave the first order of home linens and also encouraged us to make these fabrics only in purely natural dyes and methods. Thus, started the first journey of pure naturally printed Ajrakh with Maiwa.

During the 2001 earthquake, our family lost our houses, workshops and any remains of entire livelihood. Maiwa helped us during this time by giving us a loan to rebuild our lives. They also send us a personal tent and required things to survive the earthquake. Another time when the water in Dhamadka had too much iron. Maiwa helped us again with a loan to help us purchase new land for good water.

The domestic market still demands Ajrakh to be produced with alizarine and synthetic Indigo for cheaper options. But Maiwa always placed orders for madder and organic indigo in our Ajrakh. In 2007-8, Dr Ismail Khatri and Rajjak Khatri were asked to give a workshop at the Maiwa Symposium in Canada. In 2017 Jabbar Khatri and Adam his son were invited to give a lecture on Ajrakh and give also workshops in Canada. In 2019 Jabbar and Adam were invited back again.

Every year since 1996, Maiwa has been visiting Kutch and our family. Charlotte Kwon was the first person to visit our family. Over the years Sophena and Alex, both children of Charlotte have also visited us. Many staff (Ebra, Shirley Dani, and Amber) are some of the people from Maiwa over the years who have been playing a key role in working with our family. Over the years with the help of Maiwa, we were able to bring new colours to the Ajrakh printing. Madder red, pomegranate, indigo were some of the old traditional colours. Over the years, with the help of Maiwa team, we introduced more natural colours like sappanwood, lac, eupatorium, rhubarb, henna, ratanjot, walnut skin etc. 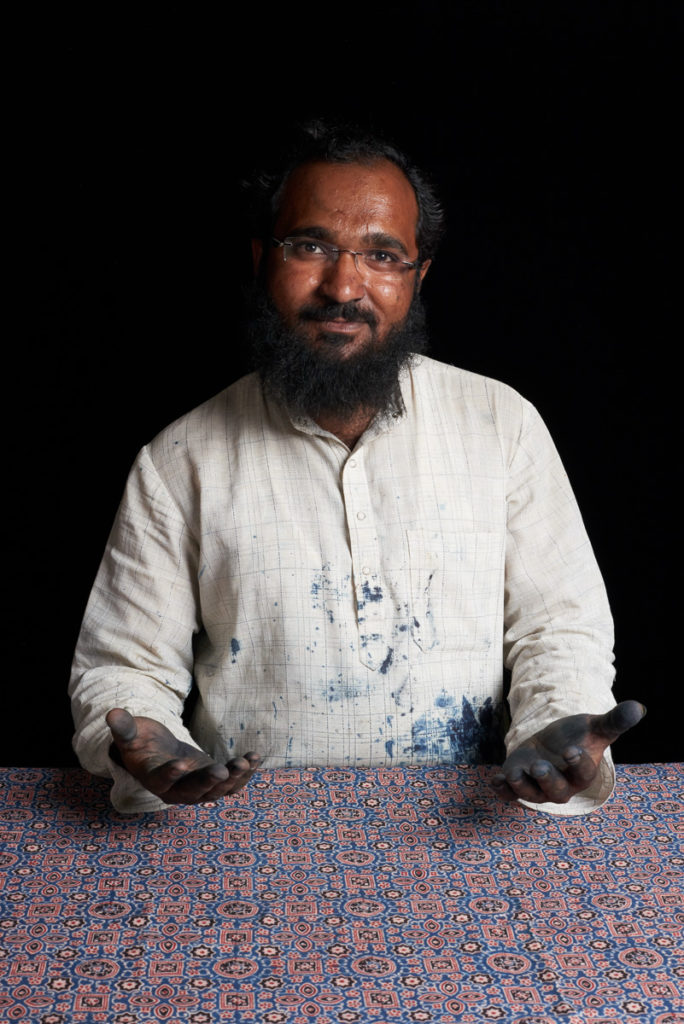 Thanks to Tim McLaughlin for helping compile this article. 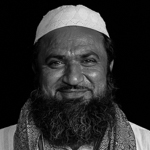 Abdul Jabbar Khatri is a textile artisan based in Arjakhpur in Kachchh, Gujarat. He works with his two sons, Adam and Noman.

Sindhu - The river line: A dialogue
Ryndia silk of the Khasi Hills, Meghalaya
Safed: The beauty of simplicity
In search of the keys: The chola regional over-garment, from the mountains of Hi...
Linda Brescia: Holding Up The Sky
A decade of yarn bombing
Developing fabric designs at Ikuntji Artists
Tender cloths