Lela Kulkarni invents a craft to maintain the glittering clothes that connect her back to family in India.

At the end of June, 2019, I was invited to an aunt’s flat for lunch. In India most households are multi-generational, and food is a time for more family to gather. Thus, naturally, my aunt, her husband, her son, her daughter-in-law, her grandson, and my cousin from another aunt were all there.

I was in India because I had graduated college in May, and I didn’t have a plan for what to do next. I thought the next best thing would be to go on a great adventure as I once did. You see, when I was in my early twenties, I worked on organic farms in Europe. Now in my late twenties, I thought I could backpack through India. Except I couldn’t. I just couldn’t. I didn’t have the confidence, the focus, or will to organize the trip.

When I decided not to backpack around India, there was a halfway solution. I am half-Indian and half my family lives in Pune, Maharashtra, India. Instead of roaming from place to place and looking for stories to write, I decided to spend two weeks in Pune and stay with my aunt and grandmother. Instead of thinking about what to do each moment, I’d be their guest and at the whim of their plans. I’d see their daily routine, walk in an Indo-Japanese garden, and go up many steps to many different temples.

In the apartment off of Ganesh Mala. We sat on the living room floor, scooped the dishes into small blows, and laid others neatly on the big, flat plates. I rested aside the kheer (खीर), the dish my aunt had made specially (almost, scientifically, having called me two days before and asked what sweet I like to eat a lot of).

“What are you doing?” a cousin said.

“I am saving it for later.”

“Oh you want to have it as a desert,” another cousin said.

“All the cousins want to gift you a salwar kameez (सलवार कमीज).” I looked to my favorite cousin and saw her turquoise-green and red knee length cotton top (i.e, kameez), the matching scarf folded in a “V,” over her chest, and her loose pants with tapered in perfectly at the ankles. Her salwar kameez was perfect, in general, and perfect for her.

“Okay, I want one just like Dayatai’s.” Mine, of course, would not be just like my cousin’s. It would have to be made from cloth to fit my body. How on earth would this happen? Would my cousins take me to an atelier in Pune? Sort of.

The following day Dayatai and I went to a store that sold the right amount of fabric and combinations that made for neatly fitted salwar kameezes. Dayatai told me the different names of the types of cloth (warli painting, a design based on the Warli peoples’ geometric art, was her favourite). I studied the whole shop. The bright fabrics were neatly folded and tucked into thin shelves. A woman purchased a richly embellished yellow, silver, and flashy “dress” (Kameez). And people made requests about the specifications of their clothes to the shopkeepers.

“Which one do you like?” Dayatai asked. I pointed to a cloth with mirrors and that had the same colour scheme as her kapde (कपडे, clothes)  from yesterday. The shopkeeper took the bandhani (बांधानी, a cloth that has decorative indents) down and showed us the red cloth to be used for the payzama (पायजामा, pants), the multi-coloured piece for the odanee (ओढणी, scarf), and the turquoise cloth with shiny mirrors to be used for the main kameez (कमीज, top). Dayatai eyed the mirrors suspiciously.

“You don’t want the one with the mirrors. They might fall out.”

“You are quite good at stitching.” Yes, maybe I would become so good at restitching fallen mirrors in I could work at atelier for a Punjabi clothing line. Well, Or maybe not. I’d find out.

And then the next morning came, the grand morning where I entered a real-live atelier, my aunts called it Snehel’s boutique. Sneheltai is my other cousin, and the place that I was about to enter was a shop where they custom-made her garments.

With my aunts at both my sides, we three explained in Marathi and English what we wanted done with the various pieces of cloth I and Dayatai had chosen. The seamstress/artist/shopkeeper nodded and sketched out necklines on the order form.

“The one you want is very plain,” she said, “Everybody has that.” Then she drew a “v” neck where the right side was longer than the left and enhanced it with a gold border. The gold border, she explained as she sketched, would continue down the front in an asymmetrical fashion to balance the unique neckline.

“That’s perfect. That’s what I want.” I replied.

With my heavy western clothes on, I stood in front of a mirror, and a man came downstairs. He measured me with a tape and called out the numbers to the shopkeeper. The shopkeeper then, with mental math, converted my measurements into the actual measurements that the sleeves, the pants, and the shoulders needed to be. Yep, I was in the hands of artists, but the art was a type of clothing, my family members wore daily.

A few days later, I came back and put on the immaculately-fitted clothing. I twirled in the mirror and looked to the shopkeeper beaming over her work.

“Do you sew by hand or with a machine?” I asked.

“We have to do both. It depends on the design, how complicated the piece is, and the material.”

That night I twirled at my sister-in-law’s apartment as she taught me how to dance, a festival dance for Navratri (नवरात्री, the celebration of nine goddesses).

“Very good,” she said joyfully, though I wasn’t at all good at it. I smiled and twirled so hard I could picture all the mirrors falling out. But they stayed in. Later, back home in Providence, RI, a mirror (as if almost by luck) fell out right next to my sewing supplies. I sewed small loops around it and strung the loops together; thus, having secured it back in place.

My boyfriend came over. 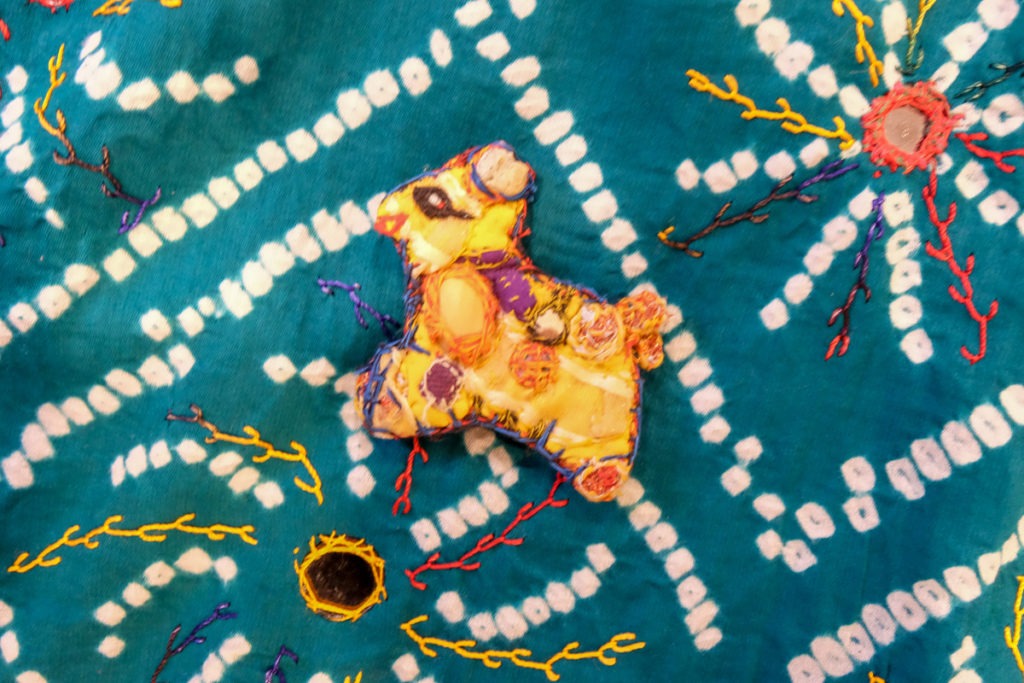 “It’s just like the pistachio dog,” I said as I showed him the mirror I had sewn in. Pistacho dog was what my boyfriend called the little animal I made with a pistachio sewn on its back. To sew on the pistachio, I had to make loops around the pistachio and string the loops together. I later used the same method to sew in the mirror on my kameez.

We both smiled. Perhaps, I would make an atelier in my own living room after all.

Sometimes confidence, focus, and will can be so fickle like mirrors which stay put while dancing but fall out while sitting on a shelf. Sometimes confidence, focus, and will be so much a part of your personality you feel like you were born with them. Other times, they fall off, and that’s okay too. That doesn’t mean you’re damaged. That means, perhaps, you’re more vulnerable.

At least for me, that’s what it meant. I made me want to tend to myself, tend to my relationships more, and drift less. This is why in India I spent most of my time tending to my familial relationships.

I feel one-of-kind having these custom, traditional clothes. The day I graduated a woman in a sari walked by my brother, his partner, and me. “How beautiful,” I said. “Sari’s are so beautiful because they carry stories,” my brother explained. It’s not just about the way something looks. When clothes are made to fit you and also your family’s traditions, they are beautiful on the inside.

I wear the clothes often. It’s kind of odd, but I wear the kameez as a dress. I wear it with leggings (cotton leggings in the fall and wool leggings in the winter) when I go out to eat, to the movies, and to free art events. I fold the scarf (odani, ओढणी) the same way I saw my aunt fold hers—where both sides evenly dangle down my back, and the front forms a tight V.

When I do yoga at home I wear the pants (payzama, पायजामा) and a t-shirt. Since the pants are comfortable and fit me seamlessly, I don’t trip over them or feel constricted. There hasn’t been an occasion where I have worn the pants, scarf, and dress together even when I go to the temple I wear the dress with leggings.

A part of me is shy. A part of me thinks I should get an iron and press everything before I wear them to an event. A part of me has to get over that, though, because I plan to wear all three on the Marathi New Year, which is March 25th.

उपहार - Uphaar
Ulaṭbānsi / Zigzagging: Filming the spirit of weaving
The Shadow Theatre of Anaphoria Island
A kirpan for bride power
The rare art of Mumbai's Parsis
Sky's the limit: The Cultural Textiles Rug Project
How Jewish embroidery is sustained by an Indian Muslim
Mata & Grifo: Portals into a Sicilian love story