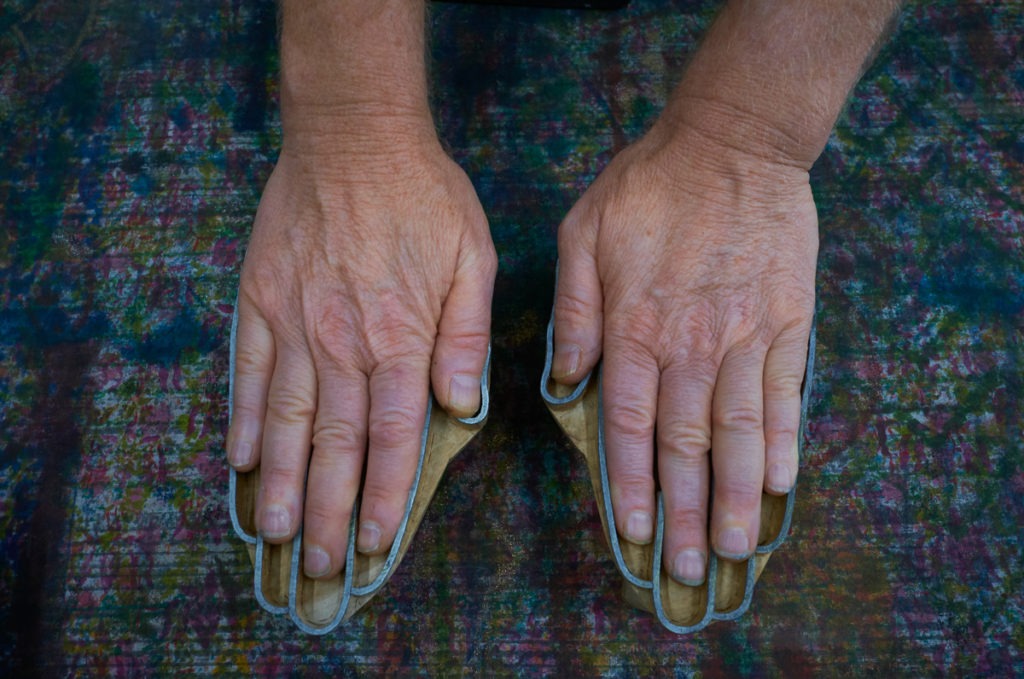 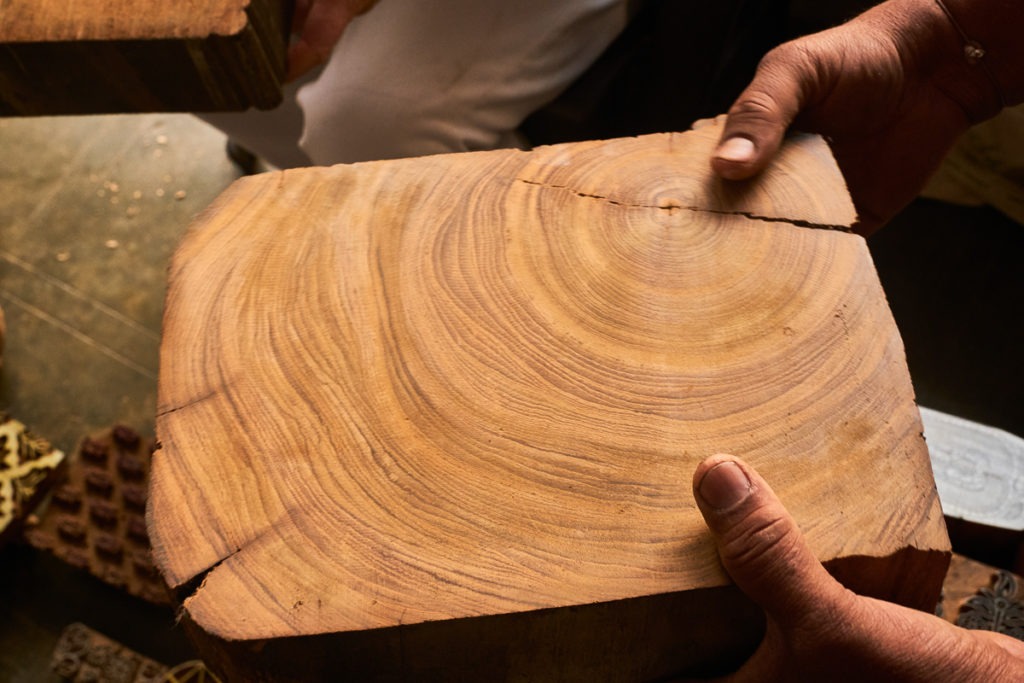 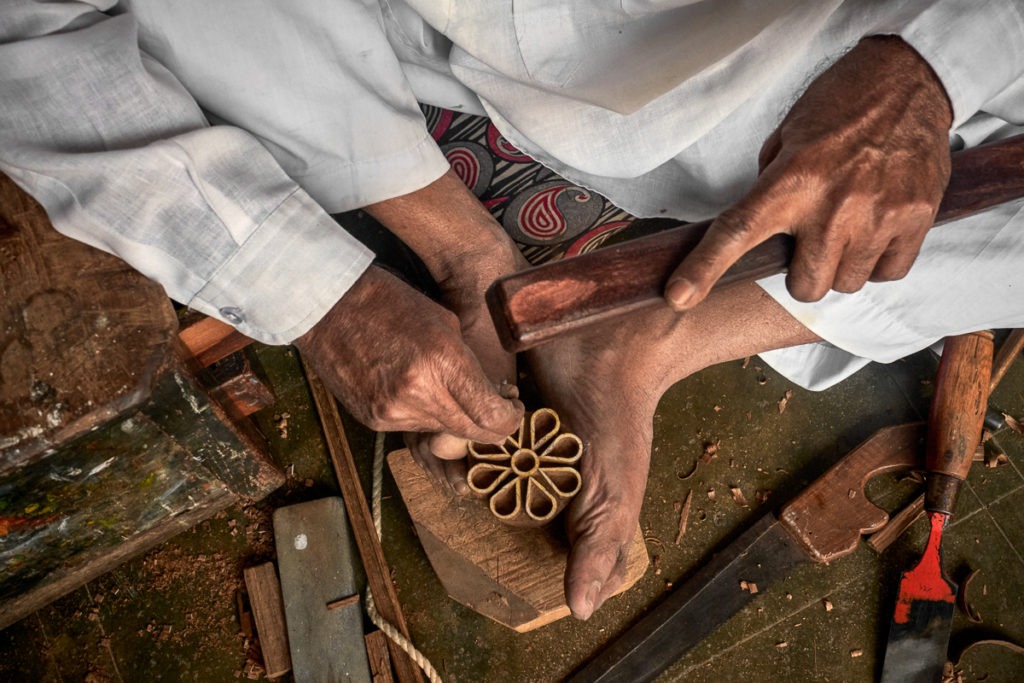 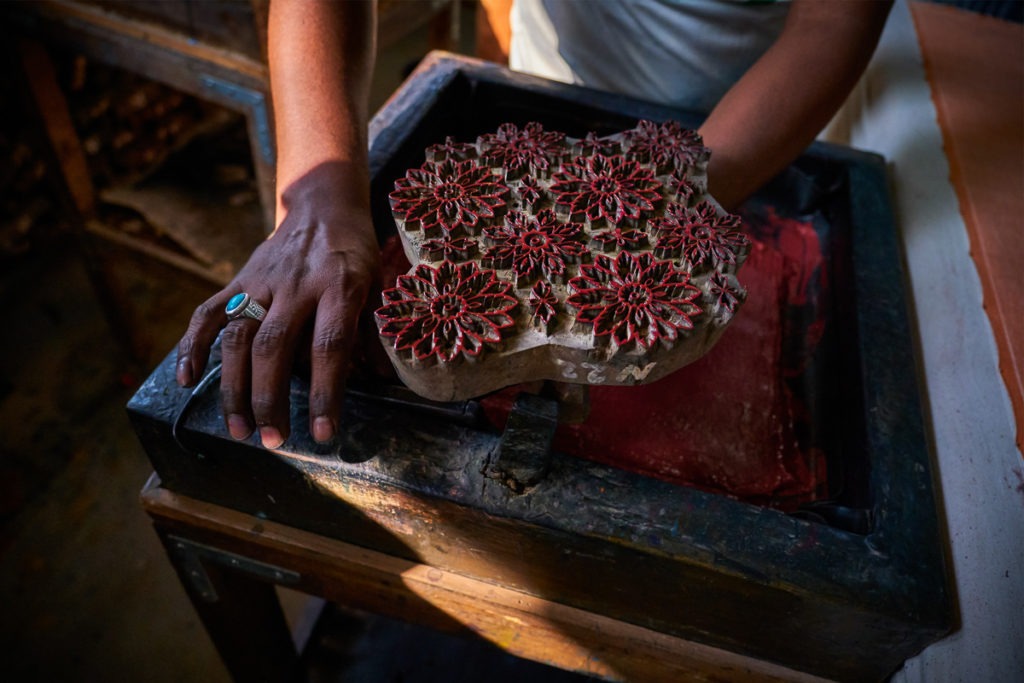 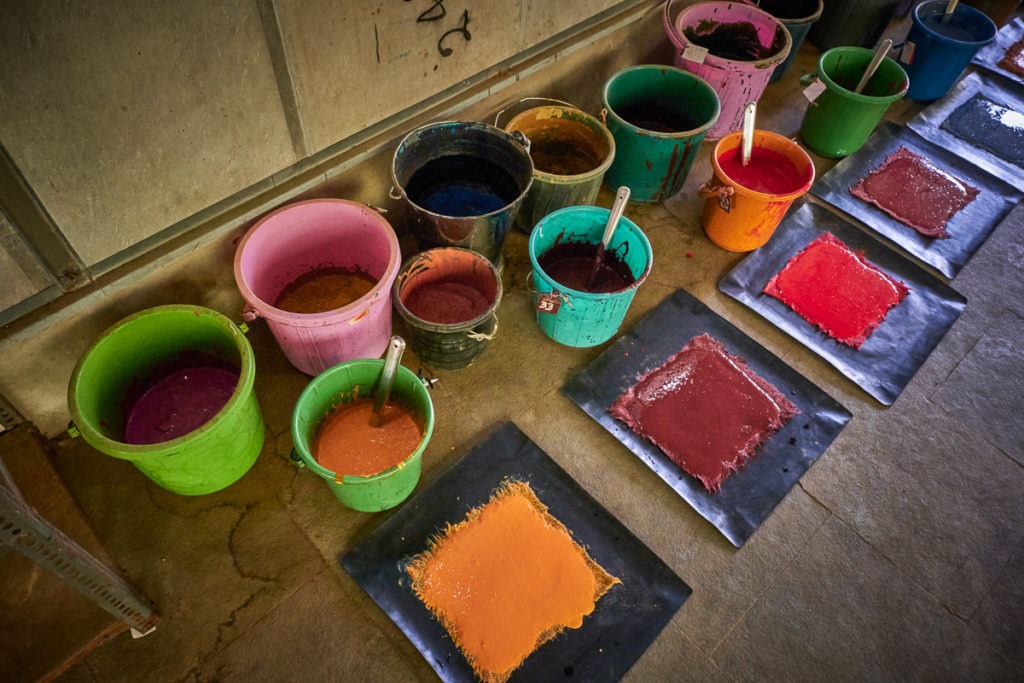 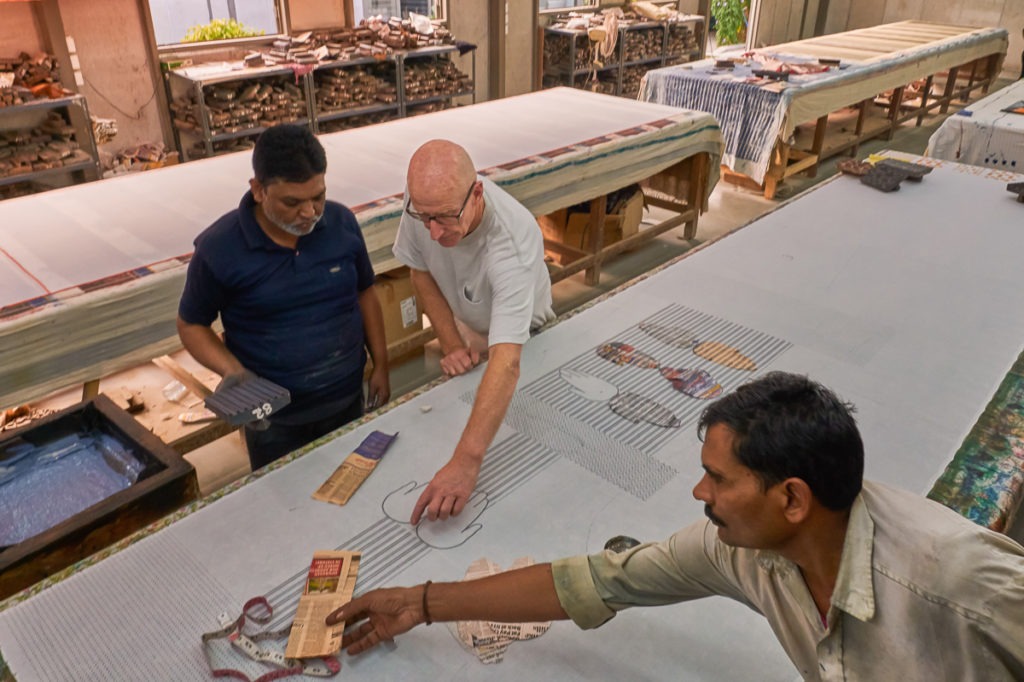 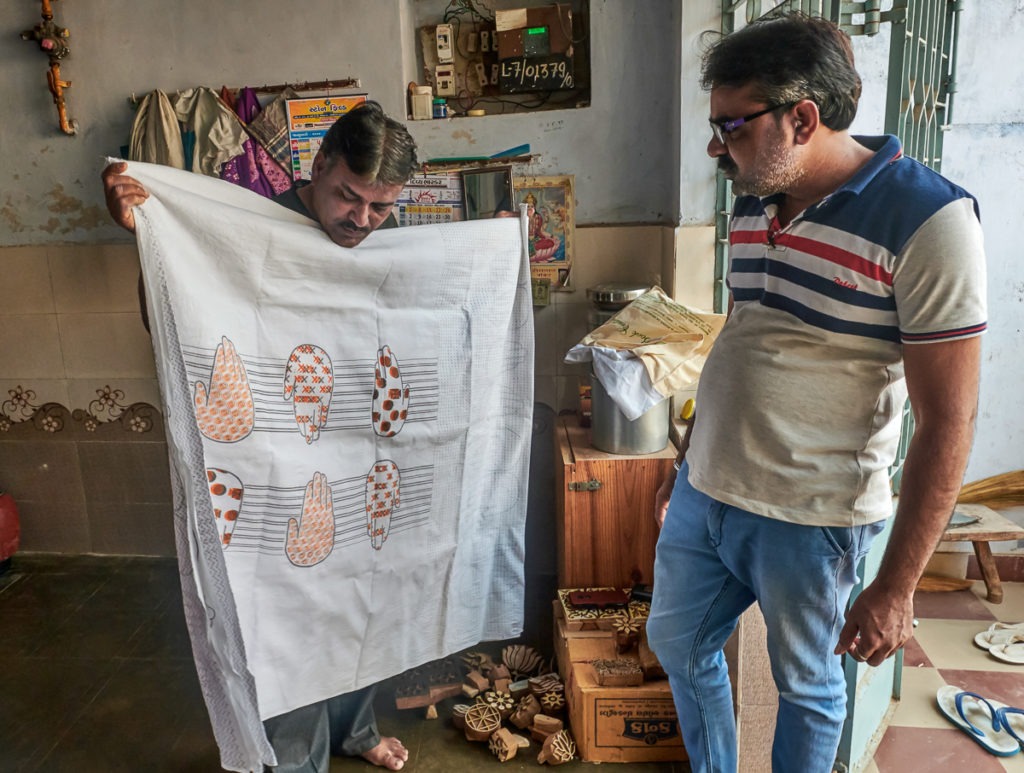 After lentils in Brunswick with LOkesh Ghai, Alasdair Mackinnon and Eddy Carroll are inspired travel to Ahmedabad and make a new range of hand-printed products that match hand and eye.

The thought that we might be working with artisans in an Indian block-printing studio would have seemed like a remote possibility if it weren’t for meeting LOkesh Ghai (@ghailokesh). LOkesh is an artist, designer, academic and educator based at the National Institute of Design (NID) in Ahmedabad.

We were introduced to Mr Ghai in our store, The Boroughs. While visiting Melbourne in 2019, he brought in a copy of his “Mills” project book for us to see. We were intrigued, equally by LOkesh Ghai and his hand made fabric book and from here a relationship grew that took us to his adopted city, Ahmedabad, the old capital of Gujarat in India’s west! Ahmedabad’s rich textile history, with the influence of Mahatma Gandhi, led the way to India’s independence. Textiles drying on the banks of the Sabarmati river feature in photographs by Cartier Bresson.

LOkesh understood our store’s role in promoting and representing the products, ideas and careers of local creatives, something he is also doing with the artisan community of Ahmedabad. During a dinner at his favourite Melbourne restaurant, Lentil as Anything, we were asked to join him in India to undertake a project in his community. This was to be a collaborative project providing artisans with visibility and acknowledgement for their intelligence and skill.

Designers and fashion houses often visit Ahmedabad to have textiles created by the weavers, printers and hand finishers found in the city. Too often artisans are rendered a back story to the final product, the studio goes unseen with more focus on photo shoots of the environment of Indian streets and markets, romanced as an exotic travel locale.

A plan was formed, we would travel to Ahmedabad, LOkesh would introduce us to artisans he wanted us to work with, we would create work together, start a dialogue and develop an exhibition showing the results both here and in India.

We asked our friends, Jessie DiBlasi and Robe Gale, both documentary photographers, to accompany us and record the people we met and the places we worked in. We were also interested in their eye and take on the city Lokesh has grown to love and share.

Both Eddy and I have a history with screen-printing yet neither of us had ever produced a textile print from a wooden block. We were fascinated by the process. We thought it was a good place to start our project.

And so we begin a relationship with Parijat Studio. Located on the edge of the Sabarmati river, on Ahmedabad’s city limits in the village of Hansol.

Parijat is a tangible expression of compassion, compassion for the livelihood and tradition of block printing. Established 20 years ago by Paulomi Lalbhai, the studio sits on the same land as her family home. Paulomi was moved to act when a local block-printing studio approached her to rescue them from foreclosure. Declining use of traditional block-printing methods due to cheap imitations on imported fabrics has forced many studios to fold. She had a purpose-built printing studio built, including facilities for fabric preparation and the making of print medium. The focus is on sustainable practice with studio buildings using solar power. Studio manager Prakash Prajapati has worked with Paulomi since 1995. All projects are ushered through the studio in his patient and experienced hands, often anticipating our needs before we realised what they were!

Things moved fast, we bought Khadi cloth from, Handloom House, initiated by Gandhi, and took it to the studio to be washed and prepared. By day two we were printing.

Both Eddy and I approached the process differently. With playful inclusivity, Eddy sought the printer’s input into the final design: they made decisions of their own about the placement and selection of blocks in her garland design. Eddy chose to work with blocks and motifs already available at Parijat Studio, bringing the studio and its history into her work. I commissioned a block from Satish Bhai, son of master block maker, Govind Bhai from Pethapur Village, a simple outline of my hands, to be filled with designs from Parijat.

For my part, I had been researching the image of the hand in Indian art. This as a motif that I could incorporate into a design, a concept developed about hands and eyes, hands and eyes working together.

Between developing our project and meeting members of Ahmedabad’s artisan community we also became enmeshed in Lokesh’s wider network of close friends, artists, writers, teachers and students all of whom shared their lives in Ahmedabad making us feel connected, welcome and at home. This story ends with the words, ‘ to be continued…’

The experience transformed us from artists visiting to research Ahmedabad’s textile history and to create textile works, to being accepted as part of a community. A community whose stories we are grateful and humbled to be a part of telling.

When the India/Australia “Hand-Eye” project is exhibited, Garland readers will be first to know.’ 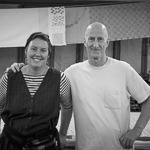 Eddy Carroll (@of_wild_patience) and Alasdair MacKinnon (@social_fabric_project) are Brunswick based artists. Both work in textiles. When they aren’t in their studio, they manage a community-focused design business called The Boroughs Store. Together they navigate commerce and art-making on a daily basis. They have just spent January in the city of Ahmedabad, Gujarat, India.