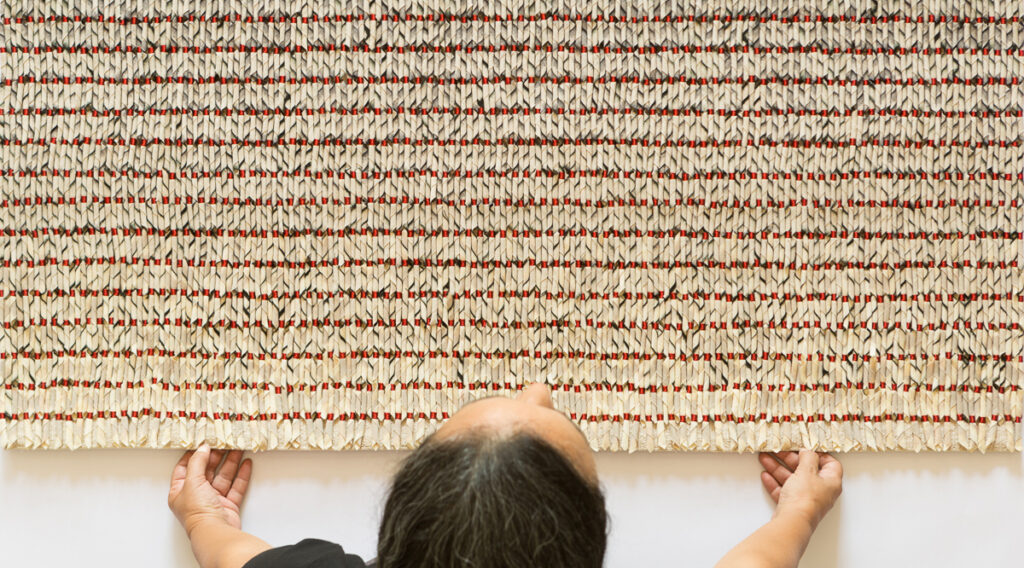 Paola Moreno’s modernist weaving is inspired by the many strands of Chilean culture, including precious textile relics of its ancient Inca past and the passions of Violeta Parra.

In some ways, Chile is an island. It is separated from its continent by the Andes mountain range and the rest of the world by the expansive ocean to the west. Culturally it has a unique mixture of Spanish and indigenous, combining Quecha and Aymara to the north with Mapuche to the south. And historically, it has suffered political isolation during its long dictatorship under Pinochet. This isolation has fostered a distinctive creative culture that is little understood by the rest of the world.

I first travelled to Chile for the South Project in 2005. As an Australian, I immediately related to the defiant way they spoke of Chile as “fin del mundo” (end of the world). Here was a republic that had embraced its place in the world. But this was not without struggle, which continues. For me, the Chilean textile artist Paola Moreno was an inspiring example of its mix of cultures, politics and crafts.

Paola Moreno studied textiles in the 1980s, during the Pinochet dictatorship. It was an oppressive time when Chile was quite isolated from the world. But it was also a period when studio textile art developed, which offered a means of engaging with Chilean culture unlikely to attract attention from a repressive regime.

Paola learnt textiles from the leaders of this generation. This included dyeing from Inge Dusi, weaving from Paulina Brugnoli, and studio practice from Isabel Baixas. Later she worked in the studio of pre-Colombian textiles with Paulina Brugnoli and Soledad Hoces de la Guardia. 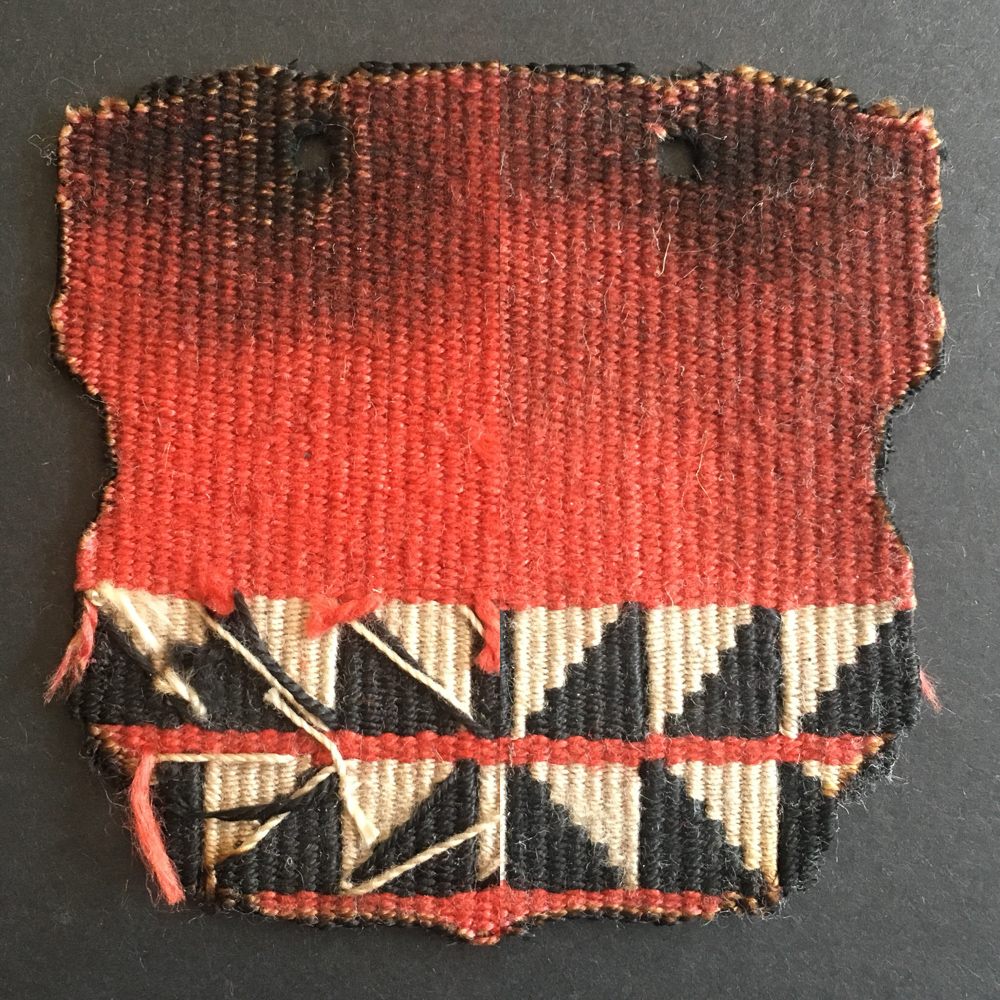 After a period as a commercial designer, Paola returned to artistic practice. Her palette of white, red and black was influenced greatly by Inca textiles. But rather than simply copy these ancient works, she reflected the fragility of their heritage by reproducing the damage caused by time, including fire. Textiles could not only recover lost cultures, but also witness their destruction. She is impressed that the pre-Colombian people would say,  “Better to burn the textiles before the Spanish take them away.” 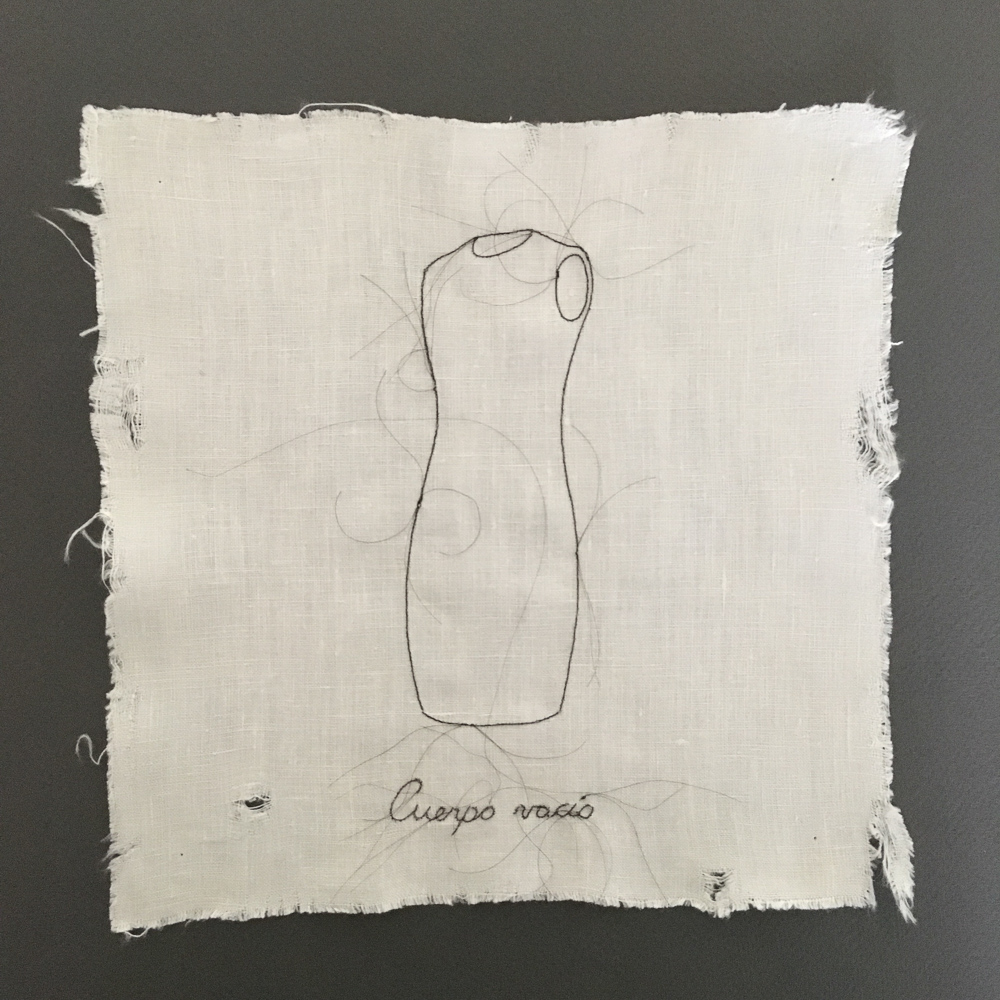 Paola was one of the first Chilean textile artists to work with hair. One reason for this was to express the value of time that is dedicated to weaving. With time, she also began to leave loose thread at the end of her textiles, like hair growing from her works. 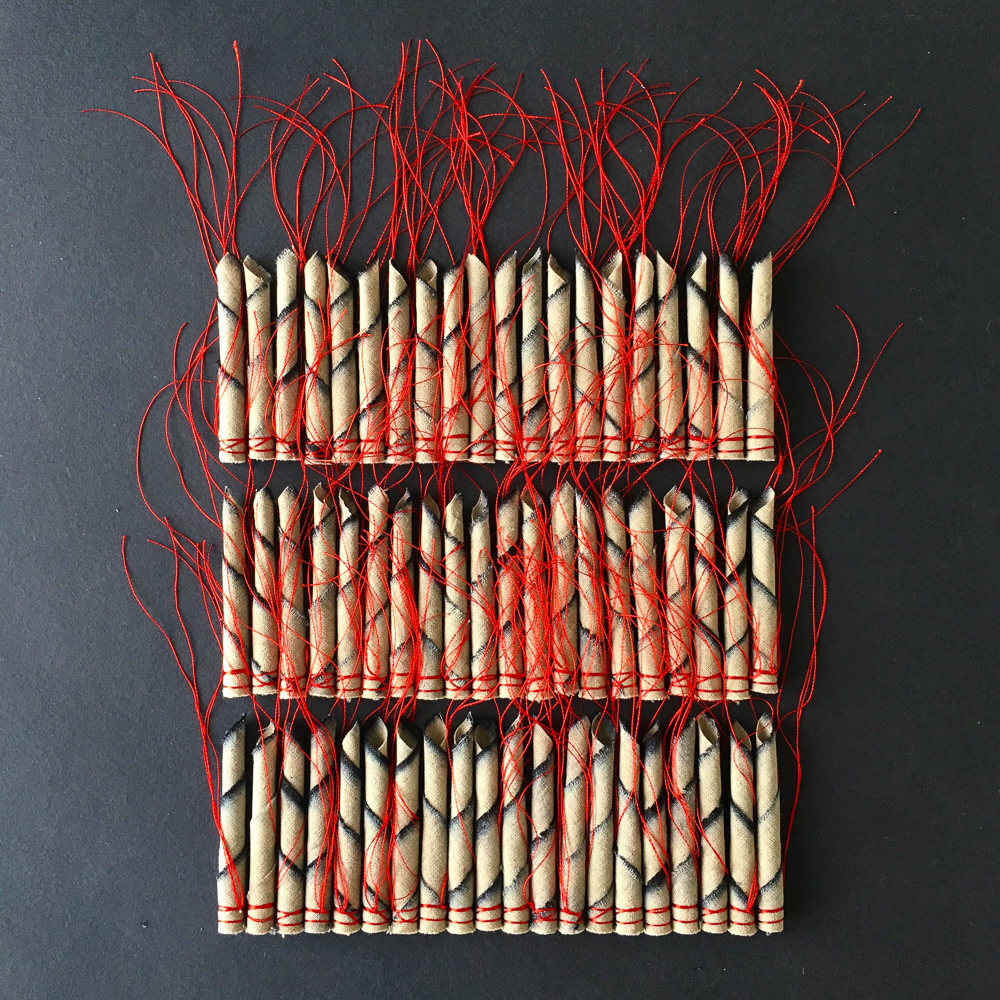 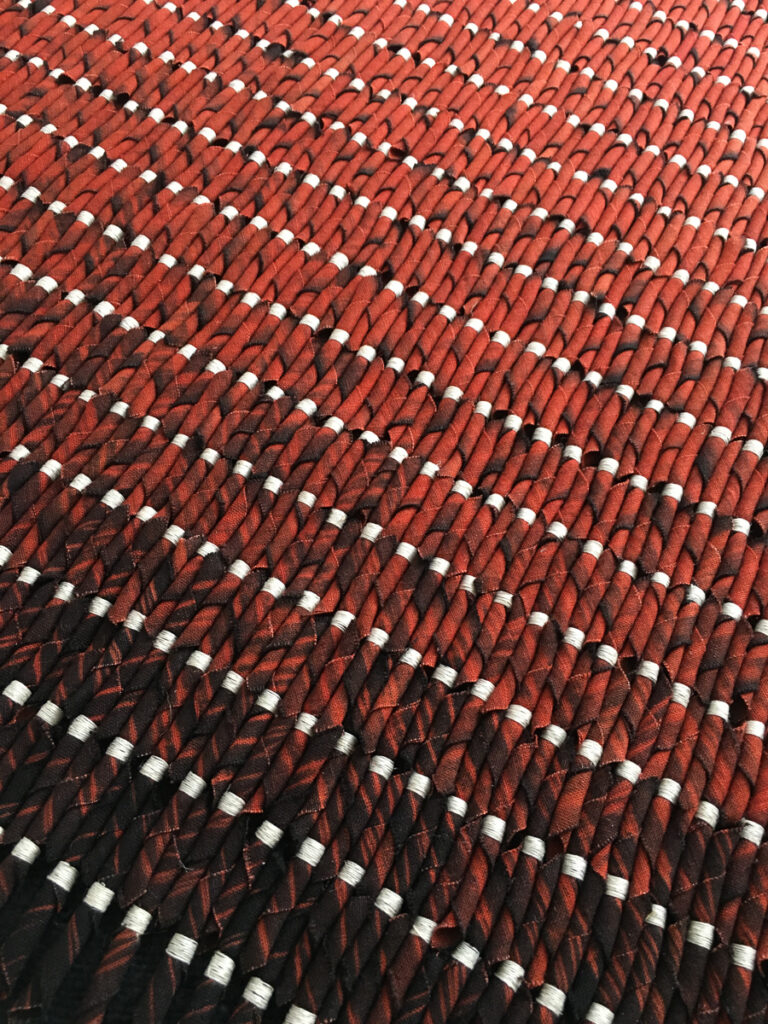 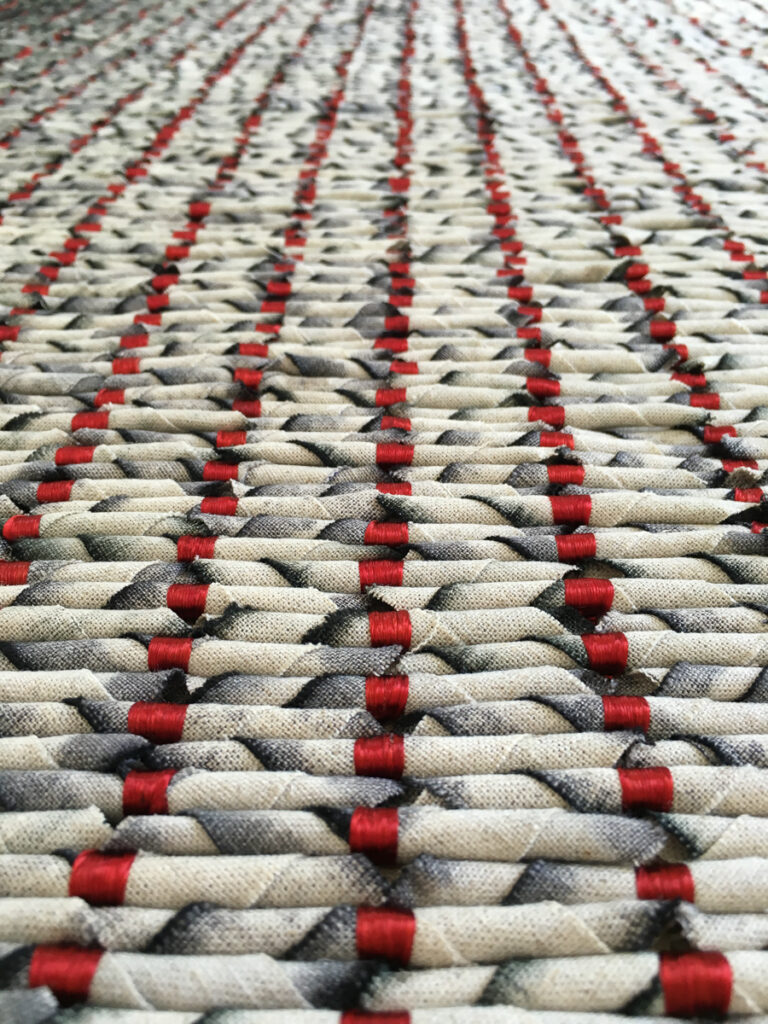 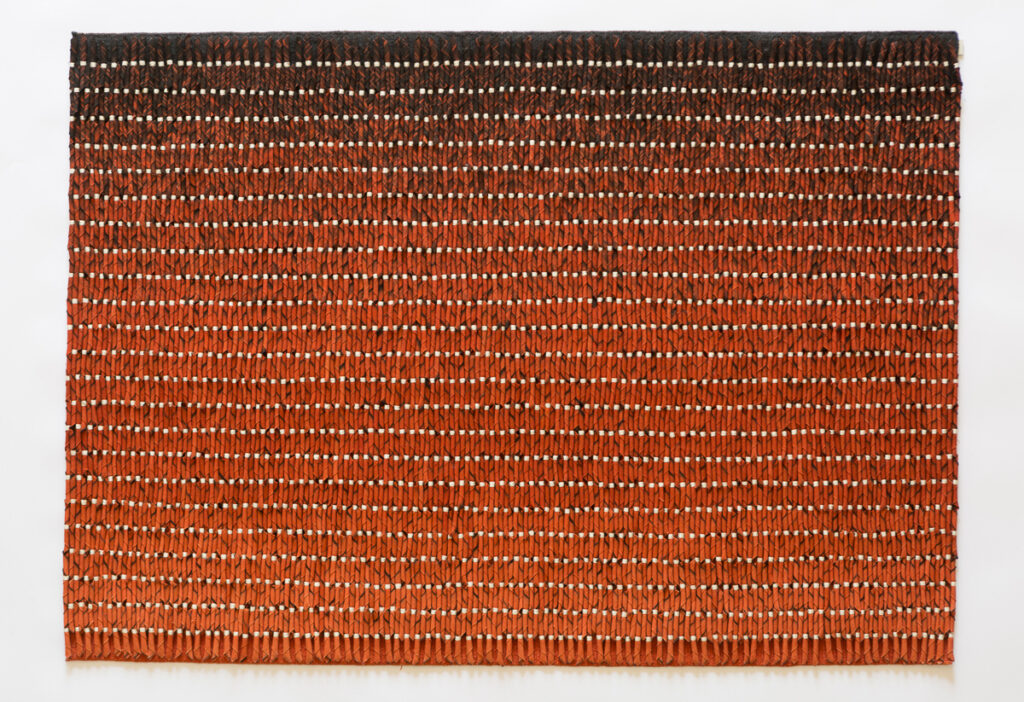 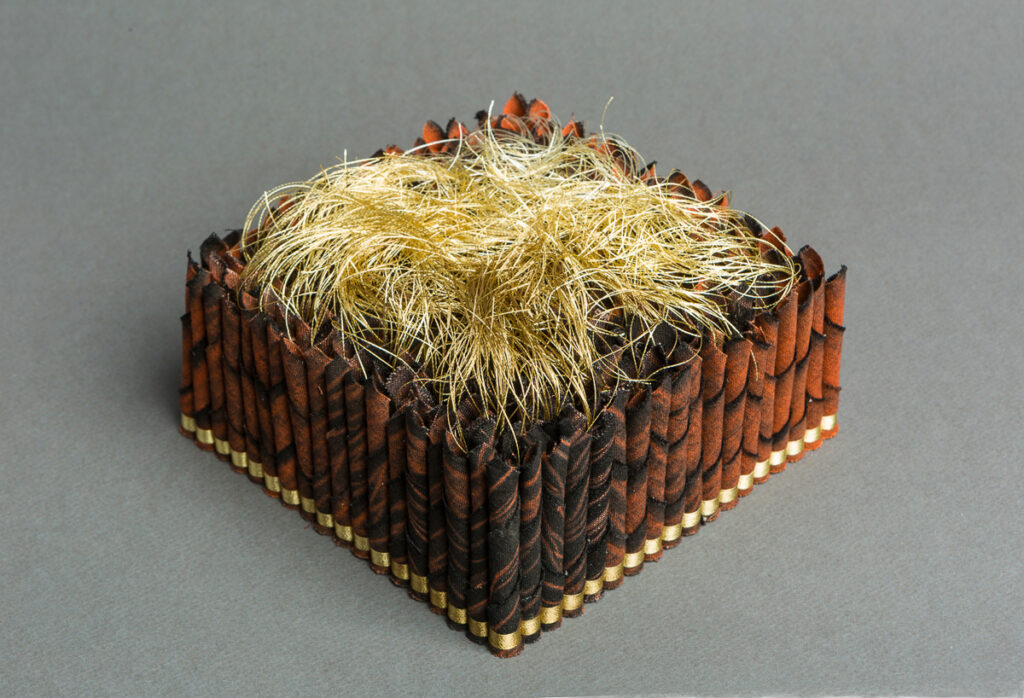 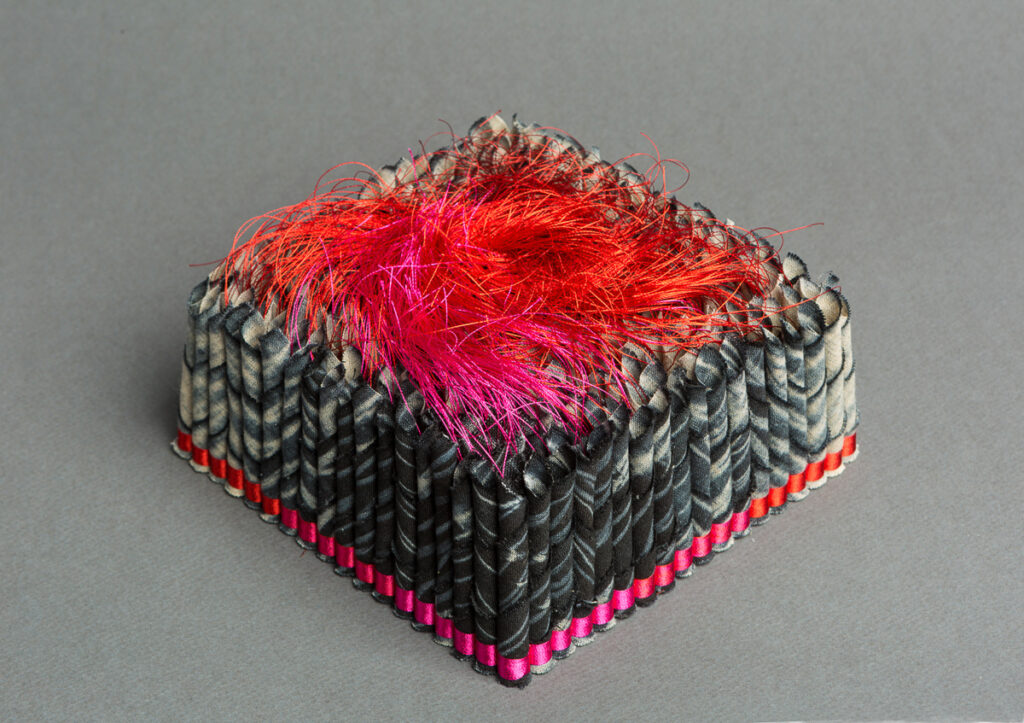 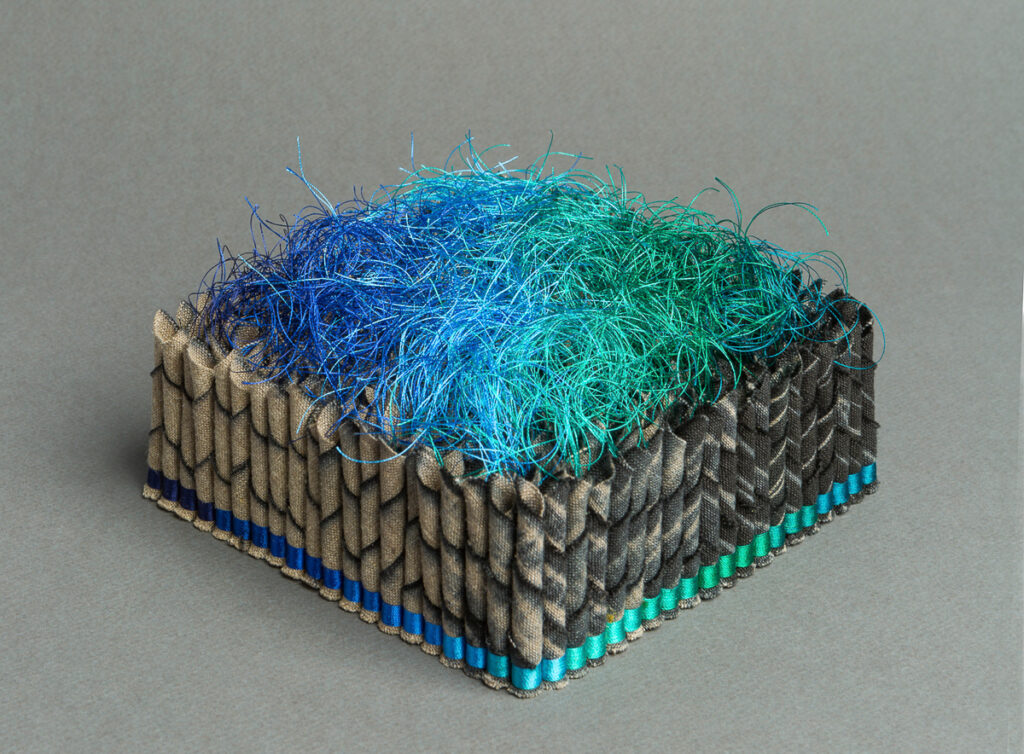 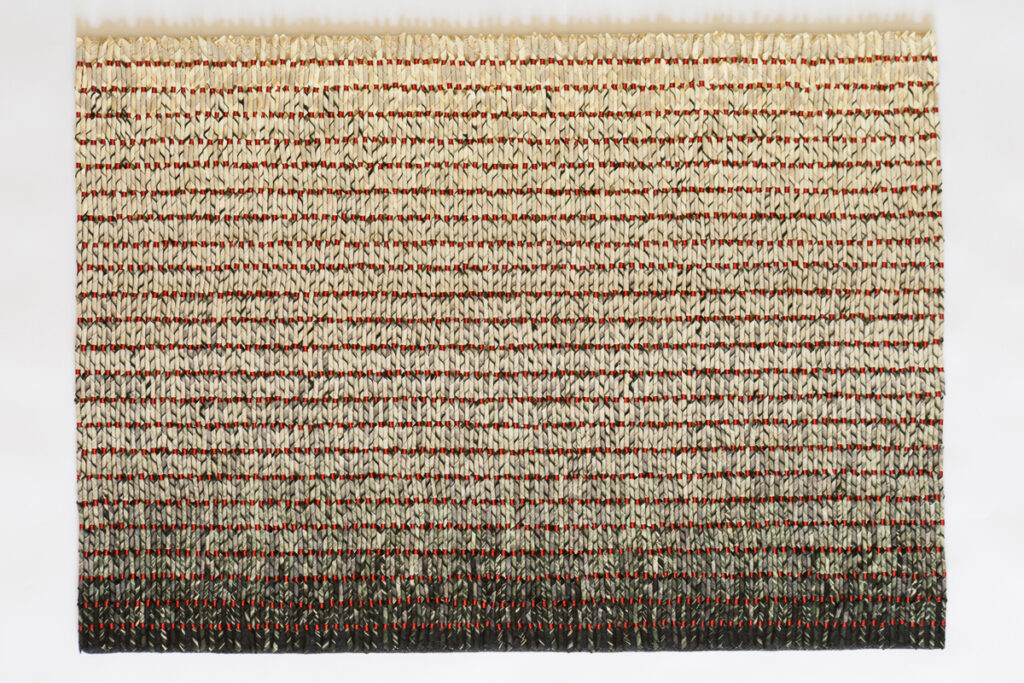 While drawing on traditional culture, Paola developed a unique modernist method in the construction of her work. Her material language featured rollitos: rolled cylinders of textile that she would assemble into major works of art. The thread that extruded would end up forming a vibrant mass. She produced works that contained a myriad of combinations of this rollitos. These bear witness to an insect-like activity from which emerges dazzling forms.

Returning to the origins of her journey during Pinochet, the songs of Violeta Parra are a constant accompaniment to her work. The steady strum of Parra’s guitar reflects the clack of the loom.

Violeta Parra was a key voice of the Nueva Canción movement of protest songs which echoed through South America before being cruelly extinguished in 1975 with the CIA-led Operation Condor. Violeta was not only a talented musician, but also a textile artist. Her arpillera patchwork embroideries reflect the humanism of her songs. You can see them today at Museo Violeta Parra in downtown Santiago. 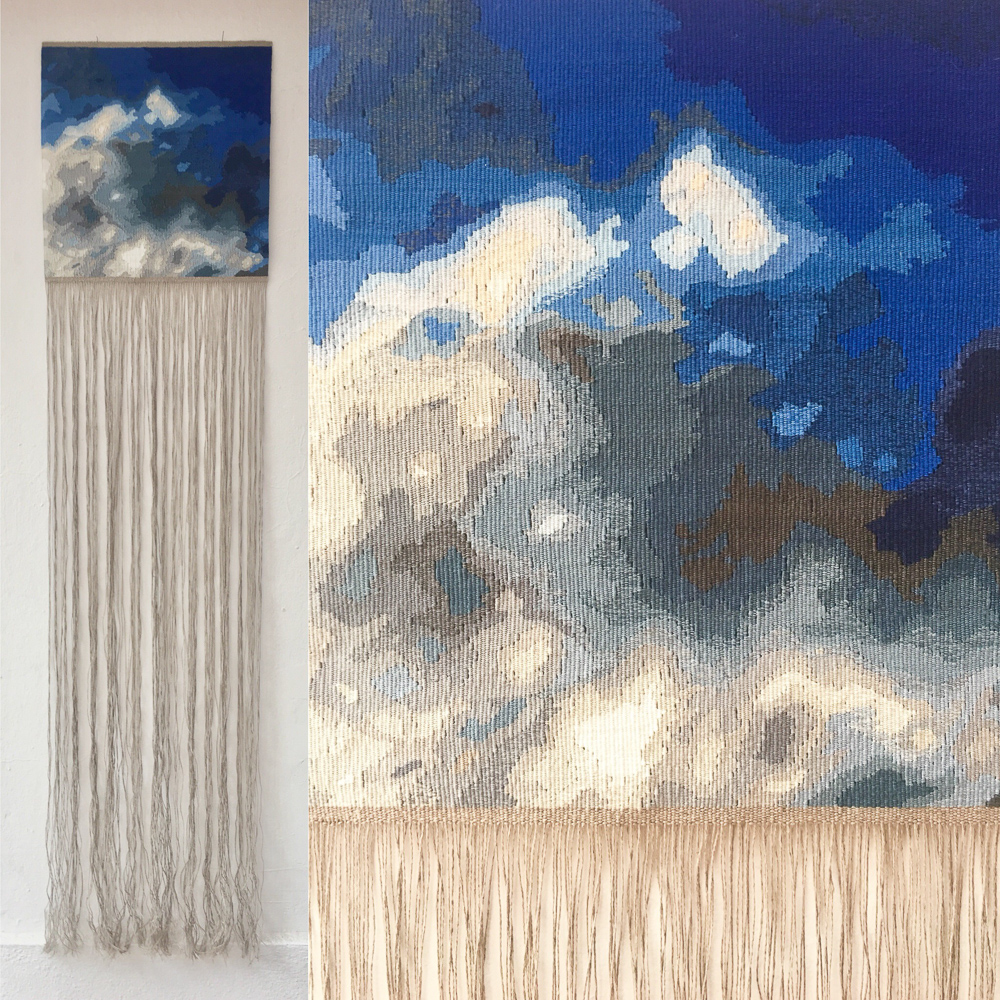 The songs continue to inspire Paola Moreno. For the exhibition, “Al hilo de Violeta” at the Gabriela Mistral, Paola produced a textile work based on Violeta Parra’s song Maldigo Alto Cielo. Despite the anger they express, Parra’s lyrics feature a list of the elements that give meaning to her world.

I curse the Cordillera
of the Andes and the coast.
I curse, Lord, this narrow
and long piece of land,
peace and war, too,
what’s frank and what’s volatile,
I curse what’s perfumed
because my desire is dead.
I curse everything that’s true
and what’s false and what’s doubtful.

How big is my pain…

The work that Moreno produced was partly a response to the death of her brother. The hanging threads both grant a height to the clouds and evoke rain falling like tears from the sky.

Academic positions have provided Moreno with a way of maintaining her art practice and passing on her skills to a new generation, such as Constanza Urrutia Wegmann. Recently she had expanded her activity beyond existing institutions. In 2016, while still teaching at Universidad Catolica, Paola established Centro Arte Textil with Carolina Varela, which has revealed great public demand for her courses. 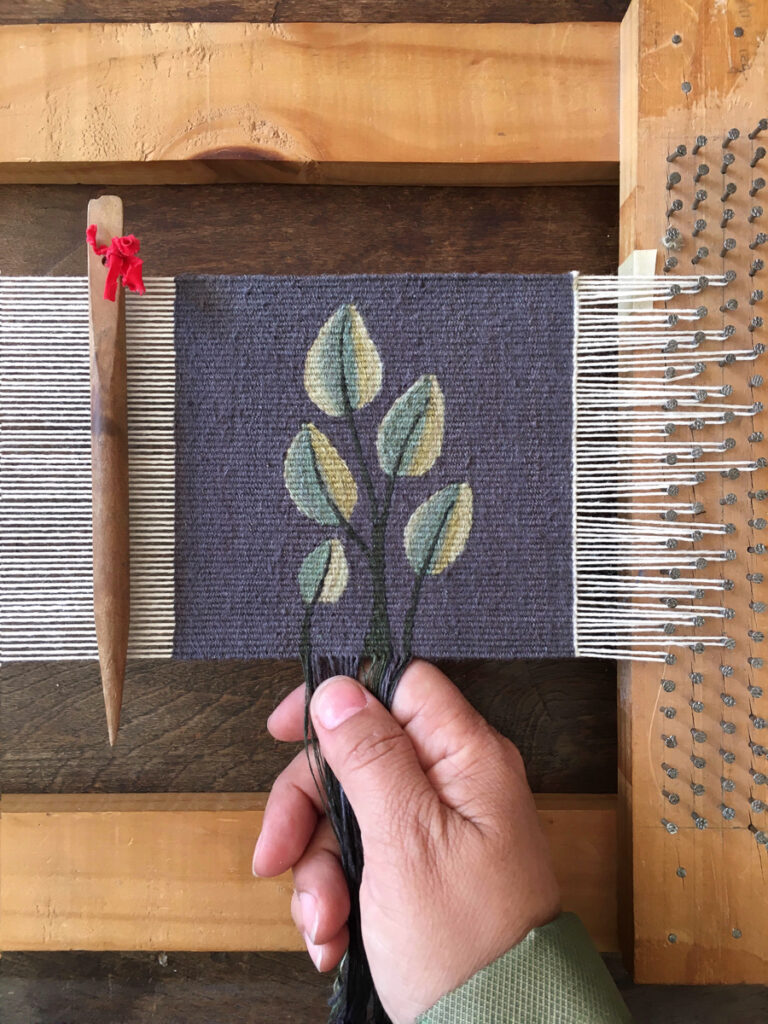 Opportunities to exhibit textile art in Chile are limited, so Moreno has turned to Instagram as a creative forum. These include a work that expresses the continuing journey towards democracy in Chile and the cross as a universal symbol of healing. During the lockdown, her work has responded to the mysteries of life. A work with leaves directly illustrated the recovery of life in plants through their roots. 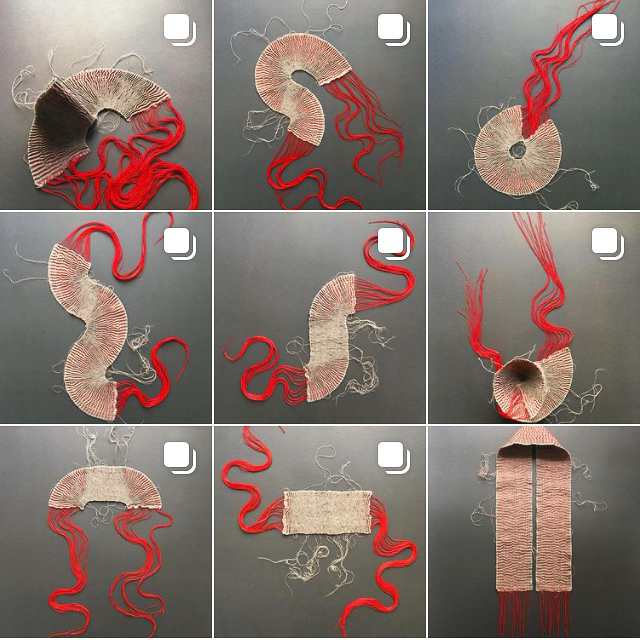 At a more formal level, she has been using Instagram to activate a work made by threading an unpicked textile. Each image reveals a different form. This offers a different way of presenting textiles to the static exhibition format.

Paola’s work continues to express a will to survive. It multiplies and grows. It reflects the other classic song of Violeta Parra, Gracias a la vida, recorded in 1966, four months before her death.

Thanks to life, which has given me so much.
It gave me hearing that, in all of its reach
Records night and day crickets and canaries,
Hammers and turbines, bricks and storms,
And the tender voice of my beloved.

Paola Moreno’s constructive weaving has a rhythm that echoes Violeta Parra’s guitar as it accompanies her list of worldly elements. It shows how weaving can give expression to a life force.

The songs of Violeta Parra accompany me since I was a child, they are a legacy that left me the family life in my childhood and that feeds my current textile work in the day to day. I hope that some of its intensity will feed my art. 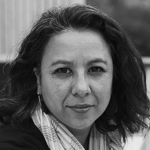 Paola Moreno is a textile artist, designer and Master in Theory and Art History. academic at the Catholic University of Chile and Head of the Diploma in Textile Creation of the same University. Member of the Centro de Arte Textil CAT and the Comité Nacional de Conservación Textil CNCT. Follow Paola at @sylviapaolamoreno y del CAT @cat.centroartetextil

Ankara print histories alive in the streets of Johannesburg
Wissa-Sophy: Back to the woven garden
The Macanas of Gualaceo: Ecuadorian ikat
Tender cloths
From Isan to Paris with silk and water hyacinth
Māreikura: Exploring the goddess in Māori women
アイヌの手仕事：愛と祈りの布作り
The garden of Gildásio