Earth Webs: Weaving into the land 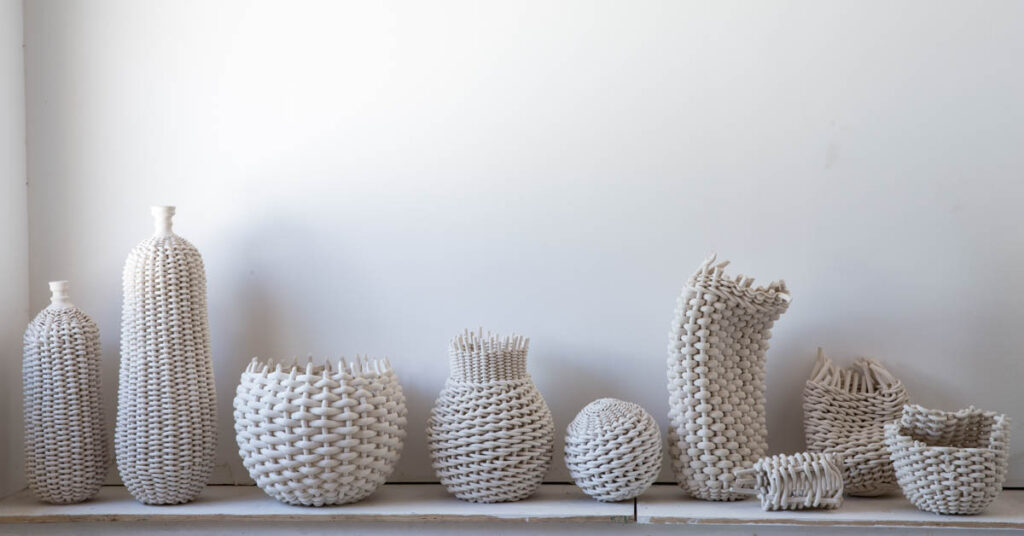 Rina Peleg weaves baskets of clay in response to the shared land from which it comes.

Already in my first meeting with Peleg, shortly after she decided to pack up everything and return to Israel, it was decided that she would establish her studio at the Umm el-Fahem Art Gallery building, in the Arab Israeli town of Umm el-Fahem, which in due course would become her second home. Together, we decided to start another chapter in the long journey of her life: establishing a ceramics workshop for local women, to promote their social, cultural, and economic empowerment. 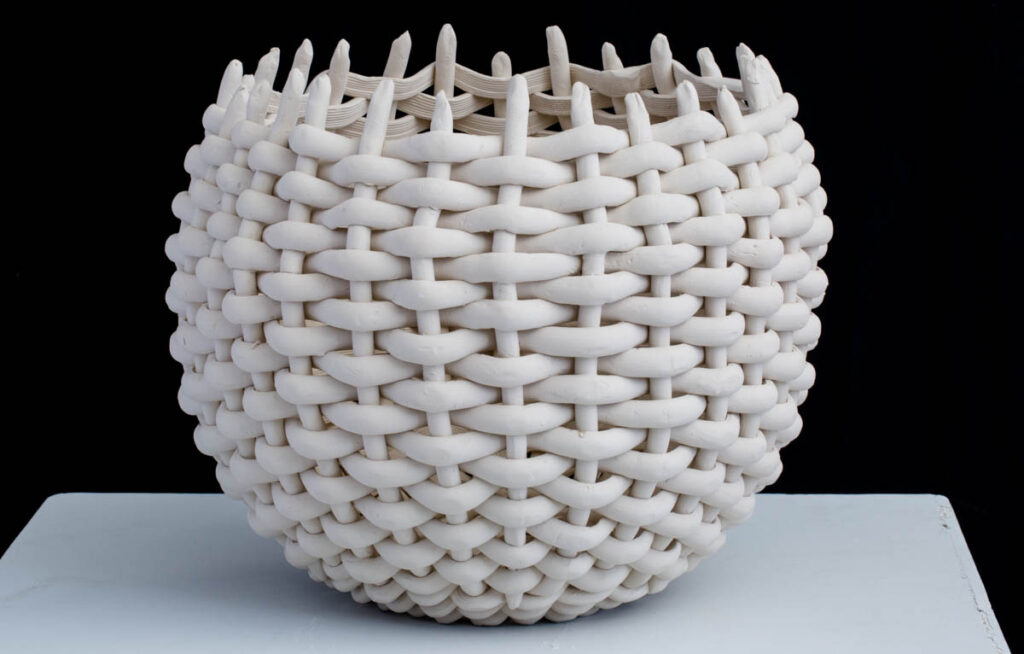 In freehand ceramic work, the clay responds to the movements of the creator‘s hands. The action begins with the muscles of the upper back and passes through the upper arms and forearms to the palms and fingers constraining the clay, to the point where the creator and clay are equally part of the creative endeavor. Working with the potter‘s wheel, too, requires a certain body position and a variety of precisely coordinated movements to work the clay placed on the rotating disc. Similarly, in traditional weaving, the weaver‘s movement is integrated with that of the loom components, until body, loom, and fabric seemingly become one. This technical mastery—that is, proficiency in the various methods of working with ceramic clays—characterizes Peleg‘s work and forms the foundation for her creative range in the medium over decades. 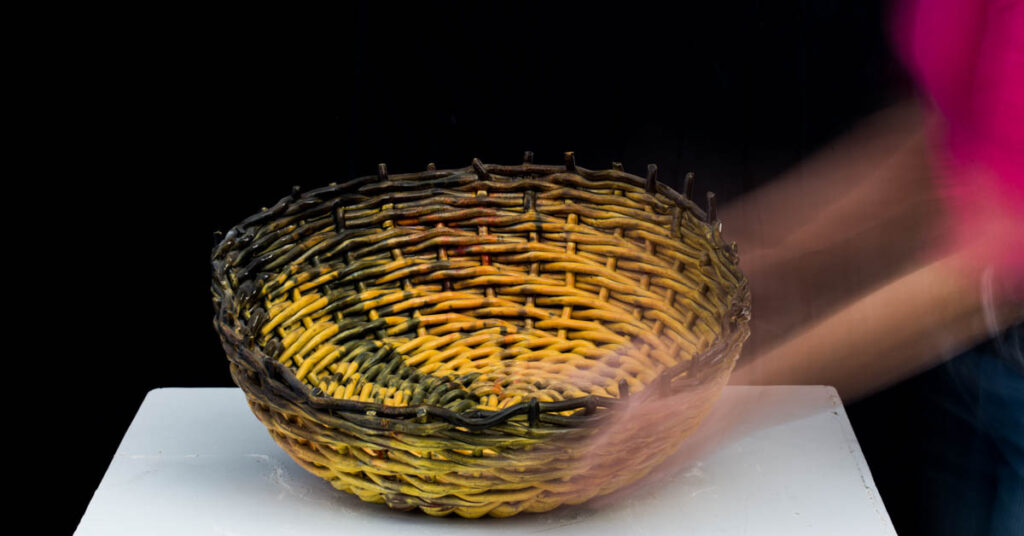 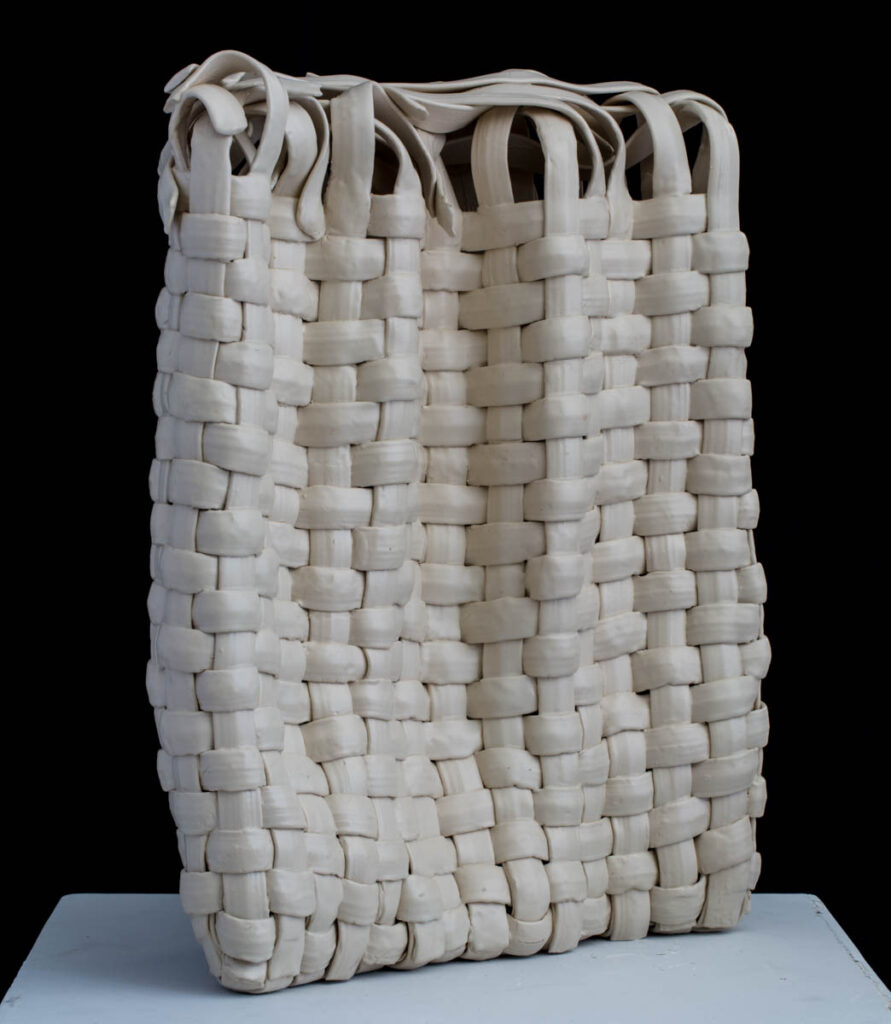 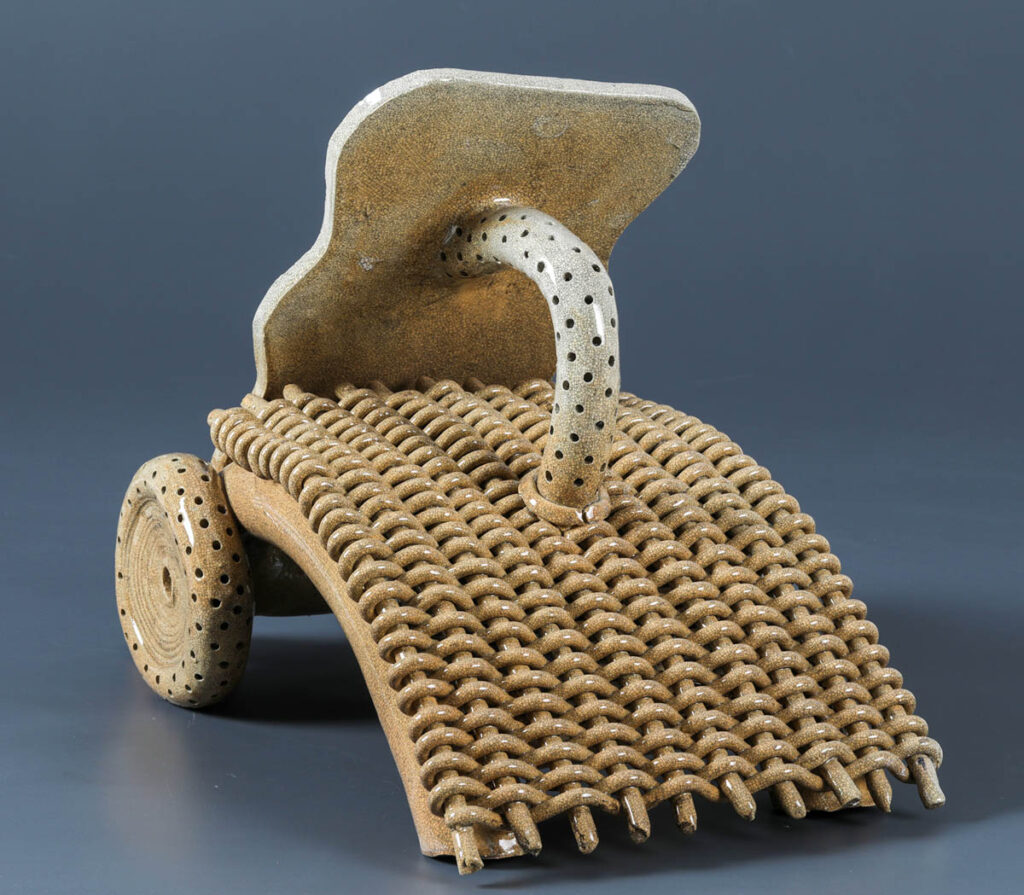 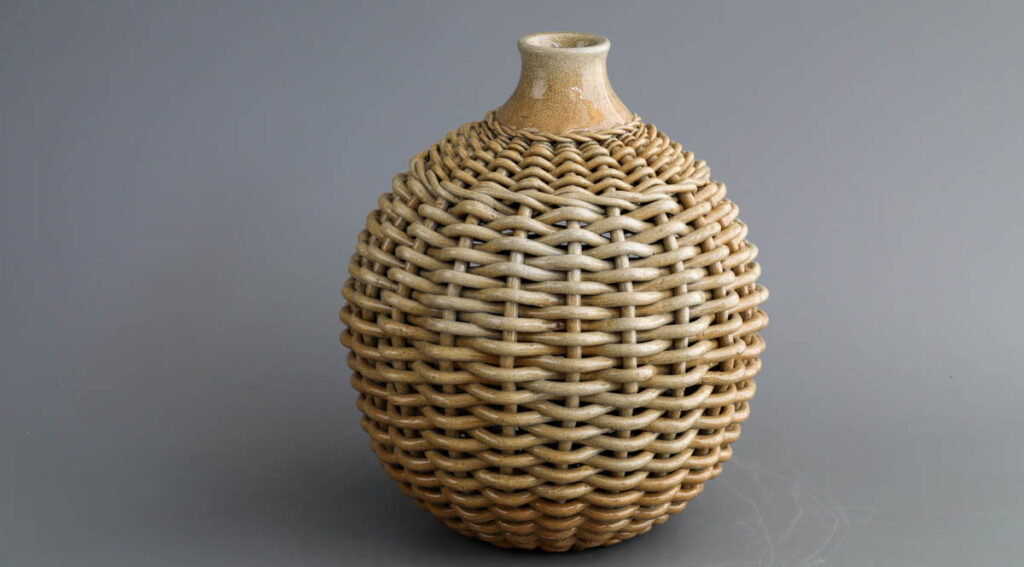 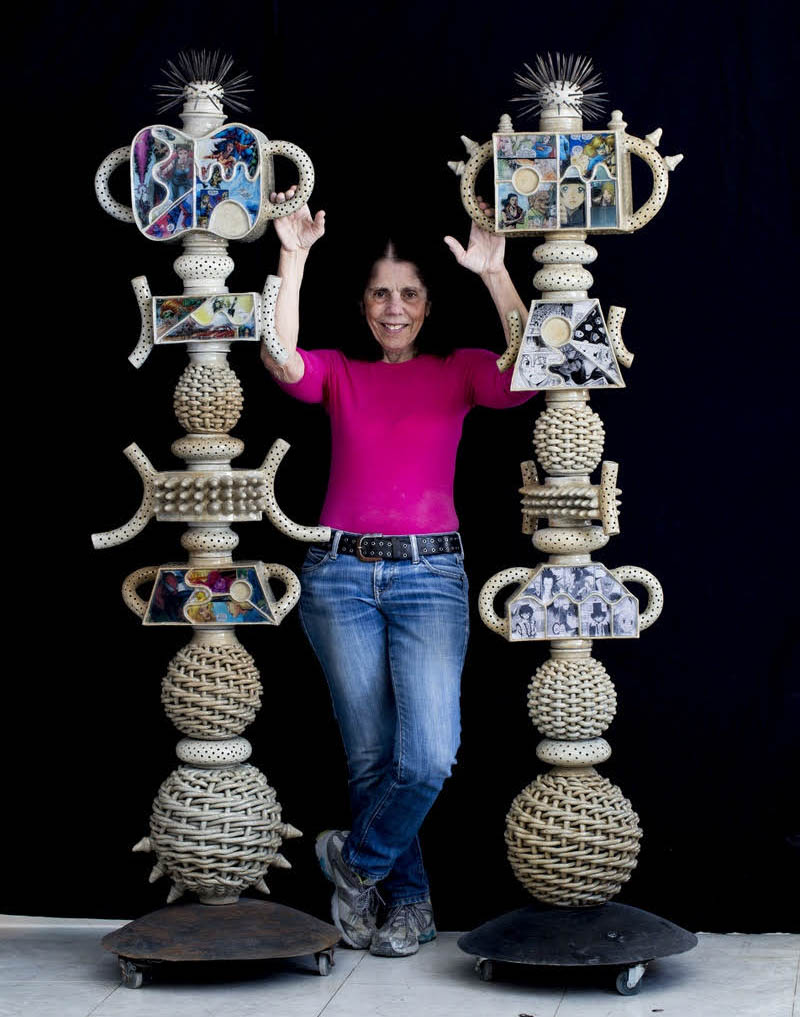 The use of an extruder—which combines manual dexterity and industrial technology—allowed her to create forms with minimal manual contact, thereby largely preserving the raw appearance of the clay. The objects she developed featured predominantly exposed clay, in a reflexive bid to place it, and its technological manipulation, front and center. Previously, Peleg‘s wheel work had sought to achieve a virtuoso level of technical refinement, which pre-determined the effect of every type of touch on the aesthetics, form, weight, and edge texture of the final object, and the ramifications of all these on its function. With her new technique, however, she sought to keep such manual contact to the absolute minimum. In these works, the skilled, professional hand is evident precisely in the removal of all evidence of the hand‘s precise and dexterous actions from the final product. Indeed, the presence of the creator of these objects is seemingly entirely expunged from the object as presented to the viewer—but only seemingly so, since the ”skilled viewer“ understands that the production of this impression requires extraordinary attention and skill on the creator‘s part. 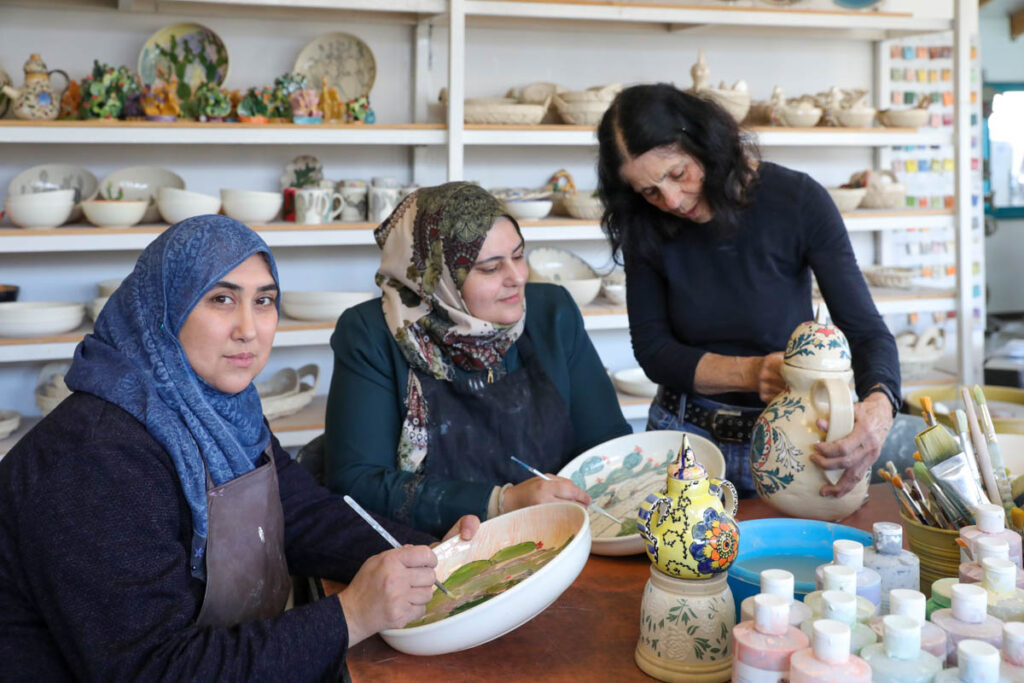 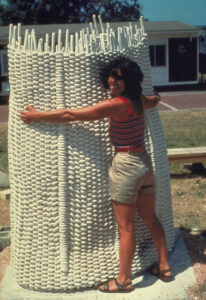 Rina created a huge clay sculpture, a kind of three-dimensional woven structure, larger than a human figure. Surrounding it, at the site, she built a kiln, and fired the sculpture within it. She then dismantled the kiln, leaving the remnants of the performative process as part of the work—a product revealing the process of its creation.

The woven clay motif, which she developed over decades, is also being returned, in a different way, to its own roots—to the hills of Wadi Ara and its local residents, whose lives are tightly interwoven—in Arabic, sumud—a tight bond with land and place with the land.

It retraces a creative journey that began on the kibbutz, continued in a shift to New York for several decades, and finally returned to Israel, making a conscious choice to work at the social, political and cultural fringes of the country—making a statement of belief in dialogue and in living side by side, both at the personal level and in art and culture. 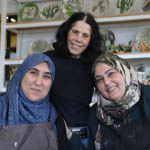 Rina Peleg was born in 1940 in Kibbutz Sha‘ar Ha‘amakim. She studied at the Ceramics Department at the Bezalel Academy of Arts and Design, Jerusalem (1958–60), then returned to the kibbutz, where she established a ceramics studio and gallery. In 1972, she moved to New York with her family, where she established a ceramics studio that produced functional ware. After returning to Israel, she once again left for New York, where she completed a Master‘s degree in ceramics at Alfred University and started producing ceramic sculpture. In 2012, she returned to Israel and opened a ceramics studio at the Umm el-Fahem Art Gallery, where she also teaches ceramics to local women as part of a women‘s empowerment project.

The art of polishing stones
Other Possible Worlds: Threading together Thai communities
The long and winding Silk Road: My quest to uncover treasures from Central Asia
Reflection pods: Yolŋu weavers create a thinking space in Sydney CBD
Kyungsook Park ✿ The craft of conviviality
Walking, thinking, making: A weaver in the world
Imagining a nostalgic future: The cosmic ceramics of Douglas Black
Wood carving in Nepal: How Buddha emerges every day