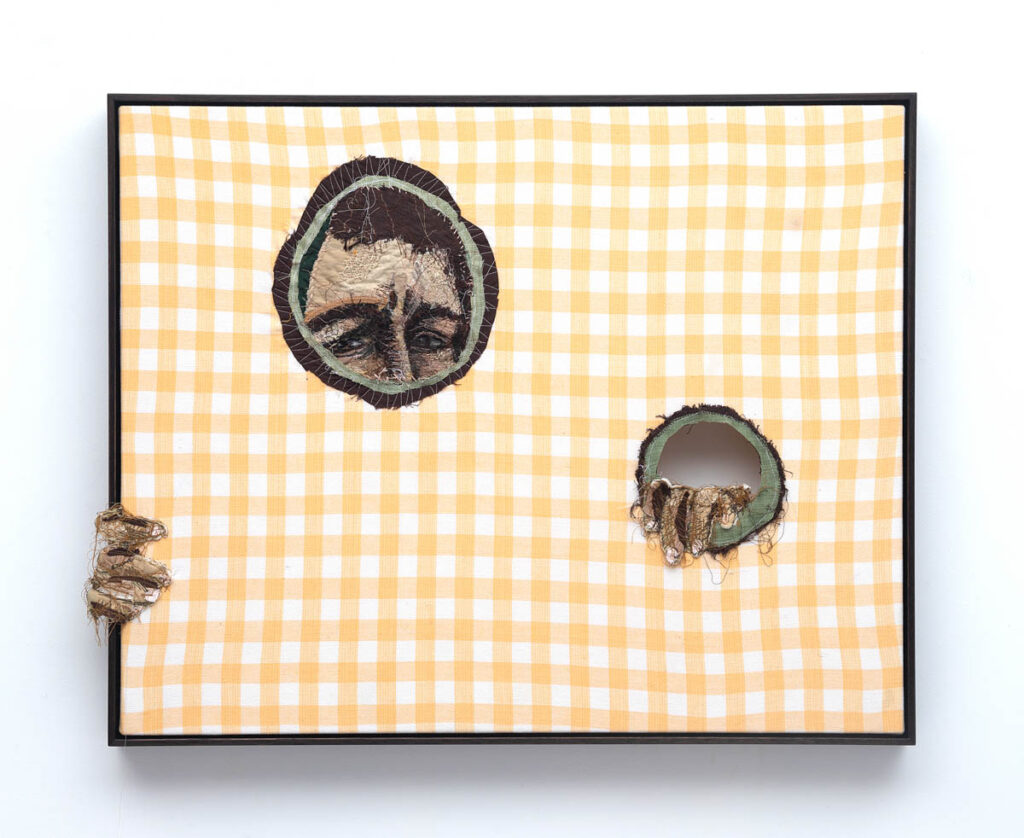 Elyse Goldfinch, Associate Curator at Artspace, Sydney, looks at the “muse” in Julia Gutman’s textile representations of community and friendship among women, on the occasion of the artist’s debut solo exhibition at Sullivan+Strumpf.

Through western art history, the three graces have been used to represent the ideal female form.  Aglaia, Euphrosyne, and Thalya were associated with love, nature, joy, fertility and creativity. The graces were prototypes of femininity, endlessly depicted and manipulated by the desires of men. Typically seen as opulently beautiful young women, often nude, occasionally headless. Flesh exposed and gazes distant—they were readily consumable by design.

The three graces were always posed together, embraced with clasped hands to represent the circle of friendship between women. Yet, they were always performing for some imagined spectator, watching themselves being seen. In Julia Gutman’s Muses, she considers how women were depicted historically and reimagines them as contemporary figures: herself and her friends. This involves moving imagery away from the objectification and performance of the male gaze and bringing to her subjects the power of self-determination, of agency. Conceived during Sydney’s extended lockdown in 2021, this exhibition portrays moments of playfulness, intimacy, closeness and the repetition felt when sharing isolation with your best friends. 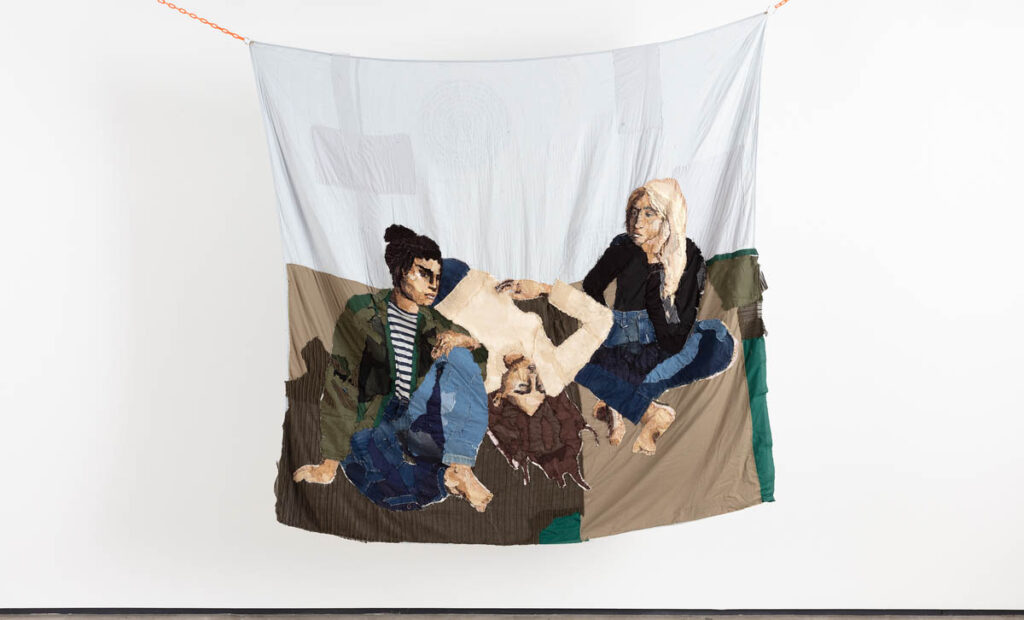 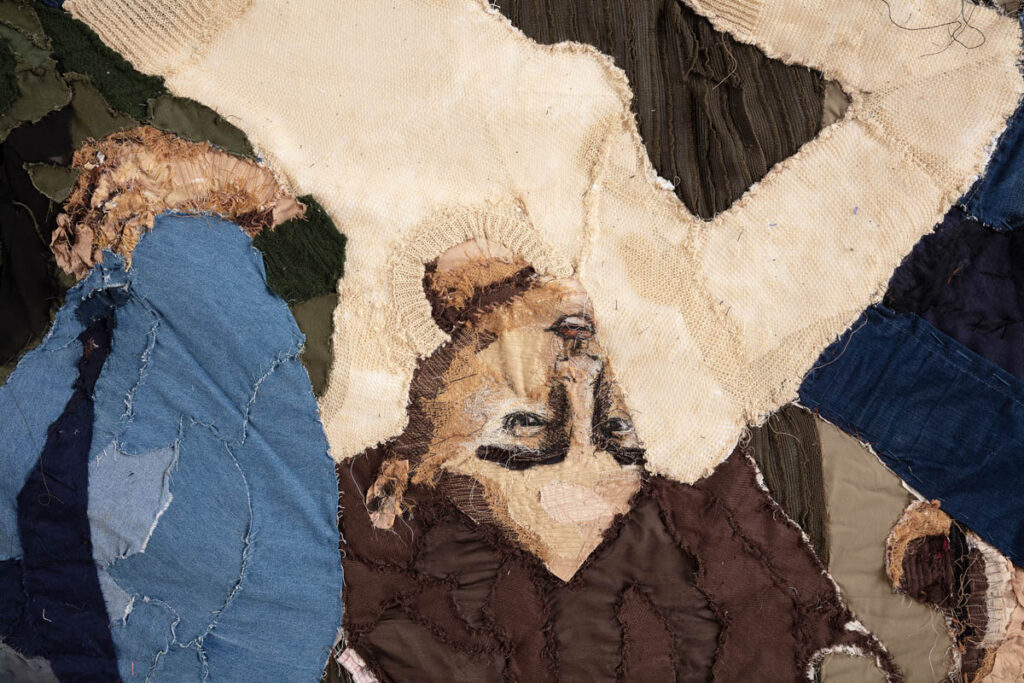 In Once More, With Feeling, Gutman presents herself and her housemates confined with one another throughout the intermittent lockdowns of 2021. Irreverently titled, with reference to Buffy the Vampire Slayer’s musical episode, the three figures lounge together on and around the living room couch as the show plays beyond the scene. The plot of the episode sees the titular character becoming an automaton trapped in the cycle of daily life—an apt analogy for the routines we developed during lockdown, in the grasping pursuit of “normalcy”. The banality of the scene is unsettled by the self-aware expressions on the subject’s faces. Gutman, who is depicted on the left, looks directly at the viewer. Her knowing expression and raised eyebrow suggest that she knows she is being watched. It’s a challenge, a confrontation to us.

Another unguarded moment is seen in Bed Politics where two figures lie together, close in proximity yet expressions detached. The distance between them is a metaphorical cavern as they turn away from each other, tethered only by the tentative hand reaching across the divide. Perhaps post-argument, the scene shows the way our bodies gravitate towards and away from the other. In Gutman’s works, chains and ropes are used to physically and symbolically connect her subjects, forming links between bodies and emotions. Here the ropes weave across the scene, a suggestion that these figures are still joined despite this current moment of boundlessness. 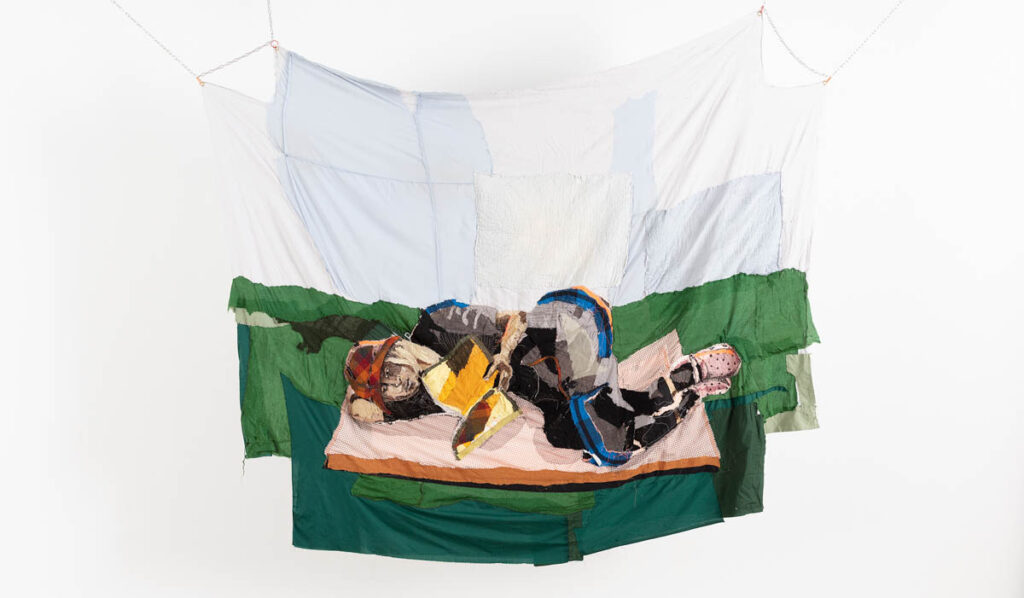 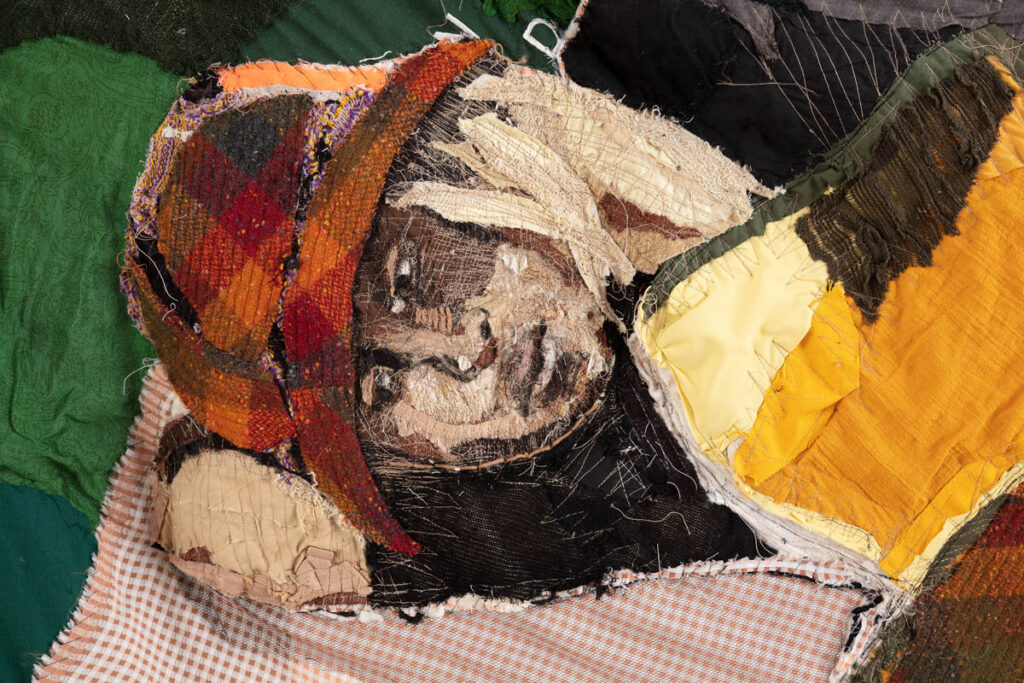 The reclining figure is one of the most common poses in art history, one that is connected with the passivity of the sexualised female form. In All Adults Here, Gutman represents her friend in repose, absorbed in reading a book of the same title. Unlike traditional depictions of reclining women, we don’t see her splayed open for the viewer’s consumption, rather she is captured in a quiet state of concentration, lying at the Cooks River, the only body of water accessible within a five-kilometre radius—an effigy of introspection. The title is a nod to the in-between state of being an adult but still feeling a connection to the safety and play of childhood, negotiating that sense of masquerading in one world while being secured to another. 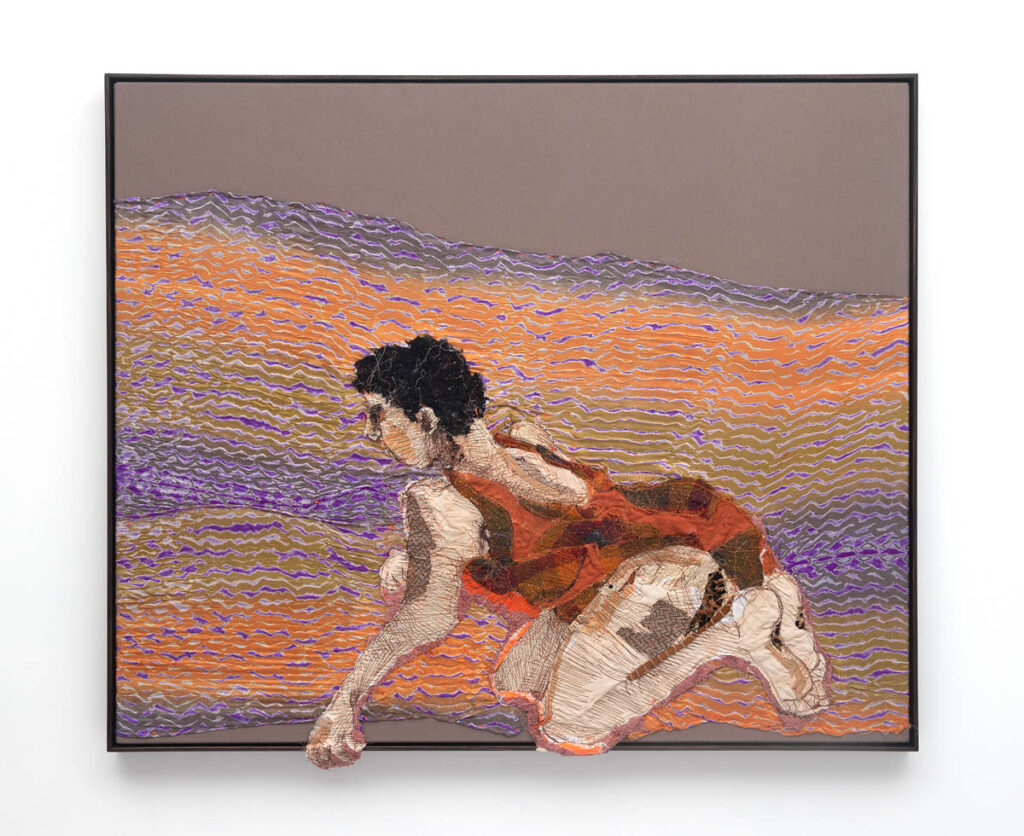 Julia Gutman, I ripped off my scales, one for each of you, (Rainbow Fish), 2022; Donated textiles and embroidery on stretched linen 101 x 122cm; Photography by Aaron Anderson

The theme of water continues with Rainbow Fish where the artist is seen bathing in a luminous river, light reflecting off the water’s surface; and, in Hang me out to dry, a play on words referring to the betrayal of being felt to suffer unfairly with the Sisyphean task of clothes washing, made more ironic still as the work is literally made from old clothing. Every work is rendered in fabric that once belonged to the subjects represented. There’s a deep intimacy to Gutman’s materials as they relate directly to the body. Her materials once made contact with skin, acting as a layer of protection and comfort. It shows the physical history of that person: marks, stains, tears, all produced in the daily wear and utilitarian function of apparel.

Embroidery was traditionally seen as “women’s materials” connected with domesticity, craft and the silencing of women’s voices in art history. Gutman’s subjects physically become the work as the donation of their clothes transforms into expanded portraits. By focusing on images of herself, her family and friends, as subject matter and inspiration, Gutman is renegotiating the history of portraiture and the representation of the “muse”. Her allegorical re-imaginings represent how women continue to be portrayed as inspiration for works of art. Gutman’s muse is no longer passively objectified but is actively represented. They contribute to the process and creation of the work. It’s part of a collective action, one based on the desire for community, tenderness and friendship between women.

As someone who spent isolation alone, in drawn-out solitary hours, I see these works and imagine the solace these women found in each other. The comfort and ease of their bodies in proximity to one another. This body of work centres the importance of friendship and the representation of love between friends as something equally as important and worthy as romantic love. As bell hooks writes, “Romantic friendships are a threat to patriarchy and heterosexism because they fundamentally challenge the assumption that being sexual with someone is essential to all meaningful, lasting, intimate bonds.” This exhibition is a patchwork of entanglements grounded in the yearning, connection and contact between ourselves and those closest to us. 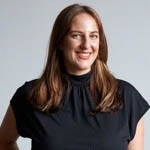 Elyse Goldfinch is a curator and writer living and working on Gadigal country, Sydney. Goldfinch is currently Associate Curator, Artspace; Co-Chair and Board Director, Firstdraft; and on the curatorial team of the Australian Pavilion at the 59th La Biennale di Venezia. She is the lead curator on the 2022 NSW Visual Arts Emerging Fellowship exhibition held at NAS Gallery, in partnership with Artspace.