The meaning of yellow

Framed weaving by the author – yellow silk from the outer layer of the cocoon (from Laos) top; lower level is ramie.

Helen Ting’s weaving is inspired by the deep meaning of the colour yellow in Chinese culture.

Neurologists, the modern scientists of the mind, have discovered that human beings do not perceive reality fully.

Our minds simply cannot process everything. Instead, we perceive aspects of the world around us. Our minds fill in the rest, helping us (or hindering depending on how you see it), get on with daily life using a concept of reality based on assumptions, expectations and past experiences. Our default view of reality, in other words, is part real, part fabrication.

‘With our thoughts, we make the world’ – so says the narrator of Monkey, the 1970s cult TV series.

This explains some things about making objects.

Making an object often means representing something with something else. Past associations, whether personal or cultural, lead the maker and the viewer to see something that’s not actually there.

Often, the connection to something not present is most precious to the maker. Times past; places remembered; things lost – these can be conjured in the maker’s imagination through an object.

My weaving is often based on the colour yellow, most often yellow with a golden hue.

Gold, of course, signifies wealth. But like many Chinese concepts, a cluster of material and non-material ideas surround a single word. With gold, these include abundance and good luck. Since the cradle of Chinese culture lies in subsistence agrarian communities, the ideal of plenty (food, money, children etc) is prized. Plenty is often dependent on factors beyond human control such as fortuitous weather. Thus, the importance of luck and our deep sensibility for the place of humans amidst cosmic forces.

Even today the shape of a gold ingot, the currency of ancient times, is used as a good luck charm.

Power and strength can be implied by golden yellow. The Chinese word for gold (金) originates from the word for metal. The pictogram (most Chinese words were originally pictures) is said to depict a bronze axe being forged.

Hence transformation from base metal to a powerful object is also implied. The axe head is faintly indicated at the bottom of the character by two small diagonal strokes.

The Story of Chinese Character: 金

It is impossible to avoid ambiguity about the concept of abundance when non-material qualities such as virtue and happiness are being represented simultaneously with wealth and power.

Such ambiguity is common in Chinese culture. But as Eastern thought values harmony (or balance) between opposites, their co-existence does not neutralize their opposition. Instead, one has faith that the mind can hold each and both with equanimity.

The fable-like combination of power and virtue is present in the story of the Yellow Emperor (Huangdi), the legendary first emperor of China from whom all Han Chinese are supposedly descended. Huangdi was supposed to have united the tribes inhabiting the Yellow River plain.

The association of yellow with power continued to later times (Qing Dynasty) when yellow was an imperial colour reserved for emperors.

Legend says that Huangdi was conceived when his mother became pregnant after seeing a yellow ray of light turning around the North Dipper. It is said he lived for more than a hundred years. At the end of his reign, he gave up worldly affairs to pursue spiritual perfection. Having attained it, a golden dragon descended from the skies to take the Emperor to heaven. 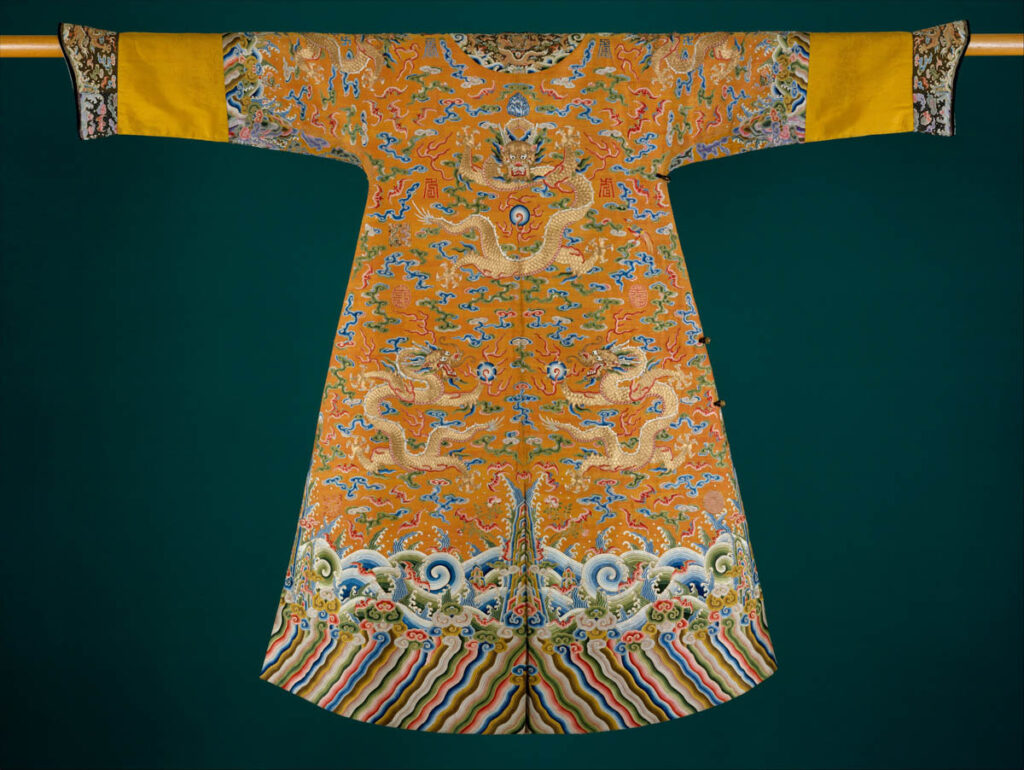 Festival robe or dragon robe, 18th Century in Metropolitan Museum of Art. May have been for the Emperor Qianlong. Decorated with five-clawed dragons (a symbol reserved for the Emperor) and other auspicious symbols.
www.metmuseum.org/art/collection/search/69066

Huangdi’s first wife was Empress Leizu. According to legend, the Empress discovered silk and began sericulture, the farming of silkworms for silk production. One day as she was sitting under the shade of a mulberry tree drinking tea, a cocoon fell into her tea cup. Upon removing the cocoon, she noticed the fine strands emanating from the cocoon. And so the idea of silk yarn was born.

China is of course famous for silk textiles. From ancient times, Chinese silk was central to its trading power.

My own textile work started with linens and ramie which I dyed yellow. These textiles, to me, are like the talismans or good luck charms that I grew up with. It was normal for talismans to hang in the house, perhaps on a door knob or from a cupboard. Perhaps collected as a memento from overseas but always with an unspoken belief that maybe they might bring good fortune.

My weaving hangs on walls in a similar way.

Afterwards, I discovered naturally occurring gold-coloured silks that I could weave. The first discovery was made by chance by a friend while wandering in a market in rural Laos. It was a large hank of rough silk from the outer layer of local silk cocoons. A sort of buttery yellow with occasional brown slubs; not slippery fine silk but coarse and lumpy.

So began my enthusiasm for naturally yellow-gold yarns. 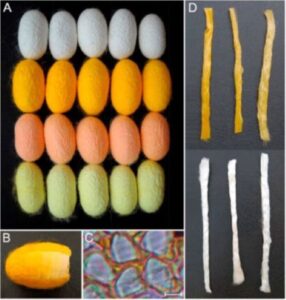 A while ago I discovered naturally gold Muga silk from India. This hand-spun silk is so fine I re-spin six strands together to create a fine single-twist yarn of 0.8mm diameter for tapestry weaving. When in hanks the silk is so light and the yarn so crinkly it makes a satisfying crackle sound when squeezed. The colour is gold with a sandy hue that becomes slightly more matt when re-spun.

Naturally yellow-gold coloured silks, cocoons and filaments. (Photograph from Mingbo Ma a, Munir Hussain a, Suozhuai Dong b, Wenlong Zhou; in Characterization of the Pigment in Naturally Yellow-colored Domestic Silk in Dyes and Pigments 124, 2016, 6-11)

Though I have not sought this silk out, I have read of a textile expert and fashion designer duo who created a bright gold cape for exhibition at London’s Victoria and Albert Museum made from the silk of over one million female golden orb spiders collected in the highlands of Madagascar. It took over five years to collect the spiders. Fortunately for the spiders, after spinning their golden webs, they were set free.

Since spider silk is both strong (stronger than steel) and flexible, research into its chemical structures is taking off with the hope of transferring this knowledge to manufacturing and medical applications.

Other gold-coloured silks have been specifically cultivated from mutant domestic silkworms. Shades of pink and green silk have also been produced. Their brilliance of colour, however, is strongest in the outer layers of these cocoons. Researchers in France and Singapore are continuing to investigate the effects of mulberry leaf diets on silk colour and whether they can isolate the chemicals that may help the sericulture industry to develop deeper and light-fast gold colours in the silk filaments themselves. 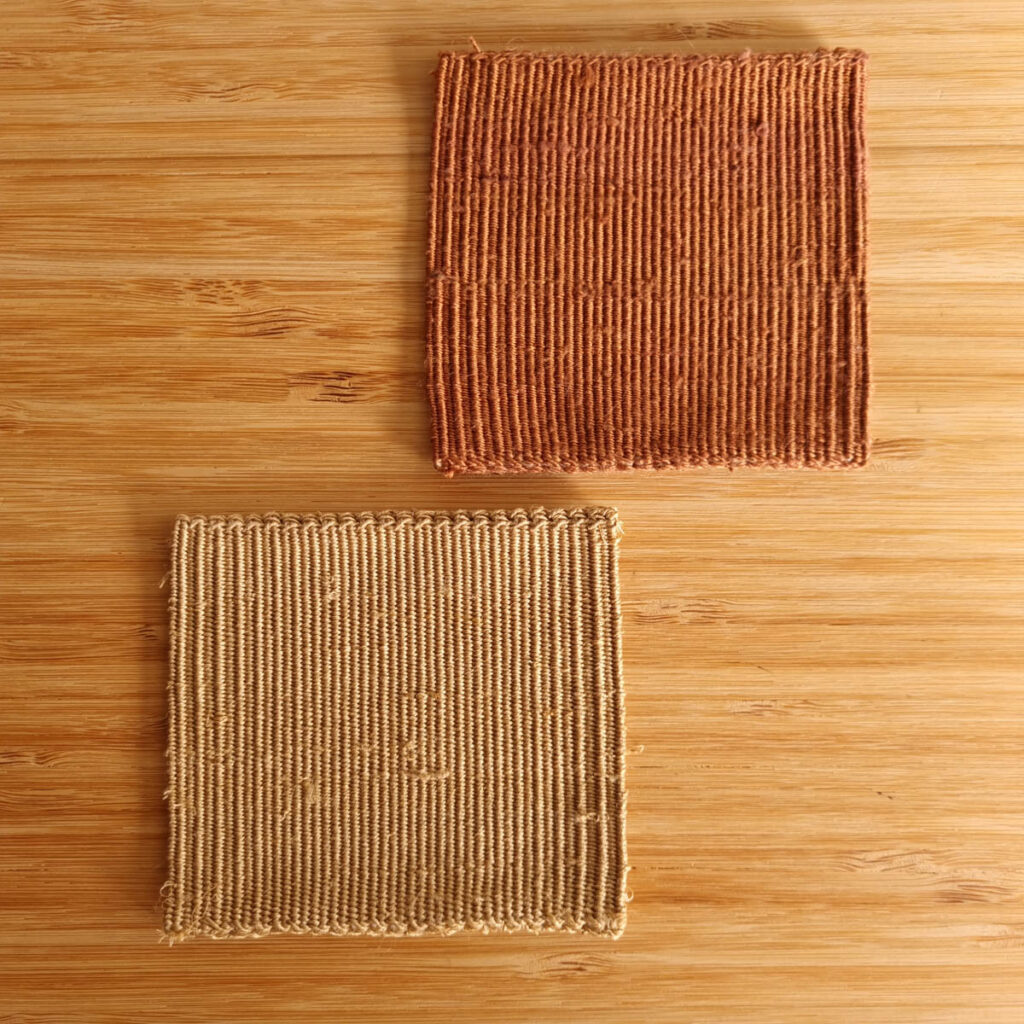 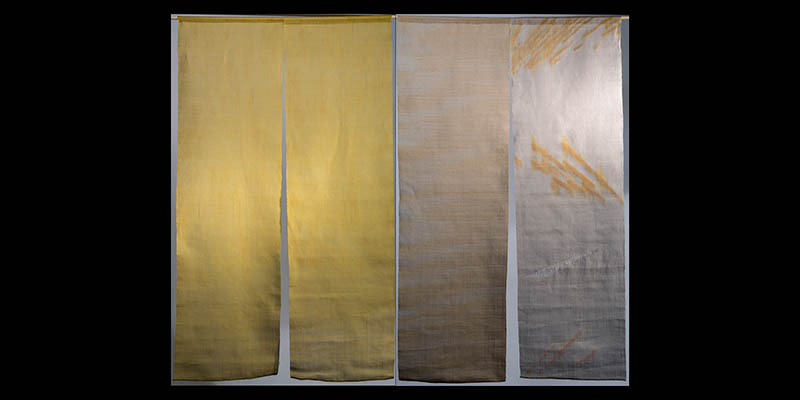 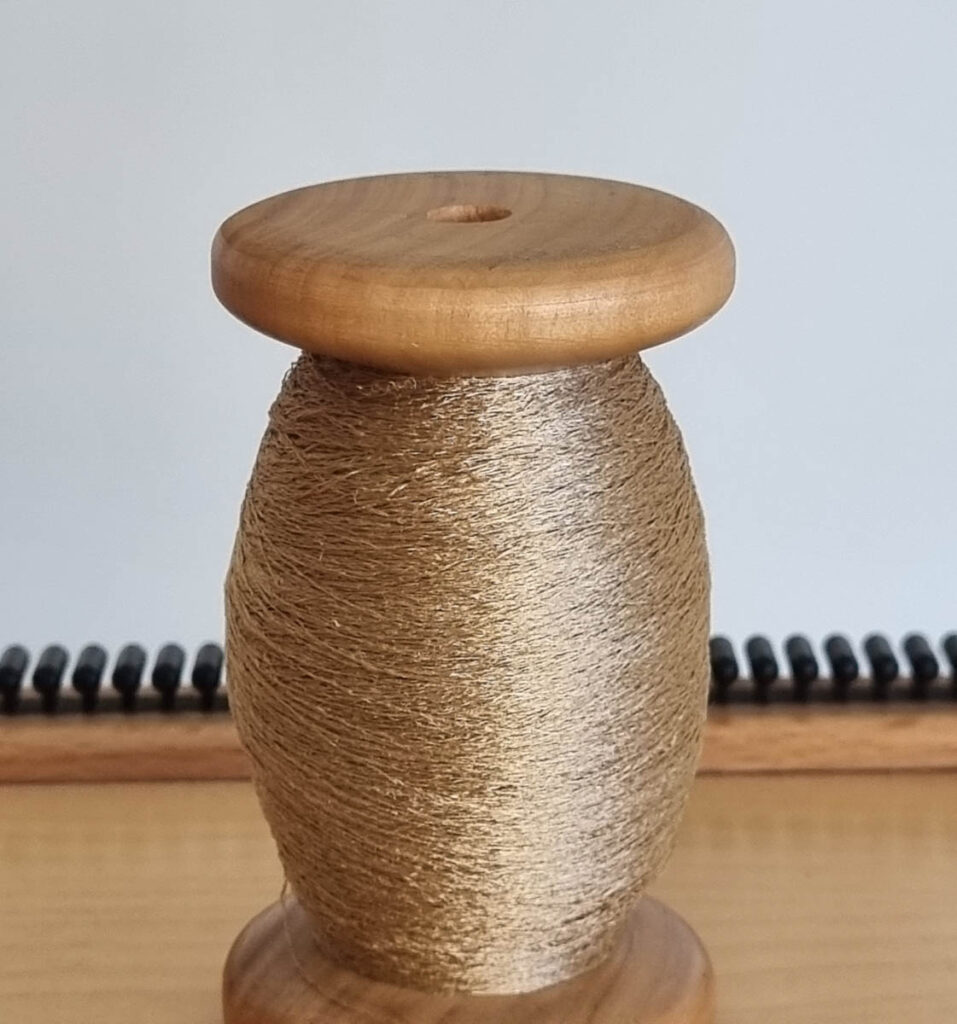 Mingbo Ma a, Munir Hussain a, Suozhuai Dong b, Wenlong Zhou, Characterization of the pigment in naturally yellow-colored domestic silk in Dyes and Pigments 124 (2016) 6-11

“Reality” is constructed by your brain. Here’s what that means, and why it matters. 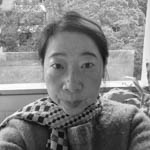 Helen (SiuYi) Ting is an Australian-born Chinese living in Sydney, Australia. She is a hand weaver and freelance writer on handcraft. Her weaving has been exhibited in several galleries in Australia.

Works never seen before in this world
アイヌの手仕事：愛と祈りの布作り
The long and winding Silk Road: My quest to uncover treasures from Central Asia
The worldly currency of Abdullah Syed
Why the copy of a Turkmen wedding dress is better than the original
Safed: The beauty of simplicity
From Isan to Paris with silk and water hyacinth
The fabric of memory: Story cloth as art and history for Hmong in USA