The nine-yard sari: Bolts of love in clay

Varuni Kanagasundaram reflects on parallel transformations of migration and translation of textile into clay.

The sari has remained a drape worn by women across the various states of India and Sri Lanka (Katiyar, 2009). It consists of six to nine yards of continuous cloth that is made of cotton, silk and in modern times, synthetic fibres. In many countries, traditional clothing has all but disappeared except for ceremonial occasions. How a sari is draped, its colour and design can reveal so much about the female: the caste, class, ethnic region, marital status, religious and ceremonial significance. It is this visual language through drape that drew me to using the sari as a metaphor to express the narrative of hybridity in the diaspora.

European colonisation of distant territories which began around the eighteenth century has had a significant impact on local and indigenous communities as well as members of the diasporas (Pooke and Newall, 2008). Many factors such as identity, ethnicity, place in society, spirituality, tradition and modernity in practice, frame the different perspectives of people of the post-colonial world. Hybridity has become the dominant idea in postcolonial theory. Hybridity, however, has many faces and is constantly evolving. Speaking the language of Homi Bhabha’s “global cosmopolitans” (Bhabha, 1994, p xiv), artists such as myself represent the perspective of those at the crossroads of cultural traditions. It is explained in Location and Culture that

Social articulation of difference, from the minority perspective, is a complex, on-going negotiation that seeks to authorise cultural hybridities that emerge in the moments of historical transformations. The “right” to signify from the periphery of authorised power and privilege does not depend on the persistence of tradition; it is resourced by the power of tradition to be re-inscribed through the conditions of contingency and contradictoriness that attend upon the lives of those who are “in the minority” (p3).

As a ceramic artist, I explore my cultural origins within the Tamil ethnic community in Sri Lanka, recollecting memories of cultural rituals, customs and visual landscape of vivid textiles worn by women. These become deconstructed, reassembled, accentuated in some, abstracted in others, into a body of artwork. As part of the Tamil diaspora, it is created from a position of “boundaries” of cultures that are constantly experiencing shifts.

As objects of love, sarees are given as gifts to the bride by the bridegroom’s family, often red in colour that is rich in design and made of silk. In Tamil Brahmin custom of Sumangali Prarthanai, a ceremony is held for the bride by married females known to her and she is presented with a nine-yard sari to mark the occasion. A new sari to mark rites of passage for a female entering puberty and auspicious occasions remain important in Tamil customs that accompany ceremonial events. 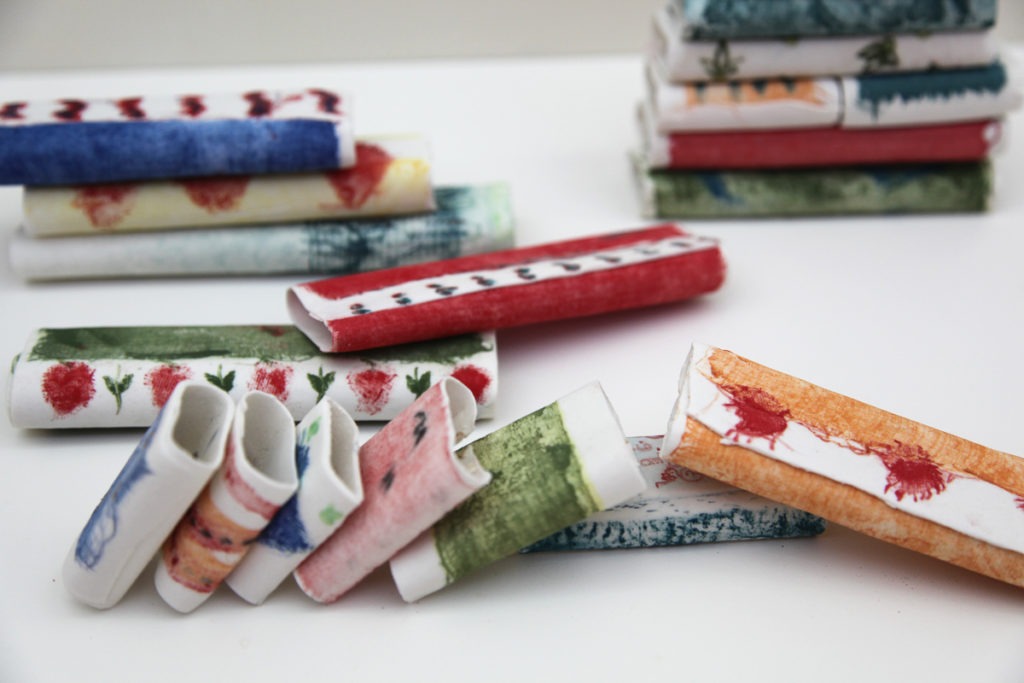 “Stories Embodied” in the exhibition Objects of Love at Craft Victoria, Melbourne in March 2020 reflects bolts of sari fabric often displayed in stores, each unique in decorative design, colour combinations and material. Each can embody a female body. In making the forms I use wooden slats that were once louvres for a door that opened a wardrobe in my home in Melbourne. I wrap the decorated clay slabs like fabric around small lengths of the slat, the firing revealing the space they occupied. The forms bring objects that were part of a connection to places of belonging in different continents and cultures.

Textiles have long been associated with the Indian subcontinent in terms of their richness in colour and design of borders. Although the weaving has become increasingly mechanised, the hand dyeing of fibre and the handlooms remain a visible part of the industry. The revealing of the warp and the weft of the weave can have a strong symbolic meaning which is captured in the ceramic pieces through individually adding coloured stain to accentuate the weave. It represents meeting points of opposing elements to create something new as well as the act of the hand in its creation (Black Dog Publishing Ltd., 2008, Hung, S. and Magliaro, J. ed. 2007). The weaving of different cultures, each with their own origins, have the ability to construct something new. Each hybrid form can be different, speaking the many voices of the perspective of the diaspora.

Each region in India has also developed its unique design and combination of colours in sari, adopting it from the local architecture, culture and landscape (Katiyar, 2009). The manner in which the sari is draped, the choice of colours, the richness of the quality of the sari are dependent on many factors. Although the sari as an elegant and decorative drape wraps around the female body many times concealing the body, it reveals many underlying elements of the wearer, thus binding that female to their position in society.

I use sari border design, colours of pigments, and thread, which are all used in ceremonial and religious events, as symbolic representations of the Indian subcontinent combined with decorative elements of western textile craft. By introducing unravelling of the thread, the bleeding of design, the tear in the textile that becomes the decorative element and gradual abstraction of textile design, I convey the transformation of the traditional culture of the Indian subcontinent. These visual elements convey the transformation in ceramic form, each with an individual story to tell.

Red in Hindu religion has immense significance in the South Asian subcontinent as it is used in auspicious occasions such as marriages, birth of a child and festivals (Katiyar, 2009, Watson, F., 1991). Red, saffron and ash marks are placed on the forehead during religious ceremonies. Red pottu is placed on the forehead or near the parting of the hair by married women. The henna design in red is applied on the hand and feet of women during ceremonial occasions. Turmeric is often used for purifying objects as well as the body. Blue is assigned to high spiritual power as that of Shiva the creator and destroyer, as well as Lord Vishnu.

The act of repetitious making of the bolts of fabric in ceramic form, each slightly different from the next, emphasises the handmade. The fabric is often sourced from thrift stores as white tableware or bed linen that was made in India. In other instances, I use fine fabric from traditional clothing from my wardrobe. By converting the tangible such as thread and fabric to fired ceramic objects emphasises the preservation of the culture of my Tamil cultural origins, the act of the hand-made and also the fragility of the craft form in our modern culture. The re-invention and attention to detail, in the form of decoration that consumes time, is an important part of my practice. As a response to the current “time-saving” culture, my creative practice involves the practice of repetition of the handmade that takes time. The steady laying of thread, one at a time, the unravelling of the weave strand by strand, hand painting designs, the writing of phrases in a repetitive manner using coloured slip, are some of the practices that introduce time, ritual gestures, mark-making and concentration into my practice. It serves as a form of performance in my practice where I am the only witness. The solitary performance is evident in other ceramic pieces such as ‘Kolam Beneath my Feet’ where my feet are painted in coloured slip and I place my feet on slip impregnated fabric in a manner similar to standing in a place of worship at sacred sites in the Indian subcontinent. The subtle red footprints on white clay slip also resemble petals of flowers offered at sacred sites.

The fragility of the fine ceramic pieces made of Southern Ice porcelain paper clay and porcelain slip is an intrinsic part of the work which emphasises the fragile status and preciousness of our places of cultural traditions. There is an emphasis on the negative spaces of objects and structures that represent features that draw from urban or domestic scenes. It invites us to consider the spaces we live in and occupy every day and perhaps consider how we embody them.

The deconstruction of the sari as a textile in its simplest element, revealing the warp and weft, is a significant aspect of my practice. The culture expressed through the colour of fabric, thread, stitching and pigments have strong religious and cultural symbolism.

Through translating the sari bolts into ceramic objects I transform, harness and celebrate the memory of the visual landscapes of women of the Indian subcontinent as a way of preserving and recalling my cultural origins but also transforming it as a person within the diaspora who has incorporated other traditions.

Hung, S. and Magliaro, J. ed. 2007, By Hand: The Use of Craft in Contemporary Practice, Princeton Architectural Press, New York. 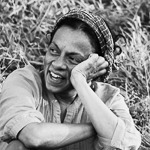 Varuni Kanagasundaram, an artist predominantly working in ceramics is based in Melbourne, Australia and currently undertaking a PhD at RMIT University. Projects and artwork undertaken by Varuni explore cultural rituals of women from the Indian subcontinent that can be viewed on here and upcoming group exhibitions ‘Objects of Love’ at Craft Victoria (March-May), NCECA Annual Exhibition The Burdens of History, Richmond, Virginia, United States (March) and Ceramix Exhibition, Manly, Sydney (May-July). Through ceramic installations, performance and community engagement in making, the creative practice tries to bring a dialogue on expression of cultural traditions of migrants.

Flamboyance and intensity: Contemporary ceramics of Peter Cooley
Pots in Action: The ceramics project that made Instagram sparkle
Mitsukuni Misaki: Beginning to breathe
Remembering when the world came to Kyoto in 1978
Tonglen: An artist buries his life's belongings
Beyond Limitations Mentorship camp, ClayArch Gimhae Museum
Kumbharwada: Make in Dharavi
Getting a handle on the making revival