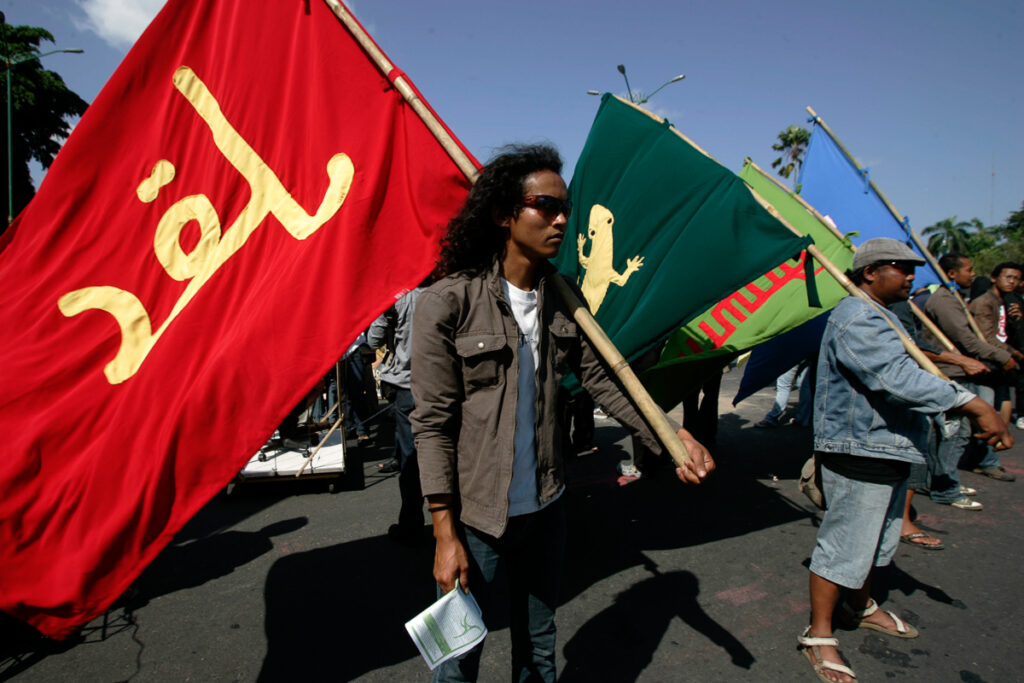 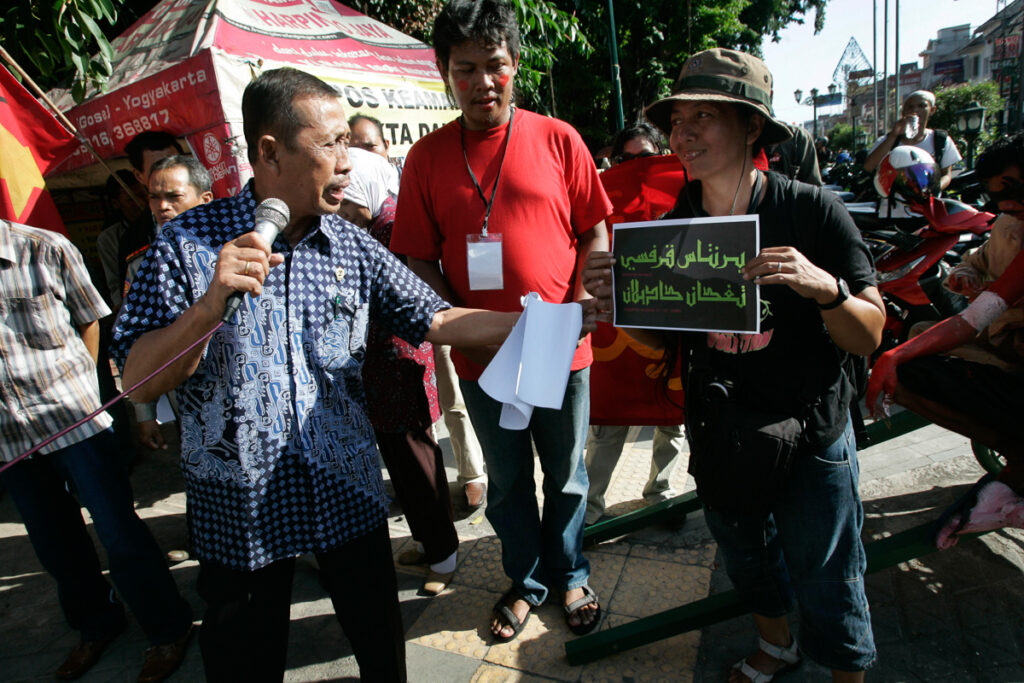 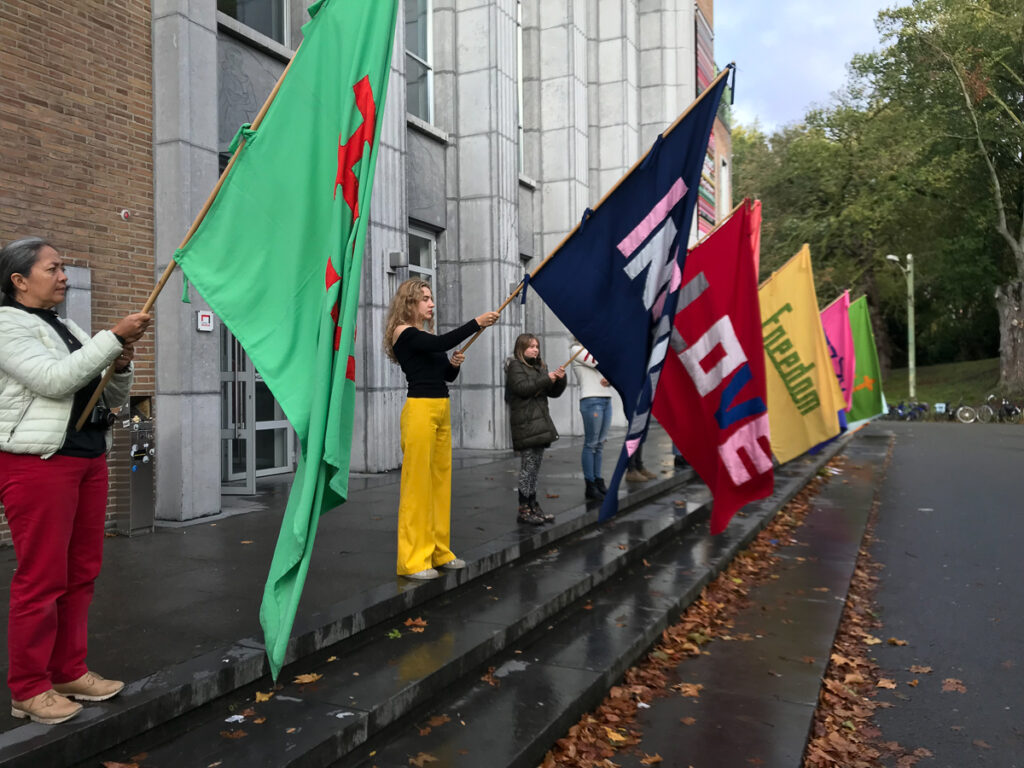 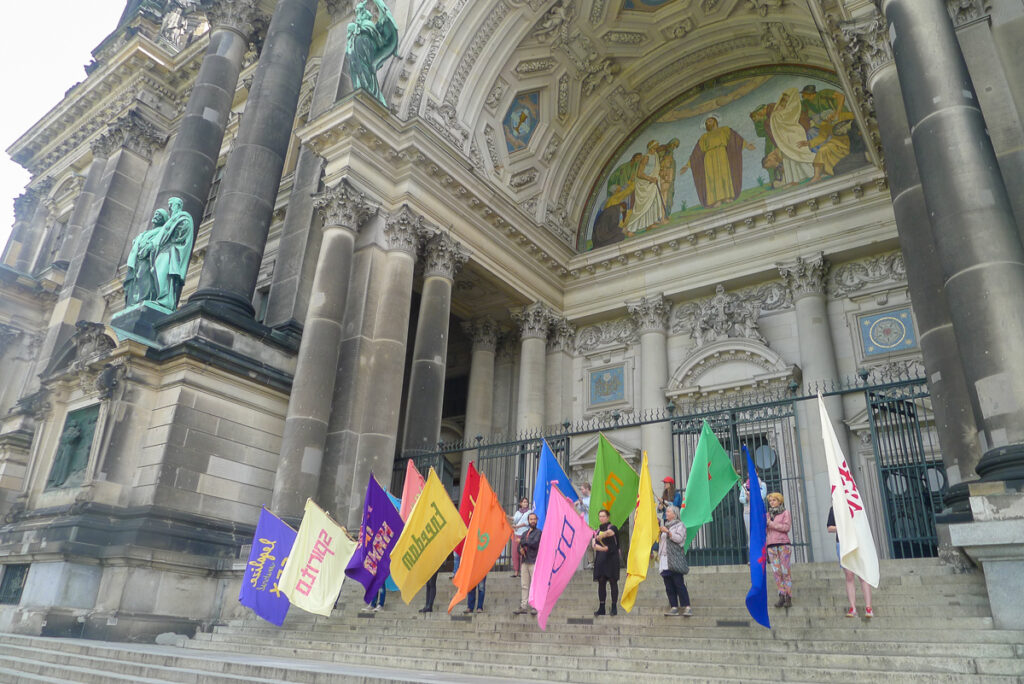 Arahmaiani Feisal finds an answer in flags that bring communities together across the world to support positive values.

Since I was studying at the art school at Bandung Institute of Technology in 1979, I’ve had a tendency to be critical. This brings enlightenment as well as problems, because I live in a society that is basically conservative and patriarchal. This tendency became even stronger after I became an artist and activist. But those whom I criticised never give an answer. So finally I decided, the one who has to answer my question is me!

This is the origin of my activities with the community since returning to Indonesia from Australia in 1986. I began researching the communal life of past traditions. And this opened the way for me to become involved in the Five Mountains Community,

During two years in Sydney, I started to realise the importance of community activities after meeting and hanging out with the Hippie (old) and Punk (originally from the UK) groups. Yes, I learned a lot about various things related to traditional culture and the problem of globalisation. So when I returned to Indonesia, I began to do serious research on the cultural heritage of tradition and the application of the global economic system in the context of my country.

I grew up under the rule of the military regime. We were encouraged and directed towards the idea of ​​”modernisation” and development, which is not oriented to the cultural or communal life but rather directed towards individual lifestyles with an emphasis on economic progress. Before I went to Sydney I didn’t give much attention to traditional cultural heritage, even of Java.

Then in 2006, Yogyakarta was hit by a large earthquake that killed more than 5,000 people. Since then I started working with the Amumarta Islamic Boarding School, the oldest pesantren led by Kyai Jawis Masruri to deal with environmental issues. With the community empowerment strategy (Islamic boarding school community or komunitas santri and villagers), we are working together until now. I act as a consultant and stimulator of creativity. Now on the idea of ​​the Flag Project emerges. It gives birth to two flags with the keywords “Intellect” and “Guts” written in Arabic letters, called Arab Gundul / Pegon Arabic.

I designed the flag which was made by a community of Muslim female tailors from the Minggiran area, Yogyakarta. Until now and the Flag Project has developed into several versions, such as the global version, the Pegon Arabic version and the Nusantara version. Although the key words come from various communities, they continue to be make by these female tailors.

The keywords that come from various communities in different parts of the world show problems that are considered important by the communities concerned. In addition to several communities in Indonesia (Yogyakarta, East Java, Bali) I also work with communities in Singapore, Malaysia, Thailand, Philippines, China, Tibet, Australia, Japan, Germany, the Netherlands, America, Canada, Israel and Palestine. Also the community of universities such as the University of Passau in Germany (where I taught in the last 8 years), Victoria University in Canada, Melbourne University and Victoria College of the Art, Australia.

For the Flag Project, we also work to deal with real problems from community life. This is mainly focused on environmental issues, using an interdisciplinary approach which basically deals with other issues such as social, cultural, and political. So this project also works on the practical side, to find alternative and creative solutions to the problems these communities have to face.

I’ve recently added film to this project, involving a videographer from Melbourne, Gwendolyn Lin, and composer, Monica Lim on a work called Ahimsa (non-violence). And another version of the video art is still on the making in Bali, with videographer: Rudolf Gilmore Perez, another performer: Putu Sridianari, and composer Eira Prameswari. 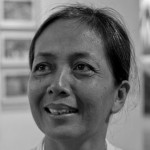 Arahmaiani Feisal is a leading figure in the contemporary art scene in Indonesia, working in performance, painting, drawing, installation, video, poetry, dance and music. She was one of the artists in the Indonesia National Pavilion at the 50th Venice Biennale (2003). Her work has grappled with contemporary politics, violence, critique of capital, the female body and in recent years, her own identity, which although Muslim, still mediates between Islamic, Hindu, Buddhist, and animist beliefs. She often uses her public presence in order to attract attention to violence in general, and violence against women or female discrimination in Indonesia’s Islamic society, in particular. Since September 11, she was combined her critical attitude toward Islam with a fight against its general stigmatisation. And since 2010 she has been working with Tibetan monks in Tibet Plateau dealing with environmental issues. Besides working with various communities of artist, activist, academic in various places in the world, including a religious Islamic boarding school community in Indonesia. She has been taking part on art event such as 2nd Asia Pacific Triennale (1996); Havana Biennale (1997); Sao Paulo Biennale (2002); Lyon Biennale (2000); Werklietz Biennale (2000); Gwangju Biennale (2002); Biennale of Moving Image, Geneva (2003); Venice Biennale (2003); World Social Forum, Mumbai, India (2004); Global Feminism, Brooklyn Musuem (2007); Kunming Biennale(2017); Yinchuan Biennale (2018) and South East Asia Triennale, Jakarta.

We are all leaves on the tree: Ketemu in Bali
Celebrating the huipil – From past to present
Linda Brescia: Holding Up The Sky
A visit to TÜR Studio
Sanggar Batik Batara in Baujeng Village
Batik and tenun as sustainable textiles in East Java
Knotting culture: the muka of Rowan Panther
With the tip of a needle