The world in a tea towel: Weaving cartographic abstractions 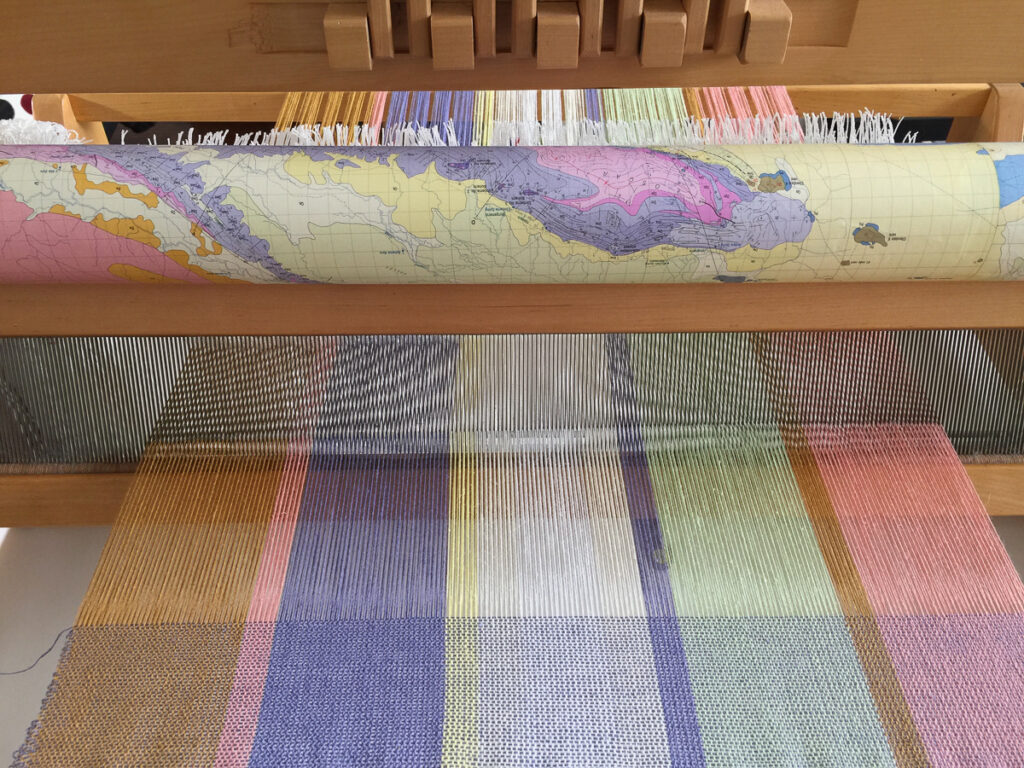 In an exhibition at Holmes à Court Gallery, Nien Schwarz weaves connections to the land, transforming maps into tea towels for everyday use.

On the 11th step going upstairs, my eyes come level with the heddles. And then there she is, in full view, occupying centre stage in my studio. It’s my 80cm 4-shaft 1970s second-hand Finnish-made table loom. I’ve had it for twelve months. I purchased it from Gumtree, sight unseen. It had been disassembled and reassembled, but incorrectly. During lockdown I tinkered, a lot, figuring out myself its correct assembly.

I’ve just finished weaving my sixth warp of crisp cotton-linen cloth. It’s ready to be cut and make its debut. I’ve cleared a long narrow path. Walking backwards I slowly unroll seven meters from the front beam, my cloth clasped to my bosom. From this far end of the studio, I get a bird’s eye view across the length of this cartographic abstraction, my take on making landscape art. From this predominantly white warp, I’ve woven seven tea towels in seven sections. Generous squares in a range of whites are outlined by thin green and blue perpendicular stripes. The whites reflect my concerns of a drying climate and receding glaciers, a touch of irony given tea towels are designed to absorb water.

I first learned to weave in 1996 at the Canberra School of Art where I was researching links between mining, material wealth and how mineral resource extraction is expressed through contemporary art. This included an iconographic analysis of the Yolngu Bark Petitions sent to Parliament House, protesting the mining of bauxite on unceded land. I digressed from my studies to learn from renowned weaver Liz Williamson how to weave with elasticised wool. From that single warp I wove a scarf for my mother in Canada, and one for me, here in Australia, using two different weft palettes to reflect two very different geographies. 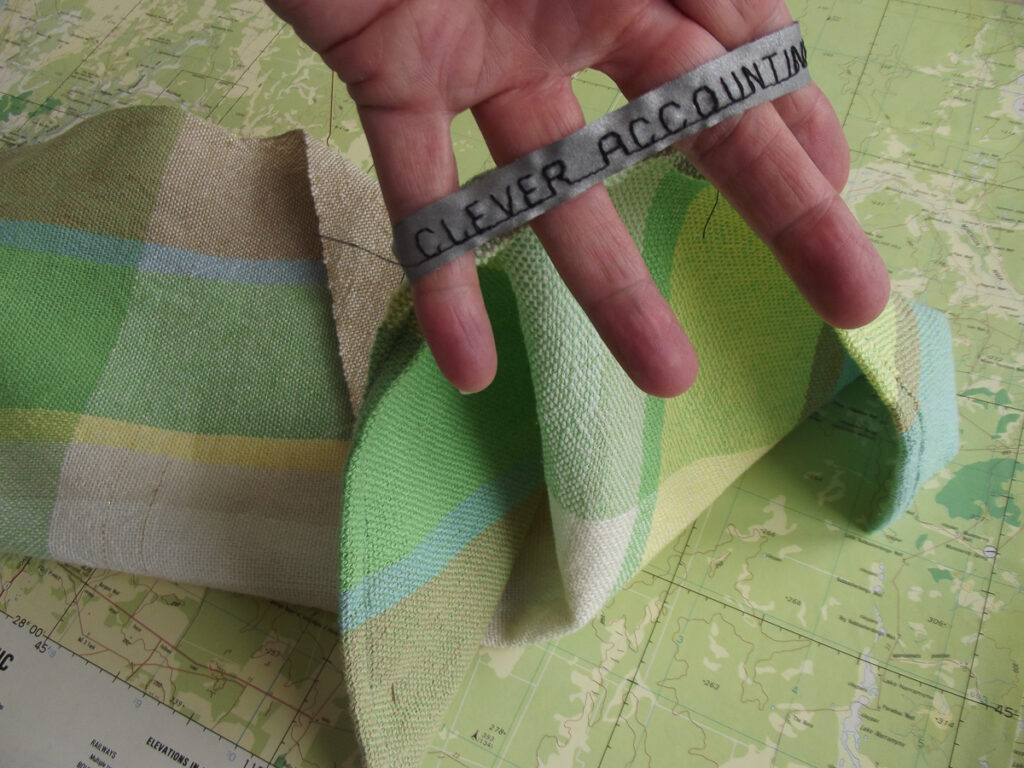 My kitchen towels, woven with abstracted and coded references to land, are a means through which I express mounting environmental concerns. The unprecedented scale of modern agriculture, mining, land clearing, habitat loss, burning of fossils and the production of toxic pollutants as by-products of mass manufacturing and consumerism is wreaking havoc. The Anthropocene, a new term for a new geological age recognises that human activities are impacting the Earth on a geological scale.

My father, a geophysicist, piqued my interest in cartography. His stories about conducting scientific fieldwork deep in the Canadian arctic compelled me to follow suit. At age 19, I packed my pots and bundled my knives in tea towels and headed bush. I cooked my way across the tundra for twelve northern summers supporting Canadian Geological Survey fieldwork expeditions. Since 1993 I have cooked and assisted geoscience mapping and rock sampling in Western Australia.

My gridded kitchen towels, woven with a selective palette of colours, formally echo Australian topographical and geological maps stacked in my studio. I collected thousands of maps during institutional purges of obsolete paper-based knowledge. My yarn colours match map legends that as coded references identify Earth’s different surface areas. On topographic maps green for wooded areas, white for cleared land, and blue for water. Simple. In contrast, geological maps are a marbled riot of psychedelic colours with legends boasting extensive chromatic gradients to distinguish variations in igneous, metamorphic, and sedimentary rock units. Hot pink is my favourite, identifying Archean granite, some of Earth’s oldest exposed rock with which I have a close affinity.

Maps identify natural resources; they are powerful tools. Competing colonial powers attempted to steal maps from one another. Maps of the world beyond Europe bearing European placenames record the dispossession of Aboriginal peoples from their lands. 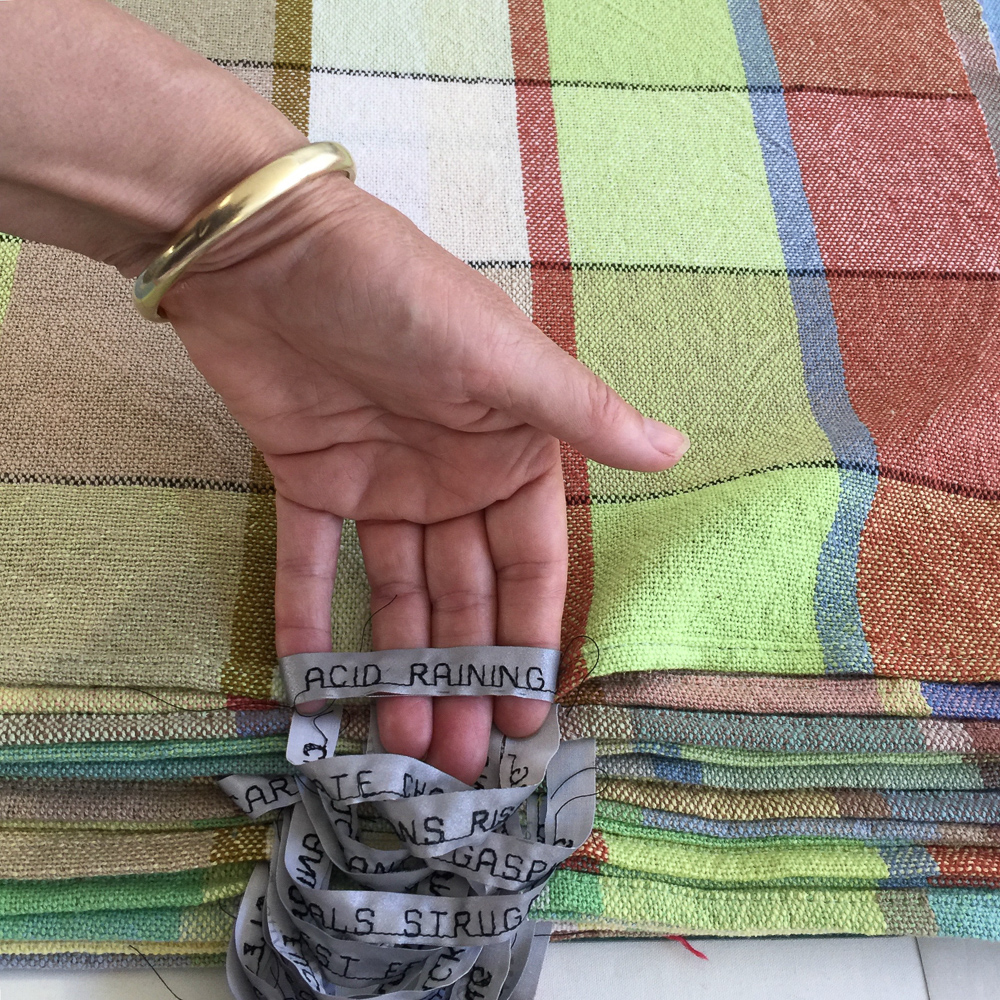 Tea towels originated in the Victorian period when the Industrial Revolution made the ownership of fine china and glass more affordable to a growing upper middle class. Reflecting material values symbolic of personal wealth and refined taste, such treasures had to be kept spotlessly clean.

Tea towels today are generally cheap mass-produced cotton textiles. In contrast, my tea towels are finely crafted with organic linen-rich cotton. Each of my tea towels is unique in colour and pattern, and each can be identified by different words stitched on the towels’ hanging loops, much like name tags.

My tea towels demand we care. Textile care labels stitched into the hems read “EARTH MATTERS” and universal care symbols instructing not to bleach, dry clean or use a dryer.

Other reminders to care are my words, machine stitched on silver reflective sew-on tape used to form the loops from which to hang the towels. This high visibility warning fabric is synonymous with alerting people to situations where personal safety is threatened. The sewing machine automatically underscores the letters it stitches, adding unintended emphasis to my words.

Why do we treat Earth, our mother, with little respect? With respect comes responsibility. The responsibility to care rests in everyone’s hands. My tea towels are humble handheld reminders to extend care beyond ourselves and our misplaced materialistic values.

There’s another underbelly to my practice stemming from my father’s early experiences. Age 7-10 (1942-45) Erik Jan was held captive by the Japanese military, on Java, Indonesia, in camps for women, and girls and boys under the age of 10. Food and medical aid were available but withheld. Boys who turned 10 were relocated into men’s forced labour camps. Those boys didn’t survive. When my father turned 10 in June 1945 the Allies’ advance saved his life.

My father could never talk about his camp experiences, “too terrible” he would mutter, and look away. 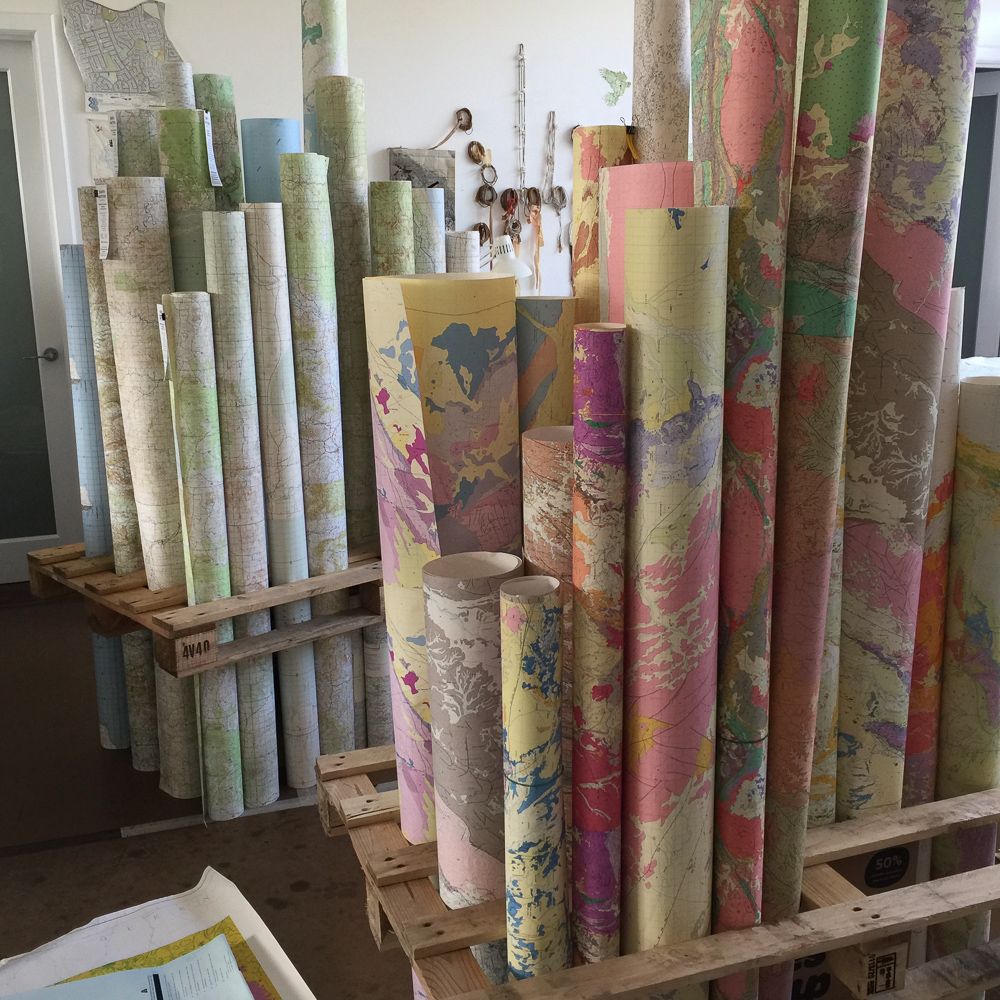 Most of my collection of salvaged maps were printed 1942-45 for wartime distribution in Australia. Amongst them are 1945 maps of Nagasaki and Hiroshima printed months before the A bombs were dropped. In his professional life my father collaborated with Japanese geoscientists. I was grateful he didn’t judge or hate. Our families enjoyed sharing meals and customs.

Each of my tea towels is weighed and priced per gram. In the gallery, they are displayed atop stacks of recycled fruit and veggie boxes, intended to be examined like fruit for blemishes. Echoes of retail are extended to rolls of material sold by the meter. This fabric is made of Australian government printed maps; hundreds of duplicates glued end to end to create long sheets of material. All proceeds go to locally relevant environmental and Aboriginal health care charities.

My cartographic-inspired tea towels, made to be handled and hung near a kitchen sink or cooker, act as reminders that we all have the responsibility to care for each other, for all living things and Earth our mother. My practice infiltrates conventional textile care instructions and designer labels. It disrupts art pricing conventions, the display of finely crafted objects in a gallery context and art’s distribution in the home. My weaving instils responsibility, to respect and care for Earth as a finely balanced system.

This work is exhibited as part of the Indian Ocean Craft Triennial at the Holmes à Court Gallery, No 10 Douglas Street, Perth 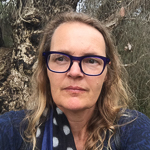 Nien Schwarz’s studio is on Noongar land near Waylyup (Fremantle). She’s a multi-disciplinary artist and researcher who recently retired from teaching sculpture and environmental art at Edith Cowan University. Nien would like to acknowledge Holmes à Court Gallery, the IOTA21 team, and Jane Donlin for the support of her weaving practice.