Up in a wool bag: Moving material in the Navajo Nation 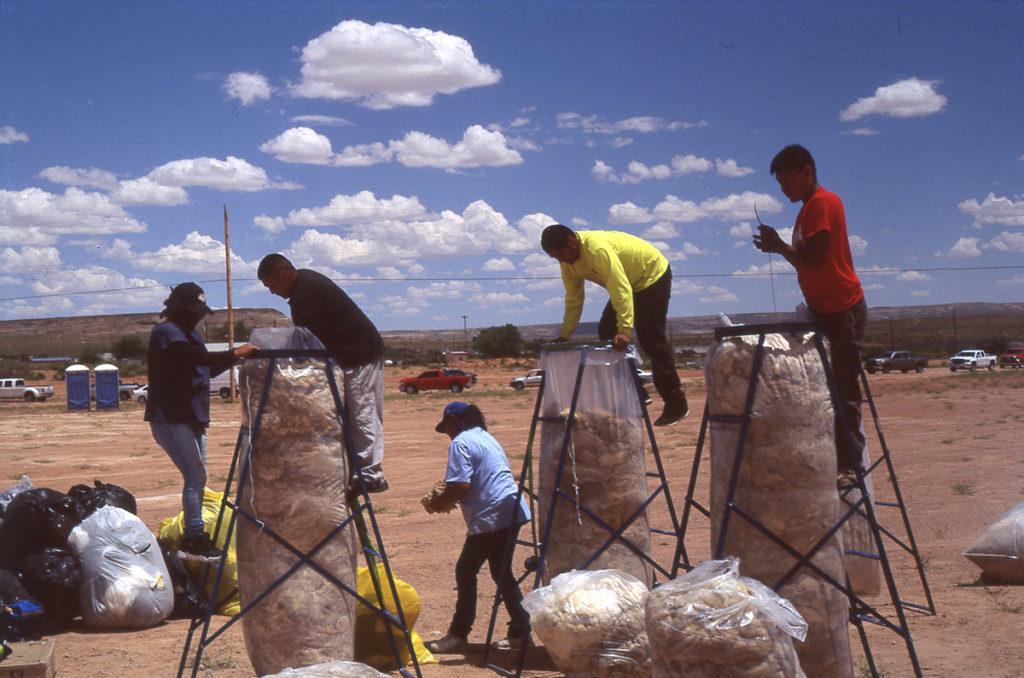 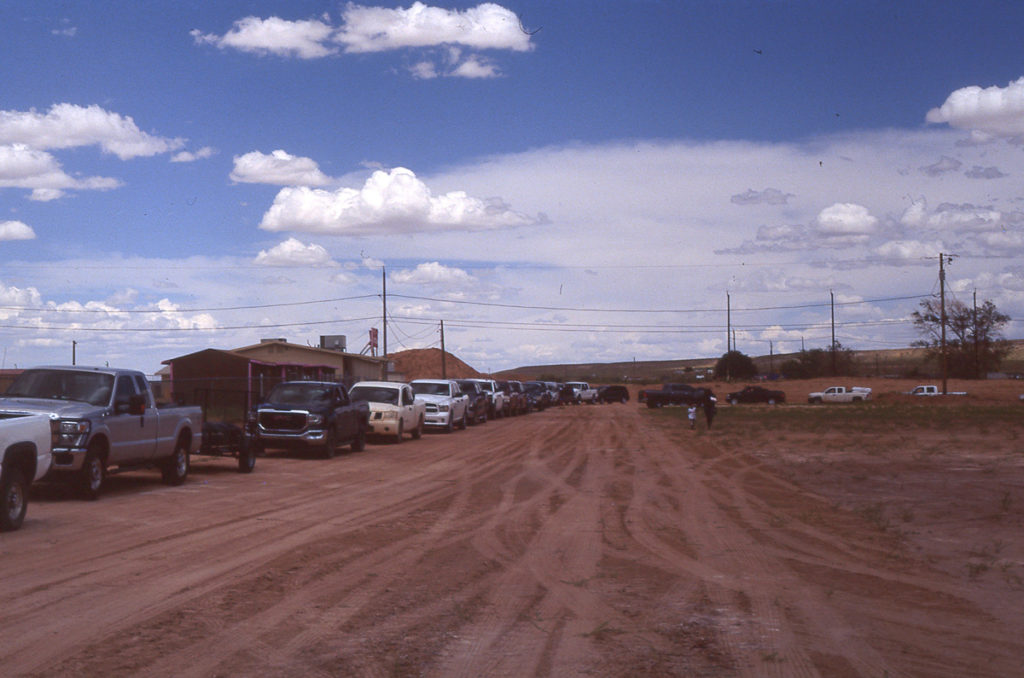 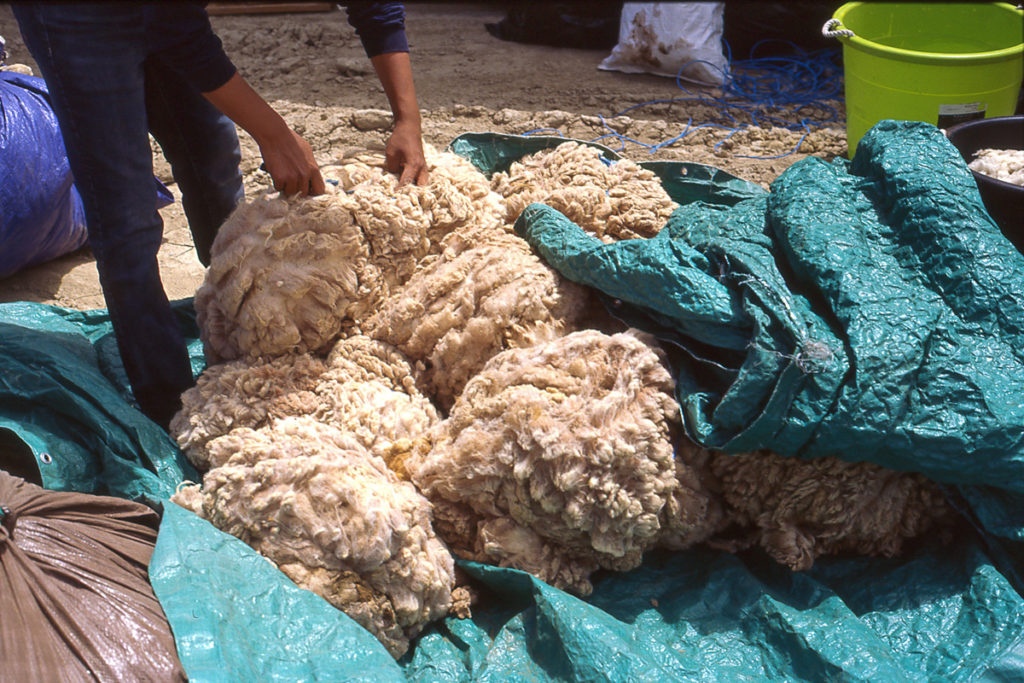 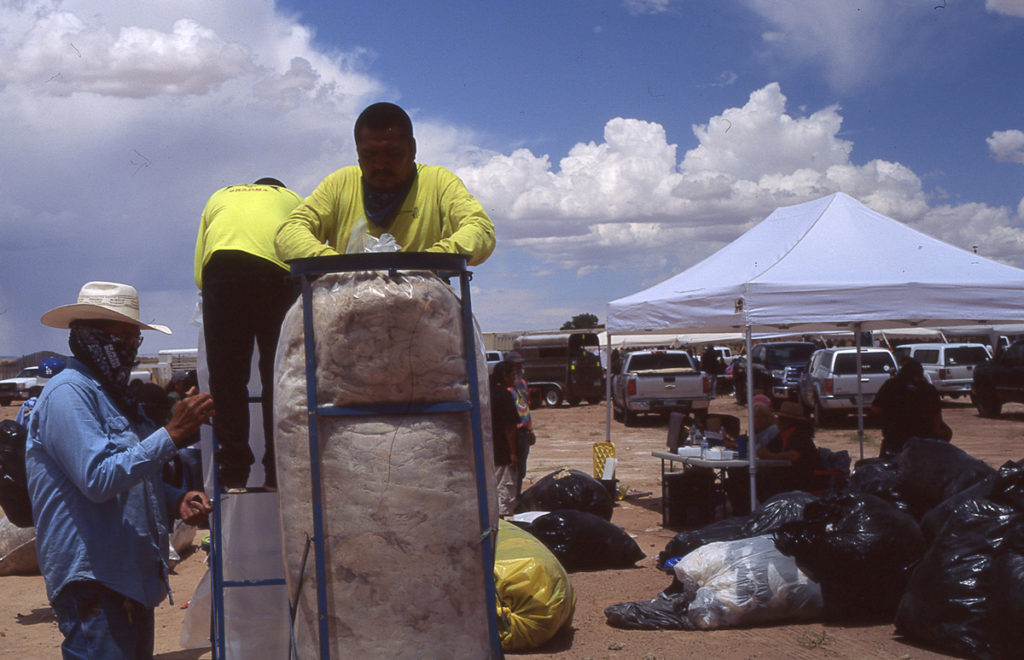 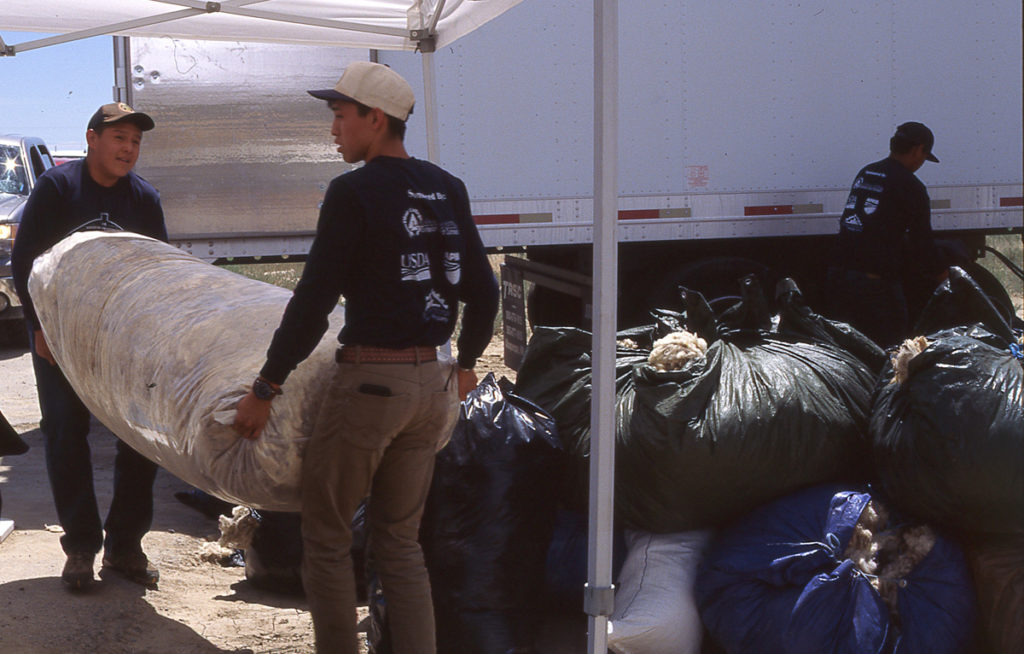 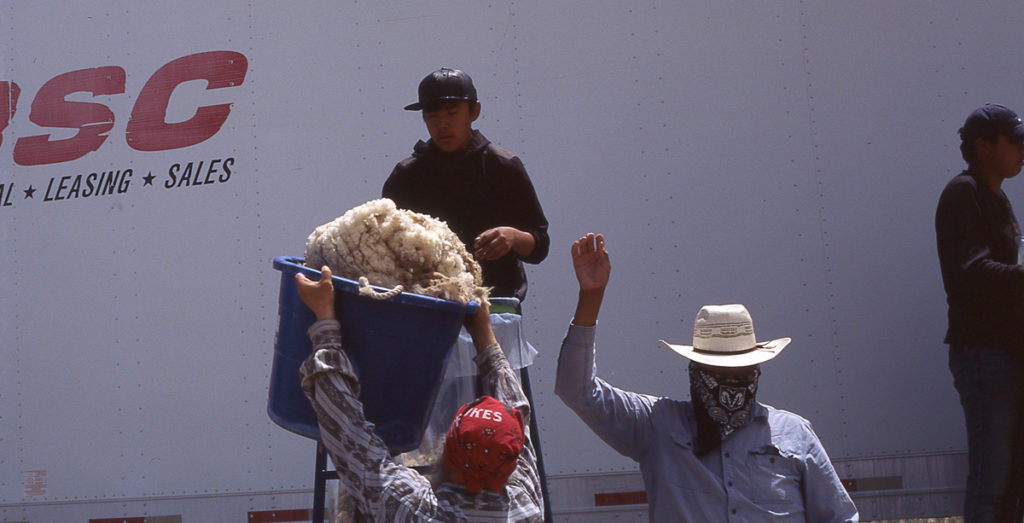 Emily Winter traces the source of her weaving threads and is surprised to find such different scales of Navajo business converging in the wool sales.

This past June, I joined a group of commercial wool-buyers on a buying trip to the Navajo Nation. I’ve been weaving with Navajo-raised wools for several years, thanks to a friendship with Teddy Varndell, a wool-dealer who’s been buying, spinning, and selling Navajo-raised wool and mohair for many years. I’ve become increasingly interested in understanding the pathways and people that make material and production possible, and so this year have started a sort of ethnographic supply chain analysis project, following this wool from its Navajo origins through its various stages of processing. The languages of transparency and traceability have become more and more common in how we talk about the goods we live with, but somehow seem to fall short of actually communicating anything about the ways that material moves, is handled, becomes object. And so I drove from Chicago to the Navajo Nation in June to work the wool buy, talk to people, take photographs, and see where the wool I work with comes from.

The Navajo Nation is the largest Native American reservation in the U.S., covering 27,000 square miles of the Four Corners area of New Mexico, Arizona, and Utah. In June, folks from Midstates Woolgrowers Cooperative Association and Peace Fleece crisscrossed the reservation, buying wool in eight towns in as many days, purchasing approximately 160,000 pounds of wool from over 800 producers. The wool buy grew out of a need identified by the Black Mesa Water Coalition and the Diné College Land Grant Office, for Navajo producers to get better prices for their wool. Until the wool buy started, trading posts were the main outlet for most Navajos to sell their wool. They typically paid a flat price per pound for wool, not taking into account the quality, coarseness, crimp, and color that determine the price of wool in the global market. Over the last nine years, the wool buy has effectively doubled the price per pound by bringing producers into direct contact with commercial buyers. Most of this wool is shipped to a grading warehouse in Ohio, then sold to a scouring plant in South Carolina where it’s blended with other wools from all over the country and sold to processors on the next step down the supply chain.

Sheep and wool have a long history and important place in Navajo culture, reaching back to the first contact between Navajo and the Spanish in the late 1400s. As Anglo settlers and the United States government encroached on Navajo land in the nineteenth century, grazing opportunities diminished. Following the formation of the reservation in 1868, wool became the primary item of exchange between Navajo and the nearby trading posts. Initially, the Navajo exchanged raw wool which was exported back East for use in domestic textile manufacturing. Eventually, demand for woven blankets surpassed that for wool and textiles came to serve as a kind of trading post currency. By the 1930s, the vegetation of the reservation had been depleted by the combination of severe drought and overgrazing. The federal government implemented a program of herd reduction, intended to reduce the strain on the land by halving the number of livestock held by Navajo. Due to poor infrastructure and implementation, the program was unnecessarily violent and traumatic. Today, it’s hard to pin down precisely how many sheep are on the reservation, as people are hesitant to report their livestock numbers due to this painful history.

When I first encounter the wool, it’s in trash bags, burlap wool bags, folded into tarps and bedsheets. Every manner of bag, packed loosely, packed tightly, tied with twine, taped up, knotted corners of sheets. Over the last nine years, word about the wool buy has spread and more and more people bring their wool to one of the buying sites.

When we pulled into Kaibeto, Arizona at 8am on a Sunday morning, there were 70 cars waiting in line to sell. Each day, we’d set up the folding table, scales, tent, bag stands, and proceed to weigh and grade people’s wool. Everything that comes in is thrown in a big pile and a team of people climbs up on bag stands, rips open the small bags, dumps the wool in the big bags, jumps into the bag to compress the wool, sews the bags closed when they were full, then drops them off the stand and loads them on the truck. It’s hot out, dusty, and the dumping and jumping take their toll.

Sometimes the pile of incoming wool seemed to grow and grow and grow, and no matter how fast we worked, we couldn’t make any dent in it. When that pile was growing, you’d want to rip open the bags, taking no heed to the cleanliness of the opening, the integrity of the bag. It is a trash bag, after all. And sometimes those knots were just damn near impossible to get undone. But if you don’t untie the knot at the top of the bag, the wool gets stuck when you try to dump it out. It gets jammed at the too-small, ripped-open opening, and you have to reach in and pull out clumps of wool a handful at a time. Occasionally, I’d come across a trash bag that had been tied such that there were these little knot-tabs that you could pull and the bag would seem to fall open on its own, no ripping, no tearing, just an invitingly open trash bag, its contents fully accessible. The wool would slide out, fleece by fleece, into the big wool bag with just a few shakes. Encountering these knots felt like a gift from the person who packed it, a nod of acknowledgment to the next person down the line.

One of the things I find most fascinating about this whole operation is the way you can see how specific and diverse and individual the things that make up a commodity are, that they come into the buy in a family car, as separate and unique materials with specific origins. The wool buy is the point at which the material begins to become general, blended. It becomes WOOL instead of so and so’s wool, which came from this town, and oh they heard about the wool buy from their cousin that morning, so ran over and picked up their grandma’s bags of wool that had been sitting around a few weeks, and thought they’d come over to see if they could sell it. It’s a material with a specific volume and character, that has occupied a particular place in a household’s physical, mental, and emotional floorplan. That specificity is lost once the wool is packed and pooled, but I’m becoming more convinced that that is okay. Single-origin sourcing is only one approach to tackling the question of ethical materials, illuminating the pathways and processes that shape our materials at a larger scale is another. 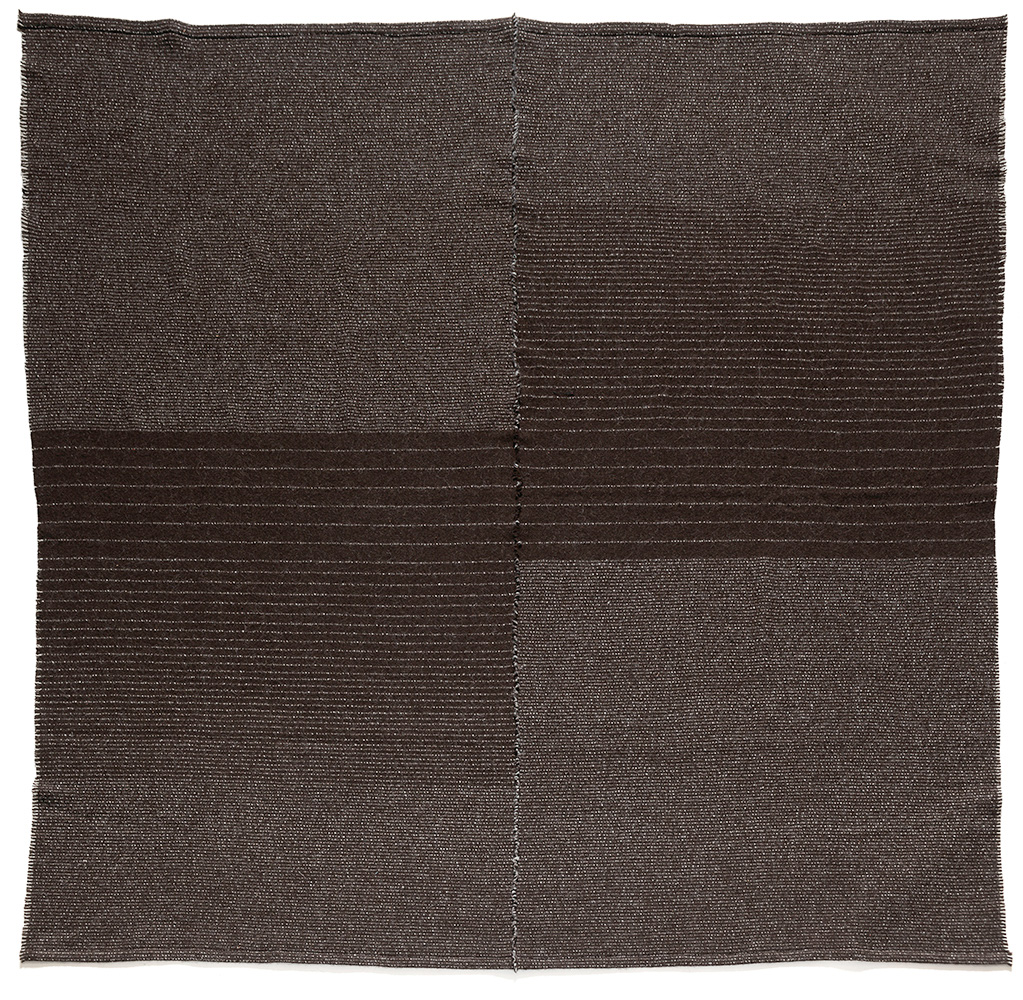 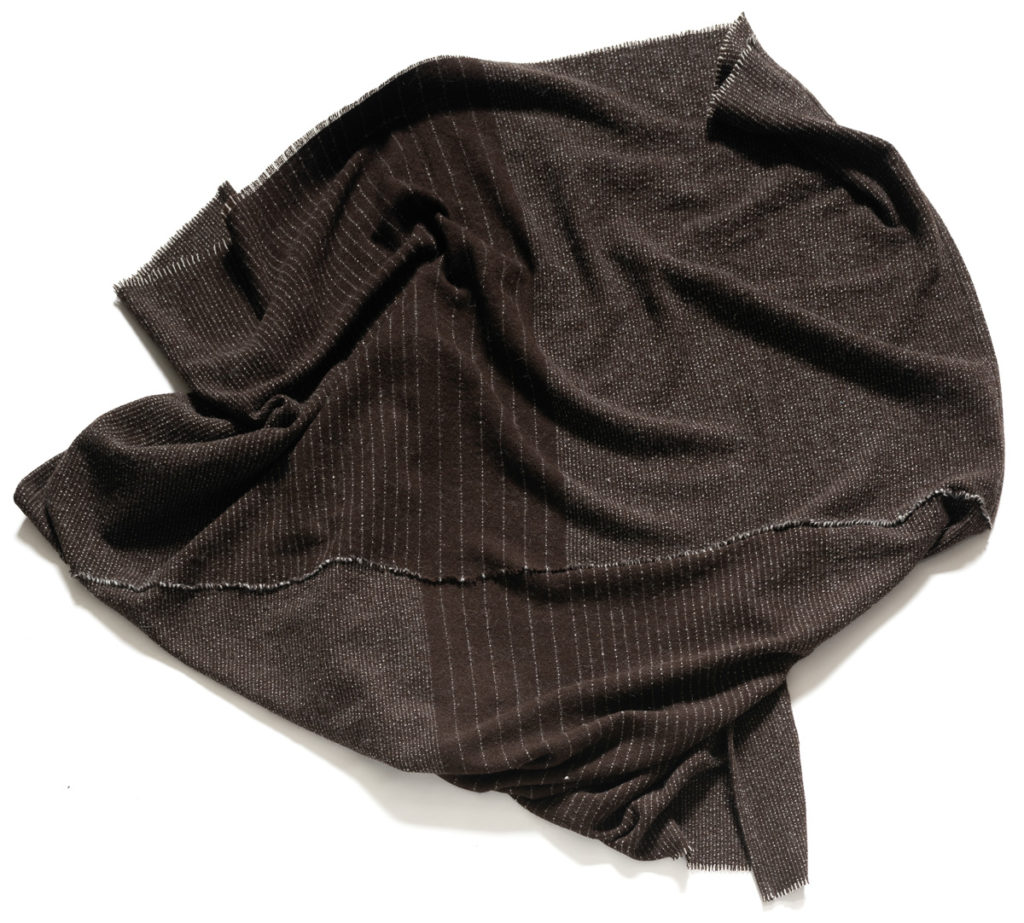 National Research Council. Changes in the Sheep Industry in the United States: Making the Transition from Tradition. Washington, DC: The National Academies Press, 2008. 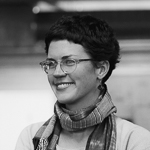 Emily Winter is a weaver in Chicago. She runs The Weaving Mill, an experimental weaving studio that blends design, fine art, textile education, and research-based practice in the context of a repurposed textile manufacturing facility housed in a day program for adults with developmental disabilities. Her wool supply chain research is supported by funding from the Center for Craft, Creativity, and Design in Asheville, North Carolina.

To rescue a world on the wane: A clarion call to woodworkers
What makes the cotton made by TaiLeu so good?
Yilaalu - objects for carrying stories
Craft classic: New moves for the old sari
Developing fabric designs at Ikuntji Artists
Batik exchange: Wahyu Subiyantoro Soediro
Can Suzhou Embroidery be contemporary art?
Quarterly Essay ✿ Of time and the city