What is a knife? 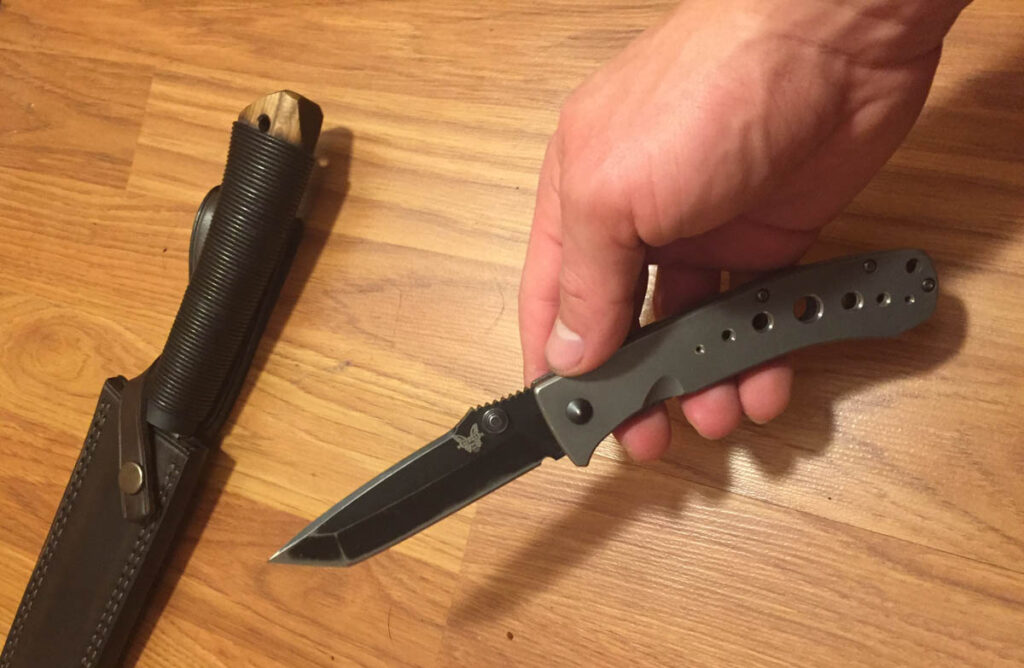 Which came into existence first: a knife, or the idea of a knife? Or does it even matter?

Knives are interesting. In the Iñupiaq language, the language of the indigenous peoples of the arctic, we have two words for cutting tools: ulu, and savik. An ulu is a big single curve with the cutting edge at the bottom and handle on top. Imagine the English letter “U”, and if the lines at the top came together, stretching out on either side at about 45 degrees, stretching out the bottom curve of the “U” wide, and you can almost picture what an ulu is.

Some groups of Iñupiaq sharpen both sides of the cutting edge while others sharpen only one side. I don’t know the reason for this. The word “ulu” translates into English as “woman’s knife”. Savik translates into English as “men’s knife”. A savik is what most people think of when we say the word knife. It is longer than it is wide, has a handle on one end and a blade on the other end. Generally speaking, knives of this sort can have cutting edges on both sides of the blade and the blade comes in an almost infinite variety of shapes and curves. We have kitchen knives, bushcraft knives, multi-tool knives. Knives, knives, knives.

But what is a knife? The basic essence of a knife? Beyond cutting, that is. What is it, to cut something? To take one thing, cut it with a knife, and let there be two things that can never be joined again? It is a wondrous and magical event almost.

I don’t understand what happens at the cutting edge of a knife. I know and can sort of conceive that the blade fits between the cells of the work piece, let us say a piece of wood, and the bond holding the material of the blade together is stronger than the bond holding the wood cells together, and the knife pushes its way through the piece to make kindling for a fire, or chopsticks, or any number of things.

But that’s just a technical definition of what is happening physically. Maybe my wonder stems from some underlying fascination with living in this physical world. I remember when I was a child I used to wonder why we were all forced to walk from one side of a room to the other, or anywhere for that matter, and why we couldn’t just “wish to be there and be there”.

And then there are things like a glass of water: dip the knife blade into the water, the water separates around the knife and joins back together again as if nothing had ever happened to it when the blade is withdrawn. Has the water been cut? I don’t think so.

Hence my wonder at cutting something like a small piece of wood. Cutting the wood seems fundamentally different in some mysterious way, beyond the calculus of writing up the electrical bond formulas of the cellular structure of the type of wood and comparing that with the technical specifications of the materials and processes that make up that particular knife doing the cutting.

So these hard science questions of what constitutes cutting get me nowhere significant. Leaving those “real” questions behind is much more interesting. What if a knife is a physical manifestation of what makes us human, our conscience? Does that mean we were not human until knives became in widespread use around the planet by hominids? Again, I don’t know. But it’s interesting to think about.

How does a knife represent our conscience? It’s the temporal aspect of both. When that small piece of wood is cut to make a wooden spoon because spoons were not packed for the camping trip and the only food to be eaten is “spoon eating food” and there is an abundance of perfect “make a spoon out of me shaped pieces of wood just laying about waiting to fulfil their destiny”, there is a moment in time before the blade first ever touches the bark, then there is after that moment. And once the cut is made it is impossible to go back in time and change it.

Even if the small piece of wood was somehow like the glass of water and could be joined again as if nothing ever happened, it still did happen. A cut was made. Just so with our conscience: there is before something arises in our conscience, the event, and after, and there is no going back to the before. That magic moment that comes to us “out of the blue”, that little voice that tells us to do something or to not do something, can be easily seen as the cutting edge of a knife. We do not know from whence that voice comes or whether it goes; it simply is. The time aspect of this is represented in the knife by the two sides of the blade, before and after. 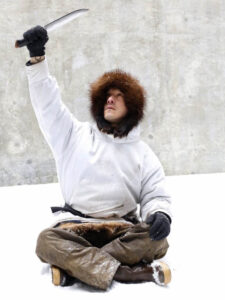 By definition, a knife has only these two sides, joined by the edge. But that leaves me with only more questions. What does the other side of the blade mean if the blade has only one edge sharpened and the other remains flat? What if the blade is double-sided? What is the handle in all this business? Because one has to grasp the handle of a knife to use it after all. Is the handle the representation of our body? Our mind? Our “capacity for rational thinking”?

And we haven’t even begun to wonder about the chemical composition of the metal and processes used in bringing the piece to completion. Master blacksmiths figured out that magic thousands of years ago, long before “science” was hanging out. A blade could be made with all the right ingredients, but if the heating and cooling process in making it was out of synch, the whole thing would end badly. The blade would chip and shatter at first use, or be too soft to hold a functioning edge. Map that onto our developed sense of what is right and what is wrong.

And I argue that the creation of a real human being is that carefully mapped out process that we learned how to do many thousands of years ago, the process that results in a person that navigates their existence according to their conscience, successfully. They live in harmony with their place and their people. But we all have that same cutting edge within us, and in that moment when something arises on our conscience, we are all the same. What we choose at that cutting-edge moment is an individual choice that can, by definition, only be decided by us.

Do we listen to the voice? Do we deny and try to pretend it did not occur? Of course, we do all of that, myself included. After all, I am a real human being. 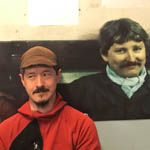 I currently live in Fairbanks, Alaska with my honey and our two young children in a dry cabin, meaning there is no running water hooked up to the house: we haul all our water from a stream that runs year-round (even in the middle of -50°F). Since I have a job that pays more than $8,000 below the federal poverty level I’ll omit any description of that and instead say that what I do is try to be a good partner to my wonderful wife and help raise our beautiful children in the best possible way, showing them what is best in this life. I’m also in the process of writing a book, titled “Snow Talk: How Indigenous Thinking Will Not Save The World”.

A clay voyage across the Pacific—Omnus Terra
Presha’s Coverlet
Dancing with the anvil
Catharine Ellis and the journey of True Colors
Tying down art in my own public Idaho
JD Harrison ✿ Centerpiece for a crafted future
MAOTA: Five yarn dyed colours, inspired by Aizome
Nature craft