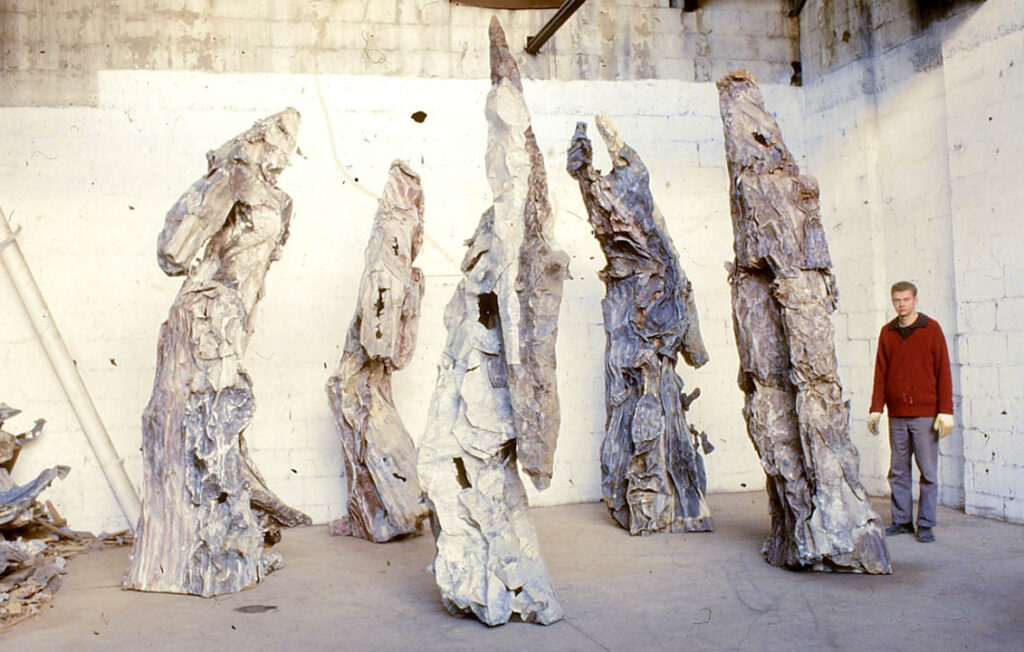 Gregory Pryor reflects on the career of a sculptor whose drive to dissect the world takes surprising forms, including breadmaking and musical performance.

Well before Victor Meertens first brought a sledgehammer to bear on a rusted old sheet of corrugated iron, pounding it until it wrapped around a complex wooden armature he had constructed, he had already developed a strong affinity for and understanding of the material and visual language of found materials.

By their very nature, many manufactured found materials are off-cuts, remaindered parts of something whole that existed somewhere else. When we were both studying art at RMIT in the late 1970s, the CBD in Melbourne was desolate over the weekend, and we would walk through the city to investigate the various industrial skip bins, laden with discarded parts from building sites and retail fit-outs undertaken during the week. The sense of excitement and anticipation at encountering them was no different to perusing the range of brushes and paints in an art supply shop. 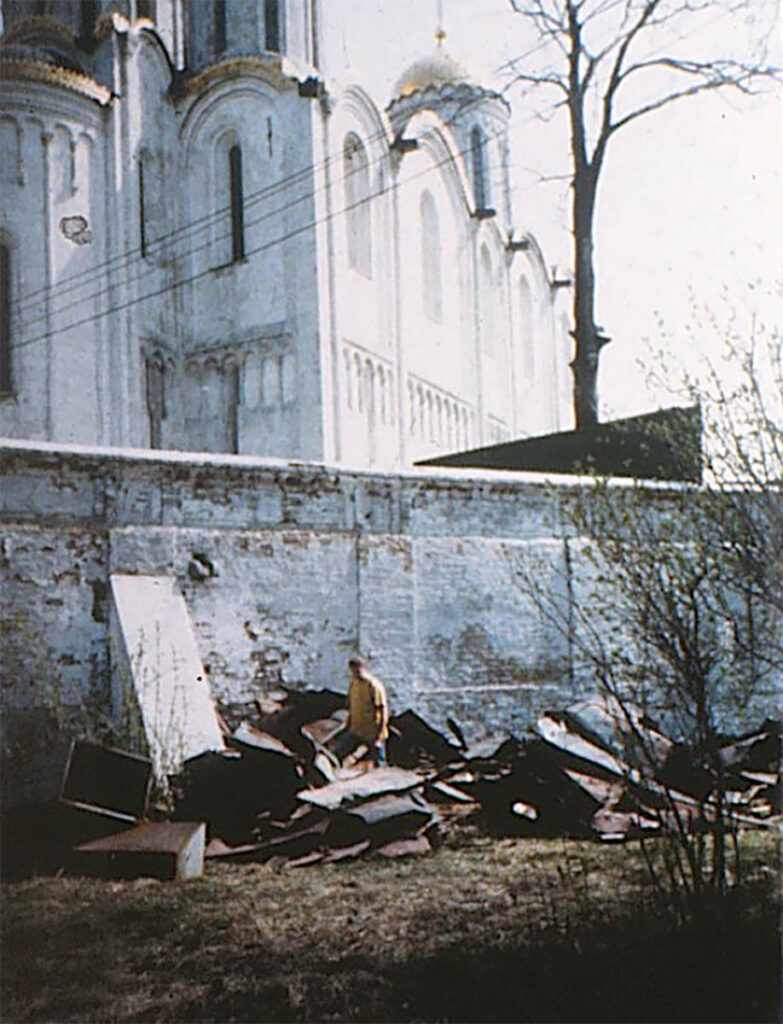 In the mid-1980s, the inner Melbourne suburb of Richmond was undergoing a transformation, with many iconic factories being demolished to make way for residential development. The timing was perfect for the development of Victor’s work, with an early body of found object work derived from wood and sheets of tin procured from workers who were demolishing the old 3-4 storey terraced houses to widen Punt Road, a major arterial road in Melbourne. A grand total of twenty dollars in “beer tokens” (two slabs of beer) provided enough of the local vernacular material to construct nearly all the works. 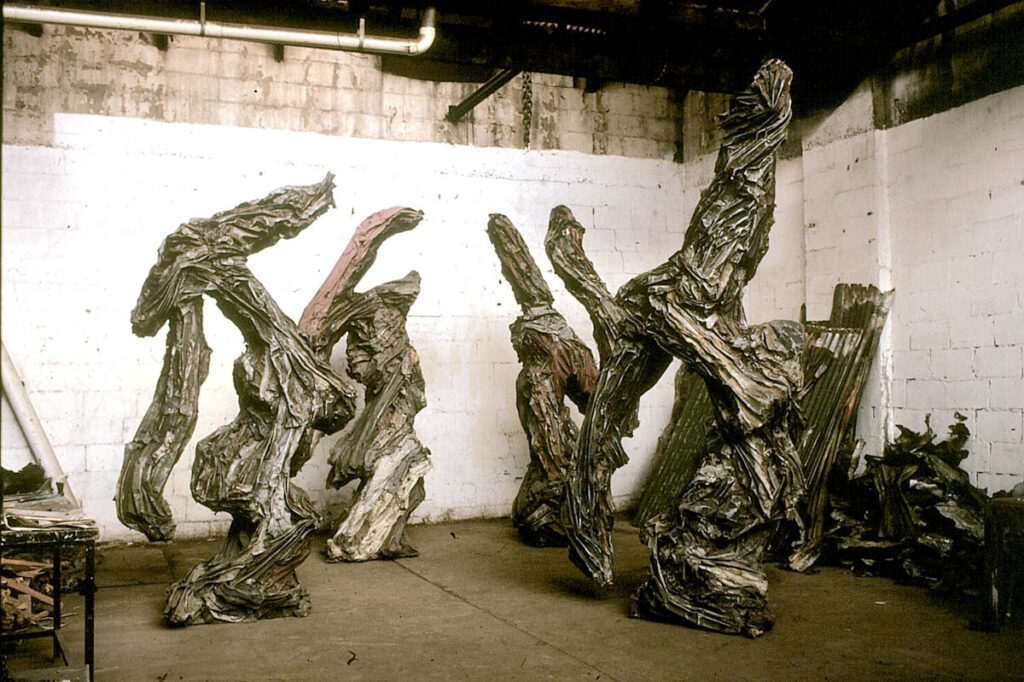 Within a few years, working from the eponymous Caravan Studios located in the old Victoria Furniture Company building, Victor’s ability to work with corrugated iron had clearly advanced, as he was prepared to pound the found objects in a way to extract something more figurative and human from the material. The fact that corrugated iron was engineered to provide a stronger membrane for roofing than flat sheeting added to the potency of Victor’s manual flattening and shaping process. In the earlier image from 1987, the forms are more totemic and static, but in the series from 1989, he extracts a surprisingly fluid movement and vitality from these inert materials in a clear display of technical virtuosity.

When I put it to Victor that this work reminded me of the pleated garments hanging from the body in classical sculpture, he replied with a series of images from the more expressive Northern or Germanic renaissance; the twisted and broken crucifixions of Grunewald or the graphic distortions of Lucas Cranach, where the folds of fabric resemble makeshift poultices, unable to suppress the pain and discomfort within.

Of note in these two images, is that the “off-cuts of the off-cuts” share the floor, piled up respectfully in the margins of the more complete pieces. This ability to find value and potential in the increasingly reduced size of offcuts (and to exclude any waste whatsoever if possible) is a consummate skill to have in a maker. 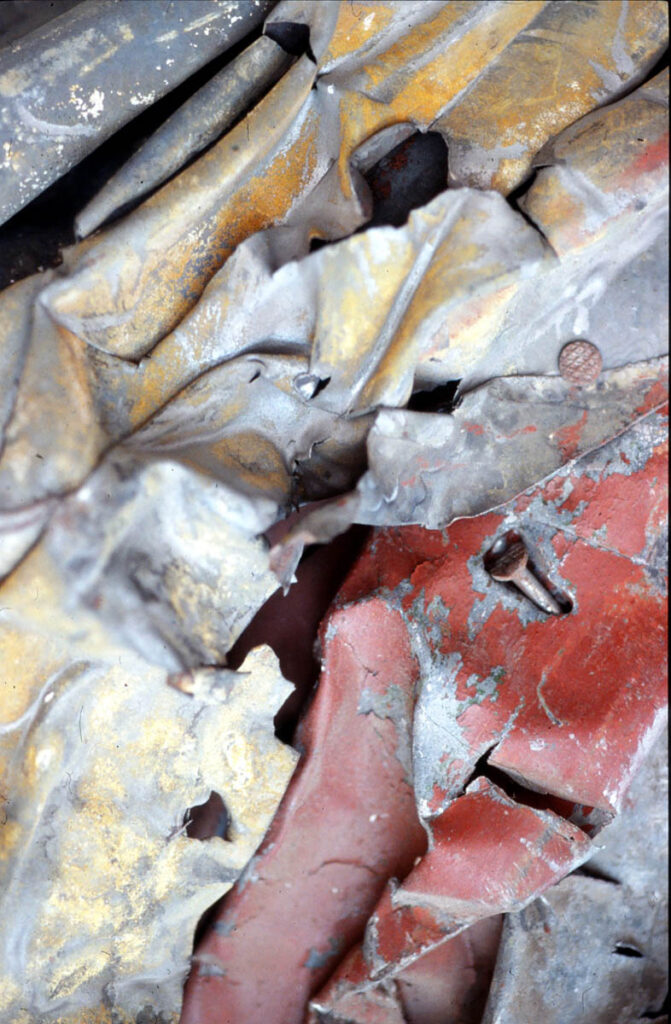 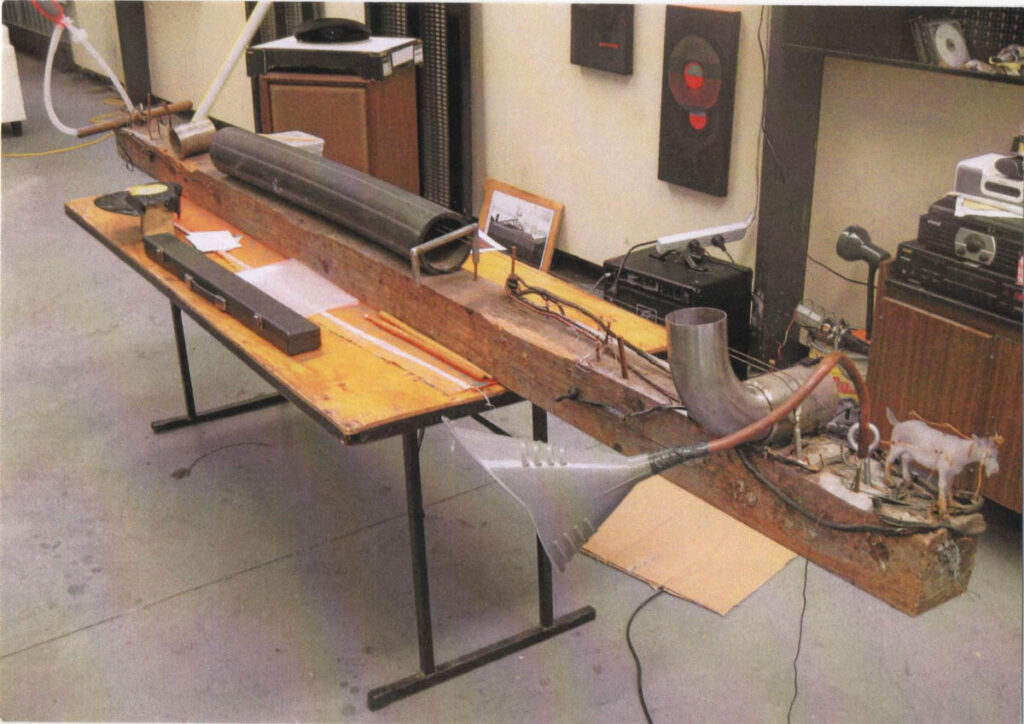 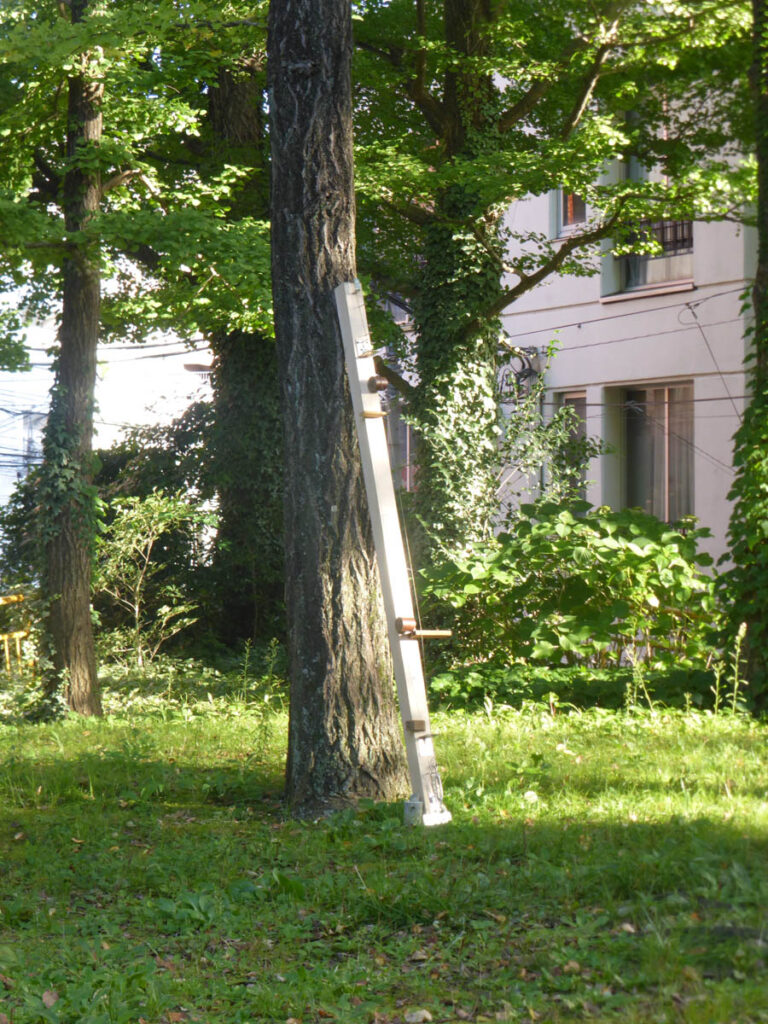 Victor Meertens, Longwire, 2019, instrument made in Tokyo from pinewood post and found objects. Image shows instrument abandoned in a park in Saitama, Japan, three days after being made. Photo: Victor Meertens.

Along with the adjusted patina that movement and exposure inflict on such rejected material, I also want to propose that Victor was attracted to the accumulated sounds this material had been subjected to. This suggests that the noises associated with cutting and breaking down become conceptually imbued in the fragment, along with other noises that result in fragmentation, such as smashing, crushing, scraping, burning, piercing and shattering. The machinery and tools responsible for these noises have collectively composed an atonal symphony aligned to each piece that adds to the visual properties Victor seeks as a starting point for his own compositions. The making of objects from off cuts like these can therefore be inextricably associated with an acoustic reverberation that Victor later realised through the making of experimental instruments such as the Longwire and the Goatophone. The inventive joinery applied to the instruments was further expressed through the sounds they produced and improvised vocalisation, as we can see clearly in this work performed at Tarrawarra museum in 2012.

Receiving the Australia Council residency at the Kuenstlerhaus Bethanien in Berlin in 1994 was a catalyst for Victor. The fluidity and malleability that had appeared in the hard materials he had been using, shifted into the making of bread as a primary creative process. At first, this seemed to be a rather abrupt shift in Victor’s practice, but soon it was evident that the elasticity of bread dough echoed the sinewy properties he had ultimately extracted from the galvanised iron. The bringing together of flour and water, followed by vigorous kneading, created a dynamic of contrasts wholly suited to his sensibility. 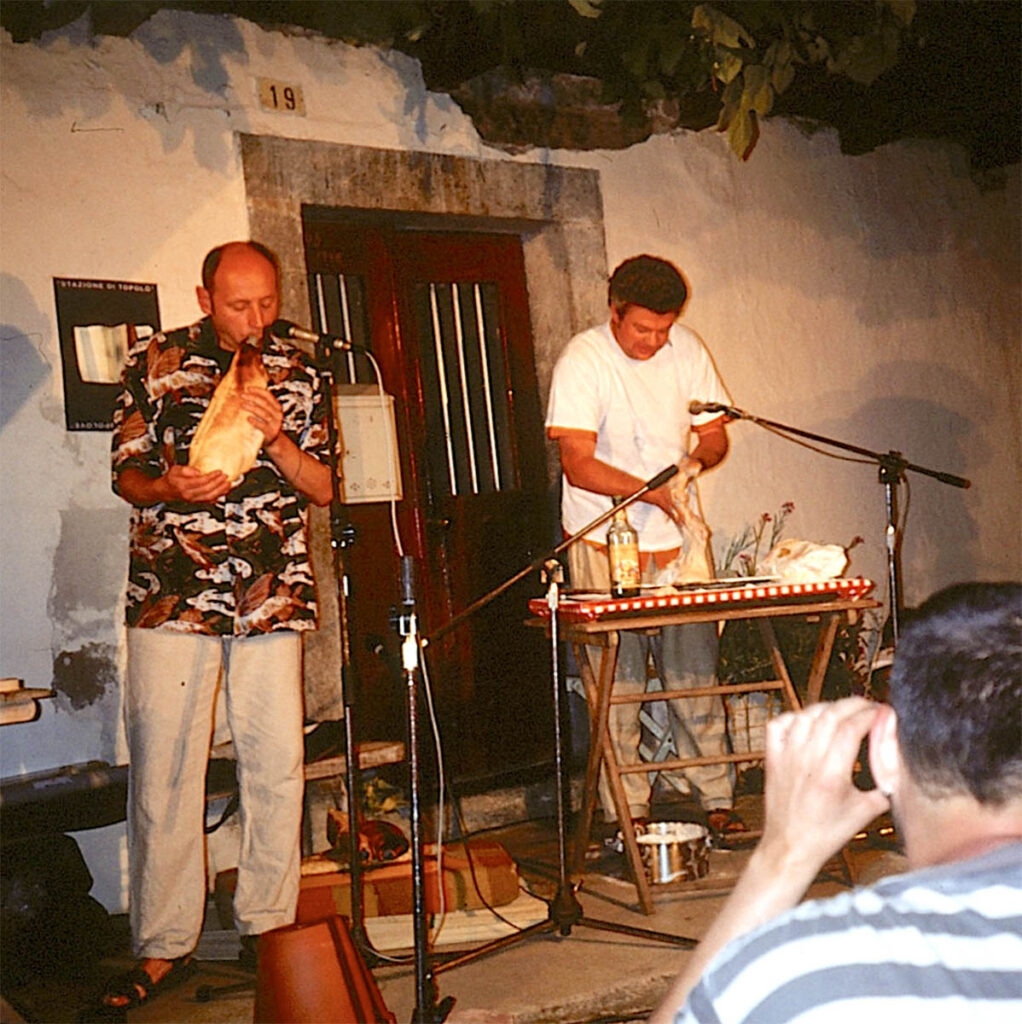 Now equipped with a creative vocabulary that was tactile, sonic and visual, it was not surprising that the performative stream gathered momentum in Victor’s practice. In Berlin, Victor started to collaborate with the German composer/improviser Werner Durand on a series of projects, where various pipes (or horns) that Werner played were baked inside breads that Victor had prepared. Both making and performing were miked up ensuring that it wasn’t just flour and water being intermingled, but also the improvised utterances that Victor projected into the alchemical mix. These sounds didn’t readily lead to comprehension, although at times, fragments of narratives, declarations, manifestoes and confessions could be recognised. In other words, Victor’s vocalisation combined a spontaneous collection of offcuts that expanded with the yeast. Similar to the building detritus and offcuts that have occupied the margins of more identifiable structures, these exhortations also stemmed from Victor’s immense knowledge and experience with art, literary and musical history. 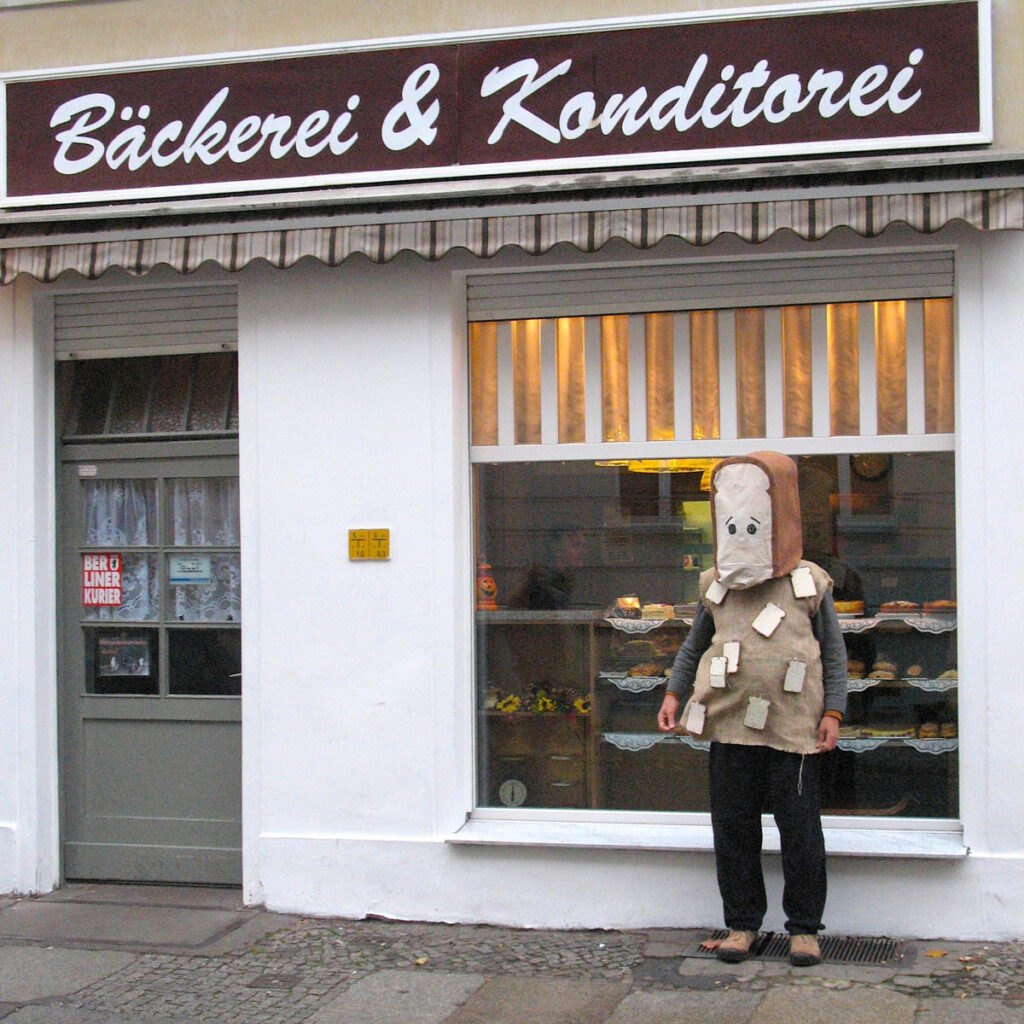 Victor as the Breadman, outside a bakery in Berlin, 2008. Photo: Juergen Walter. 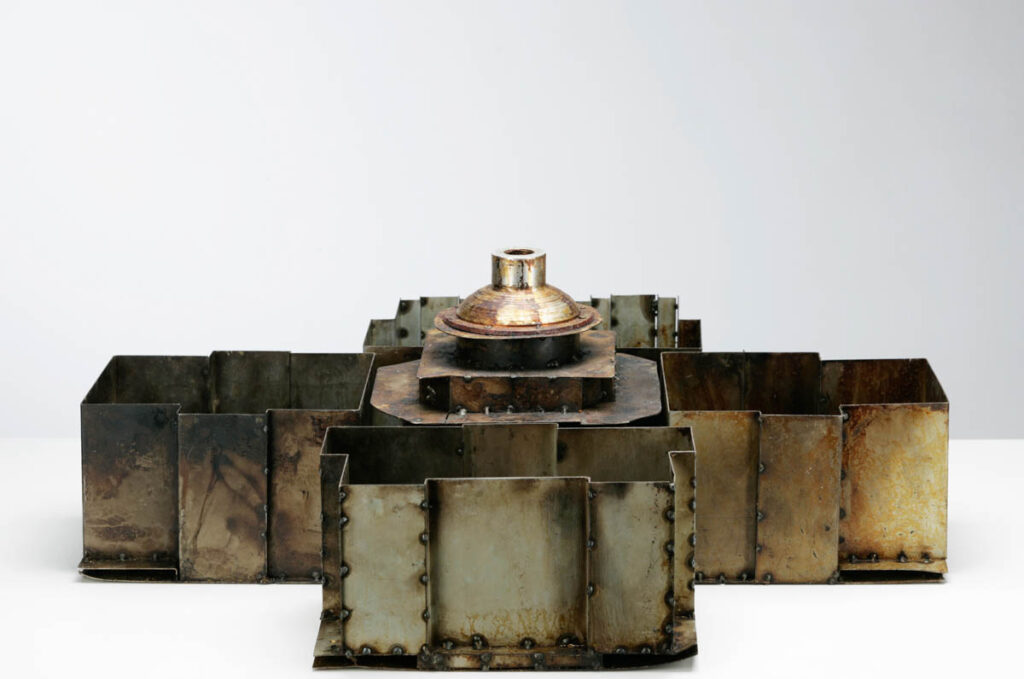 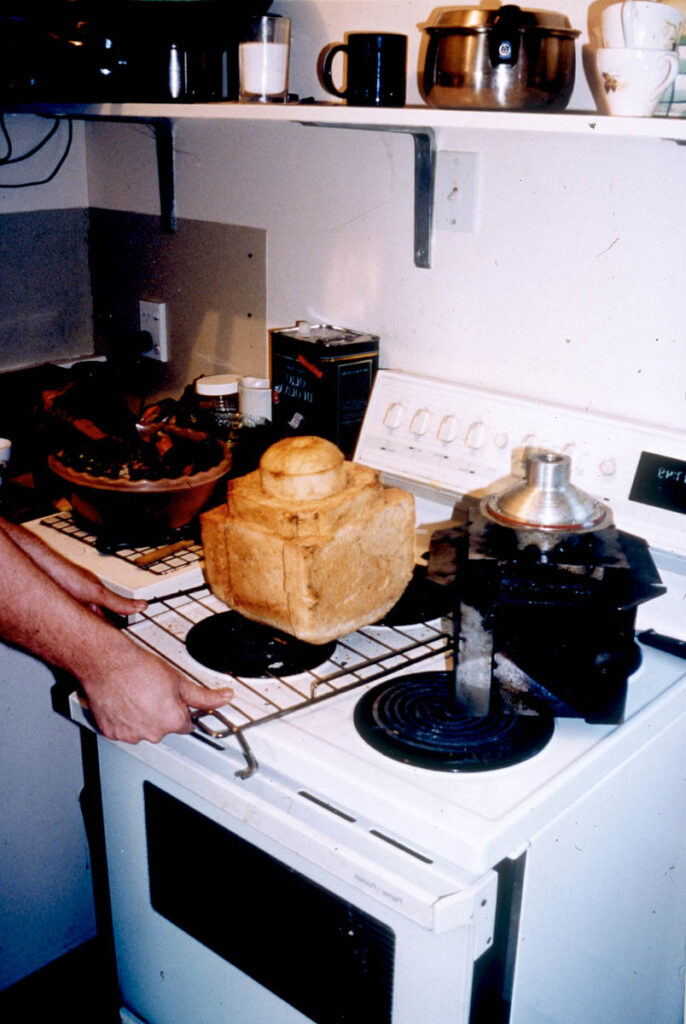 Such an approach to making means that the object as an outcome becomes somewhat tenuous or fleeting. Here, the resultant dough not only wraps up Victor’s improvised vocalisation and breath but also entombs it for baking with a length of pipe, before being “played” by Werner, who intermingles his own improvised breathing through the Hornbread, ultimately releasing Victor’s energy to the audience and the environs. This embodiment with a loaf of bread would reach its apogee in later musical improvisations or performances, when Victor would actually become the Breadman.

For an exhibition at the Serjeant Gallery in New Zealand in 1999, Victor made a model of the historic cruciform building in the form of baking tins and the public was invited to use one “wing” of the model to bake a loaf in the form of the museum. This work suggested that art and culture are just as essential as the daily bread for a full and healthy life, or that the daily bread is one of the most enduring embodiments of art and culture. 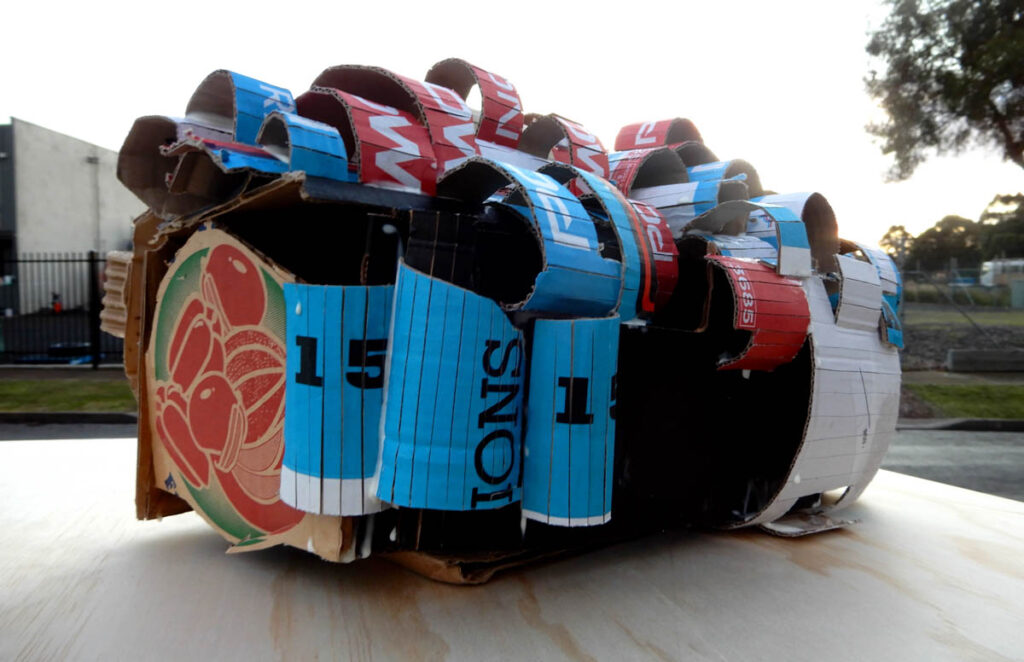 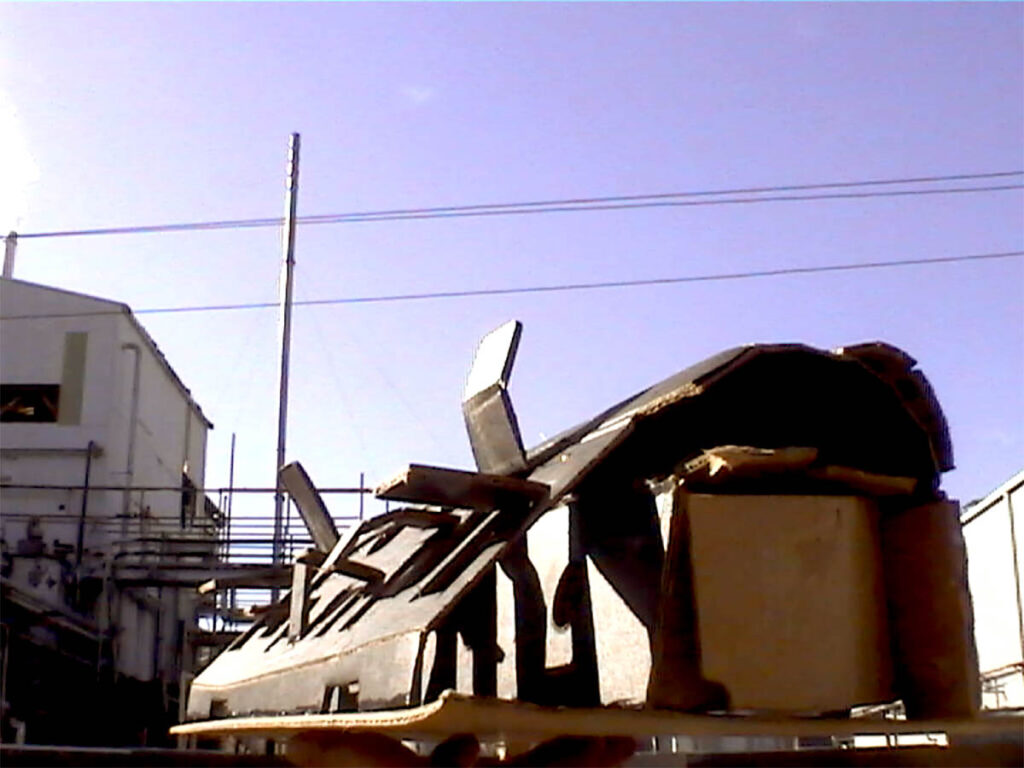 From the mid-1990s, Victor also began transforming cardboard fruit and vegetable boxes into architectural models. As he cut, bent and joined these boxes into reconfigured containers for people, reminiscent of recent design projects in the Netherlands, each finished piece was held at arm’s length in front of a particular setting for documentation and adjustment of scale. This type of conjoining has been a persistent aspect of Victor’s work and could be seen to be more important than presenting it in the sterile or neutral environment of an art gallery. This has also been the case with the musical Longwire instruments he has made over the years from found objects and discarded offcuts. These are not simply precious instruments that sit in a case and only taken out for rehearsal or performance, but Victor sees them as participants or activators in our civic life. 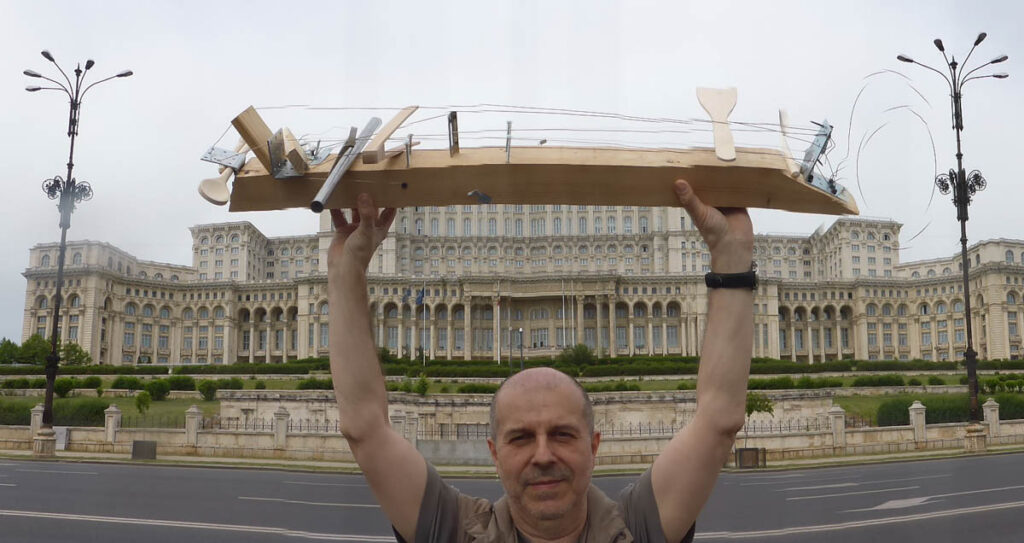 Iosif Király holding Victor Meertens’ Longwire in front of the Palace of the Parliament, constructed during the totalitarian regime of Nicolae Ceaușescu, Bucharest, Romania, 2015. Longwire was made for a performance in MNAC, the National Museum of Contemporary Art, housed in a modified section of the Palace. Photo: Victor Meertens.

This image of the Romanian artist Iosif Király holding one of these instruments triumphantly over the Palace of Parliament in Bucharest (popularly known as the “Ceaușescu Palace”) is a gesture of the liberating quality that Victor sees in these instruments. The raw expressiveness so characteristic of Victor’s performances is a strident contrast to the silencing of human expression in a repressive regime. In times of civil unrest, and on a much larger scale, one can see such a collection of miscellaneous materials and objects hastily assembled in barricades erected in sites of significance. These impromptu structures often bring together the unwanted detritus of urban living, such as broken furniture, old car tyres, flooring or playground equipment, to create structures of protection, defiance and strength (See Katie Engelhart’s photograph no. 7 in this link to the Euromaidan uprising in Kyiv in 2013-14).

Perhaps the most fitting affirmation of Victor’s interest in the conceptual, tactile and even spiritual potential of working with found objects and off cuts, took place on a pilgrimage to Russia in 1992, to visit the Assumption Cathedral in Vladimir which housed the wall paintings of the great Russian icon painter Andrei Rublev. Victor and his partner Helen were initially refused entry as they were not part of an official tour group. From their hotel room, however, Victor noticed a pile of junk or building refuse next to the cathedral, which he immediately went to investigate, as if this was the real objective for such a pilgrimage. The Catholic and Eastern Orthodox churches also have a long history of revering “offcuts,” the relics of holy figures, and by utilising pressed tin ex-votos of body parts as conduits for prayers of healing, of ‘becoming whole” again. For Victor, this pile of anonymous material next to such an imposing edifice is an essential ingredient that makes making a truly whole and worthwhile experience. 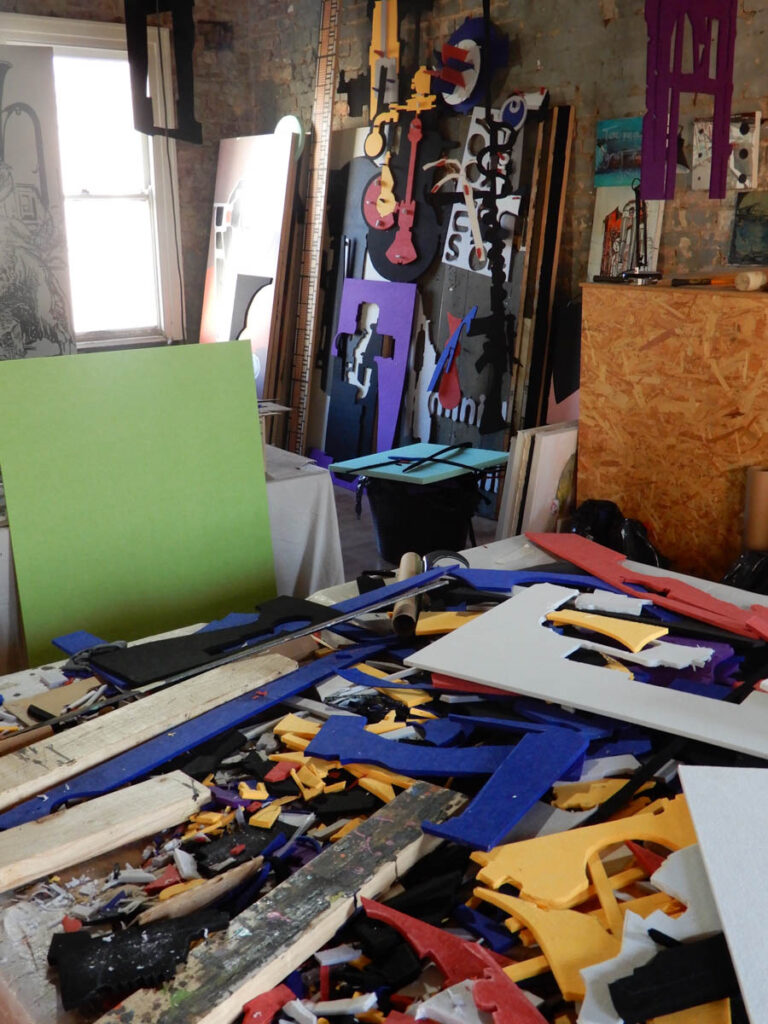 Over more than four decades, Victor has dedicated himself to the elevation of discarded parts and offcuts as primary material for making. He has literally “given voice” to their potent qualities that consist of both formal and conceptual potential. Through his performative work, the impassioned vocalisation foregrounds the human: the labour that has traditionally been a central component of industry and manufacture and the demolition of structures that still bear witness to the manual marks of maintenance and renovation. In somewhat of a surprise renaissance of recent making, Victor has opted for “sound cancelling” material in the form of felt acoustic panels in a range of bright, primary colours. The generation of and interest in offcuts remains, but colour seems to have triumphed over sound.  I look forward with much anticipation to where these new forms congregate and the silences they embrace. 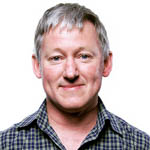 Gregory Pryor is an artist, writer and academic based in Perth, Western Australia. His practice is project centred and has often been informed by the stimulus of travel and seeing new places through foreign eyes. Pryor arrived in Western Australia in 2003 and since then there has been a strong emphasis on place and the role that botanical diversity and loss plays in shaping the landscape – particularly the ancient landscapes of the South West of Western Australia. He is currently exploring art conservation materials and processes as a model for studio work that addresses landscape loss and restoration and works as a lecturer in visual art at Edith Cowan University.

A bridge to Indonesia, my second home
The social lamellophone
Face-to-Face Across the World
On history making and cooperation: Tom Nicholson’s “I was born in Indonesia”
Subtle cuts: New word sculptures from Ally McKay
Vide Poche: A timeless dish for every day use
What in flame-ation!
Sky's the limit: The Cultural Textiles Rug Project