Deborah Kelly: Cutting with the past to create a new order 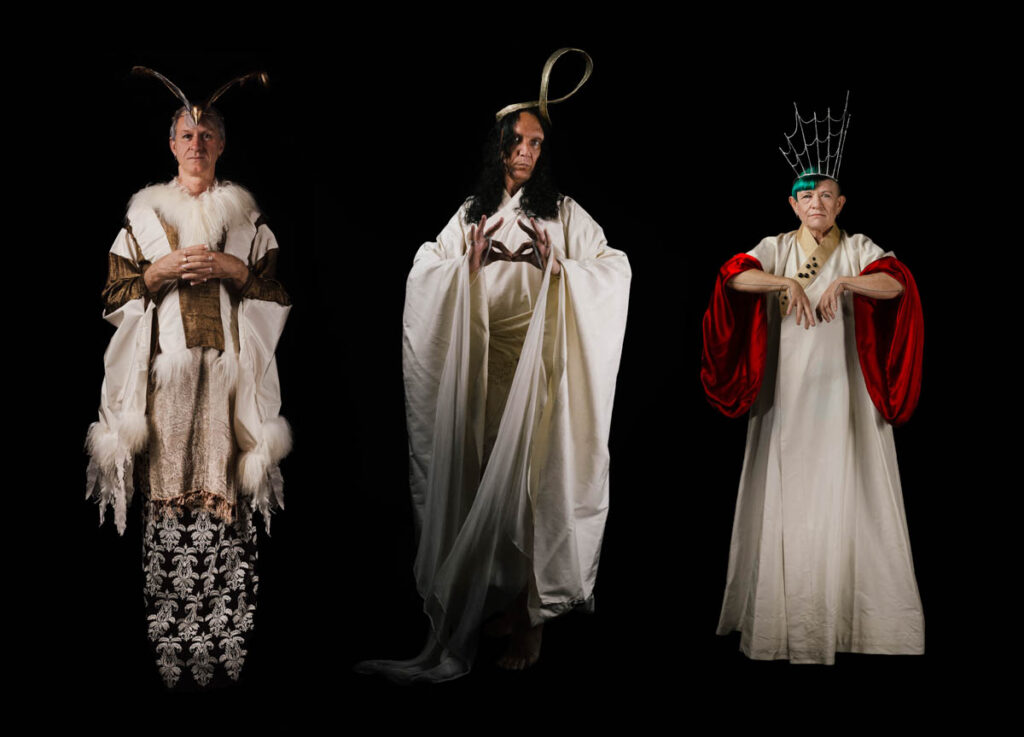 Deborah Kelly, Infinity, The Vulture and The Spider from Local Luminaries (2021).

Pamela See finds ancient resonances in the way Deborah Kelly cuts up the world to recompose a different future.

Staged at the Griffith University Art Museum (GUAM) between 24 February – 28 May 2022, the iteration of CREATION by Deborah Kelly which I witnessed was the third in a touring and evolving series of exhibitions. Coinciding with the Australian federal election, it captured the cultural precarity of the late Morrison era, by espousing a new way of living without climate-change denial, gender binaries and private ownership. These sentiments are propositioned through a series of artifacts, photographic and video artworks. Each element is residual of relational acts of collaborative craft, ritualistic performance and communal dance.

Most artworks began with cutting into reference books sourced from a repertoire which has been accumulating since the childhood of the artist. During the 1960s, both decoupage and counter-culture were ascendant. The latter included the mainstreaming of witchcraft in the United Kingdom. At the time, Kelly was schooled by Catholic nuns in Melbourne. Her hand cutting and pasting appear as simple yet affecting acts of defiance, reminiscent of both Dada during the 1910-20s and Second Wave Feminism during the 1970-80s.

From the 1910s, German Dadaist Hannah Hoch played an integral role in establishing the media of collage and photomontage. One of the few females contributing to the movement, she satirized the emergent mythology of the “New Woman”  in Germany by subverting the media which proliferated the phenomena, including fashion publications, popular magazines and illustrated journals. Her critique of gender and identity was highly influential at the time of her death in 1978. The American feminist iconoclast Barbara Kruger began investigating collage in 1977, prior to settling on her signature style in 1979. This features monochromatic photomontages, labelled with red and white Helvetica text. Her practice would engage large format printing, installed in an interventionist fashion as public art. 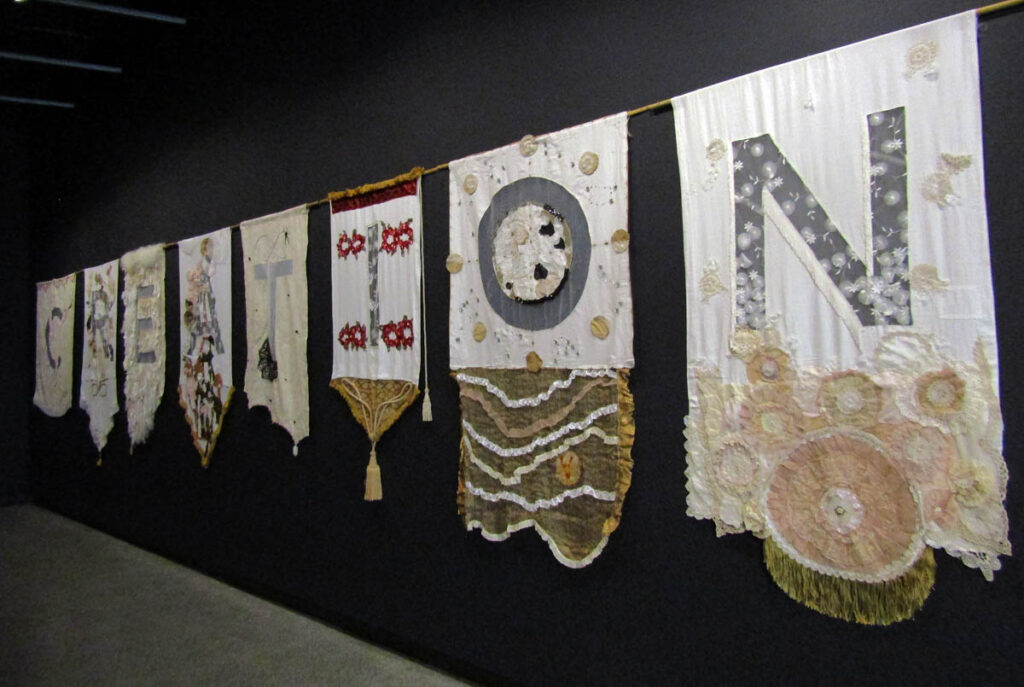 In the foyer of the building, leading to the GUAM entrance, formidable figures hovered in large format printed banners. The compositions were adapted from the cast of the digital animation For Creation (2021). Its imagery was collaboratively collaged from “the ruins of obsolete books” during workshops staged in Sydney, Darwin and Kandos. The participants collectively studied The Liturgy of the Saprophyte, by Wiradjuri artist and writer SJ Norman, which featured descriptively titled chapters in Latin. The names include “Orison Incendium [Prayer of Fire]”, “Orison Sapientia [Wisdom]”, “Orison Vulnerasti [Wounded]”, “Orison Voluptatem [Pleasure]”, and “Orison Tempestas [Weather]”.

A selection of these original compositions hung inside the gallery entrance, as part of the installation For Creation (Cast) (2019-21). The vibrant, visually complex, collages on handmade paper are distinct from their Dadaist and feminist counterparts in their intersectionality. For example, the image representing the latter, “Orison Tempestas”, incorporates symbols of environmental crisis across “deep” time, such as buildings being subsumed by the ground. The “Tempestas” figure has the legs of a human skirted by a bird’s tail. Of its two arms, one is gloved in black. Despite the genitalia being male, there is ambivalence about its gender, and, indeed, species. 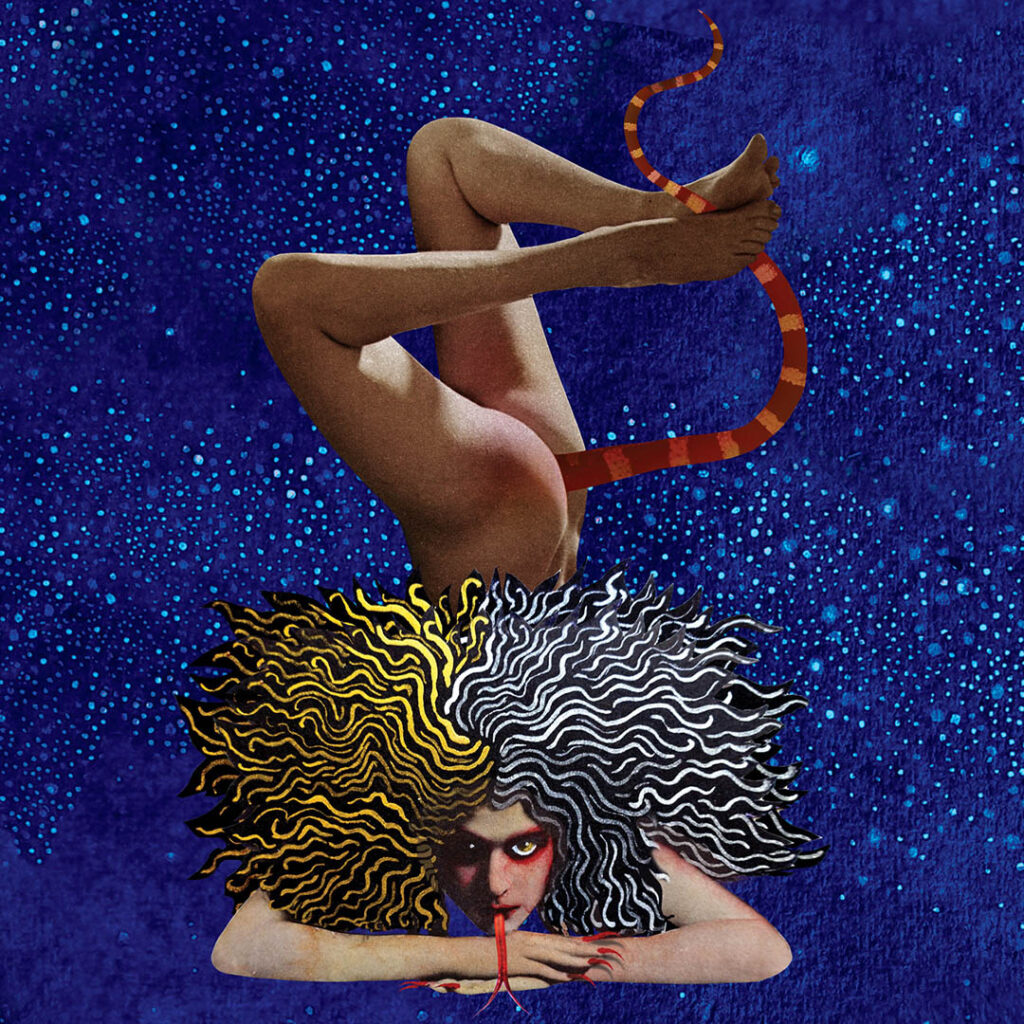 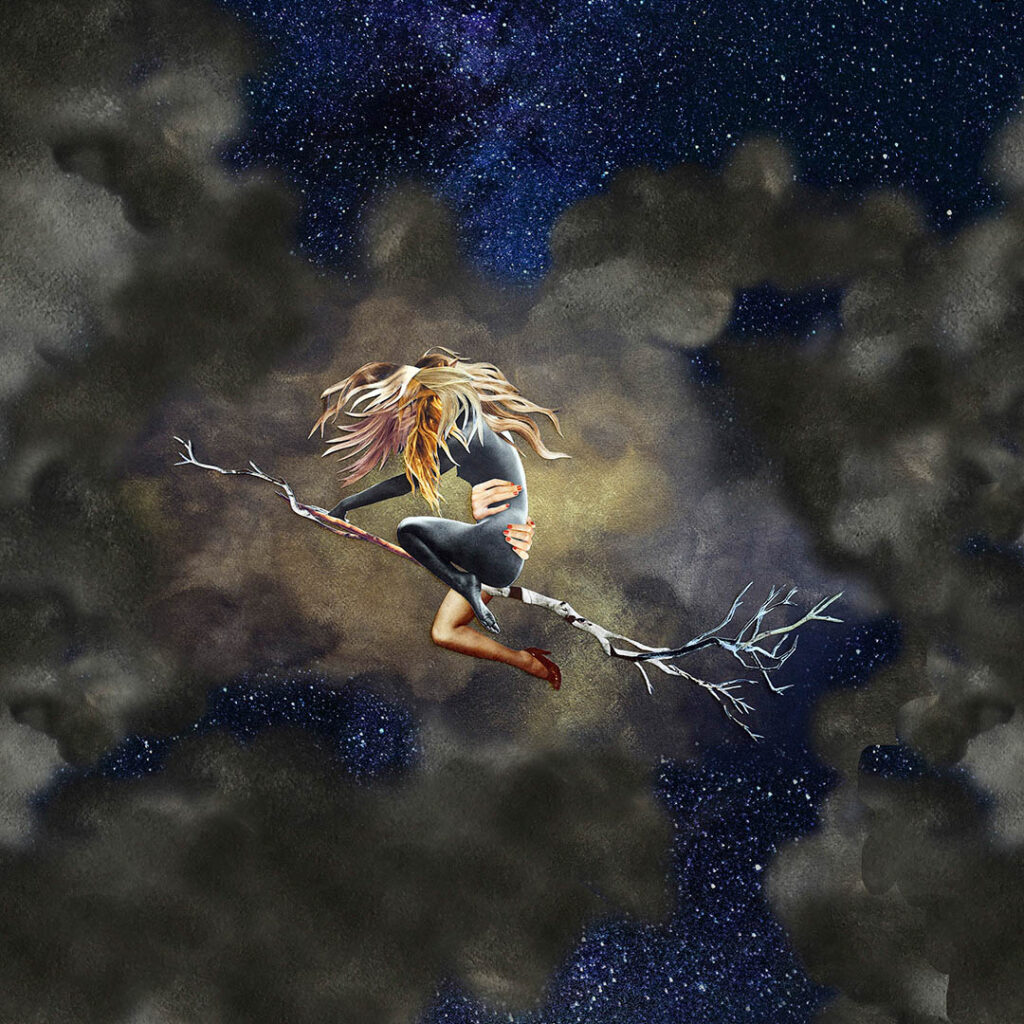 Kelly’s spiritual invocation of collage harks back to the contested origins of the craft of figurative cutting. Although evidence of cutting metal foils into religious symbols dates back to the late Shang-early Zhou Dynasties (1200 – 650BCE), the oldest surviving papercut originates from the end of the Western Han Dynasty (206 BCE – 9 CE). However, leather and felt cutouts of fauna from as early as the fifth century CE have been unearthed in present-day Russia. Their creators were nomadic warriors with tattooed skin who rode horses. The physiological features of their people included blue eyes and fair or red hair. The Scythians occupied territories spanning from Eastern Poland to North-West China. Their descendants include the tribes in Xinjiang, who made the aforementioned papercut during the sixth century CE.

The Scythians favoured totemic representations of animals and lined their tombs with cutout motifs depicting them. They worshipped their own pantheon of gods. Their shaman warded off evil spirits and sickness. Rituals, involving incantations and dance, were enhanced with both floral and faunal elements, both real and represented, both worn and brandished. Audiences may find semblance of these ancient traditions in what Kelly proclaims as a new “crowd-sourced” religion. The regalia, in which the Local Luminaries (2021) were photographed, include garments lined with feathers and fur fashioned from silk and wool respectively. The headdresses were renditioned to represent the “Holy Orders” outlined in the liturgy: Bacteria, Serpent, Vulture, Spider, Fungus and Rat. Additional, were personas symbolising Infinity and the Moon. Suspended fully assembled they exuded a powerful presence, yet absence alluring audiences to fill them.

The relational aspect extended beyond performances into the rituals of making, as Kelly’s collaging incorporates the collaborators reading to each other, an integral part of the process employed by Judy Chicago to craft The Dinner Party between 1974 and 1979. In that artwork, explicitly female ceramic tableware was placed on exquisitely embroidered table runners. Parity may be perceived in Kelly’s Procession Banners (2021), which were meticulously appliqued, embroidered, beaded, screen-printed and painted. Lace, pearls and silk, were amongst the materials incorporated. Similarly, hand-stitched banners were carried by First Wave Feminists during suffragette marches in the early 20th century. Despite the accessibility of the processes, it is both technical finesse and material finery which makes these products regal. 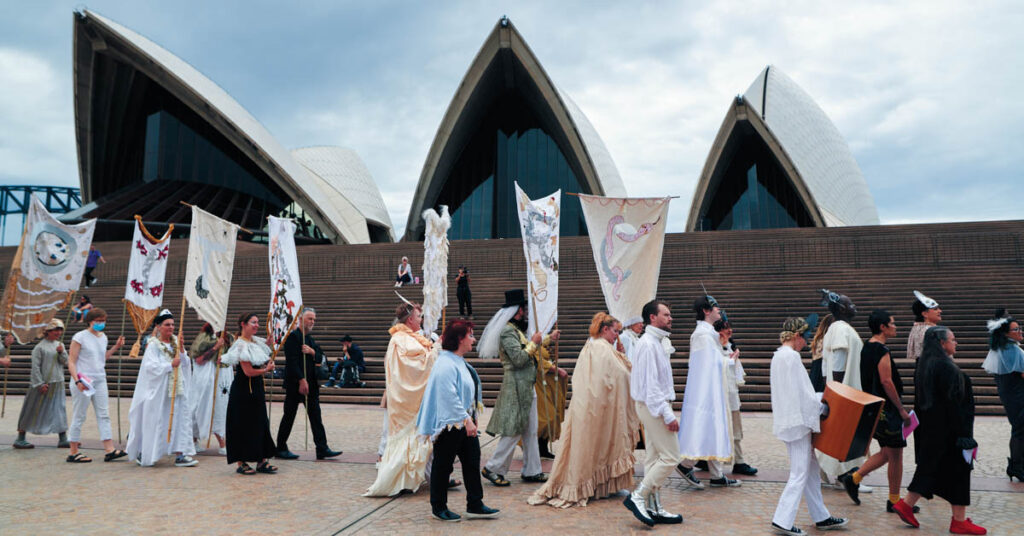 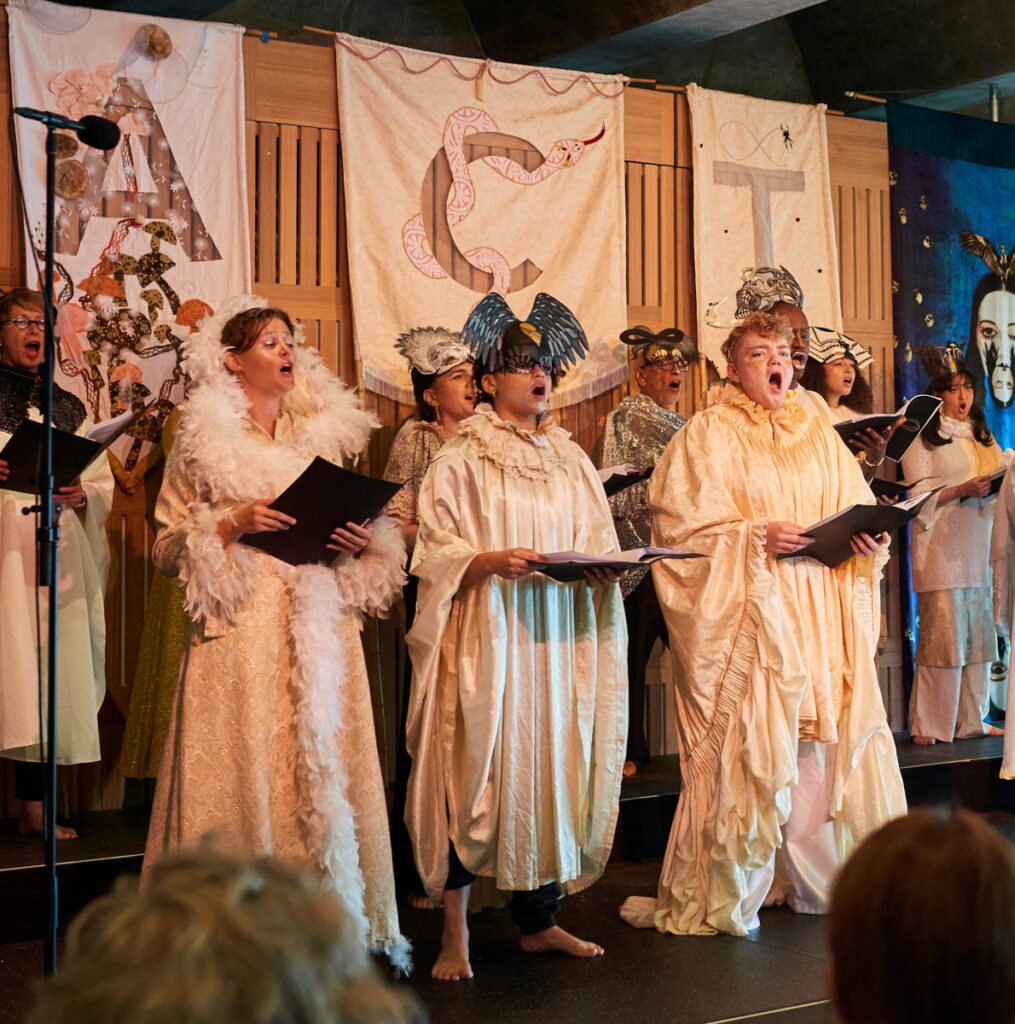 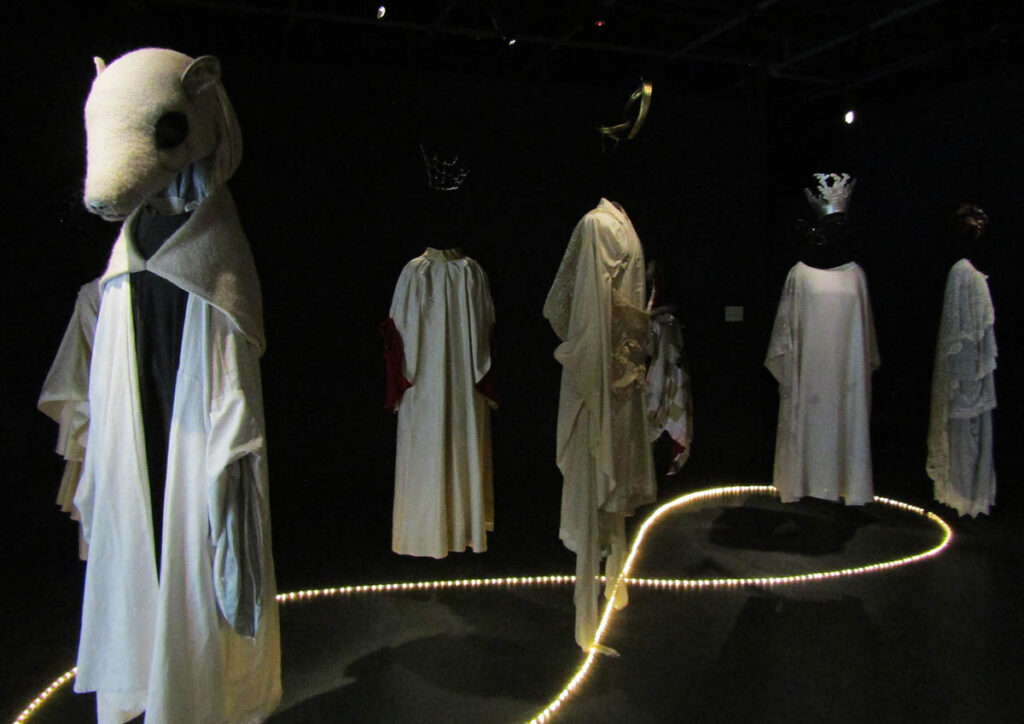 Whilst many of the compositions were conceived and realized through purely analogue methods, the exhibitions have an equal emphasis on digital artifacts from video documentation of dance to digitally animated sequences. Navigating the larger-than-life projections, which snaked around GUAM, was an immersive experience. Synesthesia resulted from the overlaps in sightlines and sounds, which served to accentuate a Dadaist aesthetic. German painter Hans Richter was amongst the pioneers of filmmaking during the 1920s, challenging conventions, such as the decade-old Kuleshov Effect, with nonsensical cutting between sequences of contrasting styles, from time-lapse photographs of plants blooming to the film negatives of actors performing gestures.

He began by photographing sequences of cutouts of simple geometric forms, changing their position and scale on a single picture plane. Another pioneer of German film during the 1920s, Lotte Reiniger, began photographing sequences of cutout figures, which were hinged in accordance with shadow puppetry tradition. Not unlike Richter’s shapes, Kelly’s cutouts are resized, in relation to one another, to convey depth. Similar to Reiniger’s characters, Kelly’s characters are segmented enabling parts to rotate to imply movement. Despite an absence of film grain, there is a distinctly analogue texture to For Creation (2021), a sequence animated from a collaborative collage by Melody Pei Li. Her care in preserving the tactility of the original cutouts counters the sterility which can accompany the digitalization of material books. The animation of these complex collages also accentuates their accessibility. The pieces of paper and the narratives they convey appear unfixed. This creates a unique space for the imaginations of each viewer to complete.

Lastly, epitomizing the post-digital convergence of old and new technologies is a series of five tapestries translated from collaborative collages titled Speculation I – II (2020), Song 1-2 (2020), and The Holy Orders (2020). Cutting has played an integral role in the evolution of computers from the introduction of movable books to Europe, in the form of thirteenth-century Spanish volvelles, to data punch cards which were in use up until the 1970s. Punch cards were invented during the nineteenth century, to program jacquard weaving looms. Kelly worked with tapestry makers in North Carolina, who employed contemporary digital jacquard weaving prior to finishing the textiles by hand.

Through proposing a new religion, CREATION by Kelly provides an insight into the Australian political landscape at the cusp of the Morrison-Albanese governments, pertaining to environmental conservation, post-gender reform and public ownership. Her critique of these contemporary issues draws on conceptual material and physical materials with which audiences are likely to be familiar. She also embraces a plethora of processes which may now be considered domestic or desktop. However, these are technologies that were revered at the time of their conception which, in the case of decoupage, may date back to antiquity.

Kelly’s engagement of the traditions revives the reverence of the crafts practiced, the salience of the symbols depicted, and the relevance of the sentiments they convey. This also serves to suggest that the solution to present-day problems may be found in the distant past. Although most compositions began with the simple gesture of cutting paper, the completion of many required undergoing complex digital processes. The effectiveness of the digital artifacts reflects the retention, if not enhancement, of the tactile nature of the cutouts. It is this prevalence of the human hand, which makes this exhibition an anachronic triumph. 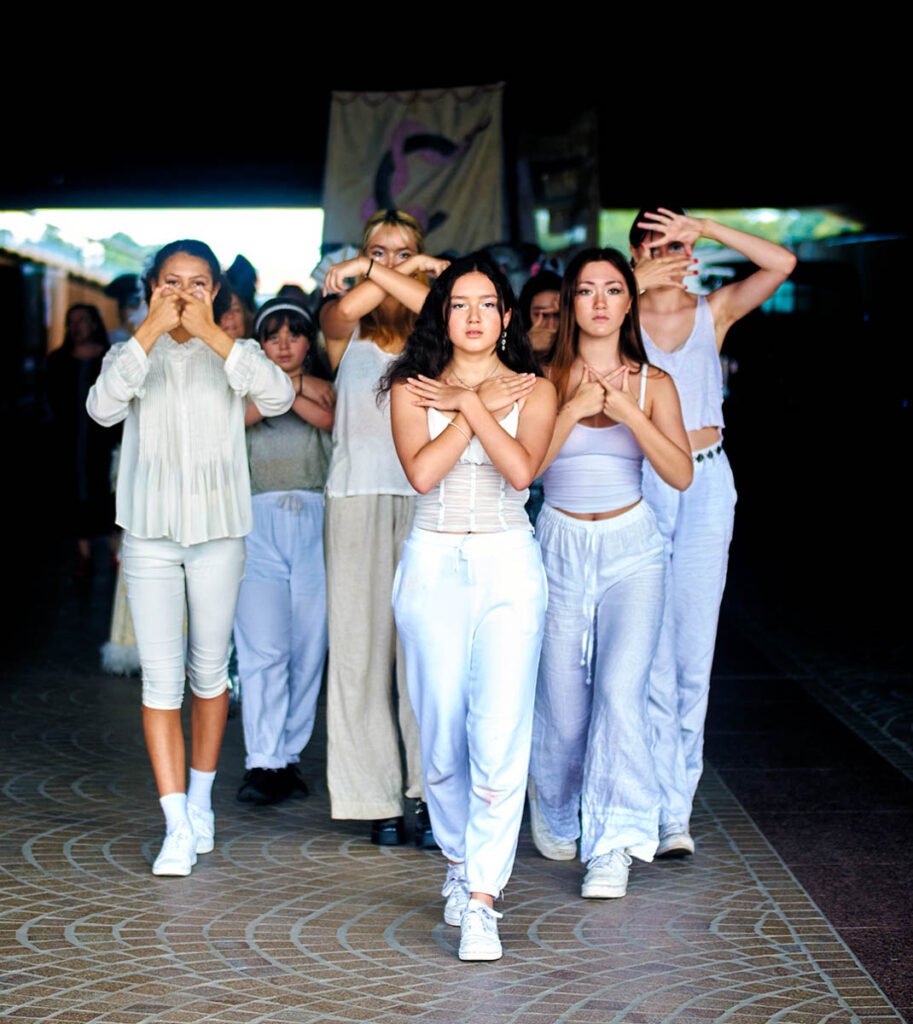 The next iteration in this evolving series of exhibitions, events and performances, opened at The Lock-Up in Newcastle on 19 August 2022. It culminates with a gala concert of the religion’s songs, as part of the New Annual Festival.

Hunter, C. (2019). Threads of Life: A History of the World Through the Eye of a Needle. Hodder & Stoughton.

Sergeant, A. (2019, October 24). Before Walt Disney, There Was Lotte Reiniger – The Story of the World’s First Animated Feature. The Conversation. 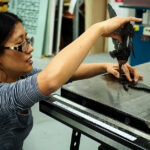 Pamela See ✿ A renaissance woman
As a regular contributor to Garland, Pamela See is a revered Perennial. Visit her page to learn more about her and the other stories she has written.

Augmented reality: From the art of intervention to the craft of public engagemen...
A copper glass engraving wheel: The quest for the perfect tool
Closing the circuit: Thinker-Maker residency at Substation 33
place of not-knowing: on Arrernte Country
Habitat: Terracotta homes for hard-working bees
Ropework: Soft garniture for life
Making the cut: The effects of the introduction of Computer Numerical Control (C...
Wood carving in Nepal: How Buddha emerges every day