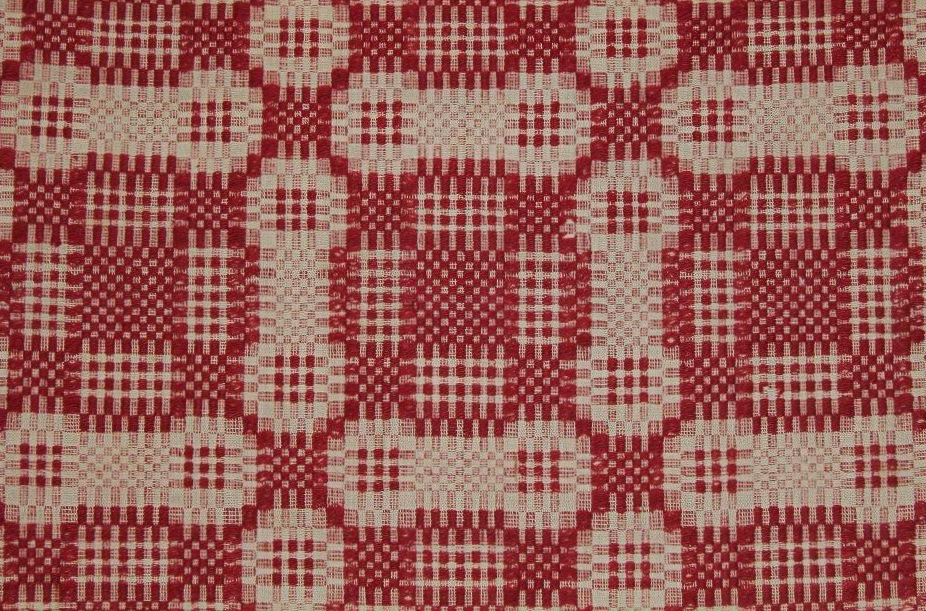 Sadye Tune Wilson and Doris Finch Kennedy’s “Of Coverlets” (1983) identifies this pattern as the “Catalpa Flower.” 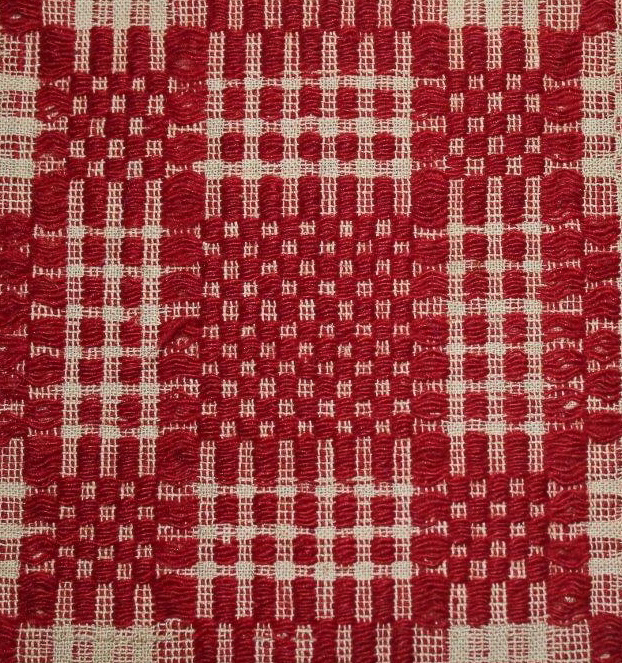 Coverlet weavers in at least three counties of east Tennessee weaved this pattern. 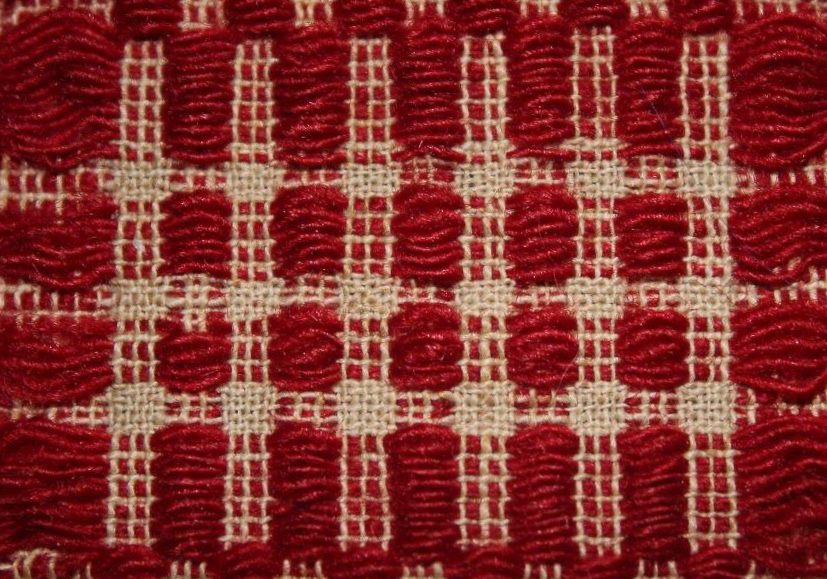 Presha most likely made this vivid dye with madder root.

Jeffrey Keith considers the bedcover made by his great-great-grandmother as a memoir and describes how its threads bind him to the southern mountains she called home.

Beauty, genius, expertise, place, and identity are woven into my great-great-grandmother’s overshot coverlet. If you read about coverlets in the literature on craft in the United States, you’ll learn that these bedcovers create a kind of optical illusion. Made mostly by women on floor looms, overshot coverlets incorporate a warp, often made of undyed cotton or wool yarn, with a matching tabby weft as well as a pattern weft that is dyed in a sharply contrasting color. These threads are woven in a precise manner to create block motifs comprised of repeating geometric bursts of color that, when viewed in the context of the full weave, soften into rounded and gentle shapes. It is a beautiful thing to behold this mesmerizing illusion, and such is the case with the coverlet made by my great-great-grandmother Margaret Priscilla “Presha” Wooten (née Lacewell). 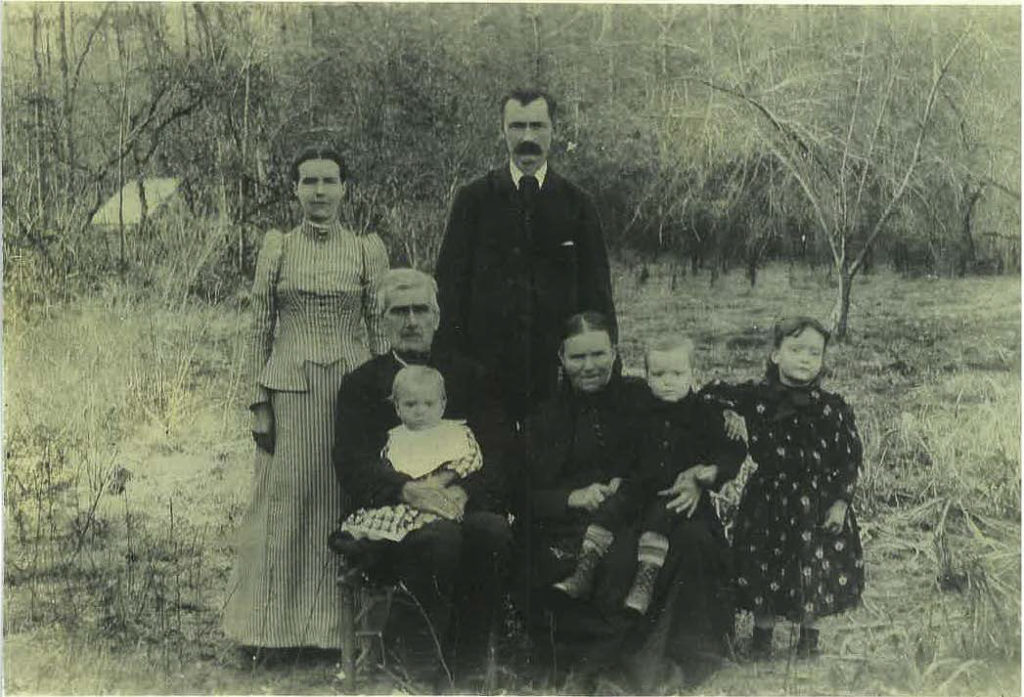 The woman standing in this photograph is Presha Wooten, the author’s great-great-grandmother. Presha and her family are standing in front of their Bradley County homeplace.

My family knows scant little about Presha. My mother had to consult the family Bible to accurately provide me with her full name. In the only photograph of Presha that I have ever seen, one taken just before her death in the waning years of the nineteenth century, she is standing, and she is wearing a nice but worn-out dress, what people of her time and place might have called her “Sunday best” or her “going-to-meeting clothes.” Her parents, seated in front of her, are staring into the camera with a severe intensity. They were sharecroppers. Presha’s husband, standing next to her, was a farmer as well as a mailman. Presha’s son Walter, who is perched on his sharecropping grandmother’s lap, went on to become an inspector-in-charge for the United States Postal Service; on at least one occasion, he hand-delivered mail to President Franklin Delano Roosevelt, and he also played a role in firing William Faulkner from a position at the Oxford, Mississippi, post office. (The family lore was that Walter said, in a rather exasperated tone, “Little Billy Faulkner thinks he can write.”) Presha’s household symbolizes to me the upward social mobility in my family that made possible, eventually, my present reality as a college professor in North Carolina. I don’t know if Presha or her husband were fully literate, but I know that the oldest written record of my family was produced by Walter after he retired from the postal service in 1949.

Presha died when Walter was a young boy, so his memoir contains only two vague stories about his mother. One was that she set Walter down in a field so that he could watch his father hoe crops, and that Walter’s father ended up using his hoe to kill a snake that Walter found fascinating but that was obviously a danger. The other story involved Presha yelling at Walter when he was trying to ride on a horse that belonged to a neighbor. Considered together, these stories tell me less about Presha than they tell me about Walter. My point is that Presha’s coverlet tells me quite a lot more about her than does the one extant account of her existence.

The coverlet shows that Presha carried within her a genius for beautiful design. Its enduring quality tells me—well over a century later—that she took pride in doing good work and that she possessed the expertise to do so. I connect this expertise and her use of it to the advancement she and her husband clearly sought and ultimately achieved. Presha’s coverlet conveys her profound aspirations for what she hoped might be a better future.

The photograph of Presha was taken near her parents’ cabin in the Appalachian Mountains of east Tennessee. The southern mountains of the U.S. were home to a strong preindustrial domestic weaving tradition, and though overshot coverlets were made across North America, the tradition persisted longest in Appalachia. This tradition was a matter of necessity. Most people in the southern mountains didn’t have electricity until the mid-twentieth century. Tightly woven coverlets don’t breathe well, so they aren’t common today as bedcovers. Before central heating, however, they were essential for surviving winter nights in the rural mountain South. By contrast, tightly woven coverlets prove oppressively hot in climate-controlled homes. Taking her craftsmanship as a kind of testimony, I can assume Presha cared for the comfort of her family, and I can imagine a little bit about the home where she and her family lived.

Scholarship on regionality in the U.S. explores the connections between strikingly distinct places, but the cultural discourse surrounding U.S. regionality often emphasizes differences over connections. Appalachia is a place so awash in mythology that to be “an Appalachian” conveys a certain narrative about a person that has more to do with well-known stories than with a precise geography, and the boundaries regarding who is and isn’t Appalachian are tacitly and actively maintained by individuals with an array of motivations for doing so. My home state of Kentucky is split apart by such regional tensions—east and west Kentucky are considered radically different and sometimes even opposed to one another despite their shared plight as rural places in a country largely preoccupied with urbanization. I was raised in the western part of the state, in a small town surrounded by a landscape of tobacco farms and an elaborate limestone cave system that sprawled beneath rolling hills and lazy rivers. The mountains were to the east. According to governmental definitions of U.S. regions, Appalachia officially starts one county to the east of where my parents now have the coverlet on display in their home. As the crow flies, the coverlet is hanging on a wall no more than twenty miles, or thirty-two kilometers, from Appalachia’s edge. I have struggled with my own sense of identity as a result of localized debates over the meaning of place, the birthright identities that people assign to those born in different parts of Kentucky, my recently established work life at a college in the mountains of North Carolina, and the cultural politics of the U.S. as a whole. This is a complicated and tangled topic, but in a very tangible way, Presha’s coverlet helps me understand how I fit into the contested narrative of who is and isn’t Appalachian and what that term actually means.

There is a difference between reading about coverlets and reading the coverlets themselves. The former involves categorization and proves technically exacting, while the latter requires imagination and is, therefore, speculative but also expansive. Still, I believe I know my great-great-grandmother better on account of reading her overshot coverlet, and I cherish it as though it is her memoir—her way of sharing with others her aesthetic preferences, the brilliance of her creativity, her commitment to excellent craftsmanship, her connection to a specific tradition, and a sense of who she was. In turn, her coverlet is also a text about who I am and how, eventually, I acquired the privilege and ability to write essays such as this one.

This object makes possible an impossible relationship—one that allows me to get to know my great-great-grandmother through the walls of time. Presha’s overshot coverlet makes clear to me that she had a mind powerful enough to make a beautiful and functional object from everyday materials, so it is entirely reasonable that Presha possessed the imaginative capacity to think that an unknown descendant might tell unknown readers on the other side of the earth a little something about her and her work, but if such a wild notion ever crossed Presha’s mind as she operated her floor loom then it probably seemed, at best, unlikely. I’m thankful, however, to think about my unknown ancestor and how her overshot coverlet offers a glimpse of her character. I can see her throwing the shuttle back and forth, alternately pressing down the treadles with her feet, and pulling the beater to create a tight weave between the warp and weft, and I’m happy to know her. 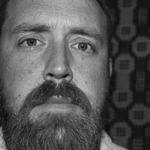 Jeffrey A. Keith plays the mandolin and writes about rural life and U.S. foreign relations. A native of Bowling Green, Kentucky, he is a professor of global studies at Warren Wilson College in Swannanoa, North Carolina. He is currently putting together a digital oral history project about media-making in the Appalachian coalfields, and writing a novel about the loss of traditional places, class anxiety, sinkholes, and the mystical limits of rational thought.

“If you want to know about us, examine our buildings”: A Journey through Uzbekis...
Entangled threads: Woven knowledge systems
From Brunswick to Ahmedabad: The Hand/Eye Project
Linda Brescia: Holding Up The Sky
Yayasan Tafean Pah - the next weaving generation in West Timor
Creative currencies in the cupboard: Cecile Williams in Denmark
Sharing silent conversations through craft with Samorn Sanixay
How an island makes its makers: The artisans of Gabriola