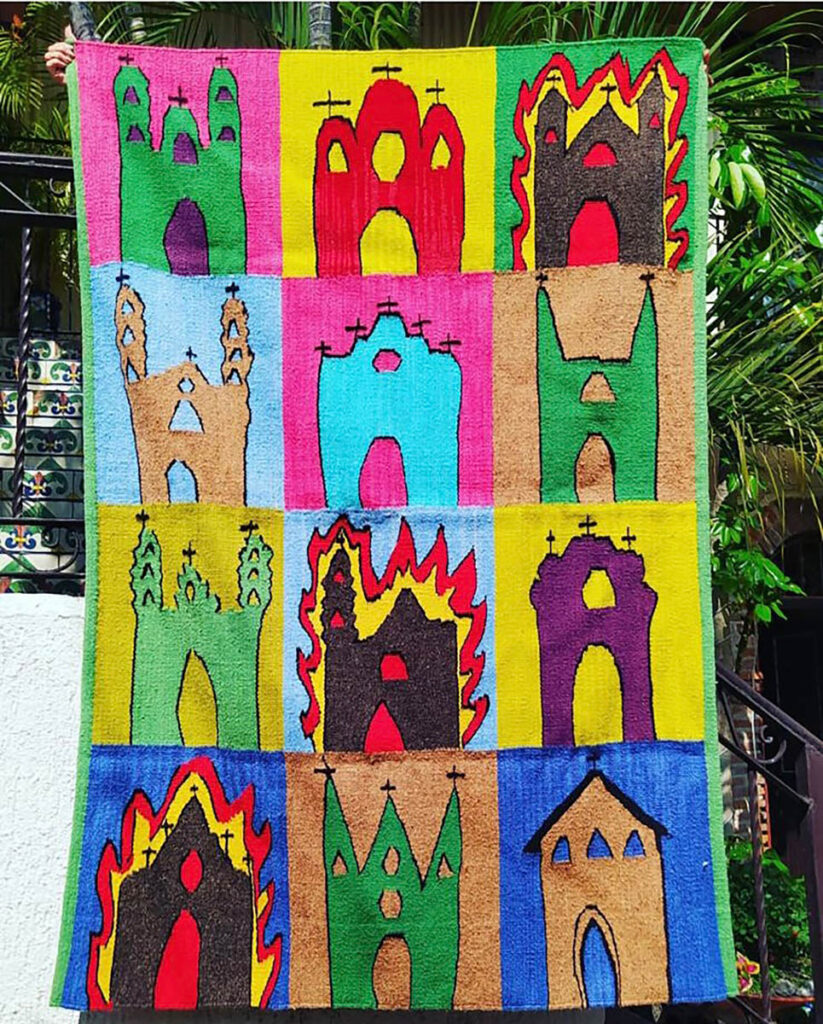 Raquel Bessudo is drawn to the tapestry by Esteban Leñero, “The air that helps the spark”, that honours the magnificent churches of Michoacán.

The backstory, the craftwork, and the words of the artist are all equally important for the final piece.

Esteban Leñero has curated and promoted Mexican crafts for years, focusing mainly on Mexico’s states of Michoacán, Jalisco, and western parts of the country. Co-founder of Galería Hecho a Mano in Chamula, Jalisco, he believes that the artistic creations of craftspeople in Mexico “are closely linked to their worldview and religious symbols.” His intimate knowledge of craft workshops and cultural diversities in the region of the country has inspired a process of visual research that has led to projects created hand-in-hand with the craftspersons: “It’s crucial that they understand I choose to work with them because of their talent and what their hands can create. Their skill allows me to see my piece take shape, but it’s important to remember that they are always fully involved as exhibitors.”

For his collaborations with craftspersons, Leñero begins by acknowledging their specific talents and aesthetics in their collections.

The story behind the textile 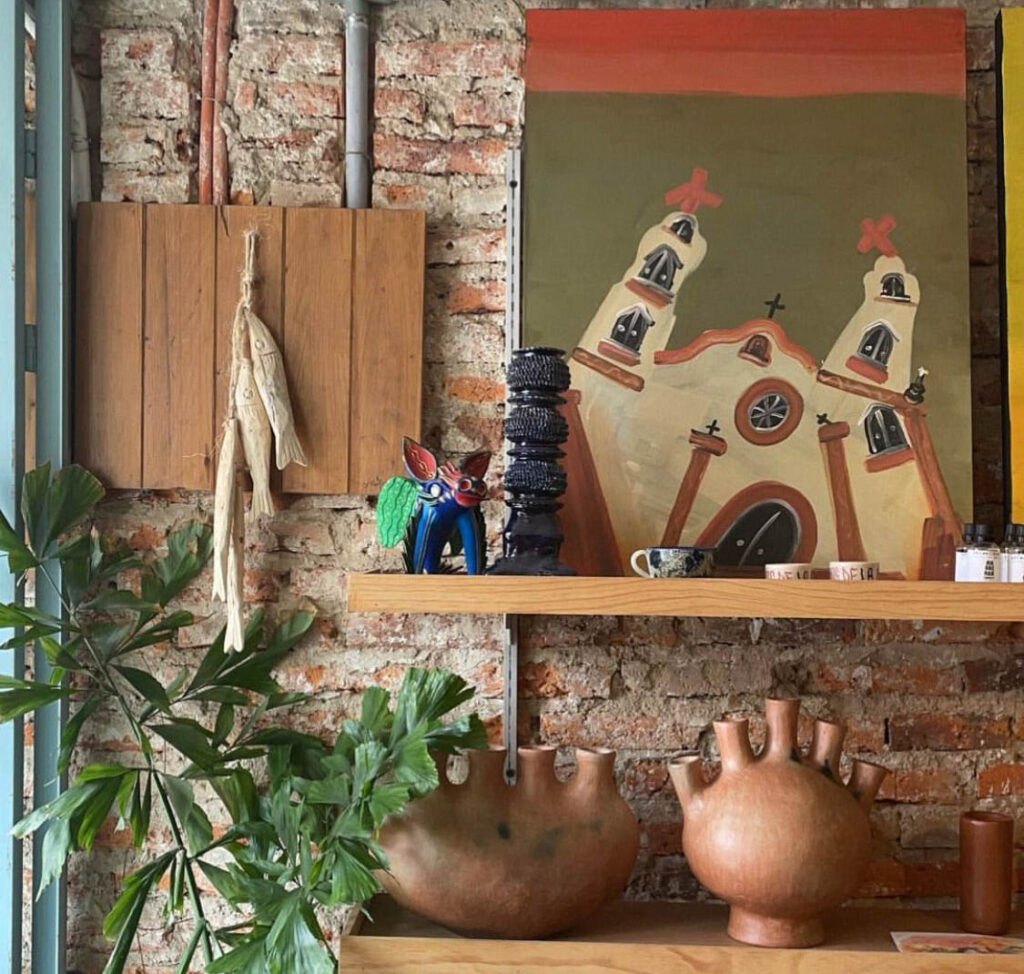 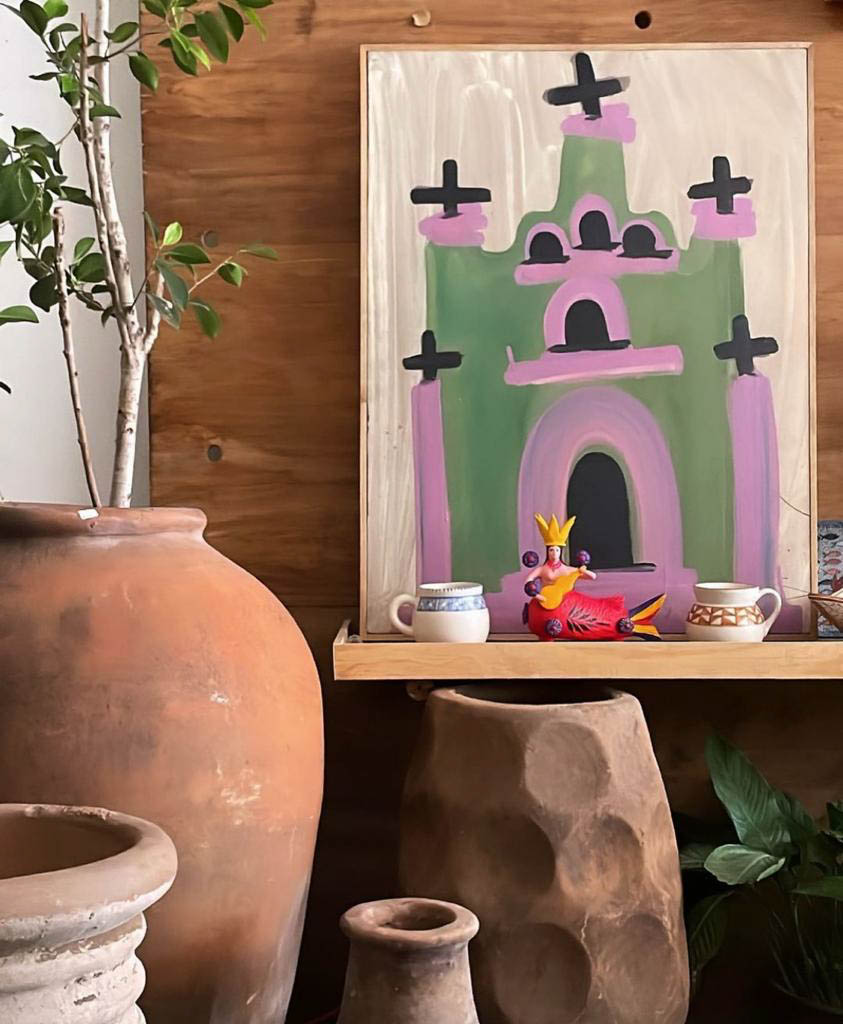 Leñero was born in the city of Zamora in the state of Michoacán, a state that is home to many colonial churches and monasteries, and the surrounding culture has played an important part in his life.

He describes his relationship with churches as a visual reference and an aesthetical inspiration, “It has always been more about the historical aspects and the aesthetics than the religious values.” He understands its relevance within Mexico’s colonial and mestizo culture. He even remembers buying and selling cards with religious imagery as a child, “I chose the most colourful ones, the most exotic virgins, the most magnificent attires [. . .] More than the Church as an institution, I’m more interested in its history and monuments as national heritage; its architecture as well as the cultural and physical references.”

For Leñero, along with many Mexicans, churches, chapels, monasteries, and open-air chapels become landmarks and centres for social and cultural celebrations and gatherings. Before designing the tapestry, he produced various paintings and drawings inspired by churches and the combination of colours and views of towns around the country. This visual investigation led to the final design for the pedal-woven wall hanging.

The inspiration behind the concept 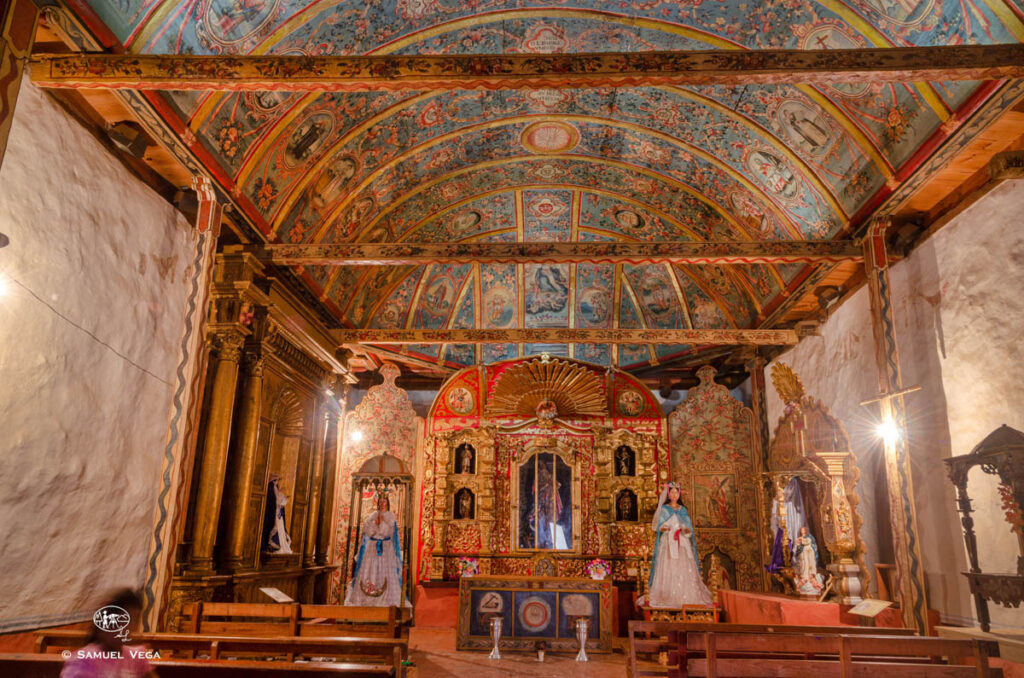 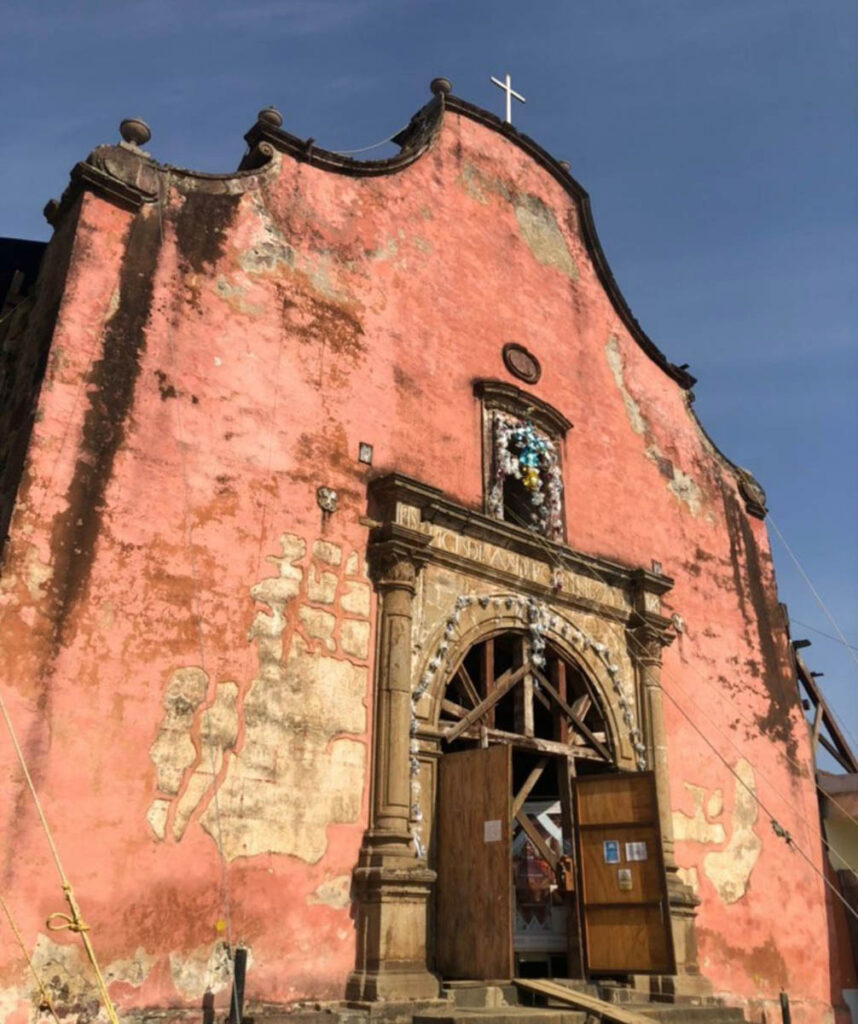 One particular set of religious buildings that had always impressed Leñero was the Iglesia de Santiago Apóstol. Located in Nurio (Michoacán), this church was built by indigenous craftspeople in the colonial era. It was famed as a cathedral of New Spain’s art. Its wooden ceiling used the tejamanil technique, with thin, rectangular-shaped wooden strips tiled (like shingles) on the ceiling and then hand-painted with religious imagery.

During the night of 7 March 2021, either a short circuit or a firework sparked a fire. Strong winds fanned a raging inferno that utterly consumed the ceiling, altarpieces, oil paintings, and invaluable works of religious art. Only the church’s façade and three of its interior walls survived the blaze.

The burnt roof was made of pinewood and hand-painted with representations of the Holy Trinity, angels, and saints as well as biblical passages—traditional features of churches in the Purépecha region.

Some oil paintings and altarpieces were rescued and can still be seen at La Capilla del hospital (Hospital Chapel), which houses “La Huatapera”—a painted ceiling made with the same techniques and dedicated to the Immaculate Conception and known as Michoacan’s Sistine Chapel.

Church constructions in the region combine the knowledge of both the Spaniards and Purépecha. Indigenous labour was widely needed for these buildings, and the vital contribution of local Purépecha artisans is still recognised today. As inhabitants of a densely forested part of the territory, the Purépecha people were renowned for their woodworking skills. They built houses, fences, and walls surrounding temples during the pre-Hispanic era.

Michoacán is widely known for its many works of colonial-era architecture, and its religious buildings from this period are often considered cultural heritage sites. Before the conflagration, visitors could look up at the ceiling of the Iglesia de Santiago Apóstol and feast their eyes on the Purépecha’s unique woodworking artistry and technique.

The tragic loss of this building inspired Leñero not only to bear witness to this cultural calamity that affected the Purépecha, Michoacán, and all of Mexico, but also to depict the sadness of the knowledge that it will never exist again. He is also keen to raise awareness about negligence in preserving historical heritage sites.

“El aire que ayuda a la chispa” (The air that helps the spark) is a tapestry born of the artist’s close relationship with textile master weaver Pedro Romo, a collaborative pairing for a work of art that gives equal weighting to both aspects of the project: the concept and the craftwork. 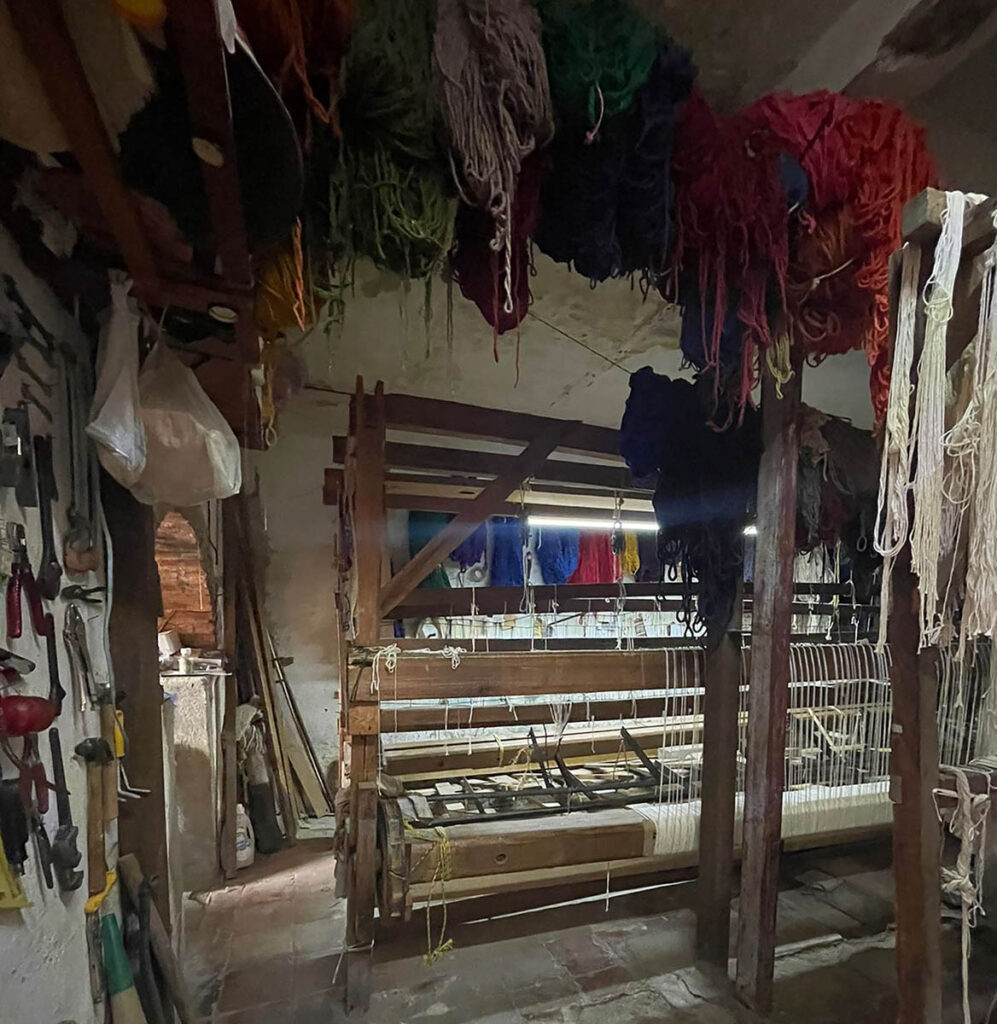 A mutual friend introduced Leñero to Romo’s work, and through the artist’s gallery, they have also been commissioned to produce decorative works.

Taller Pedro Romo de la Rosa represents the fourth generation of a family of pedal-weavers.  Romo’s tapestries are held in private collections and displayed in galleries. He also works on commissions by the artist and interventions on pieces from local and international artists. For example, he worked with Pierre Clark in the 1970s on a textile creation that was exhibited at the MoMA.

This particular connection goes deeper than the merely decorative level, by linking conceptual art and skilled handcraft in an intrinsic bond that gives a unique voice to the piece.

One day as I was walking in the town of San Miguel Allende, I happened to enter the Field Day exhibition curated by Mario Ballesteros at his pop-up exhibition space (Galería Dos Casas). There I met Esteban Leñero and had the privilege to hear his story while standing next to his work.

I like to think that the artist’s piece sparks interaction and collaboration, and rescues part of the story of what has been lost. 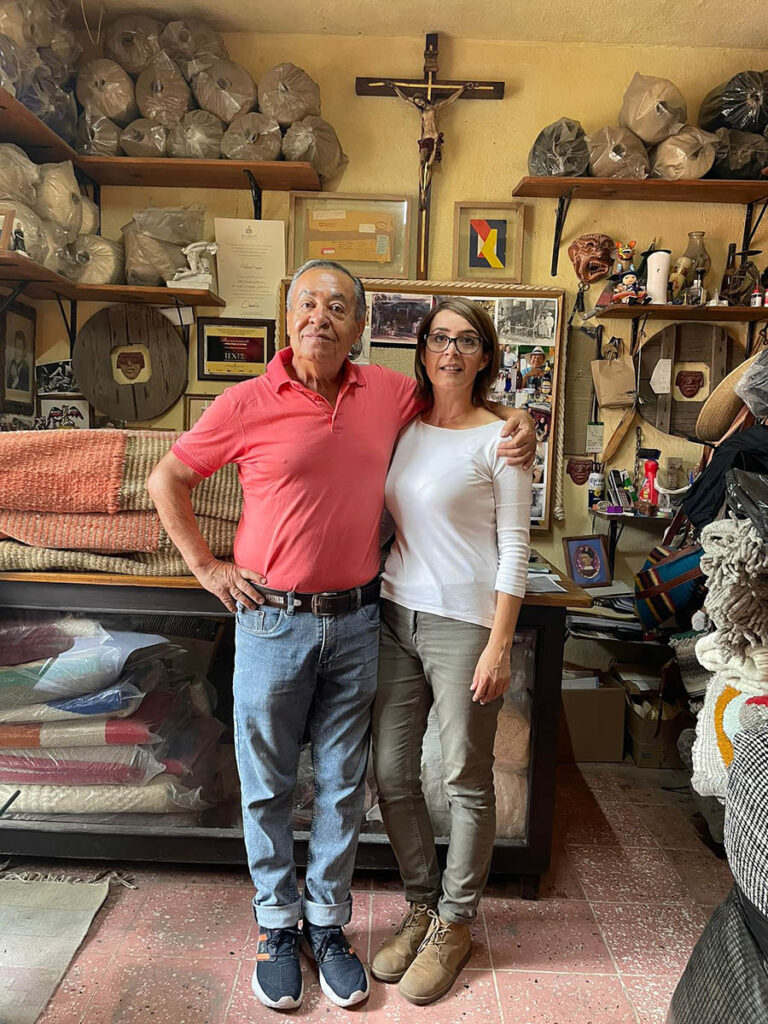 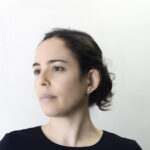 Raquel Bessudo is a contemporary jewellery artist based in Mexico City. She was part of the selection for Shmuck 2020, participated in a group exhibition on the occasion of Paris Parcours Bijux 2020 and by Association Alliages as part of Painful Hope 2021 and Until death do us part 2022 exhibitions. Her work has been exhibited in Mexico, Argentina, the USA, Australia, and Europe. Some of which include II Contemporary Jewellery Latin-American Biennale 2018, “Neighbours,” where she received a special mention from the jury. “Huellas” Museum Juan del Carral Colombia “La Frontera” Encounters Along The Border MAD, NY, USA, and Museum Franz Mayer Mexico. “The US-Mexico border” Place Imagination and Possibility” CAFAM September 2017 L.A., USA. VOVEO promise objects for everyday use, Radiant Pavilion, Melbourne city library, Australia August 2017. Publications of her work include Metalsmith Magazine, Vol 40 No.3, Artist in flux by Rachel Reichert, JAMS, publish by SNAG, The jewel Book, Stichting Kunstboek, Belgium. Follow @raquelbessudojewelryartist

Raquel Bessudo ✿ An eloquent witness for the craft of the Mexican people
Raquel Bessudo is a leading contemporary jeweller who is dedicated to finding stories from her Mexico that demonstrates the creativity and resilience of the people. Raquel Bessudo is a jewellery artist based in Mexico City, holding a BA(Hons) Fine Arts degree from CSM College of Arts and Design London UK, 2000. And a postgraduate diploma from UPC, Barcelona. She was part of the selection for Shmuck 2020, participated in a group exhibition on the occasion of Paris Prcous Bijux 2020 during 2021, Association Alliage as part of Painful Hope exhibition,  SNAG, Voltage in NYC, Shape of Nature Shanghai China Cluster crafts in London 2021-2022 and more recently her work was selected for Until death do us part travelling exhibition by […]

In search of the elusive Baluchari in Bengal
Second Home
Biculturalism at hand: The Australian-Malay quilt
FRACTURE - show on textiles at the Devi Art Foundation
Academic and weaver join head and hand in Bandung
Linda Brescia: Holding Up The Sky
Maker mythologies: Classical origin stories for the crafts
Other Possible Worlds: Threading together Thai communities