Biculturalism at hand: The Australian-Malay quilt

During a recent trip back to Malaysia, I had a conversation with a Tibetan Buddhist nun, where I explained to her my cultural heritage. She looked at me with a confused expression on her face and she said “You don’t look Malay” I asked her what I look like and she replied, “You look like an Australian person”.

From culture to culture, I am an Australian in Malaysia and a Malaysian in Australia. I am never seen as belonging to the culture I am within at that moment. Throughout my childhood, I endured many moments of cultural misconception, not being of one nor of the other. As a bi-cultural child, I came to be the passive recipient of competing values.

Inspiration for my work comes from my Australian/ Malaysian heritage and the craft mediums and the stylings/ clash of these two cultures. Collecting imagery and materials of these cultures occupies my creative eye, just as much as working with them. I have a self-taught freestyle approach to my quilting and embroidery techniques. I create oversized appliquéd wall pieces using vintage/ Asian silks collected from Malaysia and antique, estate and bequeathed sources in Australia. The quilted elements are merged with a raw raffia embroidery technique that I have developed and are embellished with miniature Peranakan glass beads. Embroidering with raffia is hard; it is a strenuous material to work with. I have a tendency to use materials in a way in which they are not intended to be used. Gold embellishments are dominantly present in my work and refer to my Malay ancestors.

My work is a materialisation of the in-between space a bi-cultural identity occupies. In this space, there are no rules to be broken and cultural boundaries are able to be traversed.

My recent project Hypersensitive/ Hipersensitif (my first solo exhibition) was shown at Gaffa gallery during Sydney Craft Week 2018. This show also travelled to Malaysia, where it was exhibited at China House gallery, Penang. To have my work exhibited in both Australia and Malaysia has been my foremost important quest as a bi-cultural artist.

To best understand my position, let me provide a brief insight into the background of my parents. Both my mother and father have a rebellious nature. My father was from a small kampung (village) in Parit, Perak Malaysia. He lived in a blue house on stilts along the riverside, which looked like a gingerbread house. It was colourfully painted in wedding cake pastels with intricately cut wooden eaves lining the rooftops. Elaborate latticework archways frame the majestic decorative tiled stairways and pretty potted flowers line the pathway leading to an inviting entry of the home. 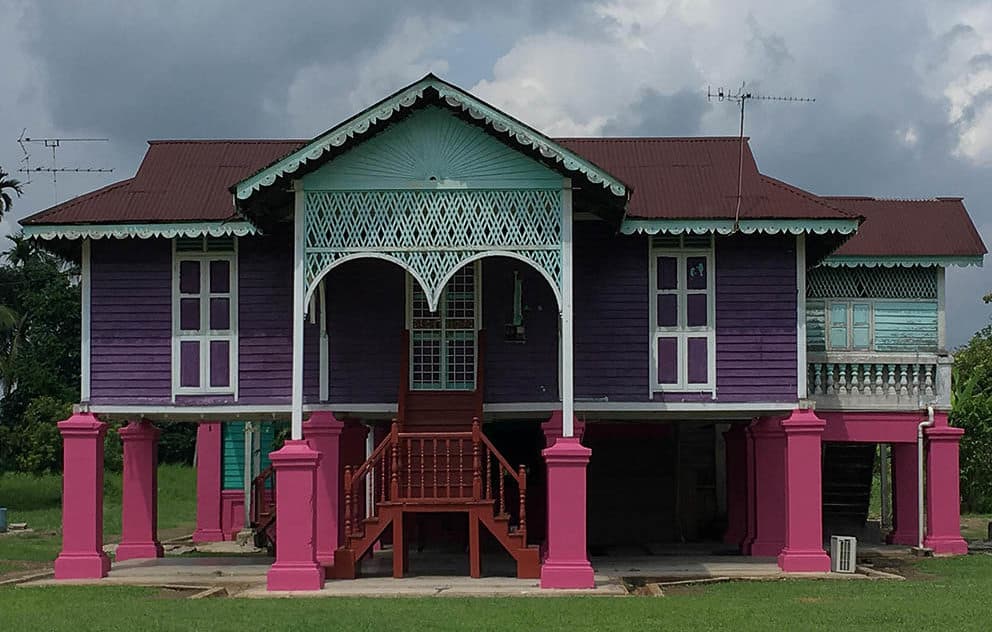 I didn’t get to know my father very well: he passed away when I was ten years old. But the stories I do remember of his adolescence were of a mischievous nature. He told me once he took his mother’s diamond ring, wanting to impress his peers. He went swimming in the river and lost it. His mother was very angry with him. The ring was so valuable she hired divers to search the river but had no luck in finding the precious diamond.

He had a funny big toe. The toenail was all wonky. This was from playing a dangerous game of dare with a gang of his teenage friends, smashing his toe with an axe.

My father was the first and only son of a conservative Malay Muslim family. He was surrounded by the strict confines of Islam. His family were fairly well to do and as a young man he left Malaysia and came to Australia to study. At this time to study in Australia was for the select few who were awarded a scholarship or the sons of affluent families. My father was of the latter.
My mother grew up in Bexley, Sydney. Her family were the classic old school Aussie larrikins. Her father was a plumber come taxi driver who carried a thick wooden batten tucked at the side of his car seat for protection and her mother was a delicate woman, who worked in a cake shop. She had a sweet tooth and always sympathy for the underdog, being one herself.

My mother’s youth had an inherent dark side. She rebelled against the confines of the misogynous era. And was often harshly reprimanded for ruthless acts that enraged her father.
One day my Nanna received an anonymous letter in the mailbox, informing her that her daughter was the subject of scandalous gossip. The letter vigorously advised her to kerb her daughter’s unruly behaviours.

My father met my mother in Sydney, at an organised ball for Malay university students and Australian nurses. They were set up by a friend. After meeting my mother, my father made no contact with his family for eight years. His parents were so worried that my Opah (Malay grandmother) had a Bomoh (Malay shaman) perform a spiritual search through sorcery to make contact with my father.

During these years my father strayed from the confines of Islam. He rejected the teachings and adopted the Australian lifestyle, although as an Islamic man it is his duty to pass on the religious methodology to his children.

We lived in Campbelltown in the early 1970s and we were one of the only interracial families in the community. One of the most memorable moments of my childhood is from primary school when I was asked “What religion are you?” for scripture classes. I went home and asked my father and his reply was “You are a Muslim”. In Australia at that time and to me, being Muslim meant we had fun playing on the oval during scripture time.

My father’s passing brought a disconnection from his Malay family. He was the only boy and his passing rendered little to no further communication from them. It was the vastly different cultural behaviours like this that I did not understand.

The only remnants of my father were in the cultural objects scattered around my home. An example of my father’s mysterious cultural heritage was a small colourful mat folded and stored at the bottom of the linen press. I’d unfold it sometimes. It had a rich soft pile, with a glossy sheen and pretty tassels. I could see it had never been used. 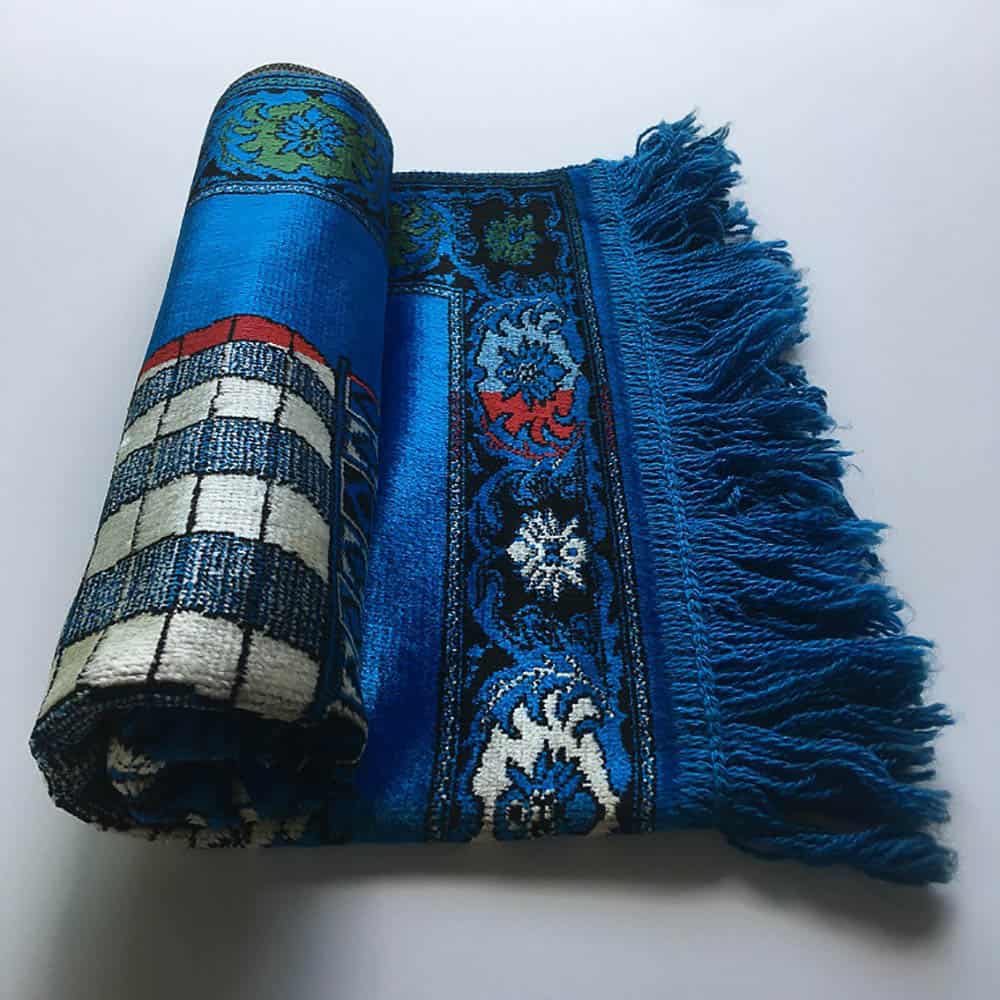 During the 1970s in Australia, attitudes to intercultural unions were parochial, resulting in a social imbalance. Tensions arise when thoughts and values from dramatically different cultural groups clash, and the values of traditional practice are viewed from one cultural perspective only.

Growing up in conflicting cultural environments, bi-cultural children develop a natural ability to cross cultural boundaries. Through a naïve resilience, they develop the unique skill of switching “in-between” the opposing cultural groups. It’s the crossing of these boundaries and “switch” in the cultural frame that is fundamental to the hybridised artistic style developed in my textile work.

My artwork is a personal pursuit to find contentment and a need to appease the internal conflict experienced through the instability of biculturalism. Securing a solid sense of belonging has not been possible for me. But I have come to understand the value in the unique position of the “in-between”. The ability to switch enables me to traverse cultural boundaries that people of one singular culture are unable to cross. Seeking refuge through my art making is something I have done since childhood.

In this space, I did not need to follow traditional textile techniques. As an adult, I have always worked in this way because I do not fit into the cultural groups who own these traditions. So, I instinctually create my own pathways of creativity.

In-between has become the place where my imagination is freed. I take what I want from either of my inherent cultures, creating a hybridised sense of self that is not bound by the limitations of any one culture. Works are embedded with the traditional quilting techniques of my Australian mother and merged with Islamic methodologies and cultural materials of my Malay father.

My work aims to widen parochial views of an Australian/ Islamic identity, by presenting to the viewer an alternative pathway that is cohesive and unified. 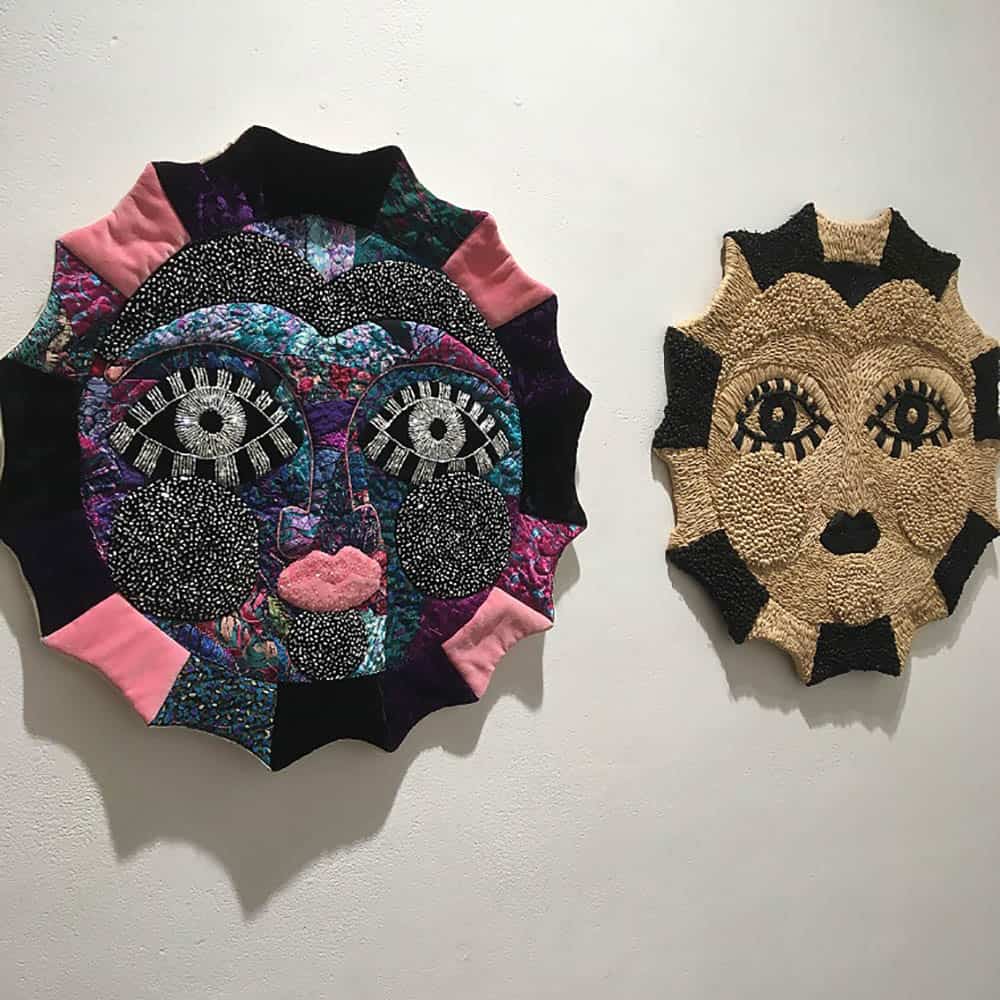 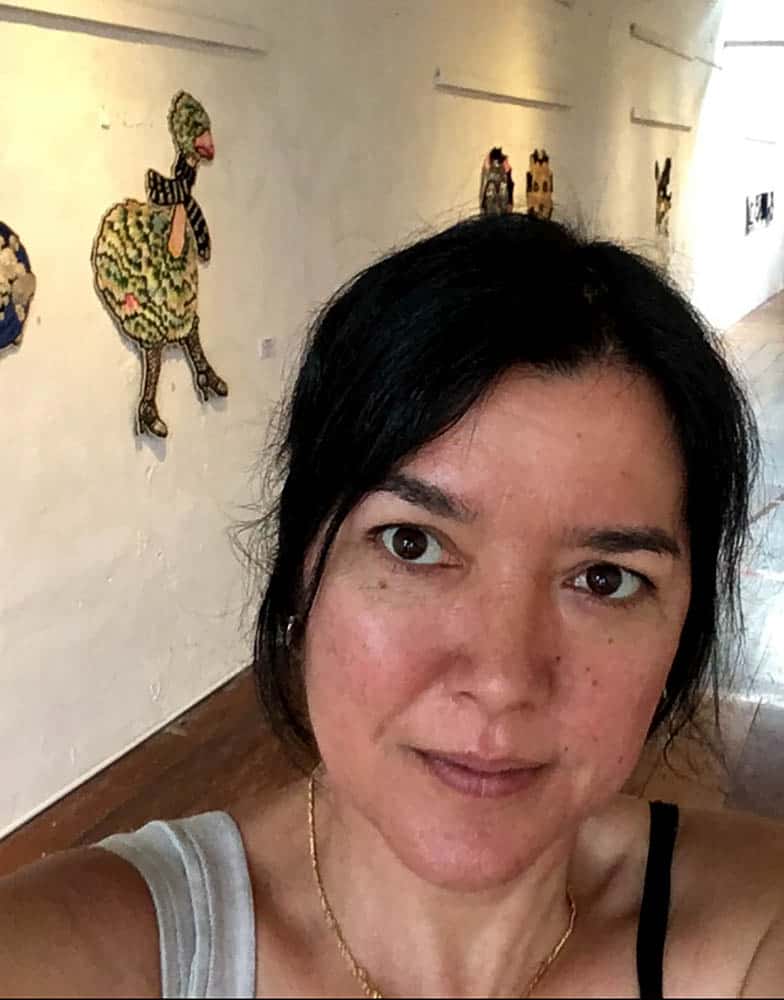 A switch is played out in the cultural frame of the materials and techniques in my work. The two suns portray the Double Consciousness of a bi-cultural identity and are a tongue in cheek play on the “light”, a symbolic reference to Allah/ the Divine embedded within traditional Malay motif designs.

This practice is how I have developed creative opportunities in my artistic world. I feel more comfortable to create in my own way. This quality led me to a new textile opportunity in 2016. After several unsuccessful attempts to show my work, I decided the best response to the frustration and isolation I felt towards what seemed like a closed and flooded art world was to create a new textile initiative open to the public of NSW and provide myself with an opportunity to network with other textile artists by offering an opportunity to exhibit their work in Sydney.

Seed Stitch Contemporary Textile Awards (SSCTA) was born in Warringah Creative Space in 2016, after which the Seed Stitch Collective (SSC) formed. Together we have shown our work in Sydney galleries and built a reputable identity as a group of innovative and diverse contemporary textile artists. Through this voice, the SSC partnered with the Australian Design Centre to present SSCTA 2018. The exhibition was enormously successful. The platform SSCTA provides is a very exciting development for textiles in Sydney and NSW and together we will continue to provide this opportunity for textile artists to connect with the broader art community. 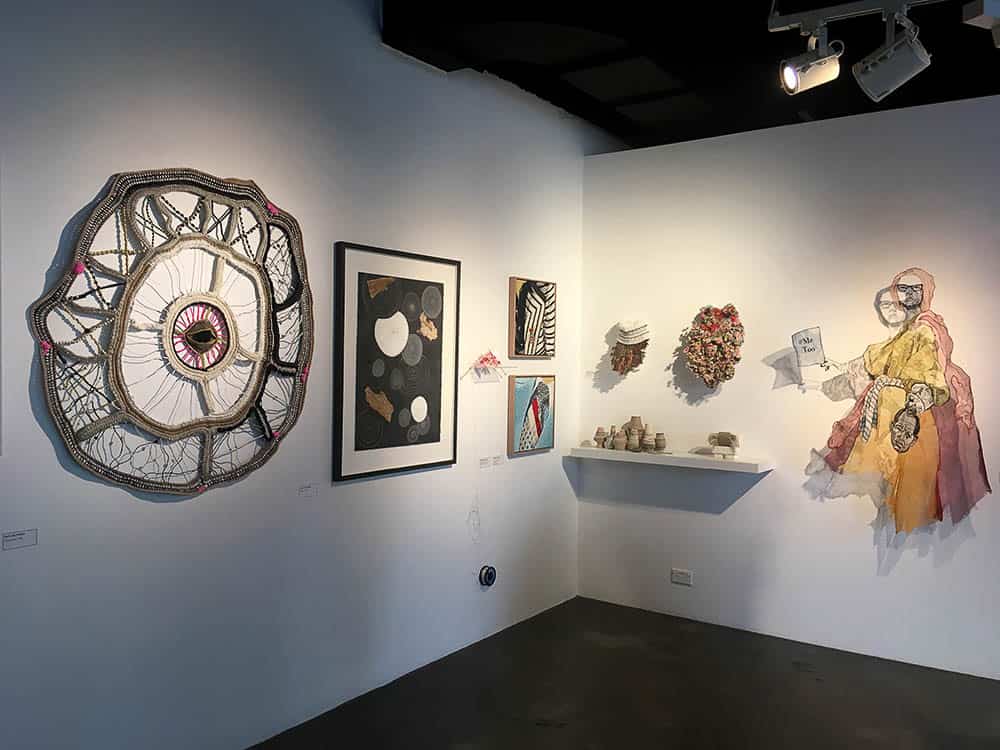 The SSC is currently working on an installation project, Dopamine. The work will be on show at Gaffa Gallery during Sydney Craft Week 2019. The exhibition will present an interactive experience for the viewer, aimed to induce feelings of euphoria, bliss, motivation from the audience. For me and my artwork, I continue in the pursuit of artistic contentment. This year, I am working on a body of work that ideally will traverse between the Australian and Islamic communities here in Australia. My work aims to inform the viewer of an Australian/ Islamic identity, by depicting the contemporary culture and a future of biculturalism in Australia.

As a multicultural country, the patterns of intercultural unions will inevitably create a wider variety of people with unique inborn fusions of identity and religious methodology. This is something we all have to look forward to here in Australia. 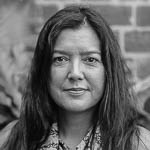 I am a bi-cultural Textile artist from Sydney. To survive as an artist, I also teach Visual Arts and Design and Technology at secondary colleges on the Northern Beaches. For updates from the SSC and SSCTA follow us on Instagram @seed.stitch.collective and for my work @sorayaartis. Amongst my existing art projects, I am seeking to connect with other bi-cultural artists Australia wide who are interested in working together towards a future group show here in Sydney. I’d like to invite artists whose work address themes of Biculturalism to contact me at sorayaartis@gmail.com or on Instagram @sorayaartis and let the conversation begin.

Zhuizi: An ordinary dog's tale
Academic and weaver join head and hand in Bandung
Yayasan Tafean Pah - the next weaving generation in West Timor
Sky's the limit: The Cultural Textiles Rug Project
Omar Musa blends words and the wood carving of Borneo to explore beauty, rage an...
Ulaṭbānsi / Zigzagging: Filming the spirit of weaving
The kediyun: A slow turn for fast fashion
Ndomo: Beauty from mud in Mali