12 Camels: Take a seat by chance 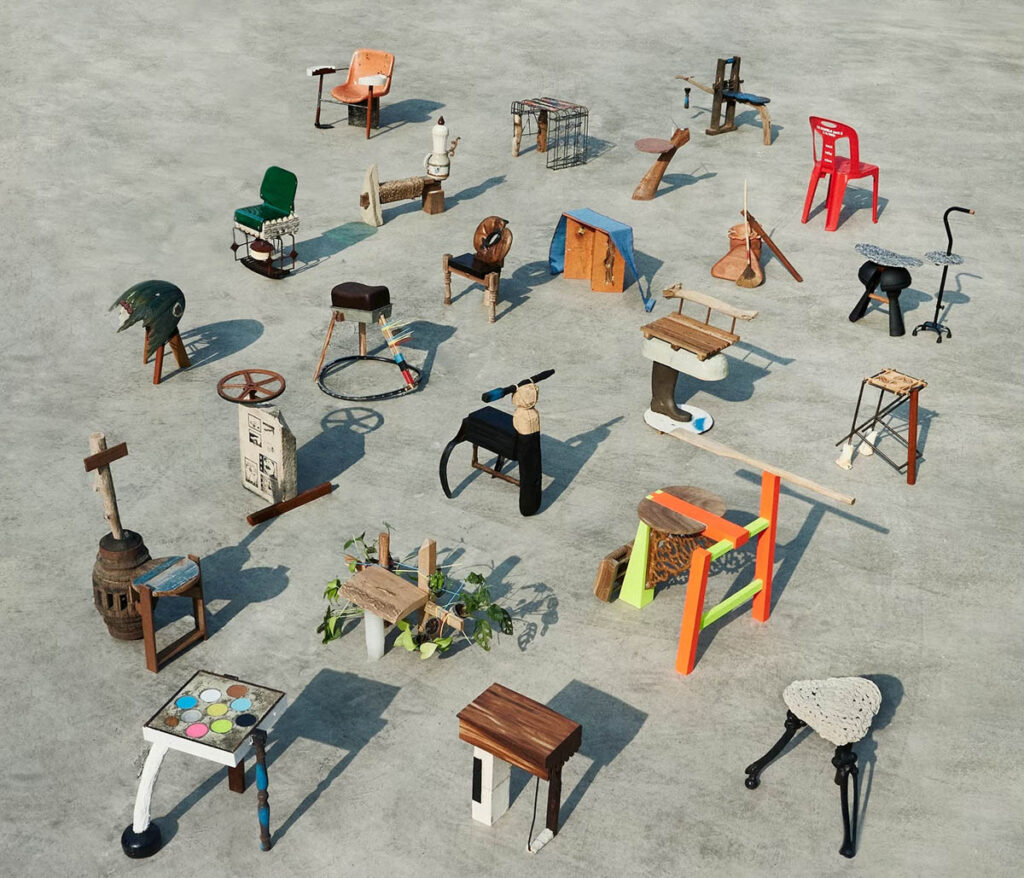 Nanu Youttananukorn and Lidia Vajda describe an exhibition in where Thai designers and makers were randomly assigned three legs to make a unique stool.

“A camel is a horse designed by a committee.”

Issigonis, the British-Greek designer of Mini Cooper, compares the anatomically perfect horse to a camel: a weirdly shaped animal with humps on its back, curved neck, and disproportionately long legs. The animal seems the result of too many conflicting opinions in any design process. A simple act of creating something non-existing (or at least better, different than market competitors) when commissioned, is influenced by briefs, trends, sales goals, target audience preferences, safety measures, cost ratio, efficiency, social, technological, economic, historical, ethical, legal, environmental and cultural factors.

12 Camels was initiated by Grains & Grams, a Thailand-based collective of independent designers, artists and makers who share a common passion for wood. They invited artists, woodworkers, jewellery makers, and designers. They drew inspiration from the notion that in design, as in life, we are often subject to various external factors, things you have no control over. Originally as part of Bangkok Design Week 2022, 12 Camels expanded for a second edition called 24 Camels at Kalm Village, an art, crafts and cultural centre in Chiang Mai. 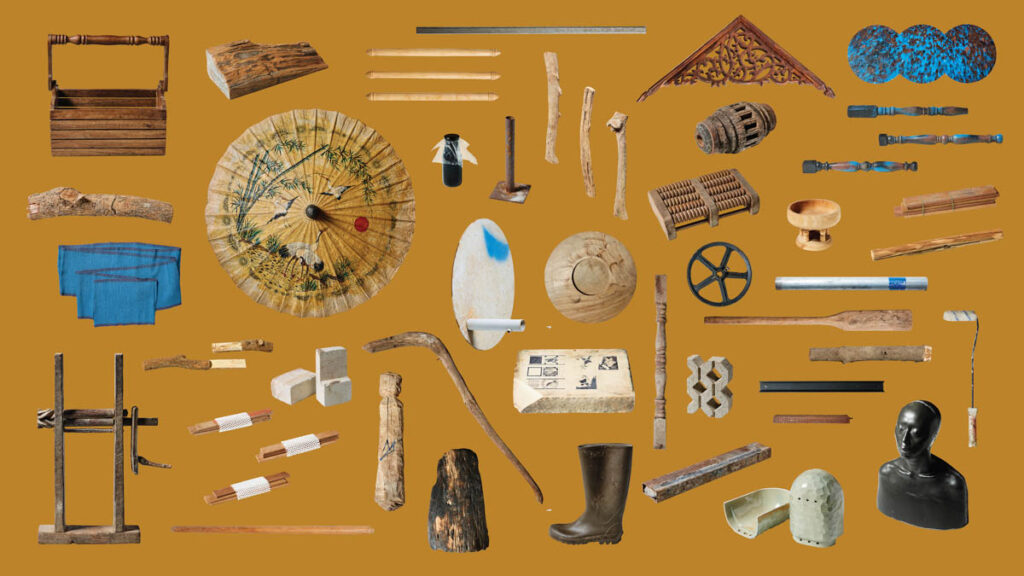 Using either found, reclaimed or fabricated objects, the participants agreed to create a three-legged stool—possibly the most elementary piece of furniture there is. The gathered stool parts are randomly assigned by the computer randomizer and distributed among them to minimise human interference, thus creating a condition beyond control. The elements had no limitation of material, shape or size and eventually included rope, bones, empty egg cartons, broom, plastic cups, wheel and popsicle sticks, among many other seemingly useless objects. Some makers were lucky, receiving parts with rather obvious functionalities, but others had it worse. With roughly one month to come up with the stool, makers experienced the fairness, better yet, the unfairness of life. Where is the boundary of what we wish for? The answer may well be the boundary of our imagination, the line that marks the known from the unknown.

Oftentimes designers are in a fortunate situation where they have a luxury of choice. They have the ability to select, combine and render a combination of materials to produce the desired outcome. There is a consensus sense of beauty or the lack of it when certain materials come together. All of which operate in the domain of knowledge. But this is true only in usual circumstances. The 12 Camels situation created a condition where the liberty of choice is removed. The real luxury is luck and the only perk is that there are 12 teams (later on expanded to 24) going through their own different versions of the unknown together. But the unknown had led the teams to places never before conceived, pushed them to make unimaginable objects, and the result was beyond their expectations. Maybe this is the real fortune.

A stool can be seen merely as a supporting structure that releases its user from the burden of standing up—if one considers it only as furniture. But a stool seen or perceived as a medium can be a tool for metaphor. There is a parallel between constructing a stool out of elements that were inconceivable in combination and bringing together a group of people who were otherwise strangers. The differences in the qualities of materials are very much alike when we consider the pool of backgrounds from a group of people: diversity in age, upbringing, status, class, pre-conceptions etc. But to successfully construct a stool requires all different entities of materials to cooperate. Each piece has to do its part in upholding a structure, for the very least that stool has the ability to hold its own weight. The same could be said about a group of people from all walks of life constructing a professional network, dare to say friendships. 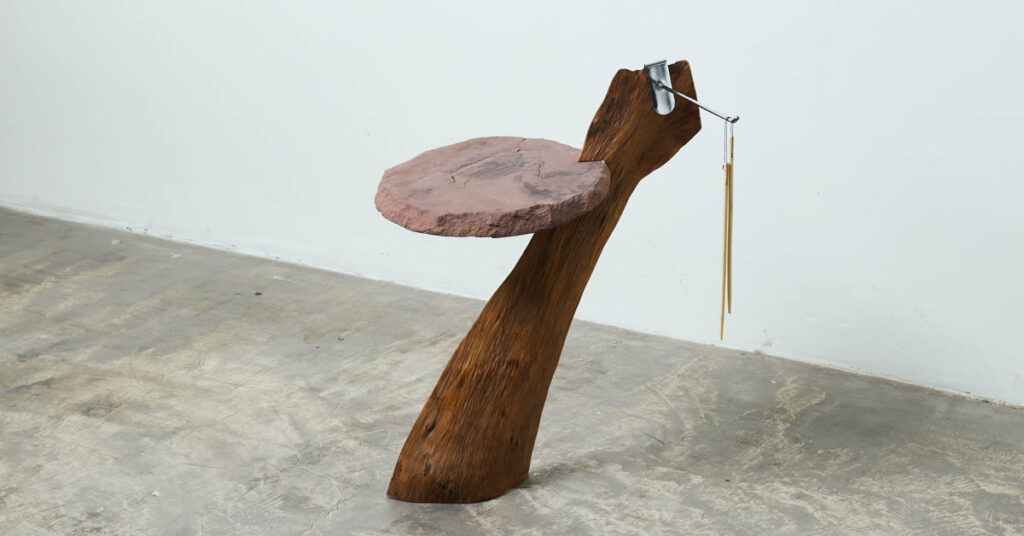 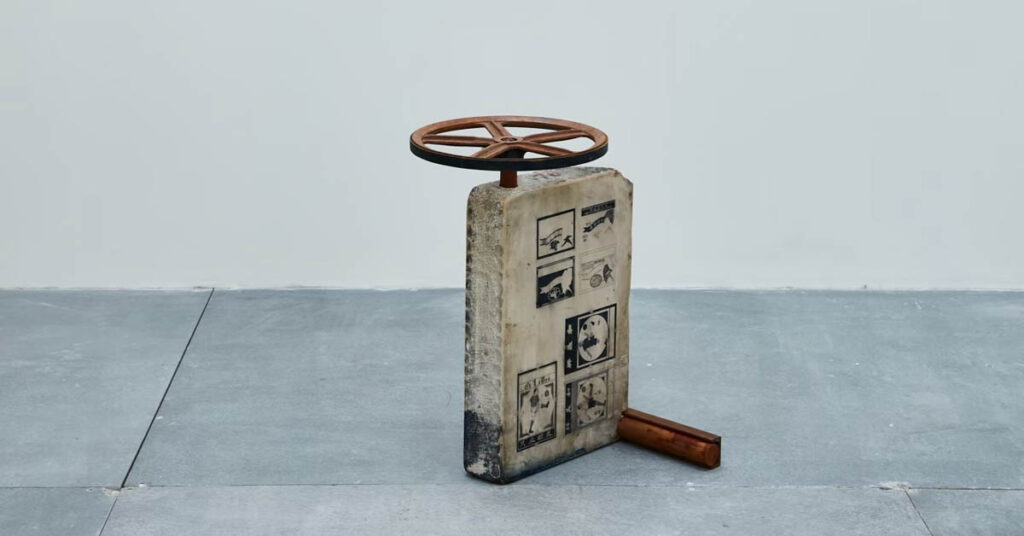 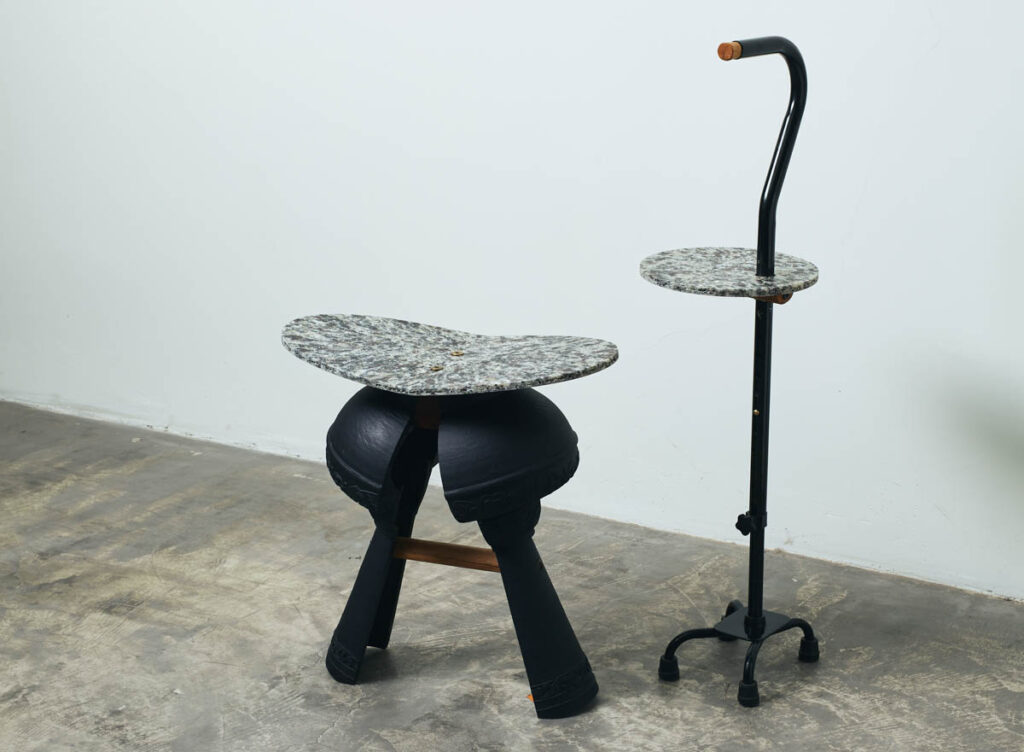 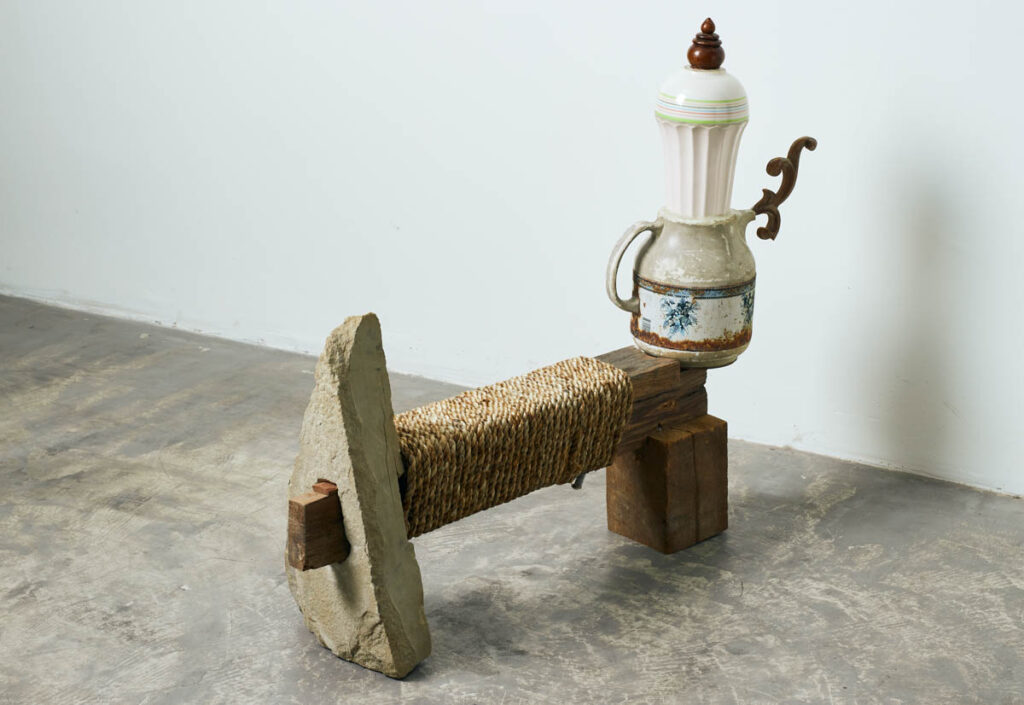 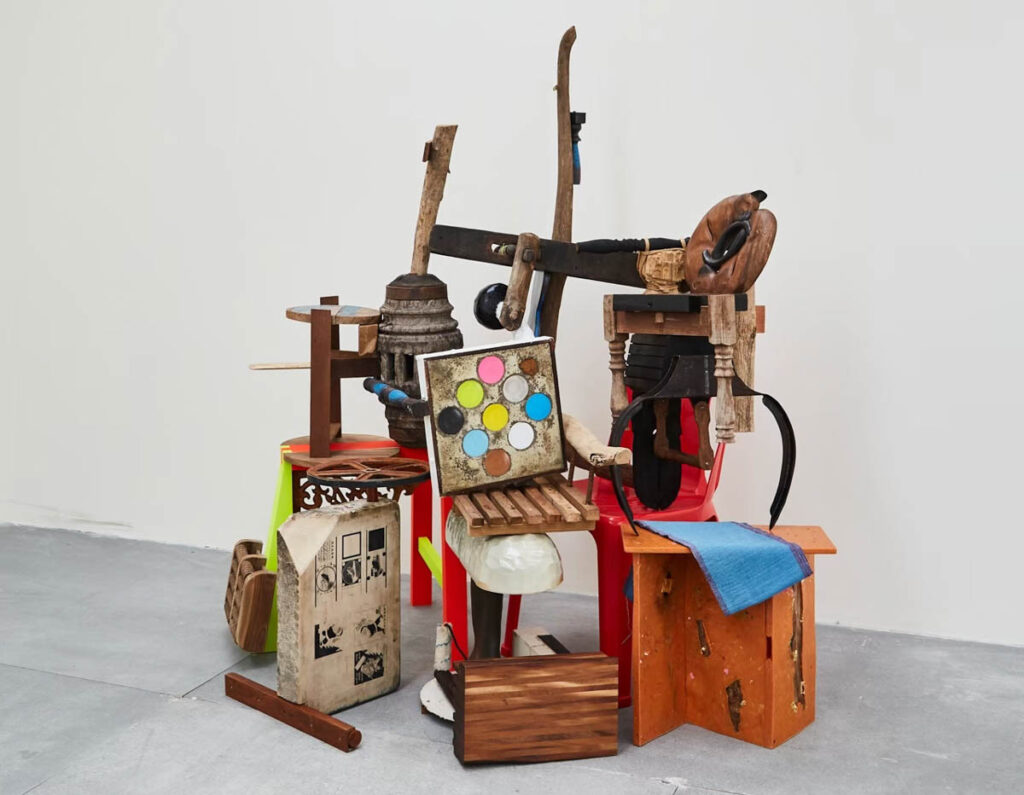 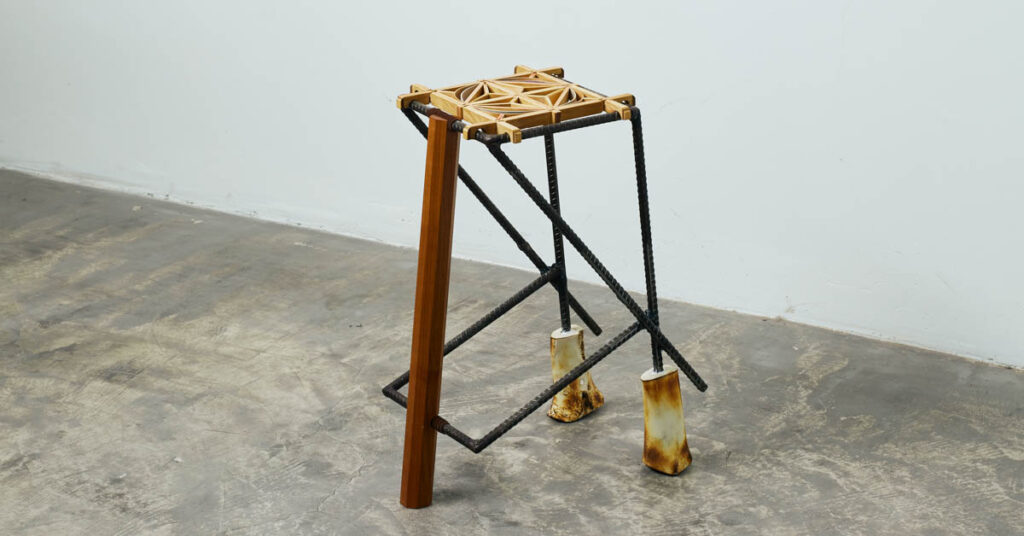 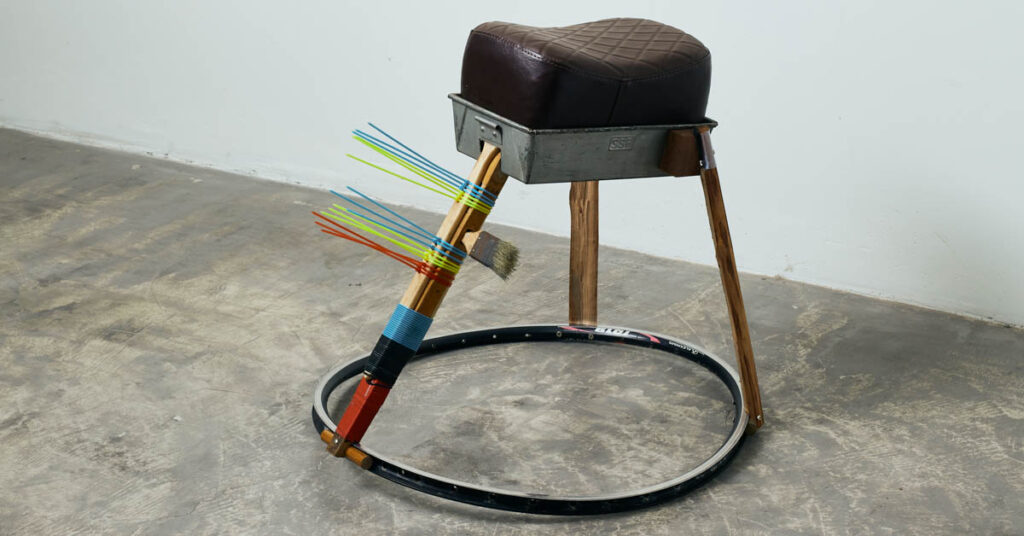 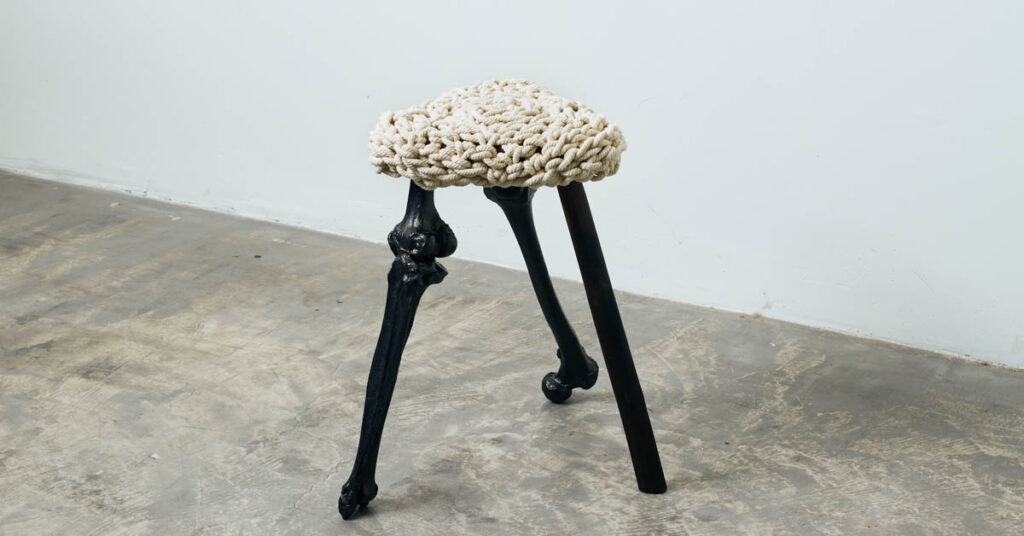 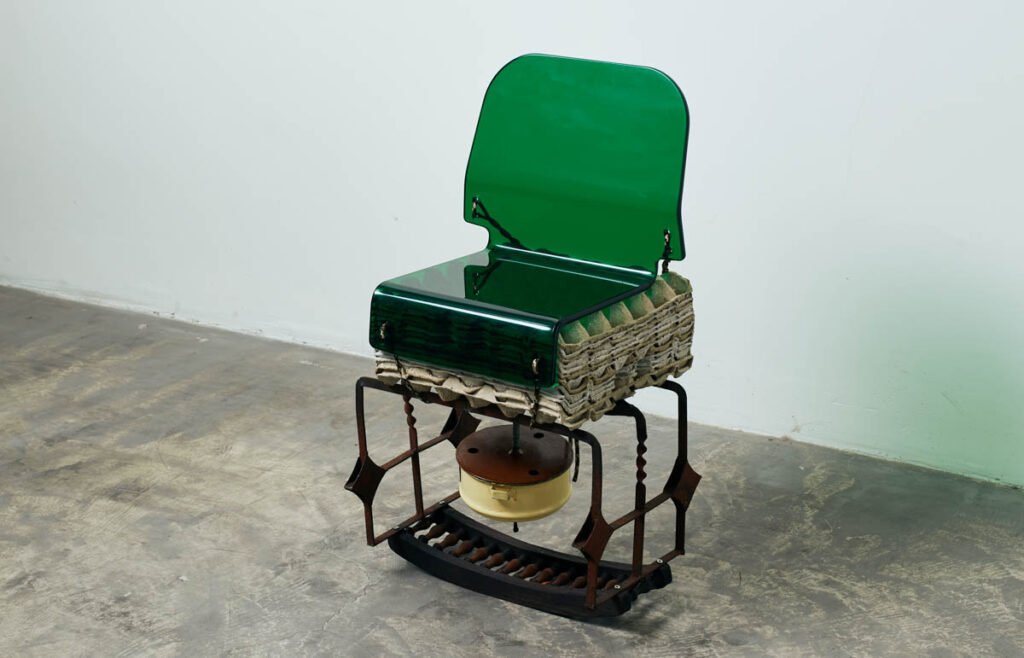 When looking at the collection one cannot help but notice how the task that seemed irritating, eventually liberated the creative process and incorporated playfulness. The voluntary act of engagement offered relief from almost any expectation. Participating in this creative exercise was a way to practice freedom, communicate with others, and deal with unexpected turns. In a world that is more conducive to anxiety than playfulness, play offered a safe space, a reprieve from the chaos, and it challenged participants to connect with a key part of themselves that gets lost in the responsibilities of adulthood by doing something imaginative, self-directed.

“Design is one of the basic characteristics of what is to be human, and an essential determinant of the quality of human life. It affects everyone in every detail of every aspect of what they do throughout each day.” said John Heskett. The humble objects became prized teachers. Strangers became friends. Unpretentious random things became furniture. The senseless became an expression of self. Together, the stools compose a creative and humorous display of modern Thai craftsmanship.

About Nanu Youttananukorn and Lidia Vajda 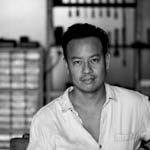 Pakphum (Nanu) Youttananukorn is an artist, designer & maker. His work varies from functional art, unique piece furniture and installations. He is the coordinator of Grains & Grams, a Thailand based collective of independent designers, artists & makers who share a common passion in wood.He is also an instructor at INDA (International Program in Design and Architecture) Chulalongkorn University. Visit republicnanu.net. 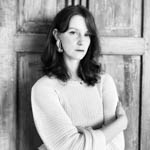 Lidia Vajda is a cultural project coordinator and communications manager. Currently, she lives in Bangkok and works as a freelancer for artists, designers and architects.

Habitat: Terracotta homes for hard-working bees
From Prao to Melbourne - Lanna culture in the world
Maker mythologies: Classical origin stories for the crafts
Can craft and design coexist in southeast Asia?
Şevket the puppeteer finds freedom in a prison cell
Julia Gutman ✿ Muses
MAOTA: Five yarn dyed colours, inspired by Aizome
Deborah Kelly: Cutting with the past to create a new order