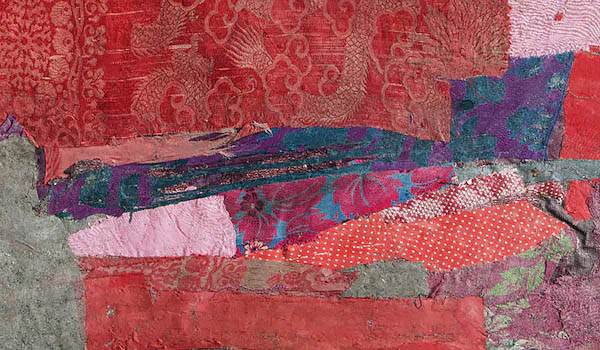 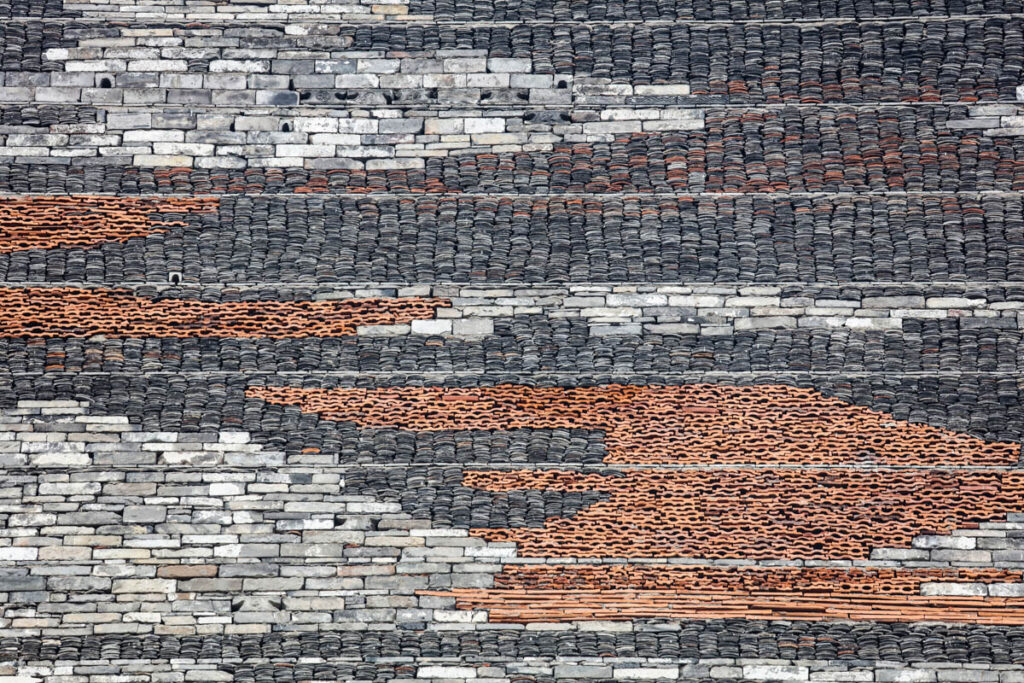 Peta Carlin finds a Chinese make-do folk craft in the work of Amateur Architecture Studio, as they attempt to keep stories alive in the debris.

The nineteenth-century German architect and champion of the crafts, Gottfried Semper (1803-1879) was once to proclaim that weaving was the foundation of architecture, indeed, that the textile arts were the basis of all the arts, from which they derived their motifs and symbols (Semper and Mallgrave, 2004, p. 113). Extending upon this theme, in a lecture on the wall in antiquity delivered in 1853, he first put forth his concept of Bekleidungor dressing, the correlation between how we clothe the body and clad the naked structure of a building. This talk departed from observations of Chinese ornamental art, in which he noted that there was much to be learned from its designs and practices, and while markedly distinct, they nonetheless shared certain correspondences with other ancient civilisations, particularly so in the approach to the adornment of both body and building (Semper and Mallgrave, 1986, p. 34).

Semper’s premise in relation to architecture and textiles, specifically in the context of China, remains as powerful today as it did at the time of its conception, correlations between Ge Ba, textile collages, and the work of Amateur Architecture Studio evidence of its potency.

Ge Ba emerged, it has been suggested, in the years surrounding the establishment of The People’s Republic of China in 1949, or conceivably even earlier, with the practice widespread in rural areas and not limited to any particular ethnic group, locale or region (Marks, 2017, p. 53). While its origins remain unclear, certain correspondences are nonetheless to be discerned with Japanese Boro textiles, not only in relation to the reuse and composition of fabric scraps (minus, however, the distinctive sashiko stitching), but also in terms of traditional Japanese aesthetic principles including mottainai: regret in the face of wastage (Boro -The Fabric of Life, 2013), or more simply put, an appreciation of the value of materials and things in general. 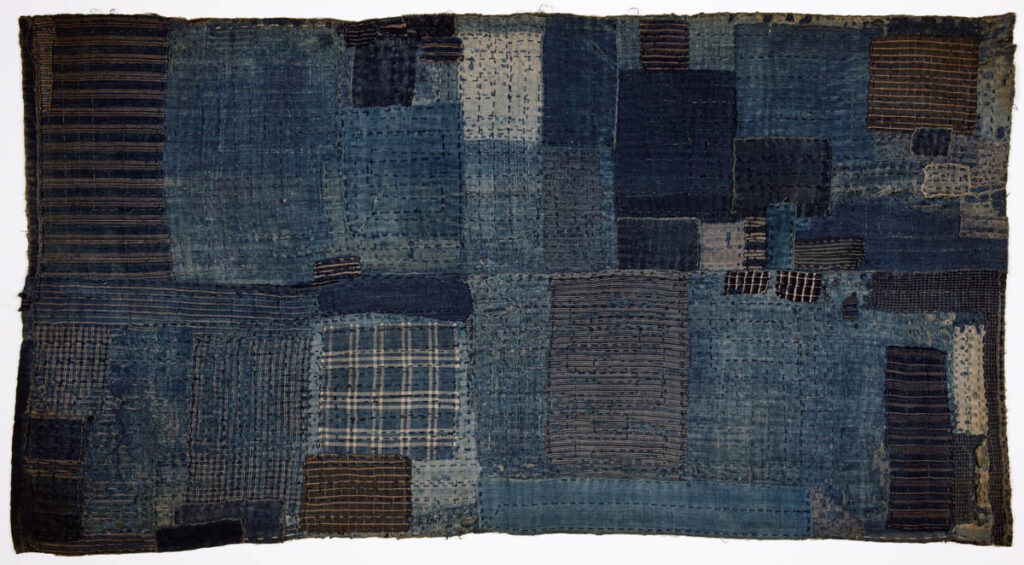 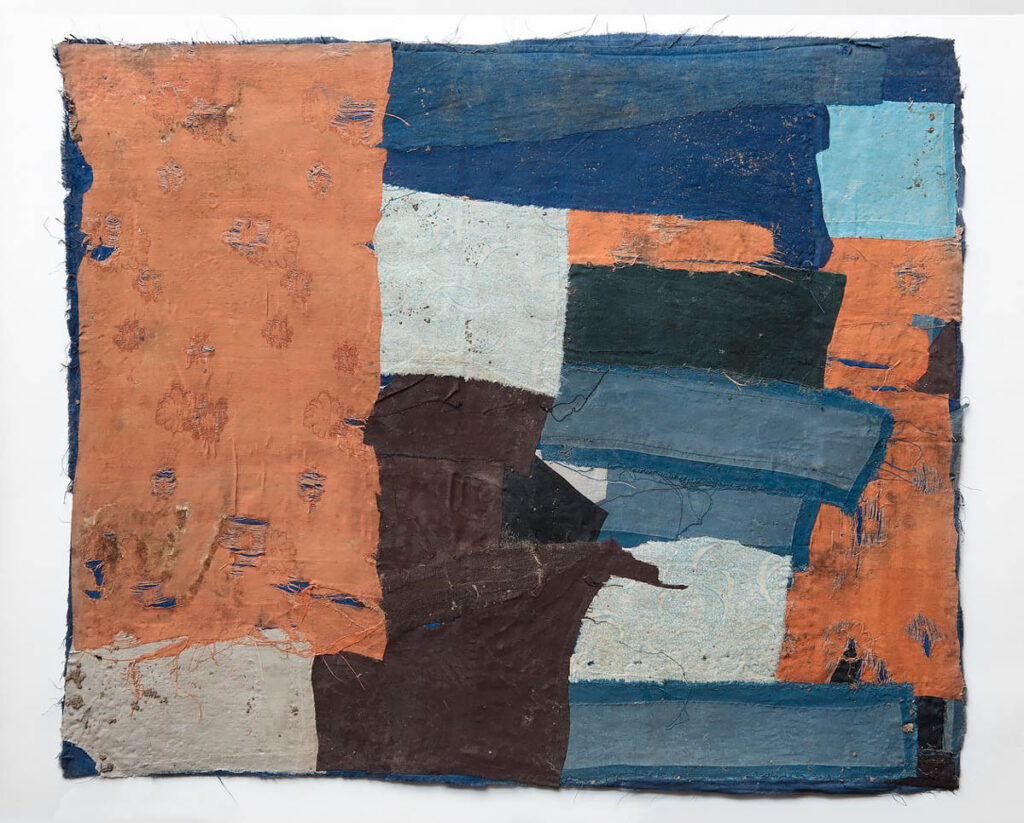 In the West, Ge Ba first came to light through the French art collector and trader, François Dautresme’s (1925-2002), happenstance discovery of an example in a cleaning supply store. The collector was fascinated by the beauty of objects from everyday life and amassed a vast collection of textiles and other artefacts over many years.

Measuring approximately 60 x 40 cm, these compositions are composed of between ten and fifteen pieces of fabric, the term itself said to mean “layers” (Kim, 2019)1.Ge Ba textiles, it would seem, are rarely discussed in China with scant academic references available, and after an initial survey, the official terminology in Mandarin has yet to be found. In general, however, these textiles are referred to as 纺织拼贴, which means “textile collage.” Ge is represented by 葛, a “textile material” or 格 “grid” or “pattern” and Ba 巴 means “patch.” It has been suggested that 格巴 “patch of patterns” represents the concept best because it is closest to the term for collage and because it expresses more closely the process in which the textile collages are made. With my thanks to Yurui Li 李禹锐 for his research and advice on this matter. with remnants sourced from all manner of scraps: threadbare garments, tattered fine embroideries and remainders of then contemporary cloths from the Maoist era (Marks, 2017, p.53).

Laid flat and stuck together with rice glue these surfaces were to be repurposed again and cut to serve as the soles of shoes or tailored to form the lining of new garments, their purpose not display but to operate as hidden interfaces.

Despite their often short life as abstract compositions, pride in the arrangements of the fabric stuff was nonetheless taken, with local women gathering to judge the beauty of the arrangements, production taking place in their homes (Marks, 2017, p.53). Contemporaneous with the paintings of American Abstract Expressionists, this folk art appears thoroughly modern, the externalisation of the inner life of its artists bearing certain affinities with the afterlife of materials. 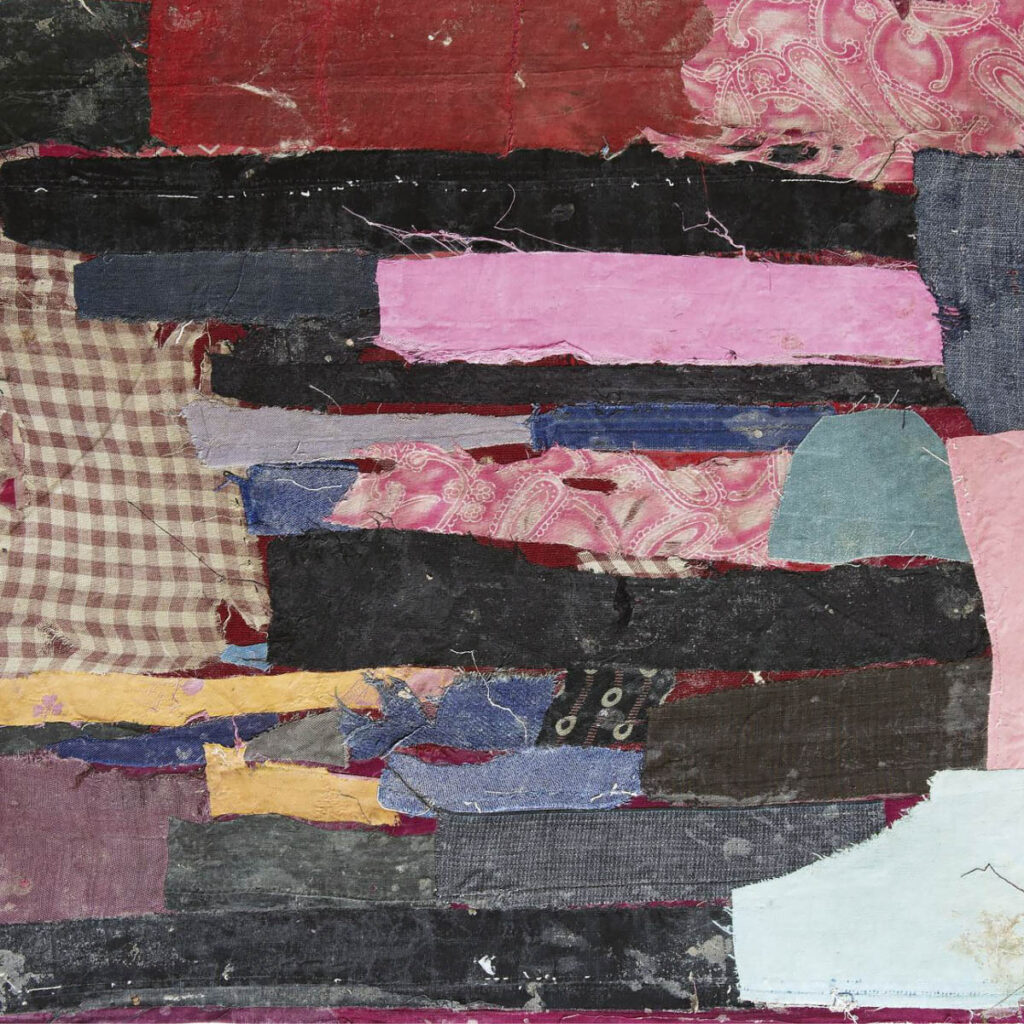 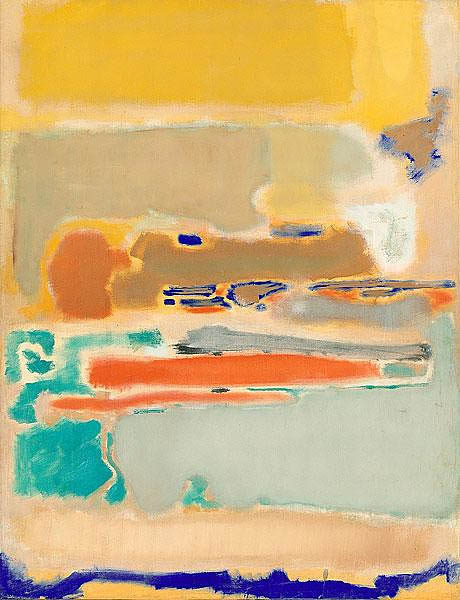 In the rubble of an area of Ningbo, the Yinzhou District, razed for the construction of a New Manhattan, Pritzker-Prize winning architect Wang Shu 王澍 was to discern traces of beauty, his practice Amateur Architecture Studio, established with his wife Lu Wenyu 陆文宇 in Hangzhou in 1997, winning the competition for the design of the city’s new history museum.

The site, once home to approximately 30 villages, now largely erased of memory, remained nonetheless generative and replete with potential. For, amidst the debris, traces were to be found, with bricks from the Ming and Qing Dynasties (1368 – 1644 and 1636 – 1911 respectively) and even earlier discovered. These were reclaimed and provided much of the fabric for the facades and walls of the new building. Stripped of memory, the walls not only returned to former residents and locals the vestiges of their living past it but also revived a waning craft tradition. This technique, Wa Pan 瓦爿, literally meaning “tile,” was indigenous to the area and traditionally used by local farmers in the wake of destructive typhoons. All that was salvageable was gathered, sorted and reused to build their dwellings again. In the case of the museum and earlier projects, such as Xiangshan Campus of the China Academy of Arts in Hangzhou (2004, 2007), photographs were used to prompt the builders’ memories, many having to relearn the craft as it had since been forgotten (McGetrick, 2012).

The building itself takes its form from nature and the multiform idea of a mountain. Mountains are long central to the Chinese way of life, with their Song Dynasty (960-1279) depictions a subject of deep fascination for the architect and enabling him to rethink the relationship between architecture, landscape, and surrounds (Shu and Luo, 2019, pp. 11-15 ). 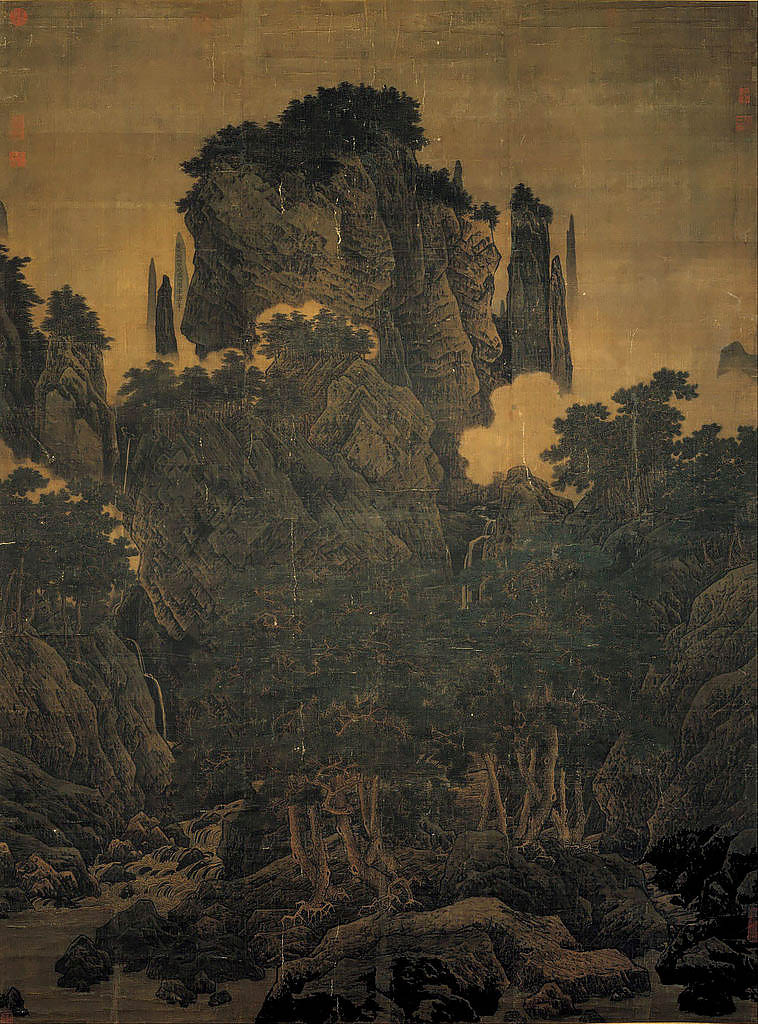 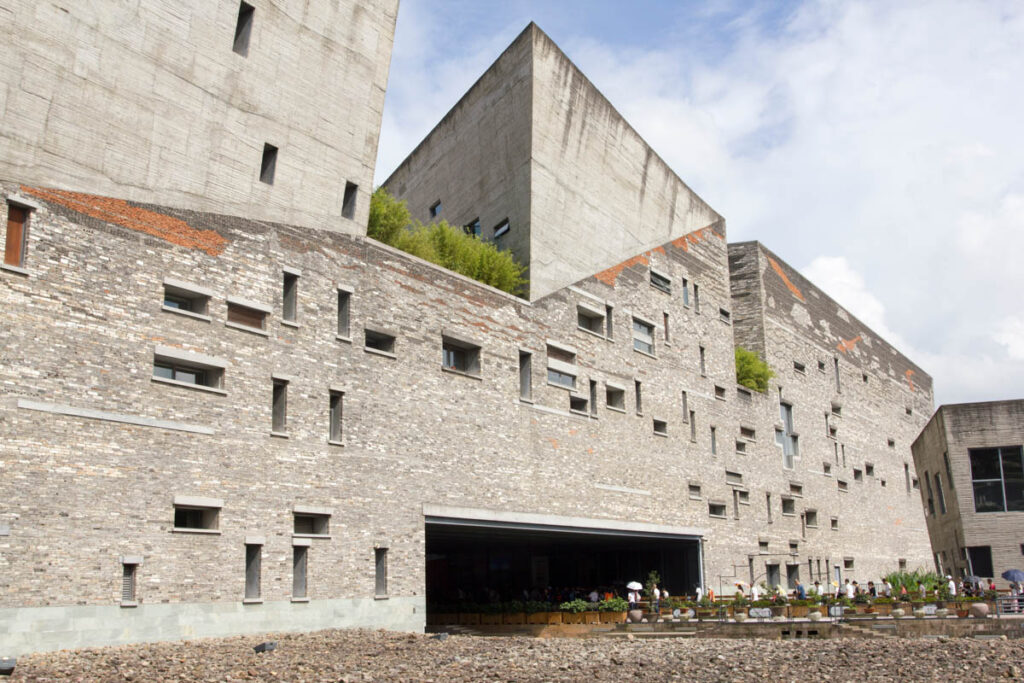 Architecturally classifying their structure whilst taking into consideration the facture of the surface, the flow of brush strokes and the drive of calligraphic inscriptions, spaces within the building were further conceived of as “valleys, caves, lakes” (McGetrick, 2012). 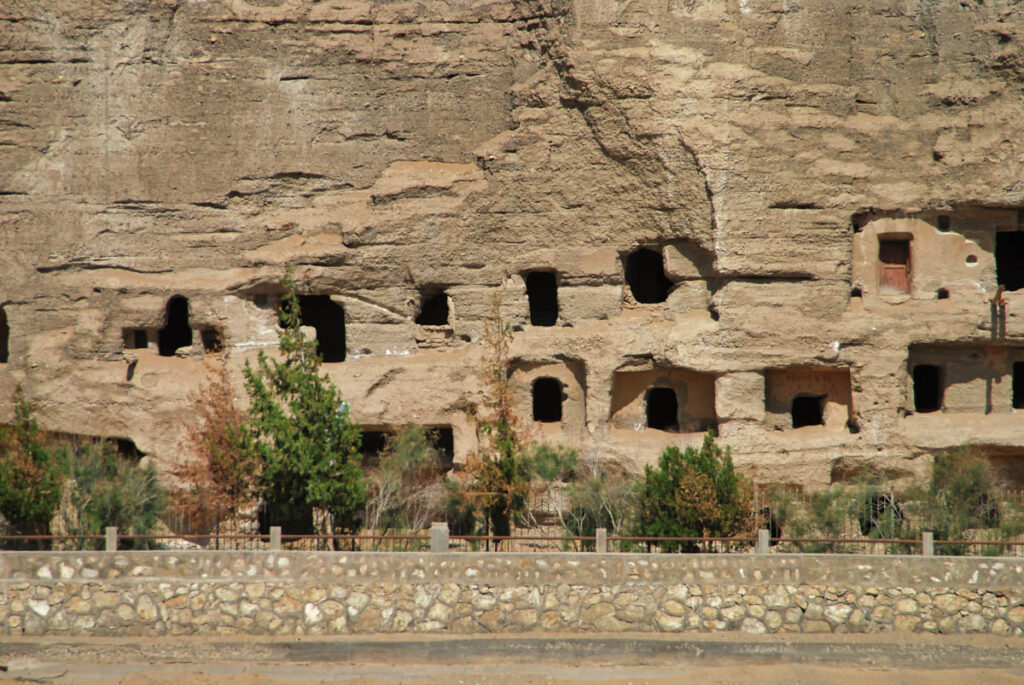 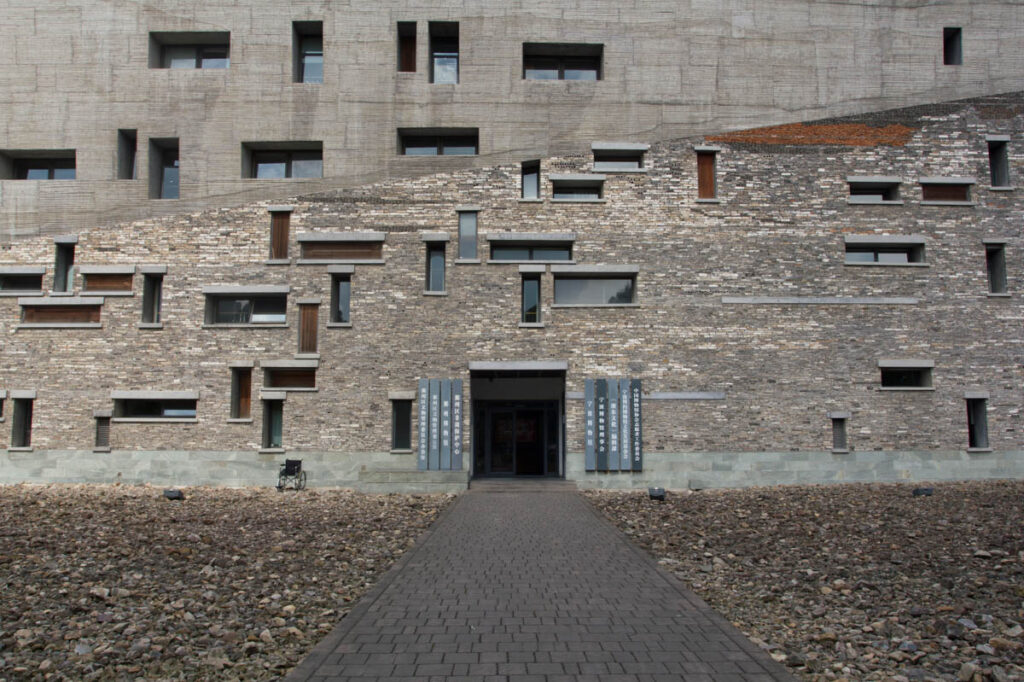 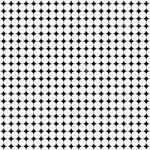 Peta Carlin is an artist and essayist. She holds a PhD, along with a Bachelor’s degree in architecture, and an Honours and a Masters degree in fine art imaging. Her work explores architectural themes and concepts through the practices of image-making with a view to collaborative exchange, and engages more broadly with architecture’s interaction with the other arts, with their shared histories. Invested in the poetics of place, her work seeks to bring forth the relational nature of the world in which we live. Peta is currently an Associate Professor in Architectural Design at Xi’an Jiaotong-Liverpool University, Suzhou, P.R. China